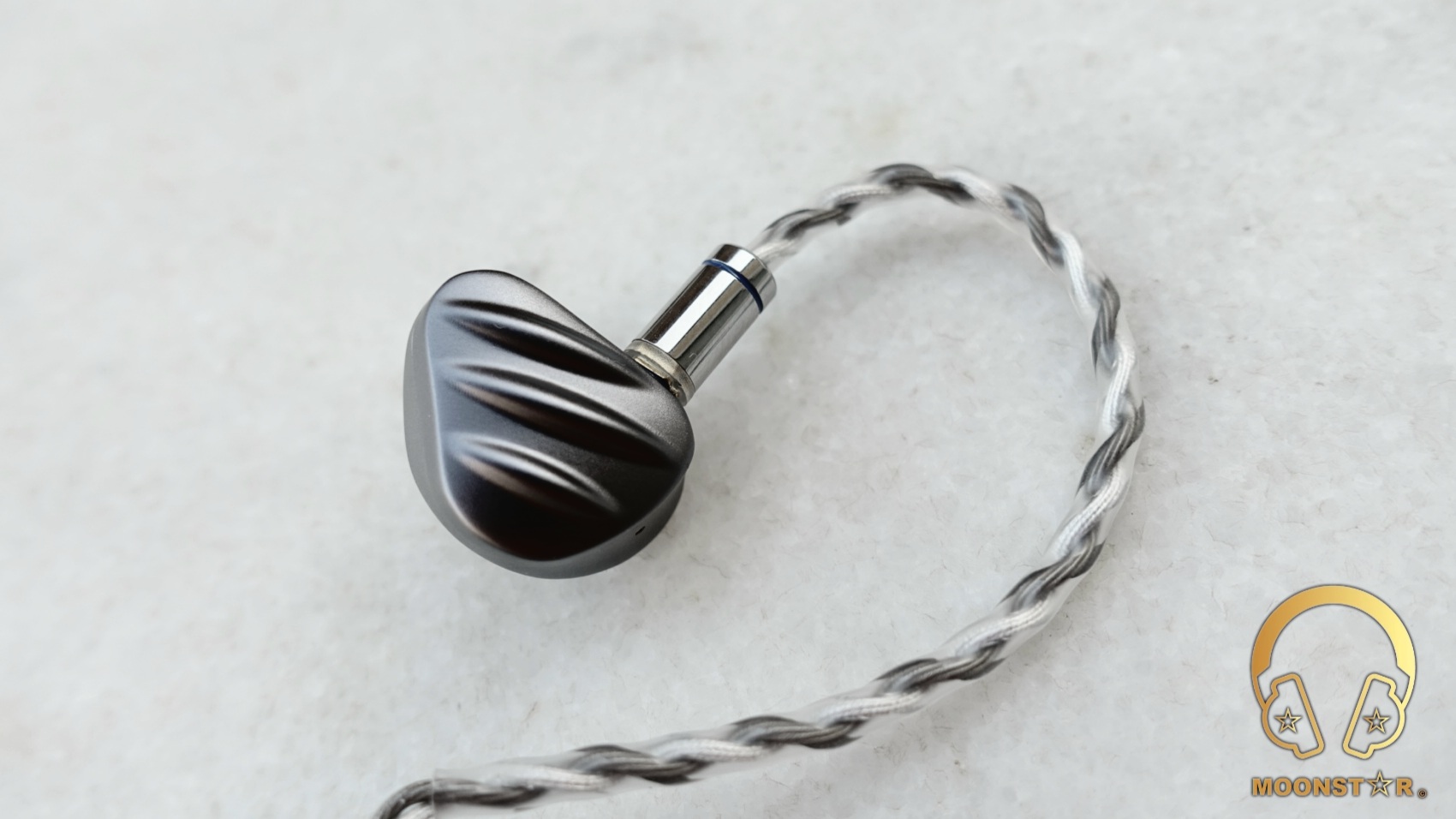 BGVP is a Chinese brand founded in 2015 and is the subordinate brand of Dongguan Nengjiang technology limited company. BGVP mainly produces and customizes various high-end HIFI earbuds, earphones and other electronic products. BGVP has also introduced new products such like TWS earphones and Electrostatic IEM’s this year.

The BGVP NS9 is a Hybrid In-Ear Monitor that features 7x Balanced Armature Drivers + 2x Dynamic Drivers per earpiece, which is a pretty high count for a IEM with a relative small monitor size/shape. 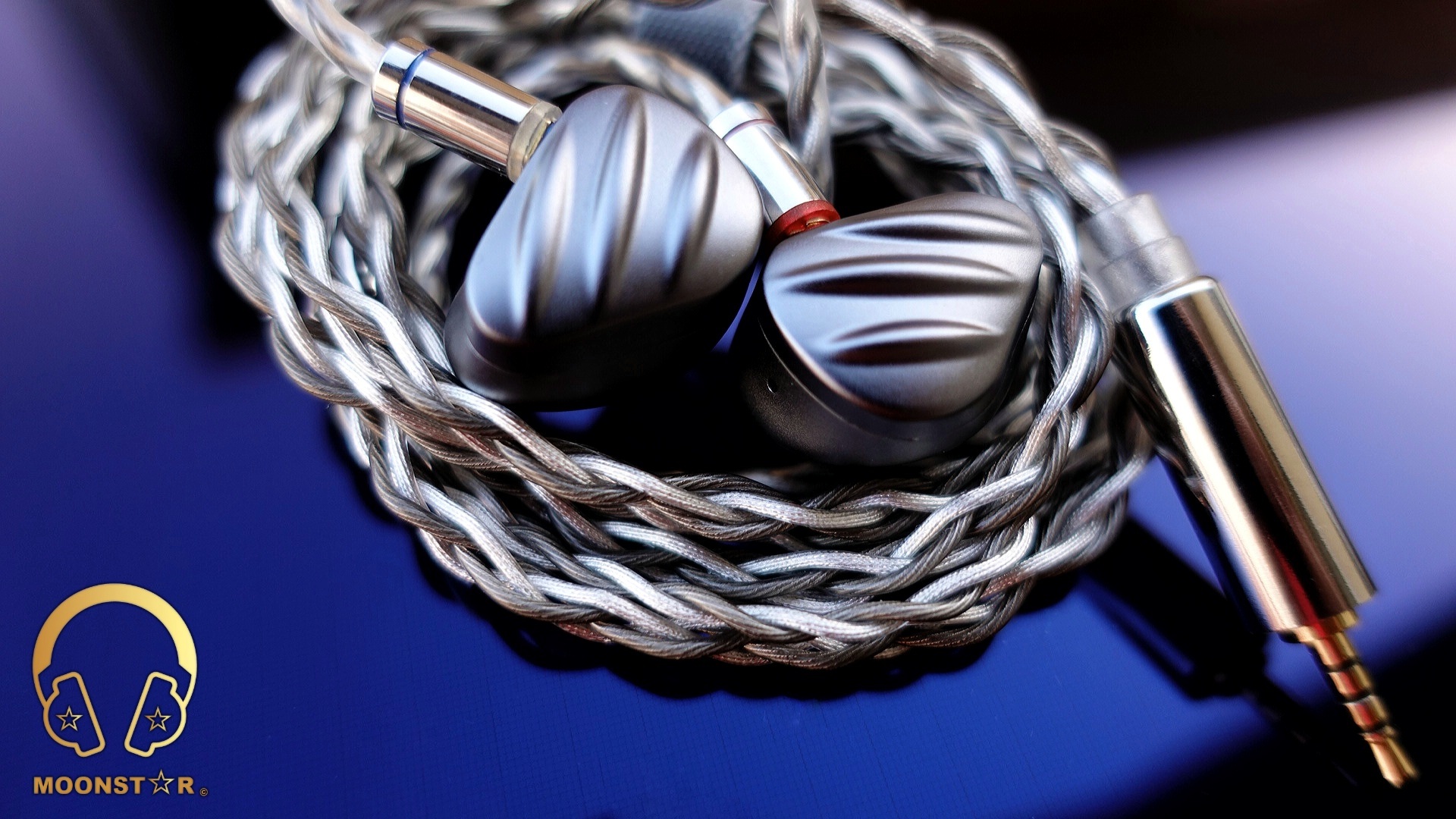 I would like to thank BGVP for providing me this sample via HiFiGO for review purposes. I am not affiliated with BGVP and/or HiFiGO beyond this review and all these words reflect my true and unaltered subjective opinions about the product.

The actual price for the for the BGVP NS9 is about 169,00 USD. More information’s can be found under the link below;

The BGVP NS9 came in a rectangular black box that has a cardboard sleeve in white color that features the illustration of the product along with some product related brandings. 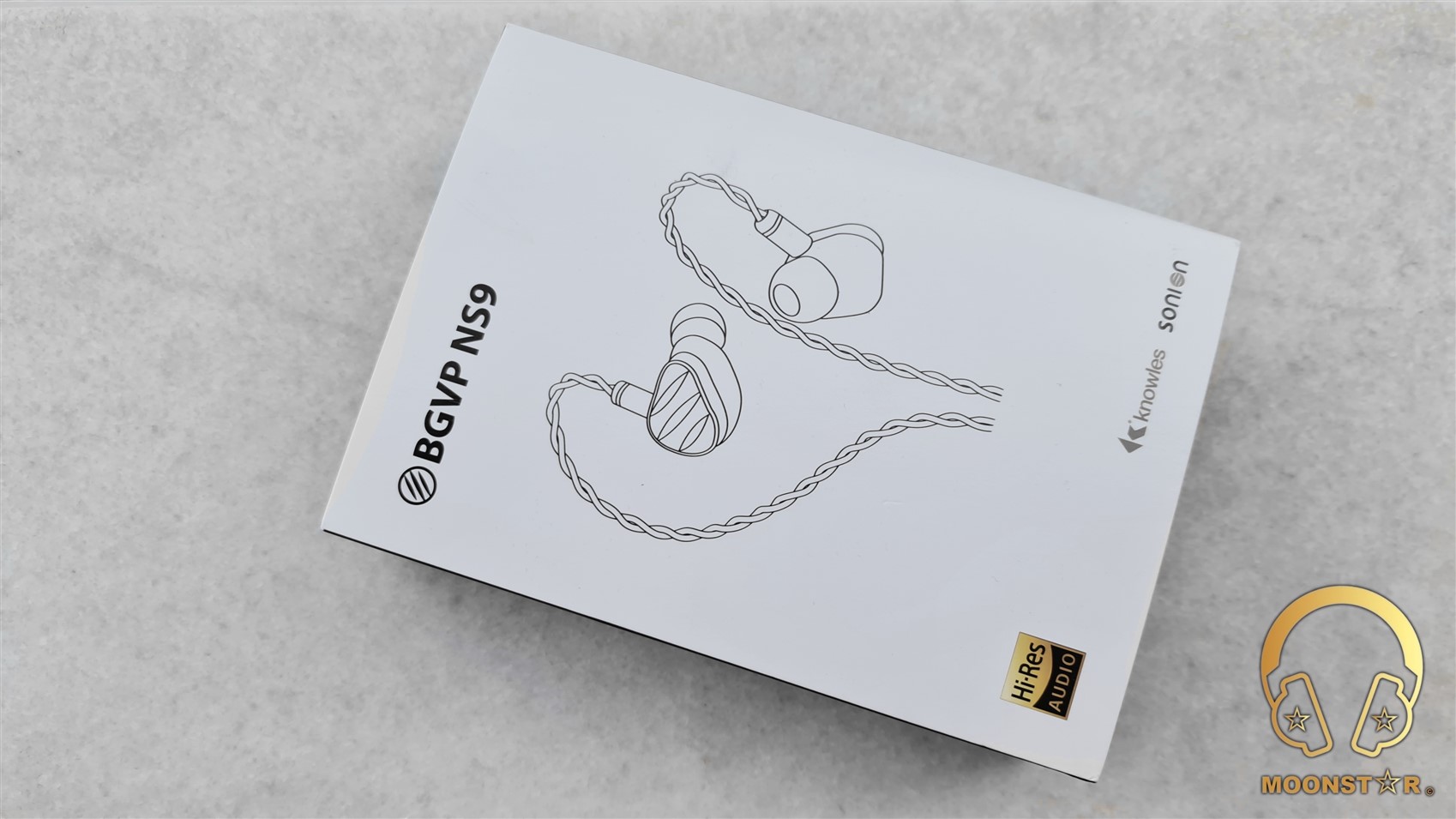 This box of the BGVP NS9 comes with the following items/accessories: 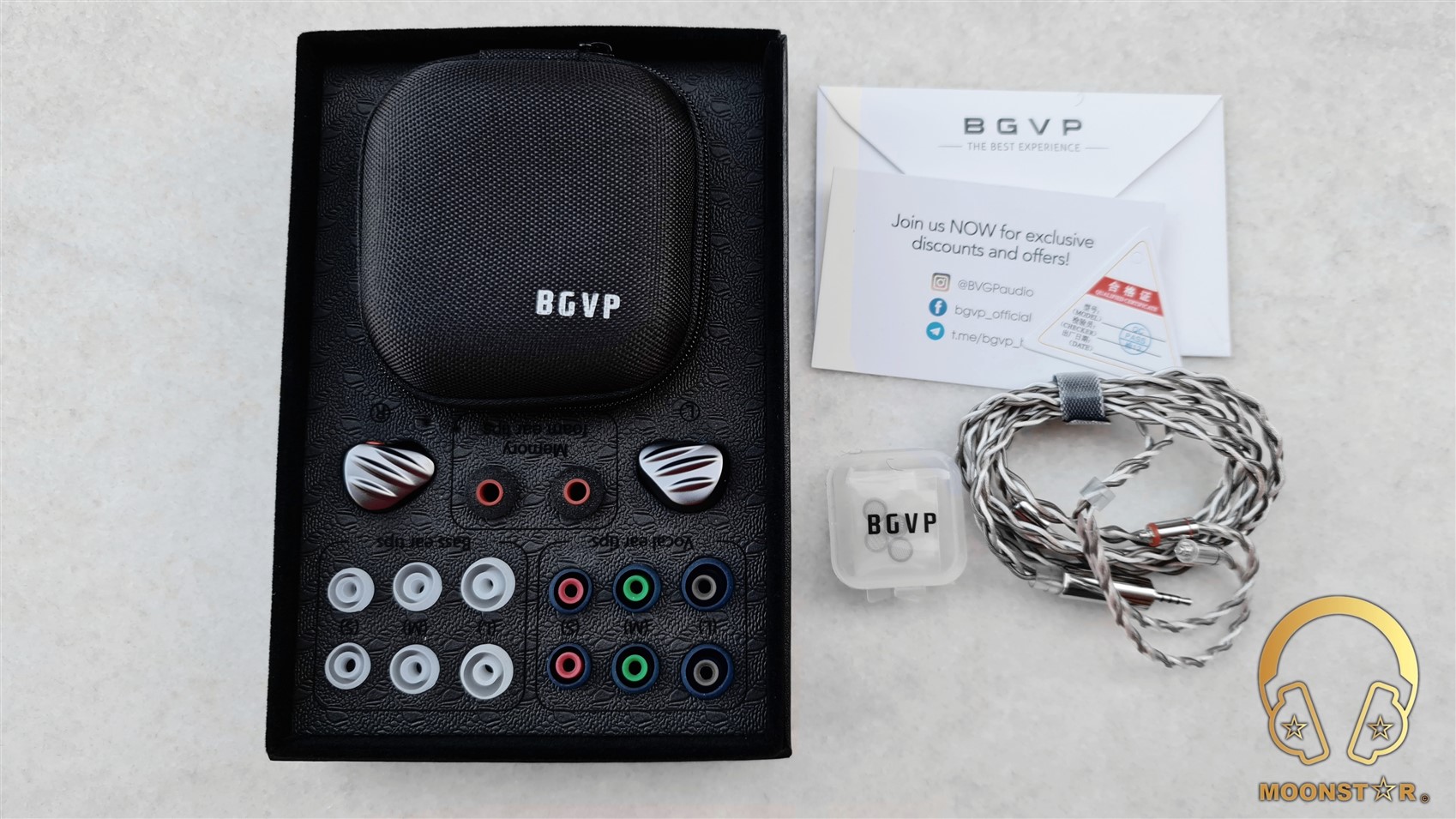 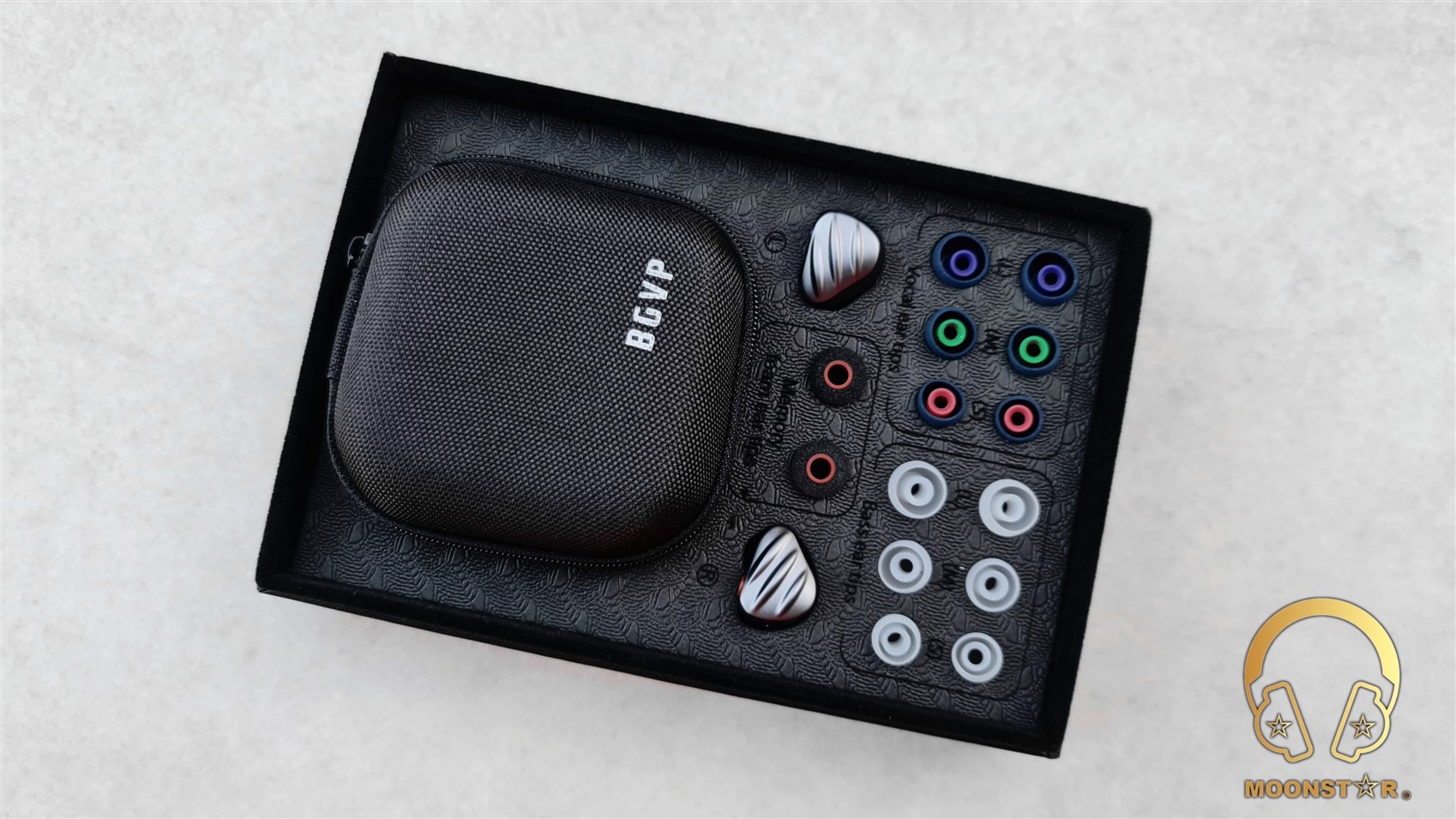 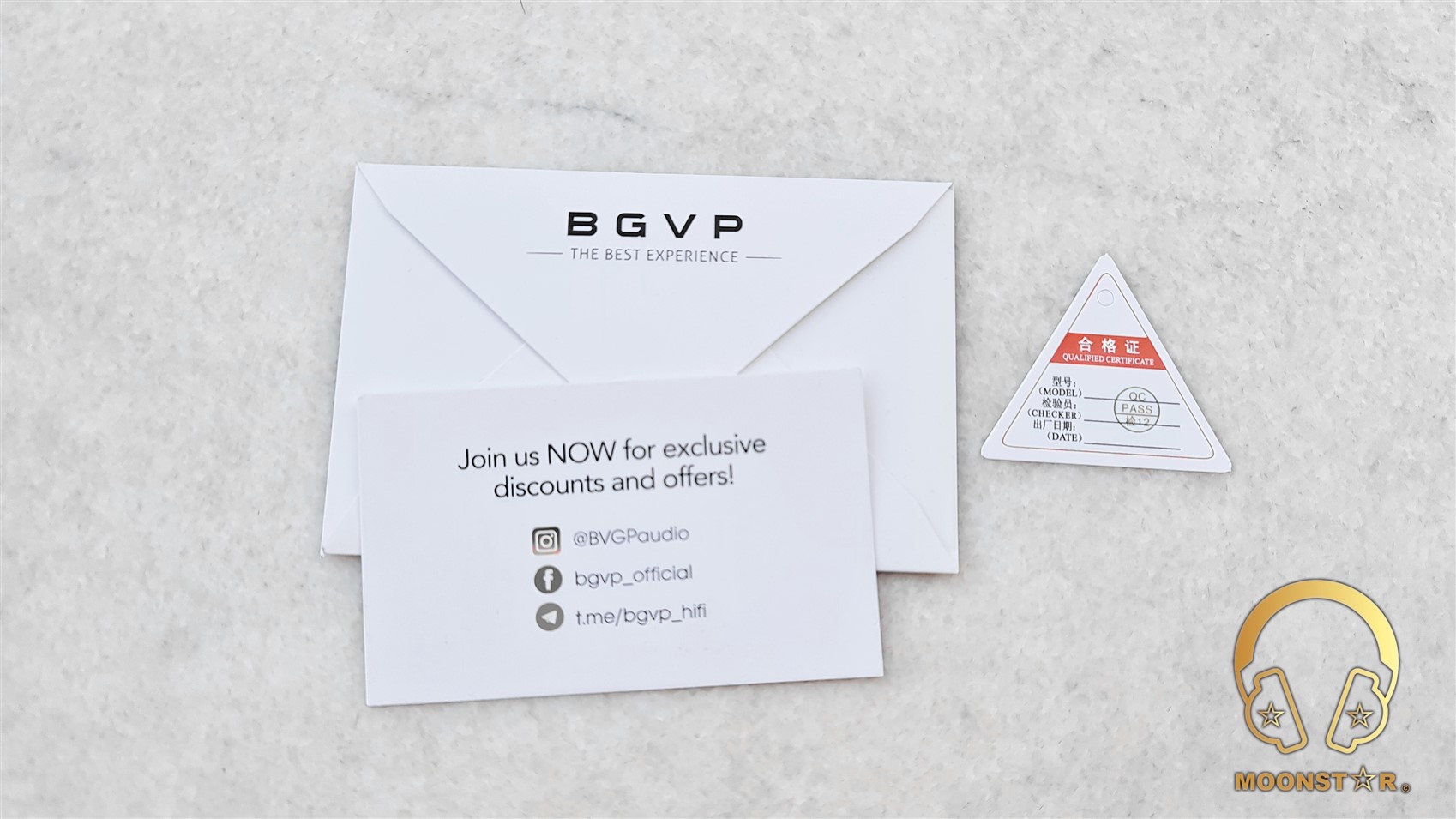 The faceplate of the monitors has a form of a wave or claw that reflects the form of the BGVP brand logo. 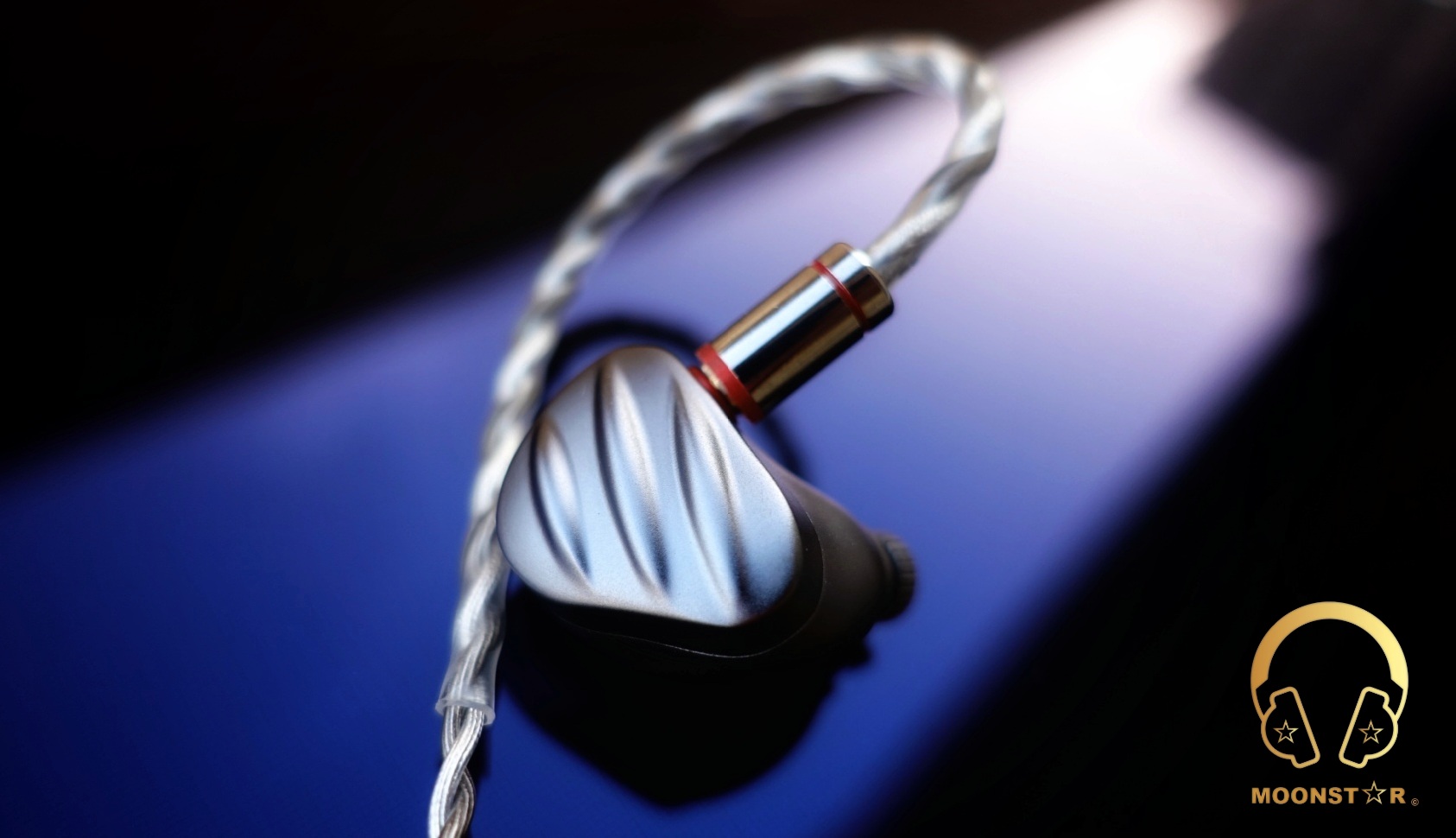 The inner surface fits perfectly to my average sized concha, which features a small vent/opening and the sound nozzle. 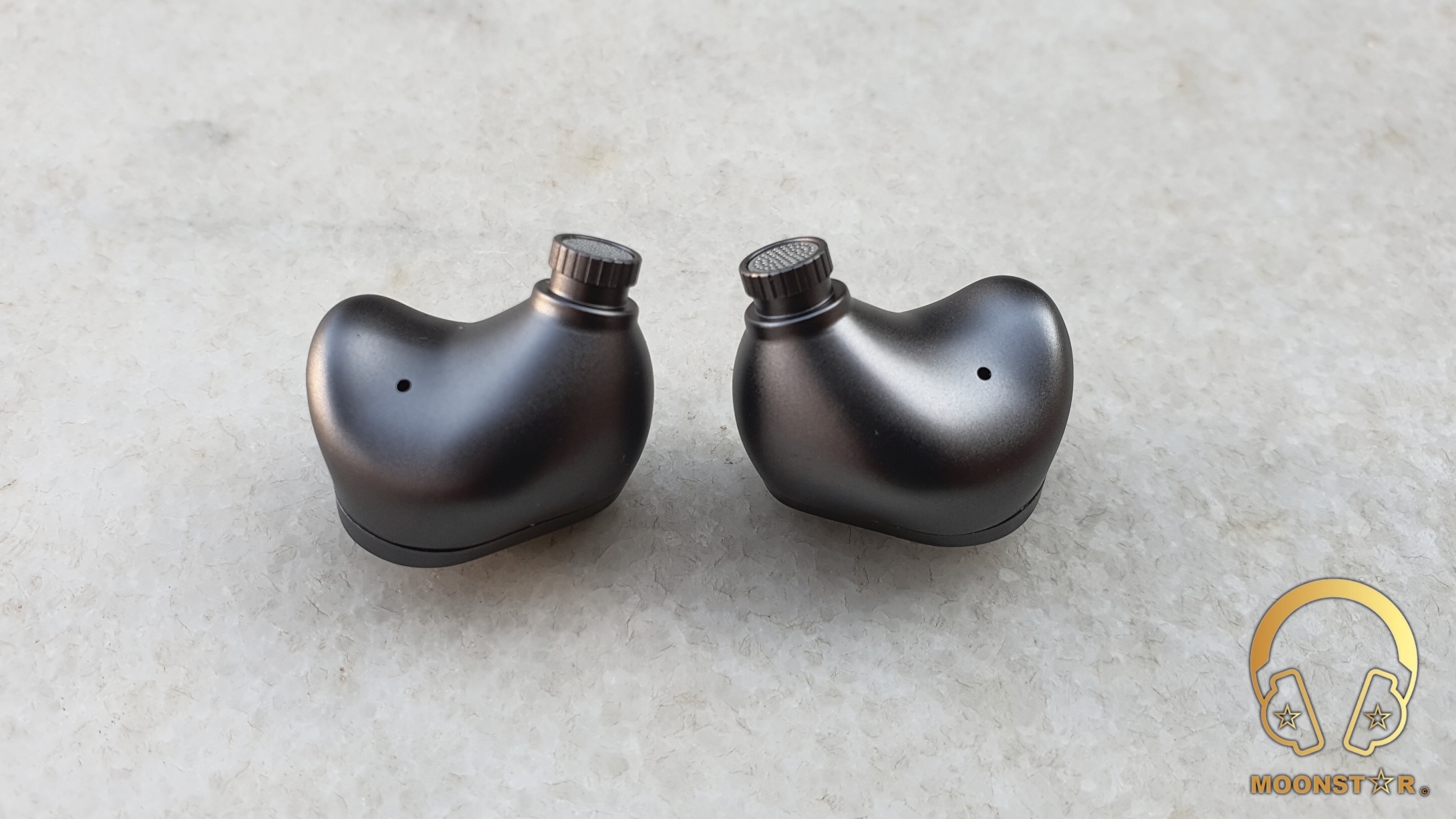 The sound nozzle is fairly short and comes preinstalled with one of the three interchangeable sound tuning filters. 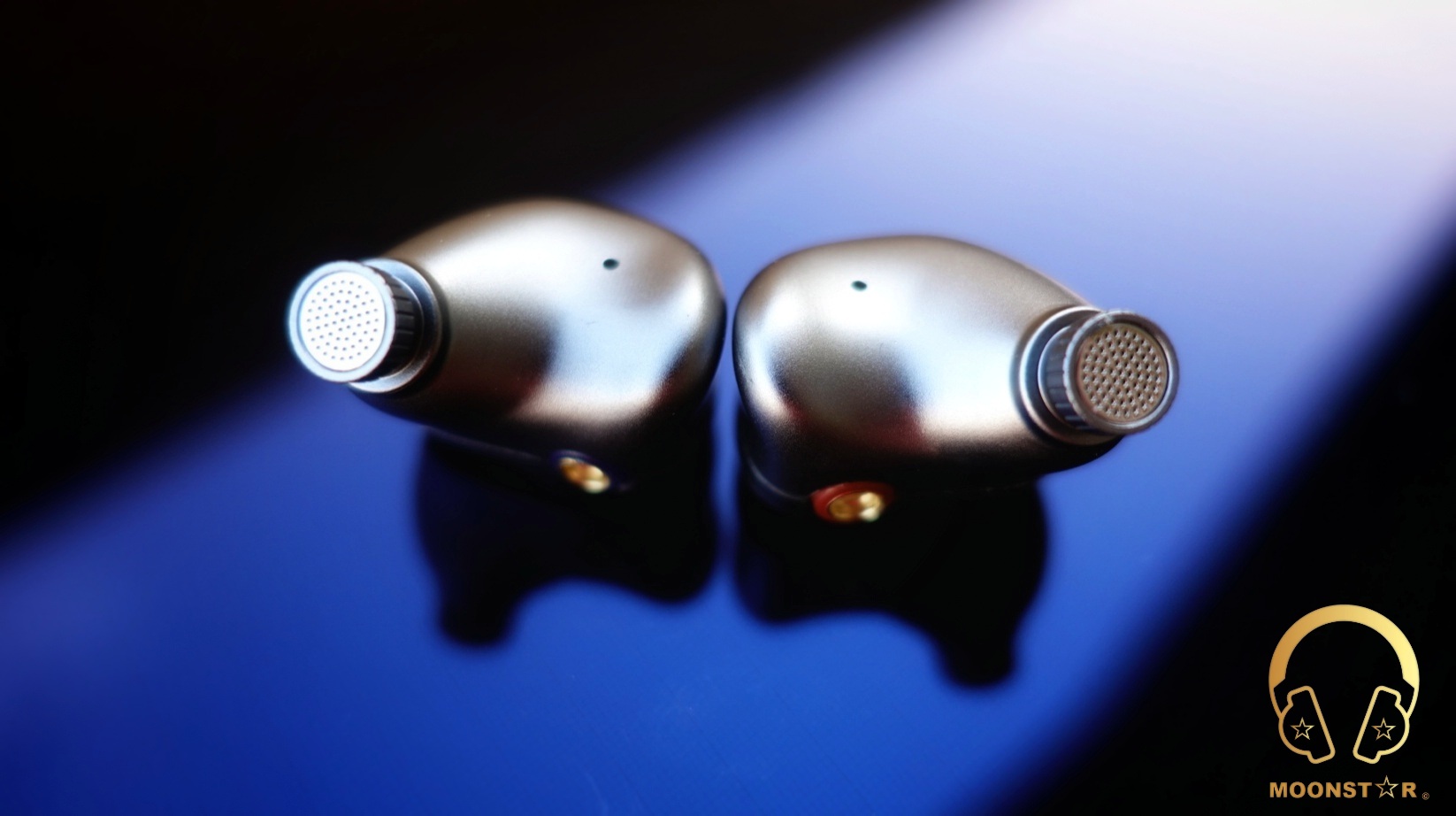 The sound tuning filters do have different sizes of openings and do also prevent the insertion of small particles like dust or earwax. 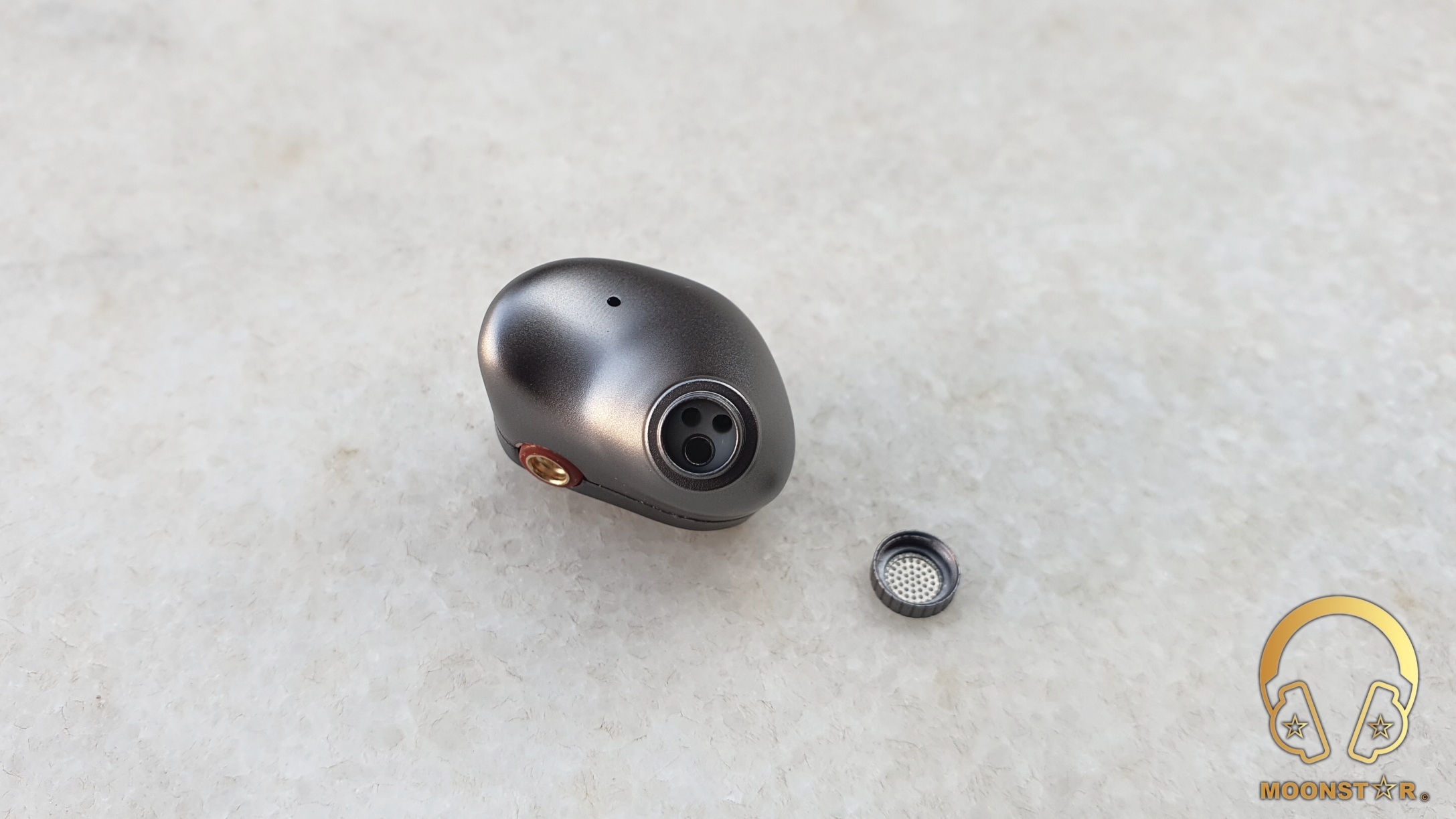 On the top of each monitor shell is a MMCX (Micro Miniature Coaxial) female connector to connect it with the detachable cable. 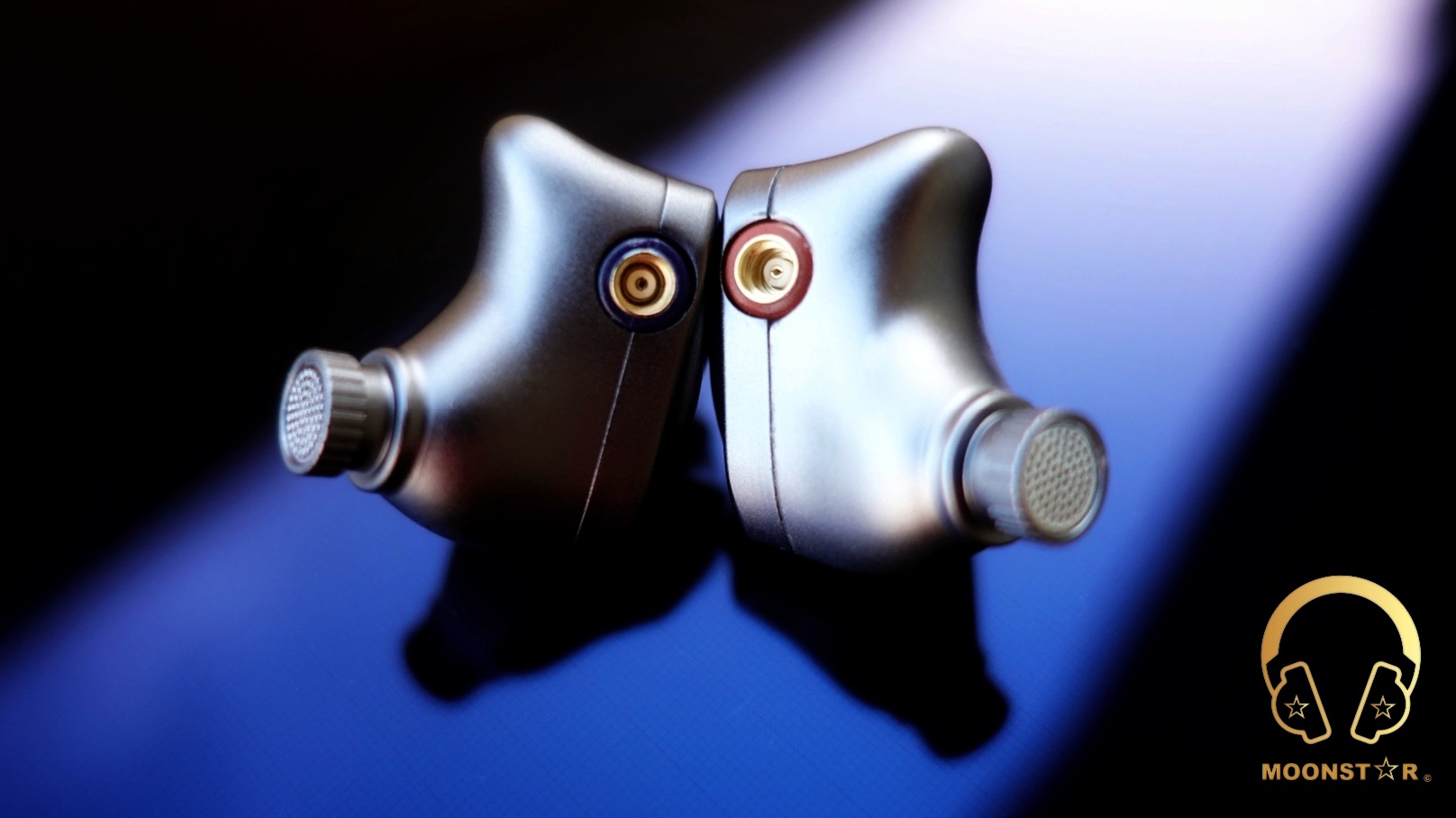 At the rear side of the monitor is a second opening fro the dual dynamic drivers. 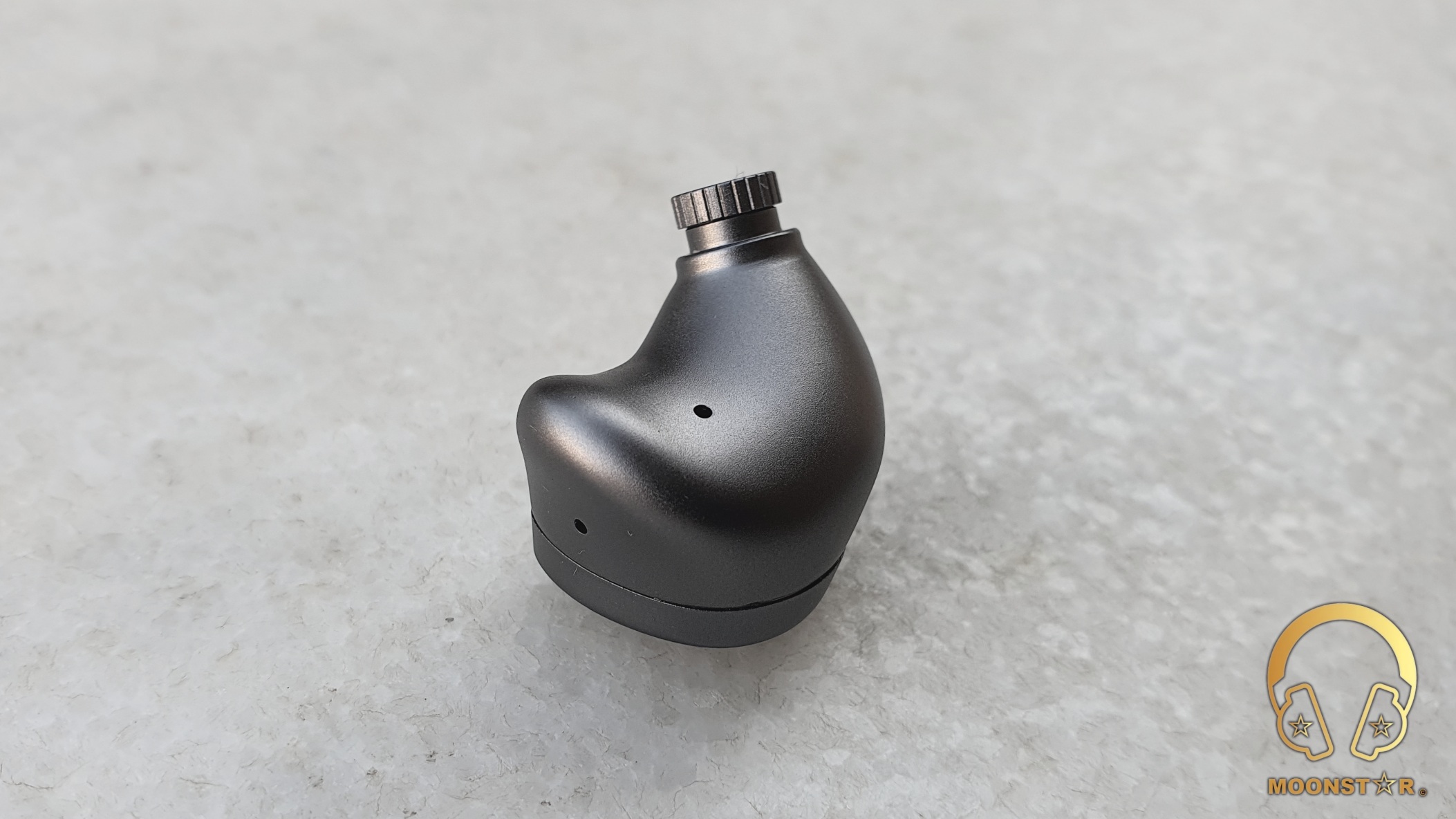 The monitors are pretty lightweight and do have a very robust build quality, which are available in three different colors that are Black Gold, Starry Blue and Space Grey like my review unit. 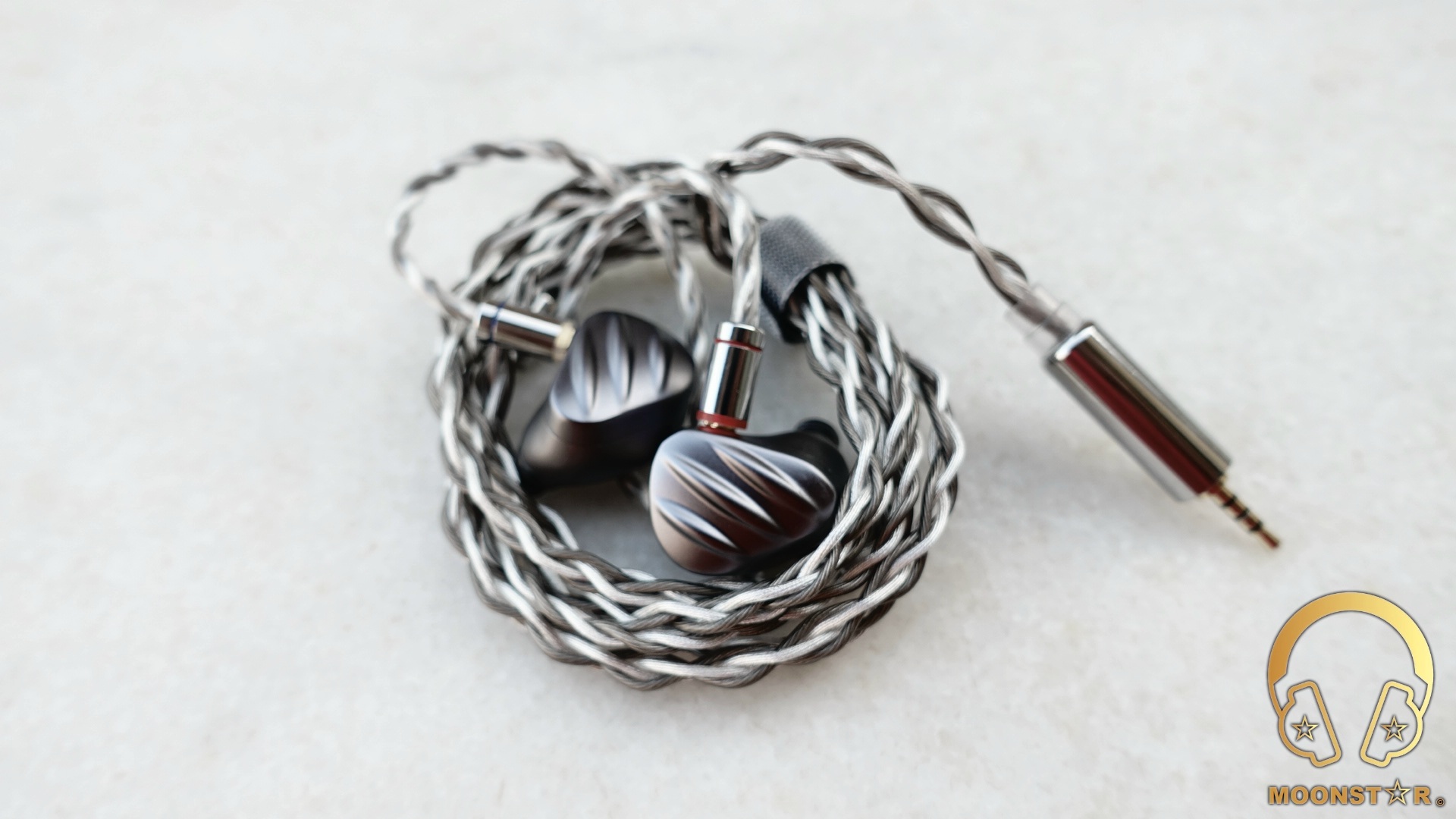 Each of the MMCX male connectors do have a metal housing in silver color with red (right) and blue (left) ring indicators. 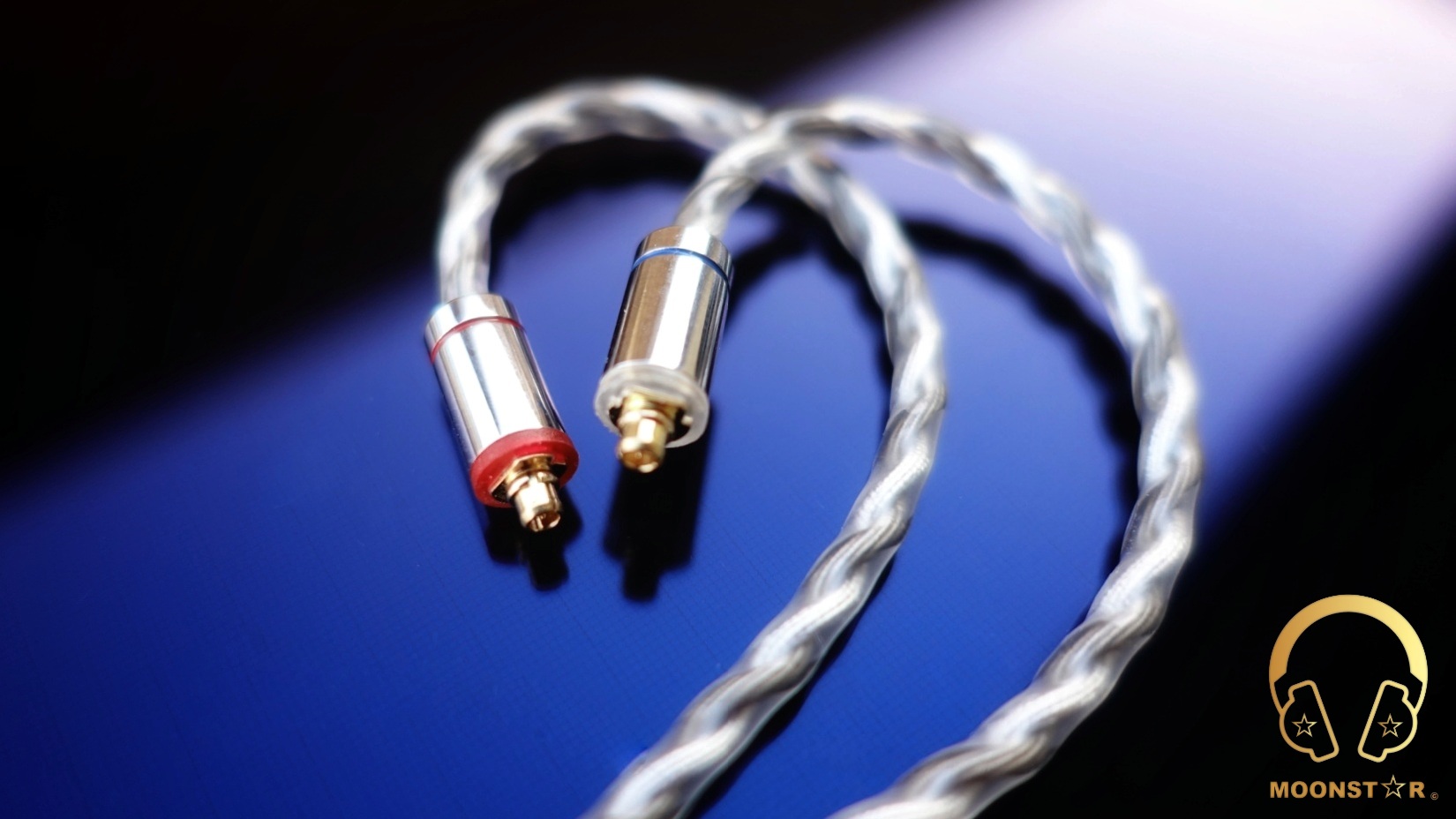 The cable sports heat-shrink ear guides, which offers additional comfort on the go.

This cable features also a metal Y-Splitter in silver color and a transparent plastic chin slider in from of a marble. 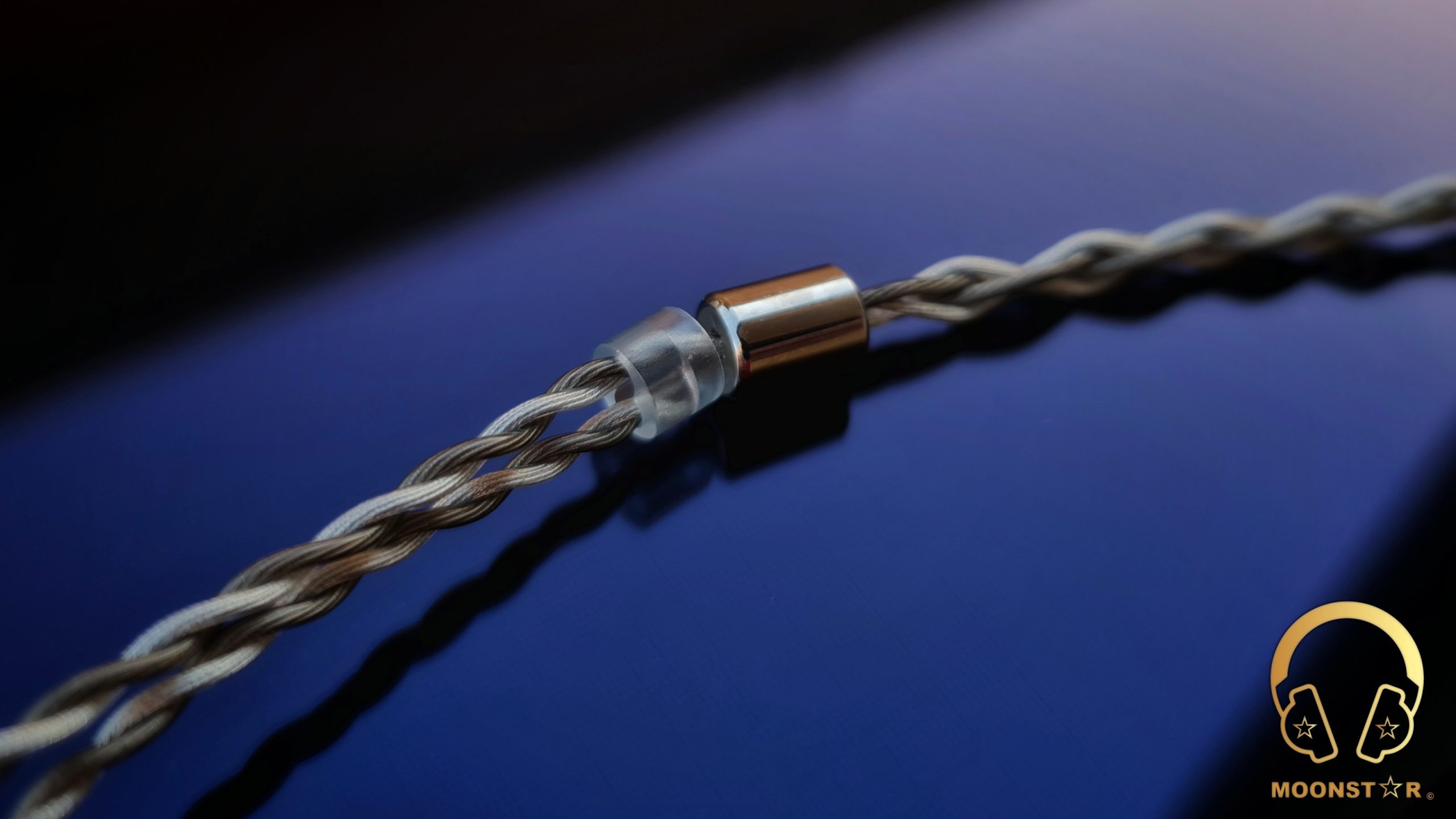 The 3.5mm headphone jack has a straight profiled metal housing with a plastic strain relief for extra protection. 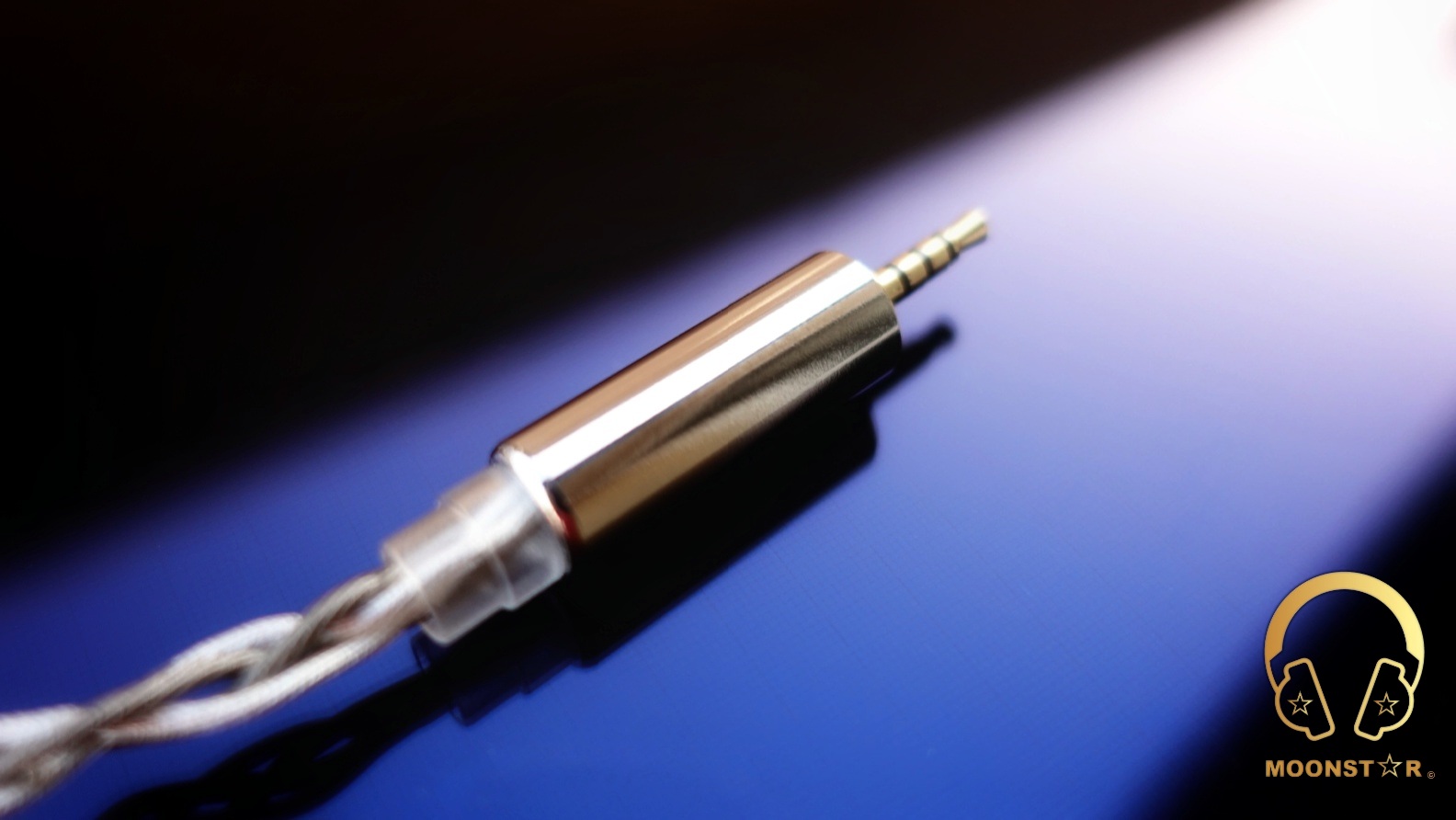 The BGVP NS9 is a quite efficient In-Ear Monitor thanks to a pretty low impedance of 20Ω and a sensitivity of 107dB, which makes it compatible with relative weak sources like Mobile Phones, Tablet’s or DAP’s with low power amplification. 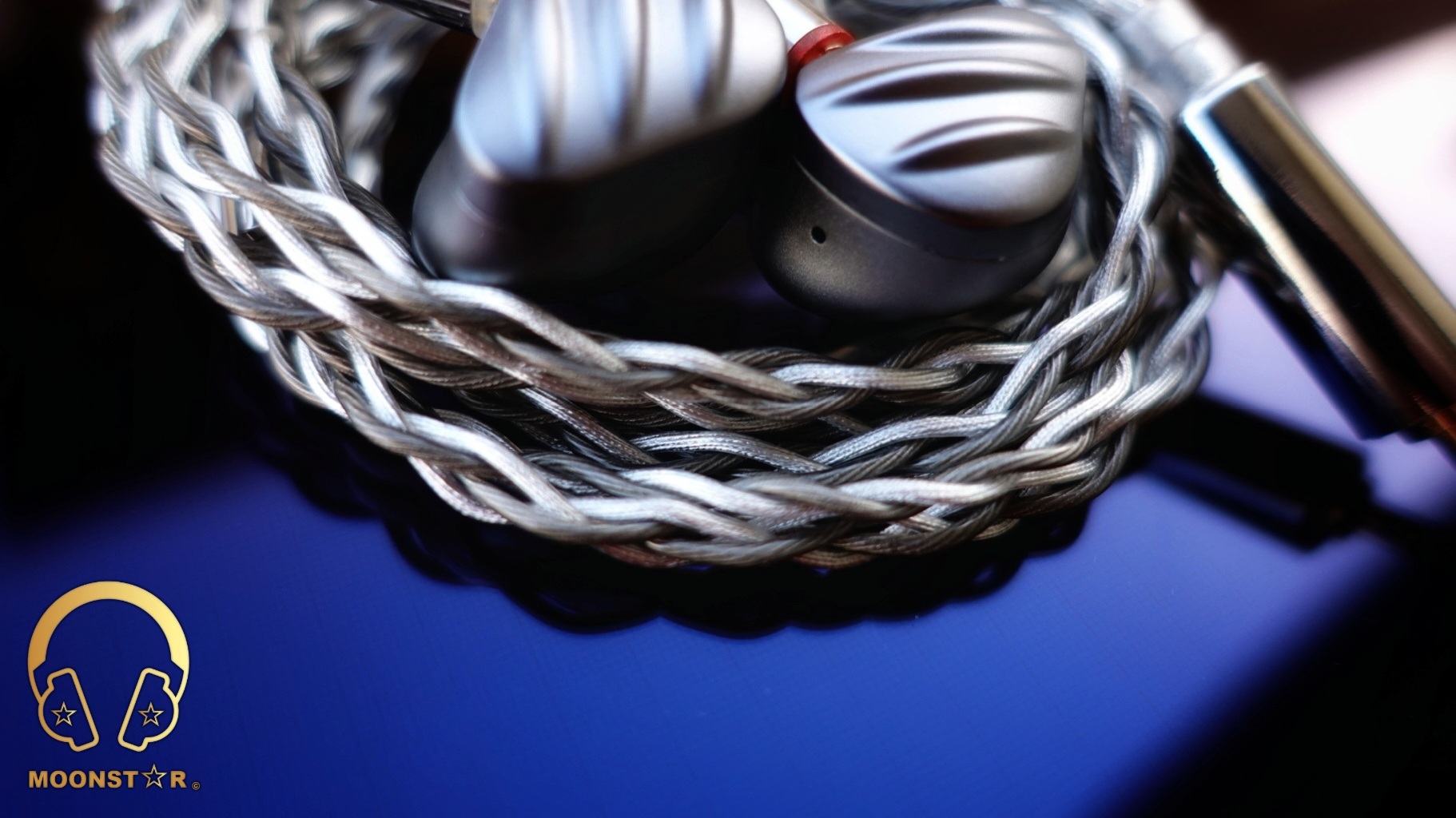 The noise isolation of the BGVP NS9 is on an average level, which is efficient enough for the use in fairly noise environments such as metro, bus or train, while it is not suitable for the use on the stage. 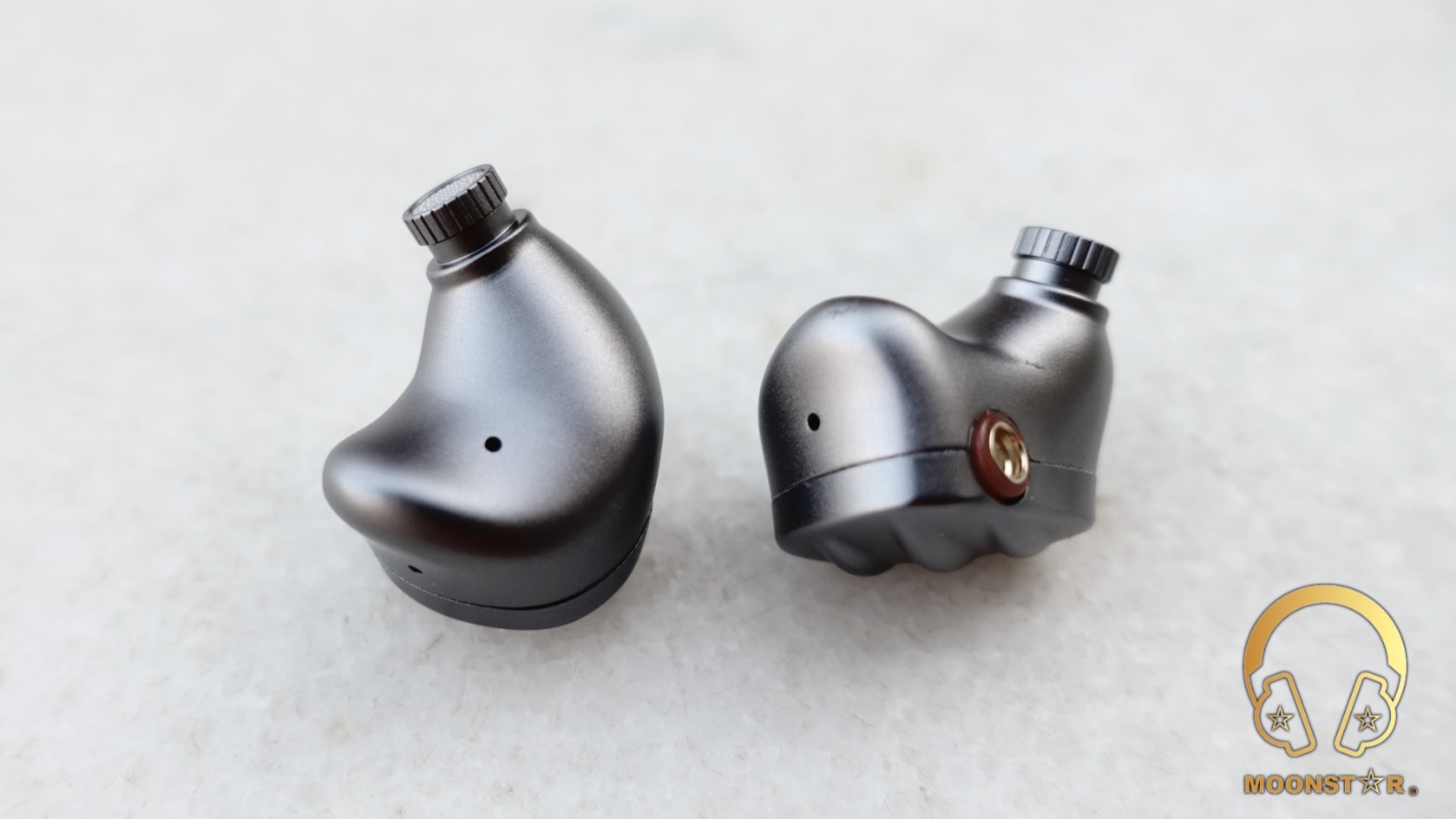 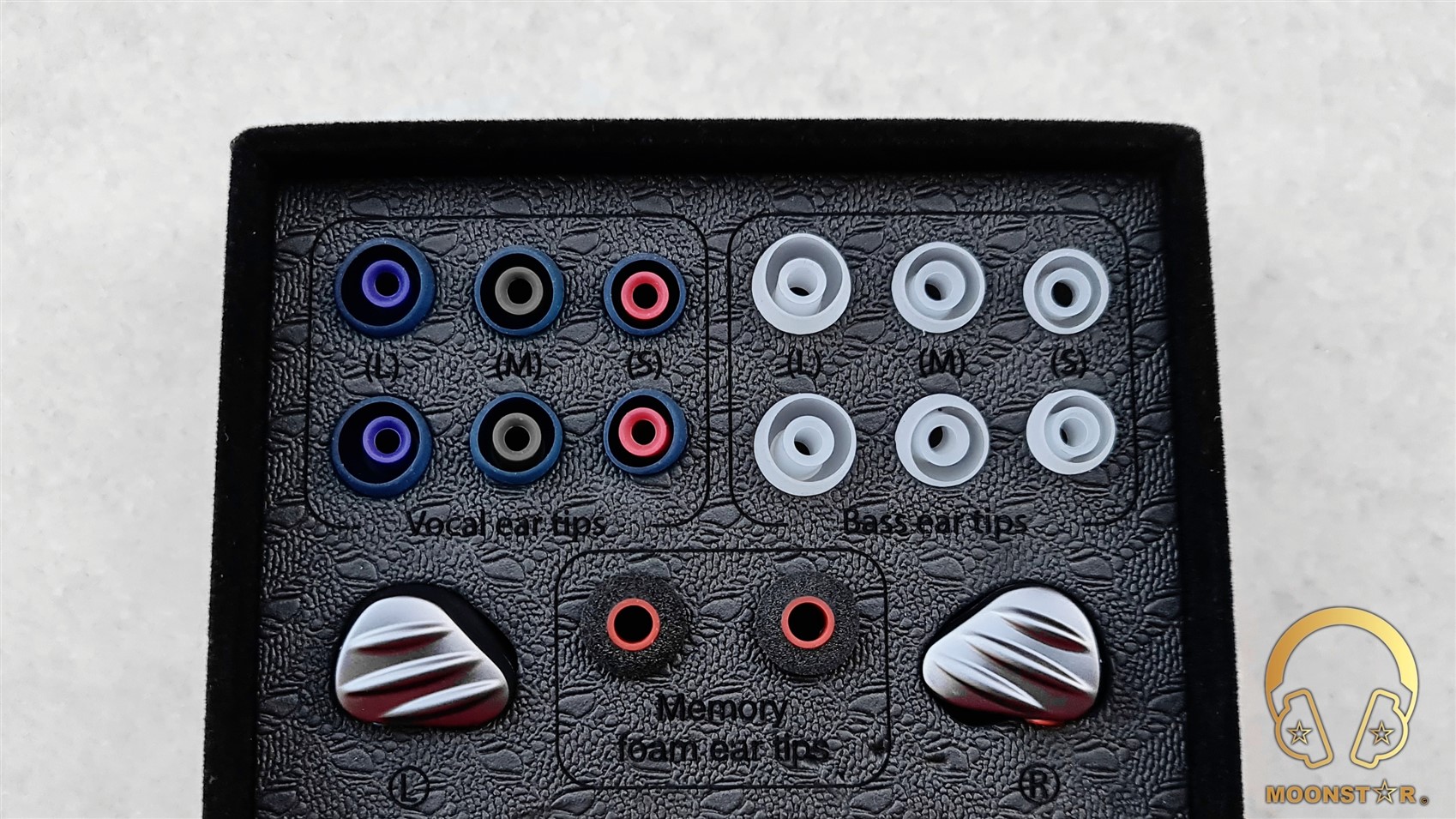 The BGVP NS9 is an IEM with a V shaped sound signature that has a pretty warm tonality. The bass is deep and strong; the midrange is slightly recessed and shows a moderate level of clarity, while the treble range is nicely soft and pretty detailed with a focal point in the upper treble region.

Please note that I have written my impressions after a burin-in period of 150 hours. The sound tuning filters of the NS9 doesn’t show any audible differences between each other. However I have used the balanced sound filter, the stock vocal ear tips and stock cable during this review. 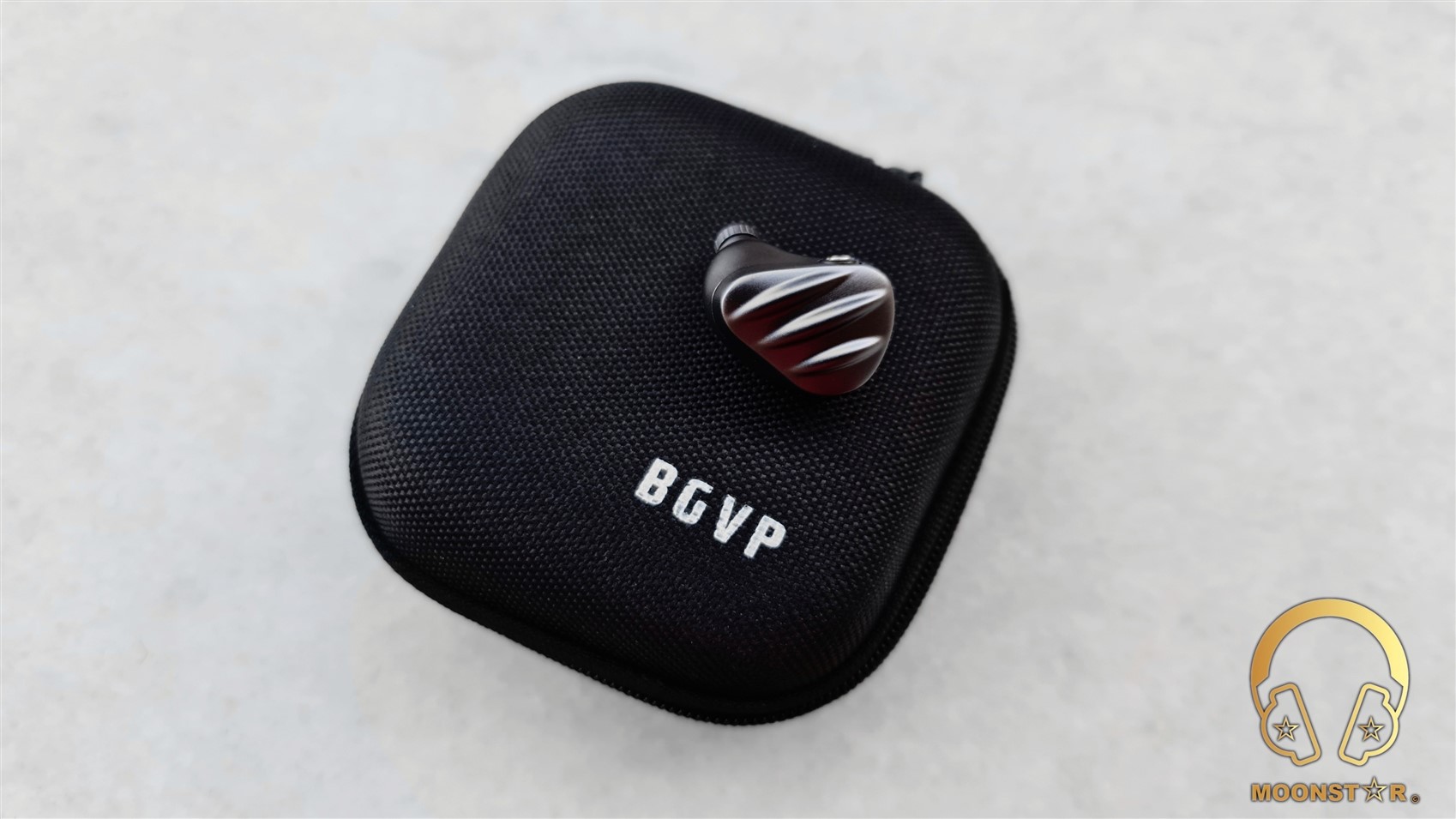 The lower frequency region of the BGVP NS9 is quite pronounced and impactful due to the V shaped sound signature. The subbass region offers a good sense of depth and rumble while the extension is on an average level. The subbass character makes the NS9 ideal for genres like pop or electronic music; however the speed of the subbass area is the weakness of the NS9.

The midbass tonality of the BGVP NS9 is pretty soft and musical, while the slam effect is quite impressive thanks to the extra emphasis that comes from the subbass region. The midbass are strong and impactful, while the decay is a bit slow. The general bass presentation of the BGVP NS9 shows an average level of speed and control, wile listen to songs like “Bro Safari, UFO! – Drama”, “Lorde – Royals” and “Really Slow Motion – Deadwood”. 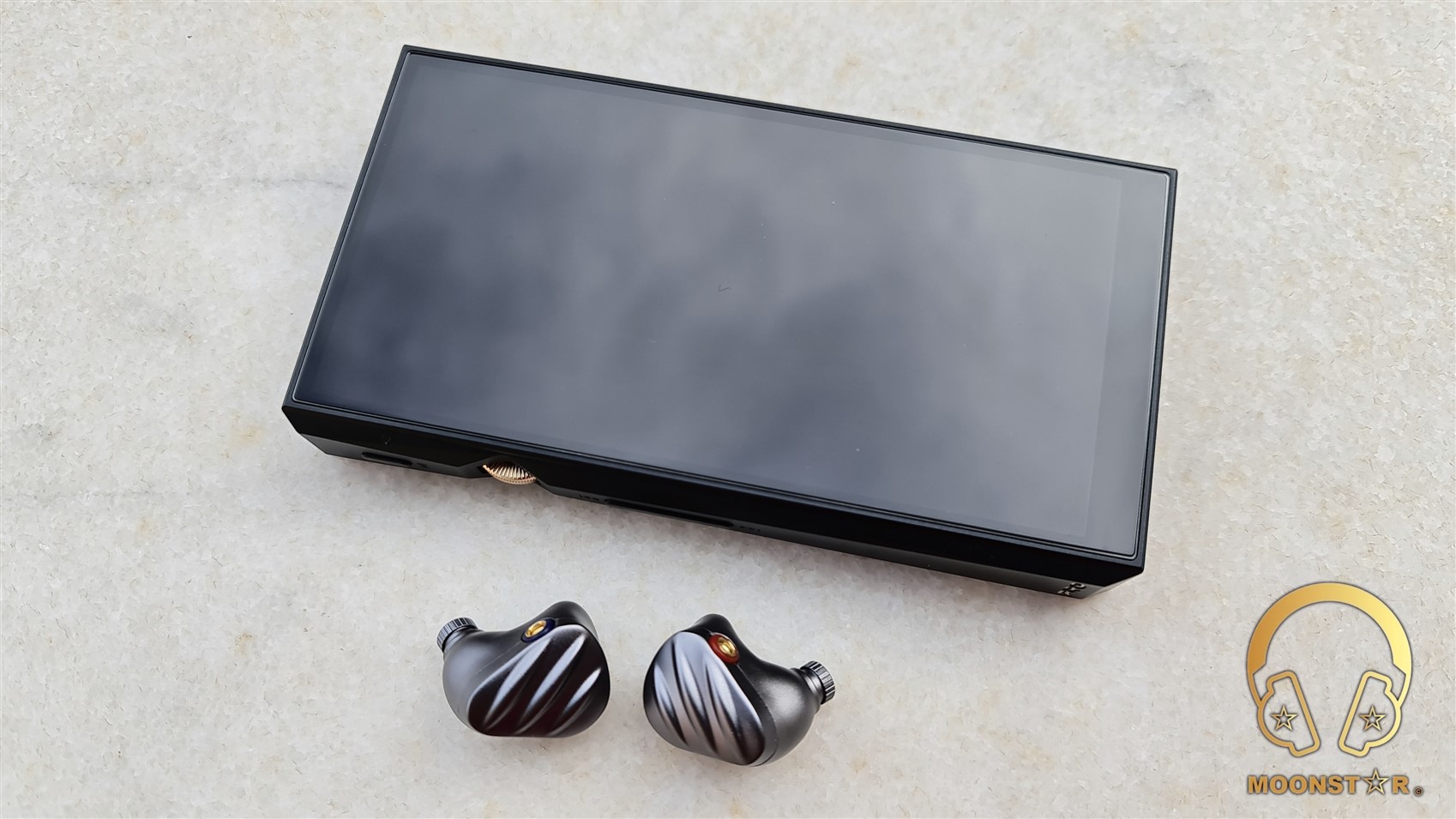 The midrange of the BGVP NS9 is slightly recessed due to the V shaped sound signature and is shows a fairly warmish tonality and musical presentation. The midrange has in general an average level of transparency and clearness.

The lower midrange of the NS9 has good depth, body and warmness and doesn’t sound thin or too dry. This makes it quite successful when I do listen to male vocals. Vocals like Barry White, Sting or Elton John are reproduced with a good sense of depth and fullness, while the clarity and transparency is on a moderate level.

The upper midrange of the BGVP NS9 is mildly pronounced with a slightly peak around the 2 kHz region that avoids a too muddies presentation in this area. The transparency and airiness and detail retrieval is on a sufficient level; however I would wish a tad more energy and dynamism in this area. The good part about the upper midrange tuning is that it is smooth and sibilant free when I do listen to both female vocals and instruments such like a violin or pianos. 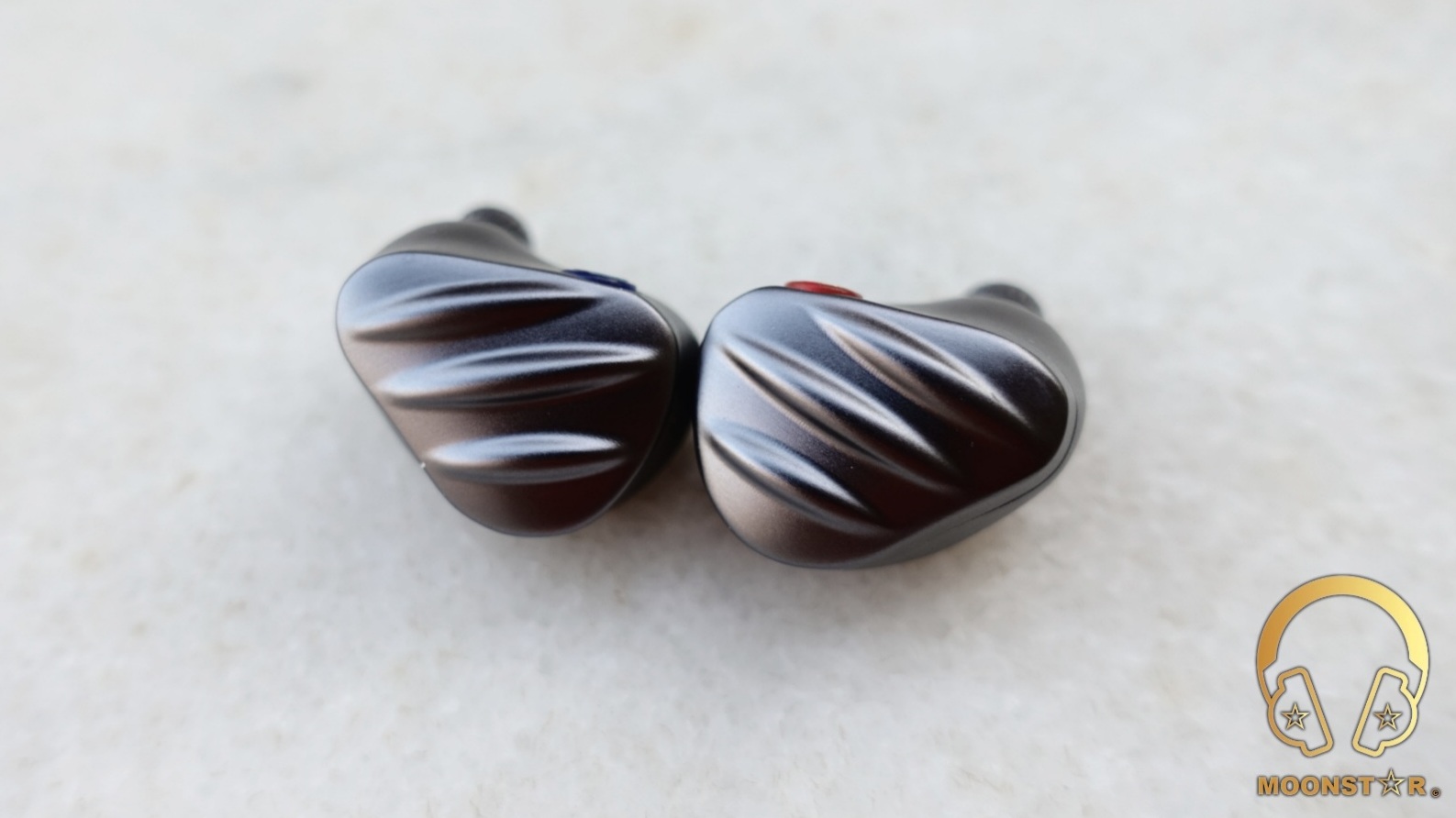 The treble range of the BGVP NS9 has a fairly warm and soft tonality with focal point in the upper treble region. The lower treble area of the NS9 is less pronounced and shows a slightly peak around the 6 kHz region that is able to produce a sufficient sense of clarity and definition.

The upper treble region is more highlighted, detailed and offers a better level of extension. The NS9 has an audible peak around the 7 – 8 kHz area that adds the overall presentation a good sense of airiness and sparkle. Instruments like cymbals are slightly bold/thick and do have warmish tonality, while hi-hats are lightly pronounced. Crash cymbals on the other hand are shown with average intensity sharpness, while the hits are in general fairly controlled.

The BGVP NS9 shows a sufficient soundstage performance with a fairly precise separation and placement of vocals and instruments. The stage of the NS9 has an average sense of depth and wideness, with sufficient space and airiness between instruments. 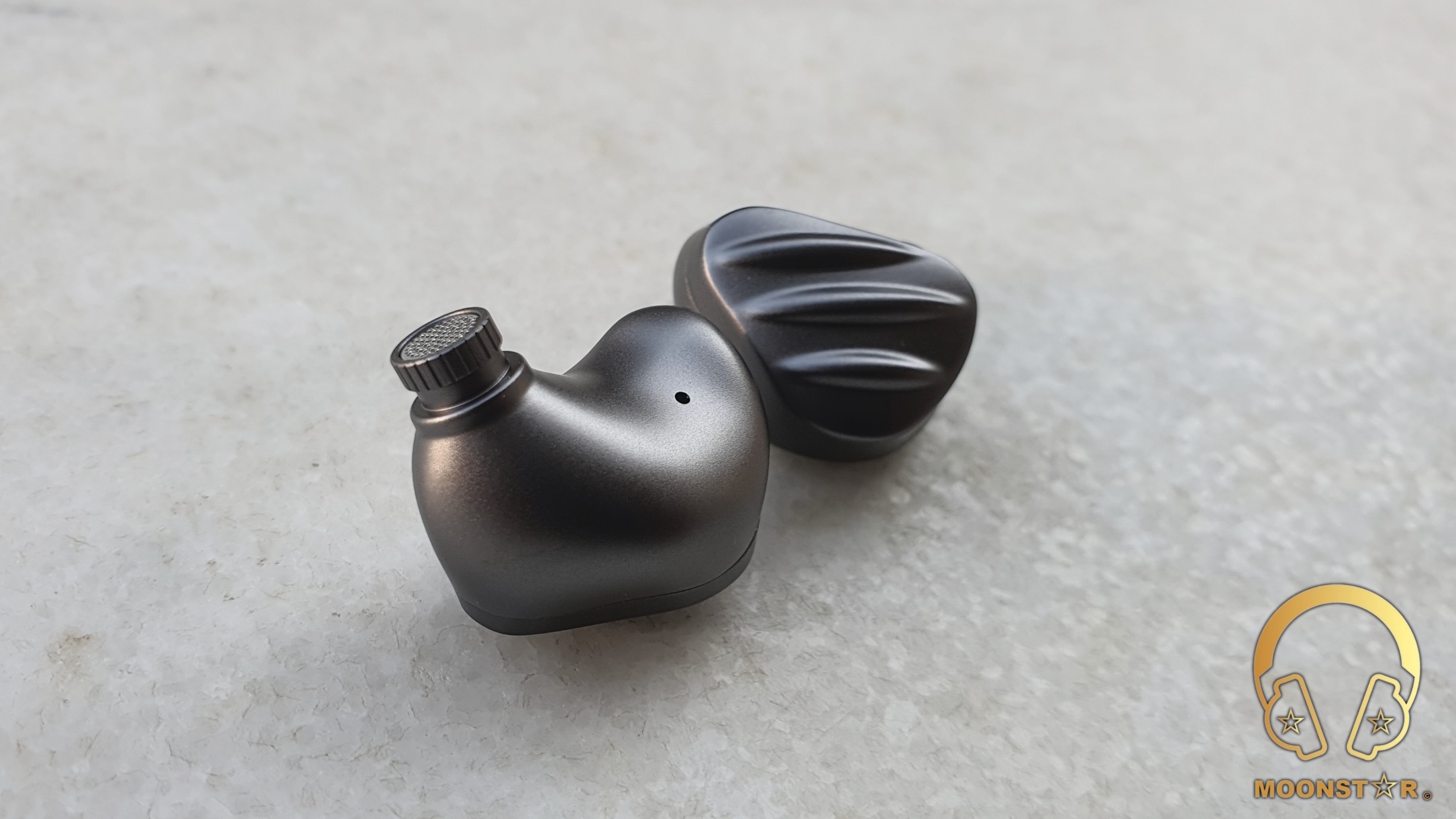 The BGVP NS9 has a slightly warmer tonality compared to the MEE Audio MX4 Pro, which sounds otherwise mildly warm and musical.

Both the subbass and midbass region of the NS9 are more pronounced and do show a better sense of depth, rumble and impact, while the MX4 Pro has the upper hand in terms of overall bass speed, decay and control.

The midrange of both IEM’s sounds a bit recessed and has a warm tonality with sufficient sense of clarity and airiness. The lower midrange of the BGVP NS9 offers more depth and body, which makes it more successful with male vocals or instruments like acoustic guitars or violas. When it comes to the upper midrange, I can say that the MEE Audio MX4 that it sounds slightly more highlighted and detailed compared to the NS9, which gives it an advantage while listen to female vocals or instruments like violins and pianos. 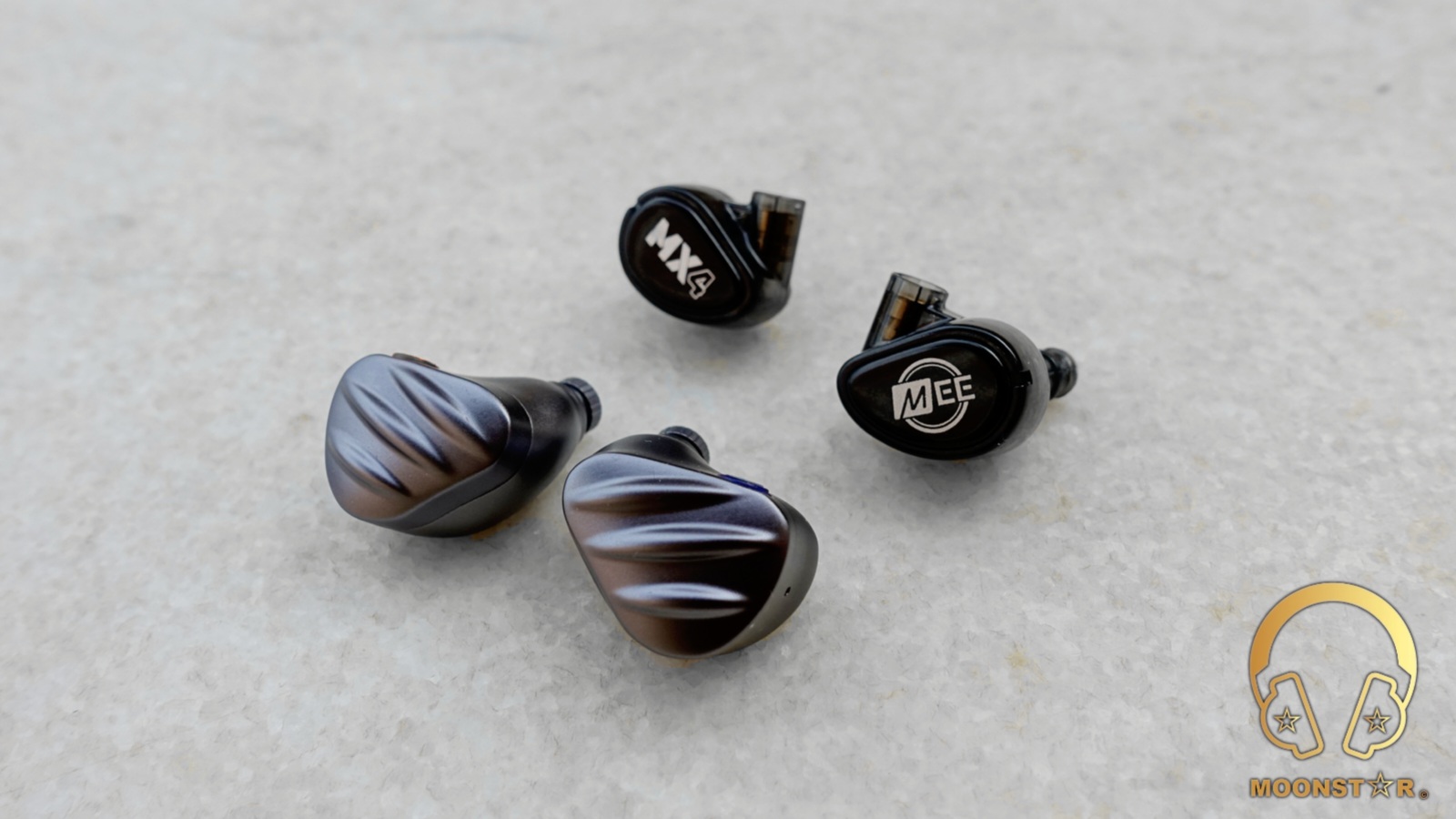 Both the BGVP NS9 and the MEE Audio MX4 Pro do have a have a pretty smooth and controlled treble response with moderate sense of brightness, extension and detail retrieval. The lower treble region of the MX4 Pro is slightly more pronounced and detailed compared to the NS9, which has the upper hand in the upper treble area, especially around the 7-8 kHz region.

The BGVP NS9 offers a slightly betters sense of soundstage wideness, while the MEE Audio MX4 Pro has an advantage when it comes to the depth of the stage.

The BGVP NS9 has a warmer and slightly more relaxed softer tonality, while both a IEM’s are in general successful when it comes to the overall musicality. Both the subbass and midbass regions of the Comet do have slightly more depth and intensity, while the Spring 2 has an advantage in terms of overall speed and control.

The midrange of the BGVP NS9 has a slightly warmer tonality compared to the BQEYZ Spring 2, which offers a slightly better sense of transparency and micro detail retrieval. The NS9 sounds more successful when I do listen to male vocals, due to its lower midrange tuning that shows slightly more depth and body. The BQEYZ Spring 2 on the other hand has the slightly edge when it comes to he female vocal presentation due to its more pronounced upper midrange character. 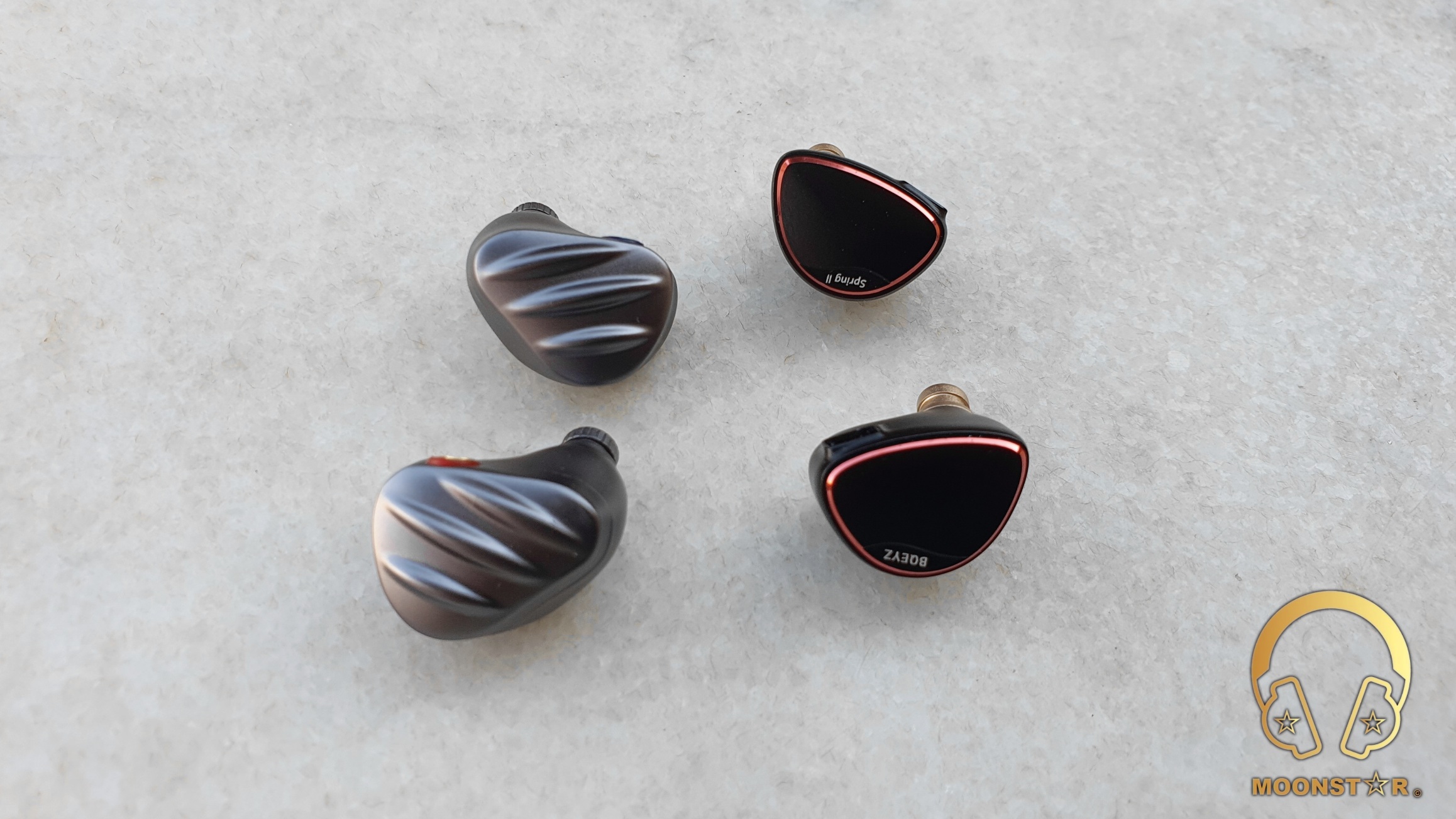 The treble region of the BQEYZ Spring 2 is a bit more highlighted especially in the lower treble area, however both IEM’s do sound otherwise pretty smooth and relaxed. The upper treble region of both the NS9 and the Spring 2 is more accented and shows a peak around the 7 – 8 kHz region that adds the overall presentation airiness and sparkle.

The soundstage of the BQEYZ Spring 2 sounds more expansive and airy compared to the BGVP NS9. The Spring 2 hast the upper hand in terms of soundstage wideness, while NS9 has an slightly advantage when it comes to the depth of the stage.

The BGVP NS9 is an In-Ear Monitor with a nice looking CNC machined aluminum shell that has inside of it an impressive hybrid driver configuration with 7 BA +2 Dynamic Drivers, which could may have had better implemented. However, If you like a deep and punchy bass response, smooth and relaxed midrange & treble character, along with a mildly warm tonality, the NS9 could be a pretty good choice for you.