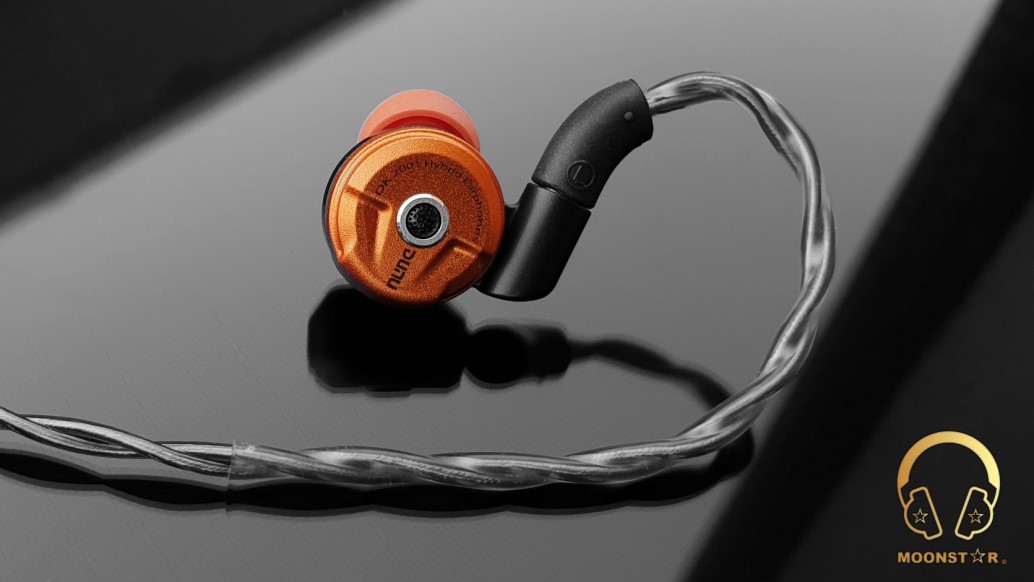 DUNU was originally an OEM/ODM manufacturer established in 1994 and focuses on development, manufacture and marketing of professional earphone and ear bud products. DUNU’s manufacturing plant is located in Dong Guan City, Guangdong, China.

I would like to thank DUNU for providing me the DK-2001 sample for review purposes. I am not affiliated with DUNU beyond this review and these words reflect my true and unaltered opinions about the product.

The DUNU DK-2001 came in a rectangular box with a solid appearance which is wrapped with a white cardboard that features the visuals of the DK-2001 and has also some advertisements (Hi-Res, Knowles, Comply, SpinFit, etc.) on the top and some specifications at the backside. 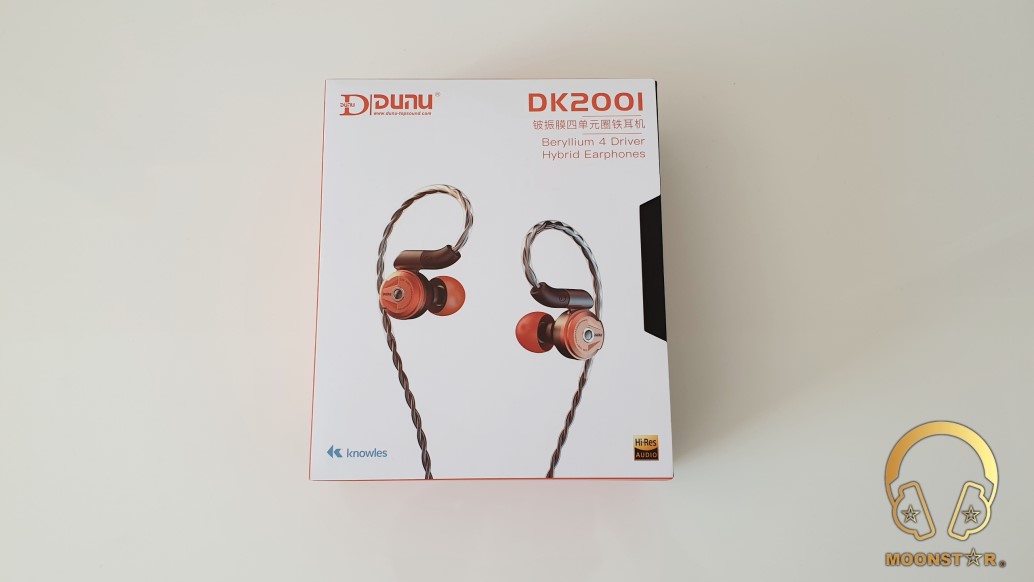 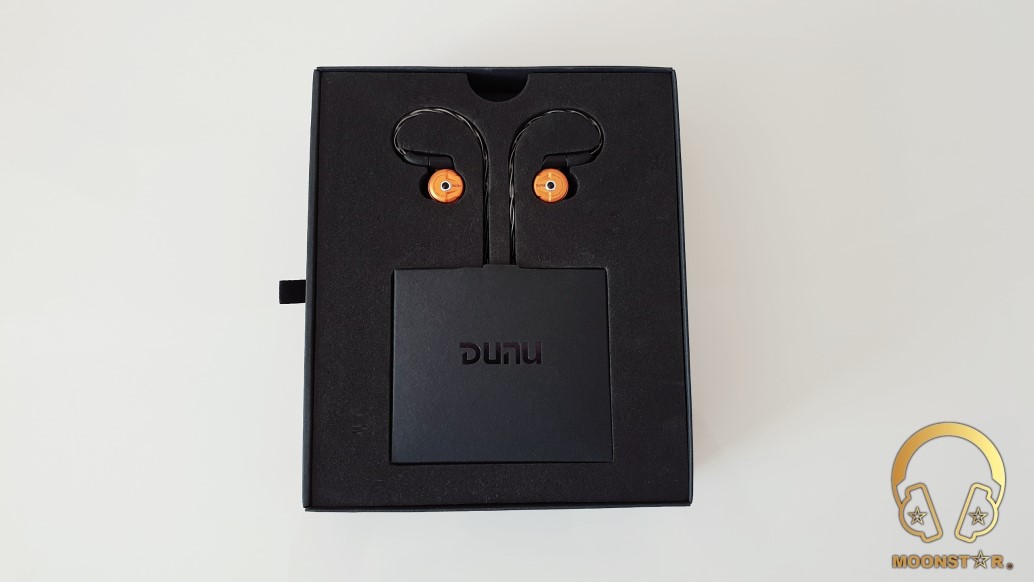 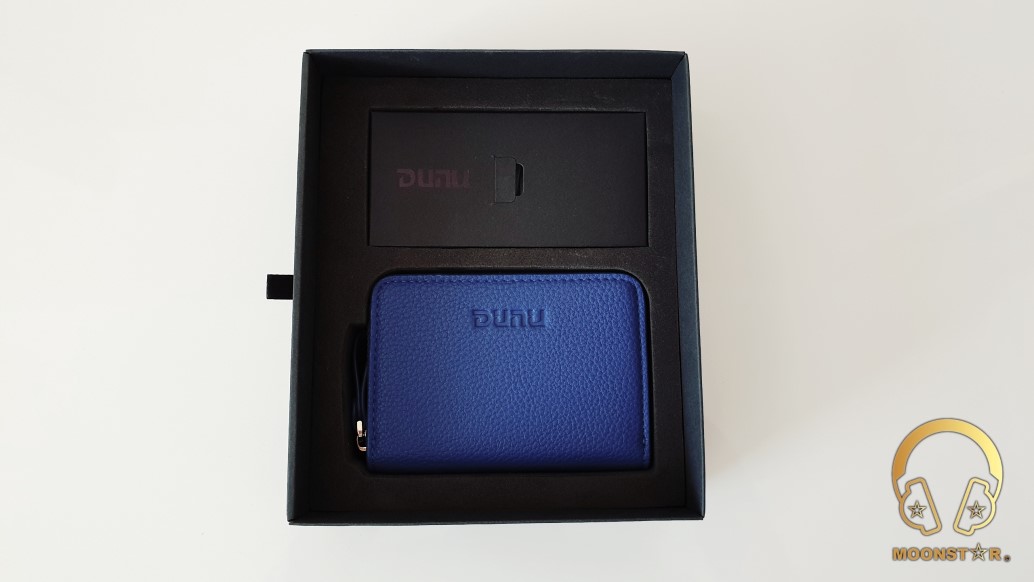 The DK-2001 comes with lots of silicone ear tips (10 pairs of silicone & 1 pair of foam tips) and a leather case with zipper which is in blue color. 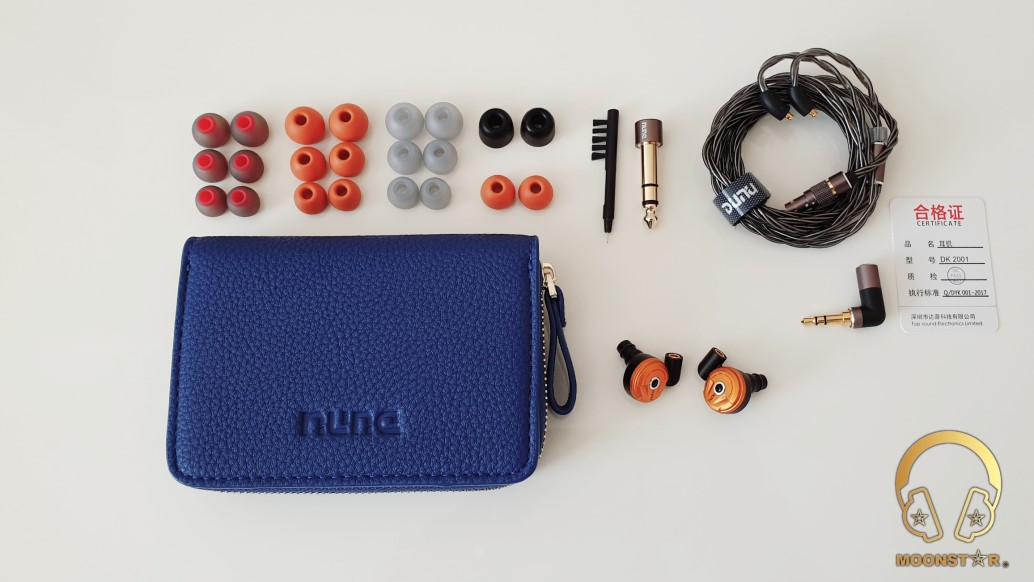 The case looks beautiful, same as the one which where included to the packaging of the DK-3001 Pro, DK-4001 and Titan 6. 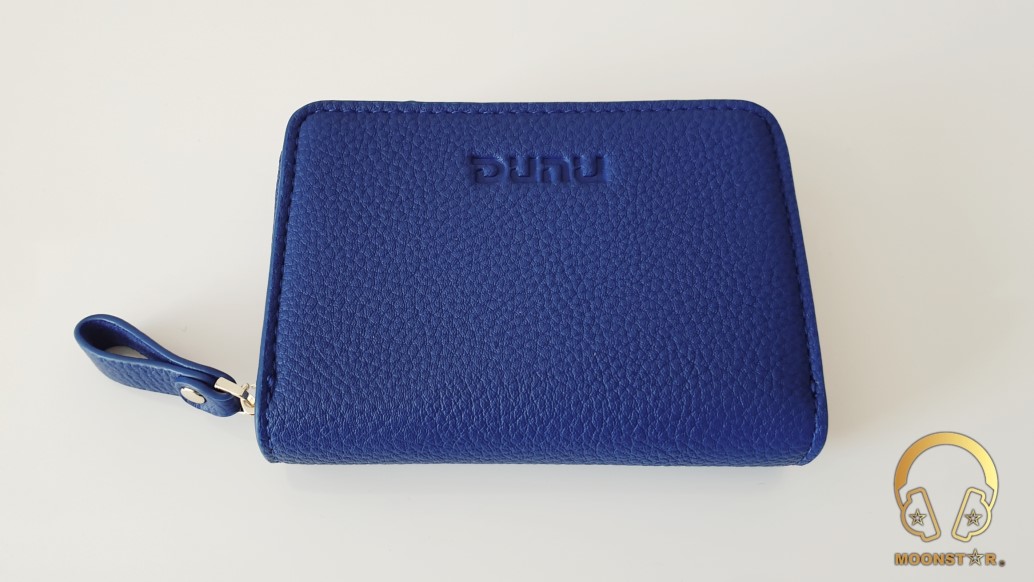 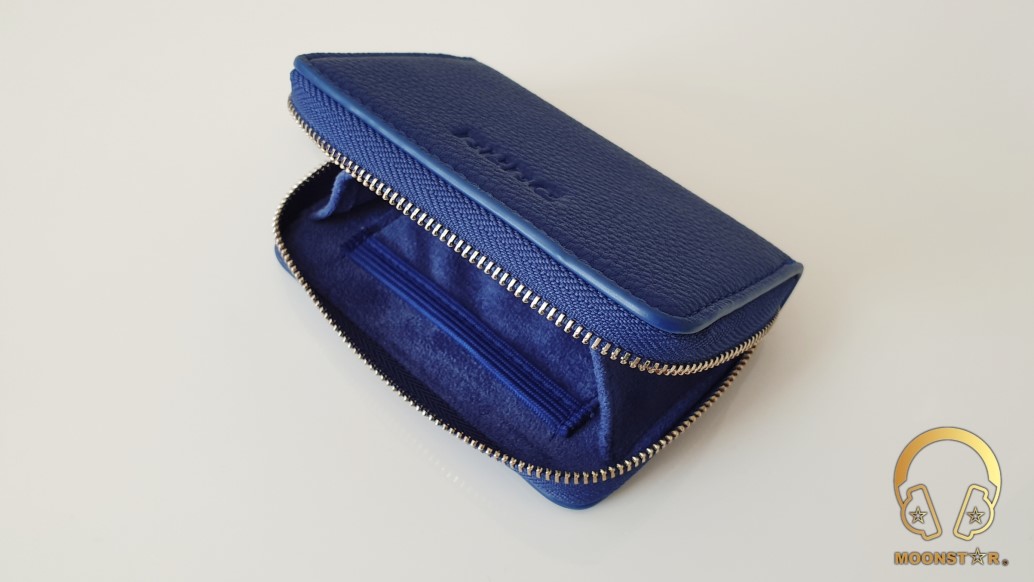 The 6.3mm headphone adaptor and the cleaning tool are also some nice additions. 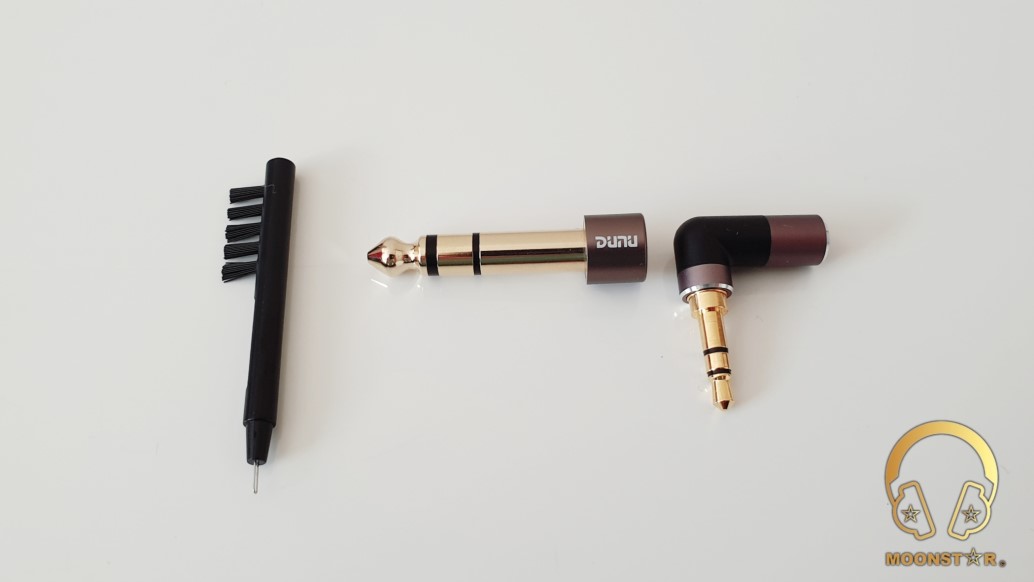 The DUNU DK-2001 has a relative small monitor shell that has a look and feel of high quality with its main body which is made of S316 grade stainless and a front part (faceplate) that is made of a so called high-strength aluminum-magnesium alloy. 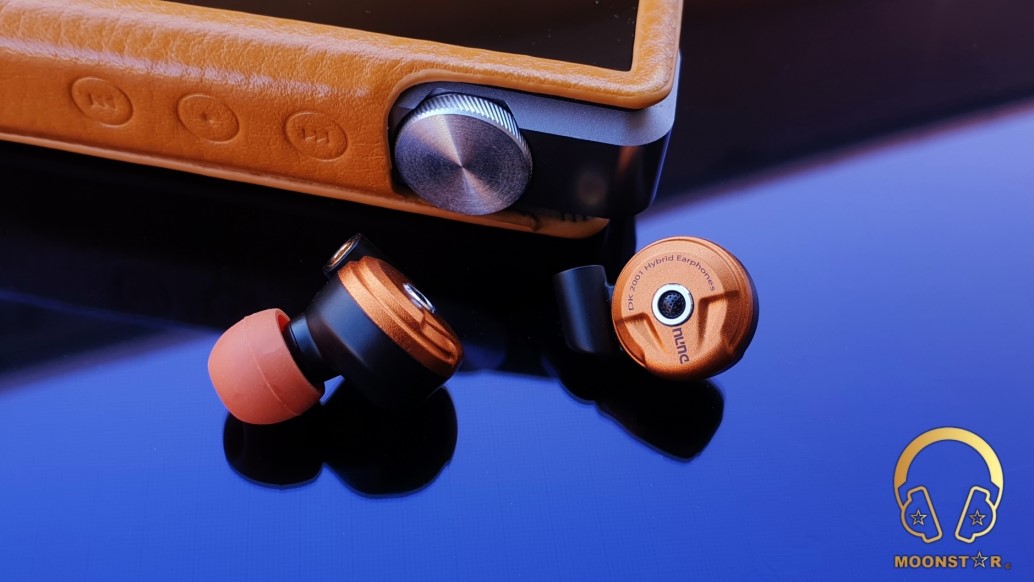 The main body is in black color while the front part is available in 3 (three) different colors which are the Obsidian (black), Turquoise and Topaz (orange) color options. 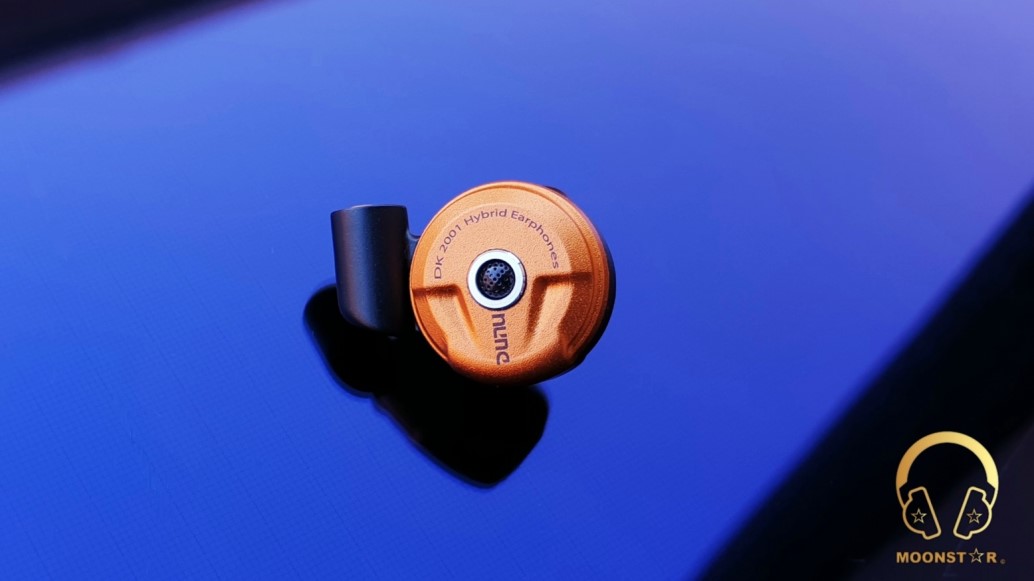 The faceplate sports a rounded black metal mesh with an outer metal ring in silver color. Here is also the DUNU brand logo which is printed in black color. 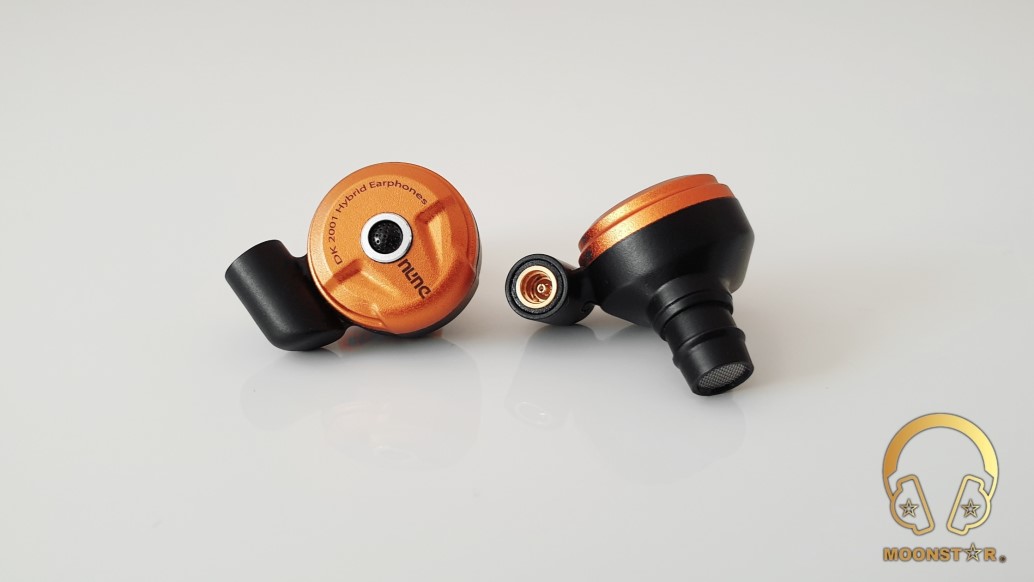 At the backside of the monitor shell is the sound nozzle, a small vent and the Left / Right markings. 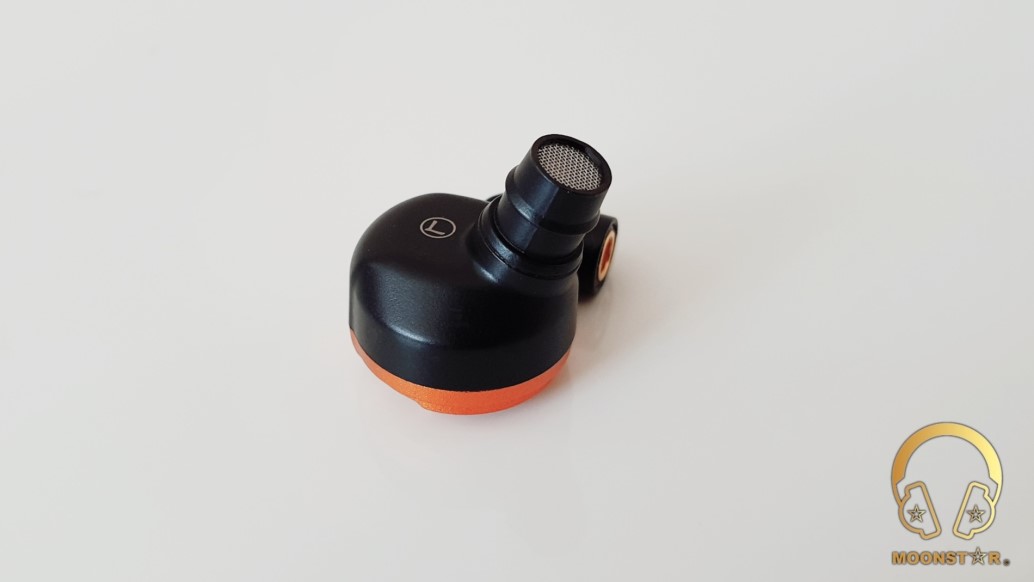 The sound nozzle is slightly angled and has a pretty long profile same as the DK-3001 Pro and DK-4001. On the top of sound nozzle is a metal mesh that should prevent the insertion of small particles like dust or earwax. You can clean this mesh with the cleaning brush that is included to the package of the DK-2001. 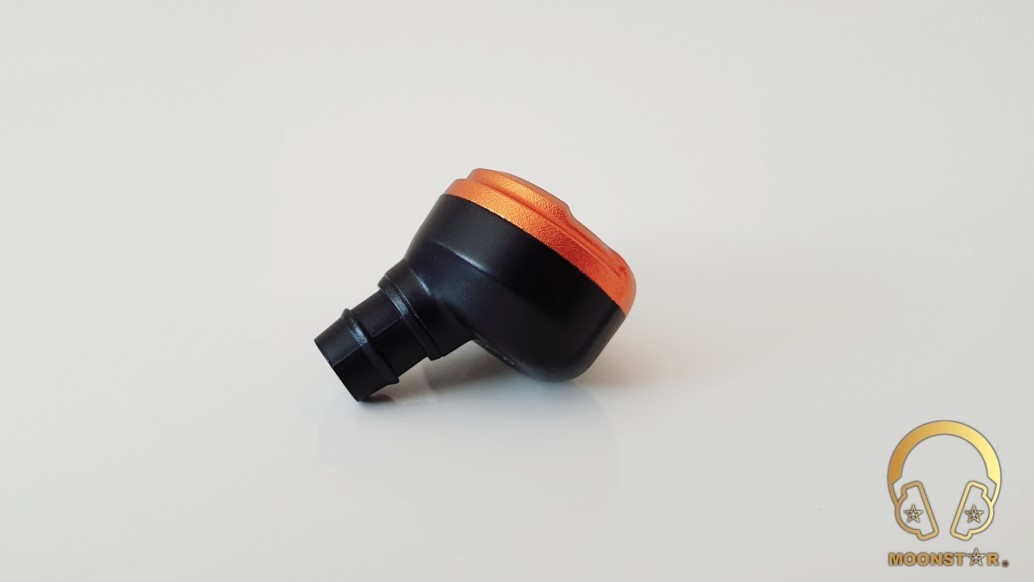 On the top of the monitor housing is the ledge part that features the DUNU patented Catch-Hold MMCX Connector. 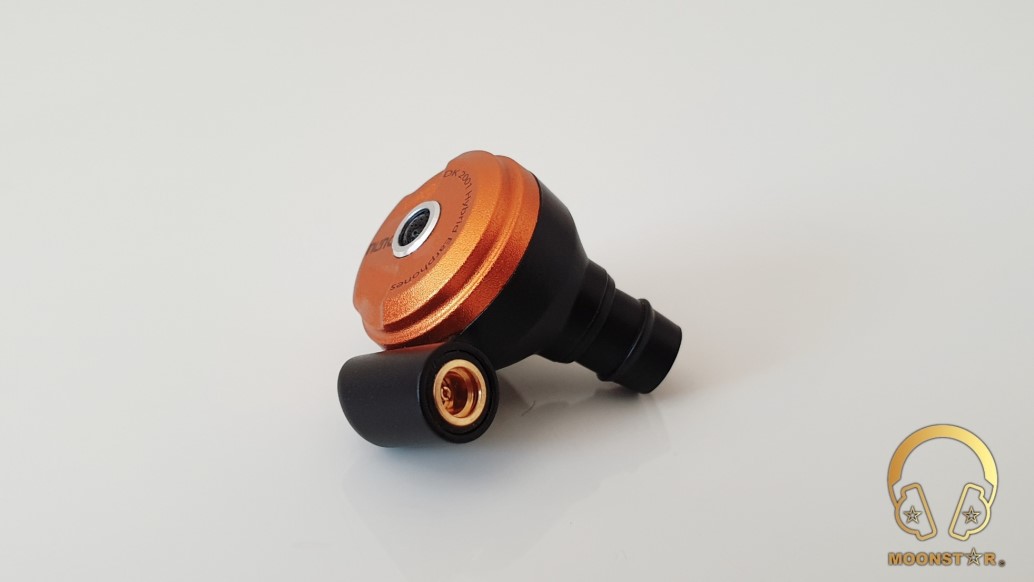 This MMCX connector utilizes the hollow cylinder design to lock the earphones and effectively improve the connectivity. This should increase according to DUNU the service life of the MMCX connector.

DUNU ships the DK-2001 with a detachable cable which is made of High-Purity Silver Plated OCC (Ohno Continuous Cast) Copper Litz Type1 wire. 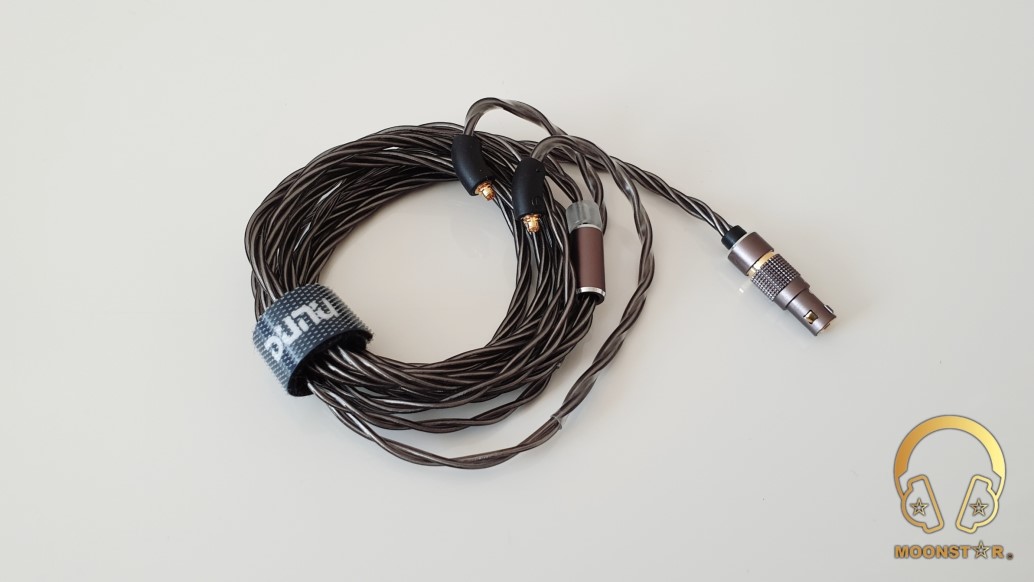 The cable has a twisted profile and features TPU insulation in grey color. 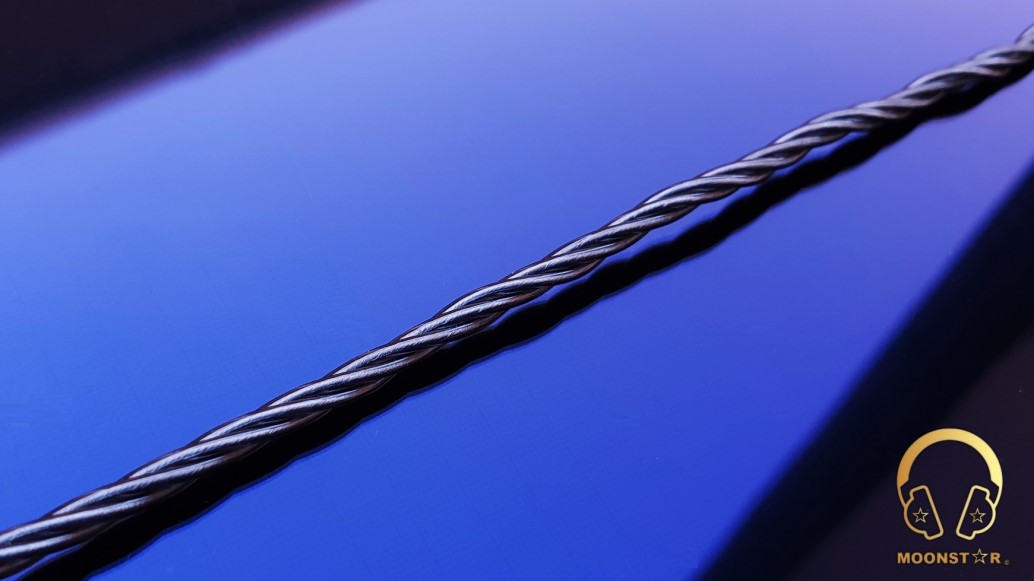 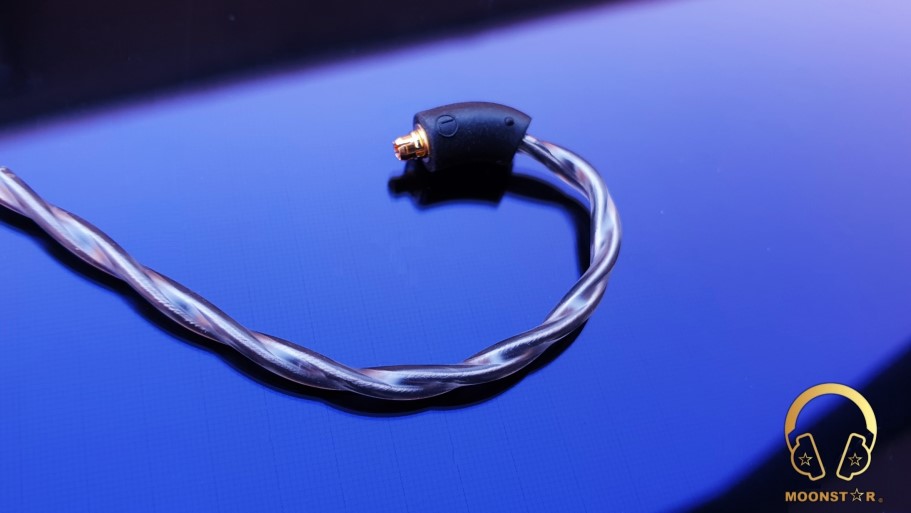 The MMCX connectors of the cable have a black plastic housing with Left & Right markings. The patented Catch-Hold® MMCX connectors utilize the hollow cylinder design to lock the earphones and effectively improve the connectivity. 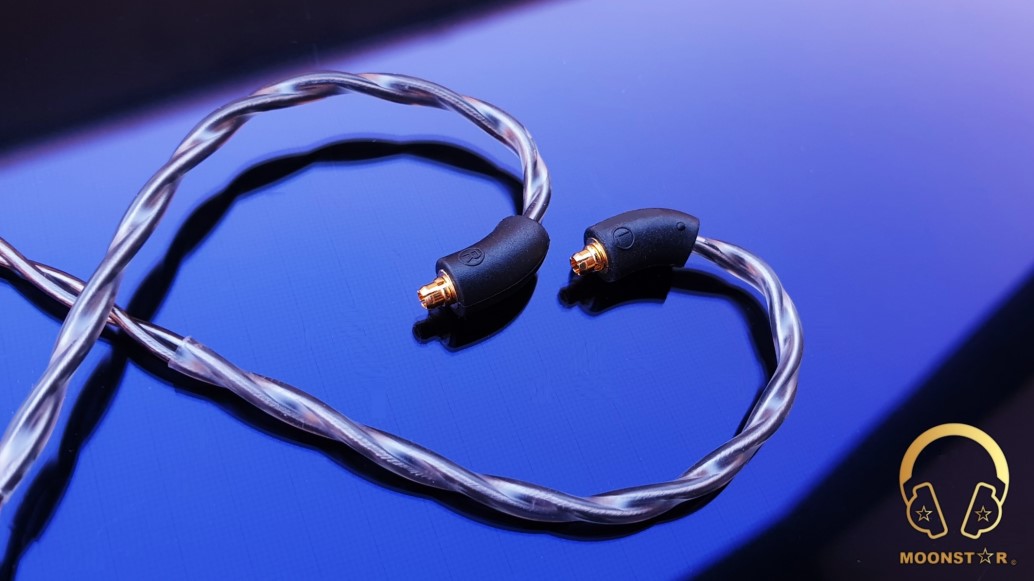 This cable features also a stylish metal y-splitter in brown color with DUNU product branding and has also a transparent plastic chin slider. 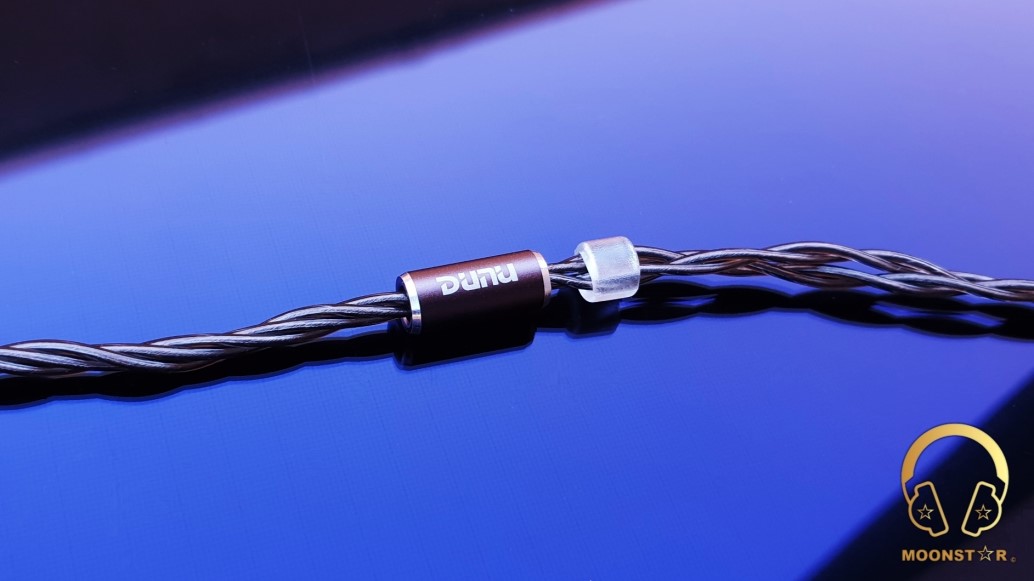 The DK-2001 cable is coming with the DUNU patented Quick Switching Connector that we have seen on other DUNU products like the DK-4001, DK-3001 Pro IEM’s and the HULK upgrade cable. 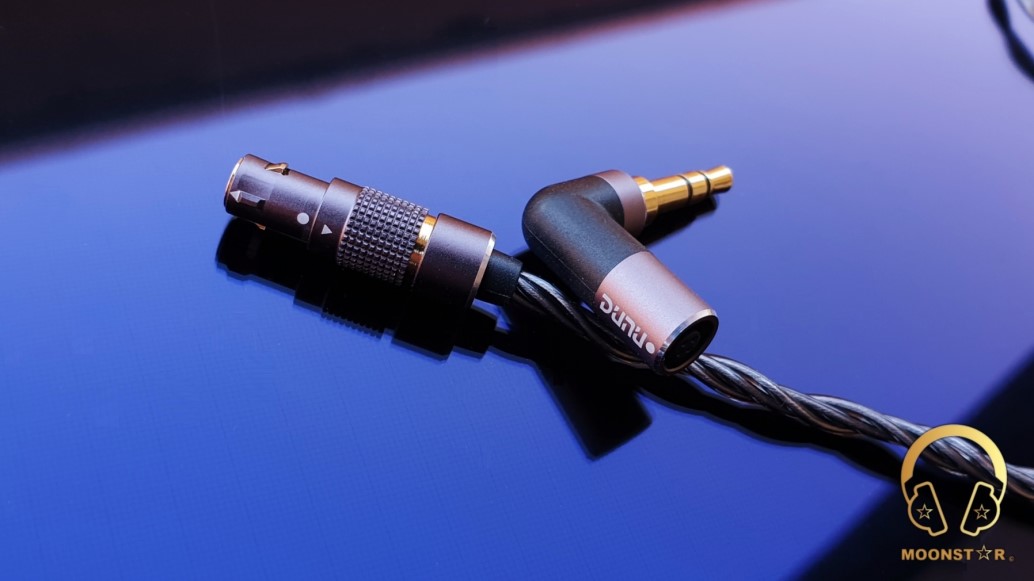 DUNU ships the DK-2001 with only one connector which is the one with the standard 3.5mm TRS headphone jack, but is compatible with all other Quick Switching Connector of the company.

The DUNU DK-2001 offers an ergonomic monitor shape with a relative small size for an IEM with a 3+1 hybrid driver configuration. The performance of the DK-2001 in terms of isolation is on an average level.

The DUNU DK-2001 has an impedance of 13Ω and sensitivity of 109dB, which makes it to a easy to drive In-Ear Monitor for relative weak sources like Smartphone’s, Tablets and smaller sized DAP’s. 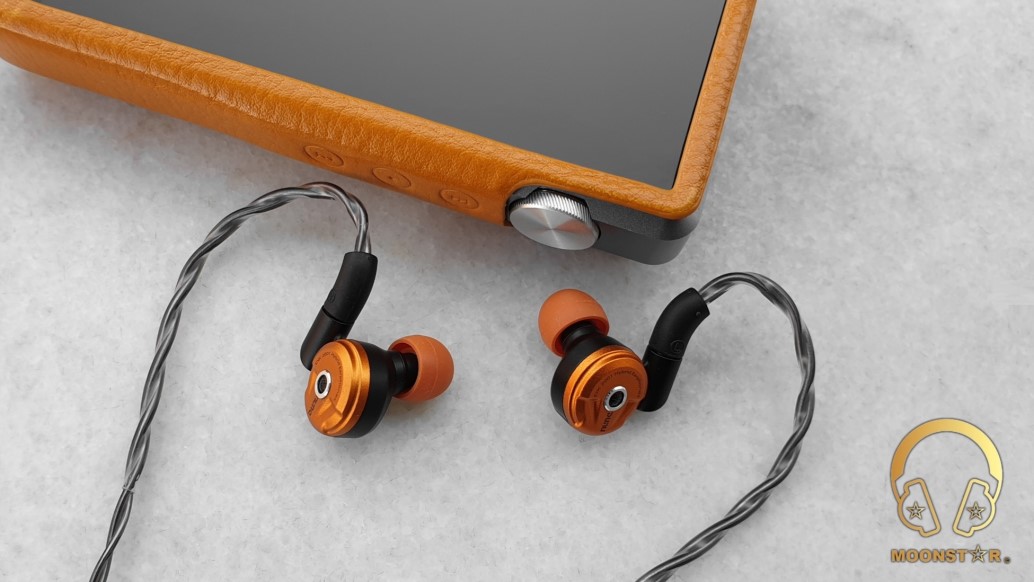 The DUNU DK-2001 offers a musical presentation with a slightly warmer than neutral tonality that shows a tad of coloration. The bass is pretty deep and fast, the midrange is slightly warm, while the upper midrange/treble has a soft & smooth tonality.

This review is written after a burn-in period of 120 Hours. I have used the grey silicone ear tips which are included to the package. 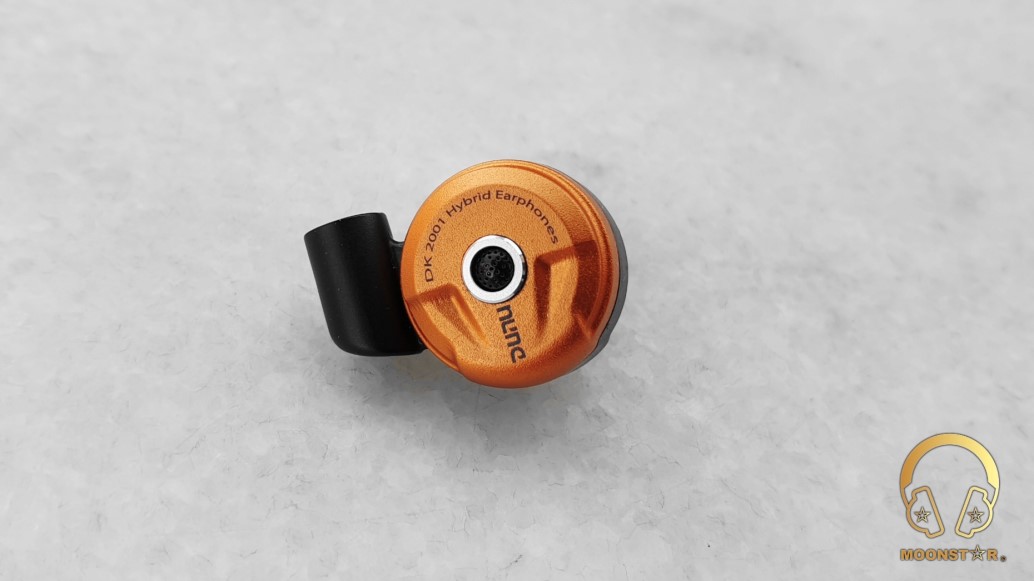 The lower frequency region is one of the highlights of the DUNU DK-2001 that offers a entertaining and exhilarating performance with genres like Pop, Hip-Hop, Edm or Trance music. The subbass region has a warm tonality and shows a good level of depth, intensity and rumble that I quite enjoyed in songs like Lorde’s “Royals”, Gogo Penguin “Raven” and Photek’s “The Hidden Camera”.

The midbass region of the DK-2001 has a controlled, slightly warm, non-loose, tight and fast structure. The overall tonality is slightly warmer than those of the subbass region. The DK-2001 is an In-Ear Monitor with a full bodied, highlighted midbass that offers also a good level of separation. While I did listen to the DK-2001, I did not come across negative situations of the midbass region such like compressing the stage and getting ahead of instruments.

The midbass quantity and intensity of the DK-2001 is on a sufficient level that is in general neither too much nor too low.

The DUNU DK-2001 has in general a good amount of bass intensity, speed and emphasis. Bass speed can reach the music even in the fastest tracks. The fact that the bass is highlighted, but clean and fast at the same time is a great ability, especially for a product at this price range.

DUNU DK-2001 offers a close to neutral and slightly warm tonality with a musical and smooth midrange presentation. The midrange of the DK-2001 is slightly highlighted, which can make it to a good choice for those who like a slightly mid-forward presentation. 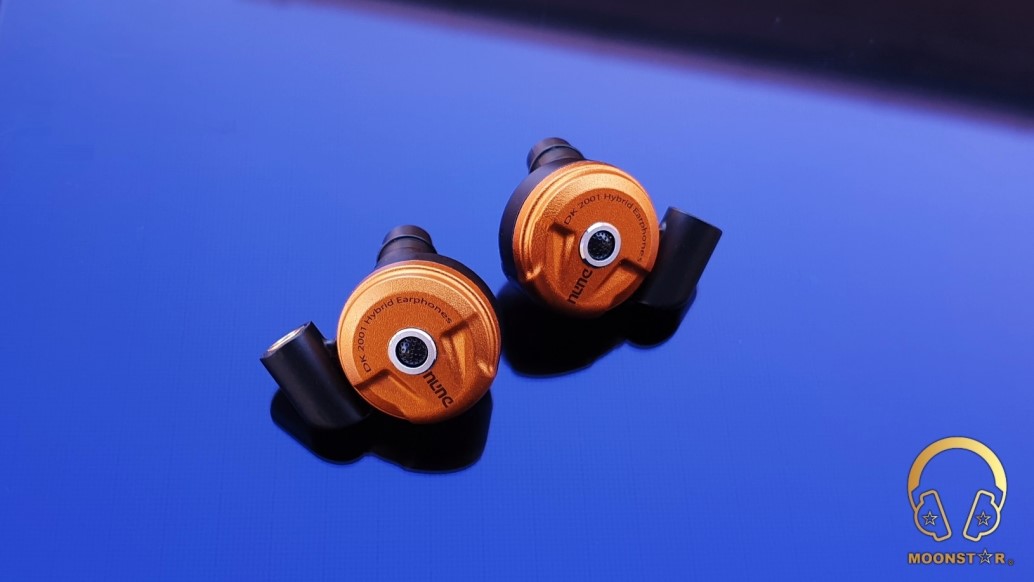 The DK-2001 shows a good lower midrange depth and body, with a moderate type of fullness and smoothness. This tuning is an advantage for male vocals that do sound pretty detailed and clear, without to hear any negative conditions like muddiness and mixings.

Female vocals on the other hand have a fresh, slightly warm and musical tonality, because of the moderately pronounced and soft tuning of the upper midrange. Female vocals of the DK-2001 are also not affected by negative situations like sibilance or harshness. The values of transparency airiness are also on a pretty good level.

I found the DK-2001 quite detail and successful in terms of instrument clarity and distinction. It is also successful in terms of instrument and vocal separation. Instruments like guitars are lightly warm, a bit bassy and bright towards the top. The DK-2001 offers in general a very musical, soft and engaging guitar presentation. Other instruments like pianos are pretty soft, and fairly bright in tonality, without to show any negative situations like over-brightness or sharpness. 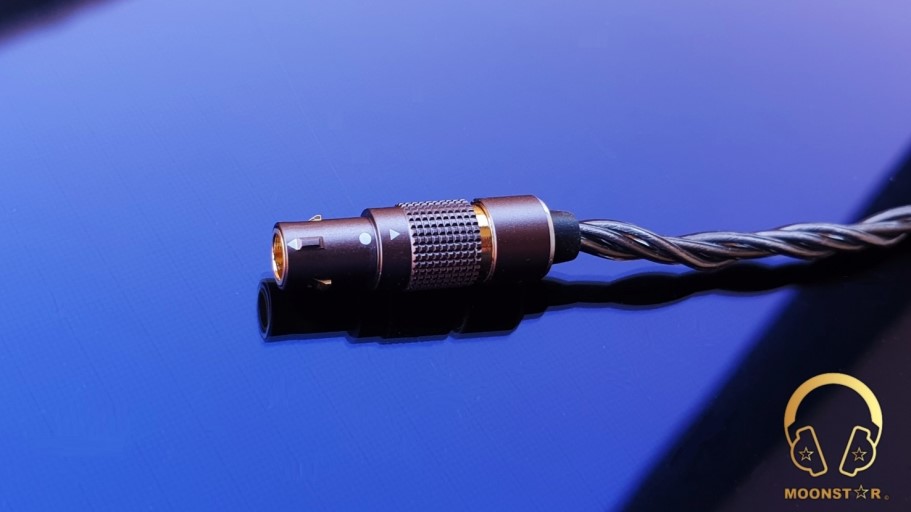 The DUNU DK-2001 Dk2001 has in general a close to neutral, moderately pronounced, smooth upper midrange tuning. The upper midrange transitions are pretty controlled and soft.

The upper midrange sounds lively, soft and balanced with everything from female vocals to violins and woodwind instruments.

For example, instruments like hi-hats in metal music are slightly recessed, while the hits are countable and the extension is on a sufficient level. Crash cymbals on the other hand have a pretty controlled extension, while it does sound a bit short.

The general treble intensity and quantity is not too much or to low and will satisfy most of the people who will listen to it. I do really like the balanced and controlled treble tuning of the DUNU DK-2001. 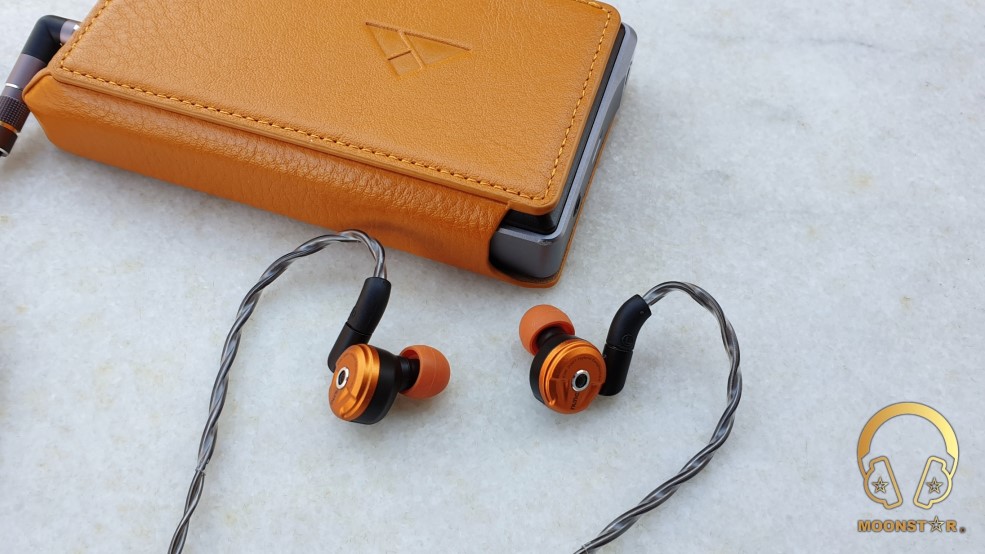 The DUNU DK-2001 has a soundstage that offers enough space for a fairly precise placement of instruments and vocals. The soundstage has a good level of depth, while the wideness is on a moderate level.

The DUNU DK-2001 is an In-Ear Monitor that shows a warmer tonality, fuller and more musical tonality tahn those of the Oriveti OH300. The OH300 on the other hand has a more neutral, balanced and slightly brighter tonality.

The subbass region of both IEM’s is pretty close in terms of depth, while the DK-2001 shows more subbass intensity and slightly better extension. The midbass character of the Oriveti OH300 is more linear compared to the DUNU DK-2001 that shows more intensity and quantity in this frequency region. 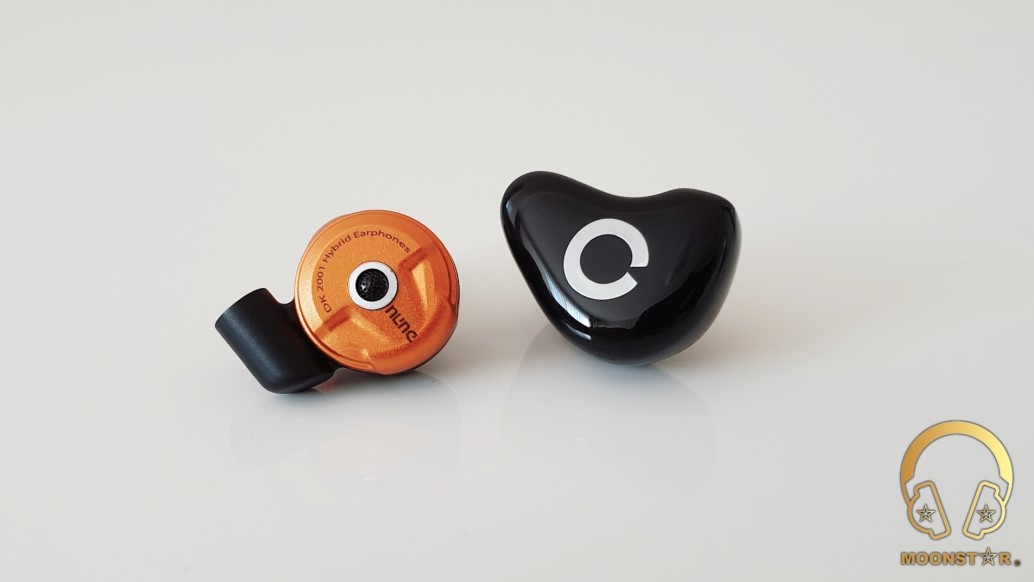 The Oriveti OH300 has a slightly advantage in terms of bass speed and tightness, while the level of detail retrieval is pretty equal.

The midrange of the DK-2001 has a warmer tonality and a softer, more musical presentation, compared to the OH300, which offers a more neutral, slightly brighter and balanced midrange character. Oriveti OH300 has the upper hand in terms of female vocals due to its more pronounced and detailed upper midrange, while the DUNU DK-2001 is superior in terms of male vocals thanks to its lower midrange tuning.

The treble range of the OH300 shows slightly more neutral tonality and is also more highlighted compared to those of the DK-2001. The DK-2001 on the other hand shows a slightly better performance in terms of treble control.

When it comes to the soundstage, I can say that the DK-2001 is superior in terms of soundstage depth, while the Oriveti OH300 has the upper hand for wideness.

The FiiO FH5 is an In-Ear Monitor with a W shaped sound signature with a subbass and upper midrange that is more highlighted then the other frequency regions.

The subbass area of both IEM’s is successful in terms of depth and quantity and do show a warm tonality. The midbass region of the FiiO FH5 is not as pronounced like its subbass area, while the DUNU DK-2001 offers a more pronounced midbass presentation compared to the OH300. 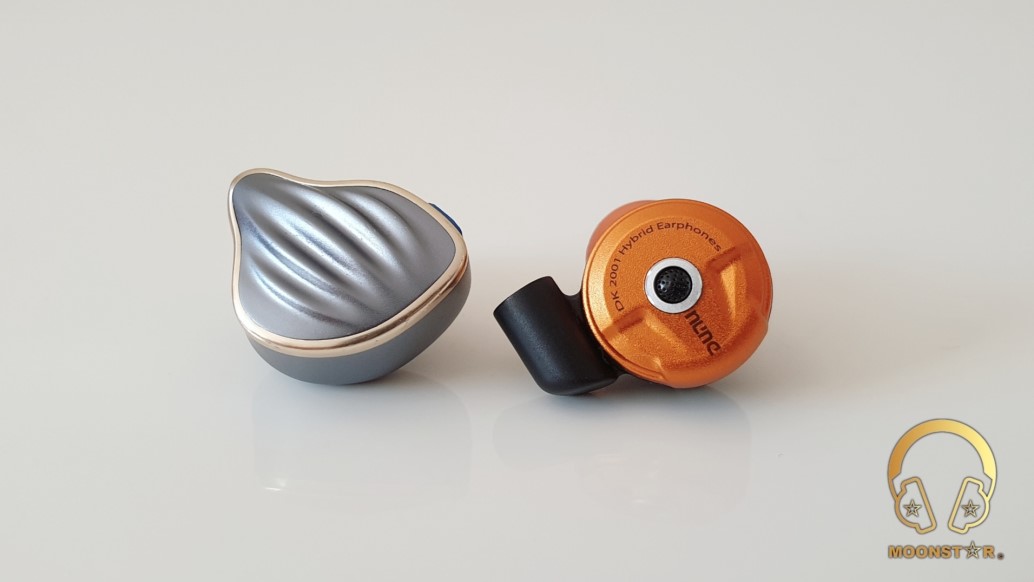 The treble range of the DUNU DK-2001 is more highlighted than those of the FiiO FH5. The DK-2001 is more successful IEM compared to the FH5 in terms of treble quantity, extension and detail.

Both IEM’s are successful in terms of separation and placement of instruments and vocals. The soundstage of both the FiiO FH5 and DUNU DK-2001 shows an average performance in terms of wideness, while the DK-2001 has a slightly advantage in terms of soundstage depth.

The DUNU DK-2001 is an excellent product when it comes to the sound performance, build quality and its accessories, with is entertaining sound signature and overall timbre which is suitable for many genres and the rock solid monitors that are bundled with a beautiful leather case + a Silver Plated OCC Copper Litz cable that features/supports the DUNU patented Quick Switching Connector mechanism.