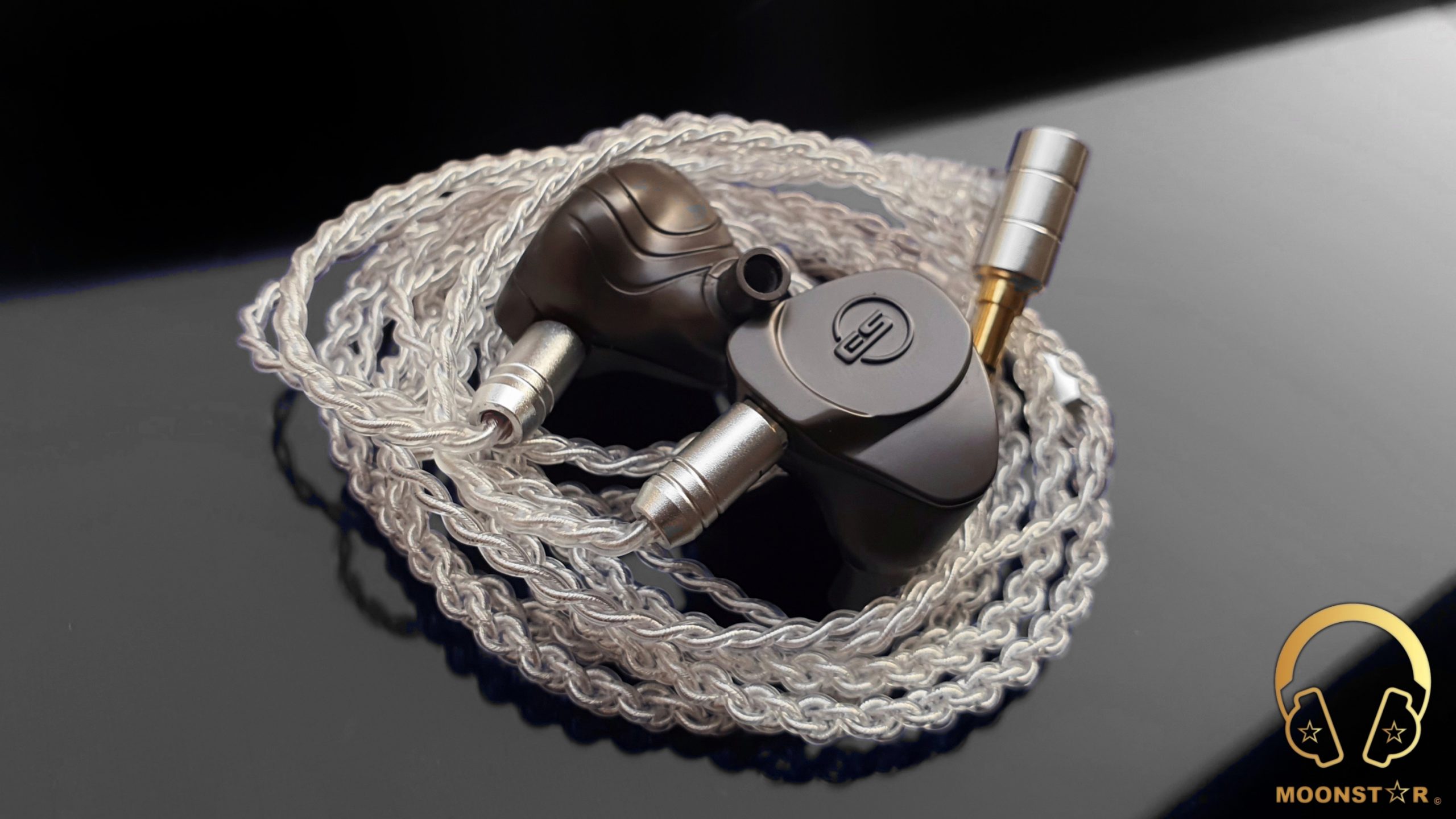 Earsonics is a famous French company that was founded in 2005 by Franck Lopez and is specialized in the design and production of Custom (CIEM) and Universal (UIEM) In-Ear Monitors and gained a high popularity in the Audiophile community with products such like SM3, S-EM6, SM64, SEM-9, Velvet and many more.

The Earsonics CORSA that I will now review for you is the latest Universal IEM of the company that features a 3BA Tripe Driver (3x Balanced Armature Drivers per side) configuration that are located inside a very robust Metal Shell with a 3D full Acrylic Structure that was originally designed for their new Hybrid range.

The CORSA features also some unique technologies developed by Earsonics such like an Impedance Corrector Crossover, EVS (Ergonomic Versatile Shell) and FUSION Technology and a so called TRUEWAVE system.

I would like to thank Earsonics for providing the CORSA Universal IEM as review sample. I am not affiliated with Earsonics or any third person beyond this review and all these words reflect my true, unaltered opinions about the product.

The actual price for the Earsonics CORSA is 399,00 EUR. More information’s can be found under the link below;

The Earsonics CORSA came in a relative minimalistic black cardboard box in black color that has the Earsonic brand logo on the top. 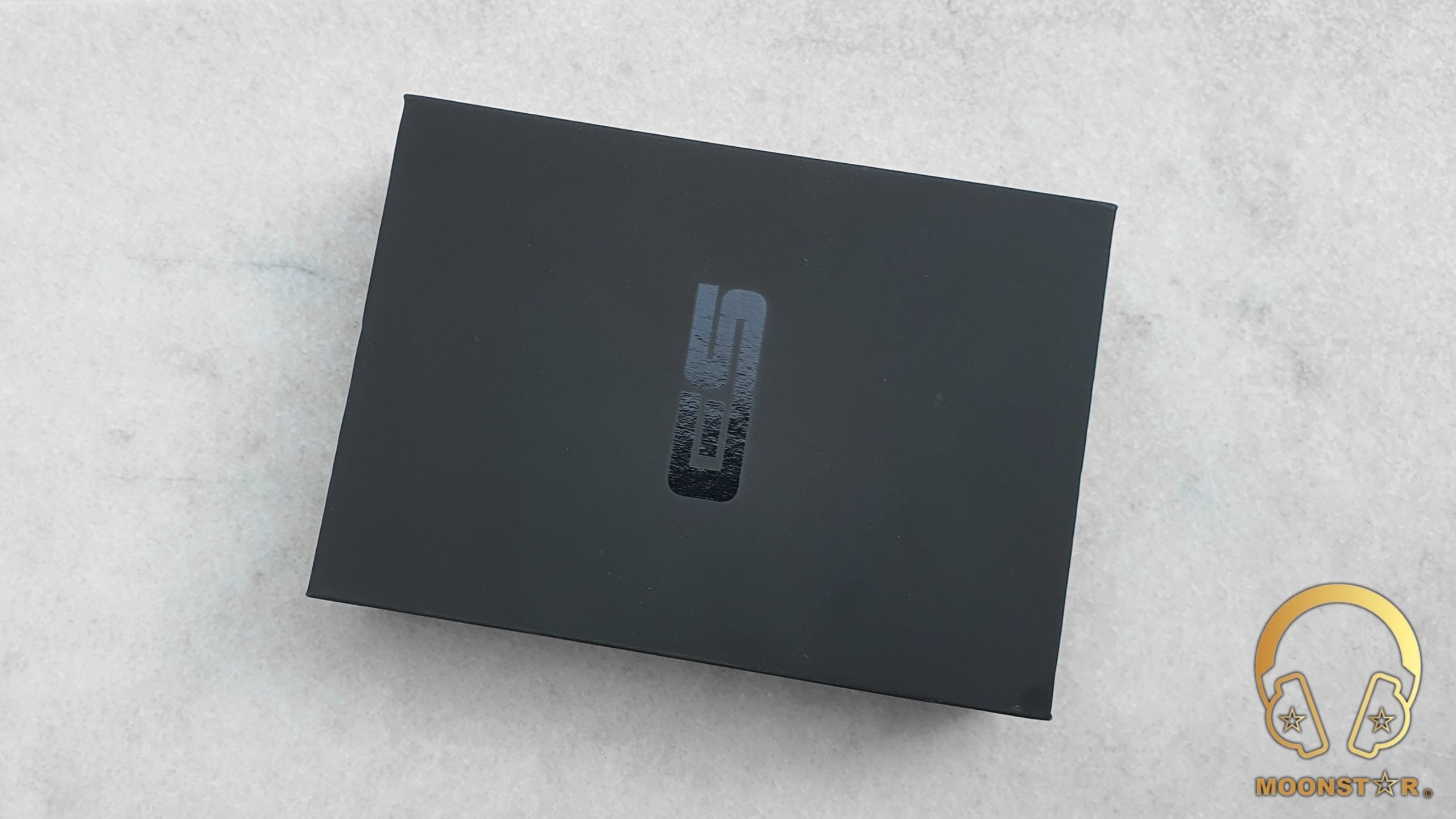 When you open up the top cover you will see the Monitors that are located behind two transparent windows and a “Thank You” writing in French language fro the founder & CEO of the company, Franck Lopez that was printed right below. 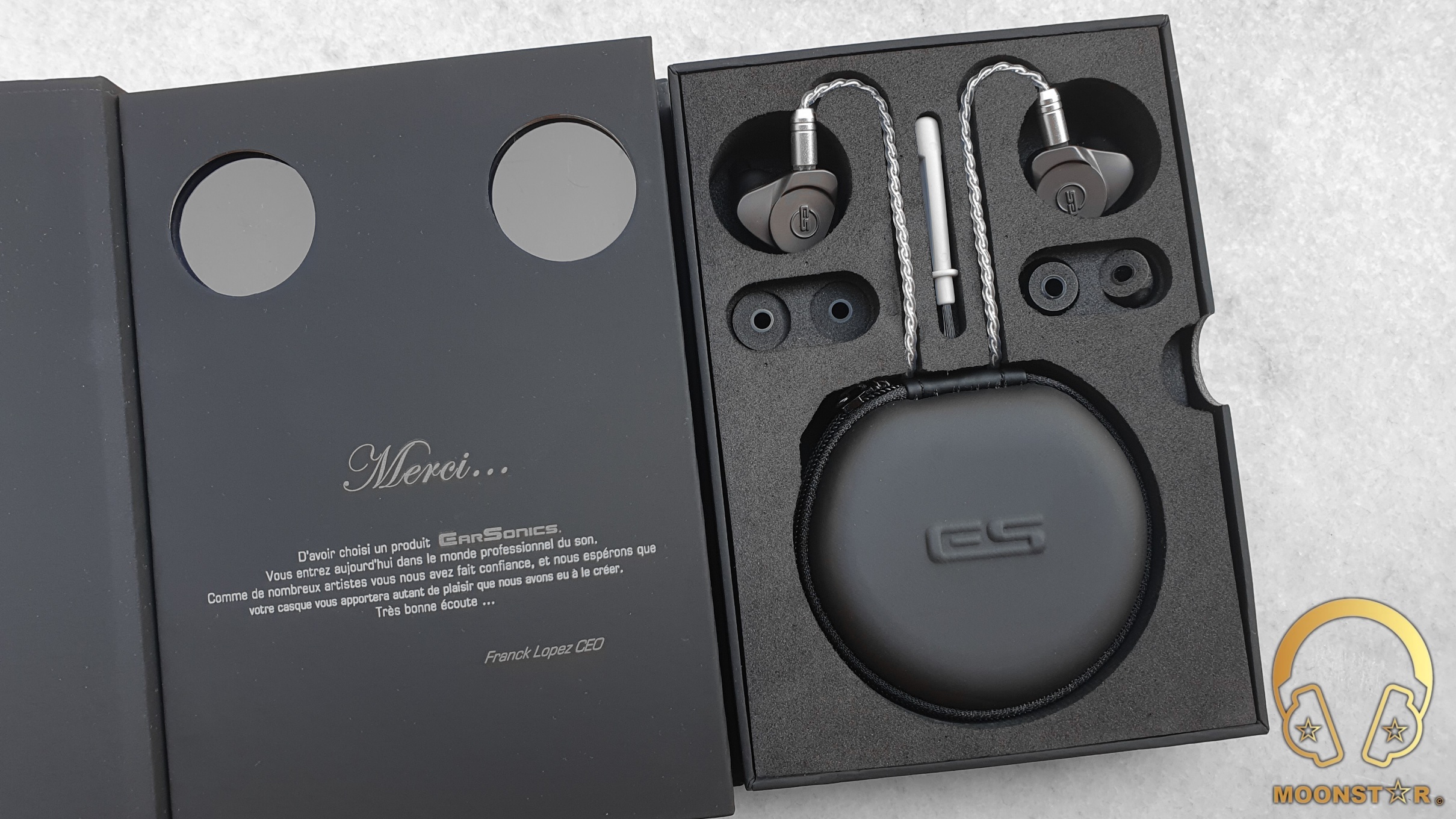 The Monitors and accessories are placed in to a Foam sheet that you can reach over the drawer you have to pull out from the side of the box. 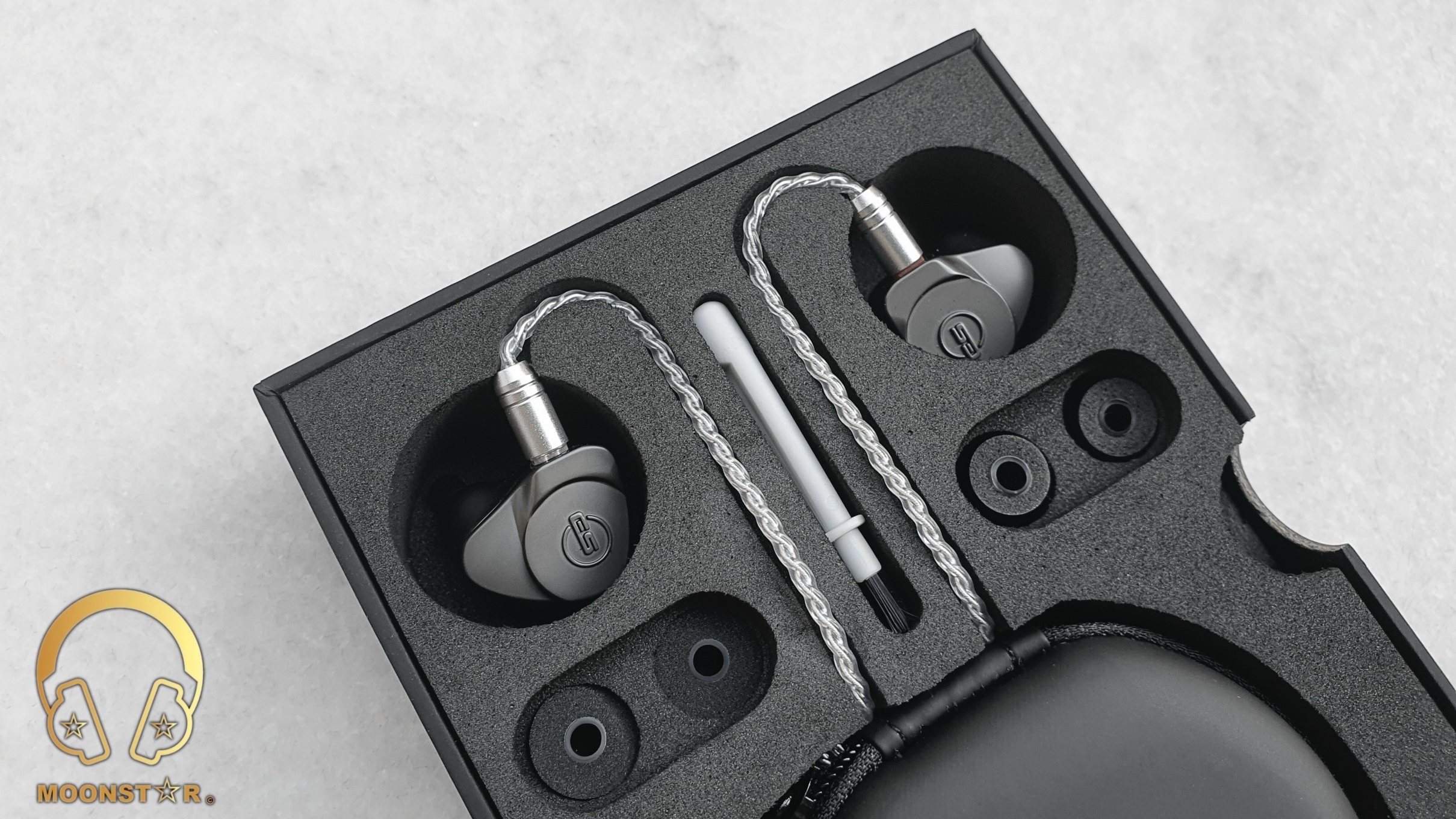 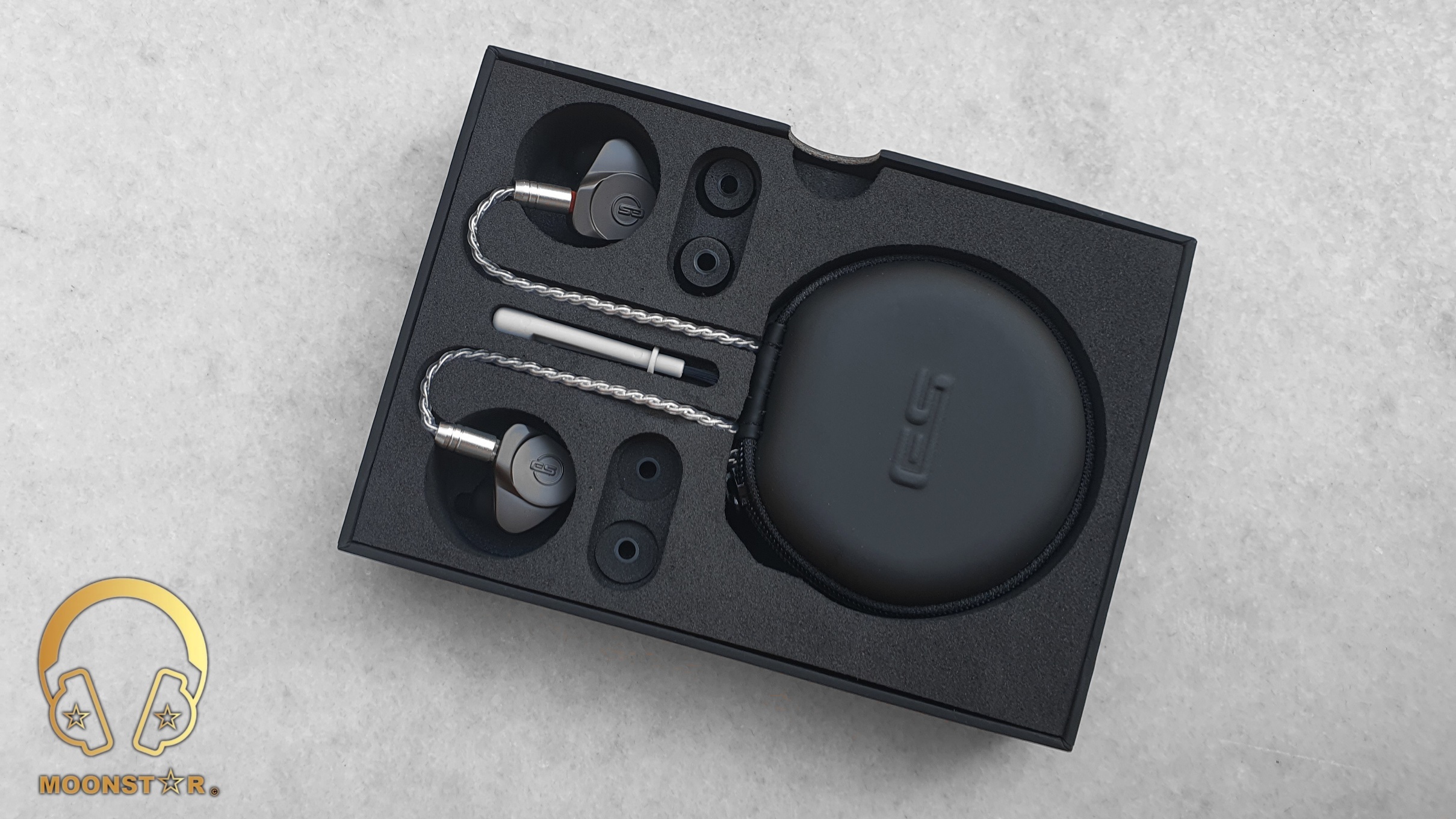 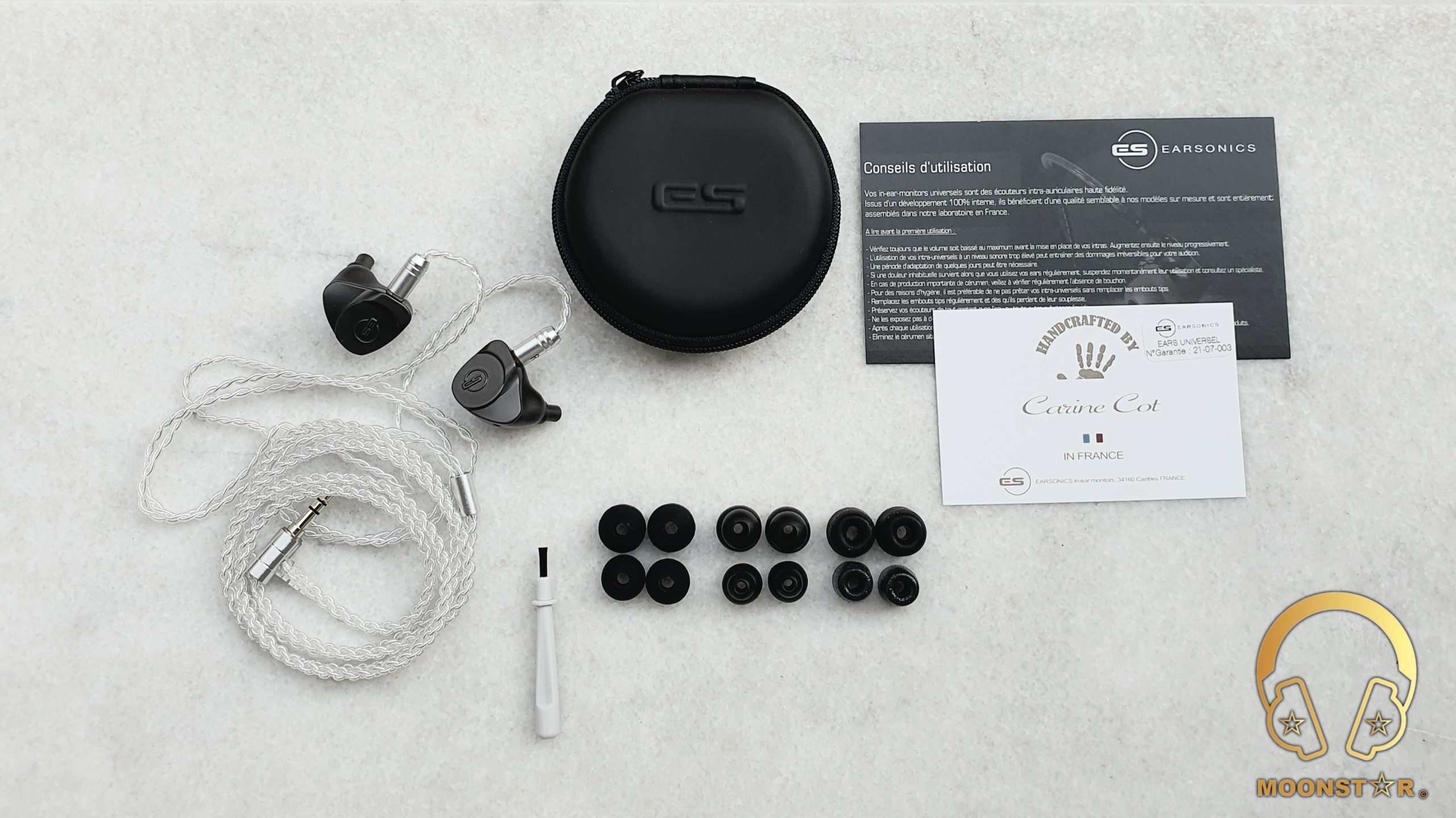 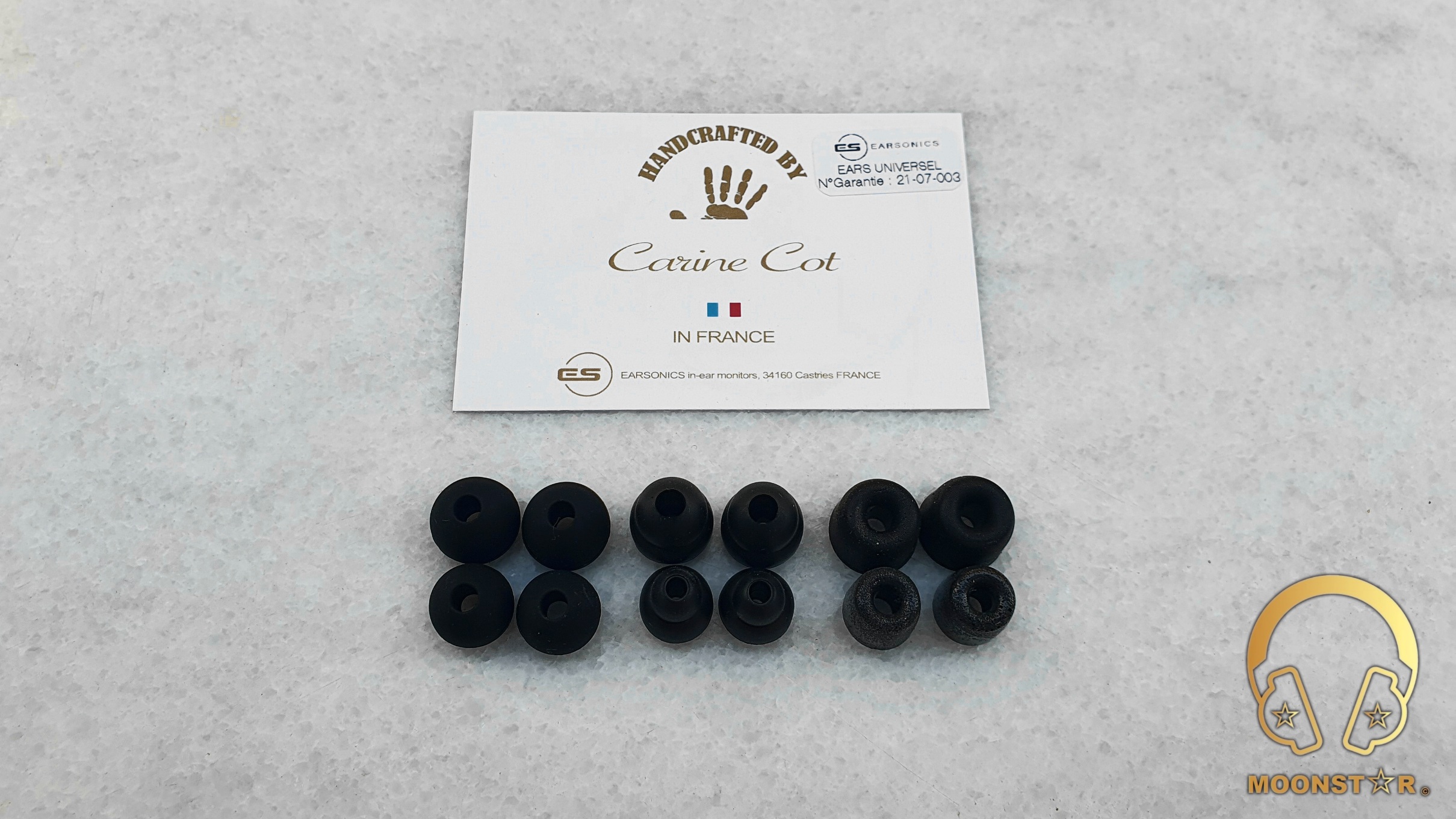 The zipper case is pretty small that ports the Earsonics (ES) branding on the top. 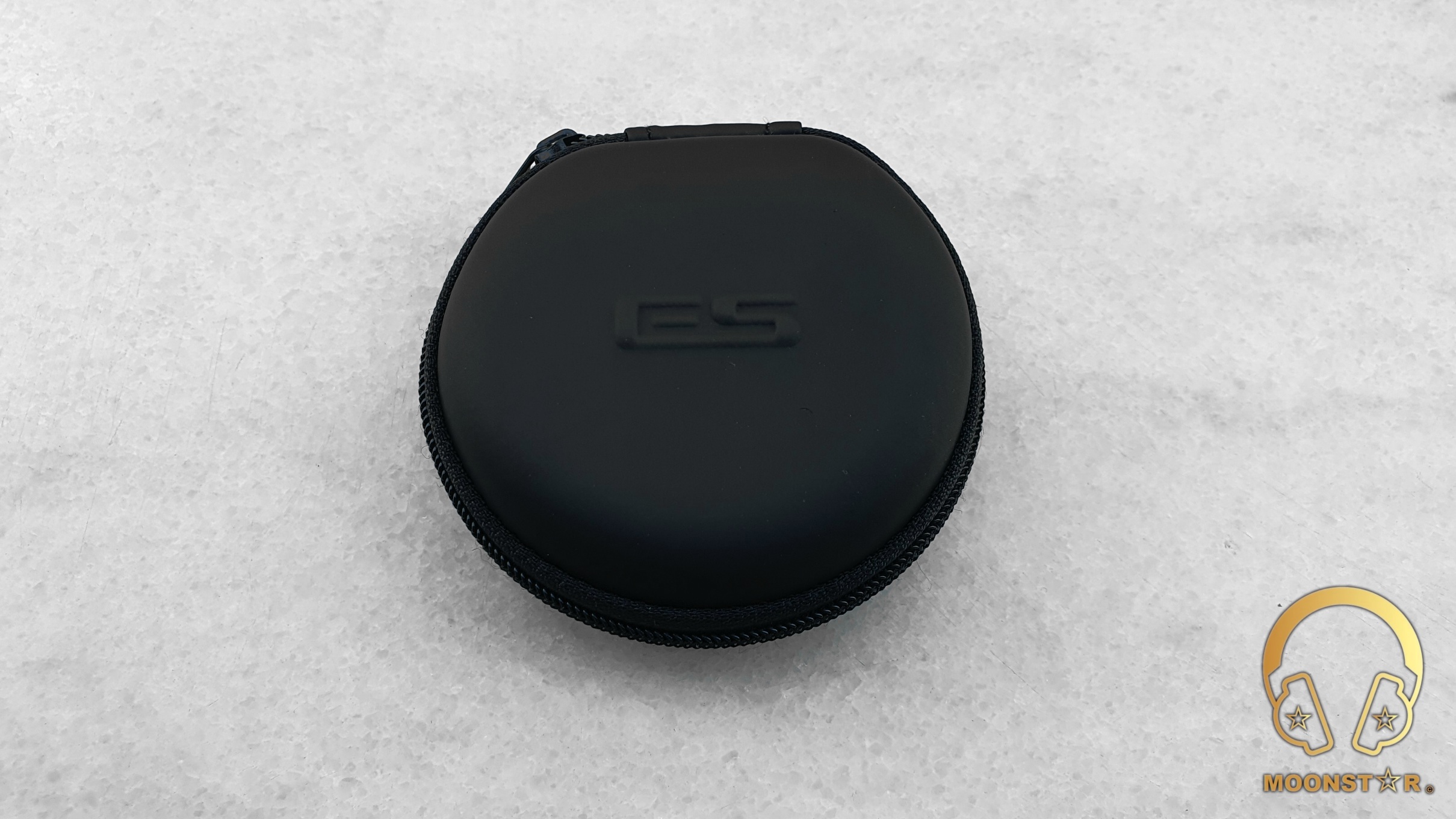 The first thing that came to my mind when I did look to the Earsonics CORSA was, WOW those are some solid looking & feeling Monitors. I am familiar to Earsonics products and have had owned the SM64, Velvet (first GEN) and S-EM9 all those models did sound very good in their own way, but the common complaint of my and the community was the use of plastic material. 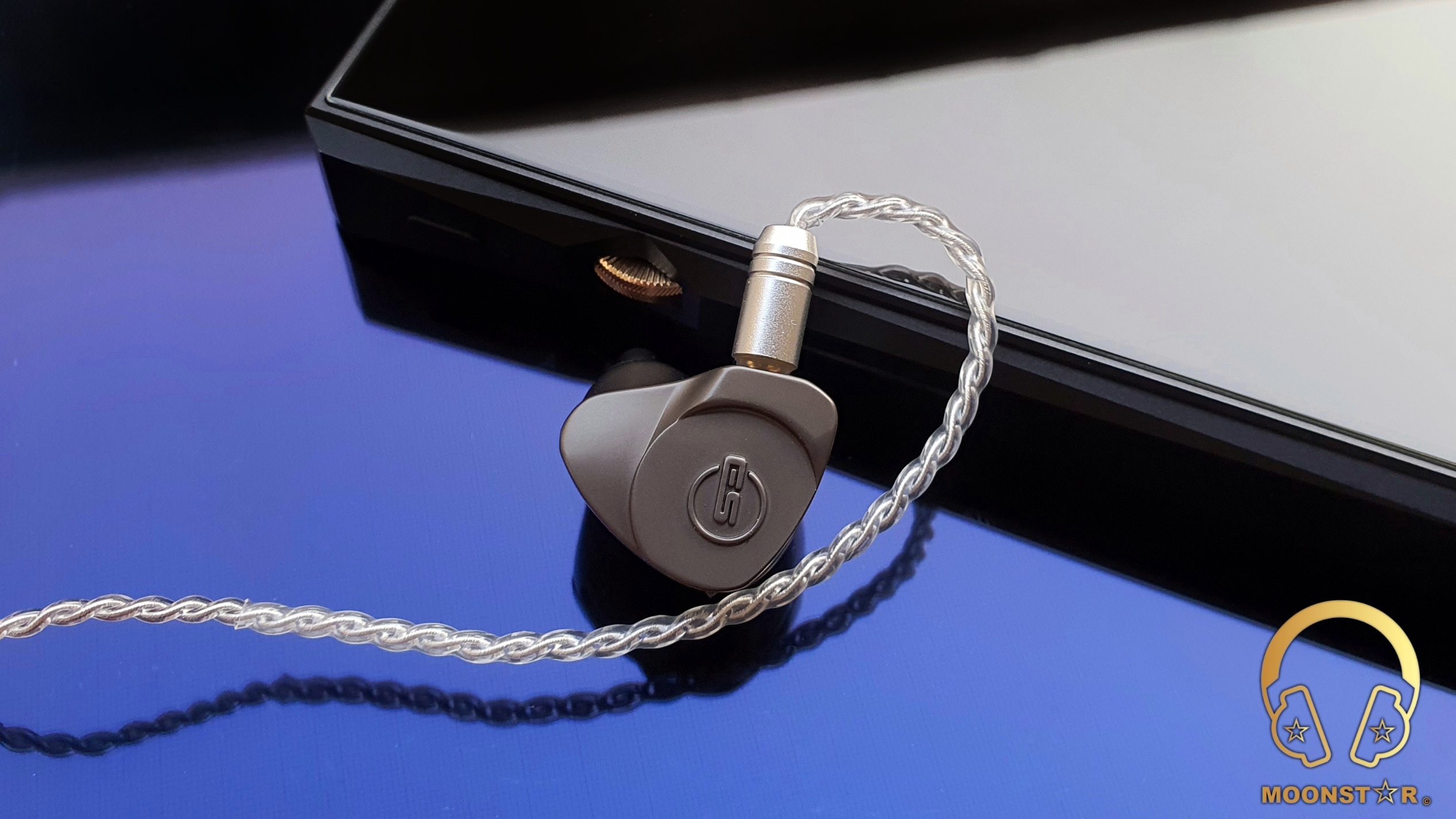 The monitor housing is made of Metal material of very High Quality that looks and feels very robust, almost like a tank. Each monitor features 3x Balanced Armature Drivers that are located inside the “3D full Acrylic Structure” the Heart of the CORSA, which was originally designed for their new Hybrid range. The CORSA features also some unique technologies developed by Earsonics such like an impedance corrector crossover, EVS and FUSION Technology and a so called TRUEWAVE system.

On the front of each Monitor shell, the so called “Faceplate” are the Earsonics “ES” brand logos that gives the CORSA a nice looking appearance. 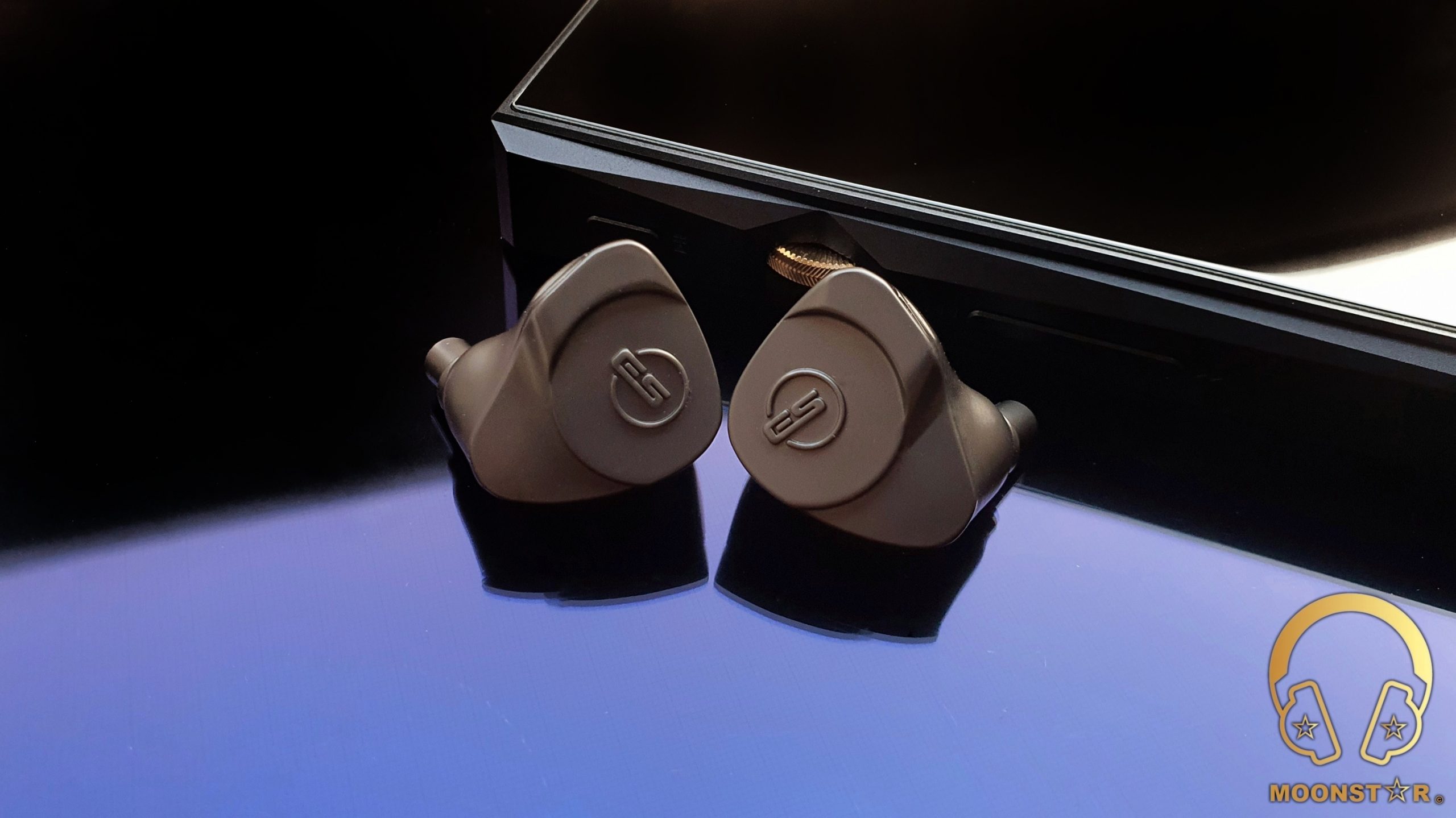 At the inner surface of the main body are some artistic notches in form of waves; the slightly angled sound nozzles and a pretty small screw to fix the faceplate to the main body. 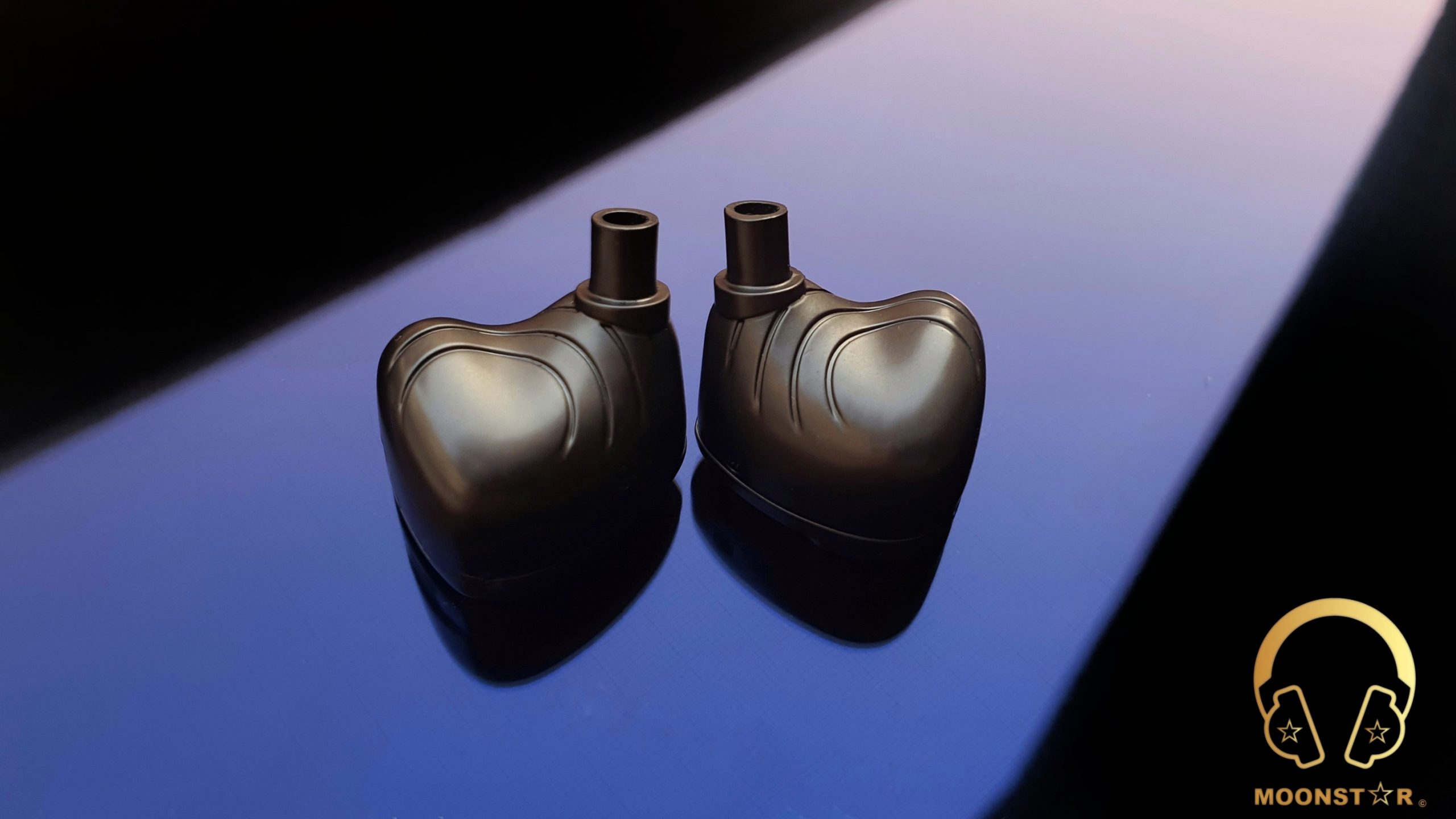 Each sound nozzle has a filter inside the bore to prevent the insertion of particules such like dust, ear-wa, etc. 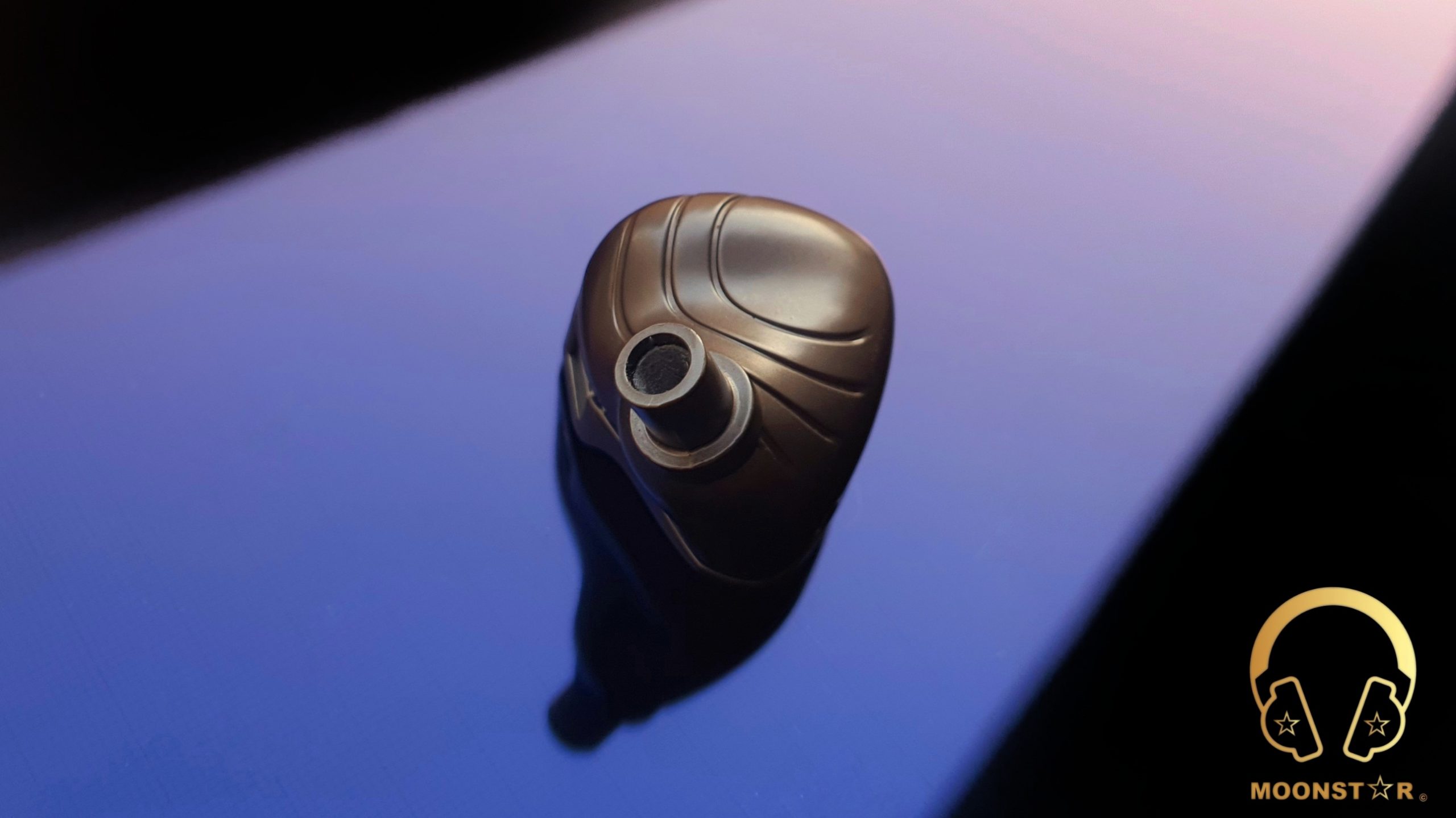 On the top of the monitors are the 0.78mm diameter 2-Pin female connectors that do offer a very tight and secure fit. 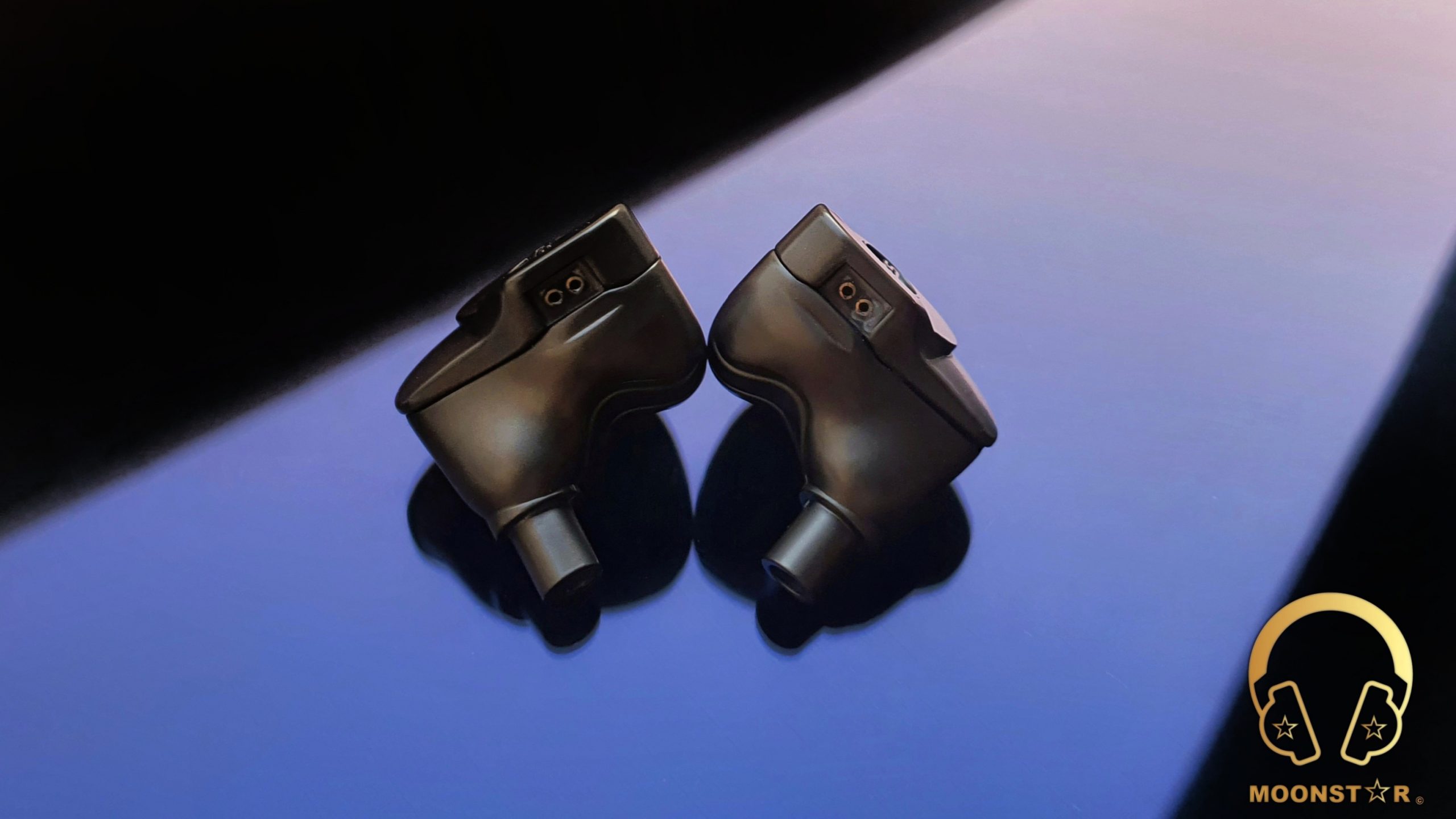 At the rear surface of each monitor are the second fixing screws and grid-shaped openings that give the CORSA the look of an expensive sports car, simply eye-catching! 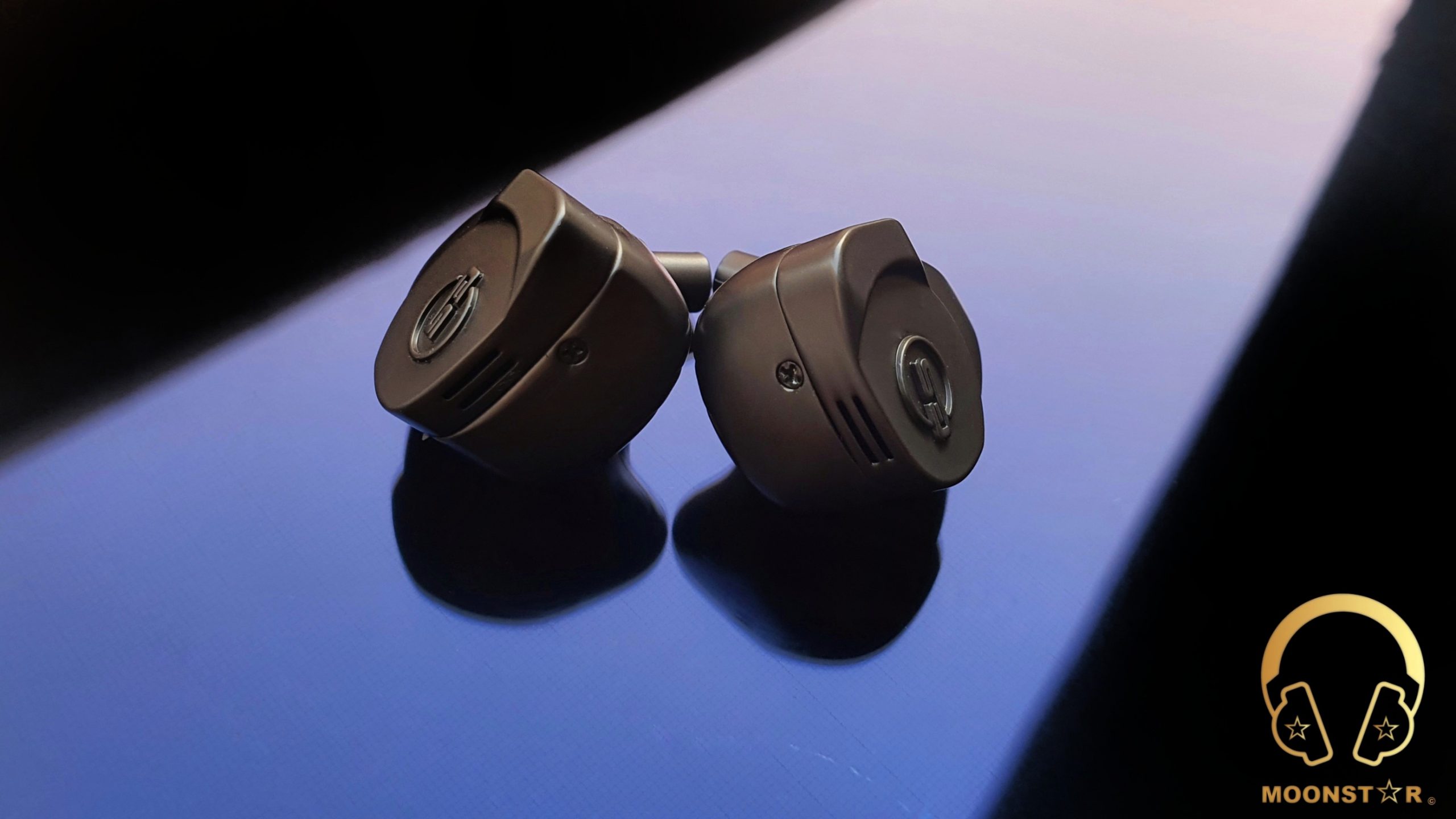 The Earsonics CORSA comes with a braided 4 core Silver Plated Cooper wire cable that has a soft transparent insulation. This cable shows a very low amount of microphonic effect and is also not prone to annoying mixings. 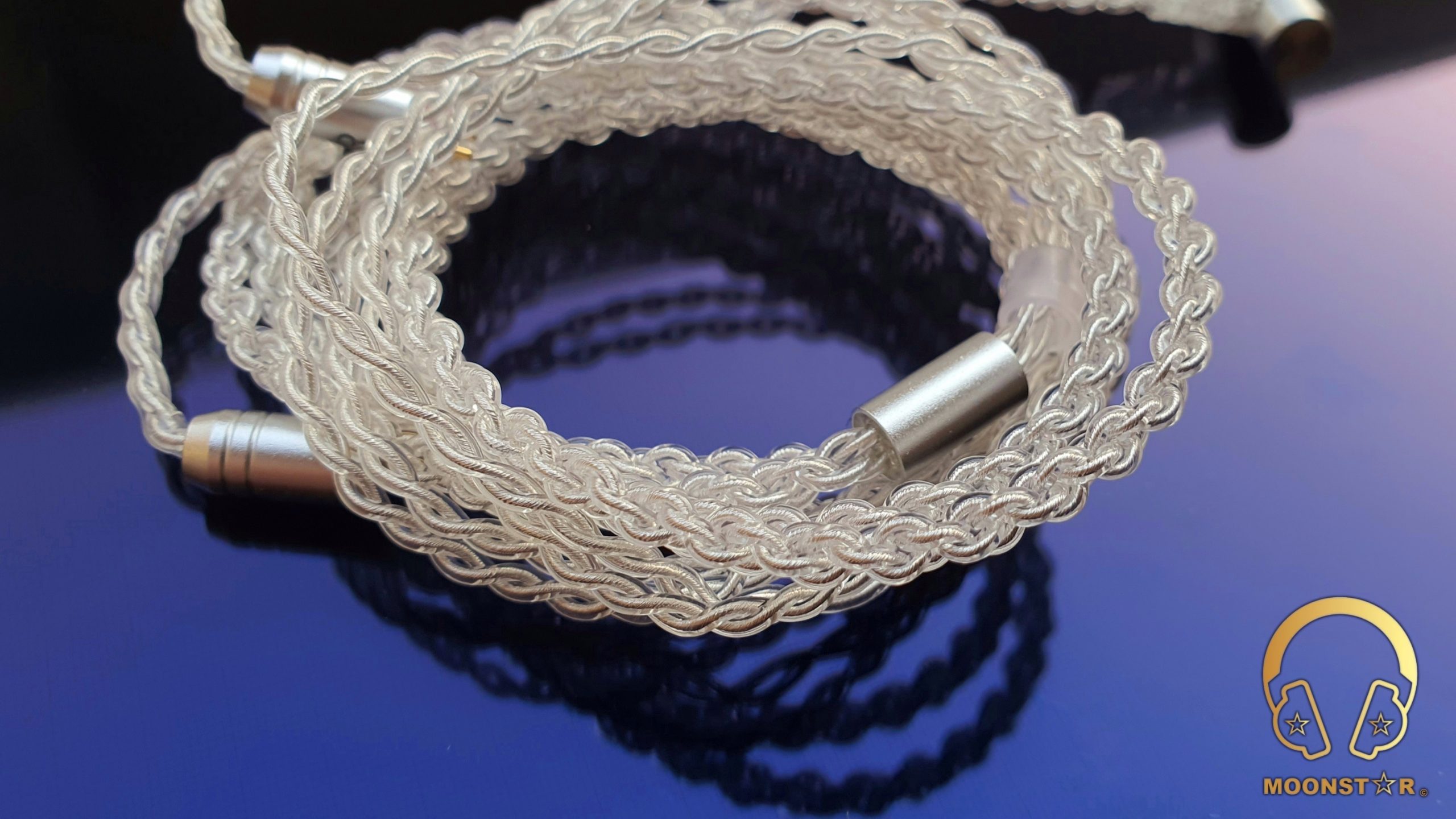 The 0.78mm diameter 2-Pin male connectors do have a metal housing in silver color that do post both left and right markings and color indicators (red for the right connector). 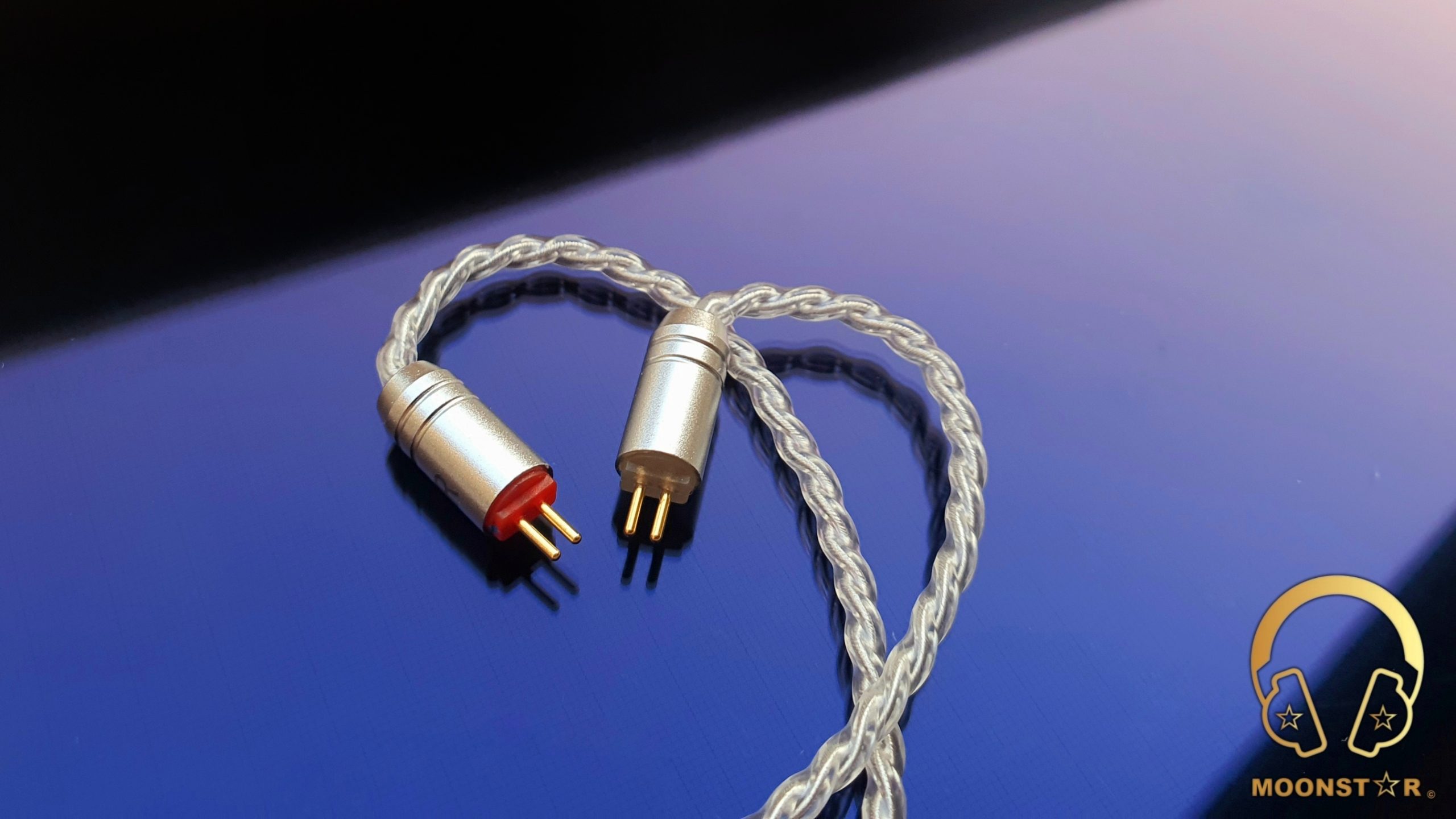 Near the connectors are transparent heat shrink ear guides for a more comfortable over the ear wearing experience, which works pretty well especially on the go. 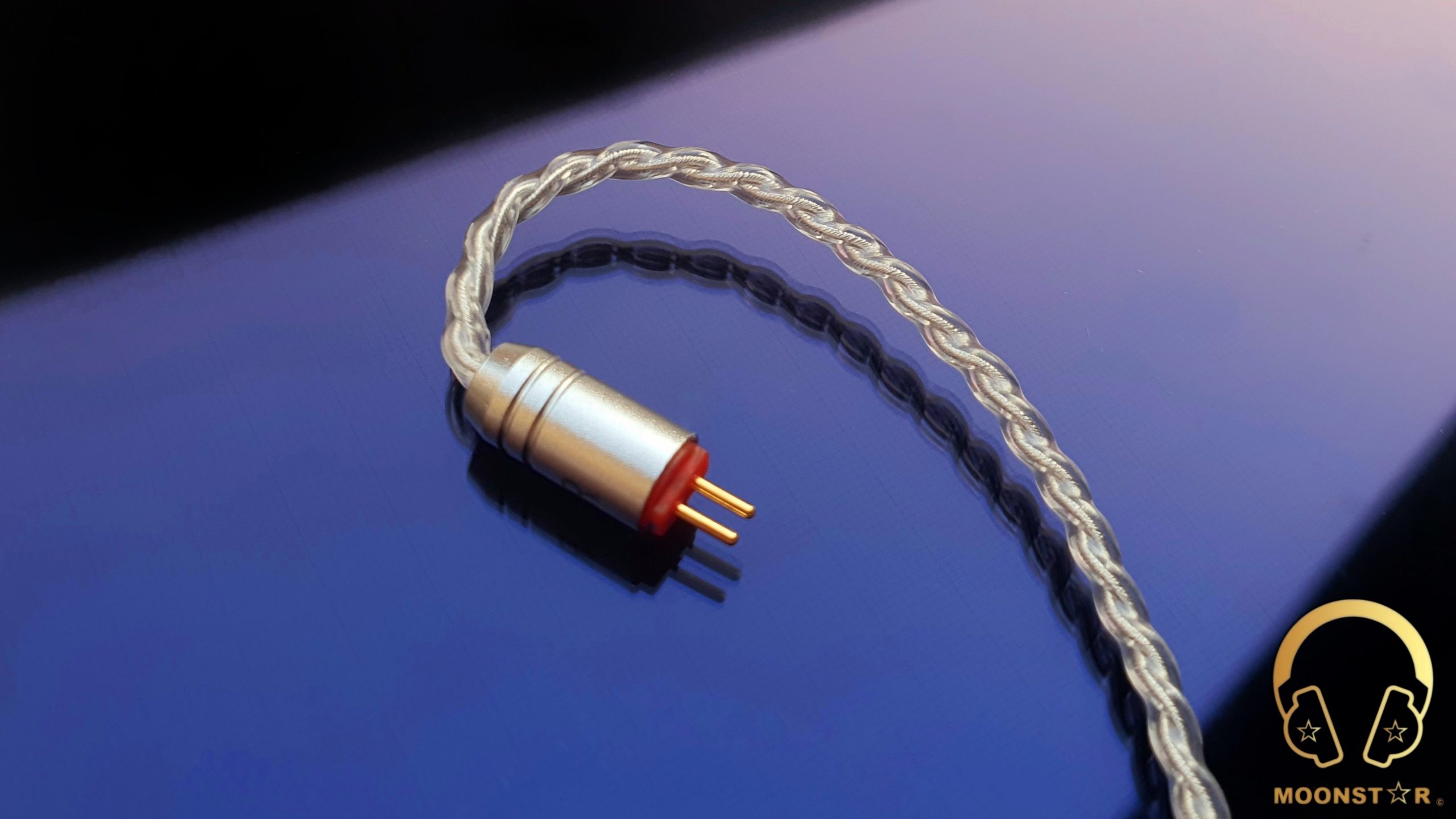 The cable features a transparent plastic chin slider and a metal Y-Splitter in the same silver color with the Earsonics branding on the top. 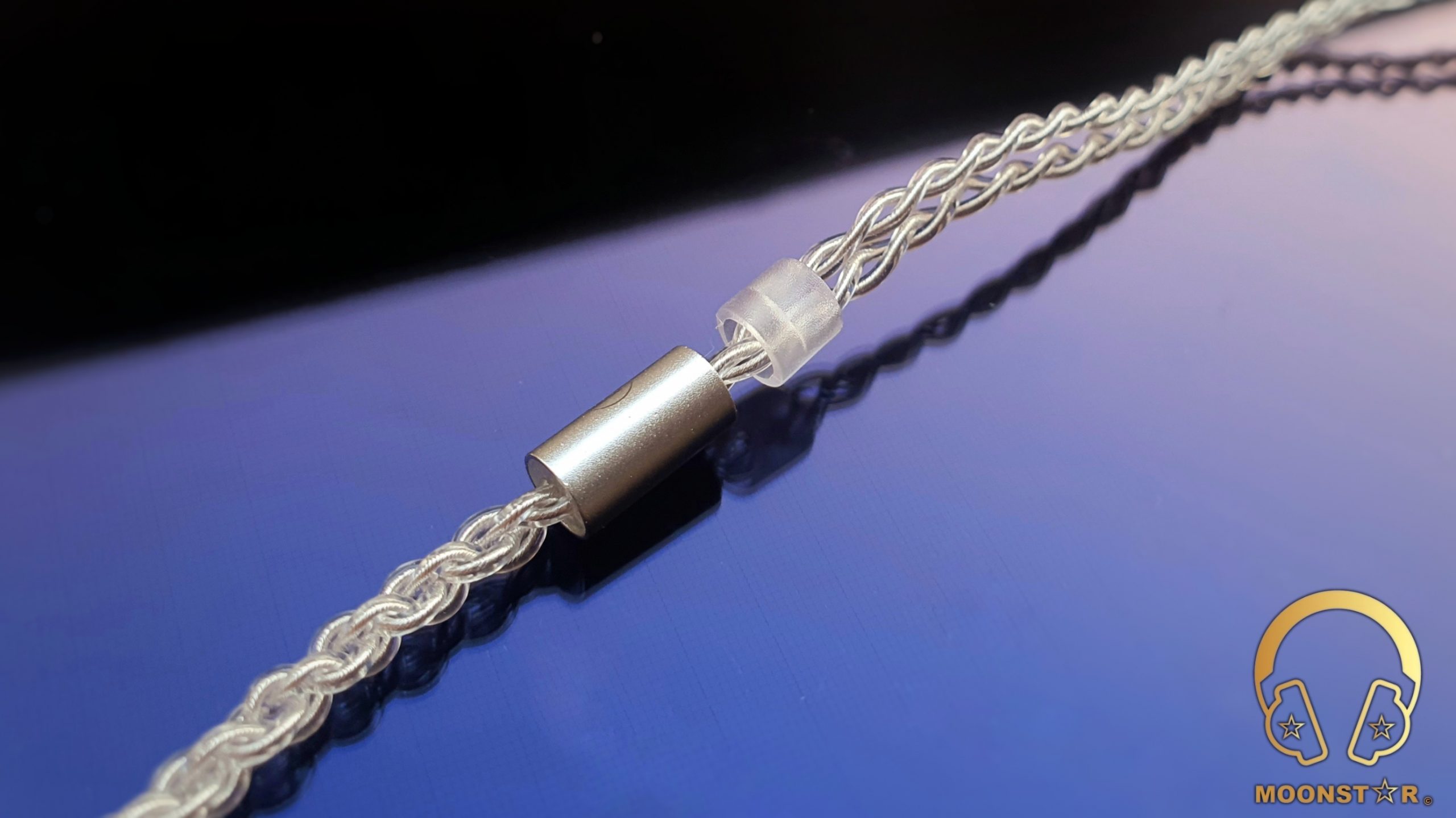 The 3.5mm Single Ended headphone jack has a L profiled metal housing in silver that sports a transparent strain relief for extra durability. 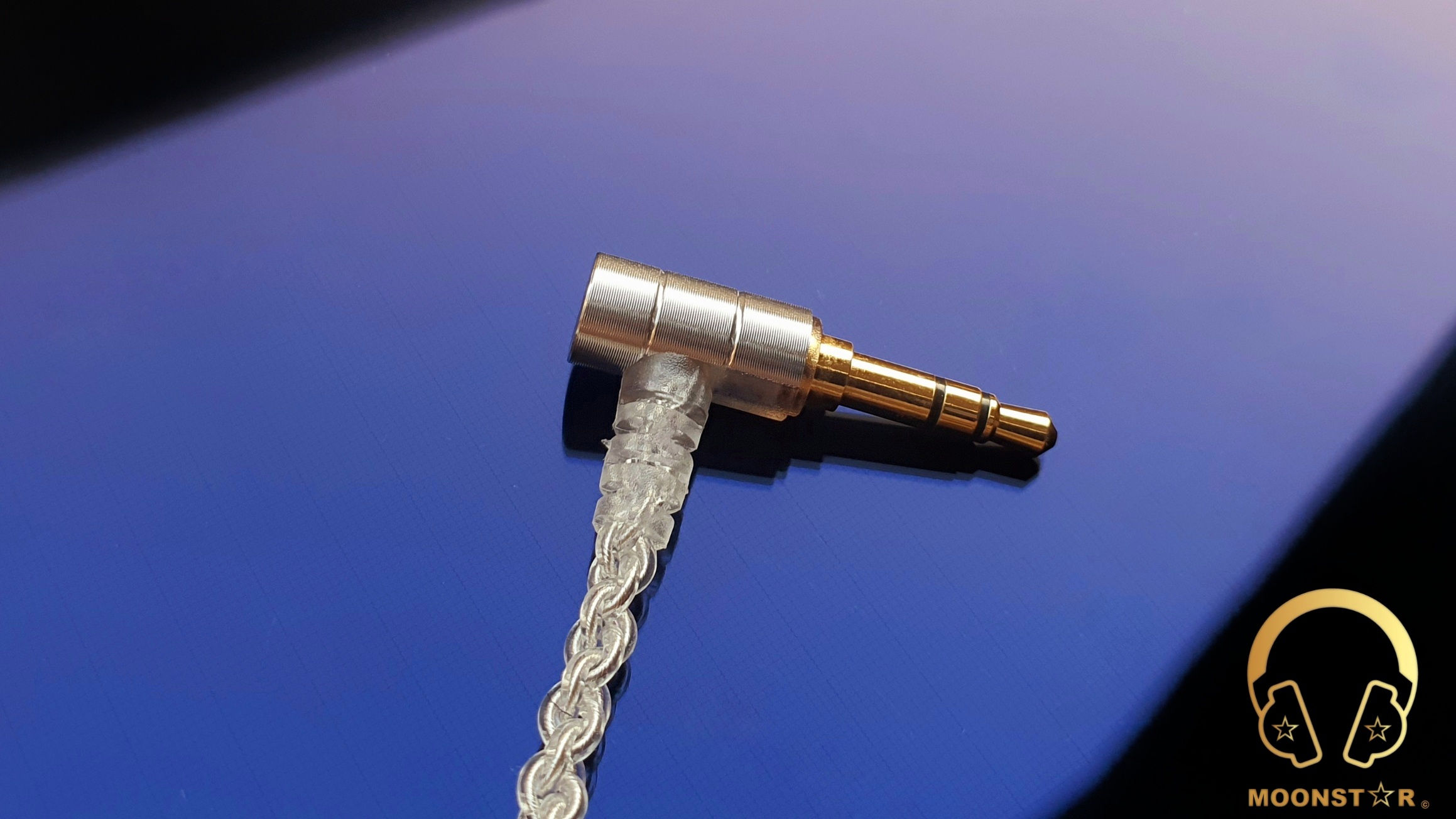 The Earsonics CORSA is a Universal IEM with a shell that has a fairly comfortable shape and fits perfectly in to my average sized ear concha’s. The passive noise isolation of the monitors is on an average level that is sufficient enough for the use in relative noisy environments like a metro, bus or train.

The Earsonics CORSA is a relative efficiently In-Ear Monitor with an impedance of 31 Ohms and sensitivity of about 119dB, which makes it fairly ideal for the use with sources like Smartphone’s or Tablets that do have in general relative weak amplification capability.

However, If you want to hear the full potential of those IEM I highly recommend you to use a sources with better amplification that has a neutral or closer to neutral presentation especially towards the lower frequency region. 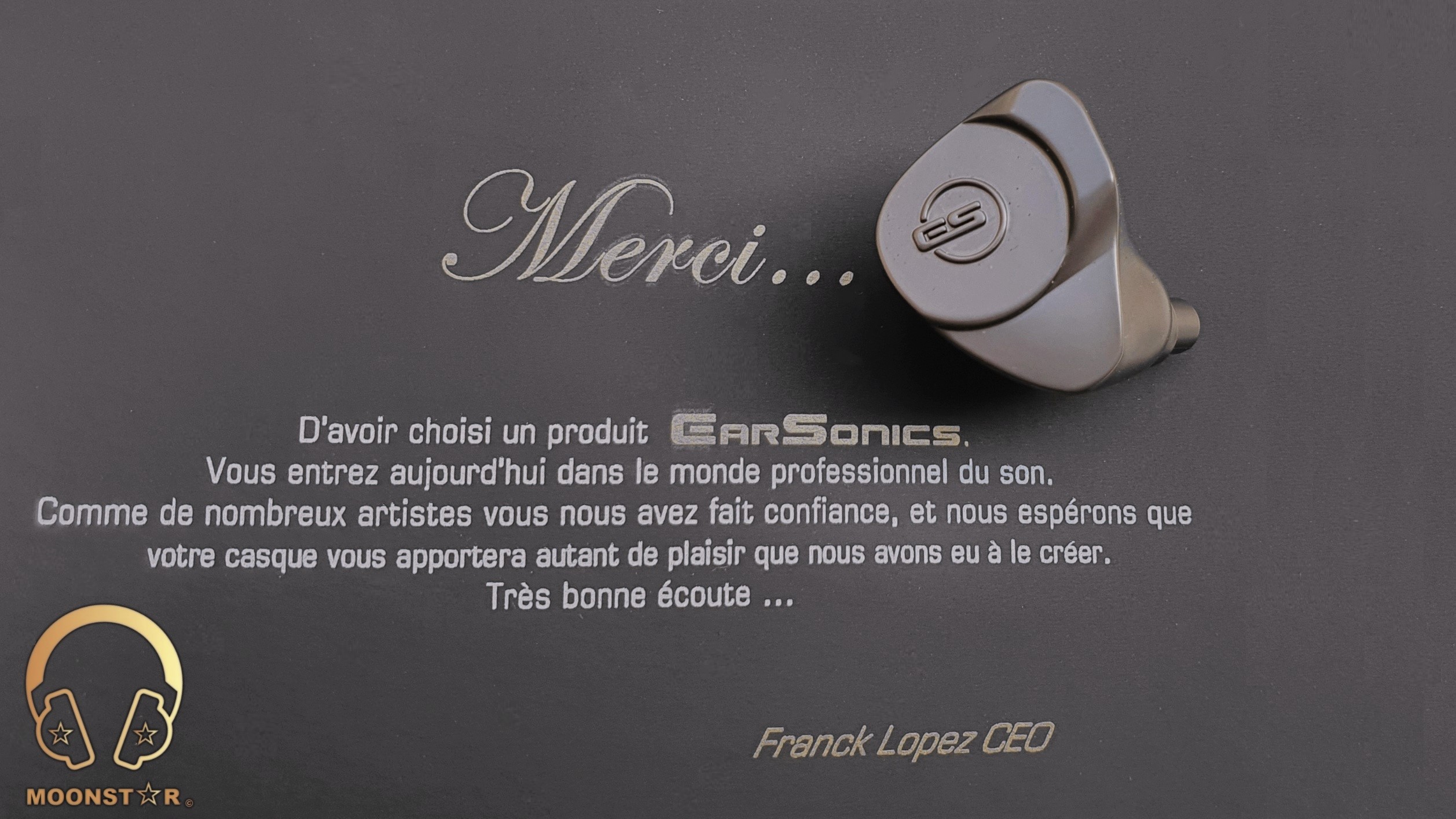 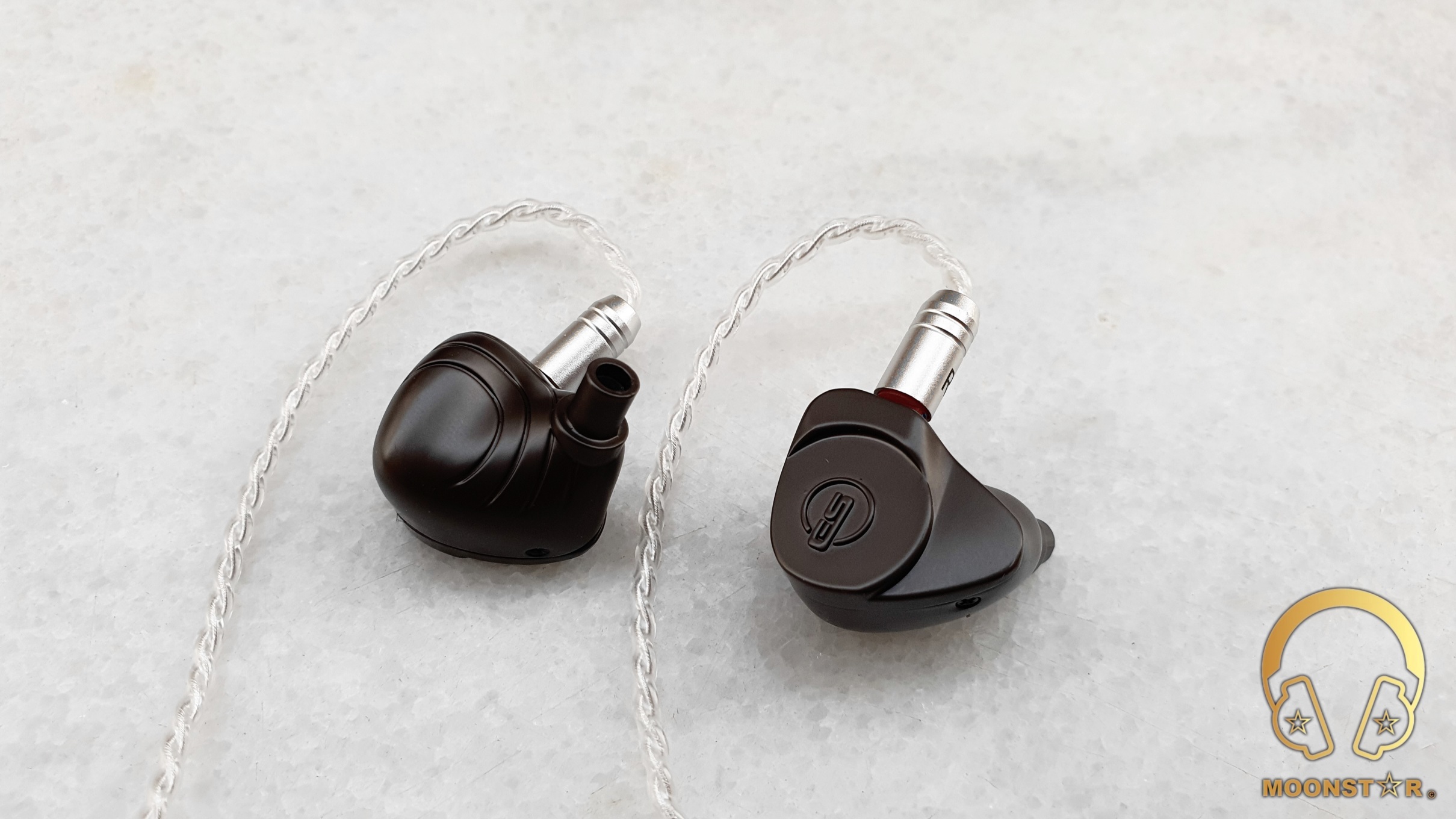 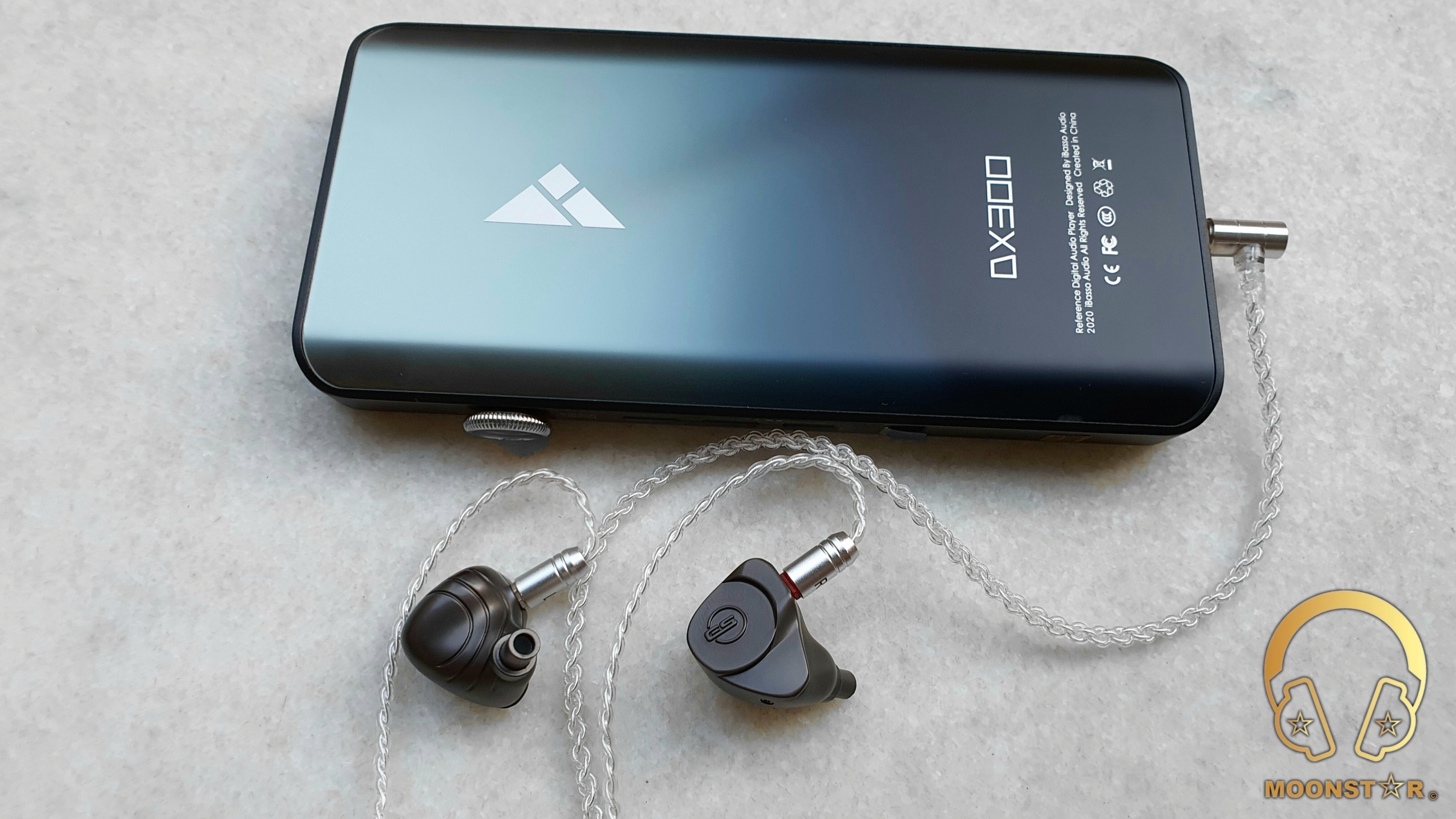 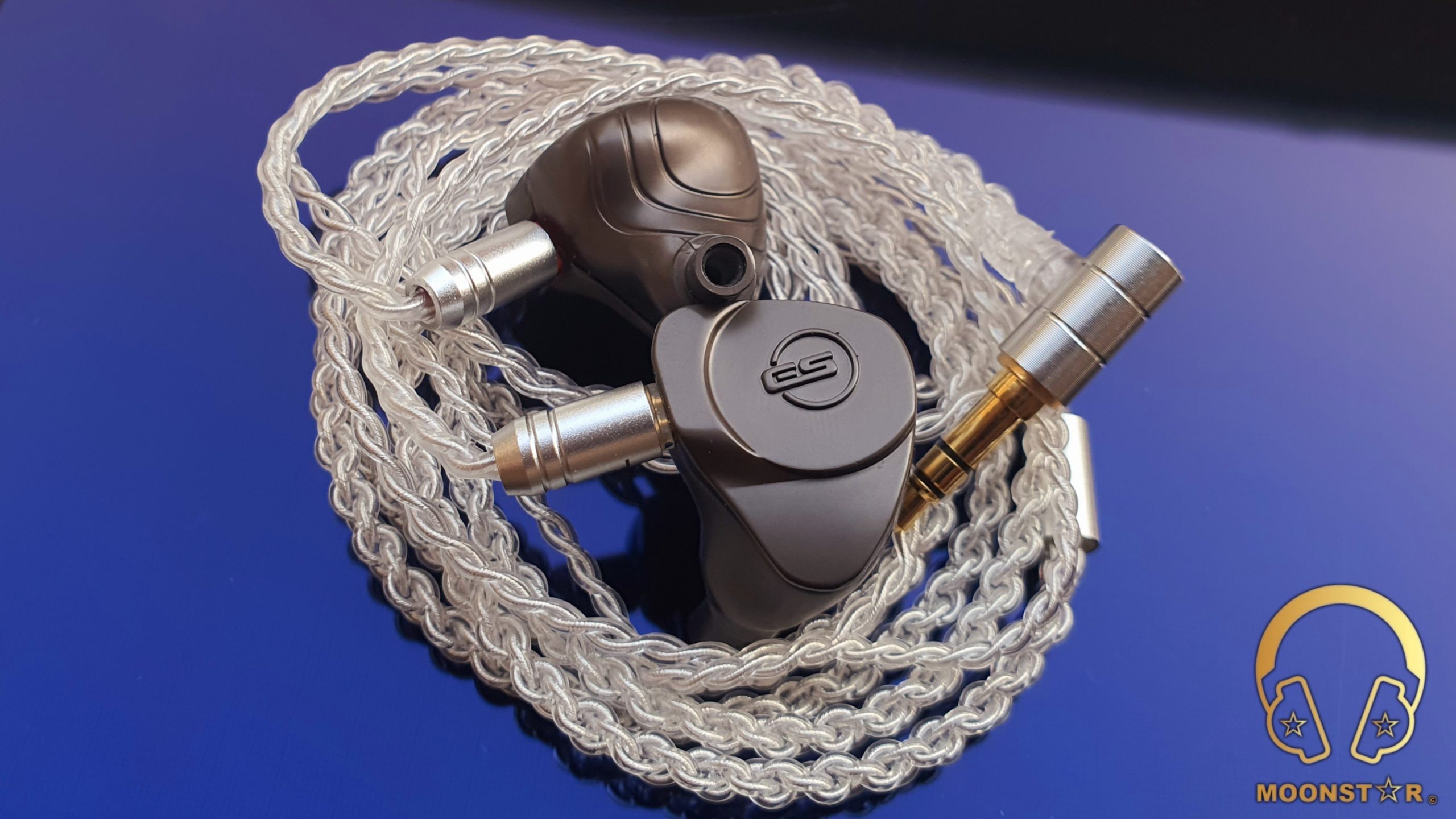 The Easronics CORSA offers a very controlled overall sound presentation with a pretty dark background and a warmish tonality. The bass is pretty fast and controlled that shows in general a moderate sense of in intensity with focal point in the midbass region. The midrange is fairly upfront, transparent and detailed, while the treble range is the most highlighted part of the CORSA, which offer a good level of extension, airiness and sparkle without to sound sharp or shouty.

The Earsonics CORSA shows a pretty linear bass response with focal point in the midbass region. It offers a great sense of speed, control and layering thanks to its well tuned Balanced Armature driver.

The subbass region shows in general a moderate level of depth and rumble when I do listen to songs like Christian Reindl’s “Freya”, Massive Attack’s “Angel” or Lorde’s “Royals”, while the performance in terms of subbass decay is pretty good. Instruments such like bass guitars, electronic synthesizers or drums are reproduced with a sufficient level of subbass depth and intensity.

The midbass region of the Earsonics CORSA is more pronounced compared to the subbass area and still maintain the linear and fairly accurate character. The hallmark of the midbass area is the speed, tightness and above average resolution that I have pretty enjoyed during this review.

For example, string instruments like acoustic guitars and cellos are shown with an moderate amount of fullness and weight, while drums like snare and kick drums do are fairly impactful without to sound veiled if you feed the CORSA with good recorder tracks. 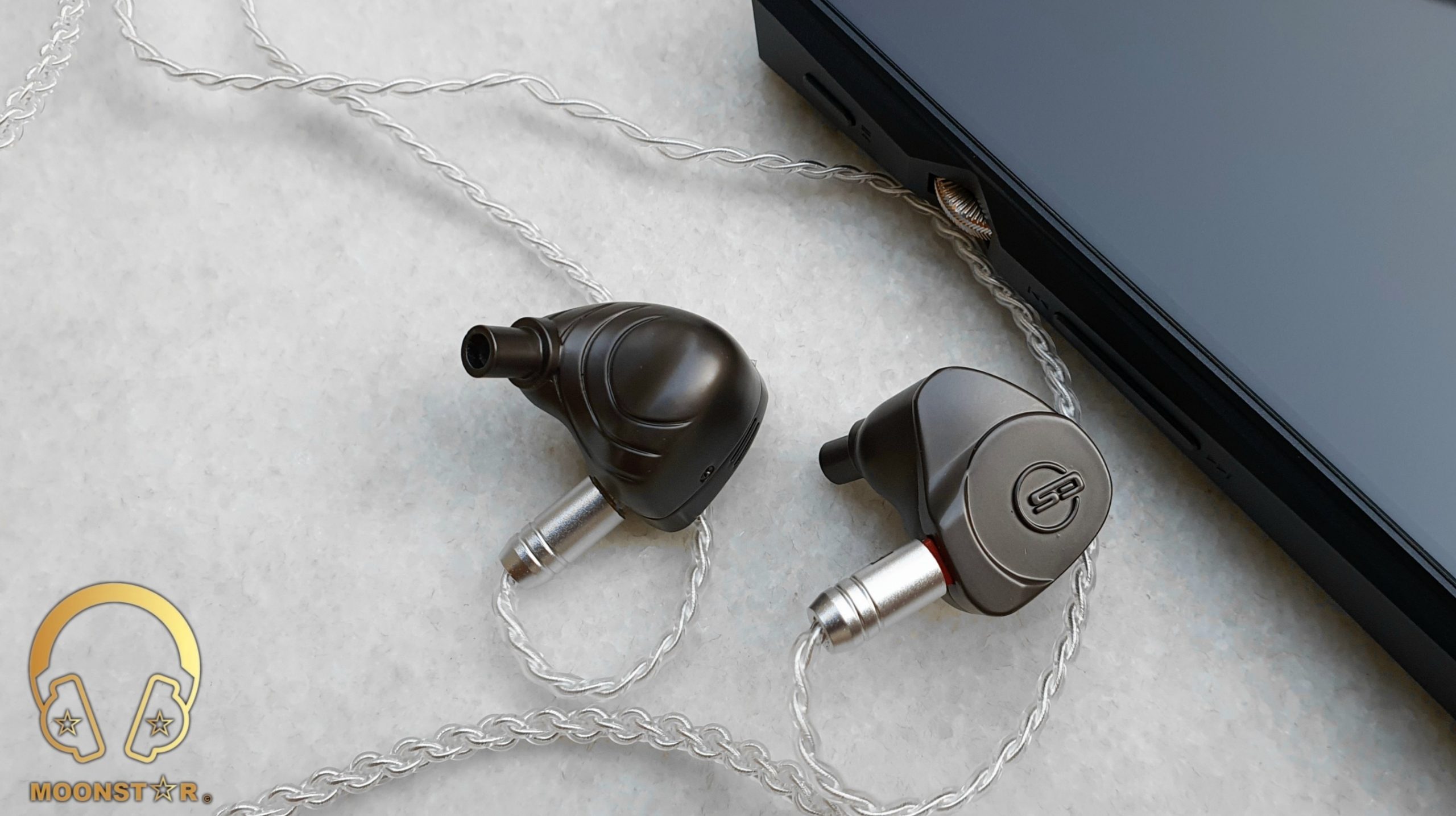 The Erasonics CORSA shows a pretty forward midrange presentation with a mildly warm and quite musical tonality that I have had experienced also with other Earsonics IEM’s in the past. The level of transparency and airiness is on a good level, while the vocal presentation is fairly intimate and emotional.

The midrange of the CORSA shows in general a good level of clarity and resolution thanks to the nicely adjusted Balanced Armature driver that was dedicated for this area. The lower midrange is less accented compared to the upper midrange region and shows average sense of depth and body. The upper midrange on the other hand is able to produce a great level of airiness, dynamism and resolution without to shows sibilance or sharpness that I highly enjoyed.

I really like the general tonality of the midrange when I do listen to both male vocals like Serge Gainsbourg, Barry White and Elton John or to female vocals like Edith Piaf, Aretha Franklin and Sertap Erener that where reflected by the CORSA with a nice sense of intimacy and emotion.

Instruments o the other hand do have a nice natural and organic timbre. Instruments from pianos, clarinets and flutes up to acoustic guitars or violins are reproduced with an efficient level of transparency and extension thanks to the nicely tuned midrange & upper midrange character.

The treble range of the Earsonics CORSA is pronounced, while the tonality is mildly warmish and forgiving. The transitions form the upper midrange towards the lower treble area sounds in general controlled especially when instruments do play at high level of distortion.

The clarity and definition in the lower treble region of the CORSA is on an adequate level when I do listen to soprano vocals or to instruments like violins and clarinets in classical music or saxophones or trumpets in jazz music. The general resolution and extension in this area is on a moderate level.

The upper treble region is able to produce a sufficient sense of airiness and sparkle, while the extension is slightly short when I do listen to instruments such like snare drums, hi-hats and cymbals.

What I like about the presentation of the Earsonics CORSA in this area are the rounded edges of the treble that do avoid any over-sharpness and irritation, which makes it ideal for longer listening periods without to loose the sense of brightness and airiness. 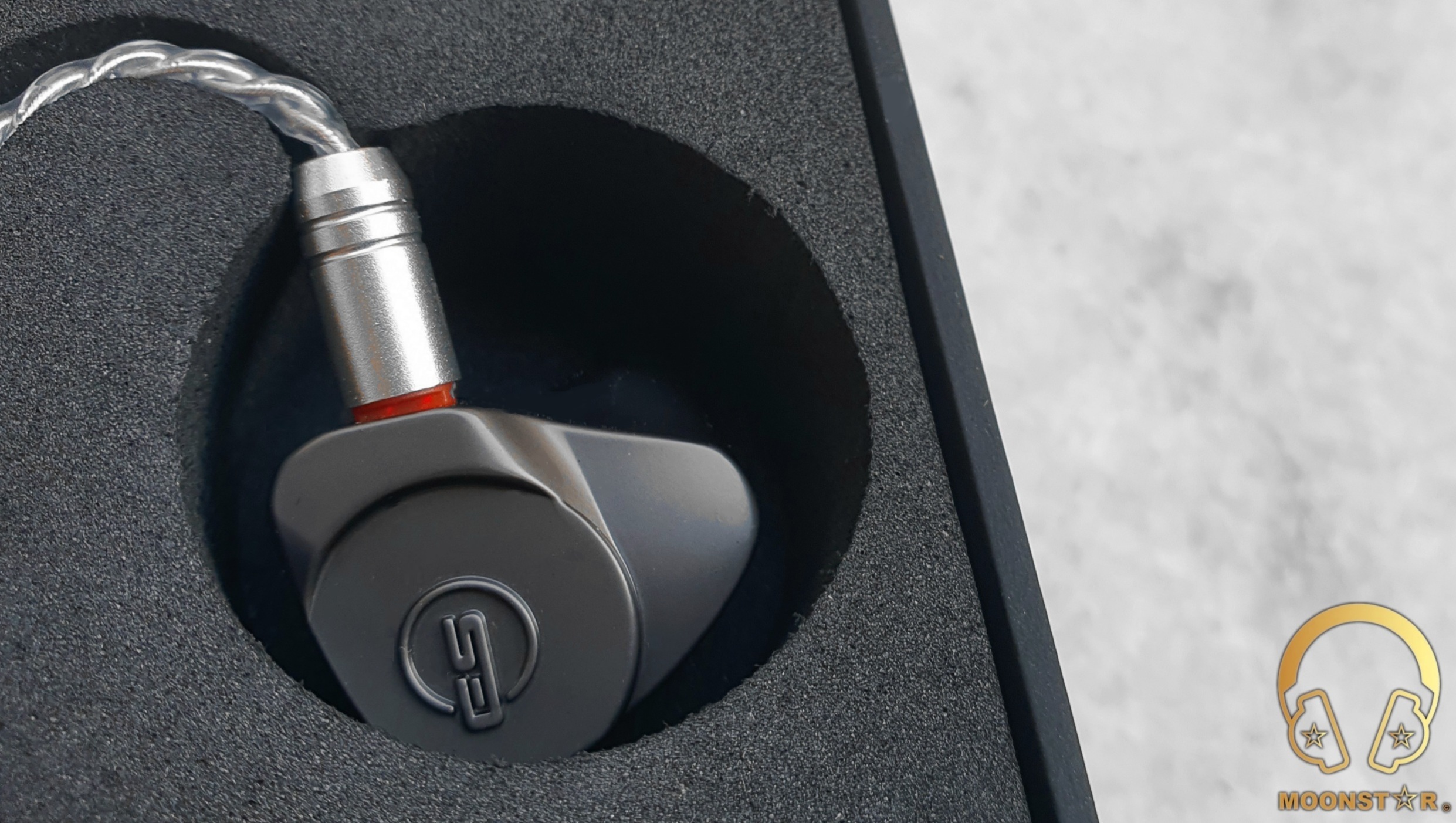 The Earsonics CORSA shows a pretty airy and spacious soundstage presentation with good sense of depth and wideness. There is enough space and air rendered between vocals and instruments and the positioning, layering and separation is in general on a pretty good level for an In-Ear Monitor at this price range.

The Earsonics CORSA shows a warmer tonality and a more natural timbre compared to the HiBy Crystal6 that has a brighter tonality.

The subbass region of the Crystal6 has slightly more depth and intensity, while the CORSA has the upper hand in terms of decay and control in this area. The Earsonics CORSA offers a better sense of midbass depth and body, while both IEM’s are pretty equal when it comes to the speed and resolution in this area.

The Earsonics CORSA is the IEM with the warmer tonality and richer midrange character, which has shows a slightly more upfront and intimate vocal presentation. The HiBy Crystal6 on the other hand shows a brighter tonality with higher sense of clarity and airiness. The upper midrange of the Crystal6 is sharper and more prone to sibilance/harshness compared to the CORSA, which has a more controlled and forgiving tuning in this area.

The treble range of the HiBy Crystal6 is more highlighted and detailed, however it sounds too bright and sharp in some situation which makes it a less forgiving IEM, when you listen to it with poor recorded tracks. The Earsonics CORSA on the other hand offers a more careful adjusted treble character, which makes it to the more ideal choice for longer listening periods.

The soundstage of the HiBy Crystal6 shows a better sense of depth, while the Earsonics CORSA is more successful when it comes to the wideness of the stage. 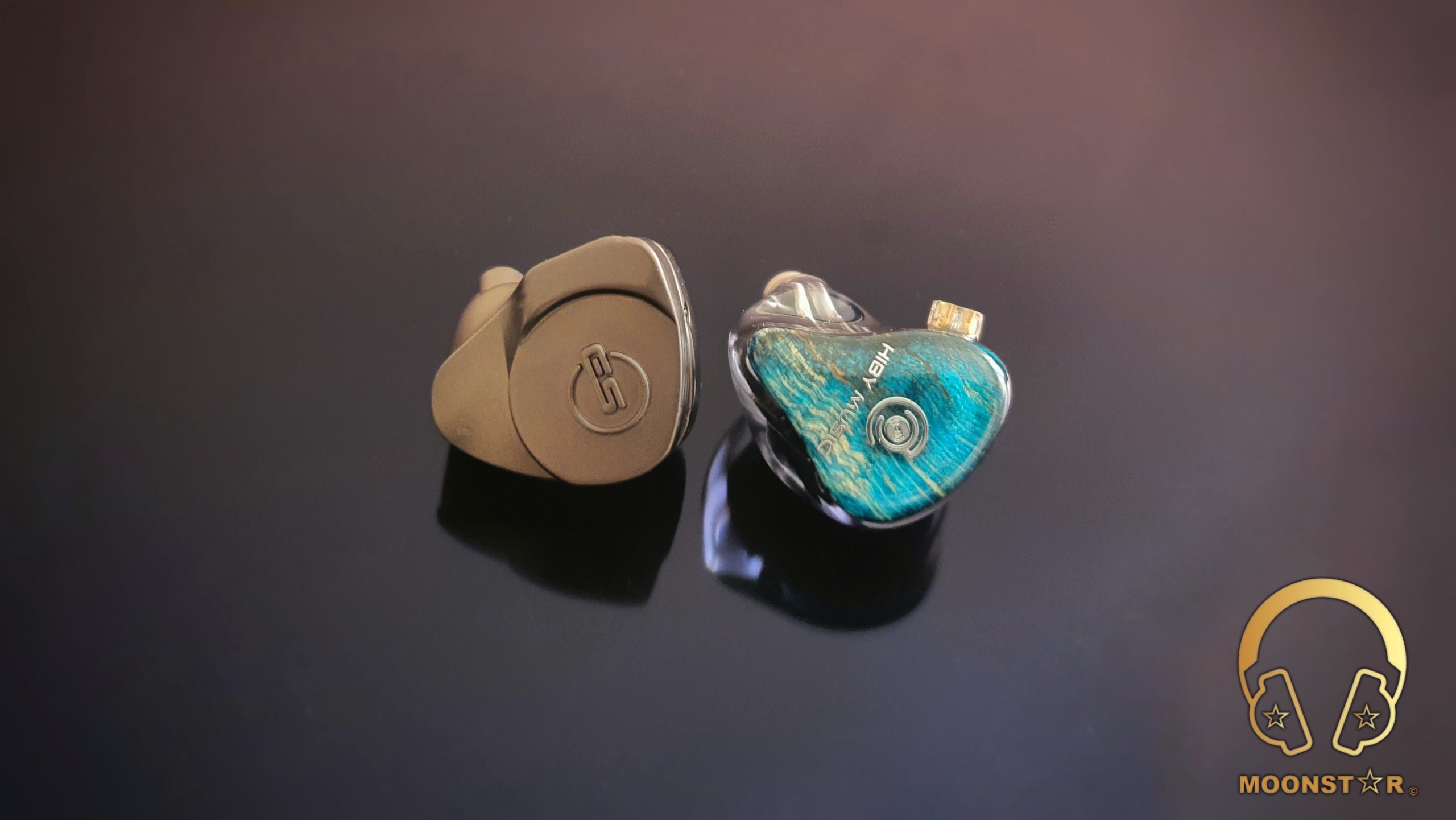 The treble range of both the Dunu DK-3001 Pro and the Earsonics CORSA is pretty energetic & pronounced, without to get out of control. The DK-3001 Pro has the slightly edge when it comes to the treble extension, while both are successful in terms of resolution.

The soundstage of the Earsonics CORSA shows a better sense of wideness, while the depth of the stage is fairly similar. 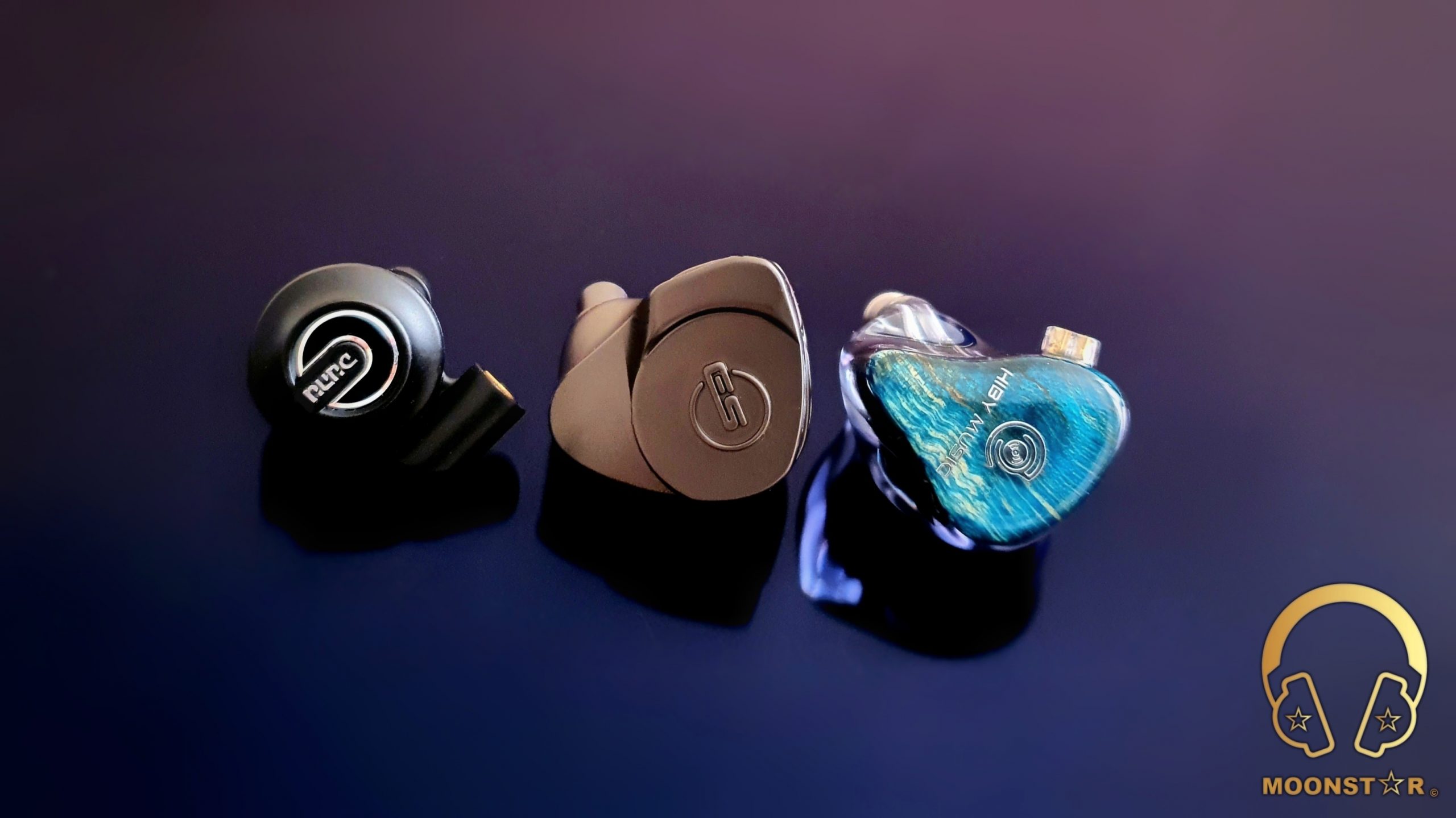 The Earsonics CORSA shows immediately with its impressive looking Metal Housing that you have got a solid piece of audio gear, which has a sound that combines Earsonics warm and rich house-sound with dynamism and clarity. Both the great appearance and the sound performance do fulfill the expectations from a product in this price range that was “Made in France” with Love.