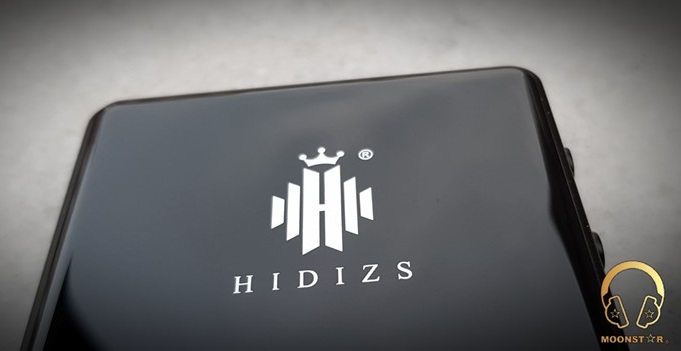 The DAC/AMP with top features for a reasonable price…

Hidizs Technology Co. Ltd. was founded early in 2009 in order to produce some portable HiFi audio devices. Hidizs is now producing Digital Audio Players (DAP) like AP100, AP60/AP60II, AP200 and upcoming AP80 and Digital to Analogue Converters (DAC) like the DH1000 which I will now review for you.

First of all, a big thanks to Hidizs for providing me this sample of the DH1000 for review purposes. I am not affiliated with Hidizs beyond this review and these words reflect my true, unaltered opinions about the product.

The Hidizs DH1000 is a Digital to Analogue Converter (DAC) with a built in amplifier that supports Hi-Res music files with sampling rates up to 32bit – 384kHz and is compatible with multiple operating systems like Windows, Mac, Android or IOS etc.

The device comes in black card-box which contains the following items; 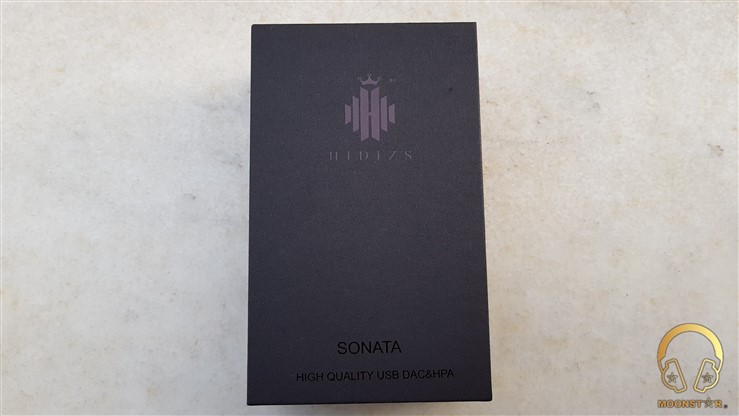 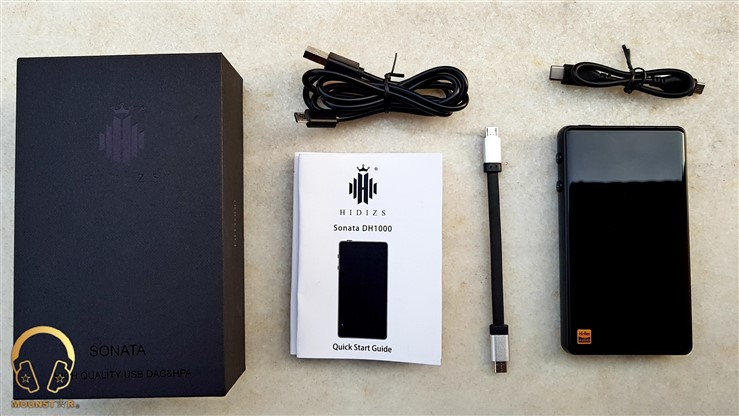 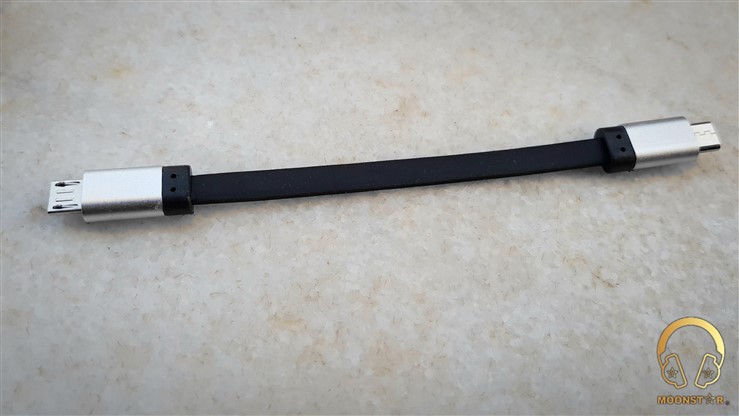 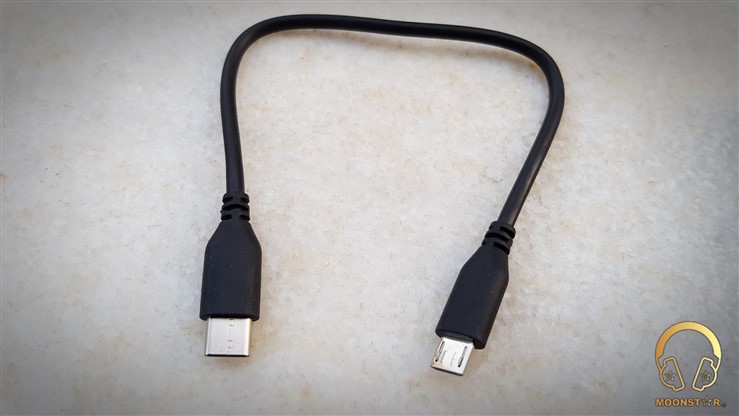 The Hidizs DH1000 is a very well made device with a relative small dimension of 121 x 68 x 13mm, which is smaller than an iphone6/6s. The device comes in black color and will also available in silver and gray colors.

The front and back panel is made of glass, which has a smooth surface that is a real finger print magnet. The frame of the DH1000 is made of metal instead of plastic, which gives an overall nice appearance. 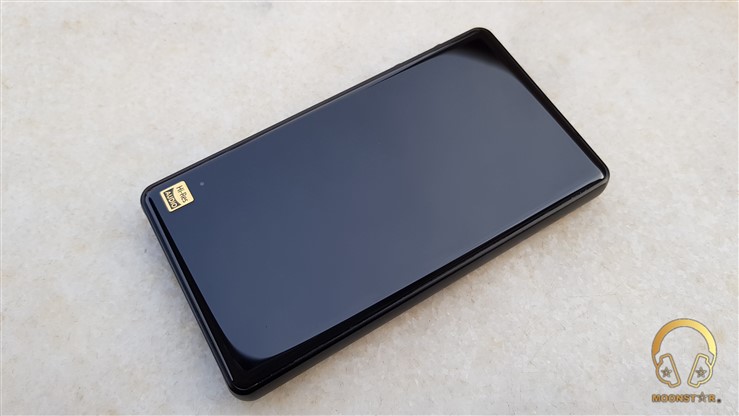 The top side sports the power button, a power green LED indicator which lights up when you press the bottom for 2 – 3 seconds and also the 2.5mm balanced headphone out and the 3.5mm single ended headphone out. 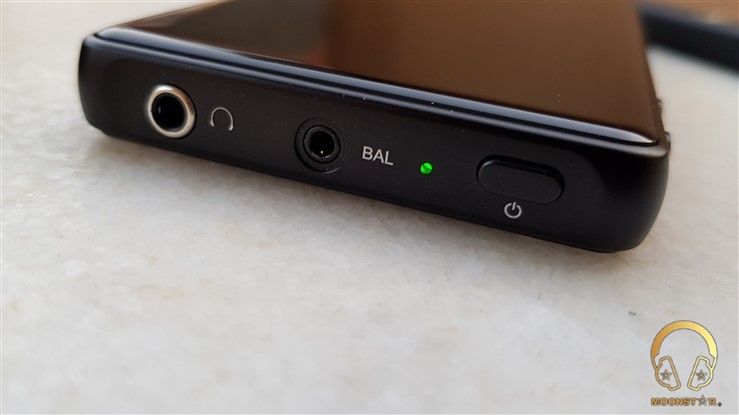 On the bottom is a full sized USB input which can be used for IOS and other devices, a Micro USB for input to feed your music from PC and Android devices and a second Micro USB to charge the DH1000. 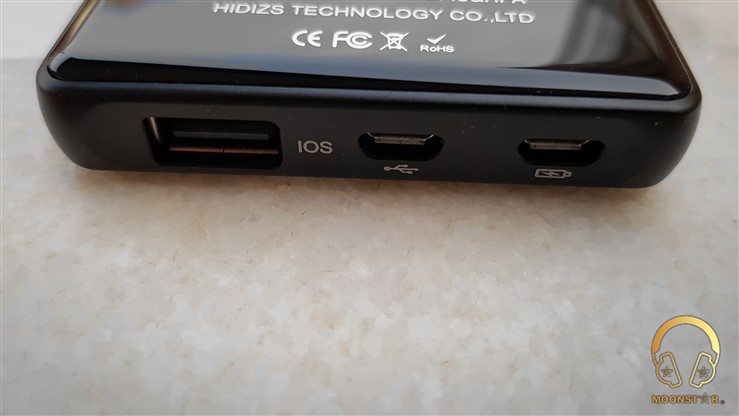 On the right side you can find the volume up and down buttons which have a nice click. 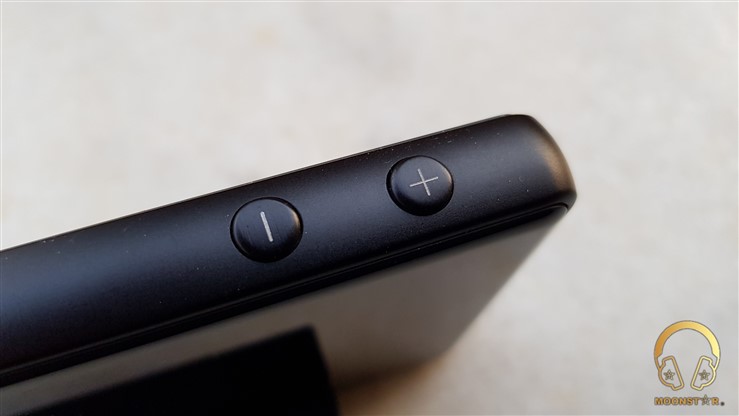 The front panel sports a blue LED indicator which lights up when you charge your device and the Hi-Res Audio certificate sticker. 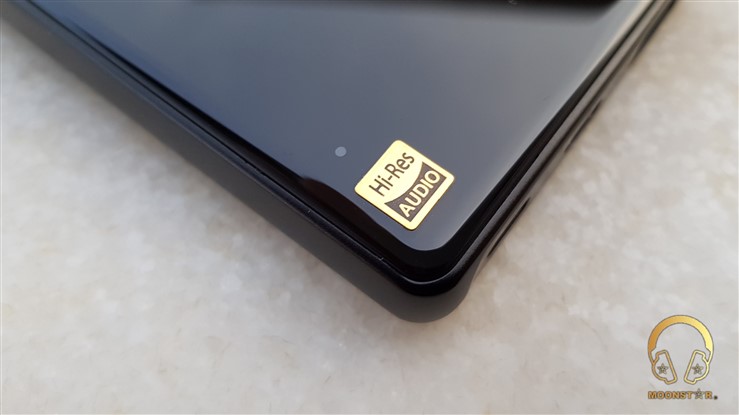 On the back panel, you can find the Hidizs logo, the model number (DH1000) and some certifications. 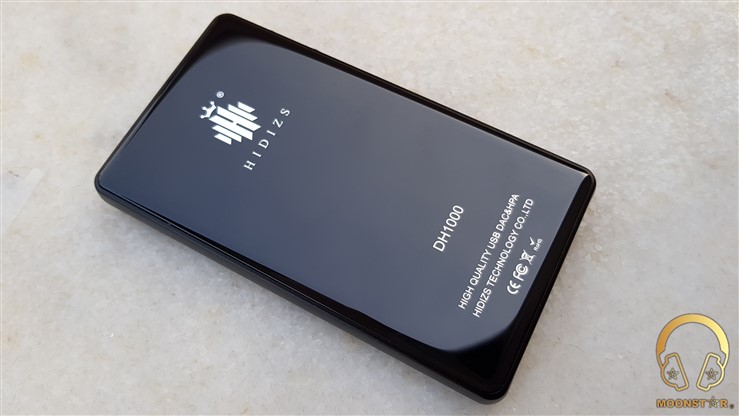 The Hidizs is very well made device and they are no sticky residues or openings on it. But the front and back panel makes me worried because of the glass material which is prone to scratches. 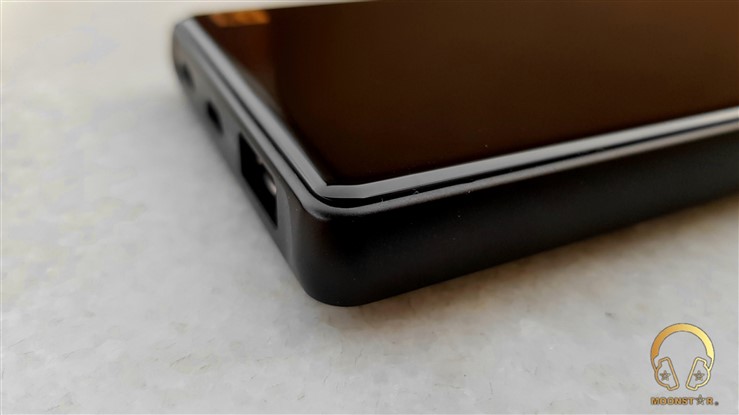 The DAC (Digital to Analog Converter) used inside the Hidizs DH1000 is the Sabre chip of the Company ESS Technology with 32-bit, 2-channel audio D/A converter targeted for audiophile-grade portable applications such as digital music players, Portable DAC/AMP’s etc. The ES9018K2M is using the ESS patented 32-bit HyperStream® DAC architecture and Time Domain Jitter Eliminator. The ES9018K2M delivers a DNR of up to 127dB and THD+N of -120dB. 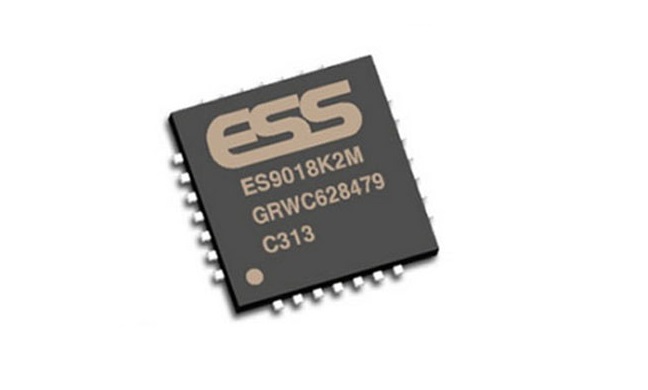 Hidizs DH1000 uses two of this ES9018K2M DACs for each channel to make sure the signals will not interference with each other.

b) AMP Section and Drivability:

The Hidizs DH1000 is using two LPF and OPA modules, which are integrated to the ES9601K headphone amplifier. The ES9601K delivers according to the company ESS a SNR (Signal to Noise Ratio) of 122dB and a THD+N (Total Harmonic Distortion) of 117dB which are quite good values on paper. There also a 20-pin, 3mm x 3mm QFN package inside the ES9601K amplifier, which minimizes some unwanted PCB footprints.

Here are some additional details:

DH1000 has two separate data and charge USB ports. This independent design allows the user to charge the device at home or on the go (portable power bank, while continuing to enjoy DH1000 in action at the same time.

The DH1000 has a build in battery which should be able to last according to Hidizs, for approx. 10 hours of continuous use.

My test results showing that the DH1000 is able to work services like Tidal or Spotify truth the 3.5mm unbalanced headphone out for approx. 8.5 – 9 Hours and 7.5 – 8 hours over the 2.5mm balanced out which has a higher power rating.

The Hidizs DH1000 is a surprisingly silent working device, which has only a very small amount of hissing with some of my sensitive IEM’s like the Dunu Falcon-C.

The Hidizs DH1000 has power to drive headphones from 8 to 600Ω impedance, through both 2.5/3.5mm headphone jacks. It was able to drive my 300ohm rated K’S Samsara Earbud to loud volume, but could struggle to give enough power to more juice demanding full sized headphones, especially above 300 ohms.

Hidizs DH1000 is compatible with almost any of device and dosnet need any addtional driver or software to install. I have test it out with my Android phone, iPad, PC and Cayin N5II which worked flawlessly. 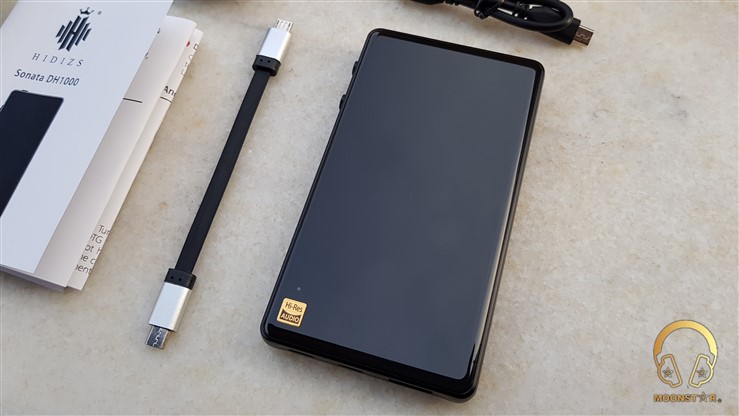 The Hidizs DH1000 review is written after a burn-in of approx 100 hours, over the 3.5mm unbalanced headphone out.

The Hidizs DH1000 is using same ES9018K2M DAC chip, which can be found inside the of the Cayin N5II. But I was quite surprised by the difference in tonality, because the DH1000 has a pretty neutral presentation, with only a hint of warmness and very low coloration, compared to the warmer and more musical tonality of the N5II 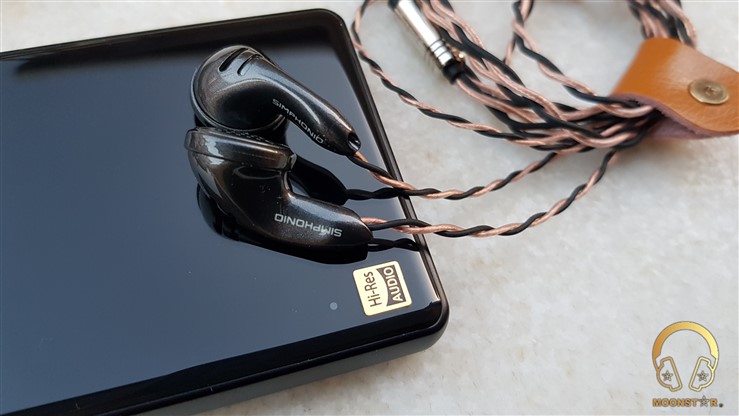 The Bass response of the DH1000 is close to natural and has pretty good control, but is missing a bit of fullness.

The sub-bass area has an adequate amount of rumble with a pretty well texturing and speed, which is quite successful at this price range. The minus of this tuning is the missing of depth in the sub-bass area, which is needed in some genres like Trance music or EDM.

The overall bass character makes the sounds not too warm, but neither cold and is hitting with quite tight and controlled notes.

The mid-bass area sound fairly neutral and has a moderate fullness, which has enough weight to give guitar strings a natural pretention.

The Hidizs DH1000 doesn’t sound dry or cold, but is not the warmest source out there. It has a transparent and smooth midrange, which is fairly neutral with its overall presentation. A remarkable ability of the DH1000 is the layering and separation between instruments and vocals, which is in a high level for this price tag.

Both male and female vocals sounding quite realistic, but the most interesting part is the female voice presentation, which sounds clean and lifelike with some artist like Jehan Barbur or Ozgu Ozman (Minor Empire).

There was a bit stress in the upper midrange for the first 10 – 15 hours, which is partially gone and is now much more controlled and with less stress quantity, after a burn in period of 100 – 120 hours.

The treble range of the Hidizs DH1000 is producing a fairly amount of air between instruments and the treble texture extends vey well for this price range. The lower treble area sounds pretty controlled without any remarkable sibilance, with some female vocals like LP (Laura Pergolizzi), which has a voice on a mezzo soprano level.

The upper treble range of the Hidizs DH1000 has a pretty good level of resolution that is remarkable while paying some instruments like violins, side flutes or cymbals. Another good ability of the DH1000 is the level of brightness, which doesn’t sound in a metallic or unnatural way.

A noticeable minus is the missing of some definition and micro detail in the upper treble range that is quite acceptable for this price range.

The soundstage of the Hidizs DH1000 is quite expansive in both directions, especially with its wideness and performs very well in Casey Abrams binaural recording “Robot Lover” and Yoshi Horikawa’s interesting song “Bubbles”. The Positioning of instruments and vocals is quite precise and with pretty good separation. 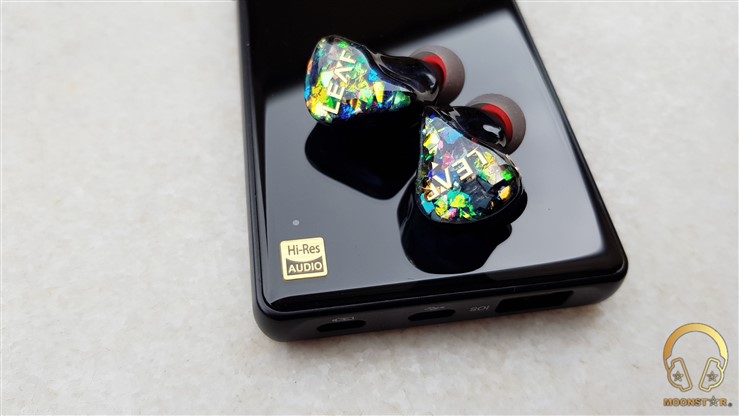 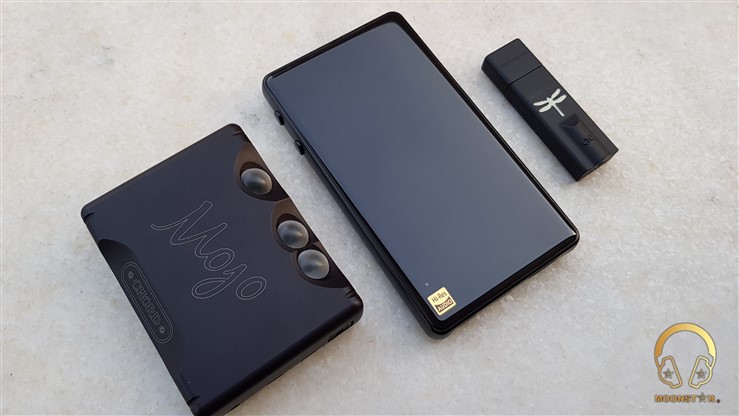 The Chord Mojo is one of my favorite portable DAC/Amp’s with its musical and powerful presentation.

The main difference starts in the lower frequency area, where the Chord Mojo sounds fuller and dynamic. The sub-bass of the Mojo is reaching to a lower register and has more rumble. The Hidizs DH1000 on the other hand, sounds more natural and has additional control in this area.

The bass of the Mojo has more impact, while the DH1000 sounds slightly more controlled. The texture of the bass punches is nearly identical and the difference is not on a remarkable level. The Chord Mojo has also more mid-bass fullness with a slightly warmer approach, while the Hidizs DH1000 has additional control over this area.

The Hidizs DH1000 sounds more natural and airy in the midrange area compared to the Chord Mojo, which is a result of its bass tuning. The success of transparency goes to the DH1000, while the Mojo wins in musicality and emotion. The Chord Mojo represents male and female vocals in a more intimate and emotional way, while the Hidizs DH1000 is missing some warmth, but wins with its neutrality and clearness.

The Hidizs DH1000 has more space for instruments, while the Chord Mojo shares more micro details.

The Hidizs DH1000 has slightly more treble emphasis and extends better then those of the Chord Mojo, which has otherwise a sweeter presentation. The Cord Mojo on the other hand, has slightly more resolution and better control in the treble area, but both devices have nearly the same performance for separation of instruments and don’t sound unnatural or metallic.

In terms of soundstage performance, the DH1000 and the Mojo are similar for wideness, while the DH1000 has slightly better depth. The Chord Mojo has the upper hand for separation and imaging of for instruments. 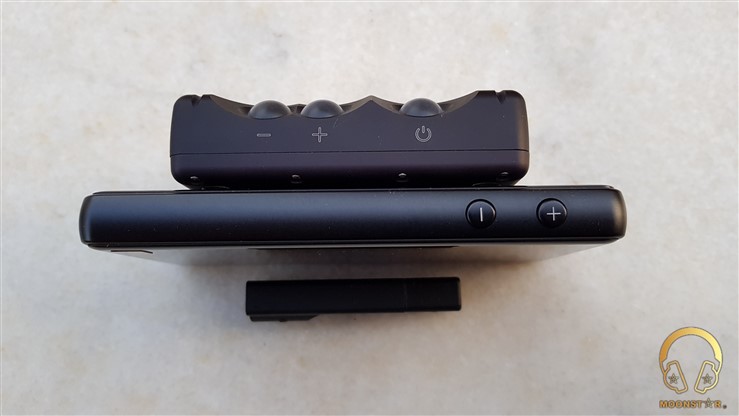 The Audioquest Dragonfly Black is also one of my favorite sources, especially due its small form factor.

The Dragonfly Black has a warmer tonality then those of the DH1000 due more weight in the lower frequency range.

The Dragonfly black has relative more bass emphasis and impact with an energetic presentation. The sub-bass has more rumble and goes also deeper, but sounds a bit loose compared to the DH1000’s sub-bass presentation, which has better control in this regarding.

The bass of the Hidizs DH1000 is faster and extends in a more natural way. Those who like a stronger bass impact will love the Dragonfly Black, while the DH1000 sounds more natural and with better texture in this area, which is more ideal for critical listening.

The midrange of the DH1000 sounds transparent and more natural, compared to the warmer and more musical presentation of the Dragonfly Black. The DH1000 has also the cleaner background, which helps to add better definition for instruments. Both male and female vocals are sounding more realistic with the DH1000, which has also the better separation between instruments.

The upper midrange area of the Dragonfly Black is more energetic and forward, but this makes it prone to sibilance. The Hidizs DH1000 has here the upper hand with its less emphasized upper midrange.

The Hidizs DH1000 has a slightly brighter treble presentation with additional resolution, while the Dragonfly Black sound less upfront, but has otherwise a good detail retrieval for its price tag. The treble control on both devices is pretty good, but Hidizs DH1000 has the more superior upper treble extension.

In terms of soundstage, the Hidizs DH1000 expands better in both directions and has also the better instrument separation and placement. 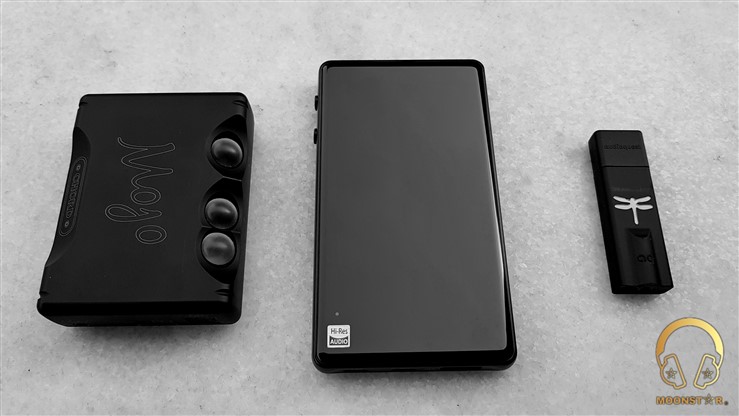 The Hidizs DH1000 is a very well build device with an eye catching design, which has a fairly detailed and transparent sound. All these features are packed in a relative small device that is sold for a reasonable price. This makes Hidizs DH1000 to a very good choice in a price range between 200 – 400 USD.