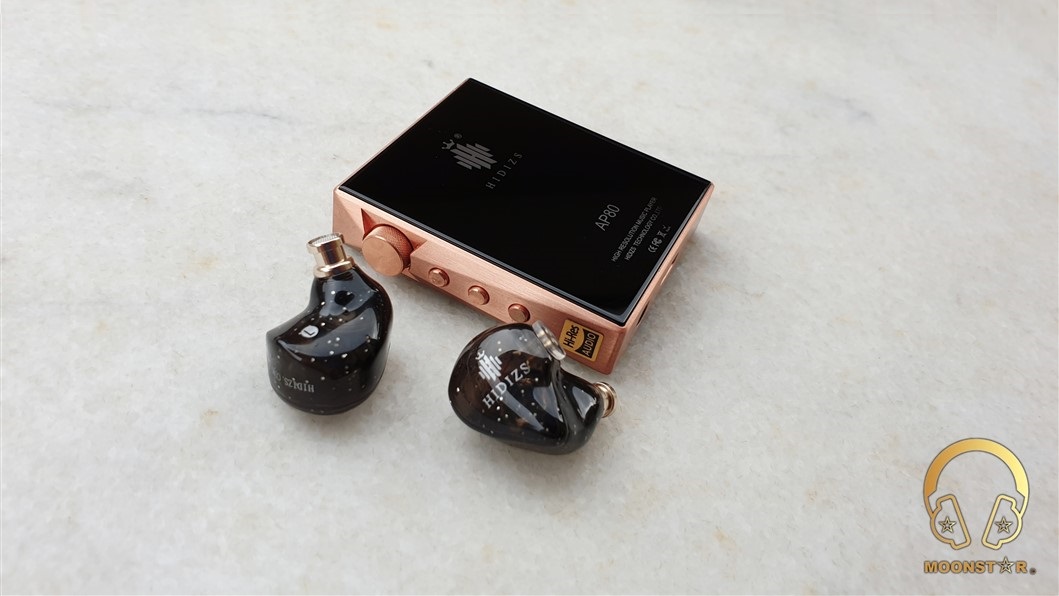 Hidizs Technology Co. Ltd. was founded in 2009 and offers a wide variety of portable audiophile equipments such like Digital Audio Players (DAP), Digital to Analogue Converters (DAC), DAC/AMP Dongles and In-Ear Monitors. The MS1 Rainbow that I will now review for you is a member of the MS Series In-Ear Monitors and the updated version of the original MS1.

The Hidizs MS1 Rainbow is an In-Ear Monitor which has a skin friendly Resin Shell that features a 10.2mm diameter polymer bio-diaphragm dynamic driver. It comes with detachable cable that is made of 4-core high purity OFC wire and features 2-Pin connectors and a microphone with in-line control function. 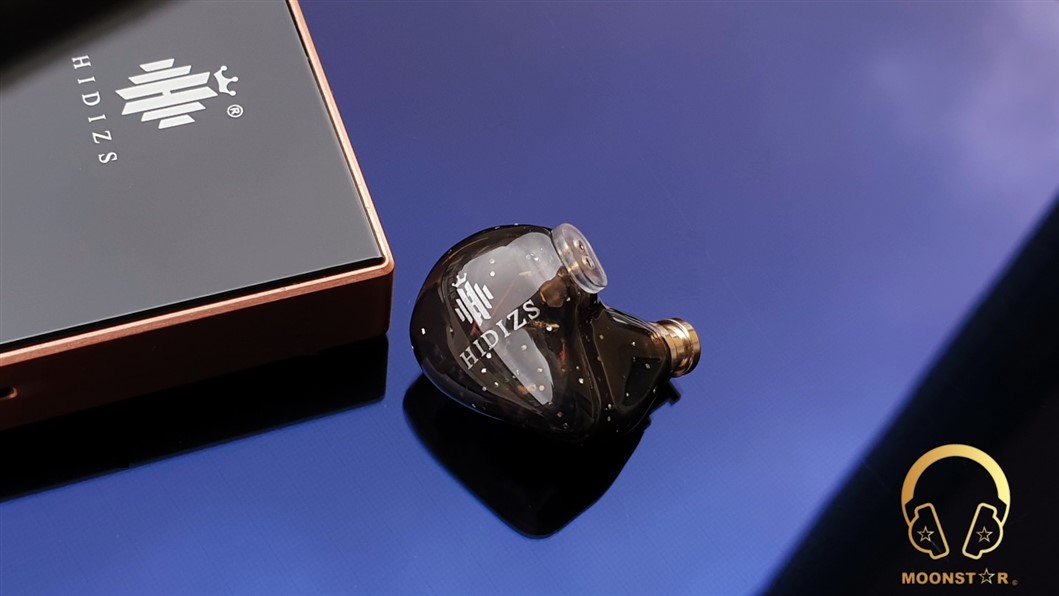 I would like to thank Hidizs for providing me the MS1 Rainbow IEM as review sample. I am not affiliated with Hidizs beyond this review and these words reflect my true, unaltered, opinions about the product.

The Hidizs MS1 Rainbow is available in 7 different color options and can be purchased under the link below;

The Hidizs MS1 Rainbow came in a rectangular white cardboard box that sports the Hidizs Logo, the product illustration and some brandings on the top cover, while the rear cover shows information’s about the product features. 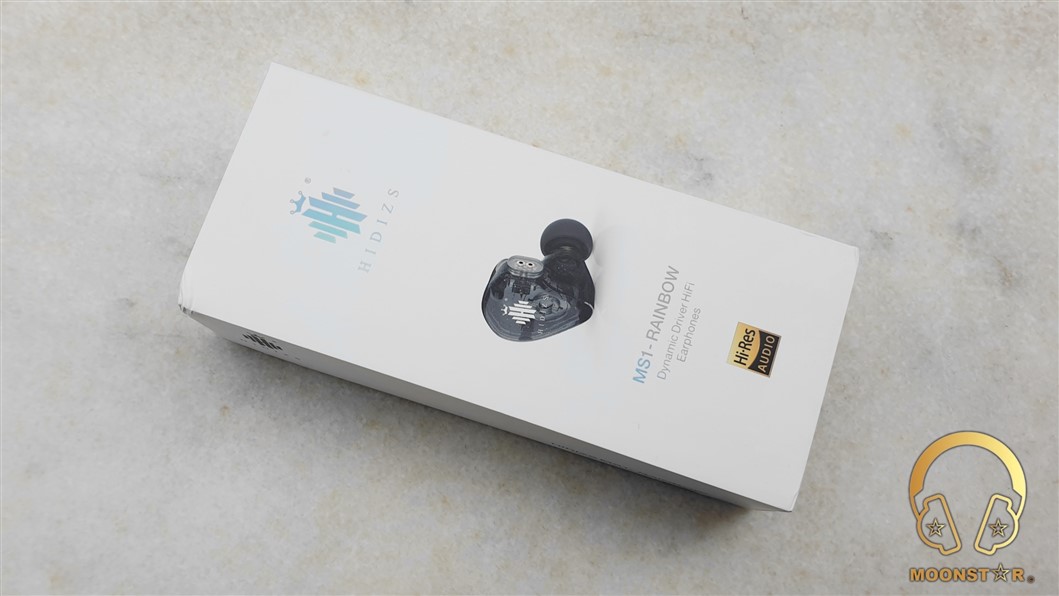 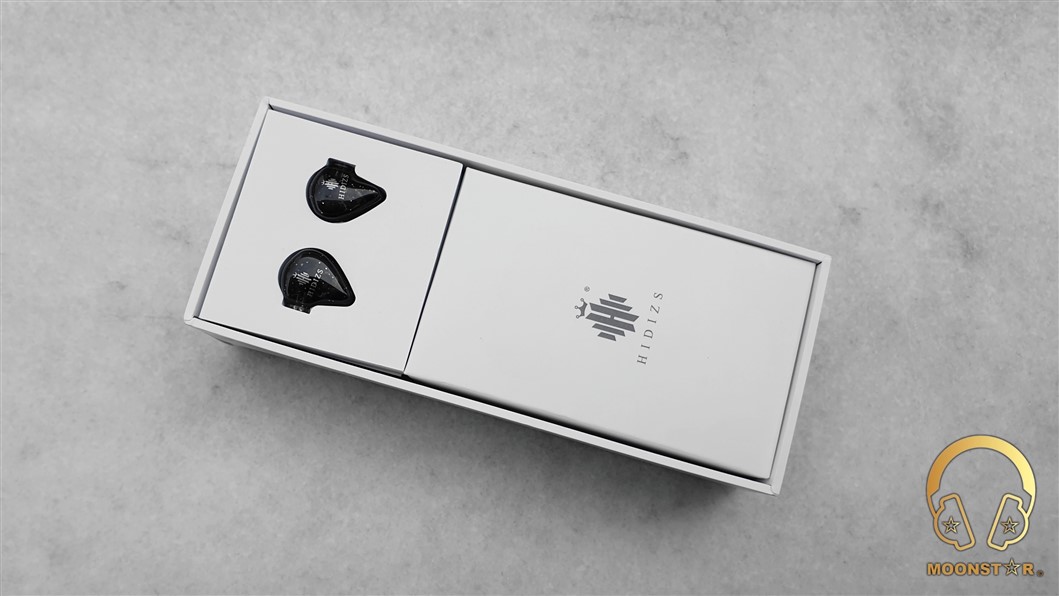 The box of the Hidizs MS1 Rainbow has the following contents; 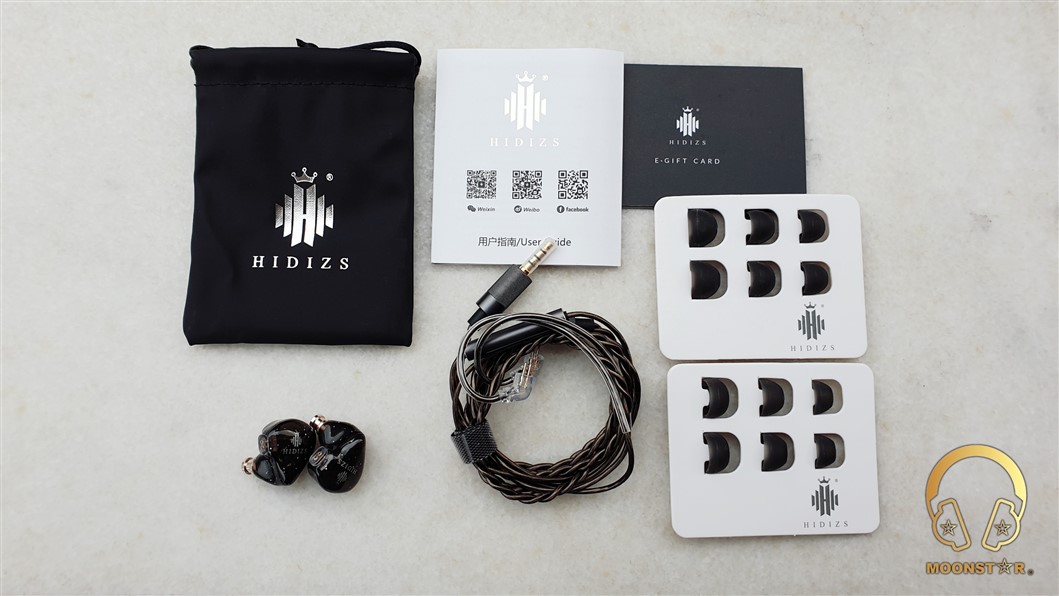 The Hidizs MS1 Rainbow IEM has a skin friendly monitor shell that is made of resin from the German company Markrolon. The MS1 Rainbow is available in 7 different color options which are Black, Blue, Pink, Yellow, Purple, Red and Red transparent.

The definition Rainbow is for the variation of color options and the small glitters particles that are visible on the surface of the MS1. 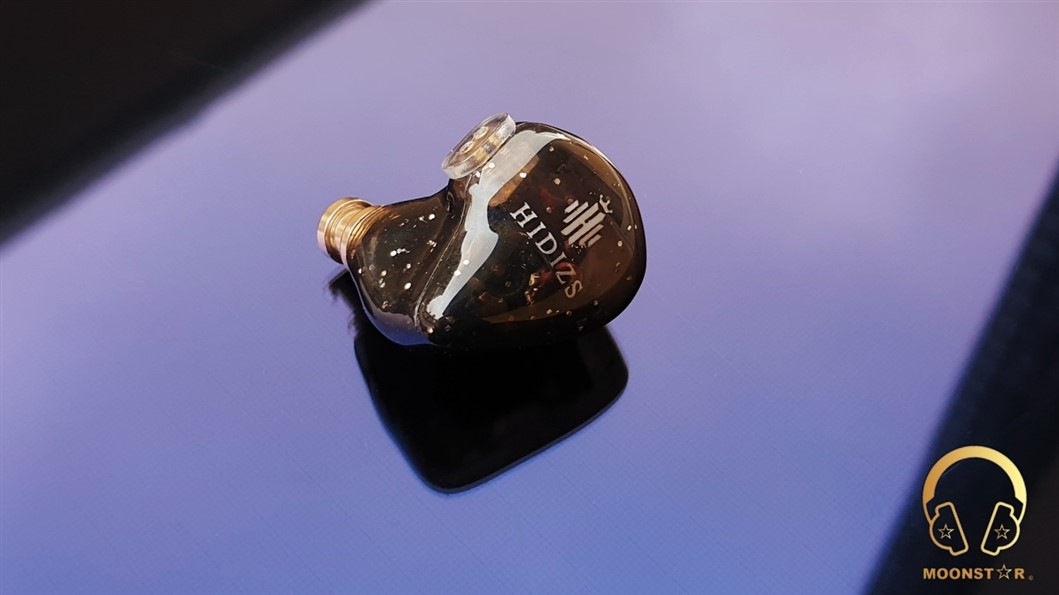 On the top of the monitor “the faceplate” is the Hidizs brand logo which is printed to the outer surface. 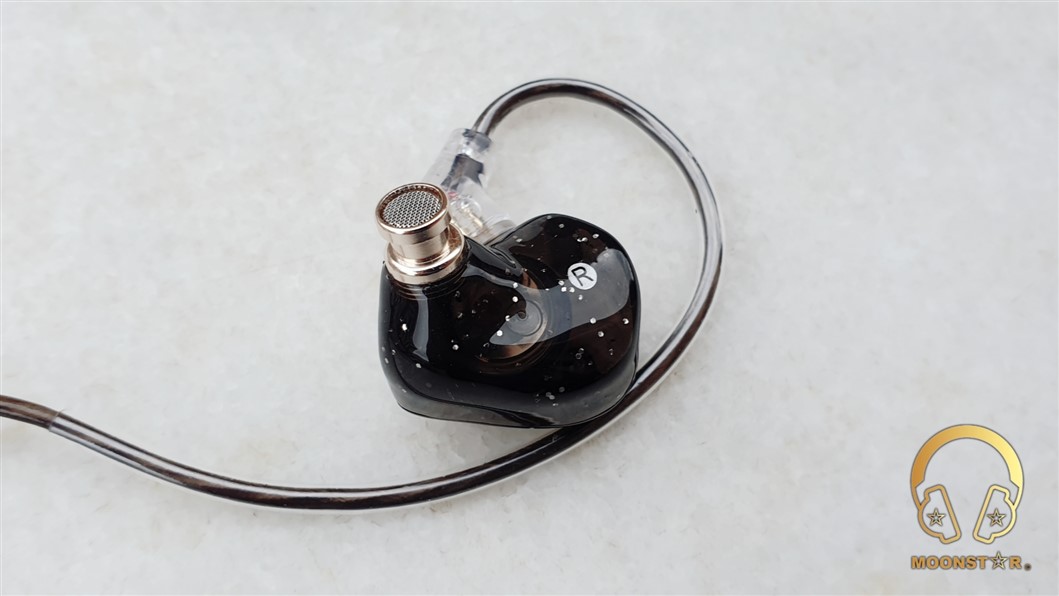 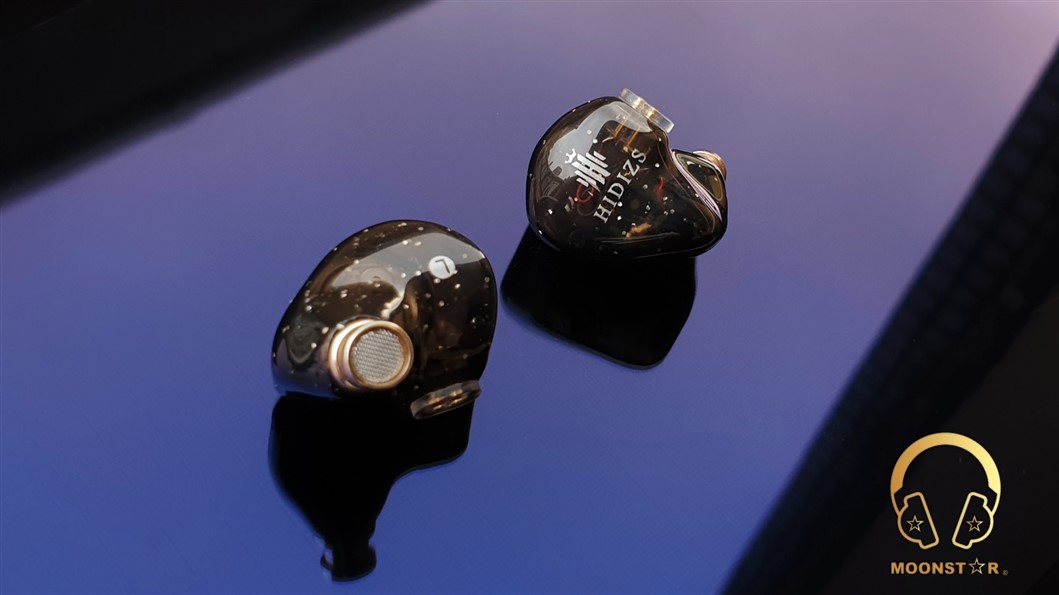 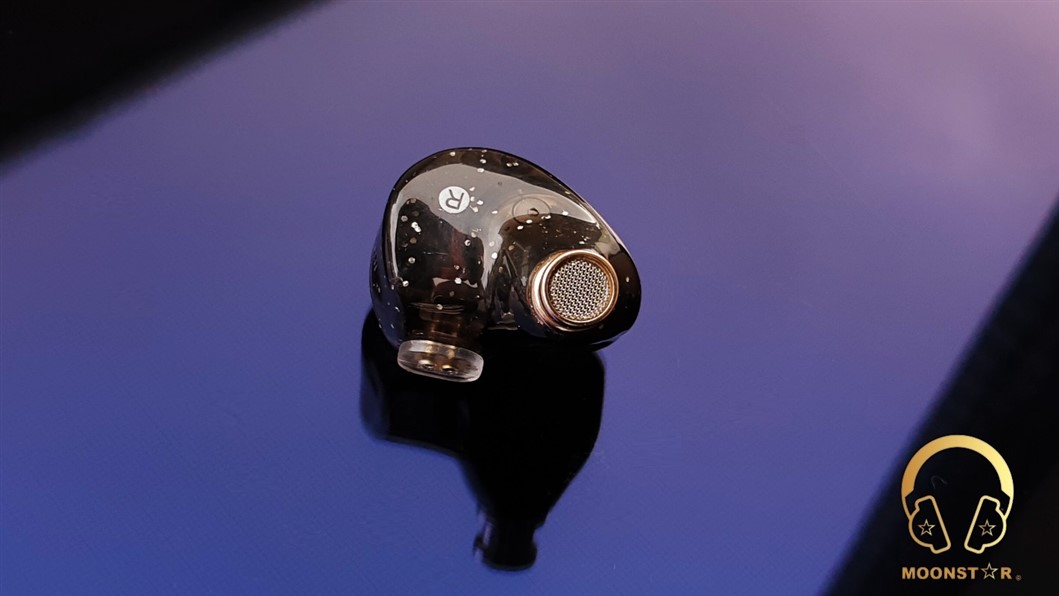 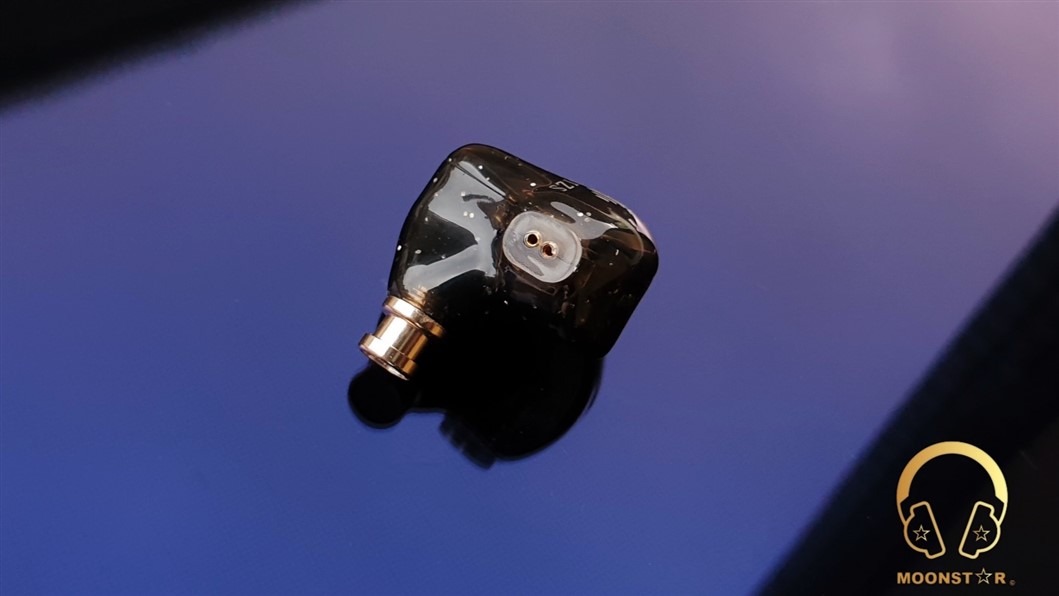 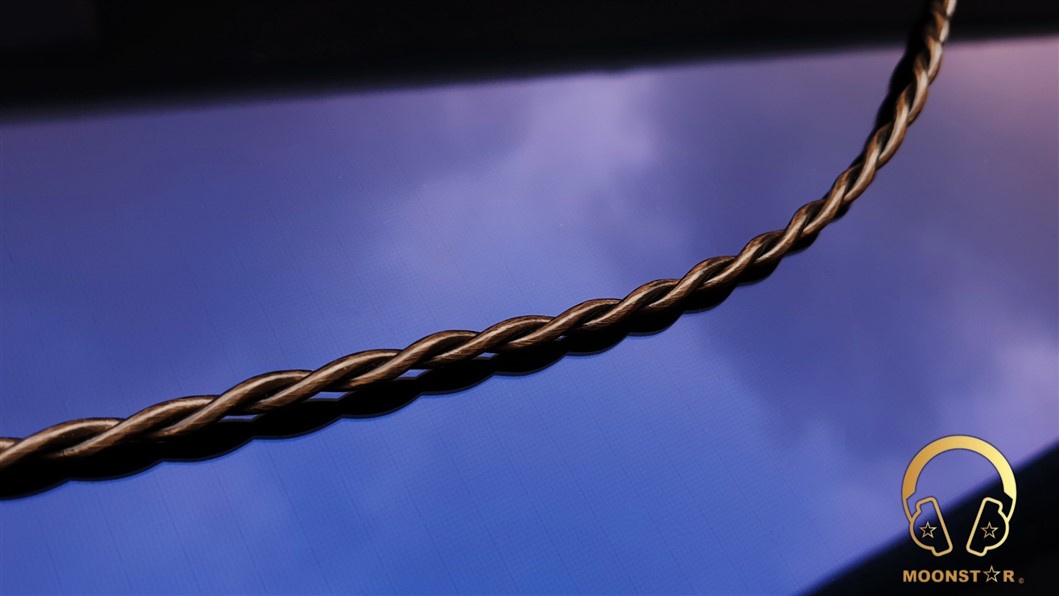 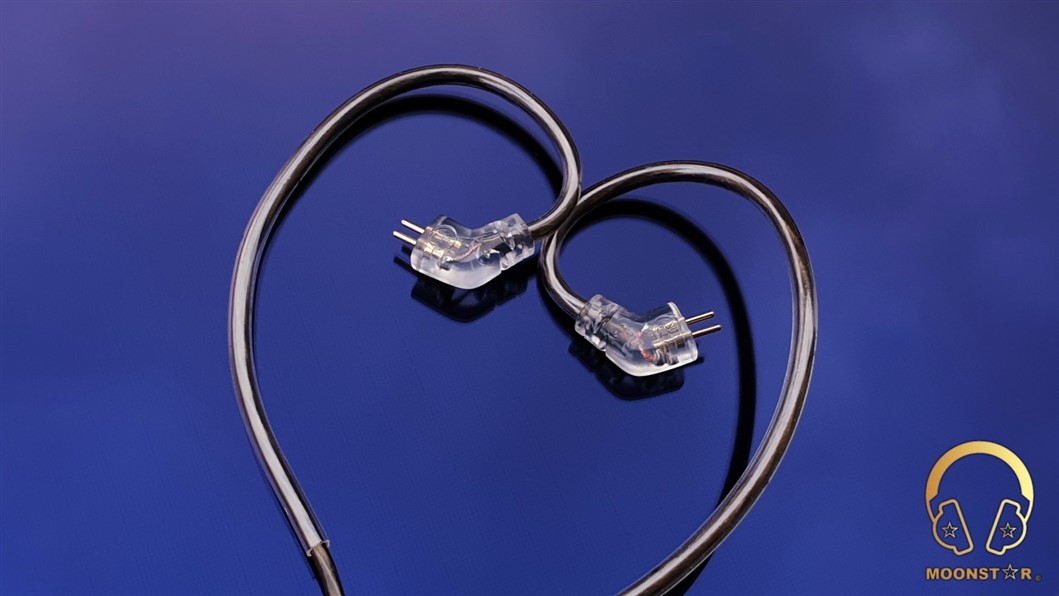 The connector housing is made of transparent plastic and each side has a left & right indicators. The indicators are not very visible which is my only complain about the cable. 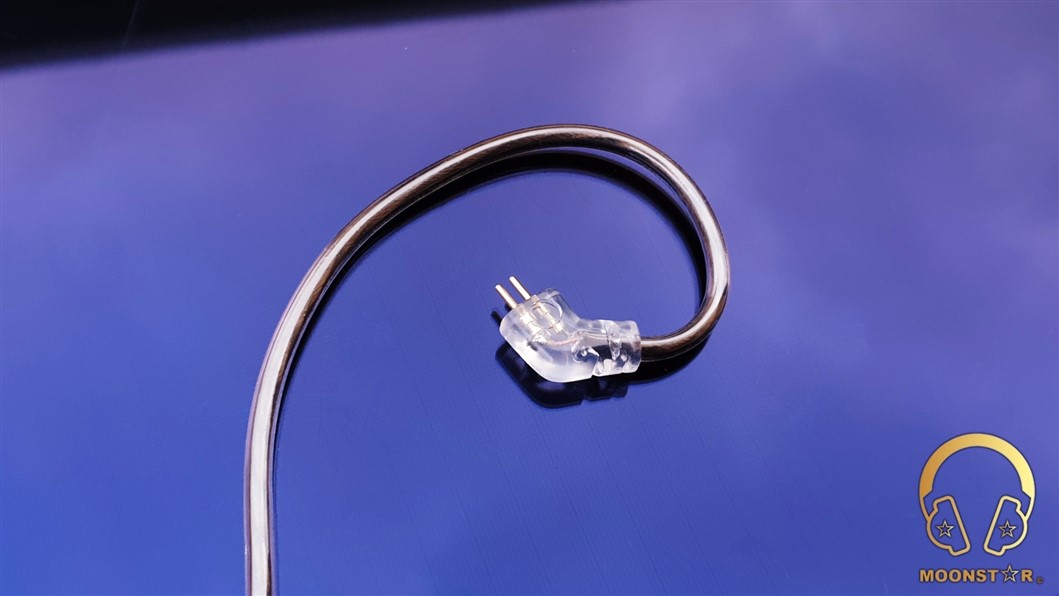 Near the connectors is a transparent ear guide that will offer higher comfort on the go. 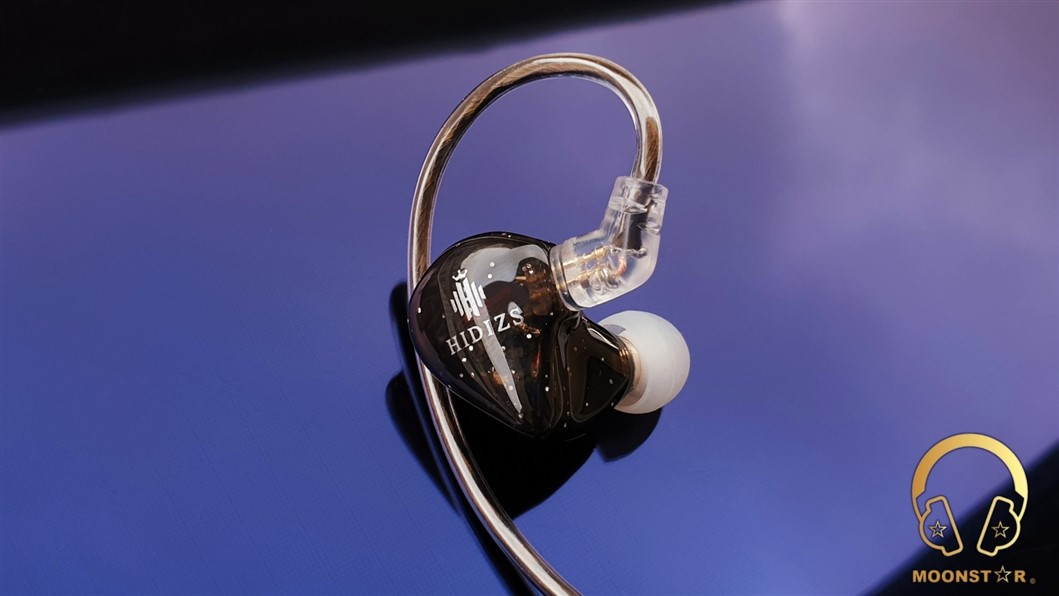 The Y-splitter is made of metal and has a gunmetal color with a textured surface. The y-splitter has also a plastic strain relief in black color for additional protection. 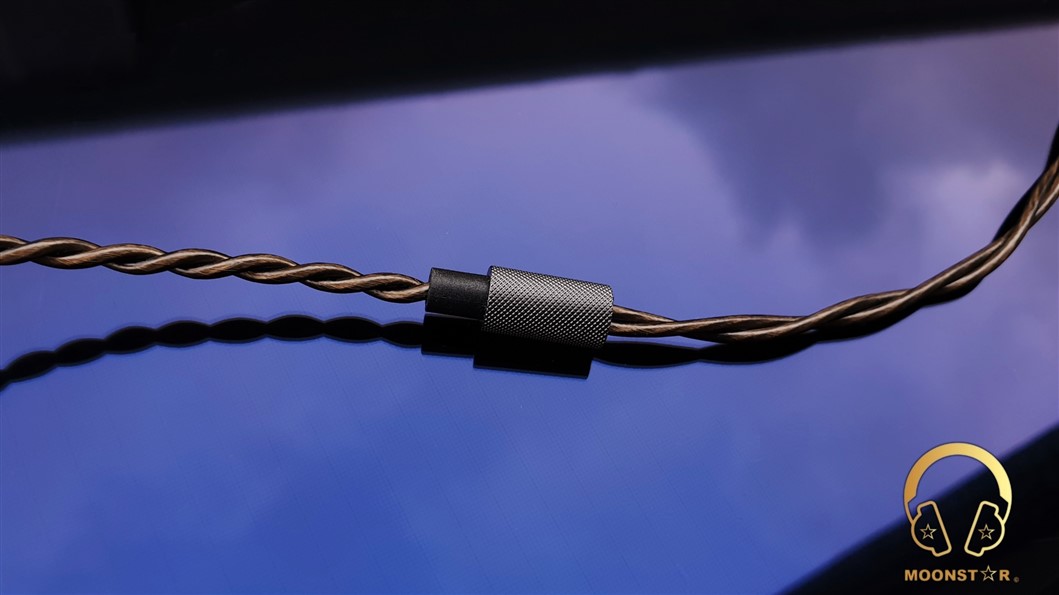 The 3.5mm TRS headphone jack has a strait profiled metal housing which has the same color and texture like the y-splitter. This headphone housing sports also a Hidizs branding and a plastic strain relief for extra protection. 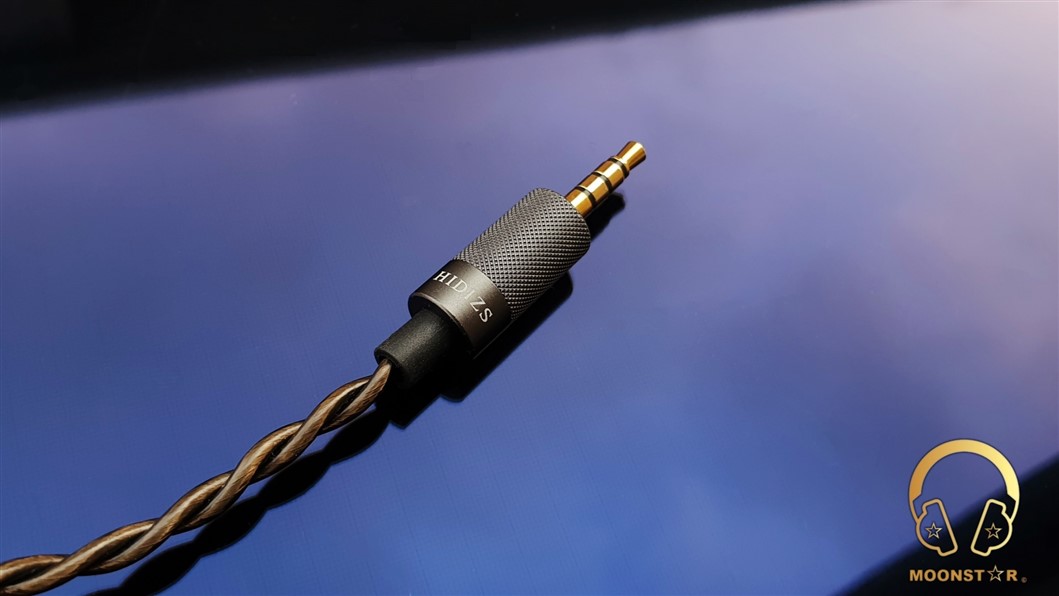 The right side of the cable features a microphone with in-line control that has multifunctional buttons for actions like play/pause, volume up/down, etc. The buttons are made of black plastic while the main body is of metal in gunmetal color. 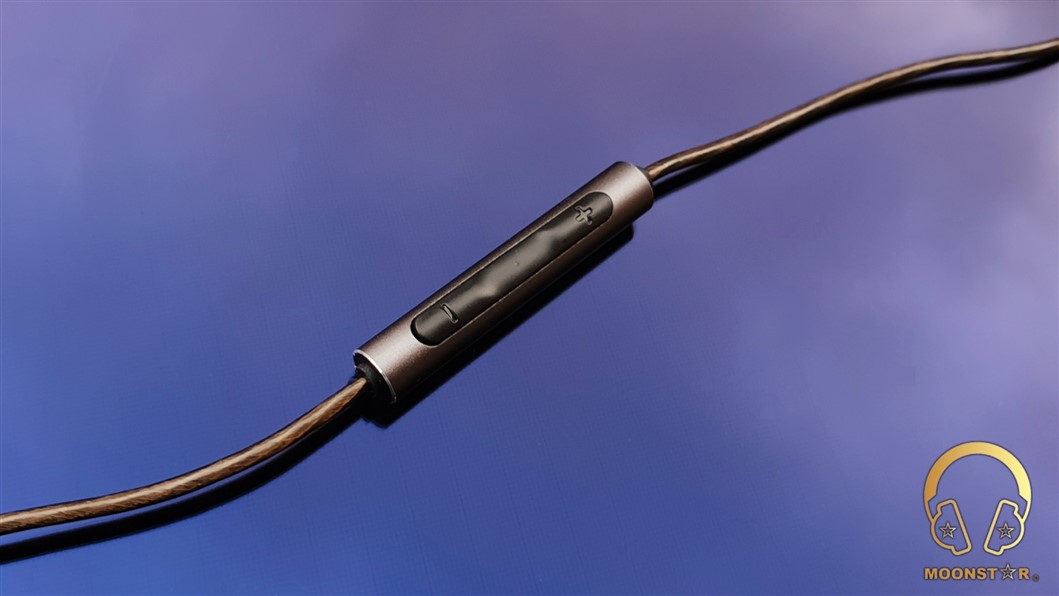 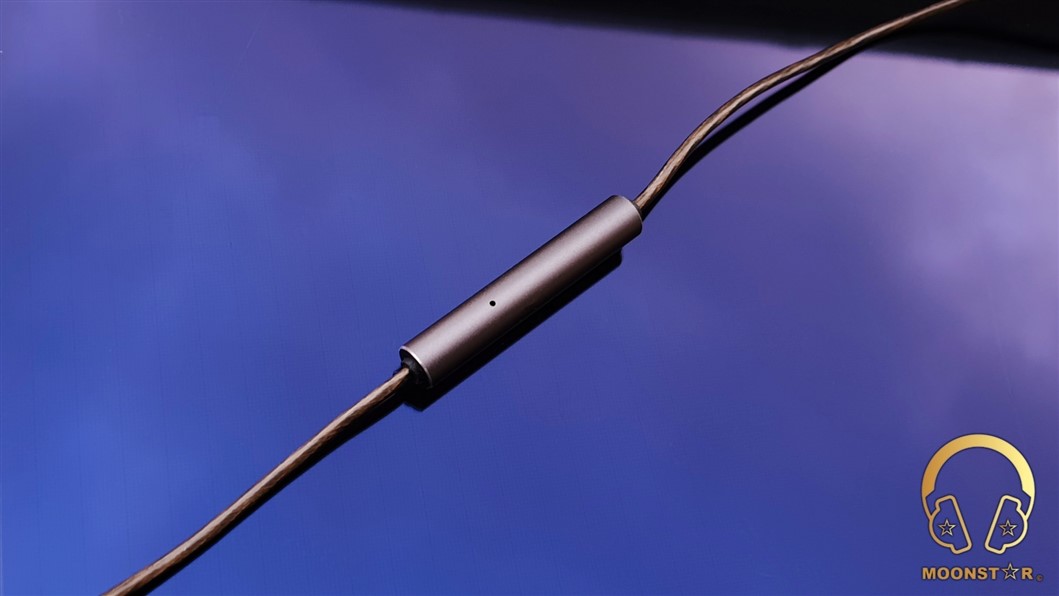 The overall appearance of the cable is very good and gives you a solid feel. 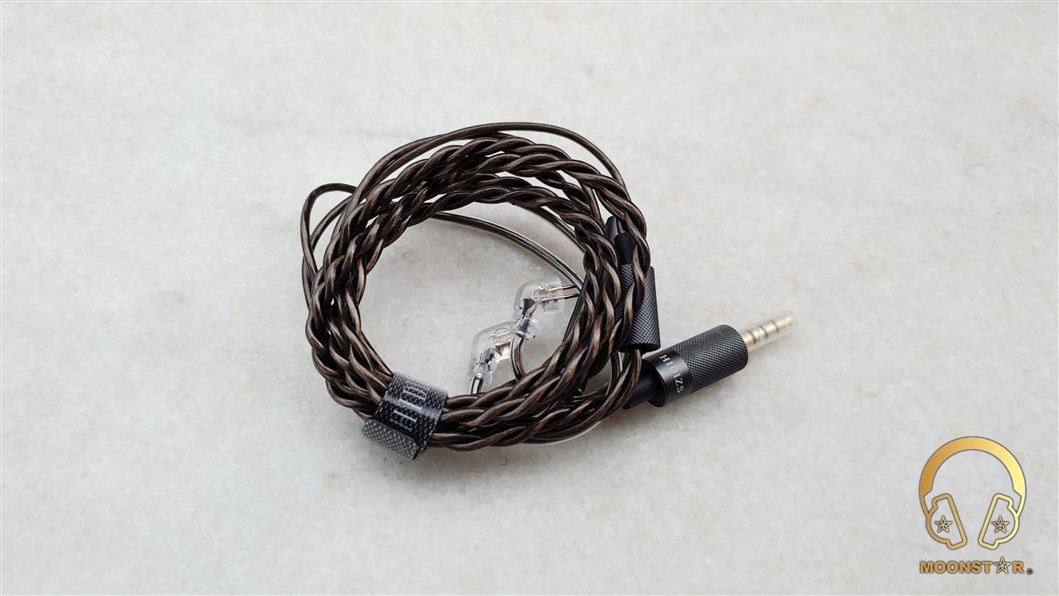 The monitor shape of the Hidizs MS1 Rainbow is pretty comfortable and didn’t hurt my ear concha even after longer listening (2-3 hours) periods. The isolation on the other hand is on an average level which is sufficient for moderate noisy environments like the bus, metro or train.

The Hidizs MS1 Rainbow is a source friendly IEM thanks to its pretty low impedance of 20Ω and sensitivity around 112dB which makes it very compatible with relative weak sources like a Smartphone or Tablet. The Hidizs MS1 Rainbow pairs pretty well with almost any source I have test with it and shows also a great synergy with the AP80 Copper. 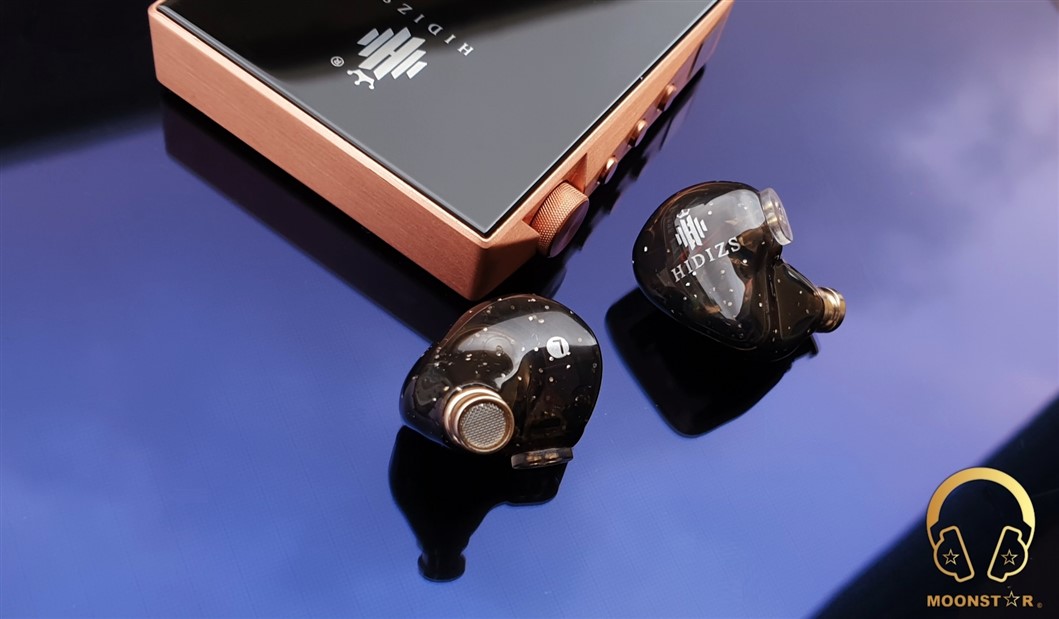 The Hidizs MS1 Rainbow has a tad warmer than neutral tonality which avoids a too clinical/dry presentation. The MS1 rainbow shows a bass that is pretty fast and balanced, while the midrange is transparent/clear and the treble range has a good level of extension.

Please not that this sound analysis is written after a burn-in process of approx 100 hours. The MS1 Rainbow was paired with the Hidizs AP80 Copper which shows the best synergy and with some other sources like the FiiO M5, Samsung Galaxy S9 & iPad Air2.

The MS1 Rainbow shows a subbass presentation that reachs fairly deep and shows an average intensity and extension. It is not very highlighted but the depth is on a sufficient level. The subbass tonality is slightly warmer than neutral and pretty controlled in its presentation.

The midbass region of the Hidizs MS1 Rainbow is slightly less pronounced than the subbass region. It shows a good level of impact that should be sufficient in terms of intensity and quantity. The midbass of the MS1 Rainbow will satisfy most listeners with exception of bass-heads.

The general bass presentation of the Hidizs MS1 Rainbow can be described as controlled, fast and pretty linear/balanced. The 10.2mm dynamic driver is pretty fast in terms of bass response, which is a big plus point for an IEM with a dynamic driver at this price range.

The midrange of the Hidizs MS1 rainbow is slightly recessed due to the V shaped sound signature. It is fairly transparent and clear, while I would wish a tad more lower midrange depth and fullness. The MS1 Rainbow has a perfect synergy with the AP80 Copper DAP that does add some extra fullness/body and depth do the midrange.

The Hidizs MS1 Rainbow is successful with both, male and female voices that do sound in general pretty detailed and transparent. Female vocals have an advantage over male voices due to the upper midrange character of the MS1 Rainbow, which is more highlighted compared to the lower midrange that is missing a tad of extra depth and body.

When it comes to the instrument performance of the MS1 Rainbow, I can say that violins and pianos are more emotional, natural and detailed compared to instruments like acoustic guitars or violas that do sound otherwise fairly pleasant.

The upper midrange region was a bit harsh at the beginning and needs some burn-in to normalize. The upper midrange tuning of the Hidizs MS1 Rainbow adds the general presentation a fairly transparent and airy feel, without to be overly harsh or ear piercing after a burn-in process of around 100 hours. 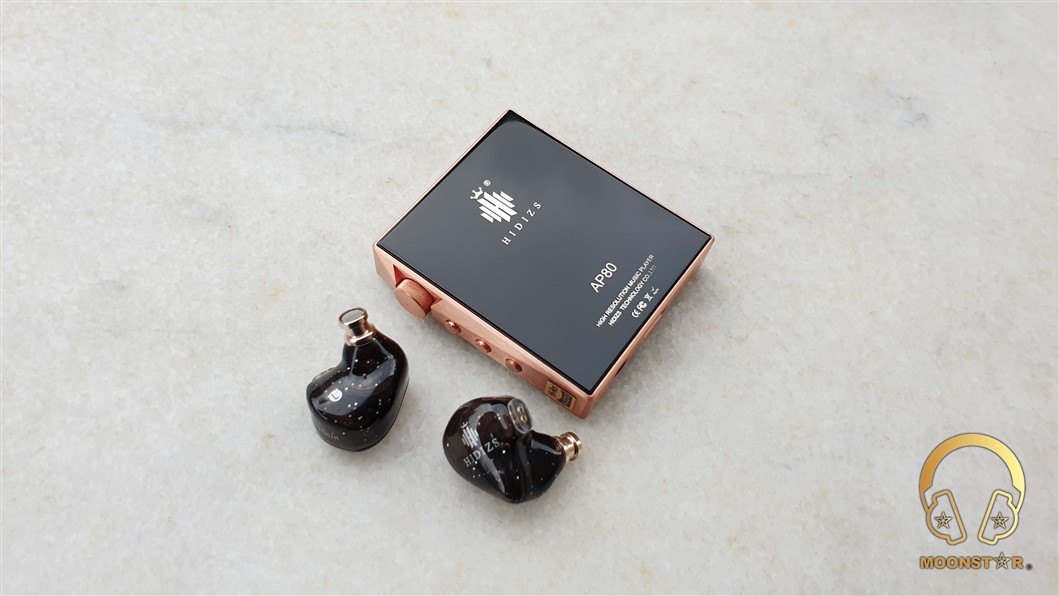 The treble range of the Hidisz MS1 Rainbow sounds pretty successful in terms of extension. It is also fairly detailed and gives the overall presentation a nice amount of clarity and airiness, especially while listening to genres like jazz and classical music. The treble range needs same as the upper range some burn-in to smooth out and to sound more controlled.

When it comes to the soundstage of the Hidzs MS1 Rainbow, I can say that it shows a sufficient performance for an In-Ear Monitor at this price level in terms of separation, layering and placement of instruments and vocals. The soundstage width of the MS1 Rainbow is on an average level, while the depth is just ok.

Both the Shozy Form1.1 and the Hidizs MS1 Rainbow are IEM’s with a V shaped sound signature, while the MS1 has a more forward midrange presentation.

The midbass of the Shozy Form1.1 has more quantity and intensity compared to the Hidizs MS1 Rainbow which shows a more linear response in this frequency region and has the upper hand in terms of speed, tightness and control especially in complex passages. 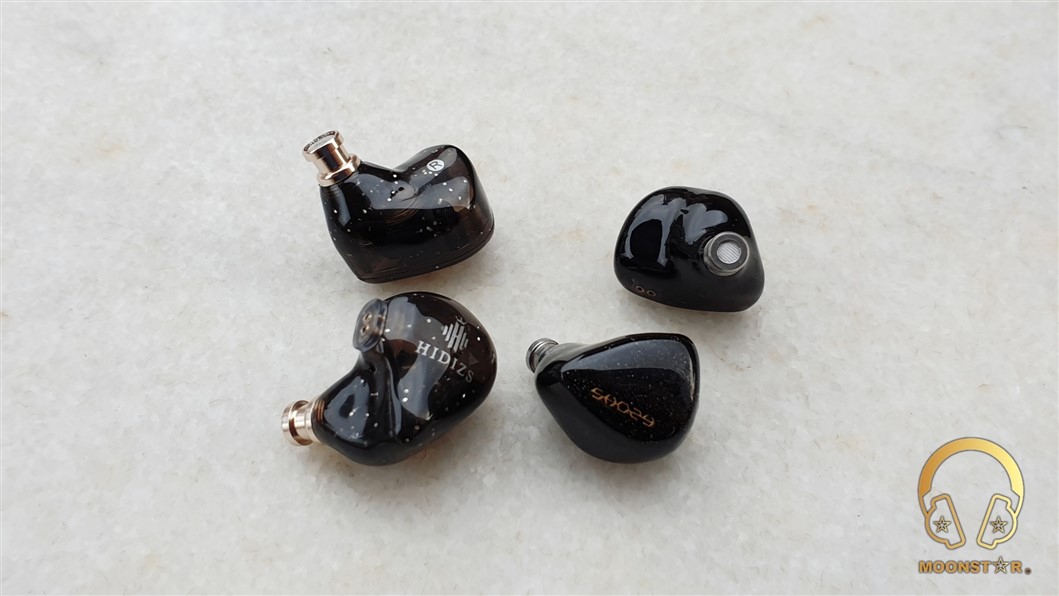 The upper midrange of the Hidizs MS1 Rainbow is more pronounced shows also a better level of extension. The Form1.1 is slightly more controlled, but the MS1 Rainbow has the upper hand in terms of detail retrieval.

The soundstage of the Hidizs MS1 Rainbow is slightly wider and more airy than those of the Shozy Form1.1. The Form1.1 has the upper hand in terms of soundstage depth.

Hidizs MS1 Raibow versus Brainwavz B200:

The subbass of the Hidizs MS1 Rainbow is superior in terms of quantity, depth and extension. It shows more rumble and reaches to a lower register than those of the Brainwavz B200 which has the upper hand in terms of control.

The midrange of both IEM’s are airy and pretty transparent, while the Hidizs MS1 Rainbow has a warmer tonality and fuller presentation with greater lower midrange intensity and depth. The Brainwavz B200 has a slightly edge in terms of transparency and micro detail retrieval. Male vocals do sound more successful with the MS1 Rainbow due to lower midrange depth and fullness, while both IEM’s are pretty close/equal in terms of female vocal performance. 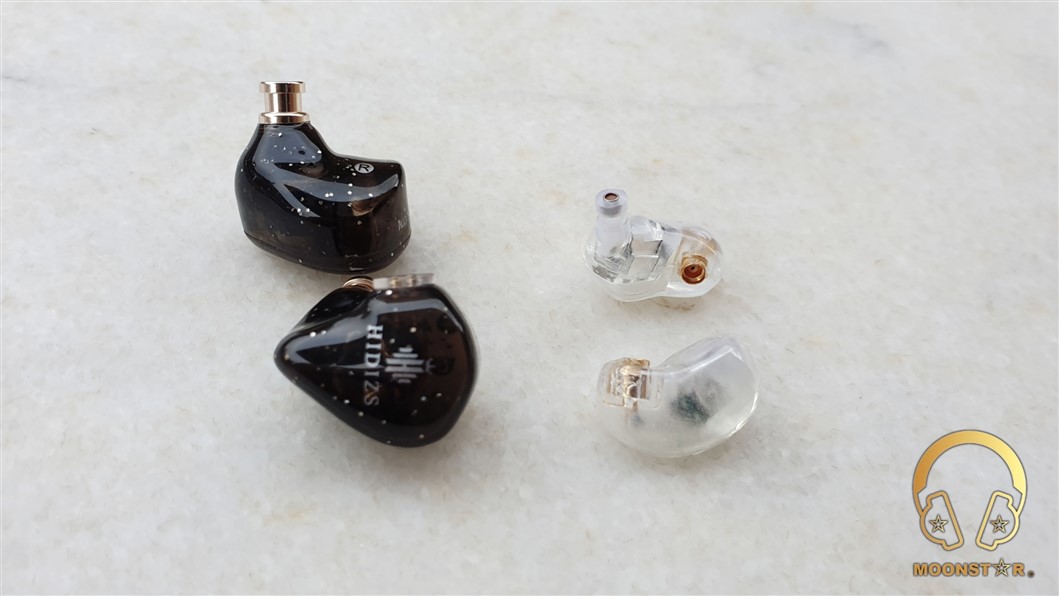 The upper midrange of the B200 is slightly more detailed and shows a thinner and closer to analytical tonality compared to the MS1 Rainbow, which sounds warmer and thicker/fuller.

Instruments like guitars and violas do sound more successful with the MS1 Rainbow, while the B200 is more suitable for violins and flutes.

The treble range of both IEM’s extends pretty well and has enough presence for most music genres. The Brainwavz B200 offers more micro detail especially when I did listen to instruments like cymbals, while it can sound a bit too dry compared to the more musical treble tonality of the Hidizs MS1 Rainbow. 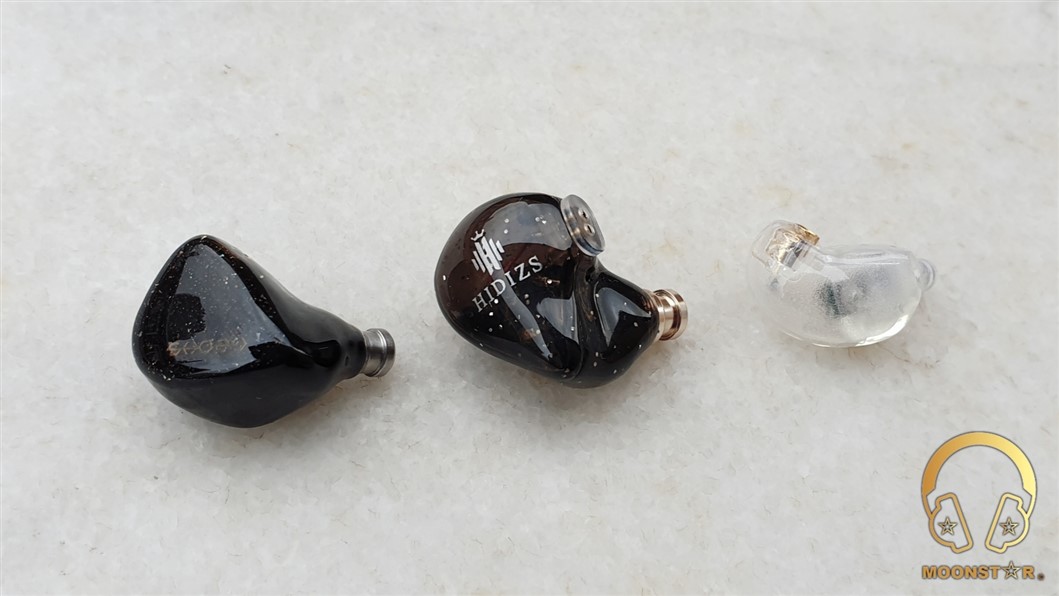 Hidizs has shown with the MS1 Rainbow that an IEM below the 100 USD mark can do sound entertaining and fairly detailed as well. The mildly v-shaped sound signature with a fast bass response, transparent midrange and fairly good extending treble range that needs some burn-in are some nice sound highlights of the MS1 Rainbow.