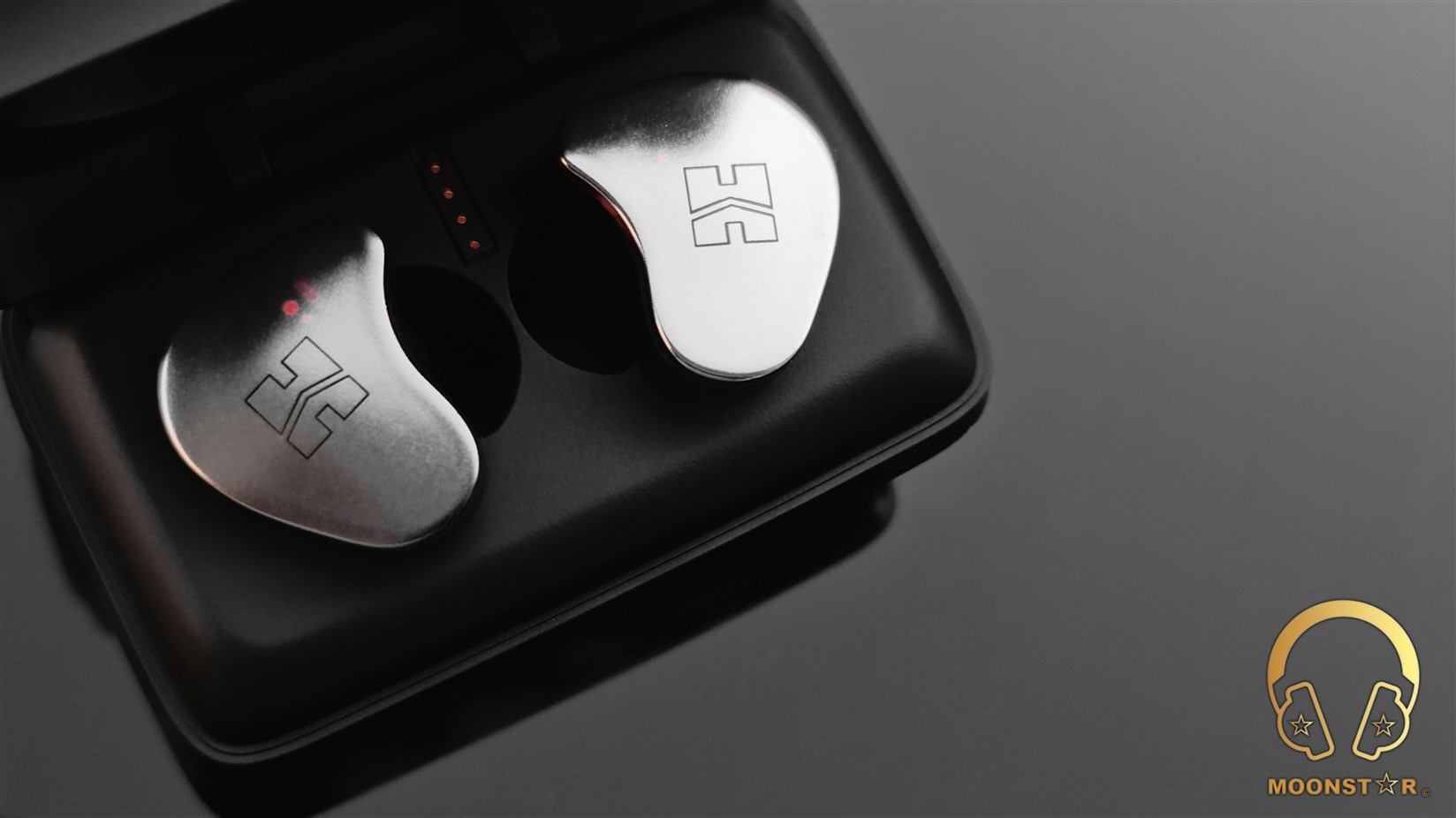 Hifiman was founded by Dr. Fang in New York – USA and is one of the most well known personal audio companies in the audiophile word.

Hifiman has a wide variety of Hi-Fi, Reference and Premium class products like Portable Audio Players, Planar Magnetic Headphones, Desktop Amplifiers, Earphones, IEM’s and True Wireless Monitors like the TWS600 and now the new TWS800 that I will now review for you.

The TWS800 is the second True Wireless earphone of the company that features HiFiMAN’s Topology Diaphragm with a so called 150Ω high impedance alloy voice coil. The TWS800 comes with a build-in Amplifier for the high impedance voice coil and supports also Bluetooth 5.0, IPX4 Sweat & Dirt certification and touch controls. 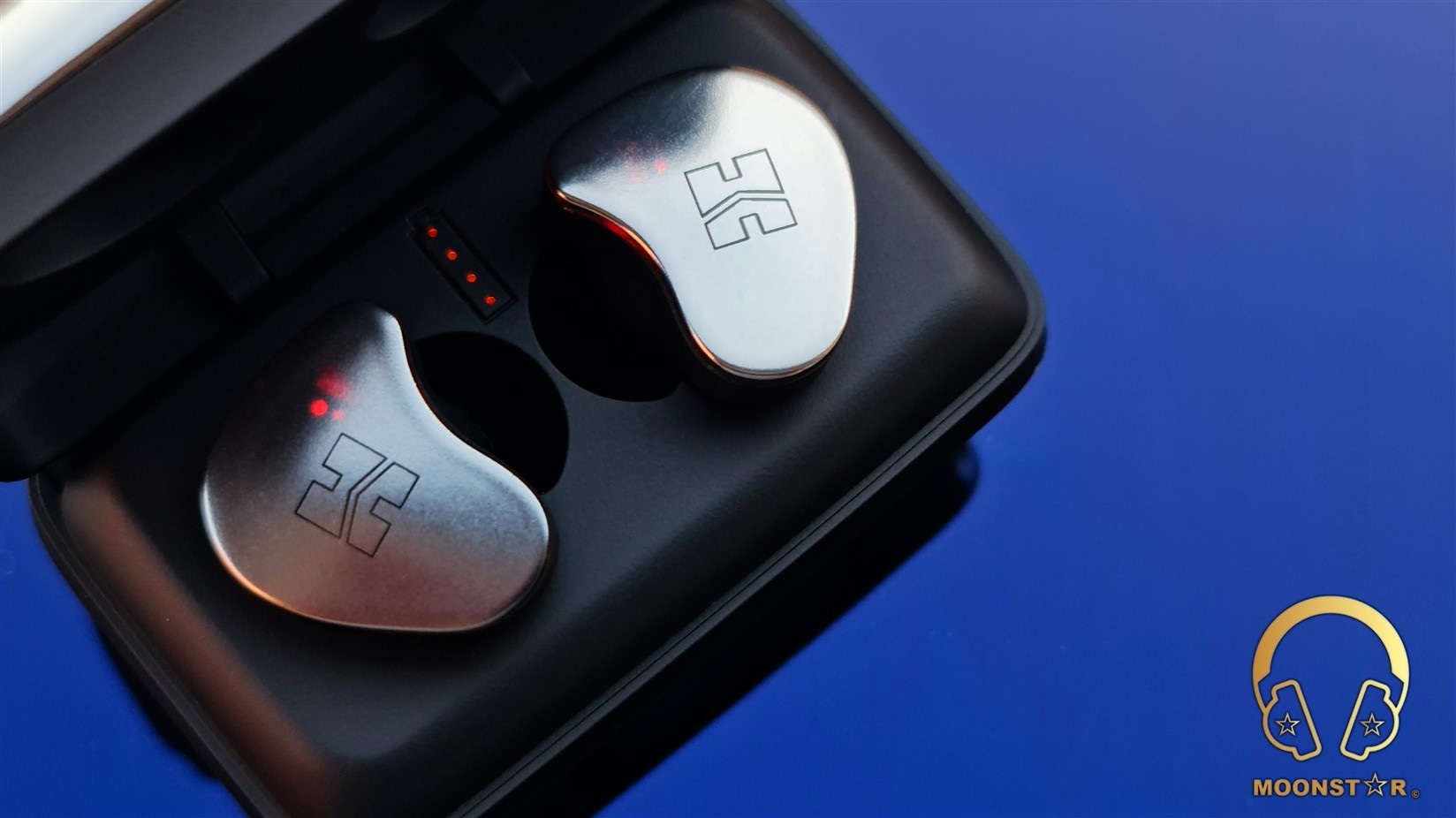 I would like to thank HiFiMAN for providing me the TWS800 sample for review purposes. I am not affiliated with HiFiMAN beyond this review and all these words reflect my true and unaltered opinions about the product.

The MSRP price for the HiFiMAN TWS800 is about 299,00 USD. More information’s can be found under the link below;

The TWS800 TWS IEM came in a rectangular white box which features the product branding and illustrations of the product. 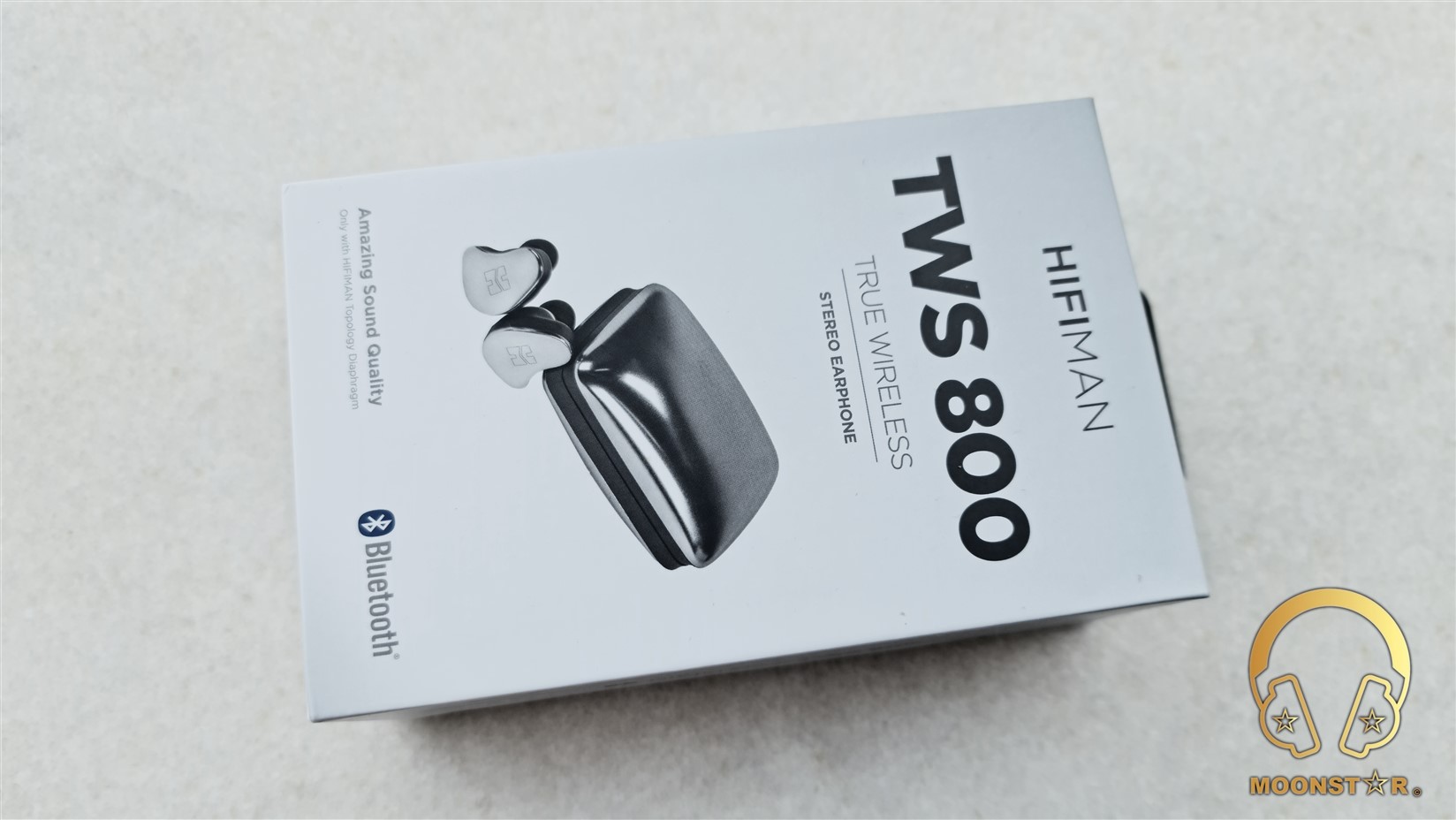 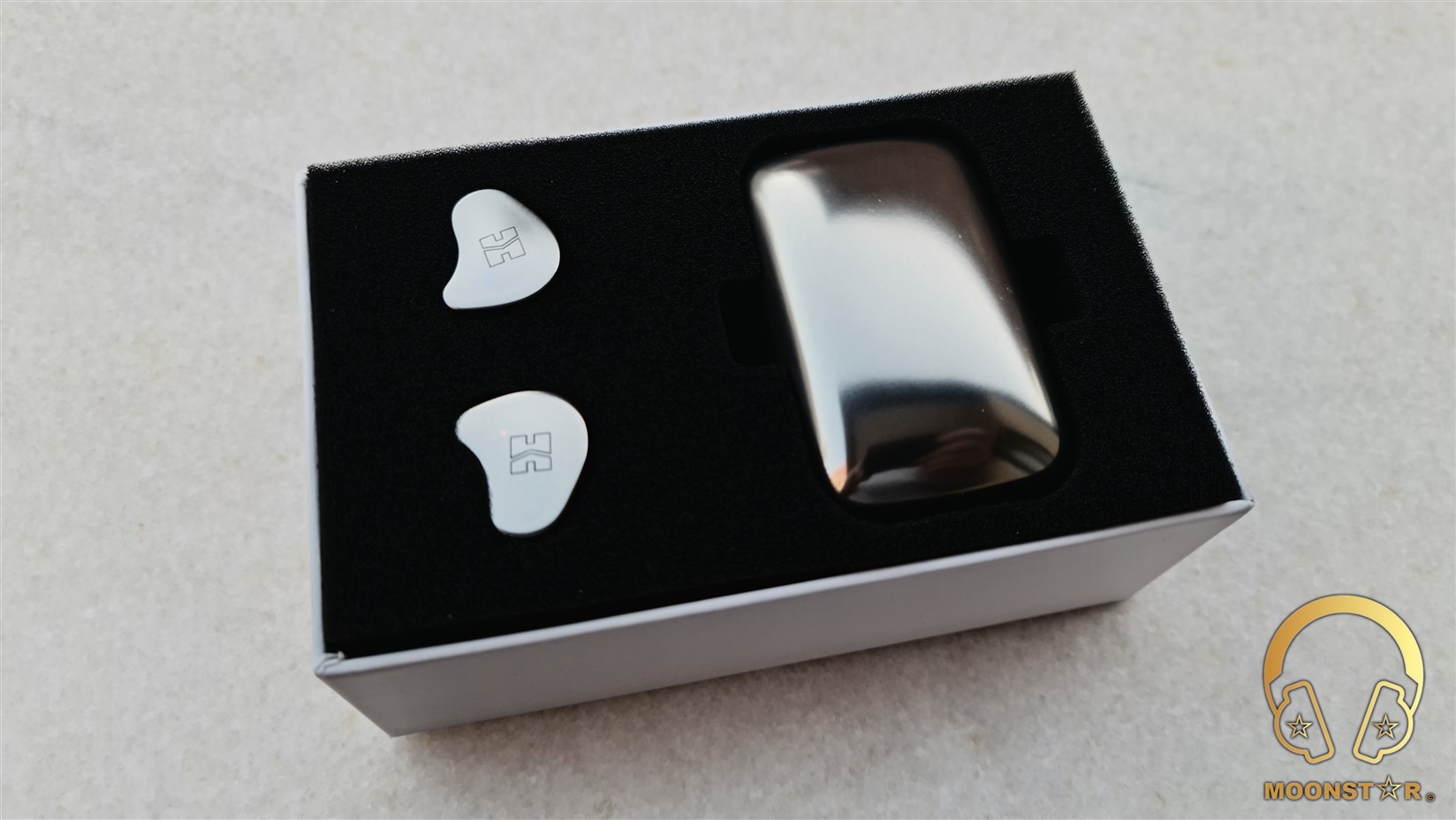 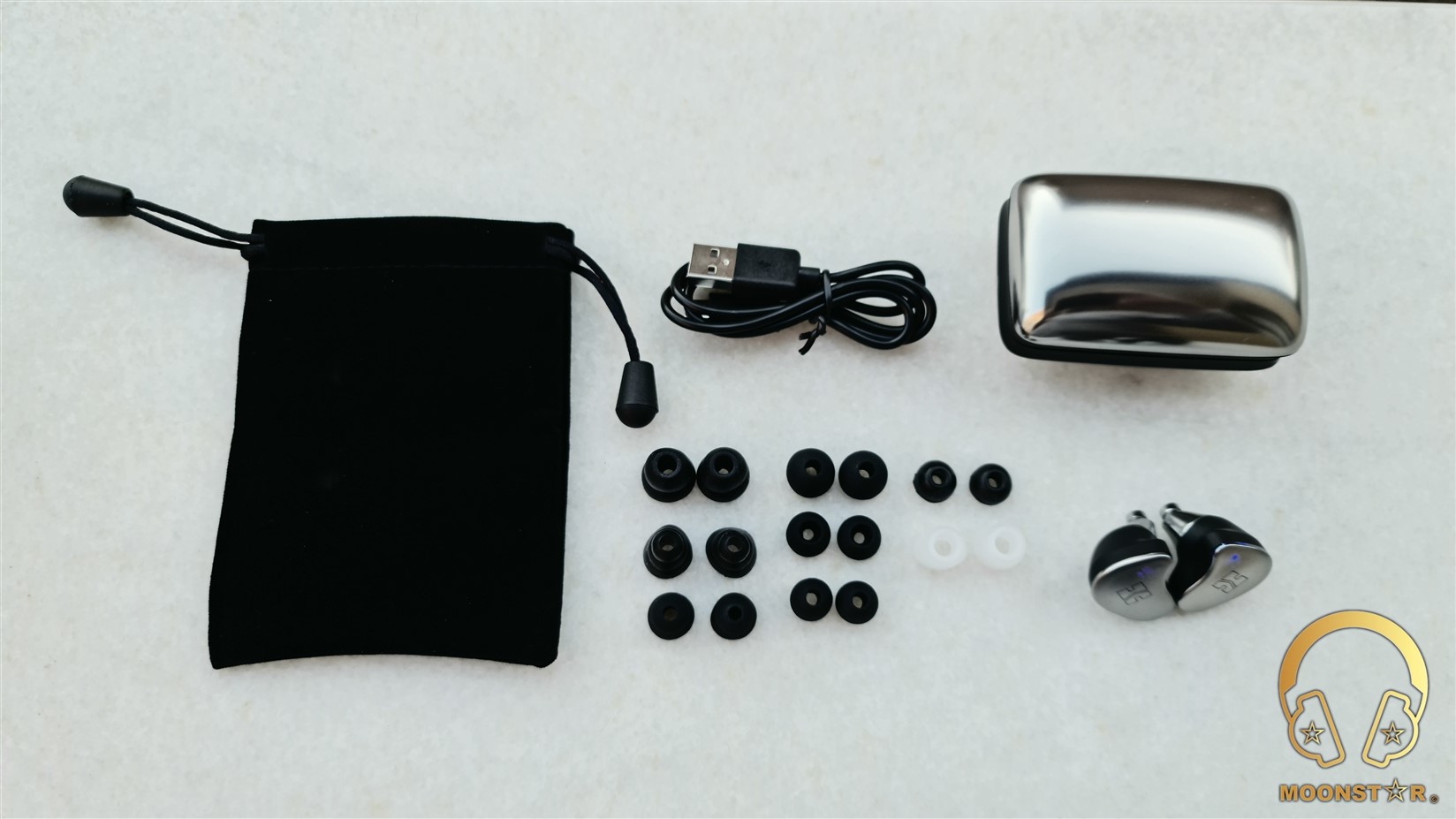 The HiFiMAN TWS800 has a different design compared to other TWS Earphones/IEM’s on the market including the predecessor TWS600 which have had also a pretty unique appearance. 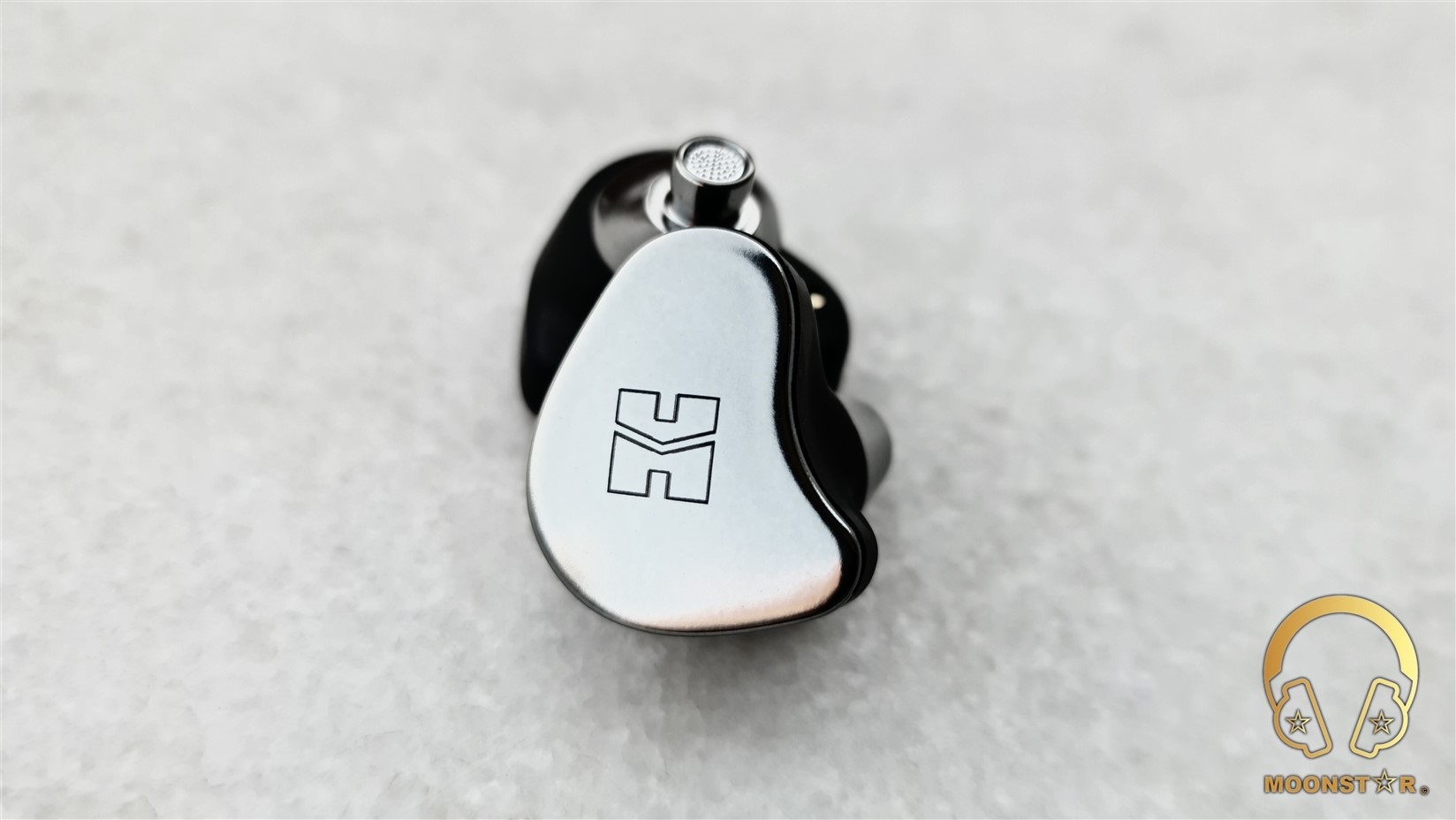 The TWS800 features HiFiMAN’s Single Dynamic Driver with a Topology Diaphragm same as the RE800, RE2000 and the TWS600 with an addition, which is a so-called 150Ω High Impedance Alloy Voice Coil and this voice coil is powered with a build-in amplifier.

The monitor housing has an average size and is mainly made of plastic material with exception of the sound nozzle spout which looks like aluminum. This helps to make the monitors pretty lightweight with about 6.9gram. 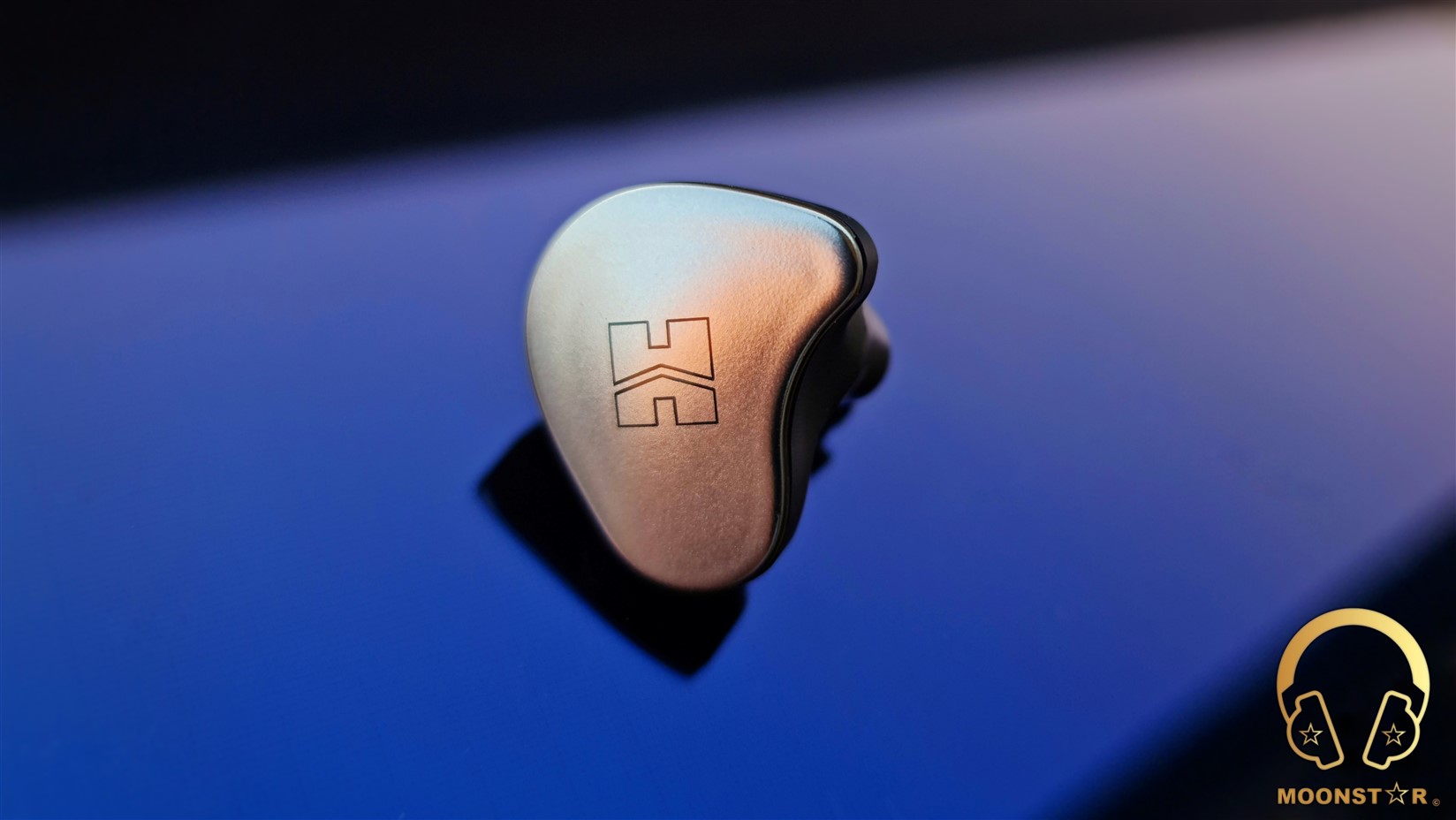 On the front of the monitors shell is the faceplate that is made of plastic with a glossy metallic finish and sports the HiFiMAN logo in black color. 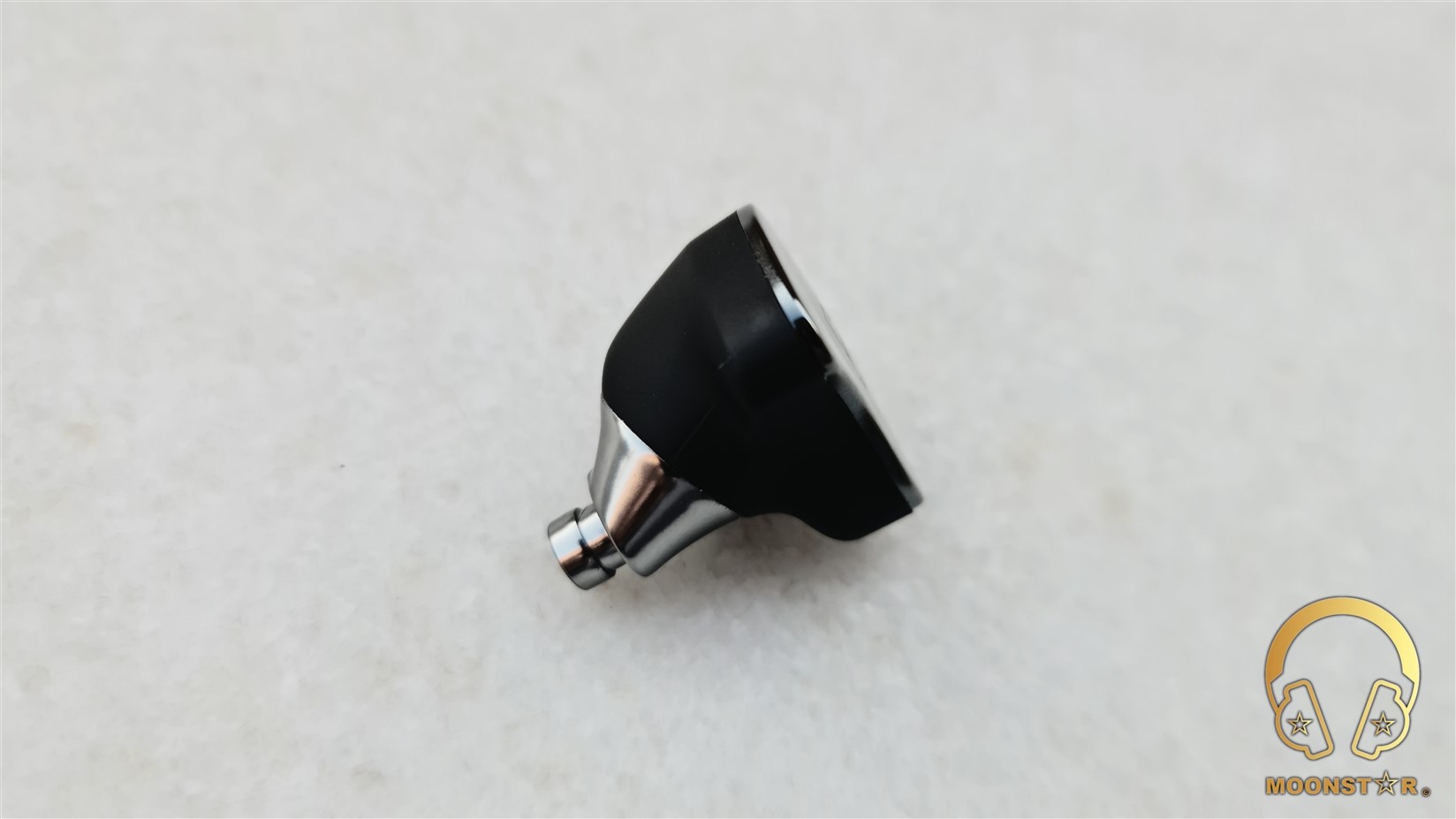 Under those faceplates are LED status indicators that do light up in blue & red color, which are visible on the metallic glossy surface. 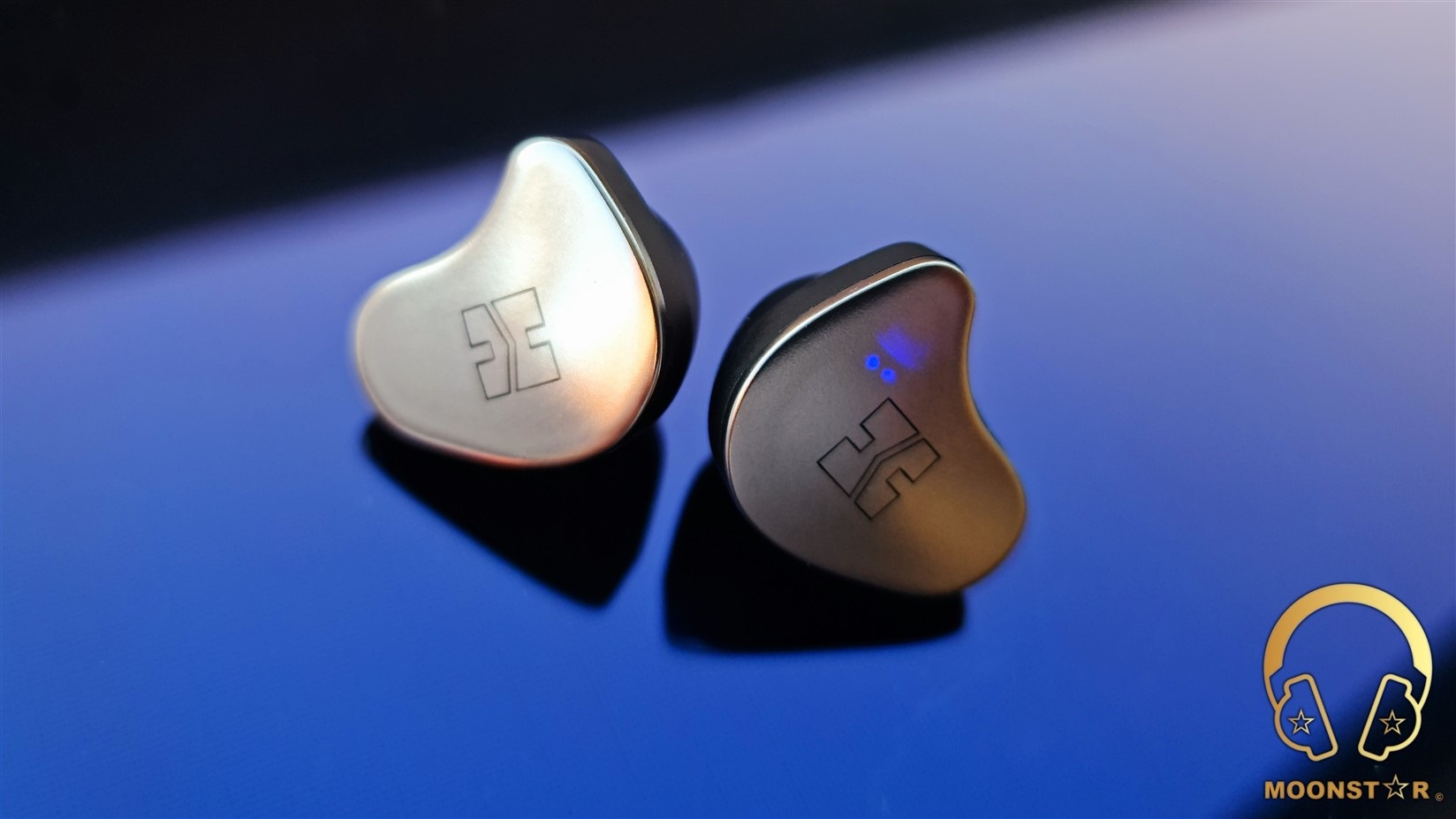 The surface acts as a touch control interface for commands like volume up/down, next/last track, play/pause and long press for voice assistant.

The inner surface is a combination of three parts which are mainly made of plastic material except the sound nozzle which seems to be made of metal in silver color. 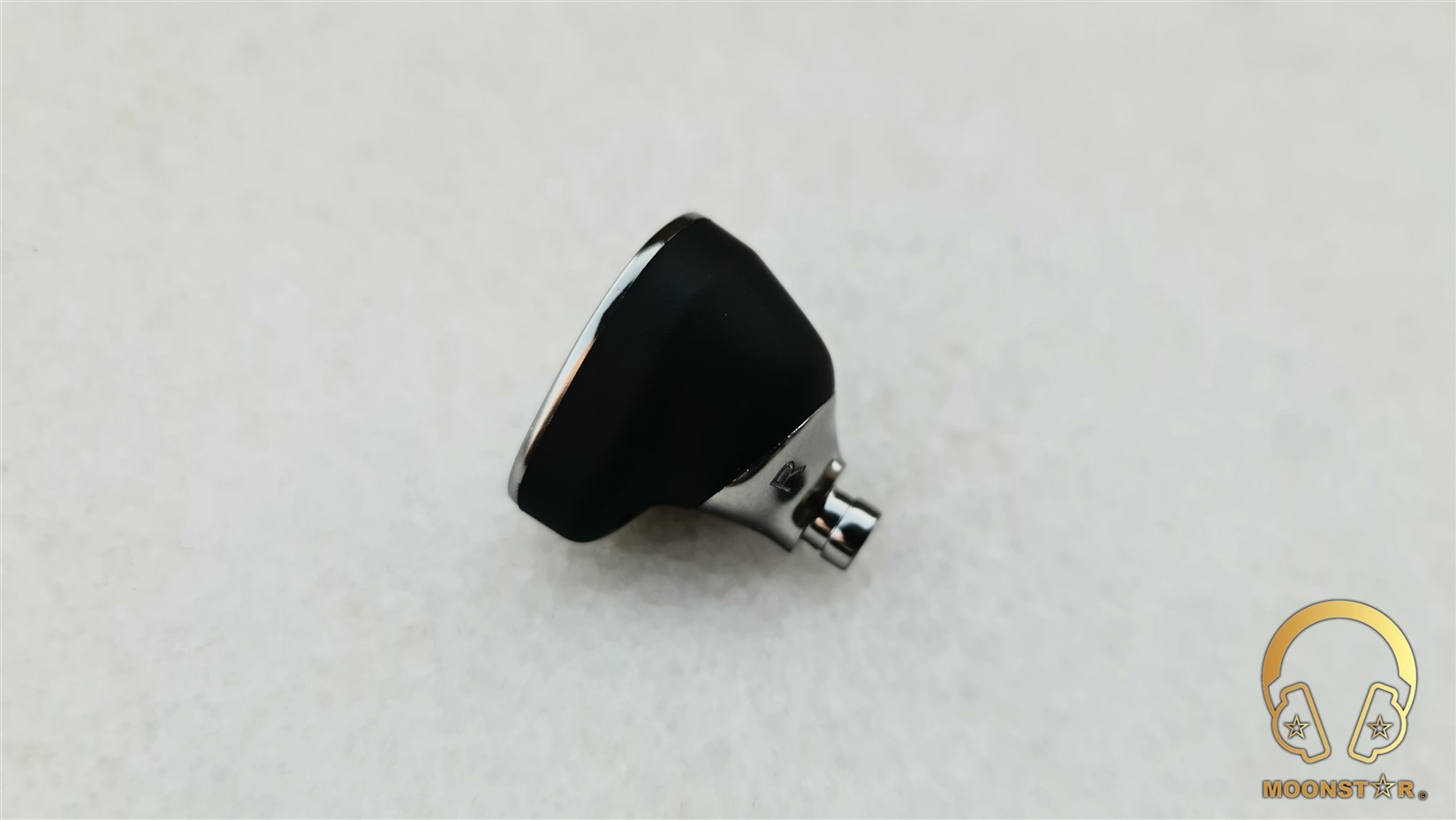 The main mart is of plastic with a soft rubber like coating in black color, while the second part shows a glossy metallic like finish with L (Left) and T (Right) markings on the top. 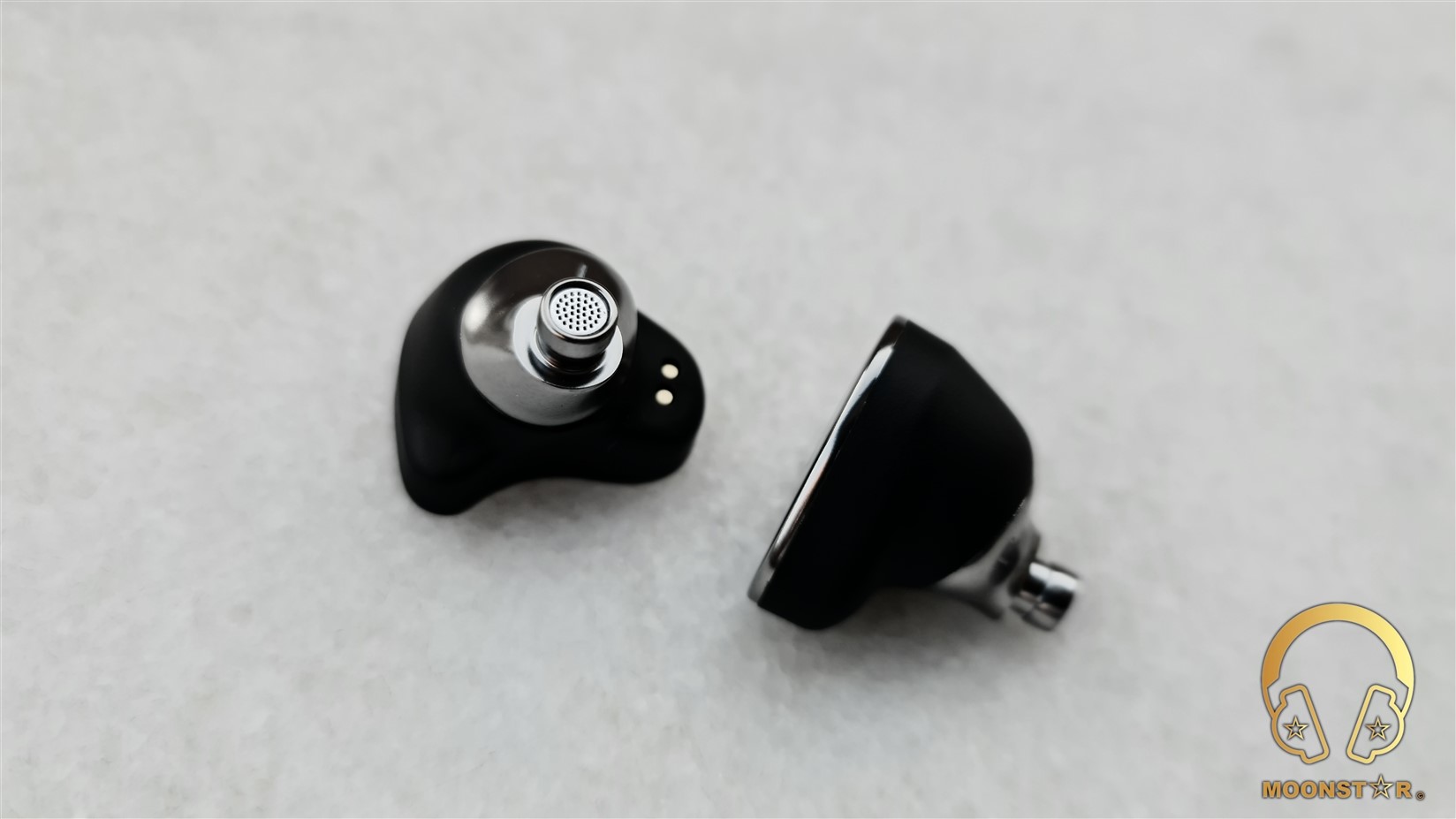 The sound nozzles do have small lips to offer extra grip to the ear tips due to the relative short size of the spout. 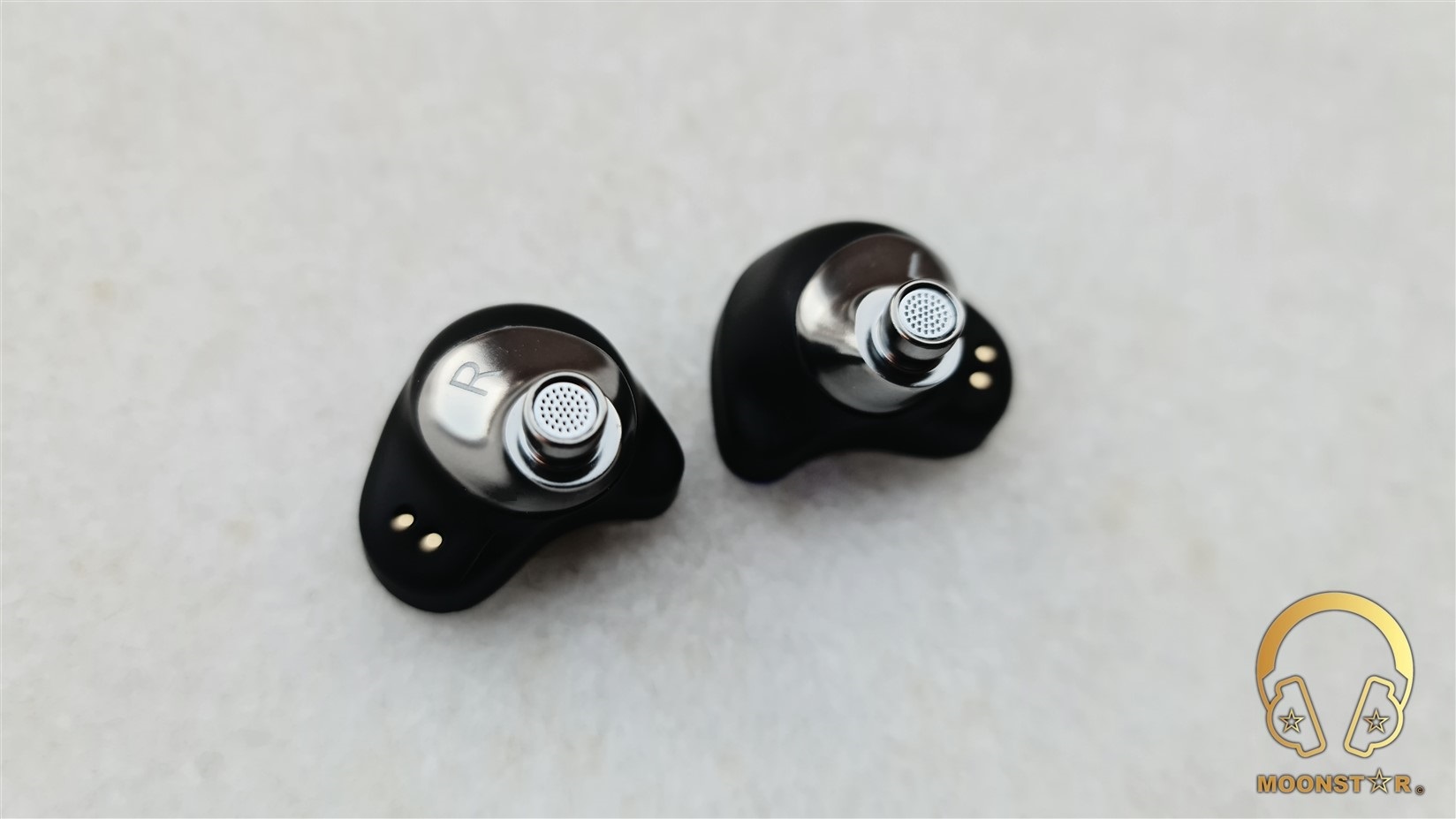 On the top of the sound nozzle is a metal mesh to prevent the insertion of unwanted particles like dust, ear-wax, etc.

The charging case of the TWS800 TWS has a pretty compact size and shape and weights only 57,7grams. 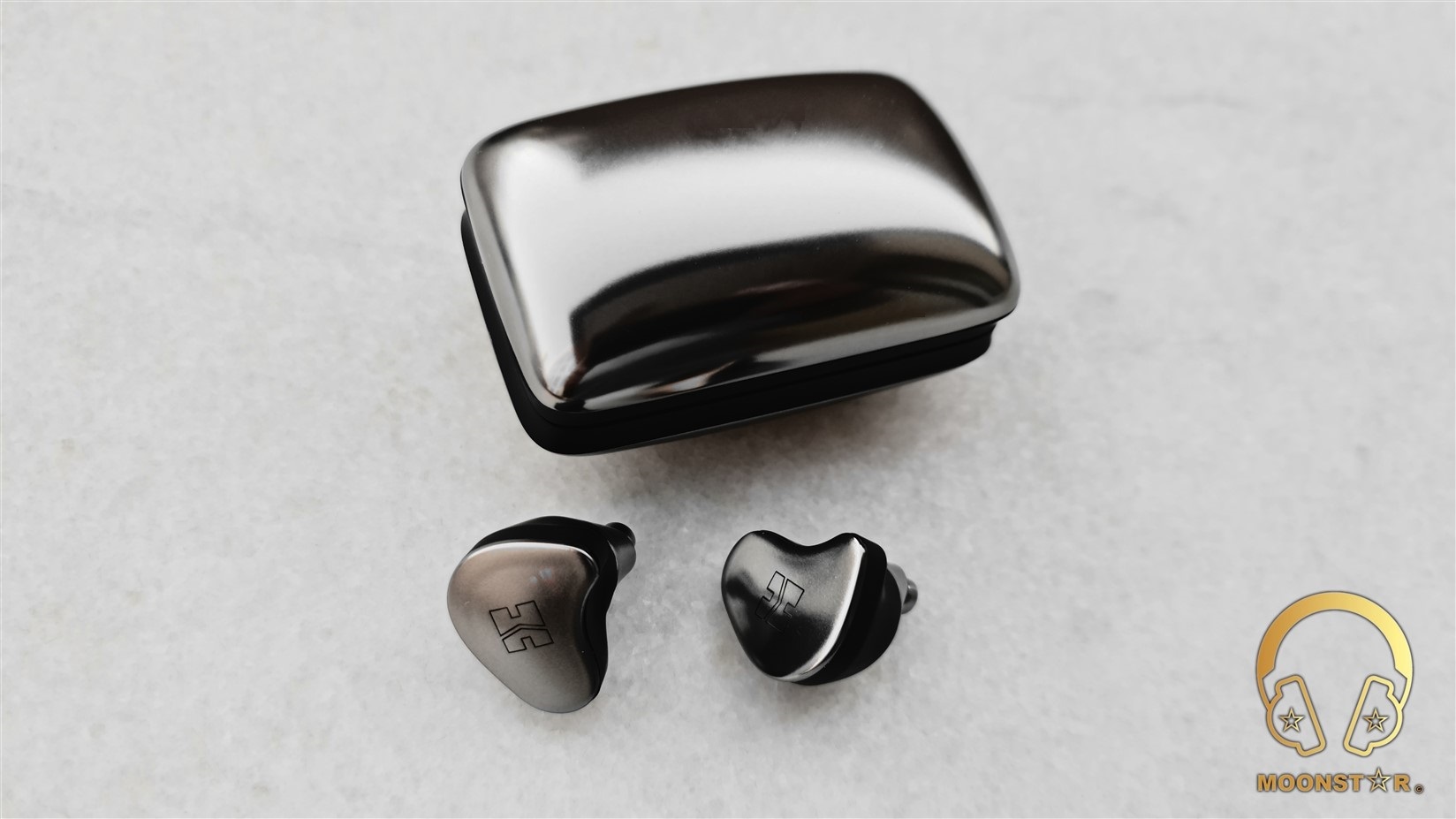 The top and the bottom of the case have a smooth metallic surface while the rest is made of plastic material in black color. 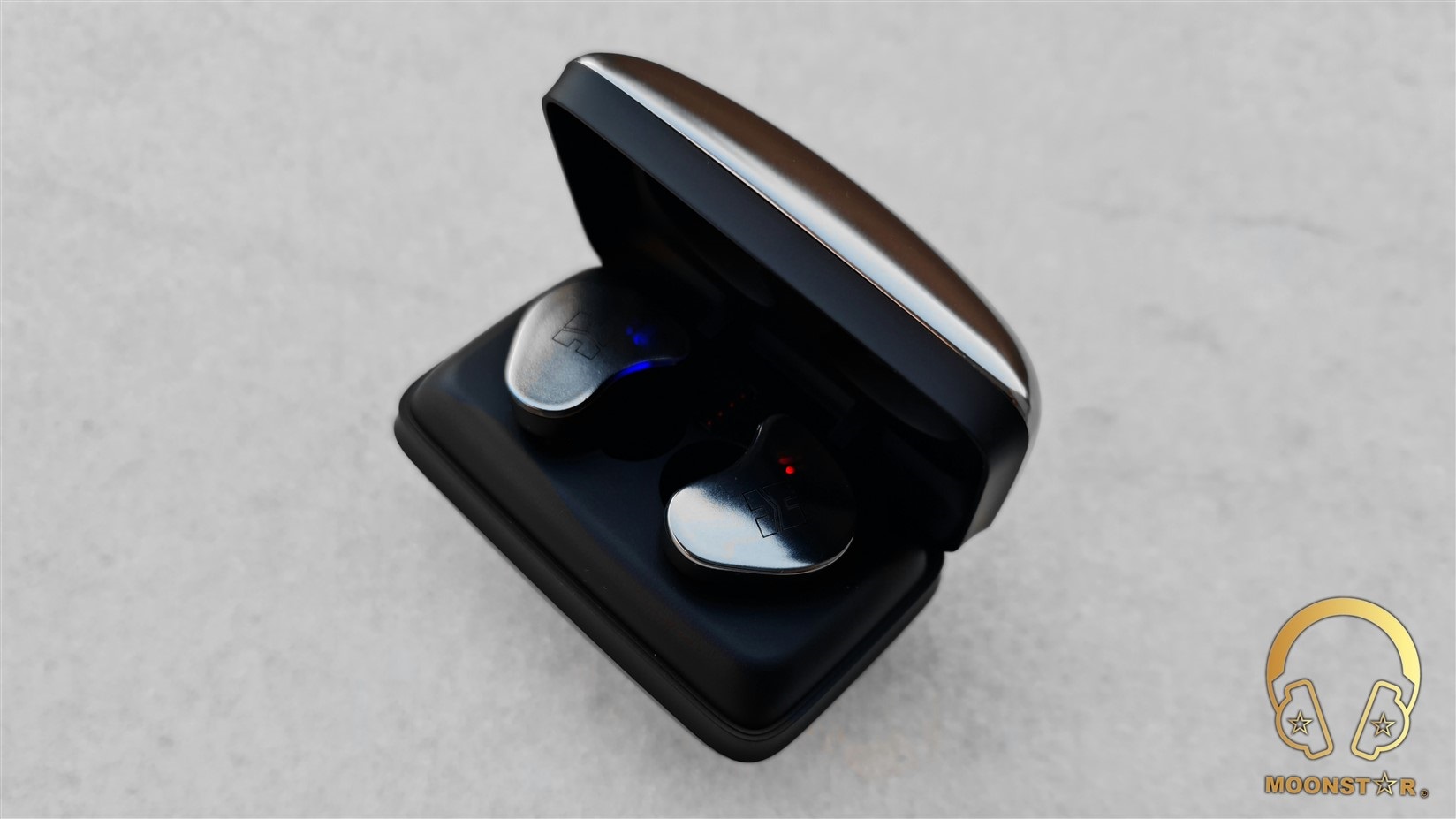 At the rear side of the case is the USB Type-C port to charge the build-in battery of the TWS800 charging case. When you open the case you will see the seats for the Wireless Monitors, the Left / Right markings and four LED light dots in the center that do lights up in orange when you put the monitors in to the seats or if you connect it o the charger. 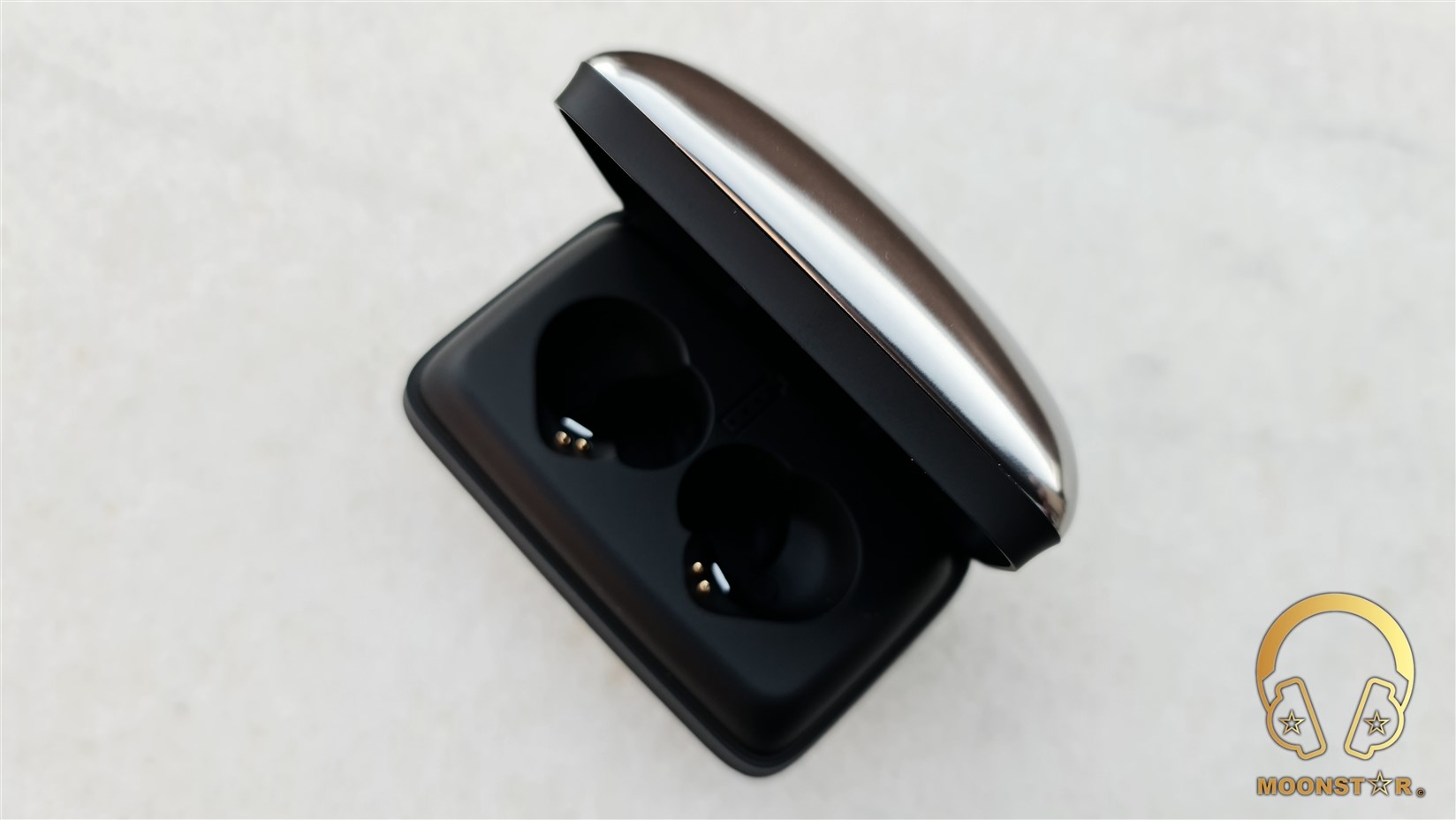 These seats have a magnetic surface to ensure the right connection for the charging process and to avoid any drop out of the monitors. At the bottom of the case are some branding and some information’s about industrial standards and certifications.

The HiFiMAN TWS800 offers a music playtime of approx 4.5 – 4 hours. The charging case has a battery capacity of 800mAh and is able to fully charge each monitor for about 6 times, which means you will get “plus” about 26 – 27 hours.

The pairing of the TWS800 is pretty easy; you only need to turn on the left and right monitors for the first time. After that, the earpieces did pair automatically with my Samsung Galaxy S9 plus Smartphone.

When it comes to the signal strength, I can say that the stable operating distance for the TWS800 was about 9 – 10 meters, when paired with the Galaxy S9 Plus & iPad Air2.

The microphone is not one of the strengths of the TWS800 and offers an average performance paired with my Samsung Galaxy S9 Plus.

The HiFiMAN TWS800 shows a very low (maybe some milliseconds) latency (lip sync delay) while watching to TV Shows on YouTube and movies on Netflix, paired with my Samsung Galaxy S9 Plus and Apple iPad Air2 tablet.

The multifunctional button can do the following actions; 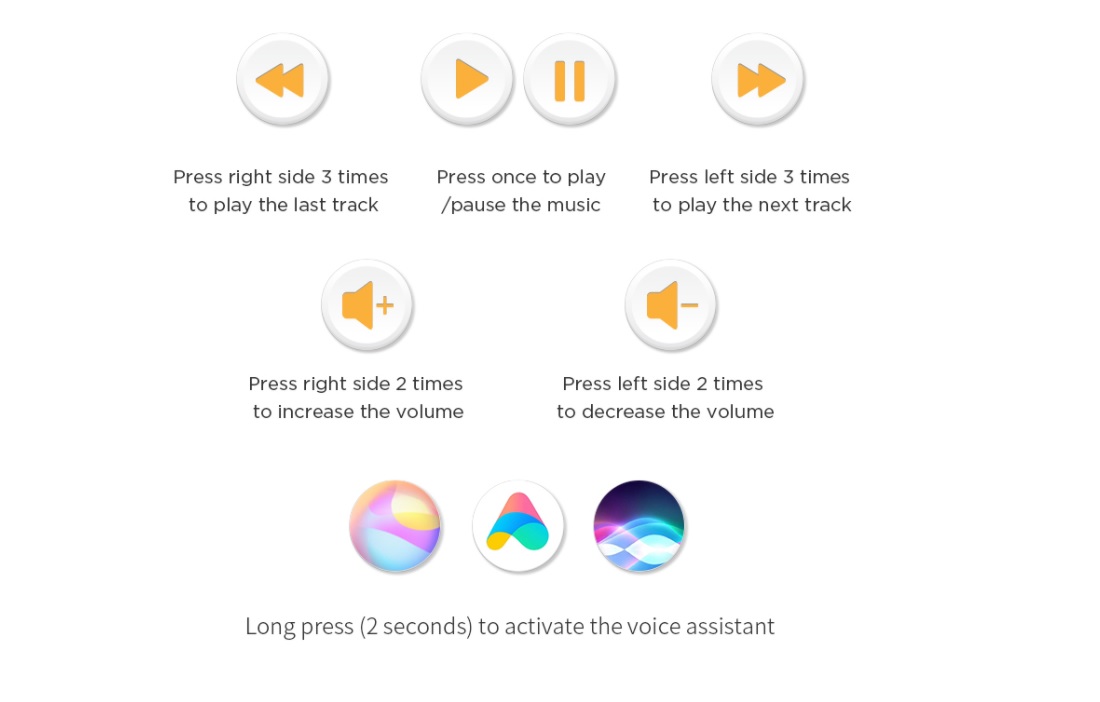 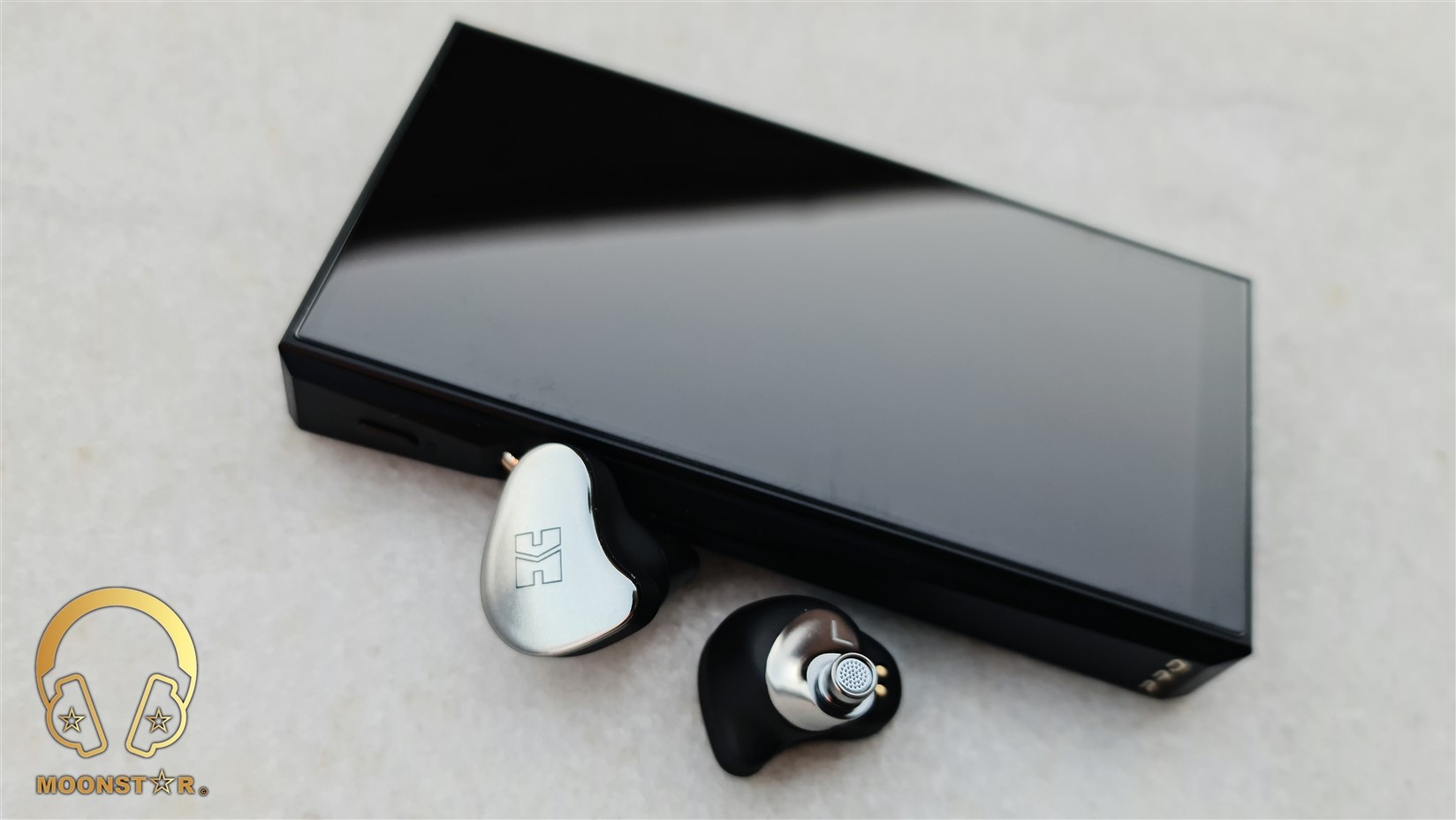 The HiFiMAN TWS800 is a true wireless earphone with a pretty balanced sound signature that offers a linear bass response, quite natural and detailed midrange and treble presentation with good amount of transparency.

The bass of the HiFiMAN TWS800 shows enough intensity and depth for genres such like Metal, Jazz, Blues or Acoustic music, while subbass rumble and intensity is maybe a bit shy for genres like EDM, Trance, Rnb, etc.

The TWS800 has a nicely highlighted, controlled and fast midbass response, with no negative situations like a midbass-hump or muddiness and mixings. The midbass shows in general slightly more intensity and quantity compared to the subbass area, and is pretty successful in terms of tightness and separation, especially for a True Wireless IEM/Earphone.

The midrange of the TWS800 sounds quite transparent, natural and detailed thanks to the well tuned Topology Diaphragm. The midrange shows slightly amount of warmness that is produced by the lower midrange area. The upper midrange on the other hand shows a safe tuning which is mildly bright and pronounced. It offers a good level of detail retrieval and extension, without to sound sibilant or harsh.

I like the vocal presentation of HiFiMAN product and the TWS800 is not an exception. Male vocals from Isaac Hayes to Elton John do sound pretty emotional and clear, while I would wish slightly more fullness and body. Female vocals on the other hand do sound fairly transparent, detailed and do have a quite natural timbre which stands out compared to many TWS products on the market. 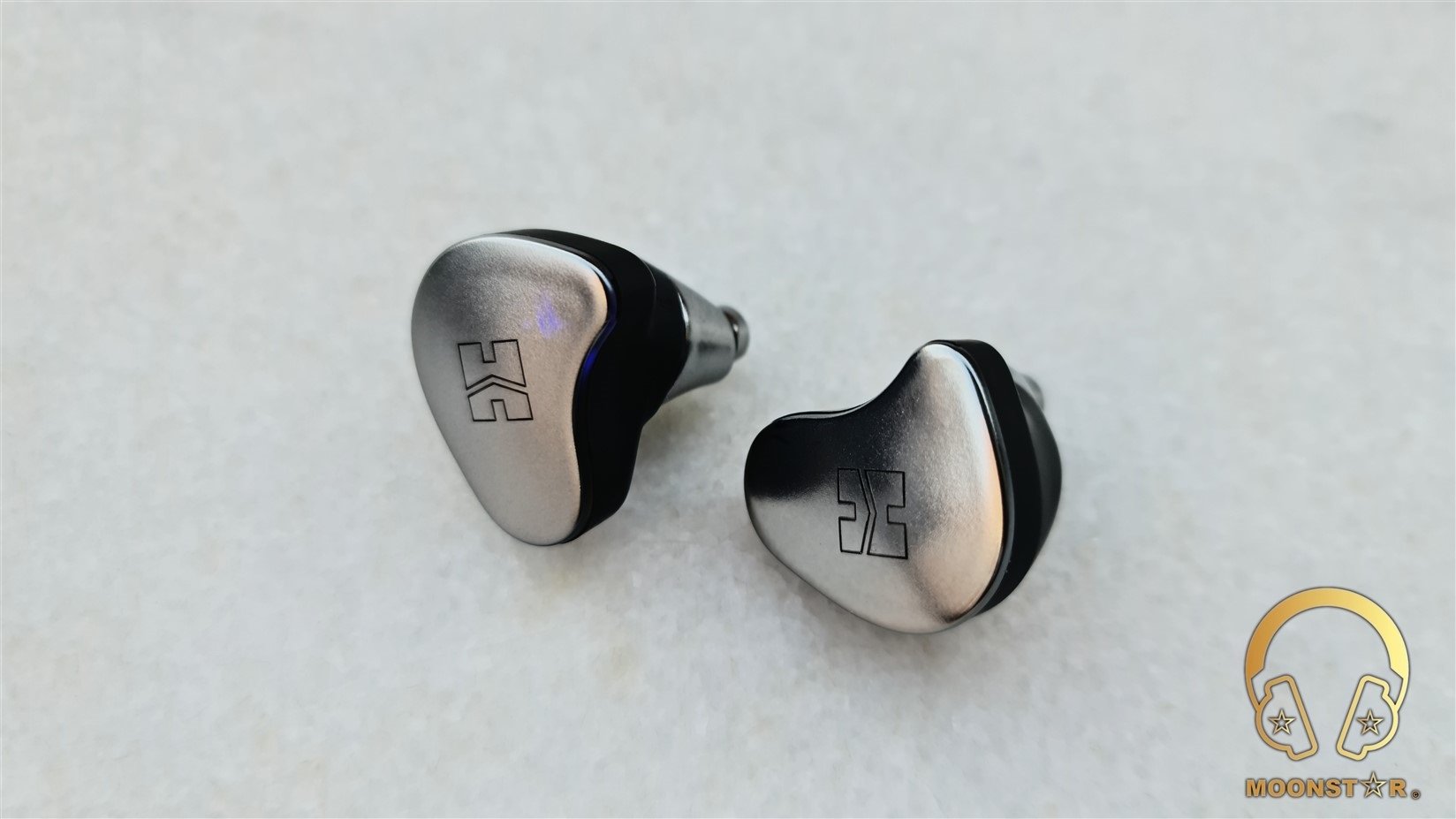 The HiFiMAN TWS800 has an instrument tonality that is neither thin nor too thick in its presentation. Instruments like elector guitars are slightly bright and do have a moderate level of body and extension, while other instruments like violins and pianos do have average extension and do sound fairly detailed.

The treble range of the TWS800 shows sufficient amount of intensity and moderate level of extension and detail retrieval. The lower treble range seems to be more highlighted compared to the upper treble area that shows a controlled roll-off. The overall treble presentation is smooth, fairly detailed for a TWS Earphone/IEM and ideal for longer listening periods on the go, without to sound peaky or sharp.

The HiFiMAN TWS800 offers a surprisingly good performance in terms of separation and placement of instruments and vocals. The stage has a moderate level of airiness and shows slightly better soundstage wideness than its depth.

Both the TWS800 and N6PRO are some of the few products that I have listened to, which do have a remarkable audiophile level like sound performance.

The NUARL N6 Pro has a closer to V shaped sound signature with slightly more coloration compared to the HiFiMAN TWS800 that sounds more natural and balanced in the whole sound spectrum. 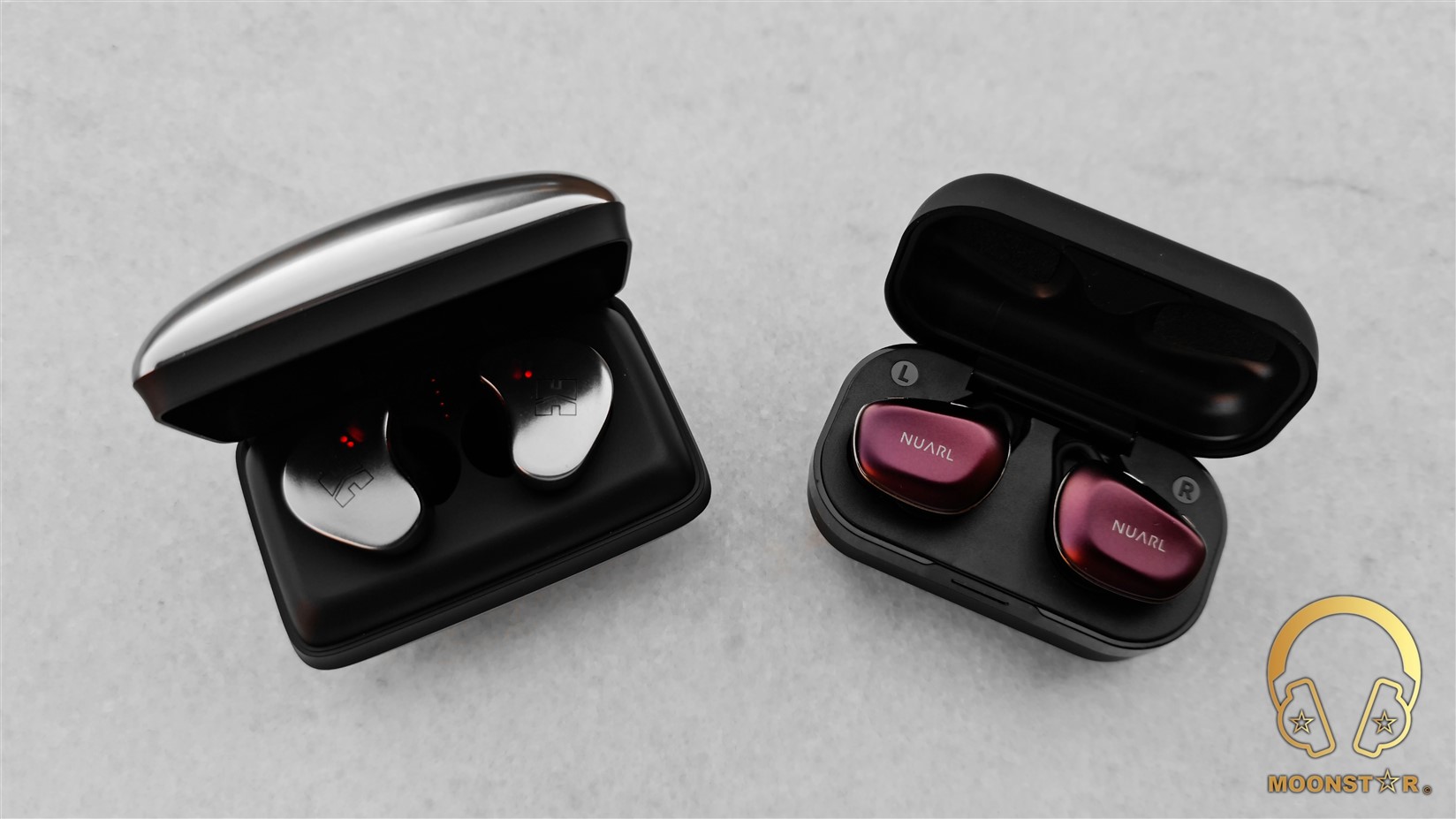 The midrange of the TWS800 is more pronounced and upfront oriented compared to the N6 Pro that sounds a bit recessed in this area due to its close to V shaped sound signature. The HiFiMAN TWS800 offers slightly more clarity and higher level detail retrieval compared to the NUARL N6 Pro which is otherwise pretty good in this regarding, especially for its lower price.

Both male and female vocals do sound more natural and detailed when I do listen to them with the TWS800, while the N6 Pro has a slightly edge for male vocals when it comes to the lower midrange depth.

The treble range of the NUARL N6 Pro offers slightly better level of extension and detail retrieval, while both are successful in terms of control in moments when instruments do play with higher level of distortion.

The HiFiMAN TWS800 has the edge in terms of soundstage wideness, while the NUARL N6 Pro is more successful when it comes to the depth.

To be honest, the HiFiMAN TWS600 was not my favorite TWS earphone in terms of overall sound character that was a bit to dry for my taste, while I did like the design, fit and the small form factor of its charging chase.

The TWS800 offers some significant upgrades in terms of sound, especially in the lower frequency region. Both the subbass and midbass region of the TWS800 has the upper hand in terms of intensity, depth and extension. The TWS600 is a bit faster in terms of bass response while the control of both earphones is decent. 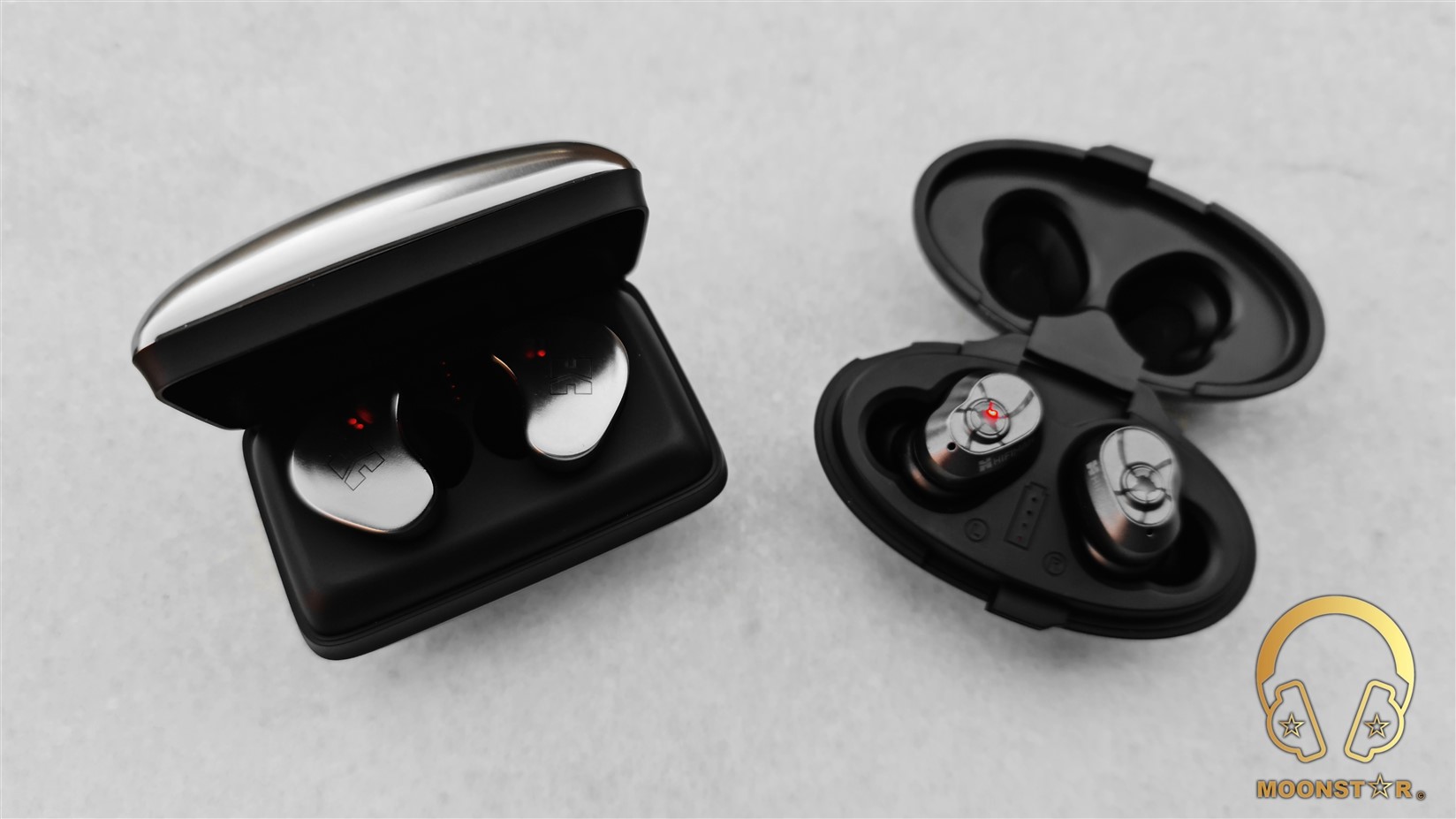 The midrange of the TWS800 sound fuller and more emotional compared to the TWS600 which sounds a bit to dry for my taste. The upper midrange of the TWS600 is more highlighted and slightly more detailed, while the TWS800 is more natural and forgiving in this area. The TWS800 is superior when it comes to the lower midrange depth, body and extension, which makes it more successful with male vocals or instruments like acoustic guitars or violas. Female vocals do sound slightly more detailed with the TWS600, while the TWS800 is superior in terms of naturalness and timbre.

The treble range of the HiFiMAN TWS800 shows a slightly better level extension and detail retrieval in the lower treble region, while the TWS600 offers some additional sparkle in the upper treble area.

The soundstage of the TWS800 has the upper hand in terms of soundstage wideness, while the performance for the depth is nearly identical. 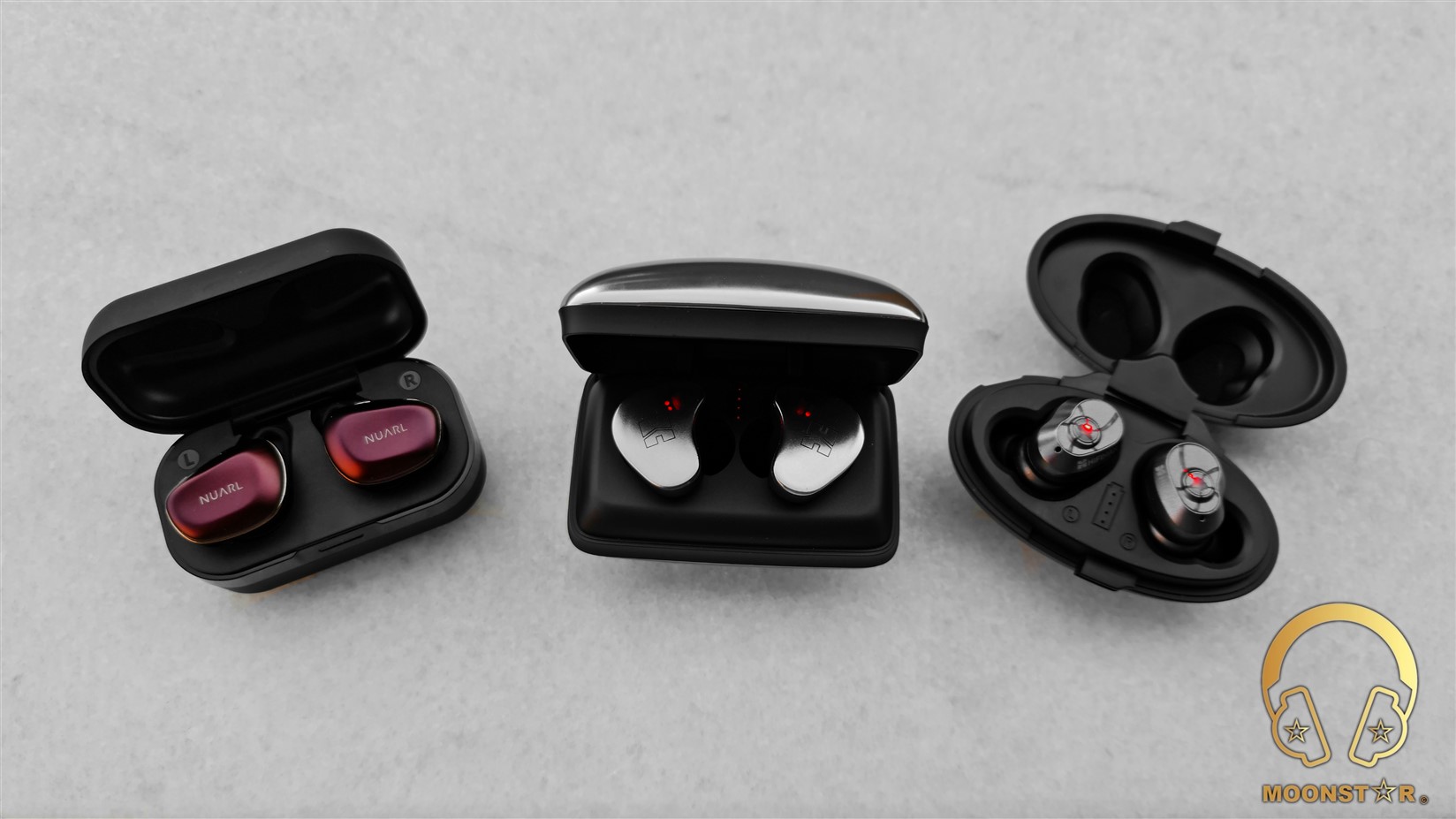 The HiFiMAN TWS800 is the second True Wireless earphone of the company with a quite different sound character and design language compared to the TWS600, which I think will suite the taste of a large audiophile community. The TWS800 is also one of my favorite TWS earphones with its pretty balanced and mature sound signature, thanks to its linear, fast & controlled bass response, and the quite natural and detailed midrange & treble presentation.