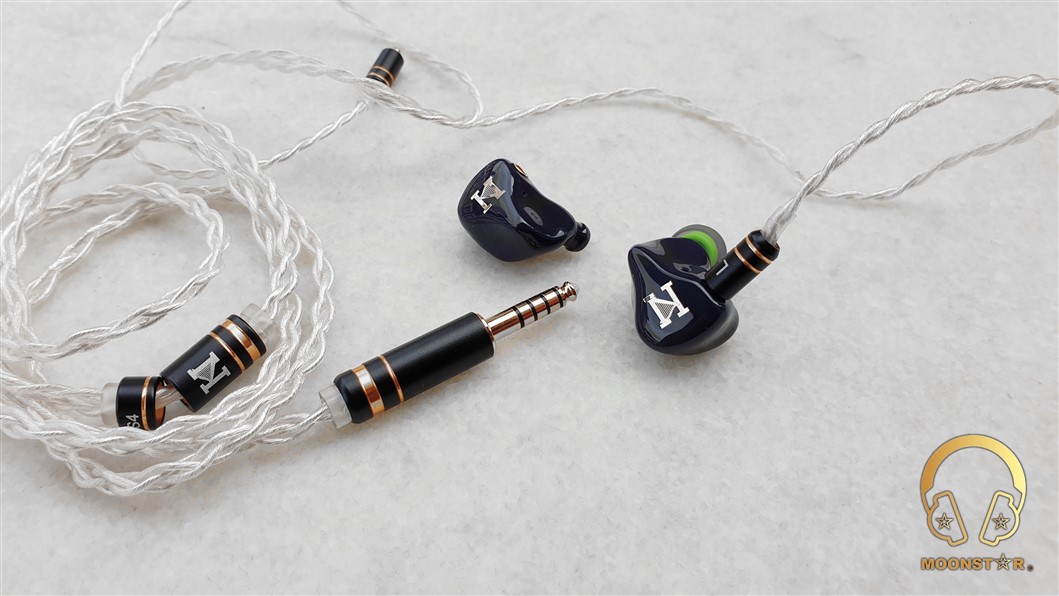 ISN Audio is a relative new Chinese brand that is producing portable audio gears like Earbuds, In-Ear Monitors and Cables. The ISN Audio D10 is an In-Ear Monitor with a 9mm diameter Single Dynamic Driver which is available with the new S4 OCC Sliver-plated cable that can be purchased with 3.5mm TRS, 2.5mm TRRS and 4.4mm headphone plugs.

I would like to thank ISN Audio for providing me the D10 IEM sample via Penon Audio for review purposes. I am not affiliated with ISN Audio and Penon Audio beyond this review and these words reflect my true and unaltered opinions about the product.

The ISN Audio D10 is available on Penon Audio for 175,00 USD under the link below:

The ISN Audio D10 is coming in a small rectangular box that is wrapped with a cardboard which shows the illustration and some brandings of the D10 In-Ear Monitor. 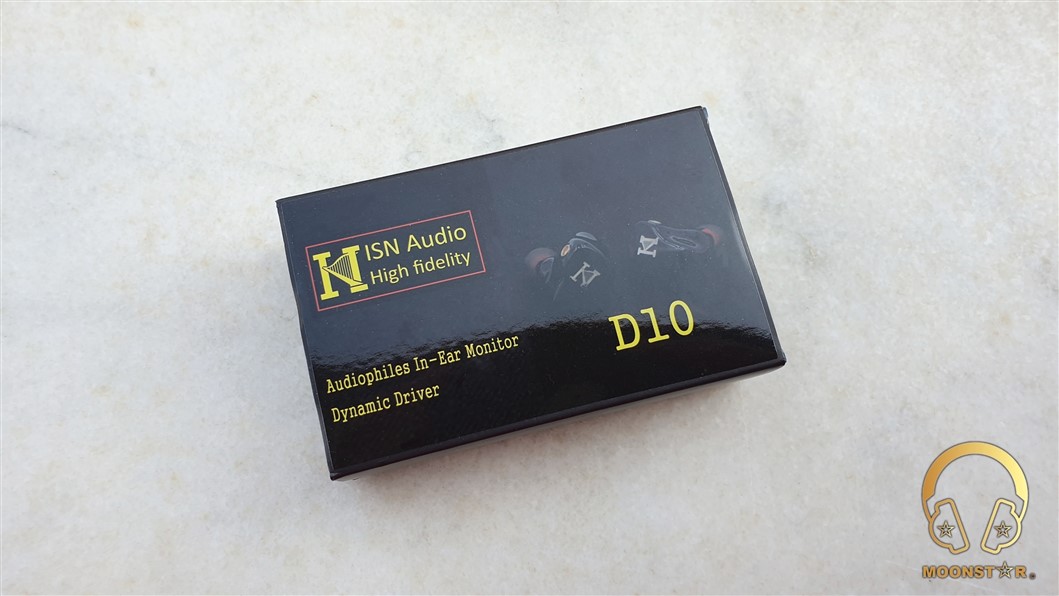 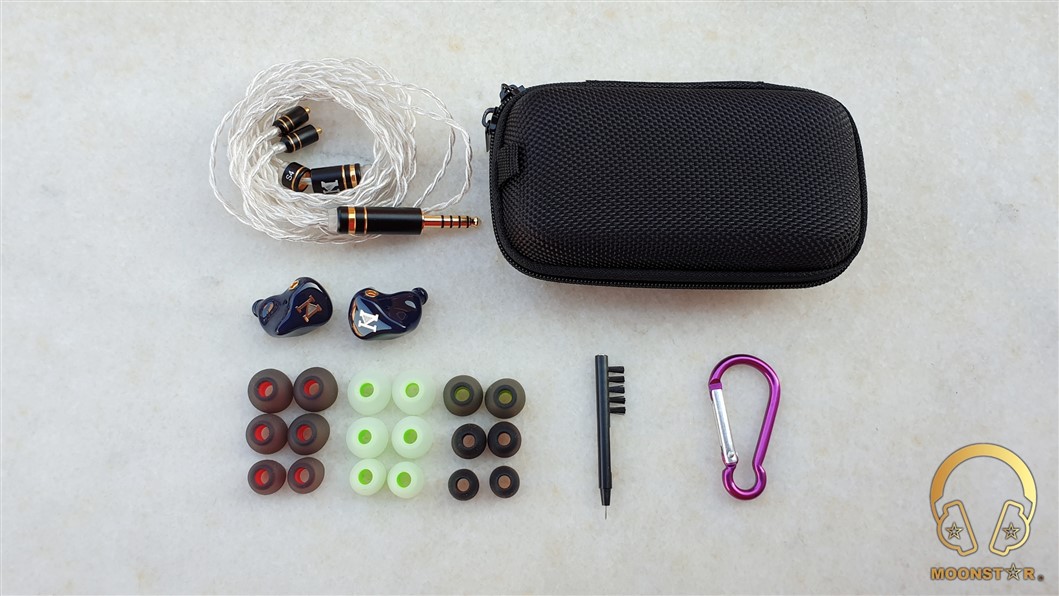 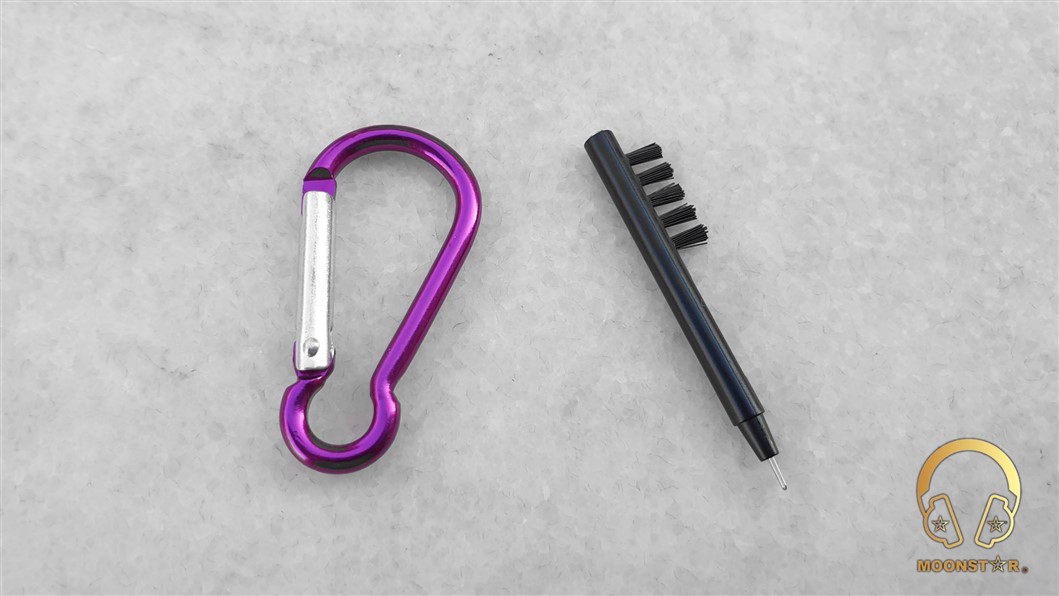 The ISN Audio D10 is an IEM with a nice semi-custom like monitor shell which is made of resin material in dark purple (purple-black) color with a glossy finish. Inside the D10 is a 9mm diameter single dynamic driver. 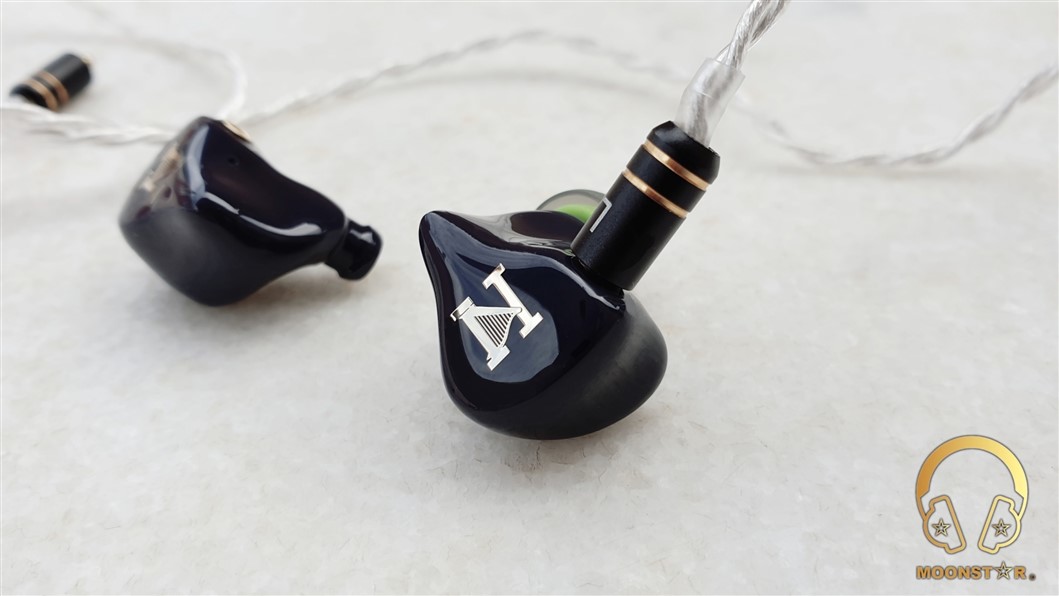 On the front of the monitor shell is the so called faceplate that features the ISN Audio brand logo which is inspired by a harp instrument in golden color. 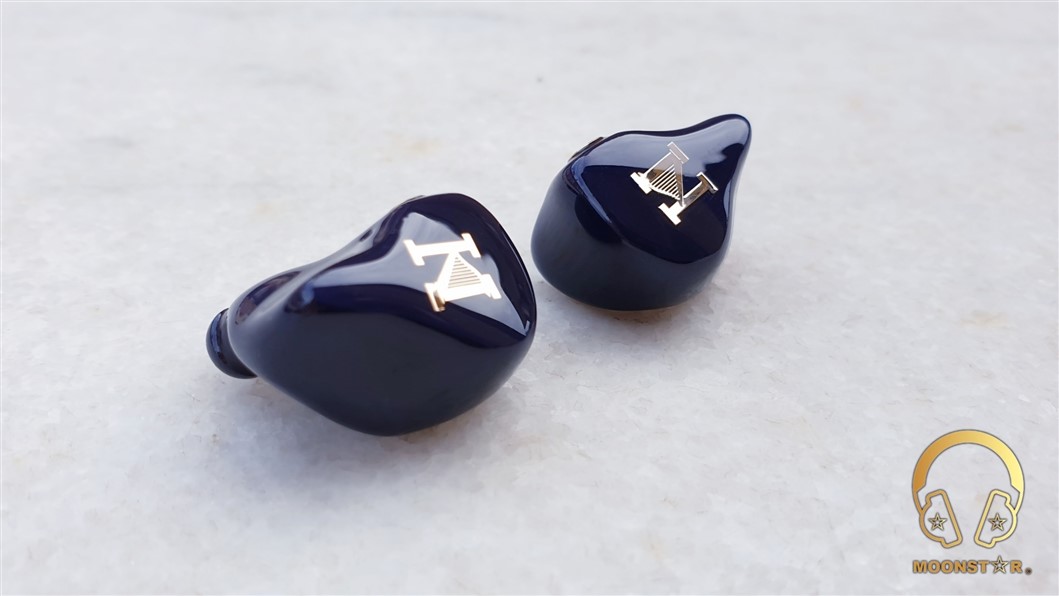 At the rear side of the monitor shell is sound nozzle and the surface which fits to your ear concha thanks to semi-custom shaping. 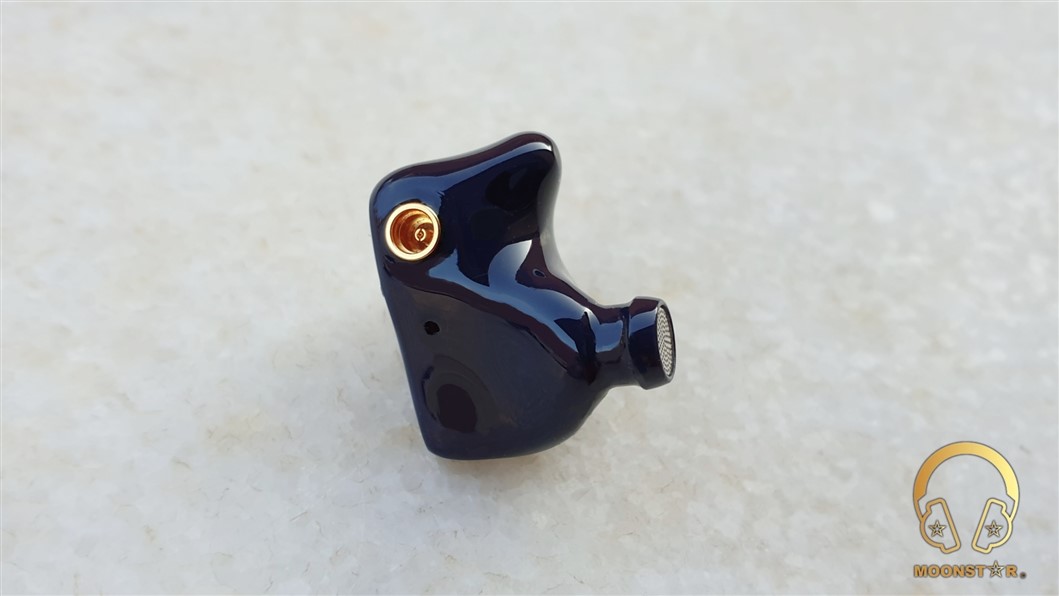 The sound nozzle has a fine metal mesh in gold color on the top to prevent the insertion of dust and earwax partials inside the monitor. Near the nozzle is a small vent that is needed for the 9mm diameter dynamic driver. 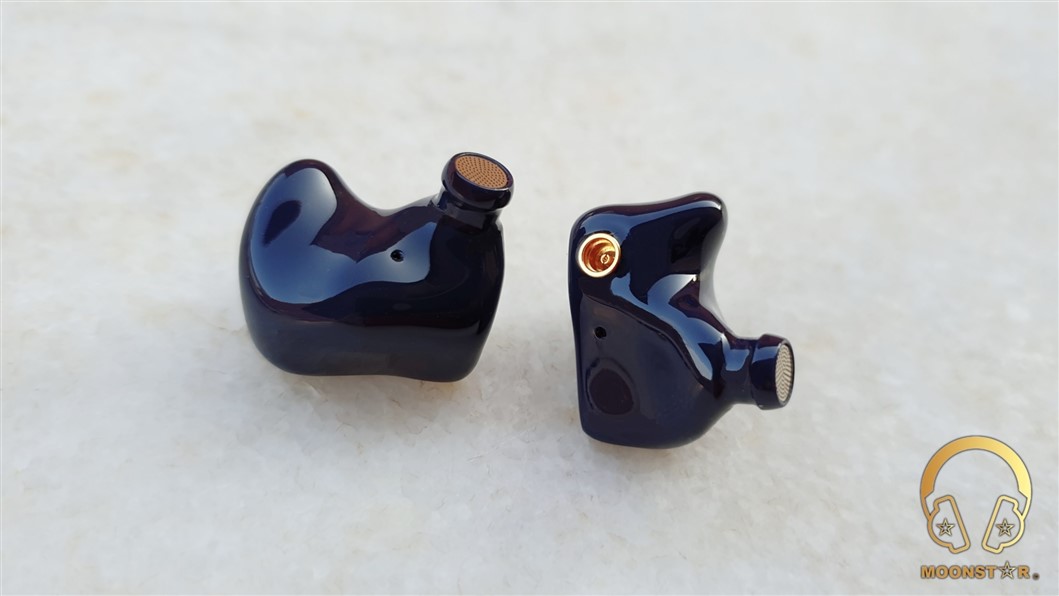 On the top of the housing is a second vent and the MMCX (Micro Miniature Coaxial) female connector which offers a pretty secure and tight connection with the male connector of the detachable cable. 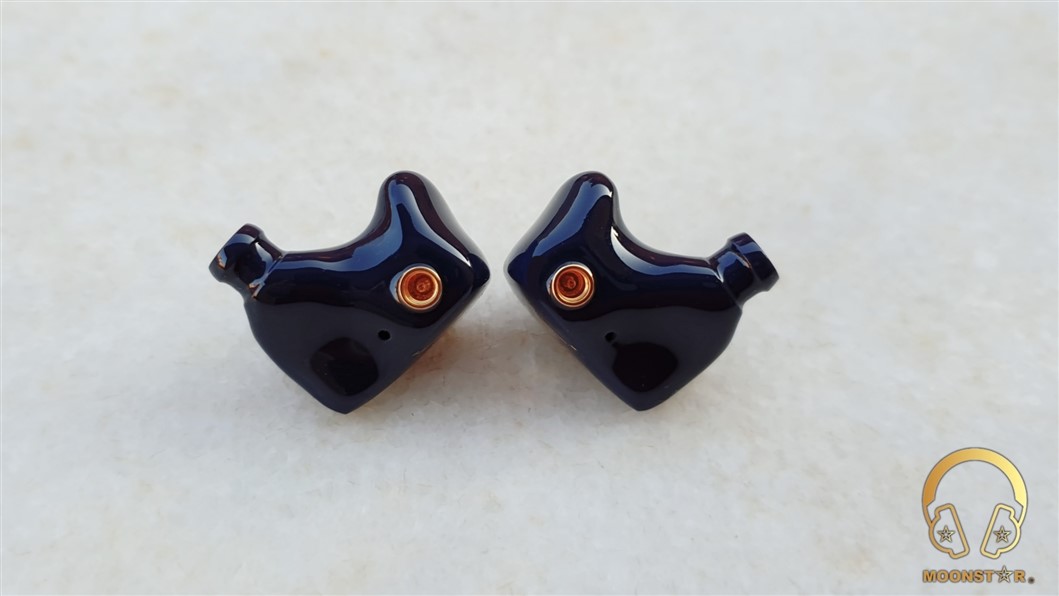 The overall build quality of the monitor is top notch!

The ISN Audio D10 comes with the S4 detachable cable that is also sold separately. The S4 is a 63 Cores 4 Strand cable made of OCC Sliver-plated copper wire. The cable features MMCX male connectors. 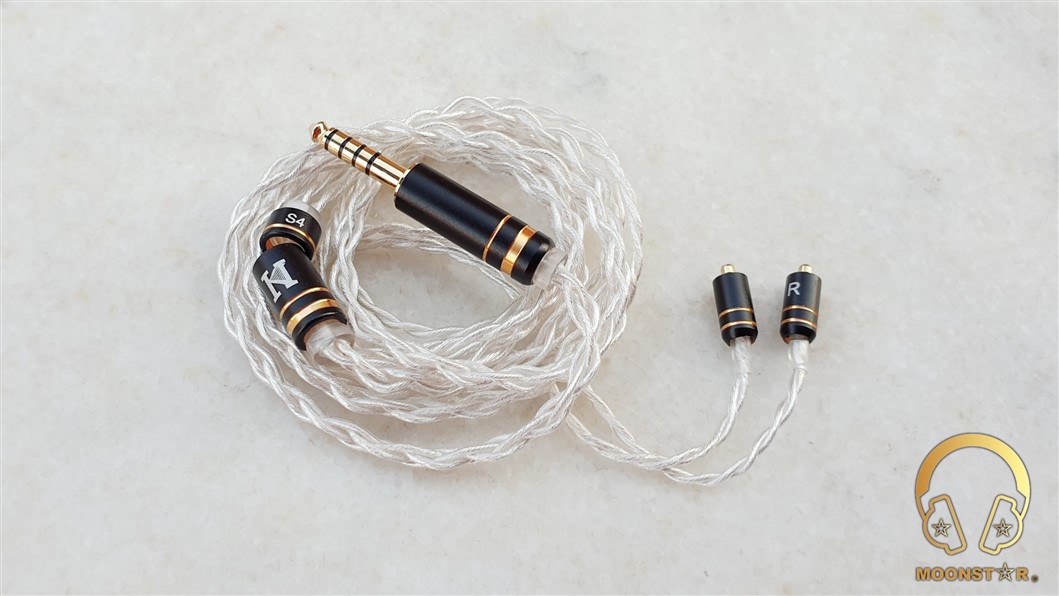 The MMCX connectors have a metal housing in black color with L & R markings and two rings on each connector in gold color which gives the S4 a nice stylish look. 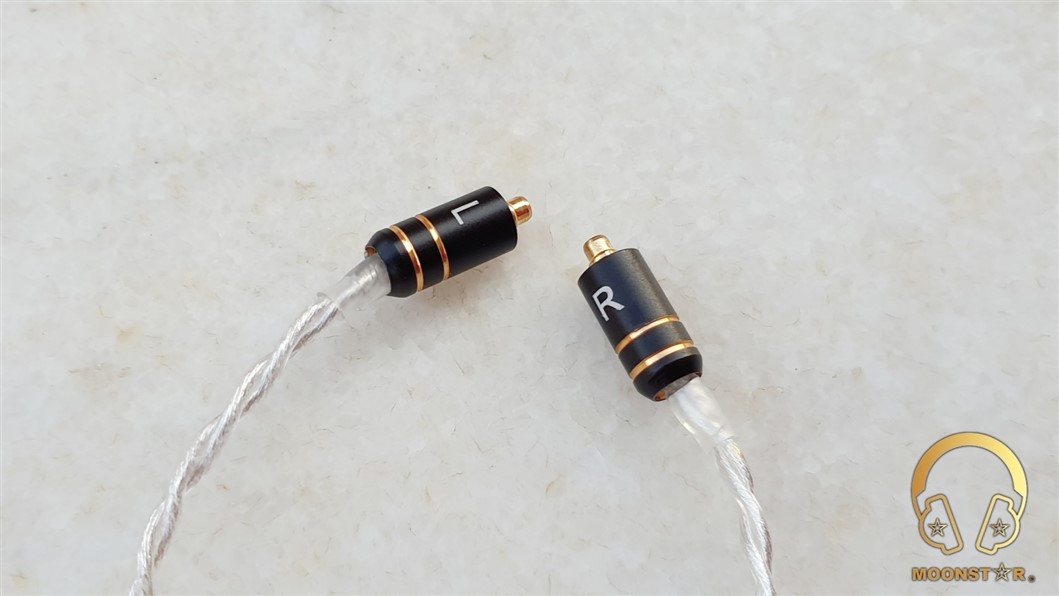 The cable has a soft TPU coating and features a metal Y-splitter and a metal chin slider in the same black color. 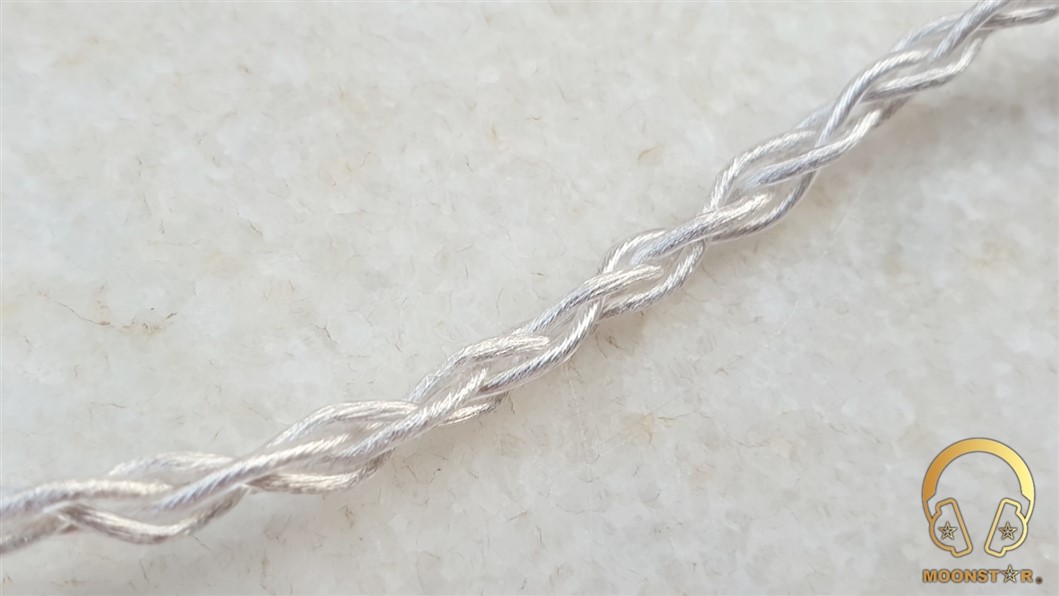 The Y-splitter sports the ISN Brand logo and two gold rings/circles while the chin slider shows the S4 branding and has one gold ring. 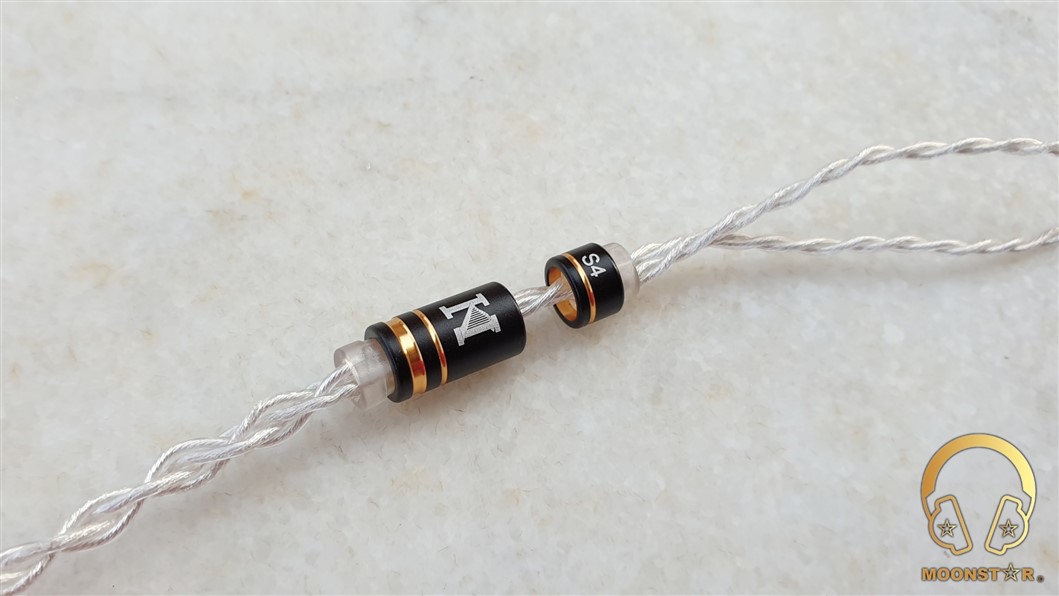 The S4 has a straight profiled headphone jack which is available in 3.5mm TRS unbalanced and 2.5mm TTRS or 4.4mm TRRRS (pentaconn) balanced variants. The housing of the headphone jack is made of metal in black color and features the same gold colored rings that we have seen on the other metal part of the S4. 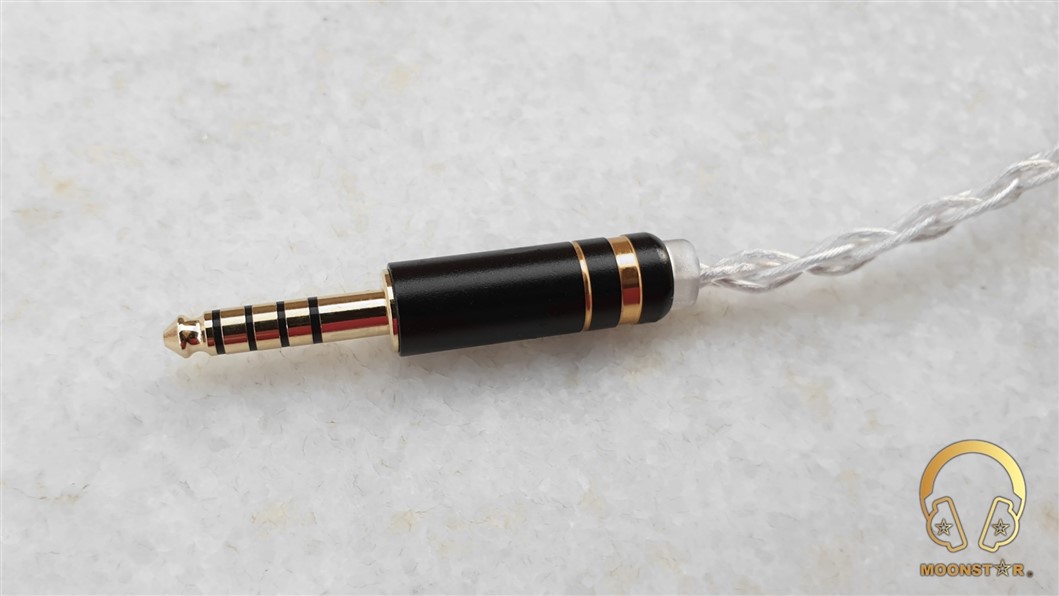 The S4 can be purchased separately under the link below which is also available with the 2-Pin connector variant.

The monitor shell of the ISN Audio D10 has an average size and fits perfectly in to my ears. It offers a pretty good isolation for an In-Ear Monitor with a universal shell and is comfortable to wear for longer listening periods without to hurt my ear especially the area that is called as ear concha.

The ISN Audio D10 is a very easy to drive IEM with a impedance of 16Ω and a sensitivity of 100dB which makes it compatible with relative weak sources like Smartphone’s, Tablet’s and DAP’s with low amplification.

The ISN Audio D10 shows a V-shaped sound signature and is focus on the top and low end, while the general tonality is slightly warmer than neutral. The bass is strong, impactful and pretty fast, the treble range is airy and highlighted, while the midrange is fairly clear but a bit recessed.

PS: The ISN Audio D10 needs a burn-in for approx. 120 – 150  hours to shows its true potential and to tame the upper midrange and treble region.

One of the focal points of the ISN Audio D10 is the lower frequency region that is punchy and energetic, which gives the overall presentation a pretty dynamic character.

The subbass of the D10 is more highlighted than the midbass region and shows a good level of depth, rumble and extension especially for a relative small 9mm diameter dynamic driver. The subbass tuning is ideal for genres like pop, electronic, rnb etc. while it doesn’t sounds overdone.

The midbass on the other hand is slightly less pronounced compared to the subbass region and shows a punchy, dynamic and full bodied character. Instruments like cross drums do sound accentuated; snare drums are slightly bassy and pretty fast, while bass guitars have a warmish and full bodied tonality.

The bass of the ISN Audio D10 is in general fairly fast, tight and controlled and will satisfy from trance, pop and rnb music up to faster genres like metal music. 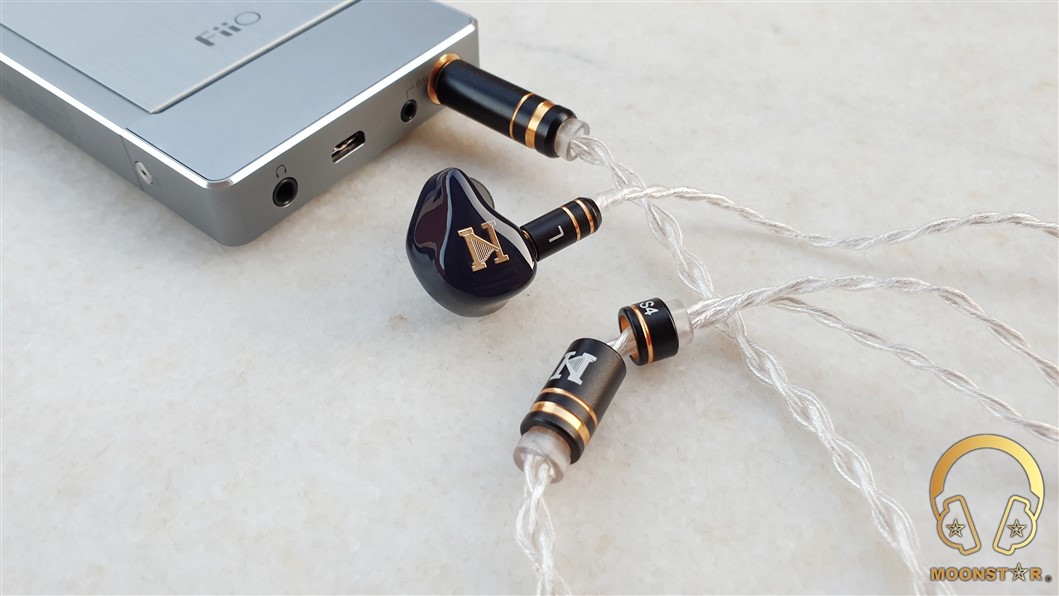 The detail retrieval of the midrange is pretty good, while the general presentation of this region is clean, spacious and pretty transparent.

The vocal performance of the ISN Audio D10 is in general successful. Male vocals such as B. B. King or Eric Clapton are musical and pretty clear, while female vocals like Laura Pergolizzi or Hannah Reid are transparent and lively. Female vocals are slightly more successful due to the upper midrange character.

The instrument tonality of the ISN Audio D10 is slightly warmer than neutral and do show a vivid and clean presentation. Instruments like pianos are slightly bright, pounced and lively, while guitars are transparent and pretty musical.

The upper midrange of the ISN Audio D10 is strongly highlighted and gives the overall presentation a crisp and lively character. The upper midrange is more forward positioned than the treble range and sounds also more detailed. The transitions are in general fairly soft and controlled without to show remarkable drawbacks such as lack of extension.

The treble range of the ISN Audio D10 is focused to the lower treble which means that there is a slightly roll-off in the treble range after a peak around the 5 kHz region. The lower treble region (presence) is more detailed compared to the upper treble (brilliance). The treble range needs at least a burn-in period of 150 hours to show its true potential, which was a bit sharp at the very beginning of my first contact with the D10.

Instruments like hi-hat’s and cymbals in genres like jazz or metal music are pretty highlighted and do show a good level of extension for an In-Ear Monitor at this price category.

The soundstage performance of the ISN Audio D10 is pretty good for an In-Ear Monitor at this price range and is successful in terms of instrument/vocals placement and separation. The soundstage shows a nice amount of air and has an above average wideness. The soundstage depth on the other hand is on an average level.

The subbass region of the ISN Audio D10 shows more rumble/ quantity compared to the Campfire Audio Comet and is also is superior in terms of depth and extension. The midbass region of the Comet is slightly more highlighted and shops a tad more impact. The ISN D10 has the upper hand in terms of bass speed and control.

The mirdange of the ISN Audio D10 has a brighter tonality with better level of airiness and clarity, while the Campfire Audio Comet shows a slightly warmer tonality and a tad more fullness which makes it a tad more emotional compared to the ISN D10.

The lower midrange character makes the Comet slightly more successful with male vocals, while the ISN Audio D10 is superior in terms of female vocal performance. Instruments like violins and cymbals are more detailed with the D10, while I prefer the Comet for violas and the contrabass. The upper midrange of both the CA Comet and of the ISN D10 is highlighted with a boost that is noticeable around the 3 kHz region.

The soundstage of the ISN Audio D10 has the upper hand in terms of soundstage wideness, while the depth of the stage is nearly identical with both In-Ear Monitors. 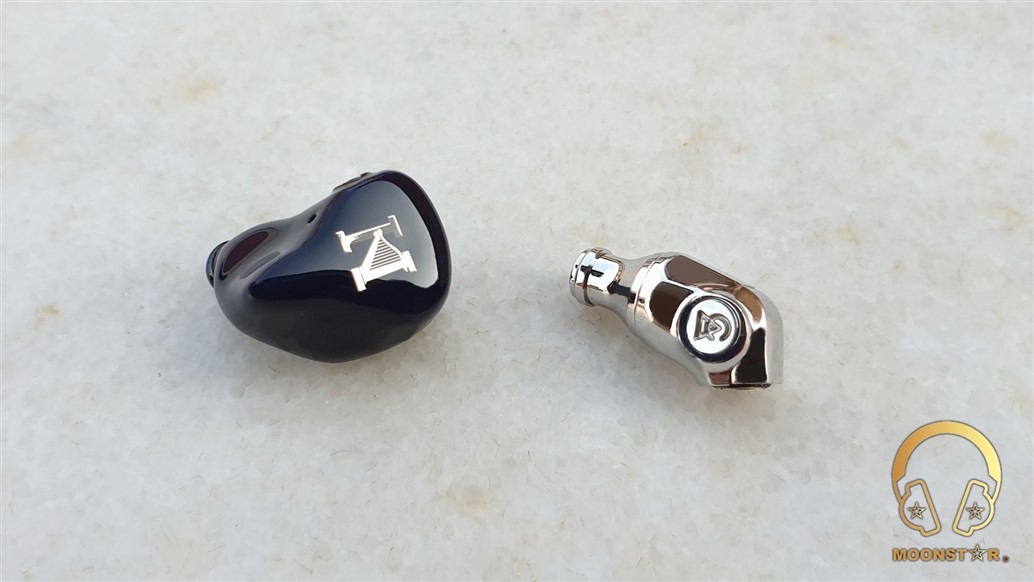 The most noticeable difference when you swipe from the ISN Audio D10 to the Final Audio E5000 is the drivability. The D10 is a much more efficient IEM compared to the E5000 which needs a more powerful source to shows shine.

The midbass region of both IEM’s shows also similarities when it comes to impact and extension, while the ISN Audio D10 has a slightly advantage in terms of control and tightness.

The midrange of the ISN Audio has a slightly brighter tonality and has the upper hand in terms of transparency and airiness compared the Final Audio E5000 because of the more pronounced upper midrange character. Male colas do sound slightly fuller and warmer with the E5000, while the ISN Audio D10 is superior in terms of detail retrieval and clarity of female vocals.

The stage of the ISN Audio D10 is slightly more expansive and shows a better level of airiness and separation. The soundstage of the ISN D10 shows better depth compared to the Final Audio E5000, while the E5000 has the upper hand in terms of depth. 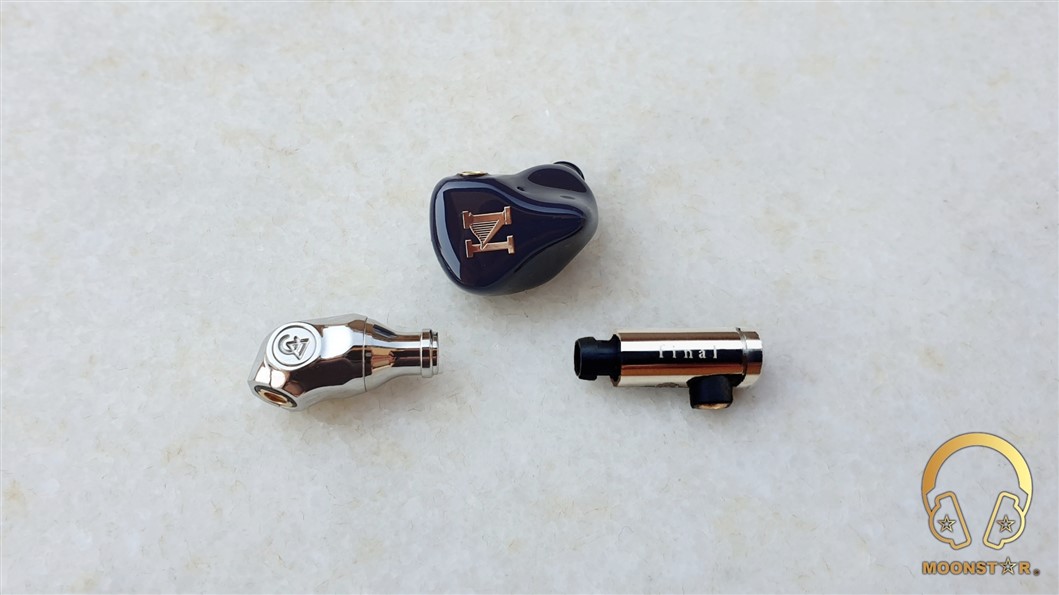 ISN Audio offers with the D10 IEM a highly engaging presentation thanks to its great bass performance, good detail retrieval and overall level of clarity and airiness. This sound is packed in to a very comfortable and stylish looking monitor which comes with lots of accessories and the ISN S4 upgrade cable that is available with single ended and balanced headphone plug options.