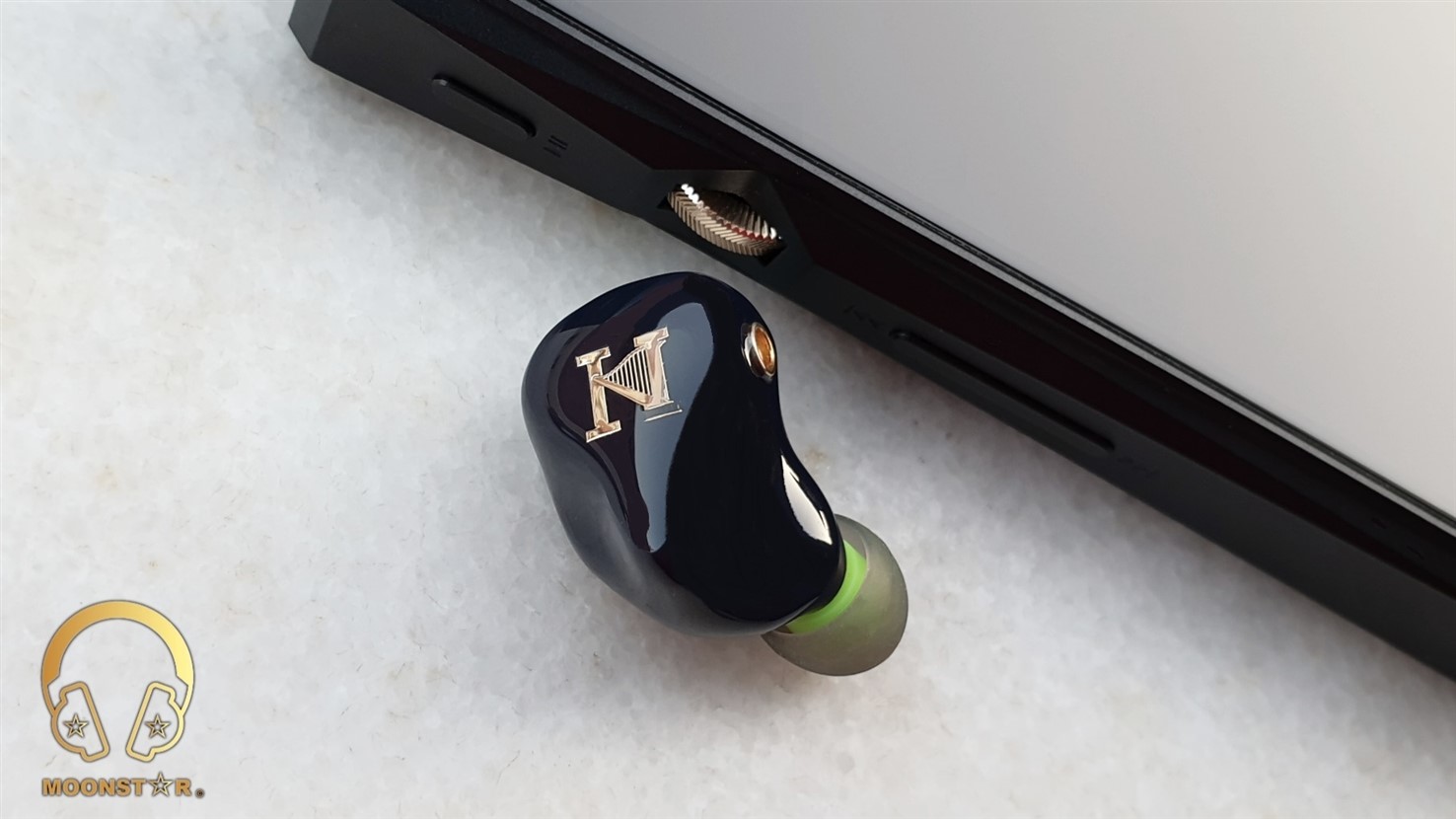 ISN Audio is a relative new Chinese brand that is producing portable audio gears like Earbuds, In-Ear Monitors and Cables. The ISN H40 is an In-Ear Monitor with a Hybrid Driver Configuration which features 3 x Balanced Armature Drivers + 1 x Dynamic Driver with a diameter of 9.2mm.

I would like to thank ISN Audio for providing me the H40 IEM sample via Penon Audio for review purposes. I am not affiliated with ISN Audio and Penon Audio beyond this review and these words reflect my true and unaltered opinions about the product.

The ISN Audio H40 is available on Penon Audio for 195,00 USD under the link below:

The ISN Audio H40 is coming in a small rectangular box that is wrapped with a cardboard which shows the illustration and some brandings of the H40 In-Ear Monitor. 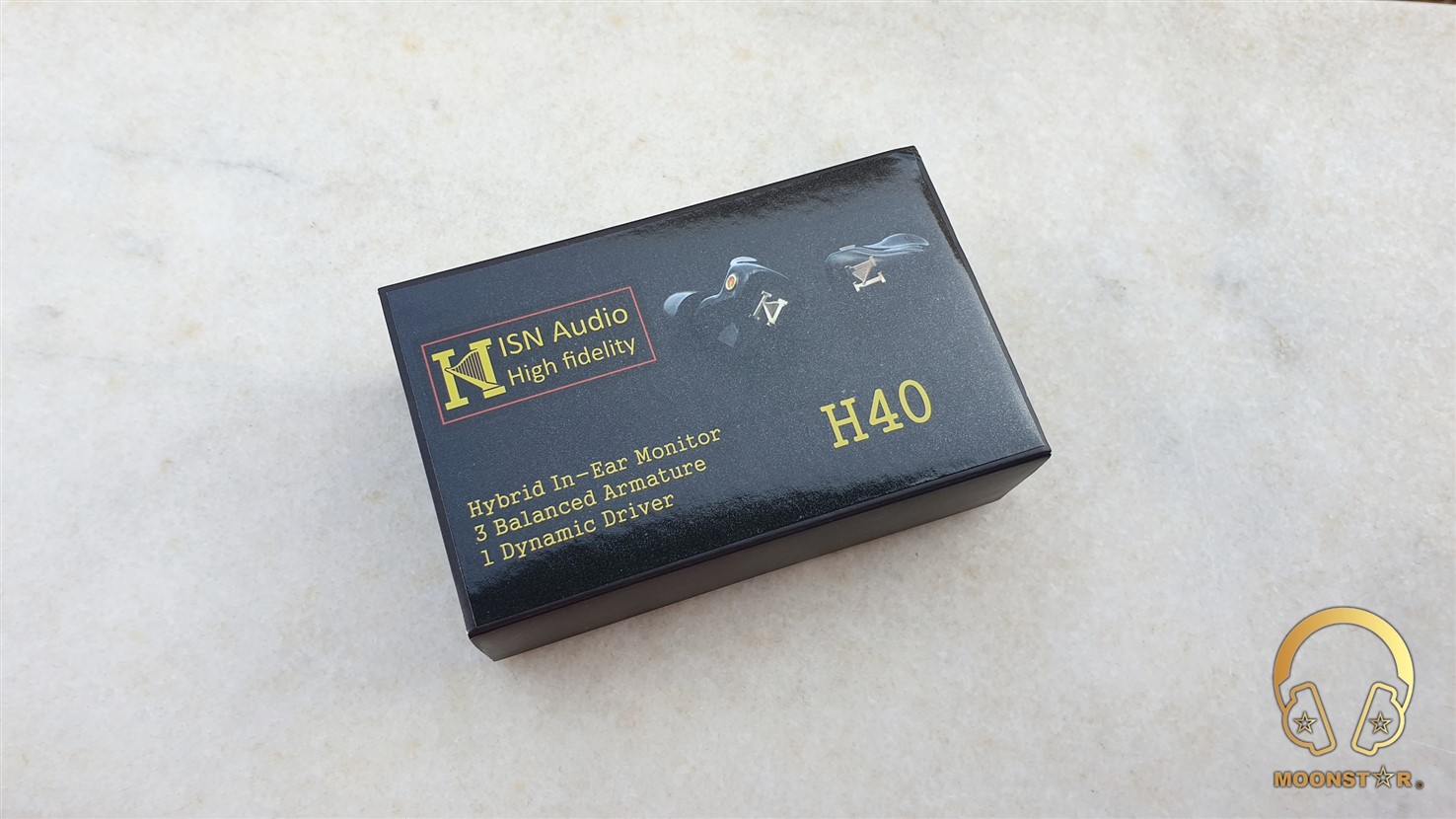 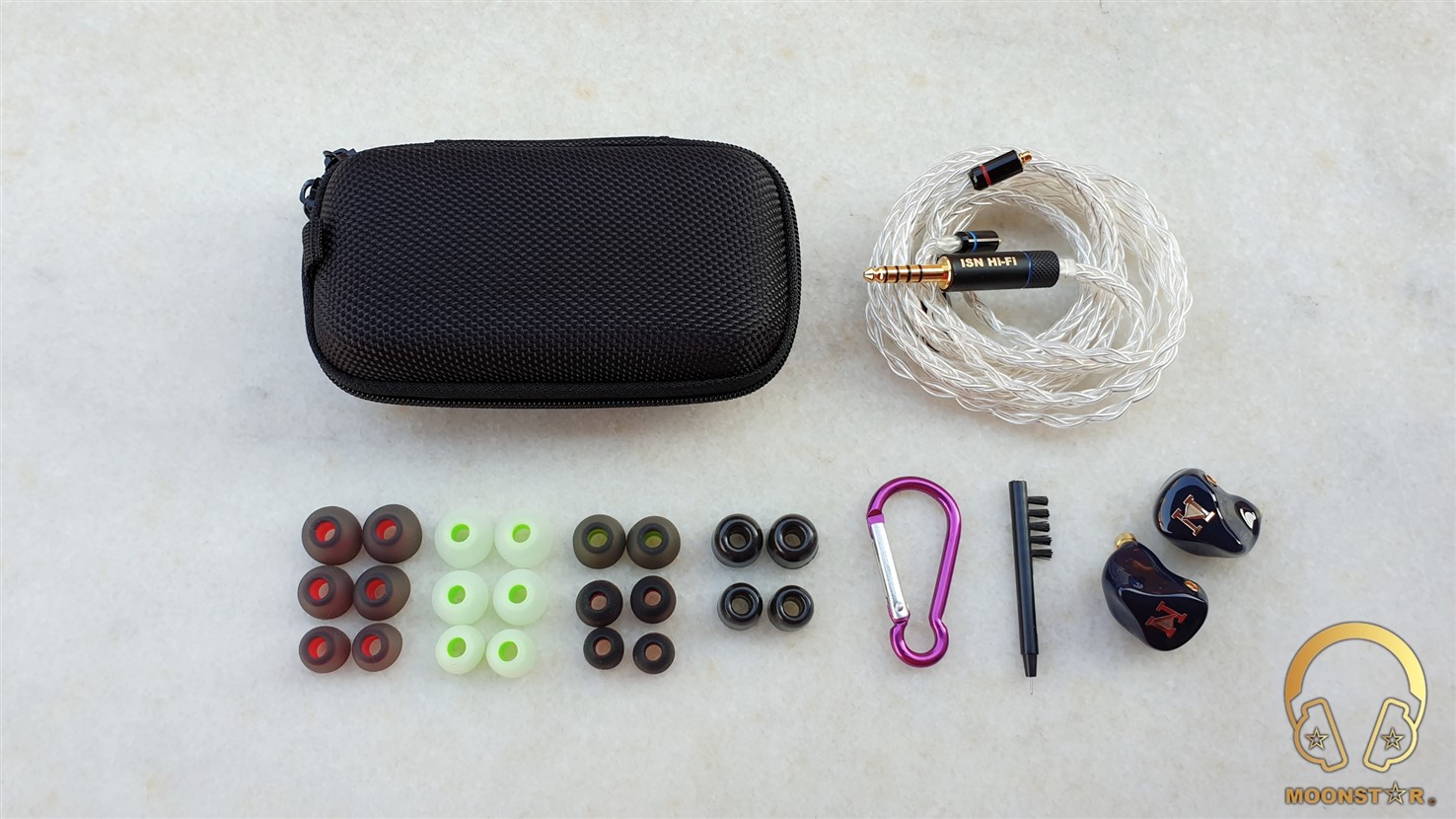 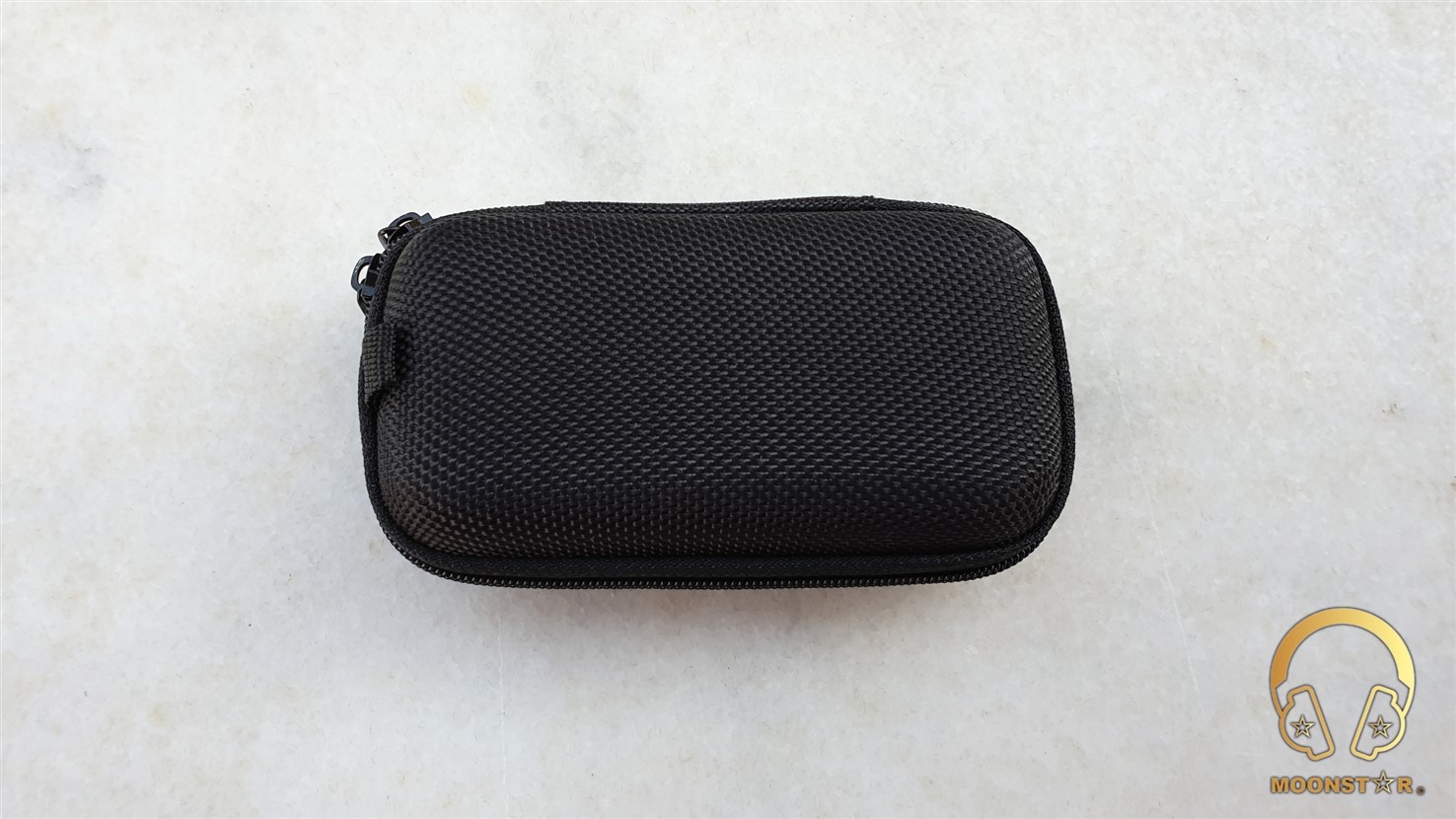 The ISN Audio H40 is an In-Ear Monitor with a 3 + 1 Hybrid driver configuration. The monitor shell of the H40 has a nice semi-custom acrylic shell in dark purple (purple-black) with a glossy finish. 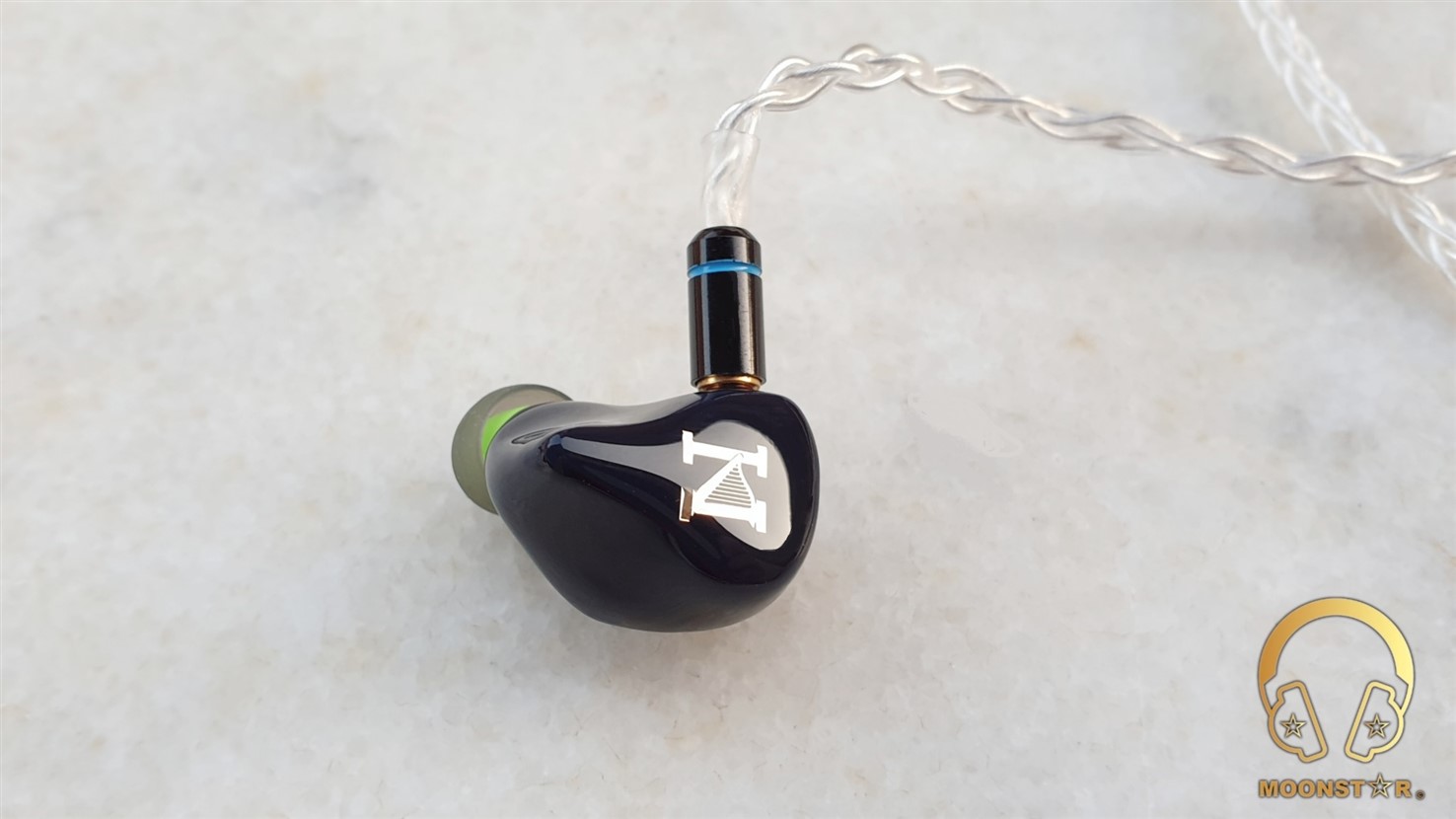 The faceplate of the monitor shell features the ISN Audio brand logo which is inspired by a harp instrument in golden color.

On rear side of the monitor shell is sound nozzle and the surface which fits to your ear concha thanks to semi-custom shaping. 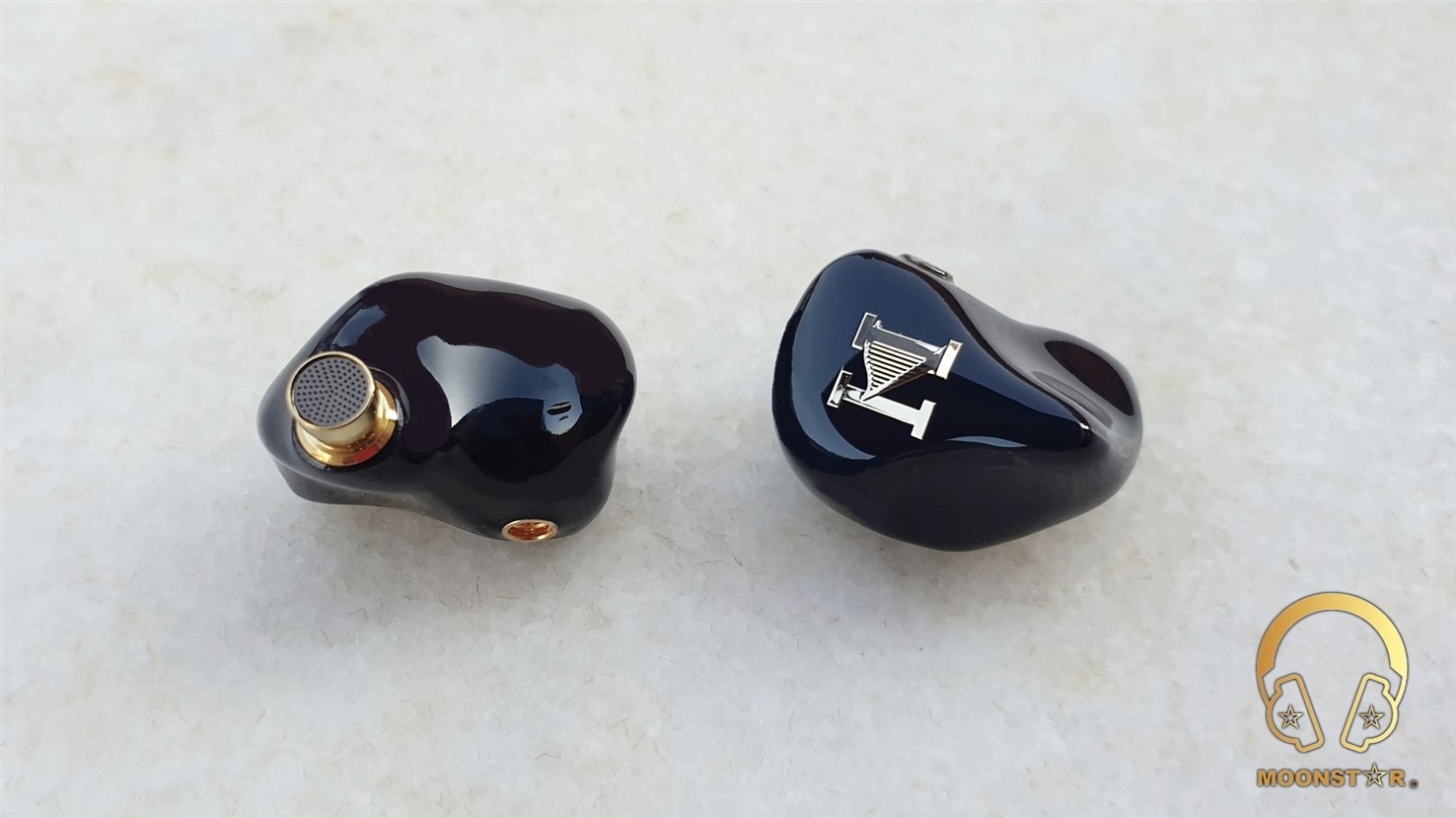 The sound nozzle is made of metal material in gold color which has a small lip to hold de ear-tips and a fine metal mesh on the top to prevent the insertion of dust and earwax inside the monitor. 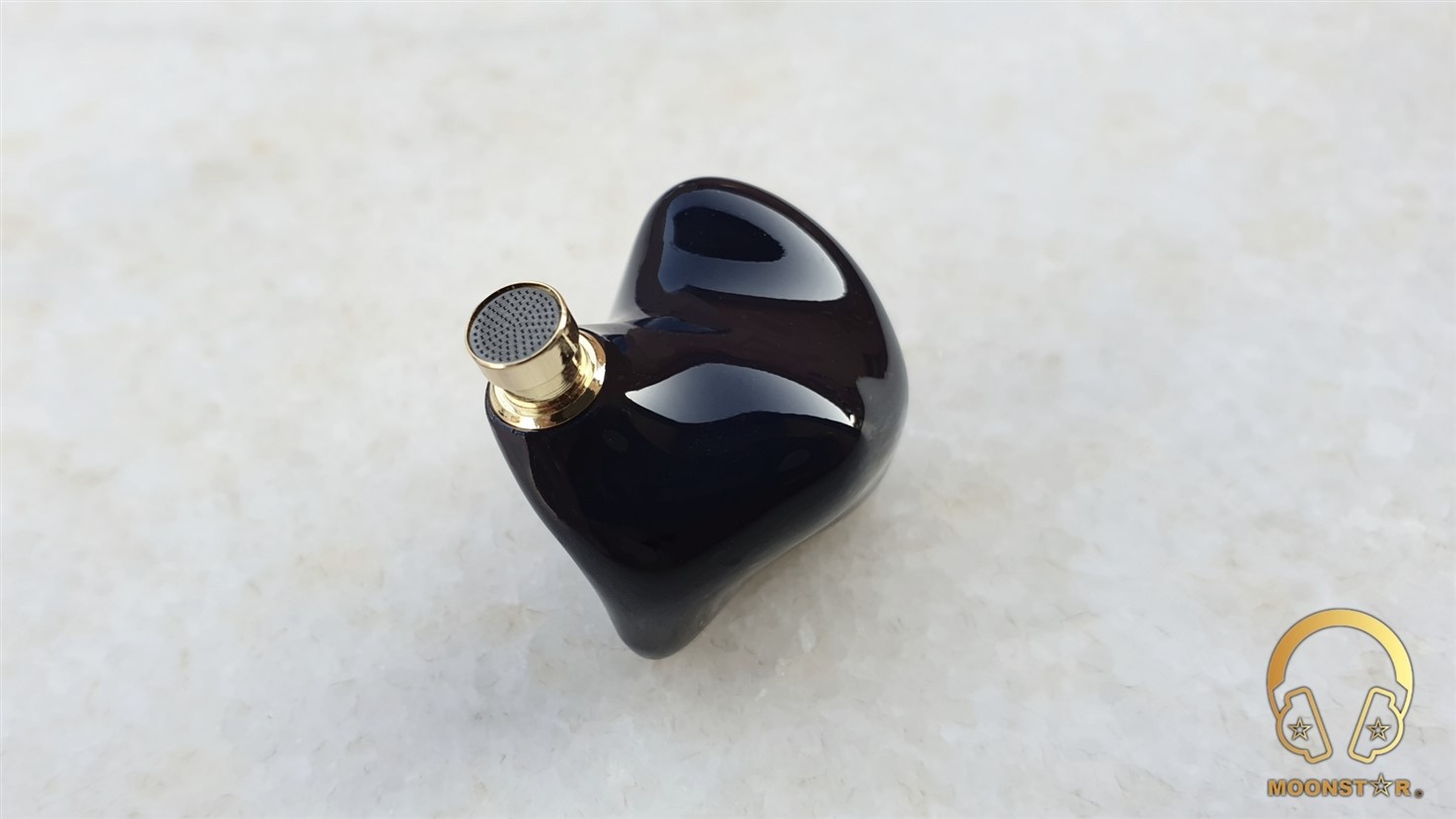 At the backside of the H40 monitor shell is a bass vent for the 9.2mm diameter dynamic driver. 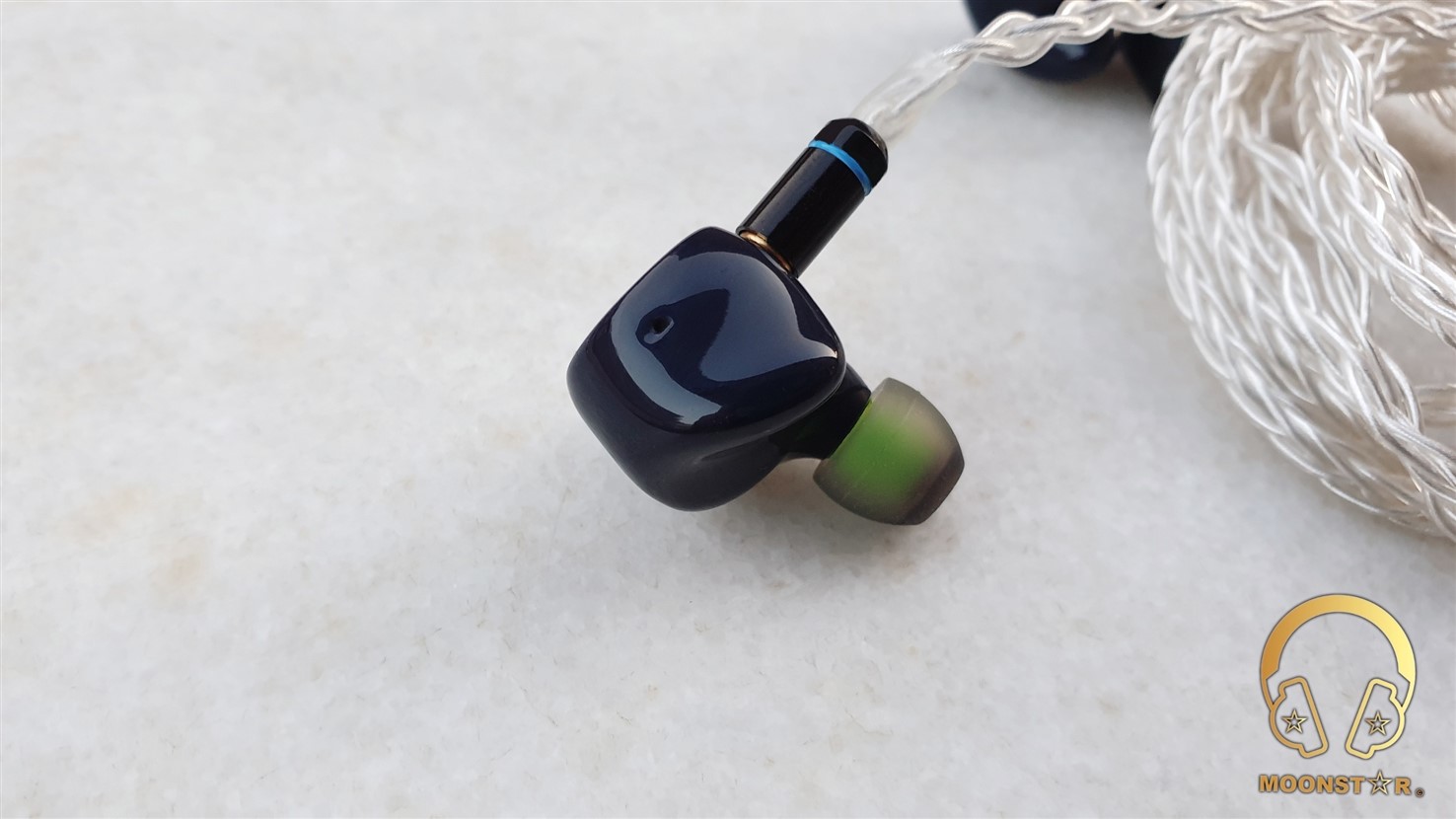 On the top of the housing is the MMCX (Micro Miniature Coaxial) female connector which offers a pretty secure and tight connection with the male connector of the detachable cable. 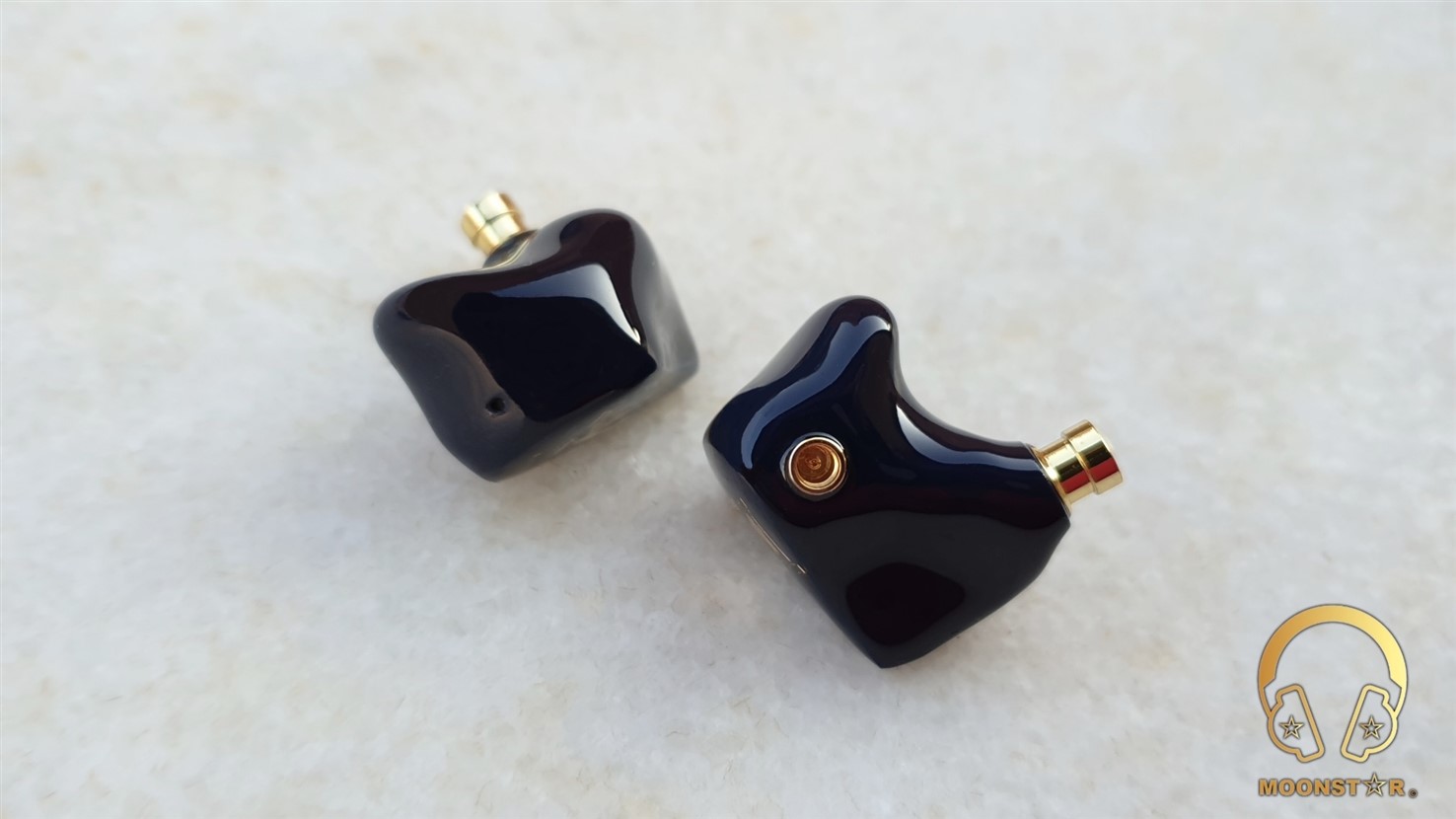 The ISN Audio H40 IEM is coming with a detachable cable that features MMCX connectors. 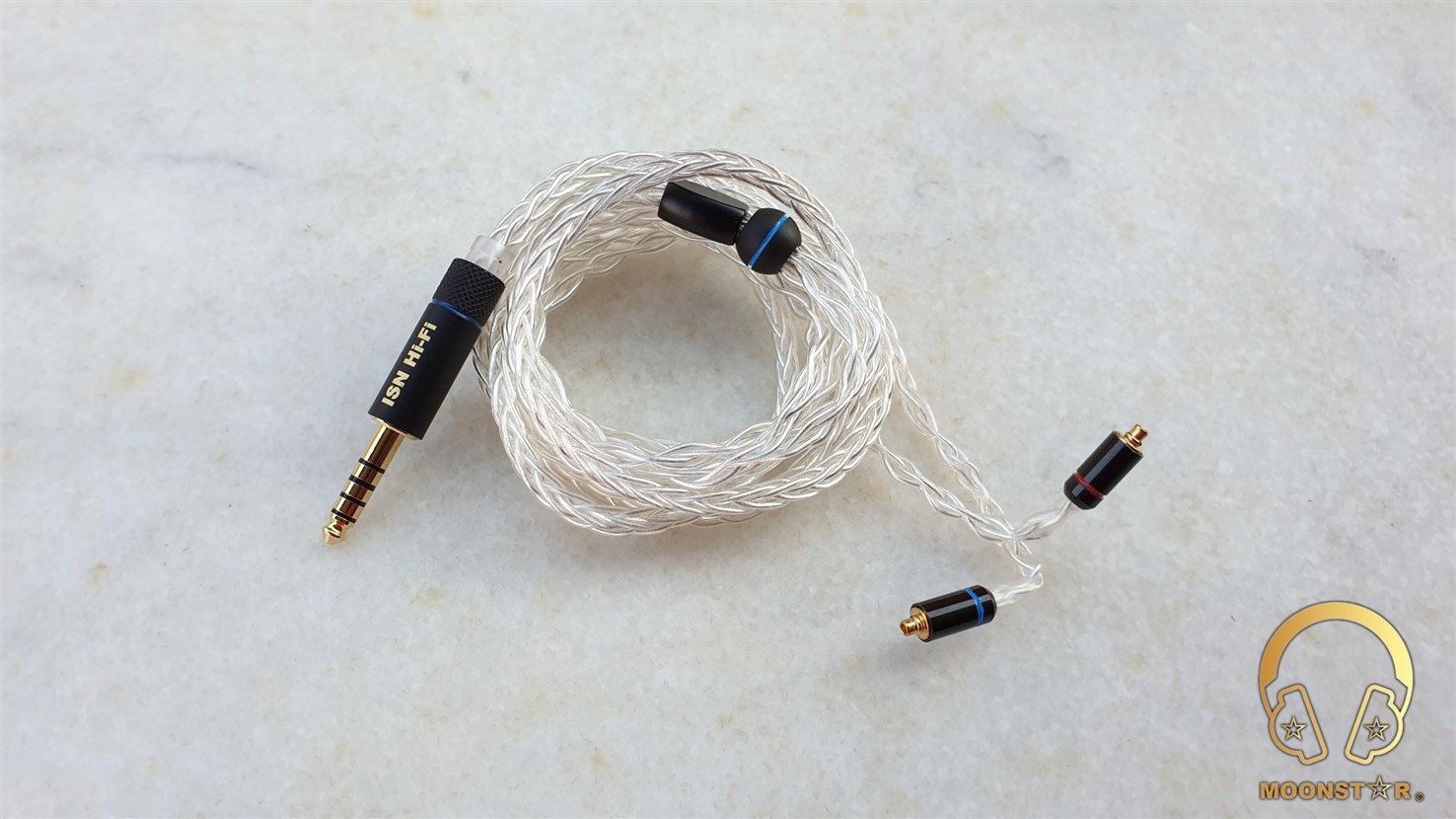 The MMCX connectors have a metal housing in black color with Left (blue) & Right (red) indicators. 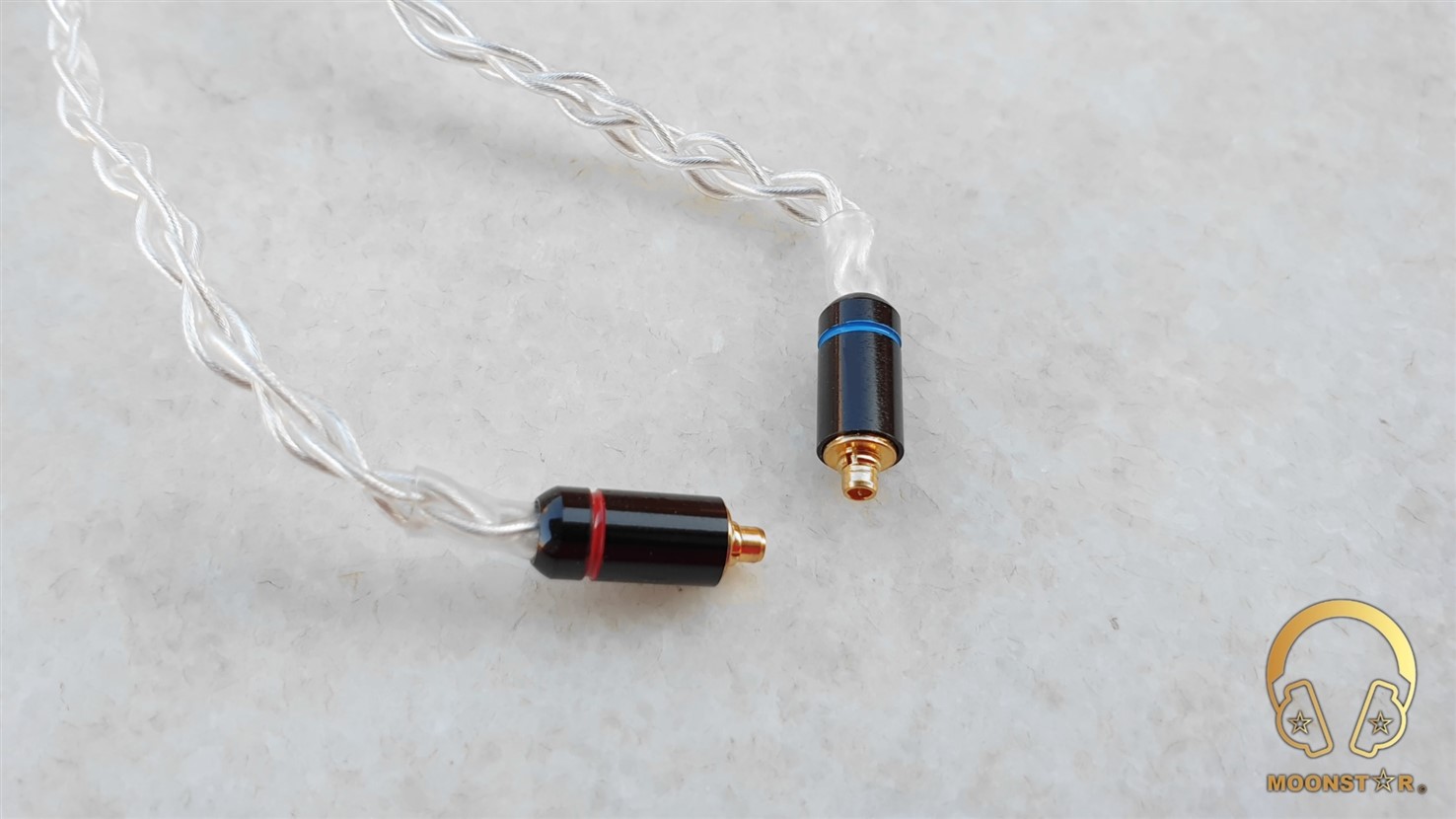 The cable is has a soft TPU coating and features a Y-splitter and a chin slider in black color. 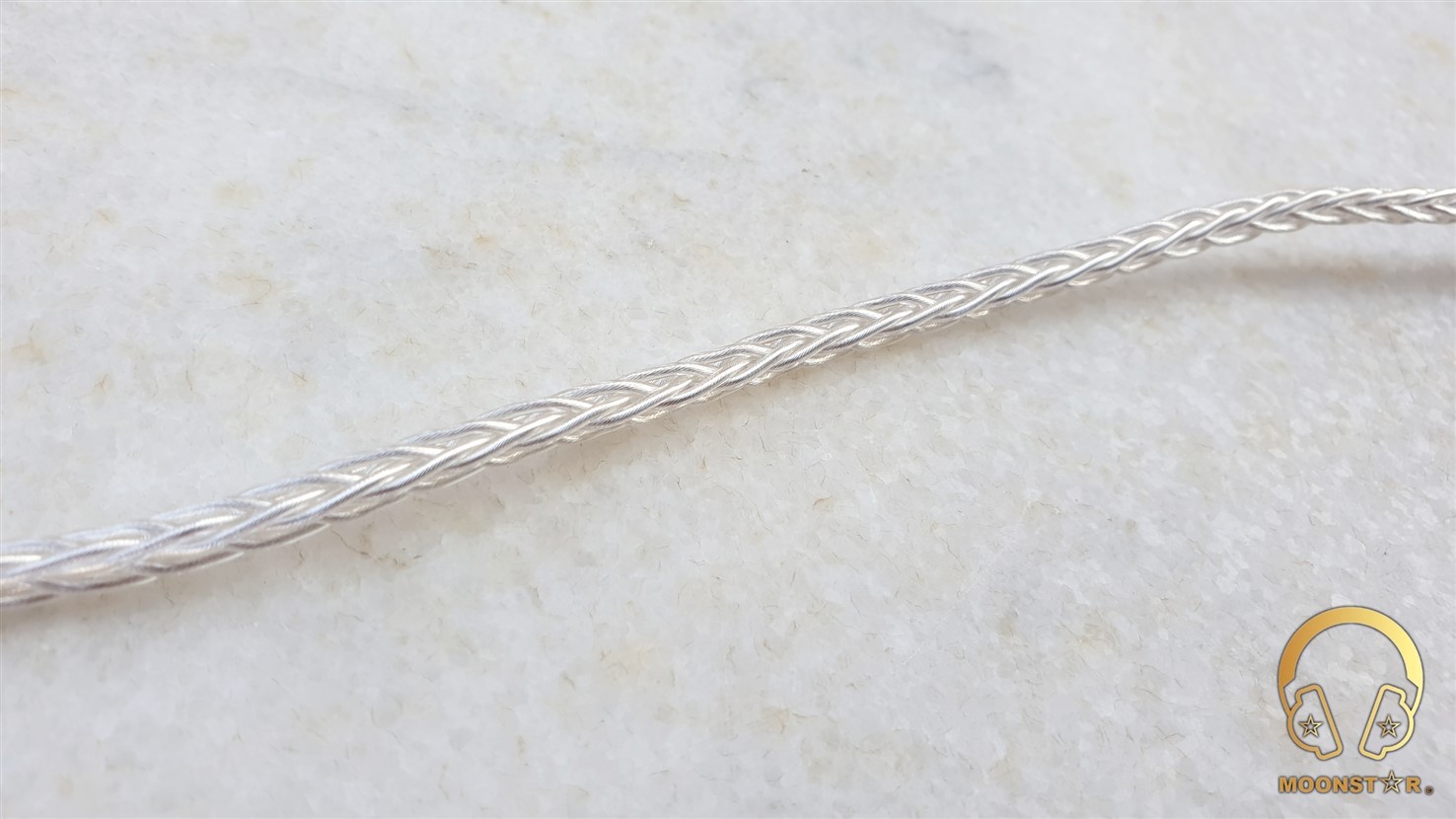 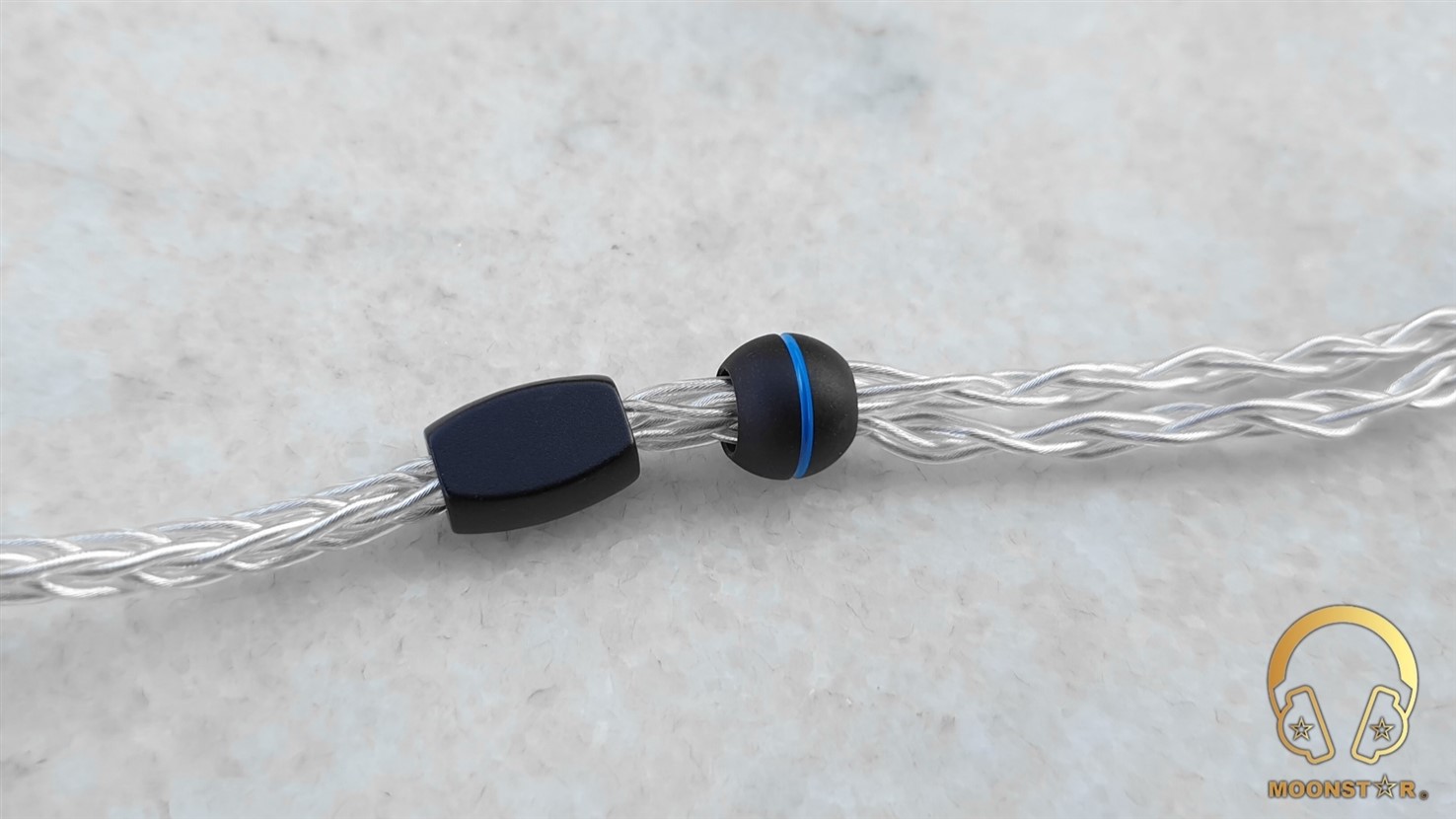 The cable of the H40 has a straight profiled headphone jack which is available in 3.5mm TRS unbalanced and 2.5mm TTRS or 4.4mm TRRRS (Pentaconn) balanced variants. The housing of the headphone jack is made of metal in black color and features the ISN Hi-Fi brand logo in gold color. 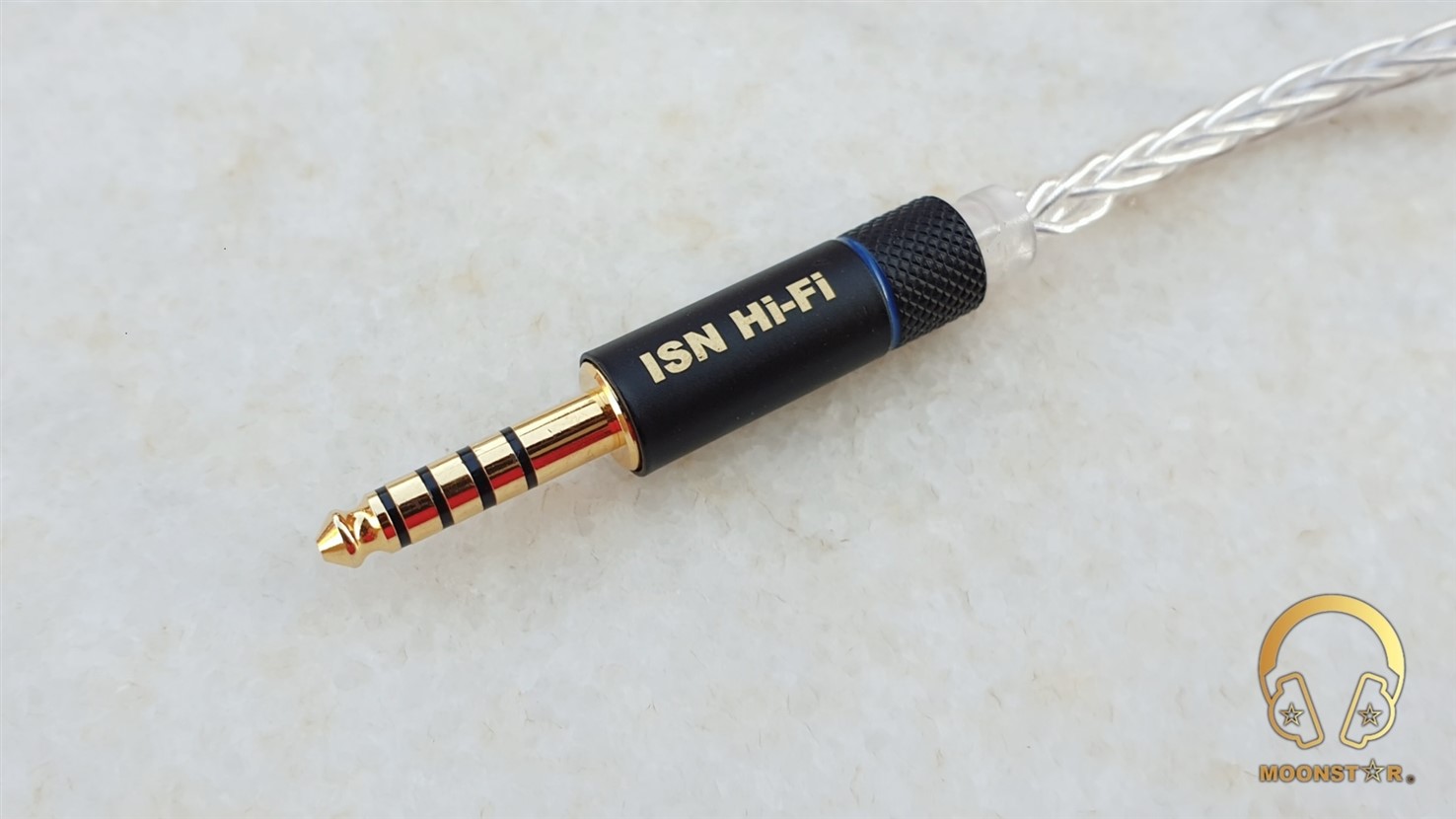 The overall build quality of the monitor and the detachable is of high quality!

The monitor shell of the ISN Audio H40 has an above average size and fits perfectly in to my ears. It offers a pretty good isolation for an In-Ear Monitor with a universal shell and is comfortable to wear for longer listening periods without to hurt my ear especially the area that is called as ear concha.

The ISN Audio H40 is a pretty easy to drive In-Ear Monitor with a impedance of 22Ω and a sensitivity of 105dB which makes it compatible with relative weak sources like Smartphone’s, Tablet’s and DAP’s with low amplification. 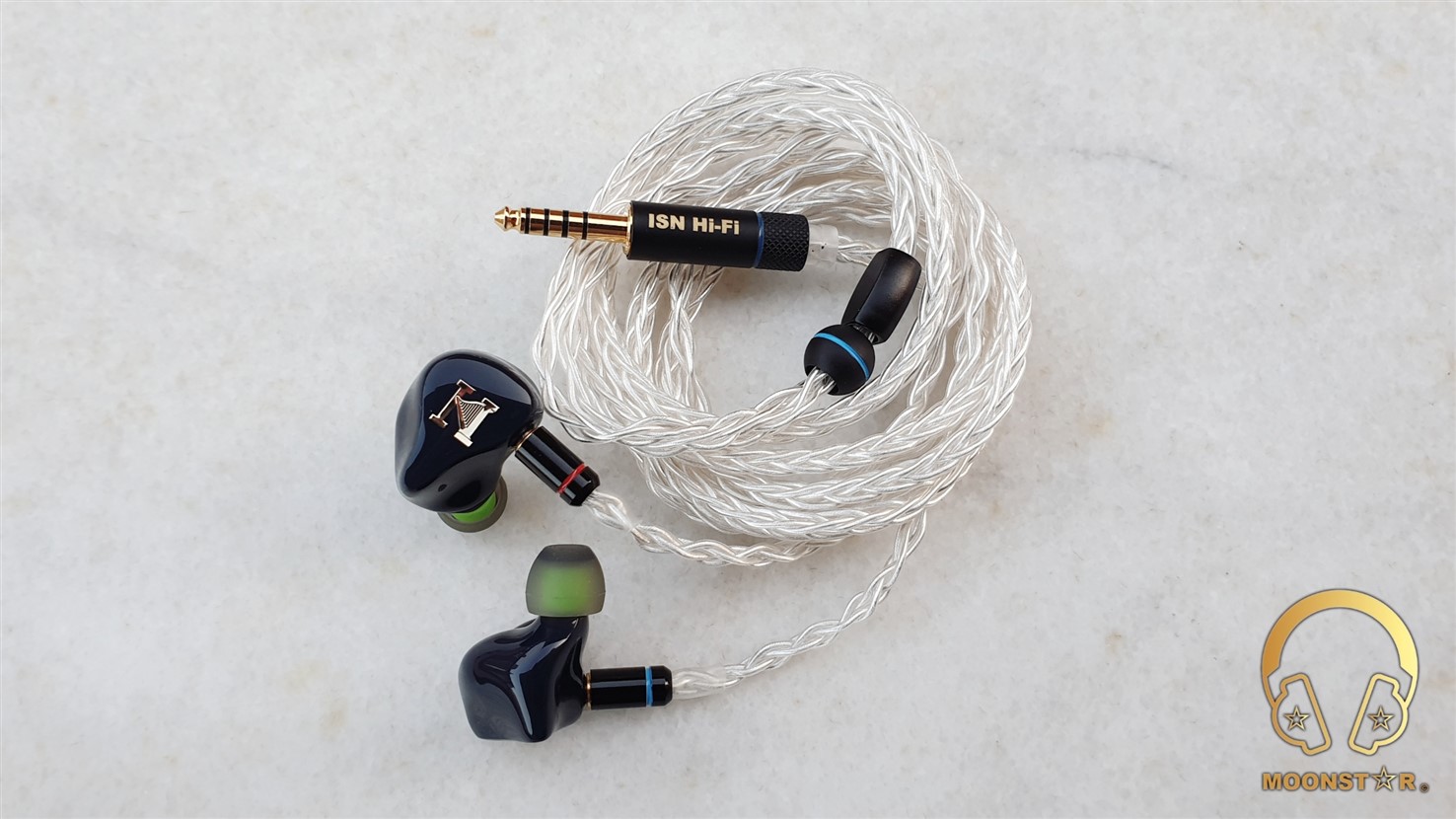 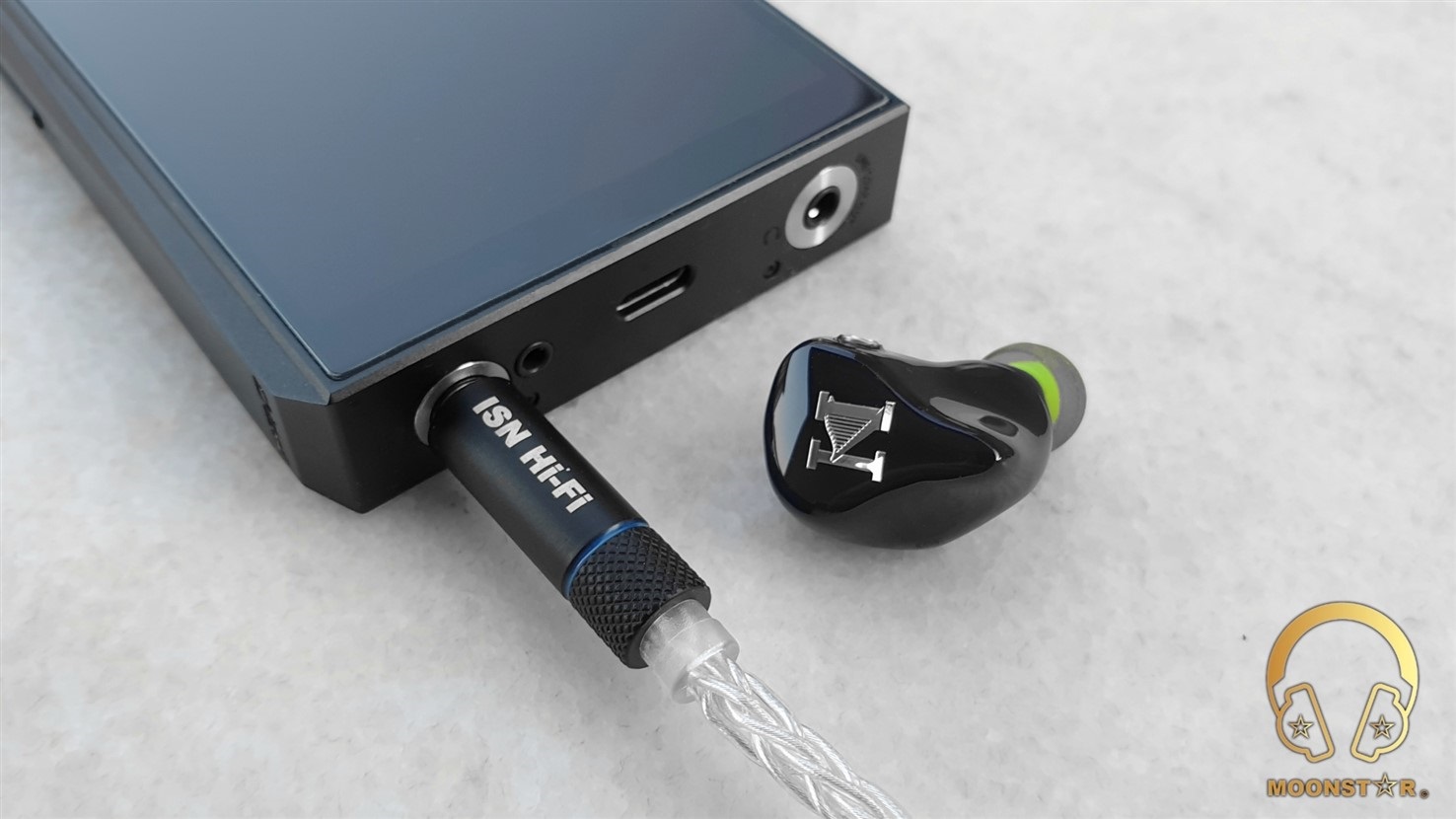 The ISN Audio H40 shows a mildly V shaped sound signature with a warmish tonality. The bass of the H40 sounds deep, full bodied and powerful, the midrange is clear, detailed and musical, while the treble area is slightly bright but not sharp and do show a good level of extension.

The ISN Audio H40 truly shines with it comes to the low end performance with its powerful, pretty fast and well textured bass that shows also a good level of authority for a product at this price range.

The subbass of the H40 reaches pretty low, shows an impressive rumble that will satisfy with many genres such like epic music, electronic, pop up to metal music. The general tonality of tonality is warm and soft without to make the general presentation dull or veiled.

The ISN Audio H40 was very successful in songs with deep subbass notes like Audiomachine’s “Legends of Destiny” or Massive Attack’s “Angel”.

The midbass region of the ISN Audio H40 shows has less intensity and quantity compared to the subbass range and is in general fast and tight in its presentation.

The midbass area is fairly pronounced, from instruments like the cross drum, up to the trumpets and makes the general presentation of the H40 musical and entertaining. The ISN Audio H40 was quite successfully complex bass passages such like Gogo Penguin’s “Raven, or Photek’s “The Hidden Camera”.

Other instruments such like acoustic guitars or the contrabass do sound warm, musical and have a good level of midbass depth.

The general bass performance of the relative small 9.2mm diameter Dynamic Driver is quite impressive especially compared to many other IEM’s in the same price range that I have listen before. 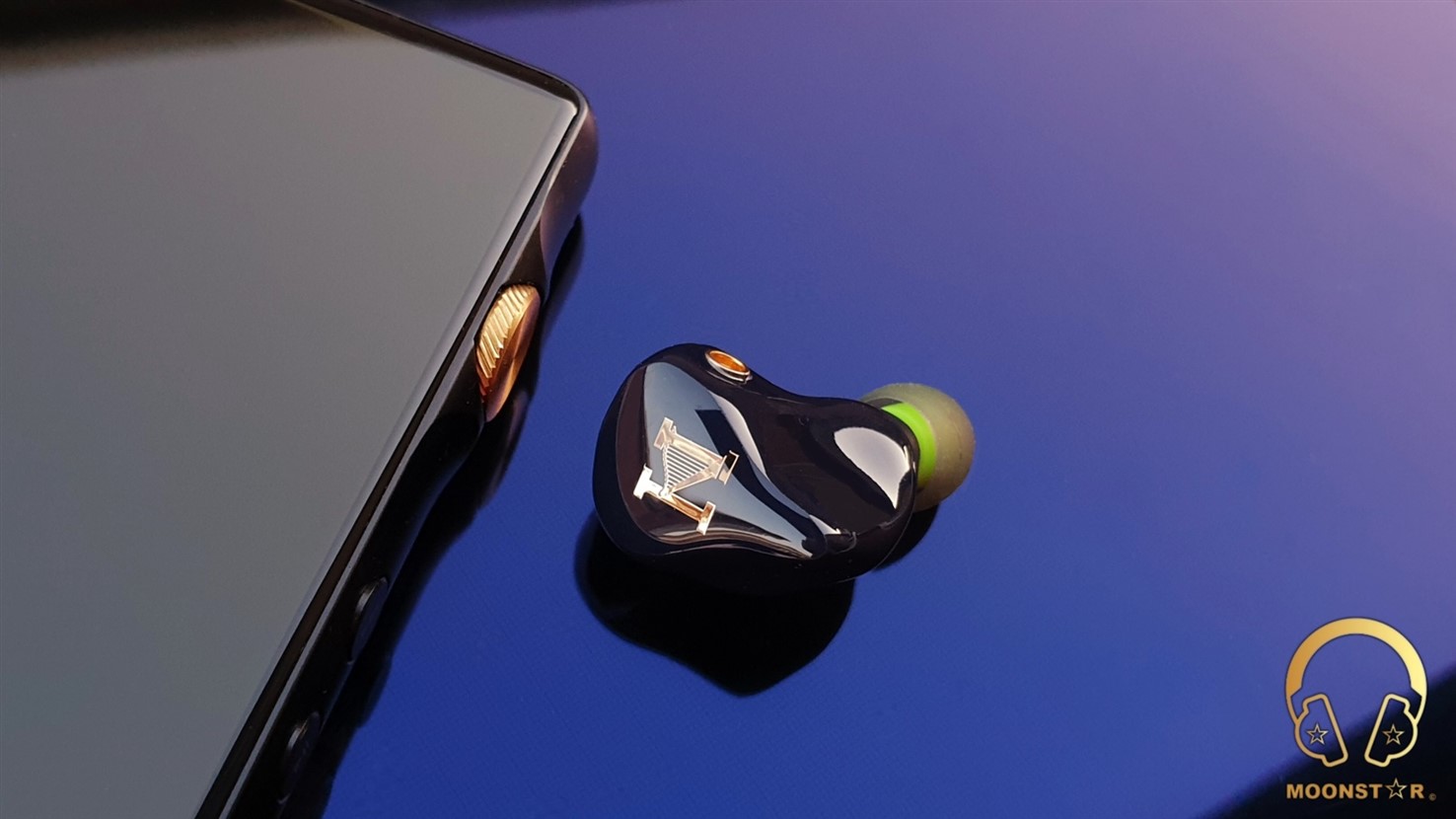 The mildly V shaped sound signature of the ISN Audio H40 offers a midrange presentation that has a warmish, musical and lush character. There are no negative conditions such as sibilance or harshness, while the level of airiness and clarity is on a successful level.

The ISN Audio H40 is successful with male and female vocals, while the vocals do come from the front and the instruments are slightly behind them which shows that the engineers of ISN Audio have tuned the H40 successful in terms of vocal and instrument separation.

The ISN Audio H40 is petty successful in terms of lower midrange depth and tonality. The tonality is warm and slightly thick which makes the male vocal presentation quite pleasant to listen to. Male do have a good level of depth and fullness with fairly good amount of detail retrieval.

Female vocals do sound fairly transparent and airy, without to be sibilant or muddy, while they have also the slightly edge in terms of detail retrieval and realism co pared to male vocals. It is very enjoyable to listen to female vocals because of the sibilance and fatigue-free presentation.

The instrument tonality of the ISN Audio H40 is warmer than neutral, musical and silky smooth. Instruments such like acoustic guitars are bassy and do have warmish tonality, while violins are fairly bright but fatigue-free and violas do sound pretty emotional. Since the upper midrange is pronounced, it is possible to hear details and extensions from violin to flute, from female vocal to the pianos. 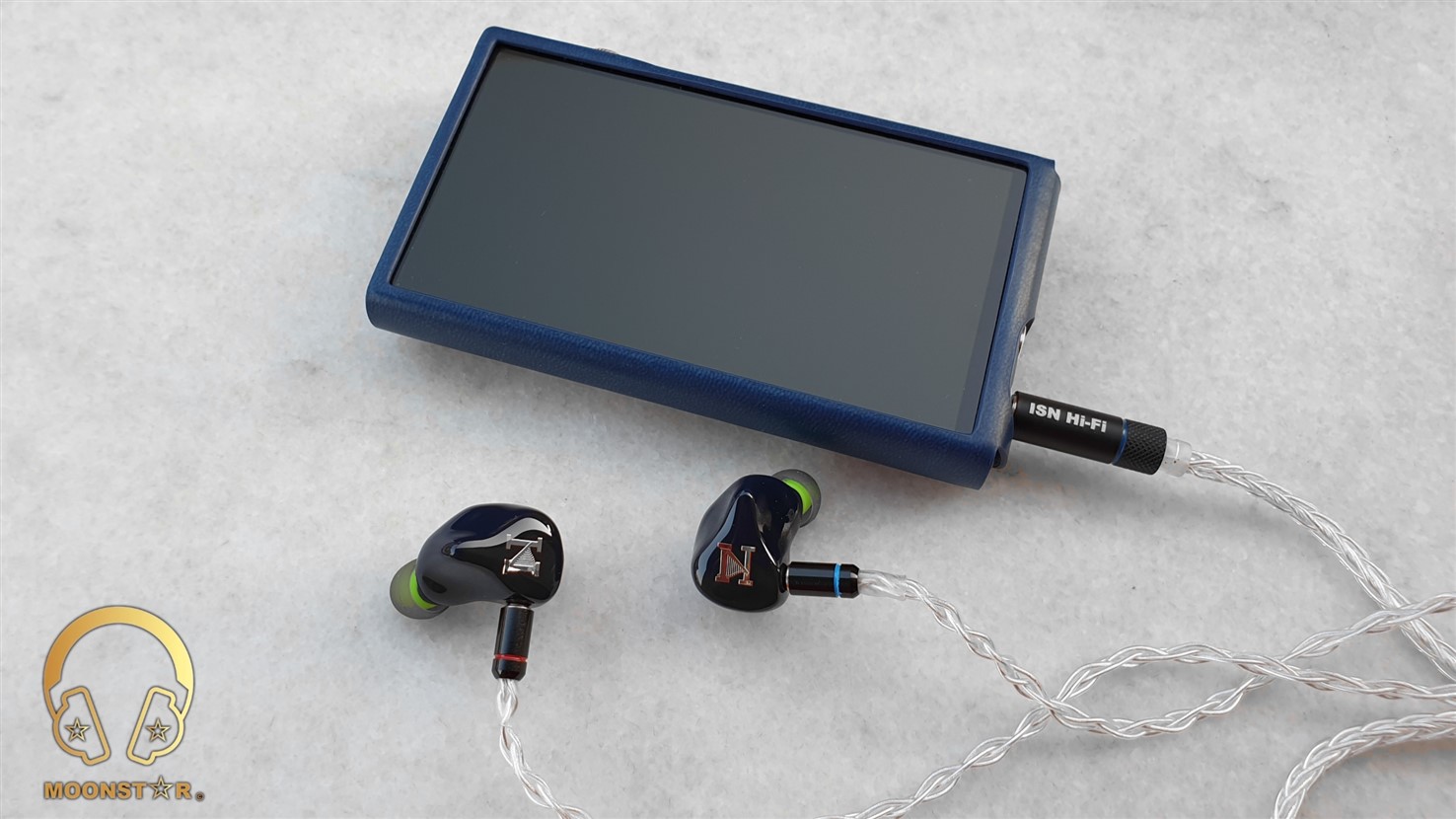 The upper midrange of the ISN Audio H40 shows a slightly boost around the 3 kHz region which makes the general midrange presentation quite transparent and airy. It has a pretty soft, slightly warm and bright tonality.

The transitions from the upper midrange to the treble range are quite controlled even while listen to treble intensive genres like jazz or metal music. There is a dip in the centre of the lower treble region around the 5 kHz region which do tame the presentation of the highs that without to dim the overall clarity.

The upper treble region is highlighted especially between the 7-8 kHz region that gives the general presentation of the ISN Audio H40 a nice amount of sparkle and air. There is a roll off after a peak in the 8 kHz range that drops in a controlled way which I think is made by the sound engineers of ISN Audio to make the sound fatigue free.

Instruments like hi-hat in metal music are fairly pronounced, while the extension of this instrument such like snare drums and ride cymbals is in general short. 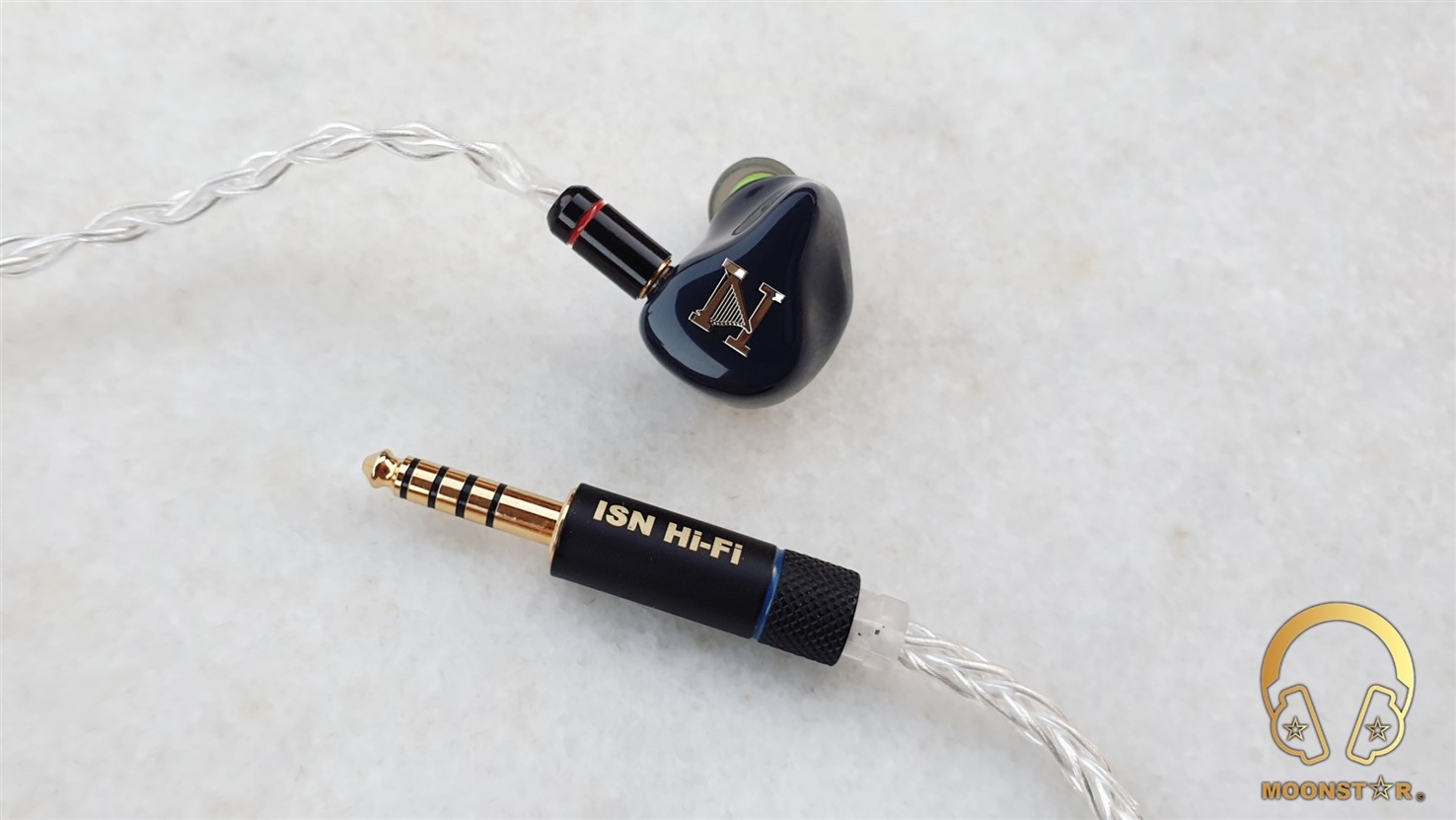 The sense of separation between the right and the left channels is pretty audible and shows also a smooth progression which makes the H40 to a successful IEM at this price category when it comes to close to natural imaging.

Both the Brainwavz B400 and the ISN Audio H40 do have a musical and warmer than neutral tonality without to sound hot or dull.

The subbass of the H40 has more depth, better extension and is also superior in terms of intensity and rumble. The Brainwavz B400 shows les depth and quantity while it still pretty good with genres like pop or rock music, but doesn’t has the wow factor that the H40 offers.

The midbass of both IEM’s do have a moderate of impact and good level of speed, while the H40 has a slightly more natural tonality due to its dynamic driver that does produce the lower frequency region. The bass of the Brainwavz B400 is a tad faster than those of the ISN Audio H40 that performs otherwise pretty good n this area.

The midrange of the H40 has a better level of clarity/transparency and airiness and is also more detailed compared to the B400 that sounds a bit more retrained. 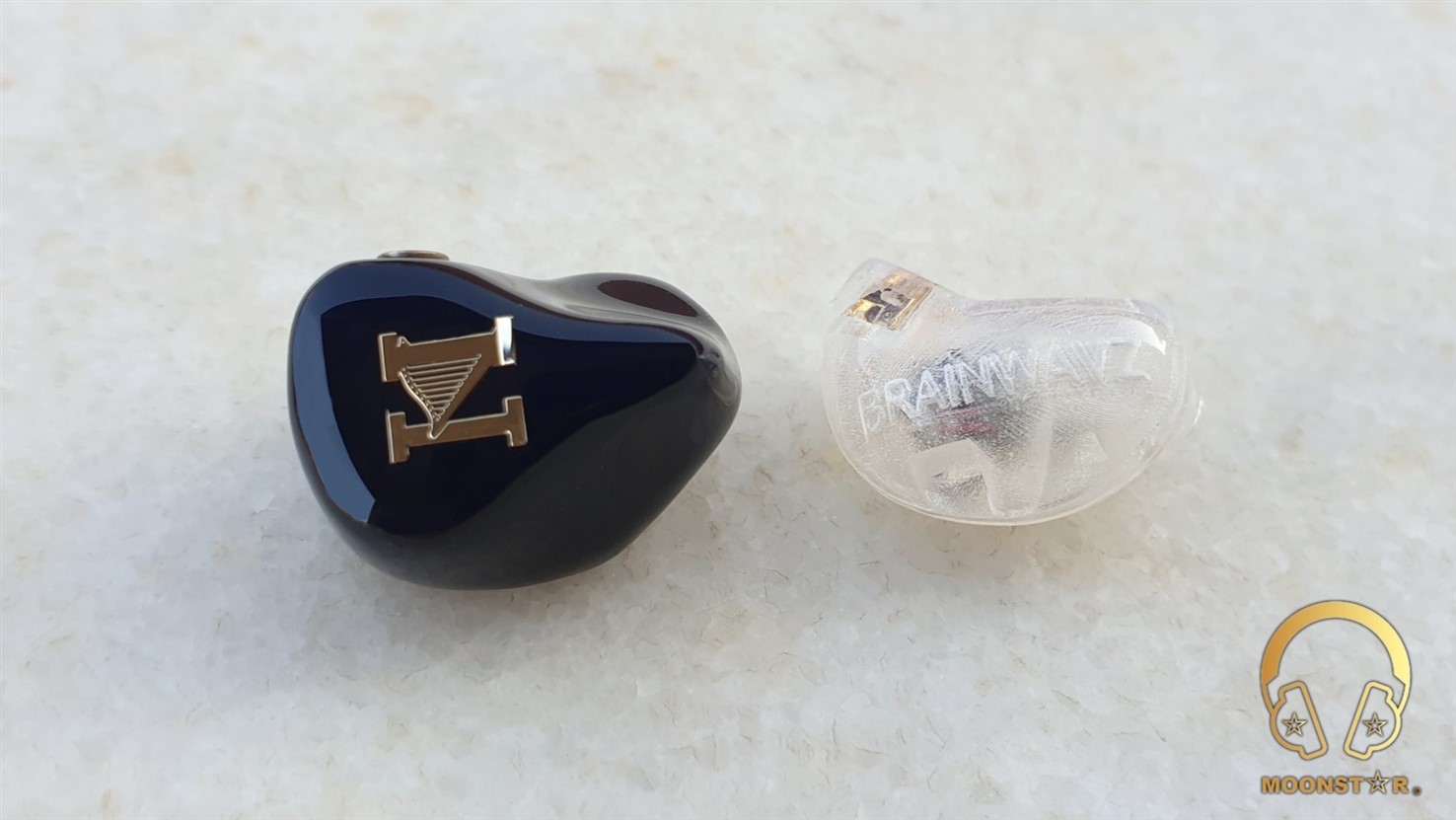 The treble range of the ISN Audio H40 has a more natural timbre compared to the Brainwavz B400 which has a noticeable roll-off in this area. The H40 has the upper hand in terms of treble extension especially in the upper treble region that offer more sparkle and air without to be fatigue.

The soundstage of both the B400 and H40 do show a good level of width, while the ISN Audio H40 has a slightly advantage in terms of depth.

The Campfire Audio Comet shows a darker tonality compared to the ISN Audio H40 which has a brighter and more musical presentation.

The bass of the Comet shows a pretty linear character with a very mildly elevation in the midbass region. The subbass region of the ISN Audio H40 shows more depth, rumble and better extension compared to the relative flat subbass response of the Campfire Audio Comet. The midbass of the H40 have more impact, depth and better texture than the Comet. 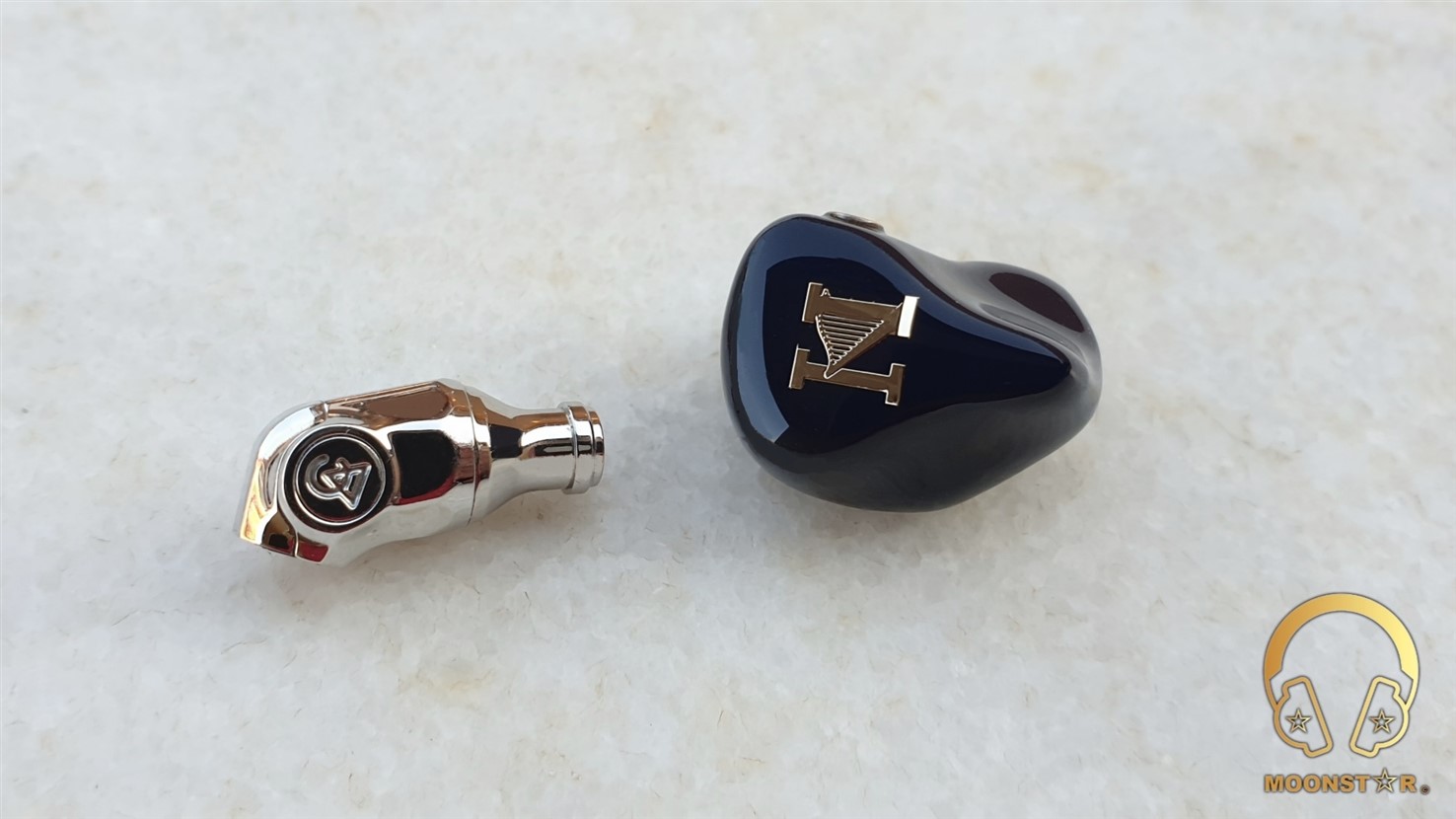 The lower midrange of the H40 shows better depth and extension. Male vocals do sound slightly more detailed and full bodied compared to the Comet, while the difference for the upper midrange and female vocal performance is greater. The ISN Audio H40 is superior in terms of detail, clarity and extension of female vocals and instrument such like guitars, violins and pianos.

The treble range of the Campfire Audio Comet shows a very audible roll-off which is the reason that it sounds a bit hot and unnatural compared to the ISN Audio H40 that offers more treble quantity, detail and extension. The H40 shows in general more sparkle and airiness while the Comet is slightly more controlled.

The soundstage of both In-Ear Monitors is pretty equal in terms of wideness, maybe a tad wider with the ISN Audio H40, while the H40 shows a better performance in terms of soundstage depth. 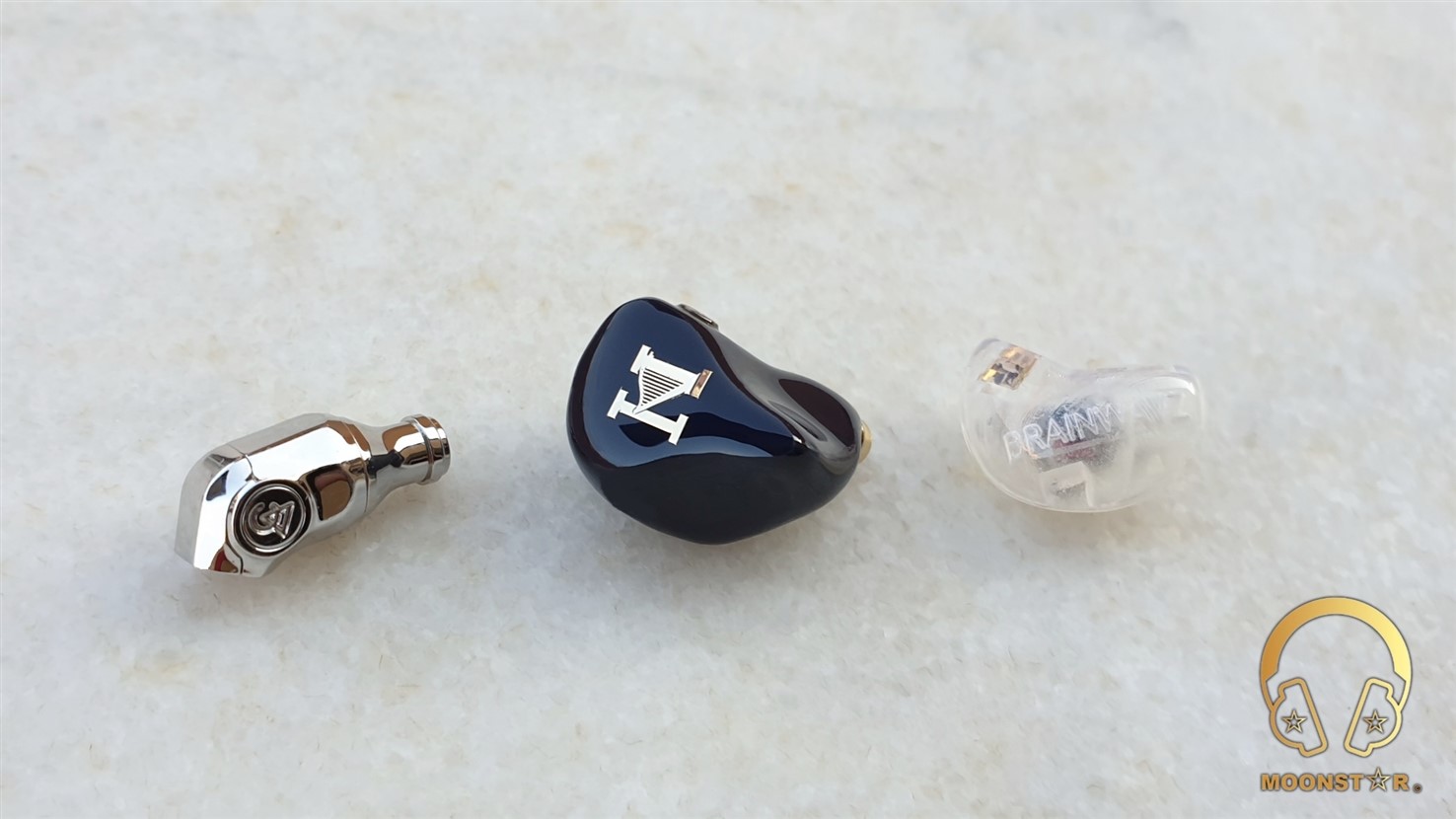 The ISN Audio H40 is an impressive Hybrid Driver IEM that shows a very high price to performance ratio, because it offers an entertaining, detailed and genre friendly sound tuning along with great build quality and beautiful optics that explains why it is so popular in the audiophile community.