METALURE originated in New York and the team is formed by the audio design team from NuForce with the mission to achieve diversified fashion craftsmanship with continuous development to bring products on the market with a natural luxury.

The WAVE is an In-Ear Monitor that features a solid Brass Housing and special Dynamic Driver with a polymer coated Liquid Silicone Rubber (L.S.R.) diaphragm, which is called the NOMAX diaphragm. 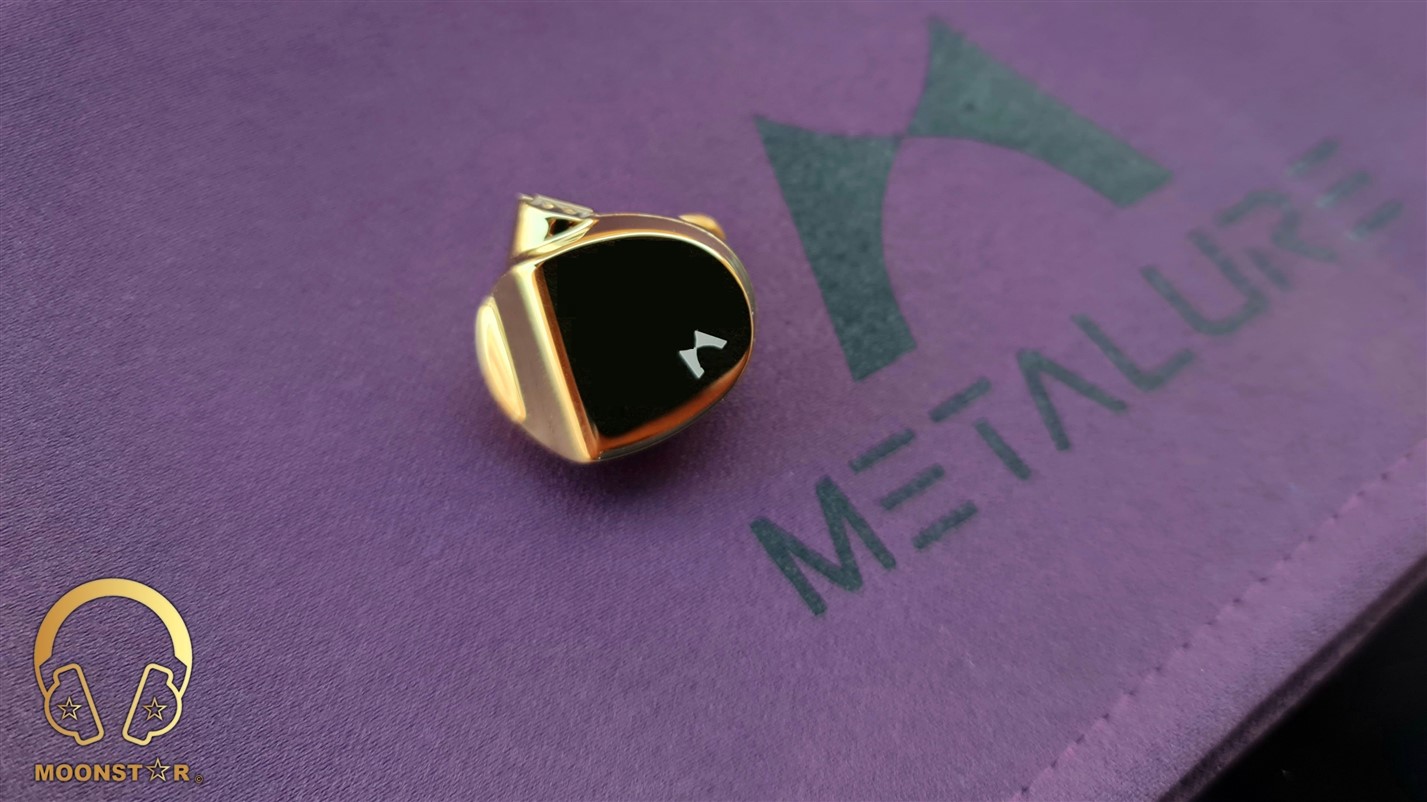 I would like to thank METALURE for providing me the WAVE as review sample. I am not affiliated with METALURE beyond this review and all these words are reflecting my true and unaltered opinions about the product.

The actual price of the METALURE WAVE is $599.00 USD. More information’s can be found under the link below;

The METALURE WAVE came in a stylish cardboard box in white color that that the brand logo in Gold color on the top and some prodcut details at the bottom. There is a small compartment where you can find the accessories of the WAVE. 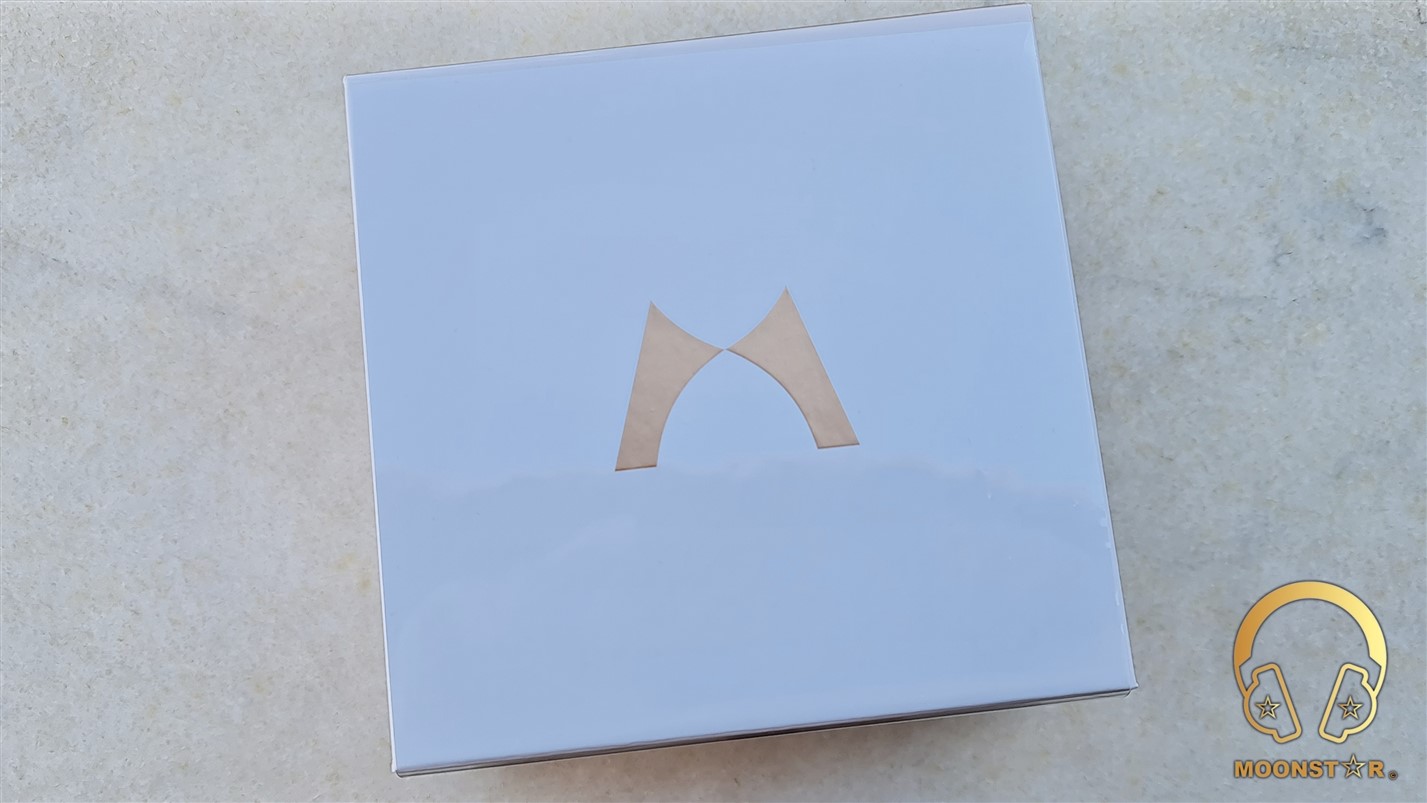 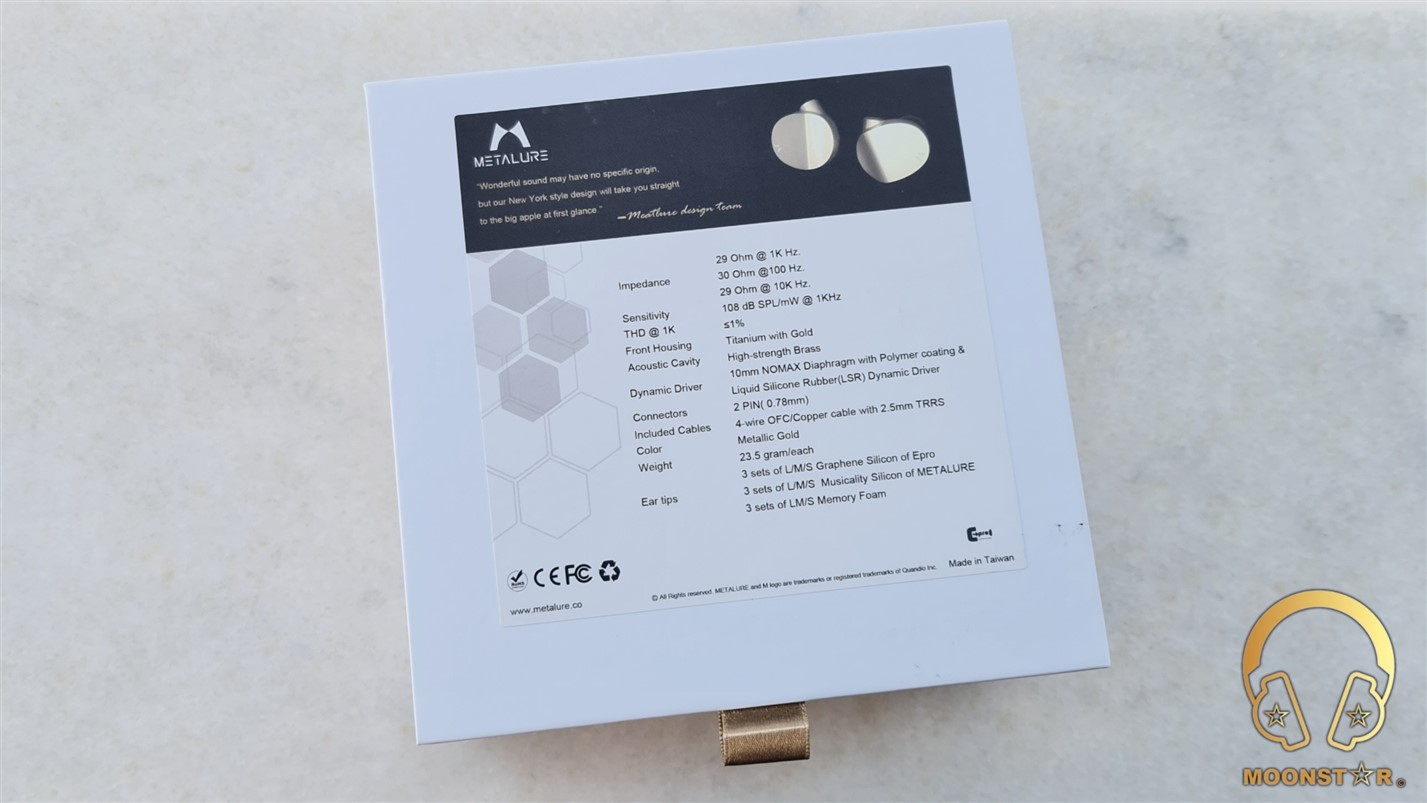 The box of the WAVE contains the following items; 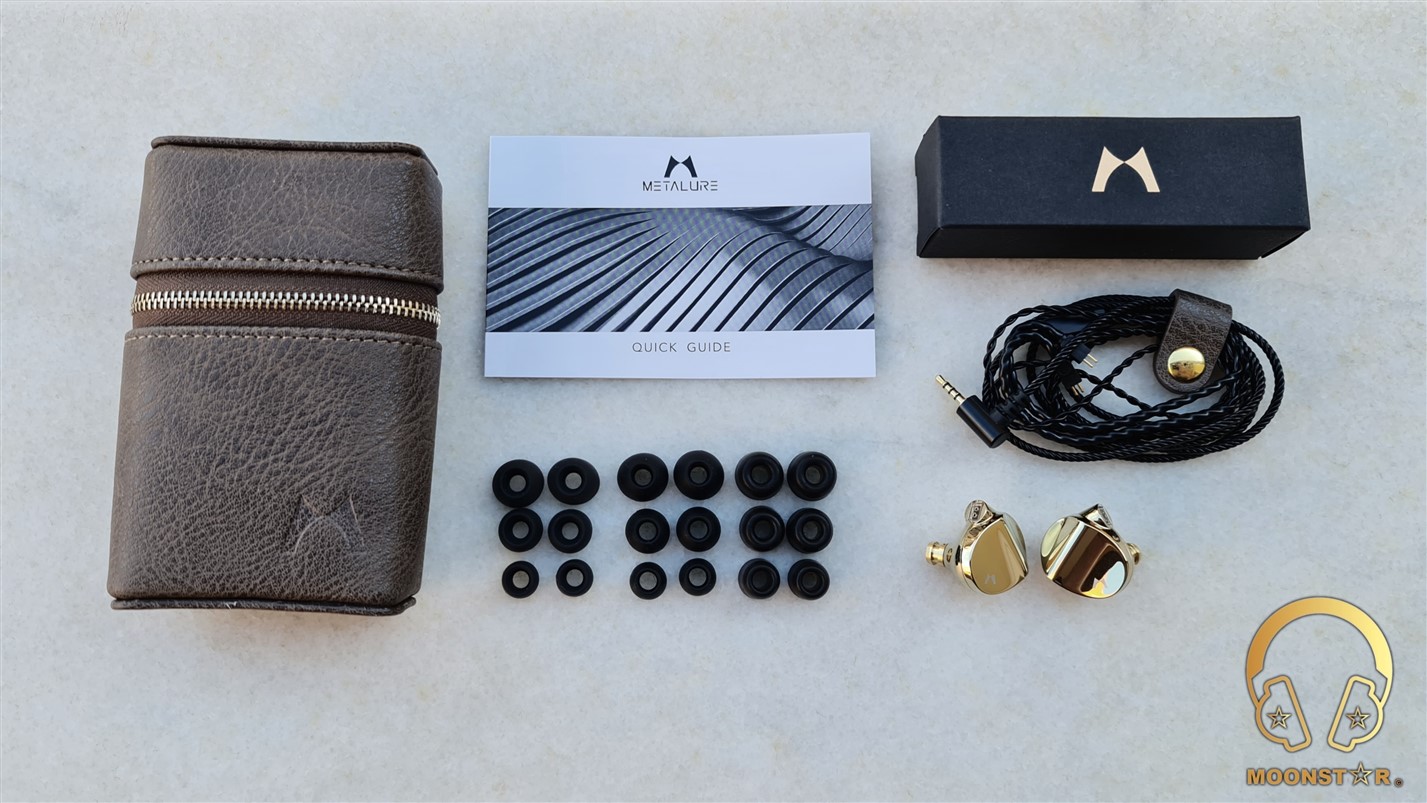 The METALURE WAVE comes with a wide variety of ear tips that includes 6 pairs of silicone and 3 pairs of foam ear tips. 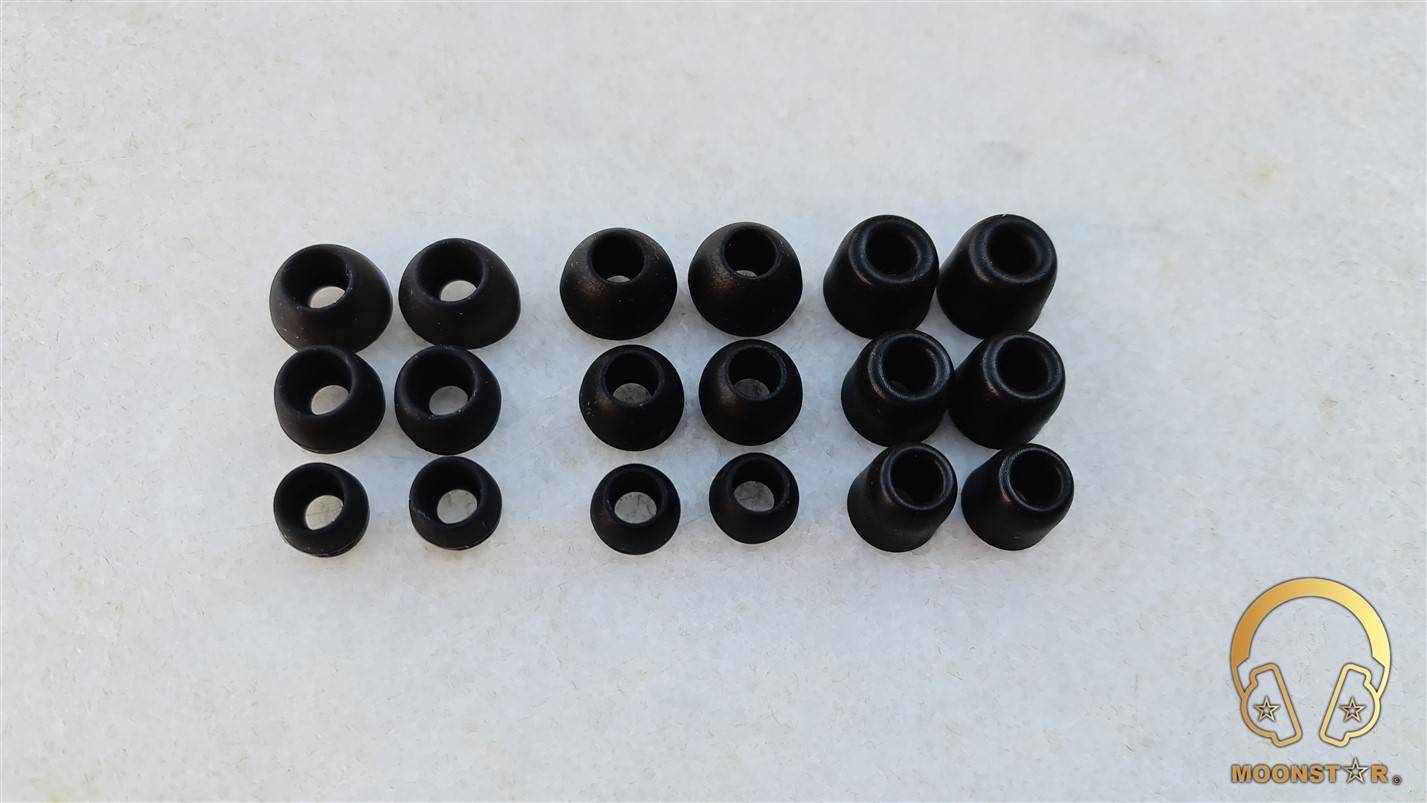 The leather carry case with zipper looks very stylish and is of high quality. 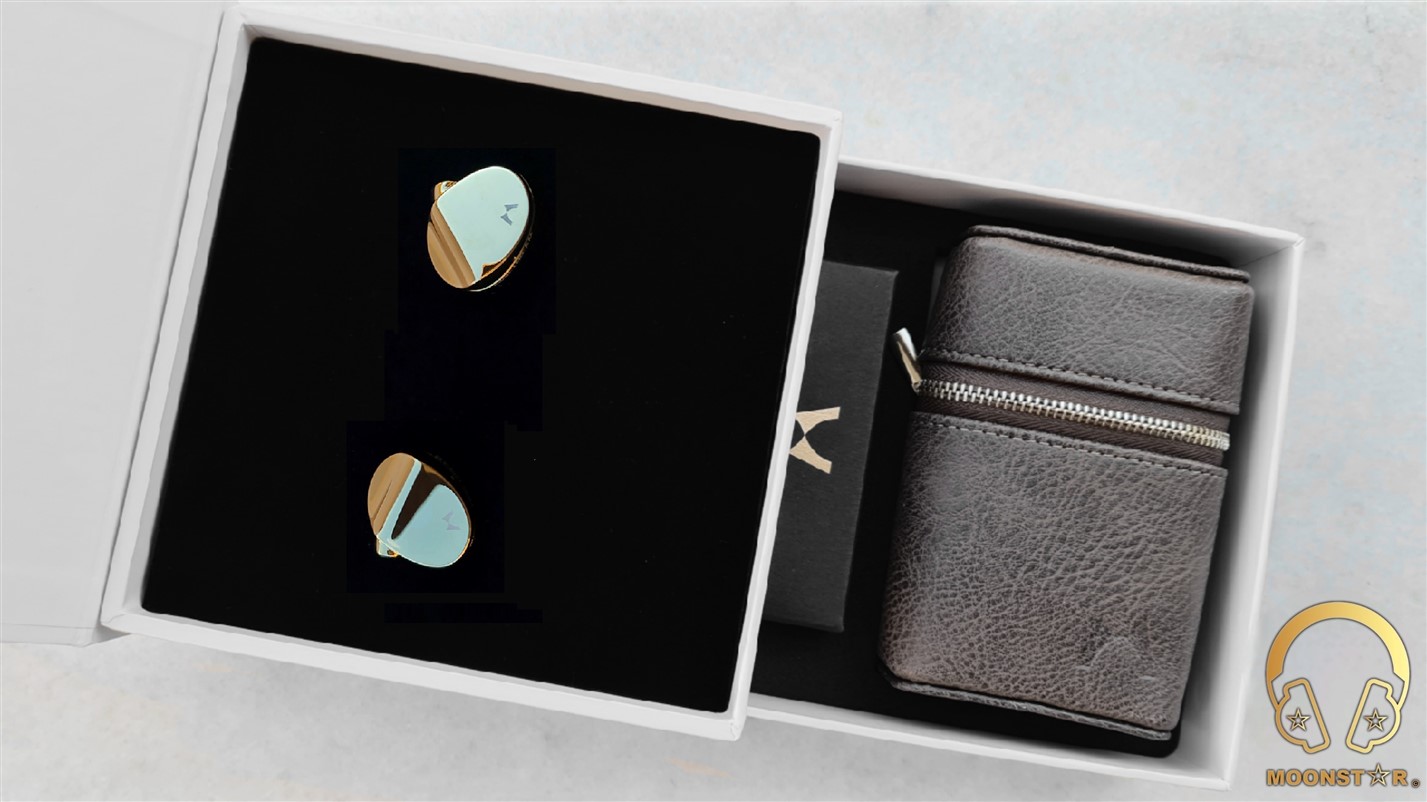 The METALURE WAVE is a very robust In-Ear Monitor with metal housing that has a glossy finish in gold color. The acoustic cavity is made of high-strength CNC machined Brass Material, which explains the pretty hefty weight of each monitor that is about 23.5grams.

The monitors of the WAVE do have an egg-shaped design that fits perfect to my moderate sized ear concha. 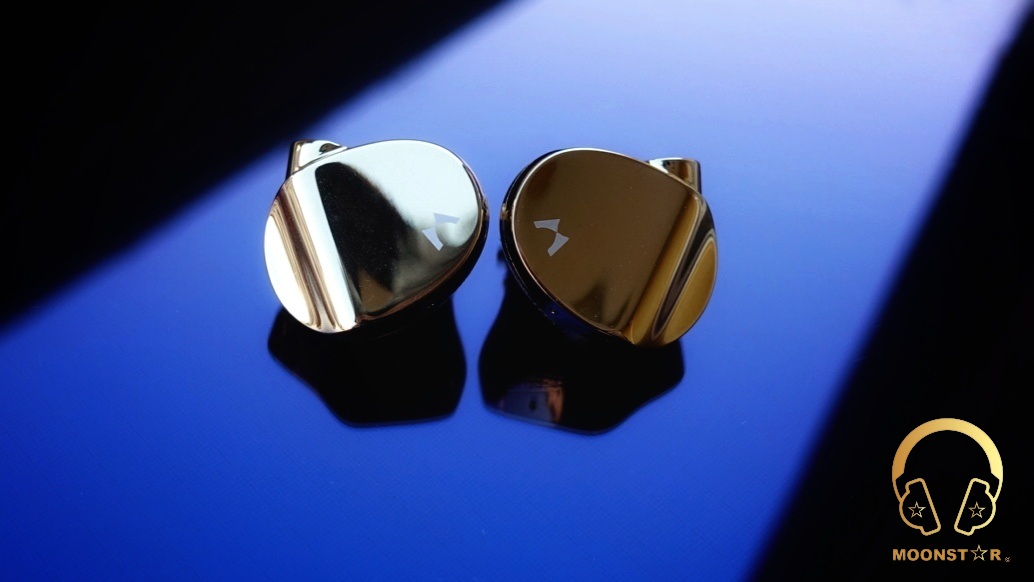 The Monitor has a combination of 3 main parts, which is the front part (faceplate), the rear body and the sound nozzle. 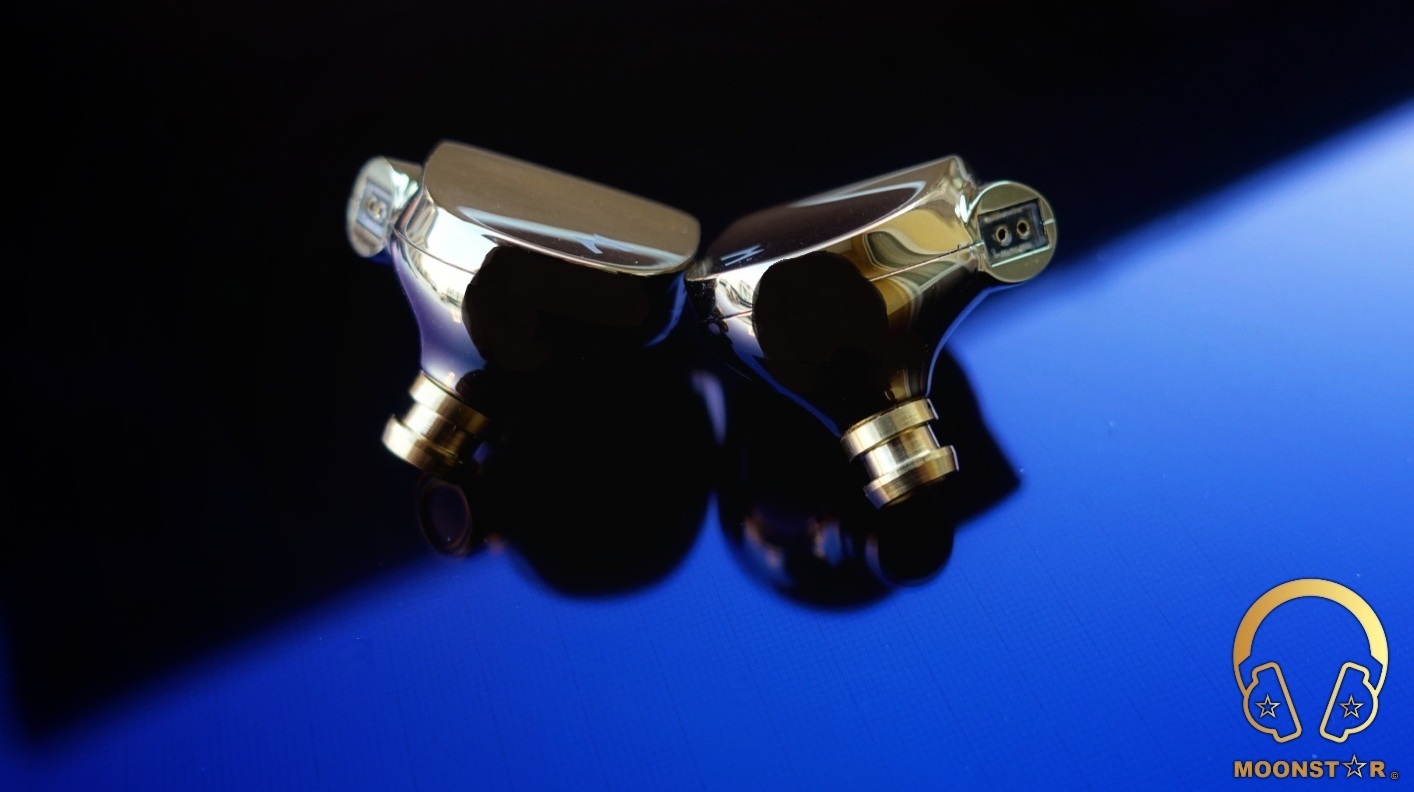 On the front (faceplate) of each monitor is the METALURE logo, which is an M letter which a stylish design. Here is also an elevation in form of a wave, which is a referrer to the WAVE model naming. 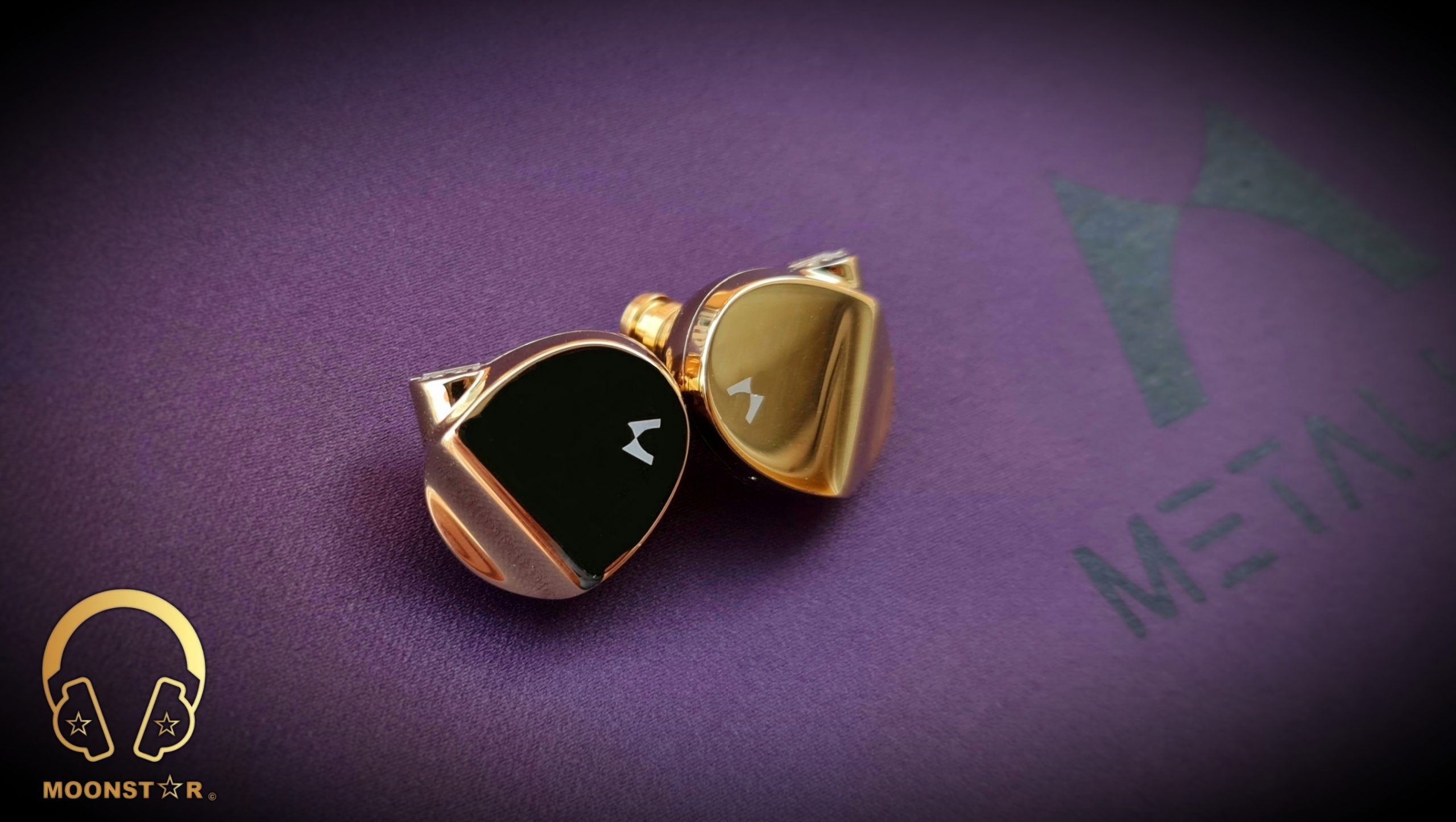 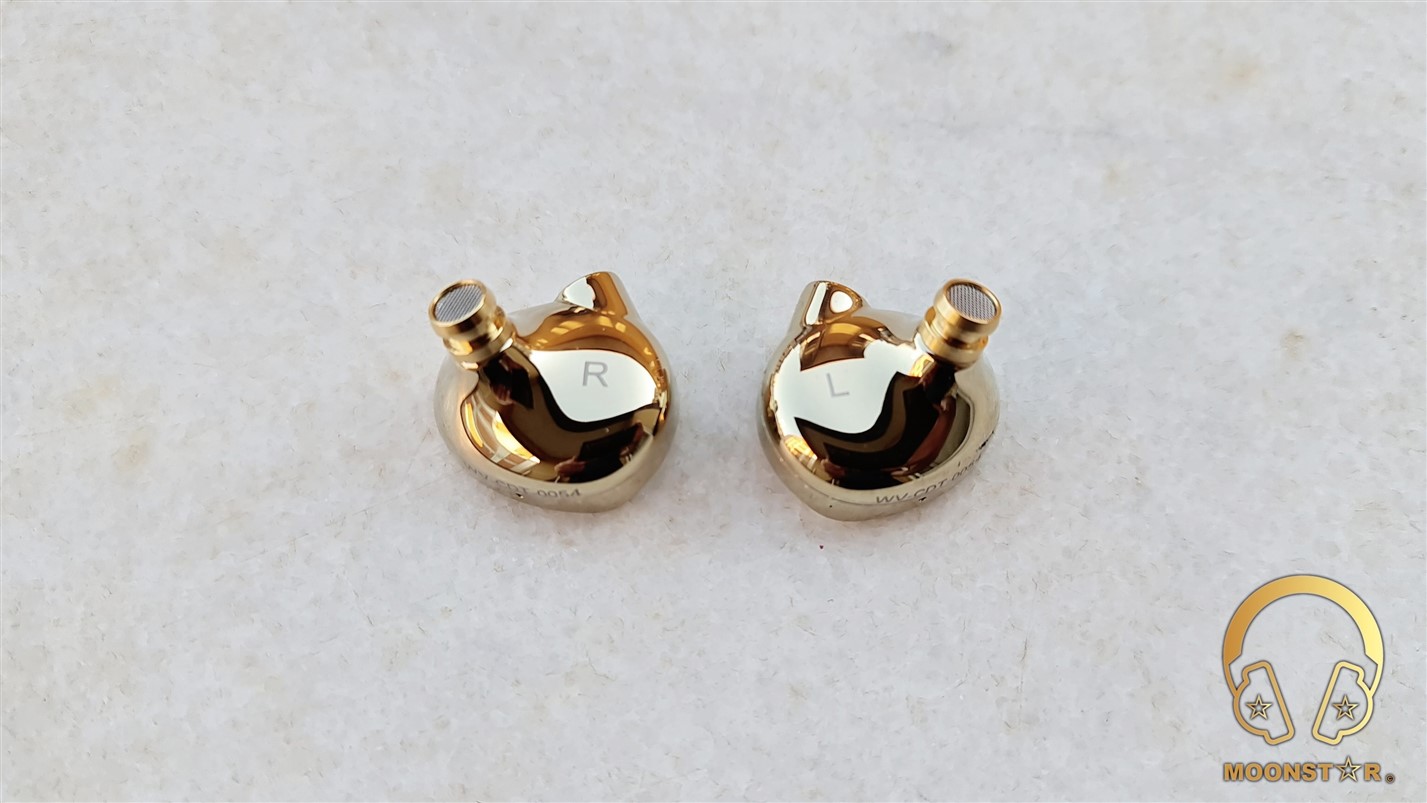 At the bottom of each monitor housing is a small vent for the Dynamic Driver and the serial number of the unit. 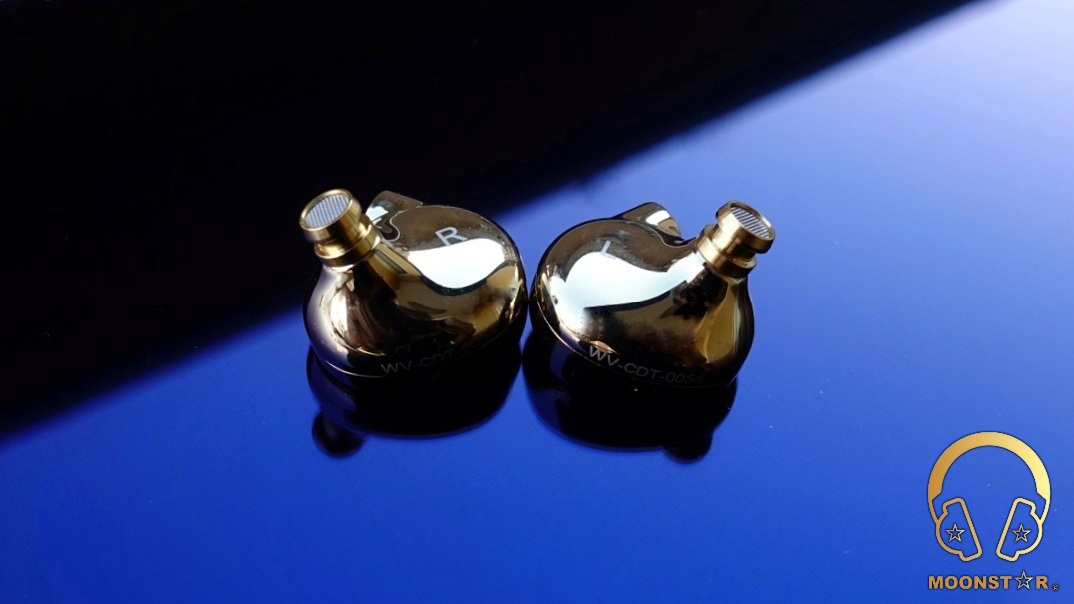 The sound nozzle is made of gold plated titanium material and has a slightly angled profile. On the top of the nozzle is a fine metal mesh that will prevent the insertion for strange particles like dust, ear-wax, etc. 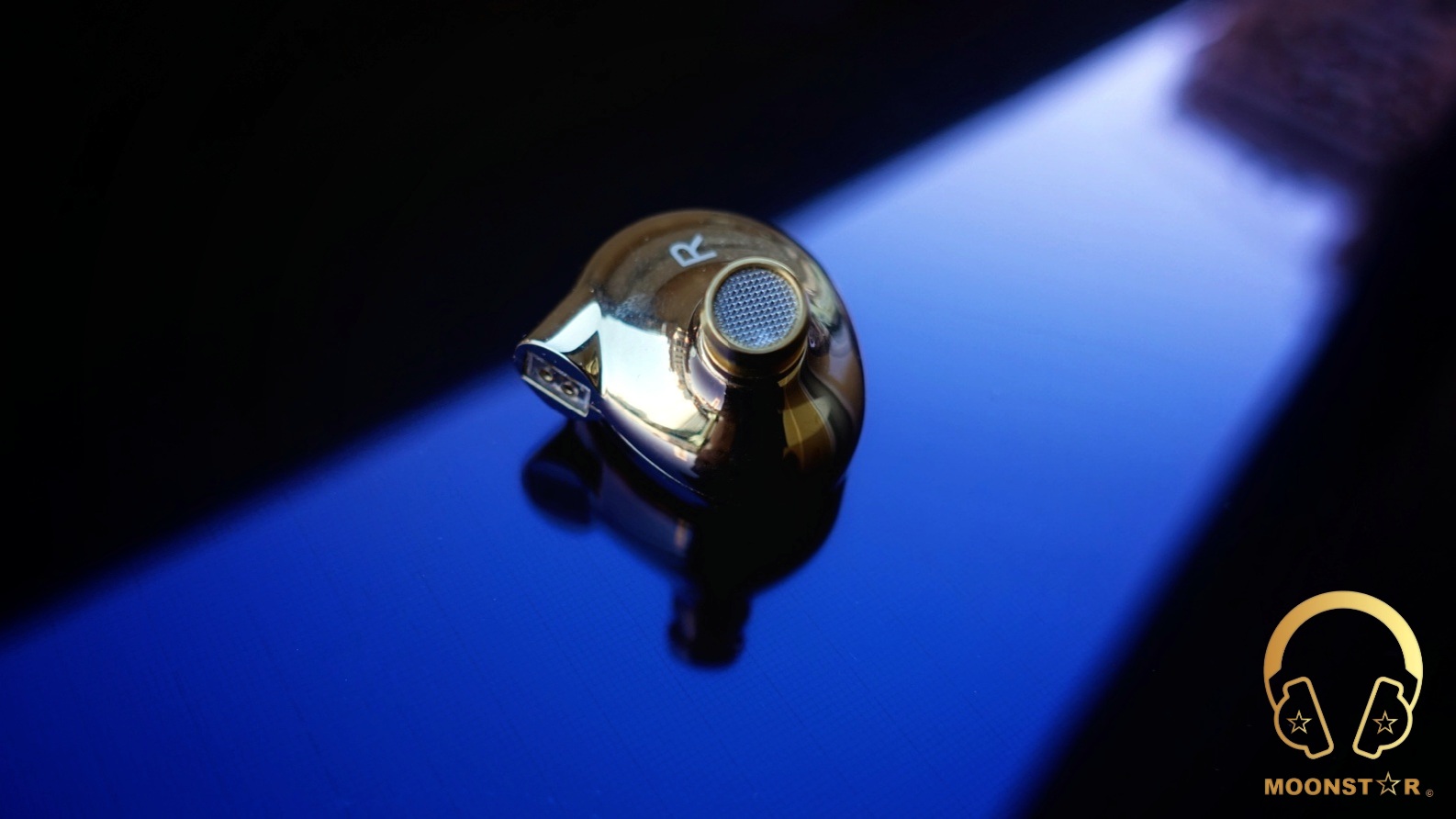 On the top of the each monitor shells are the 0.78mm diameter 2-Pin female connectors. The connectors are quite robust and offer a tight and save connection. 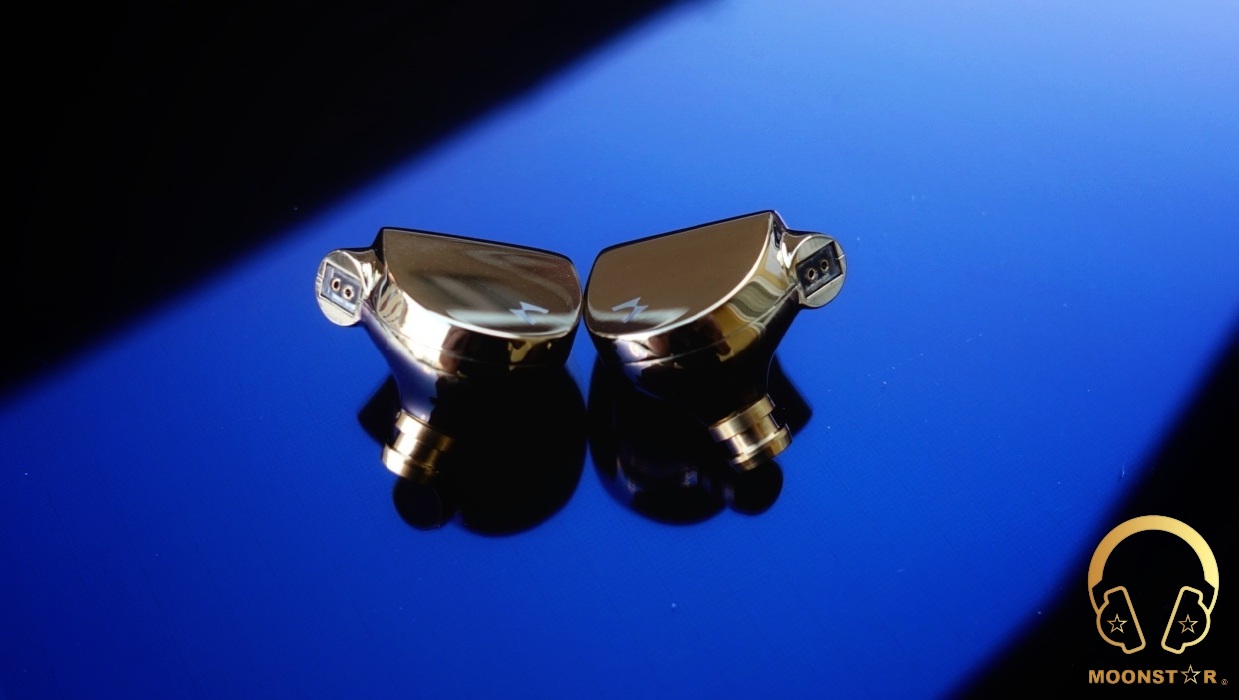 The detachable cable of the METALURE WAVE features 0.78mm diameter 2-Pin male connectors. The 4 core cable is made of high purity OFC (Oxygen Free Copper) Copper Wire material, which has a twisted profile. The outer is made of a soft plastic material in black color that is not prone to mixings. 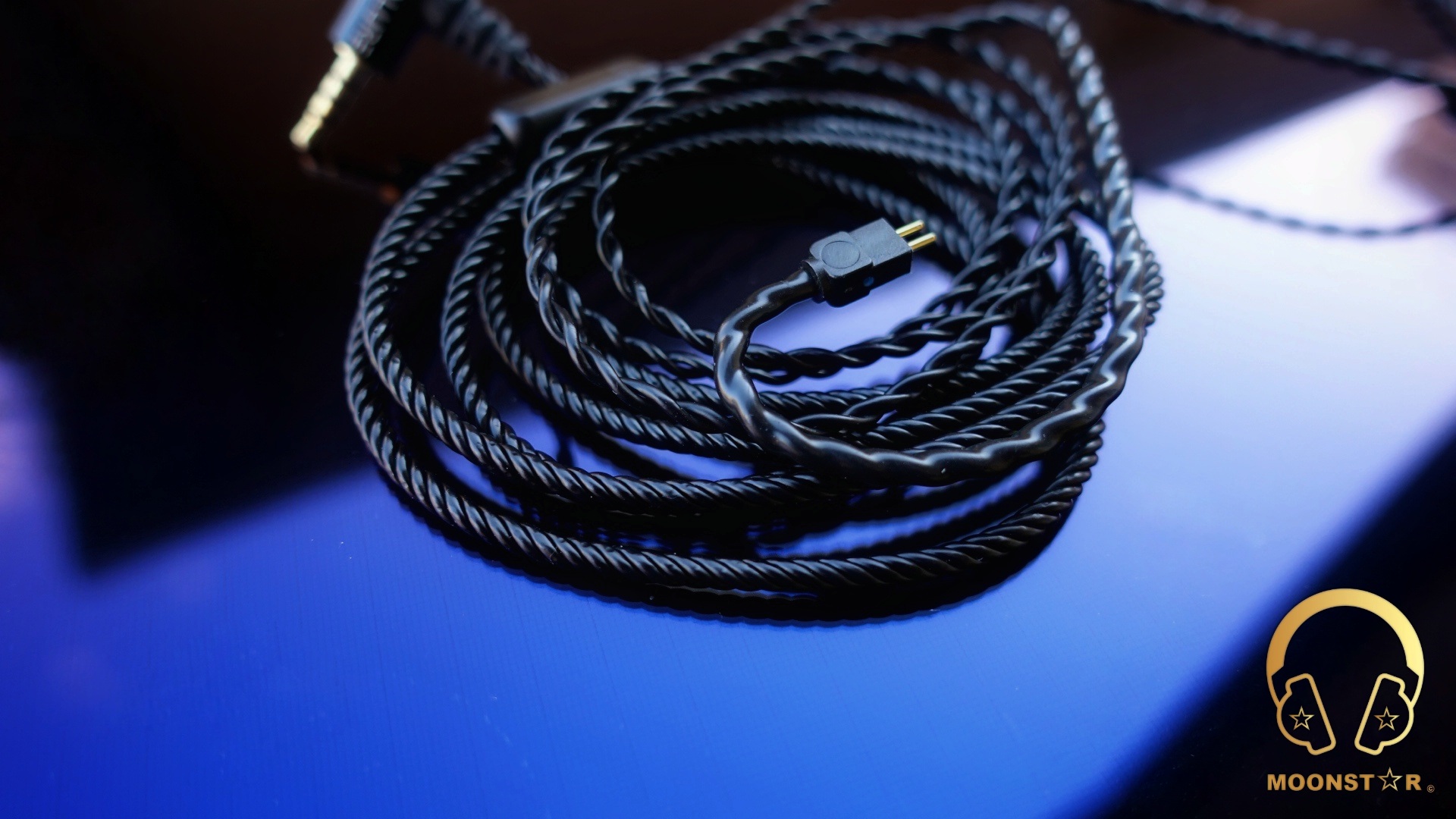 The connectors do have a plastic housing that do have Left (blue) and Right (red) color indicators at the rear side. 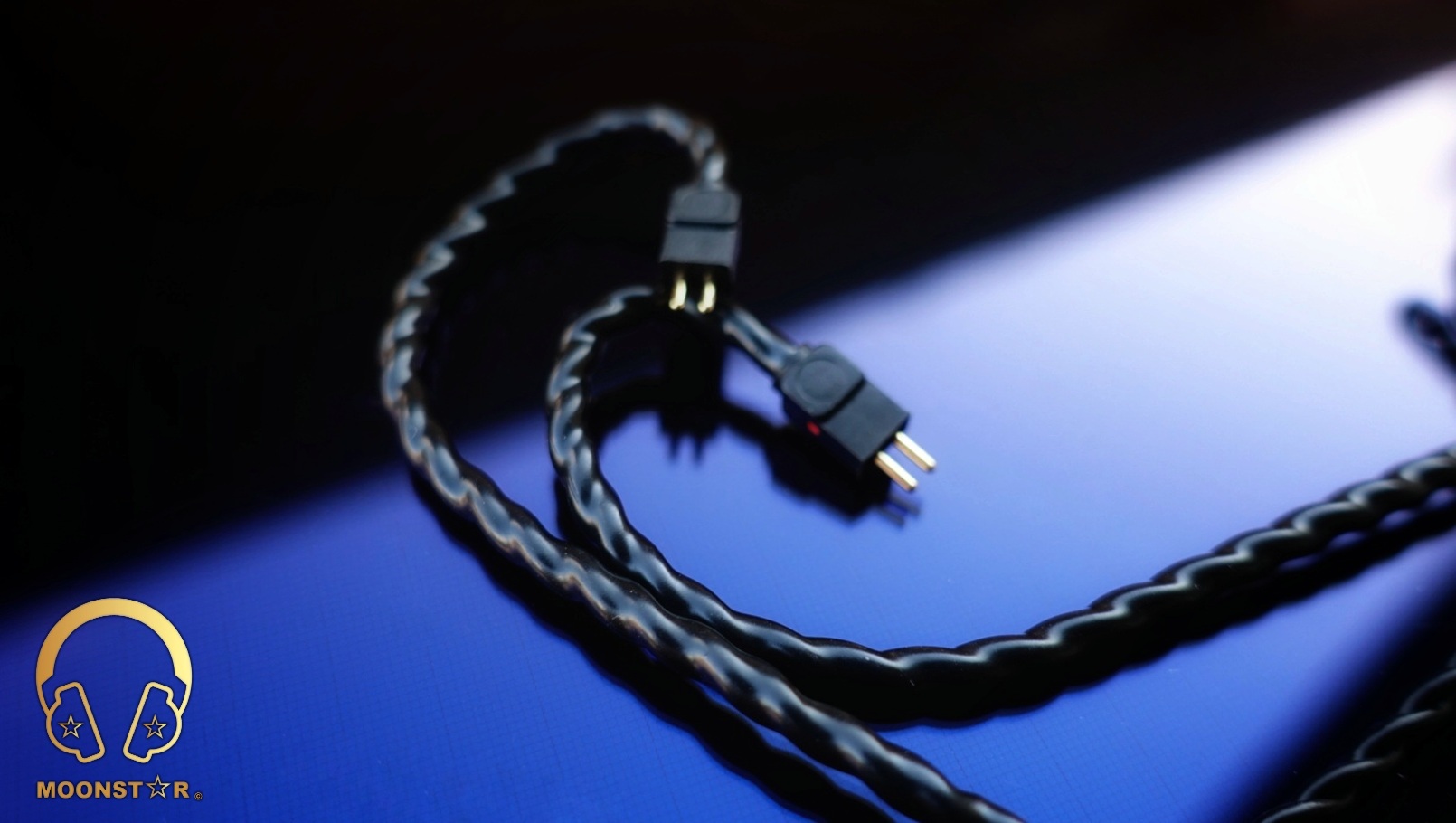 The cable has heat shrink ear guides on both sides for extra comfort, especially for on the go.

The detachable cable features a metal Y-splitter a plastic chin slider in black color. The Y splitter has the METALURE brand logo on the top. 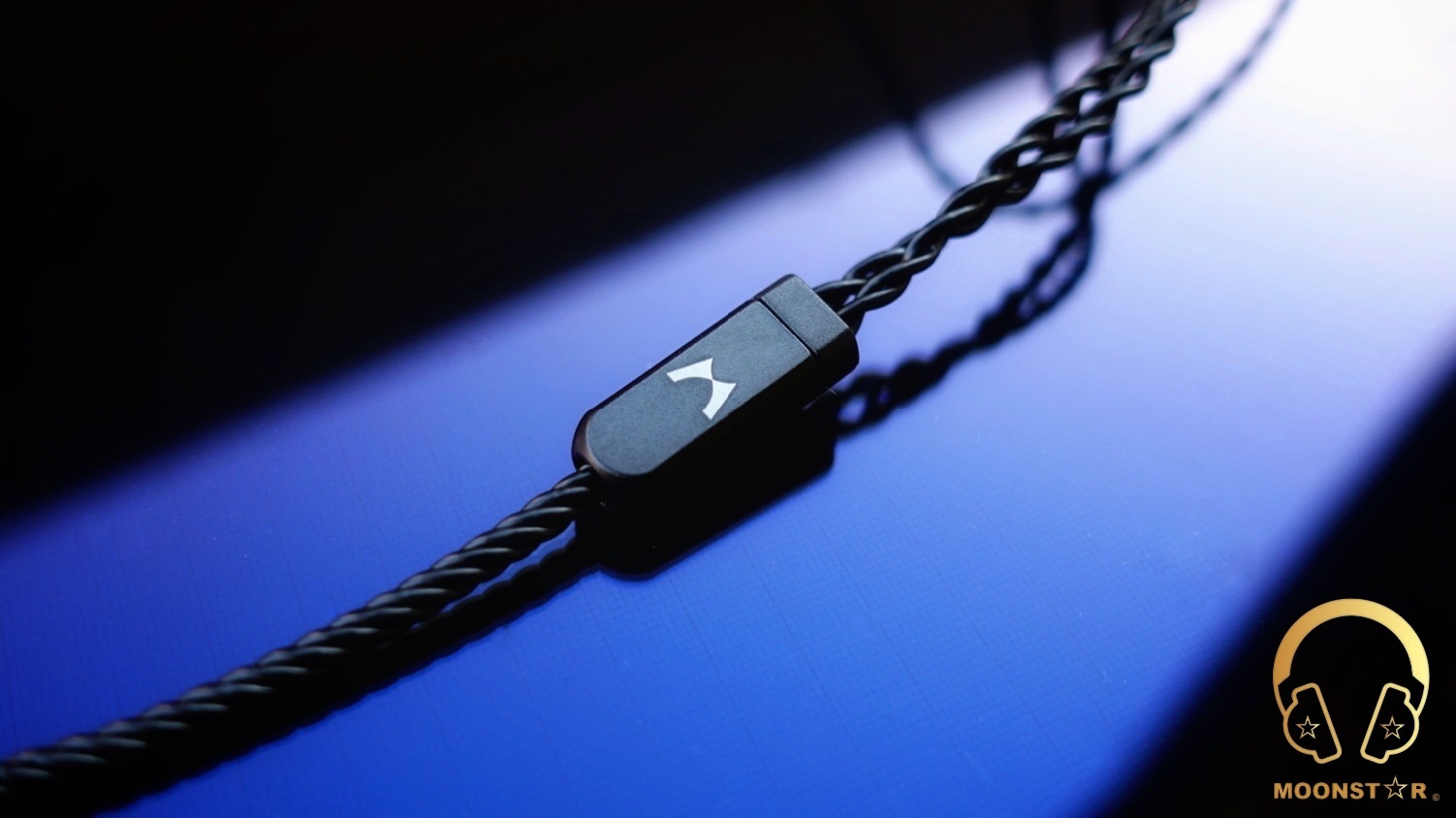 The 2.5mm Balanced (TRRS) headphone jack has an L profiled hosing with the METALURE branding. 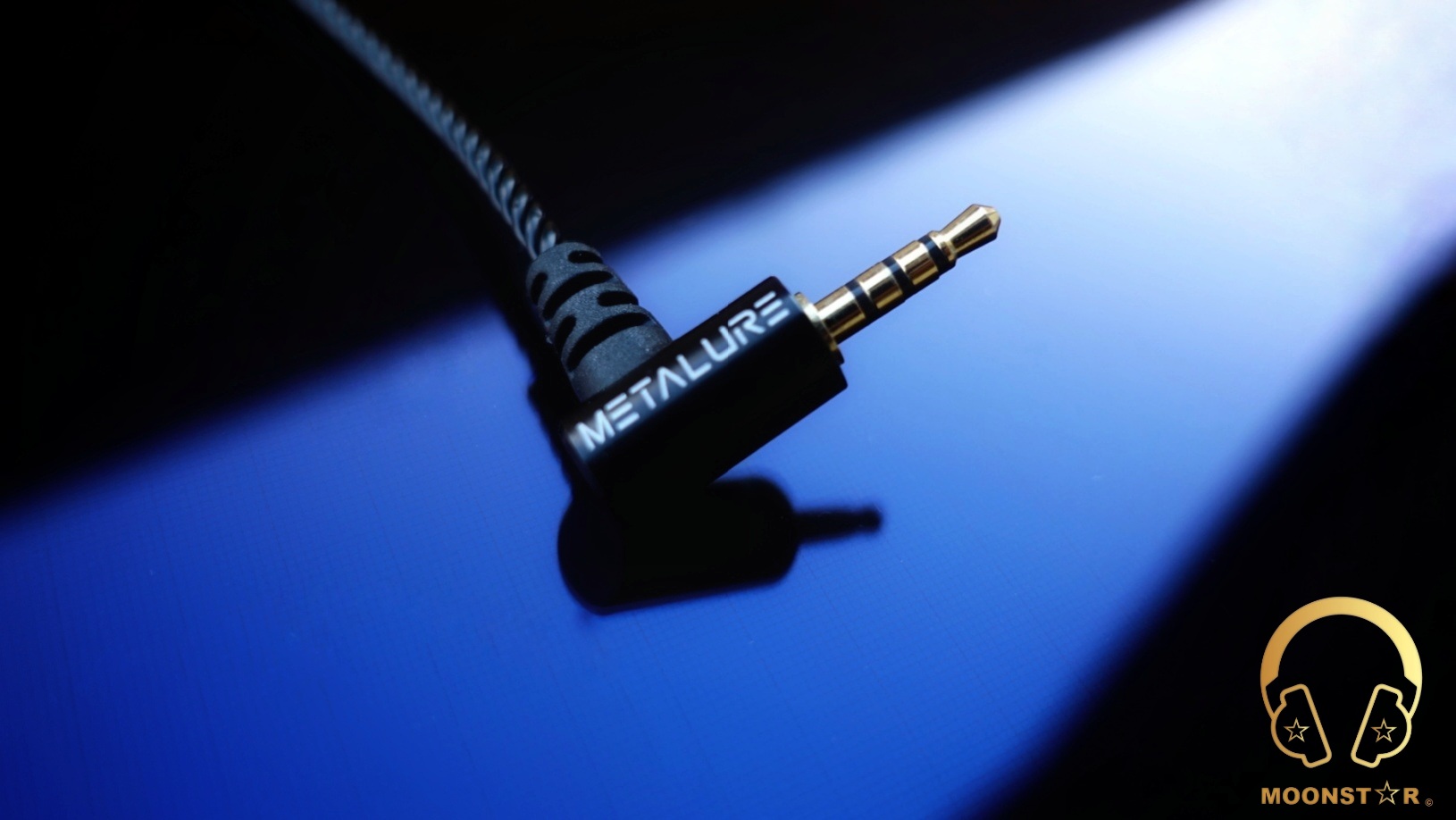 The monitor shape of the WAVE fits perfect to my average sized ear concha, which has no sharp edges. It offer a good sense of comfort, while it is not a very lightweight monitor compared to the ones with a resin or aluminum housing.

The noise isolation of the METALURE WAVE is on an average level, while it is quite acceptable for the use in relative noisy environments like metro, bus or train.

The METALURE WAVE is a relative efficient IEM with an impedance of 29Ohm @1kHz and a sensitivity of 108db @ 1kHz, which makes it compatible with sources like Smartphones, Tablets or USB Dongles with low amplification capabilities, while it shows its true potential if you pair it with more powerful sources like a DAP or DAC/Amplifier. 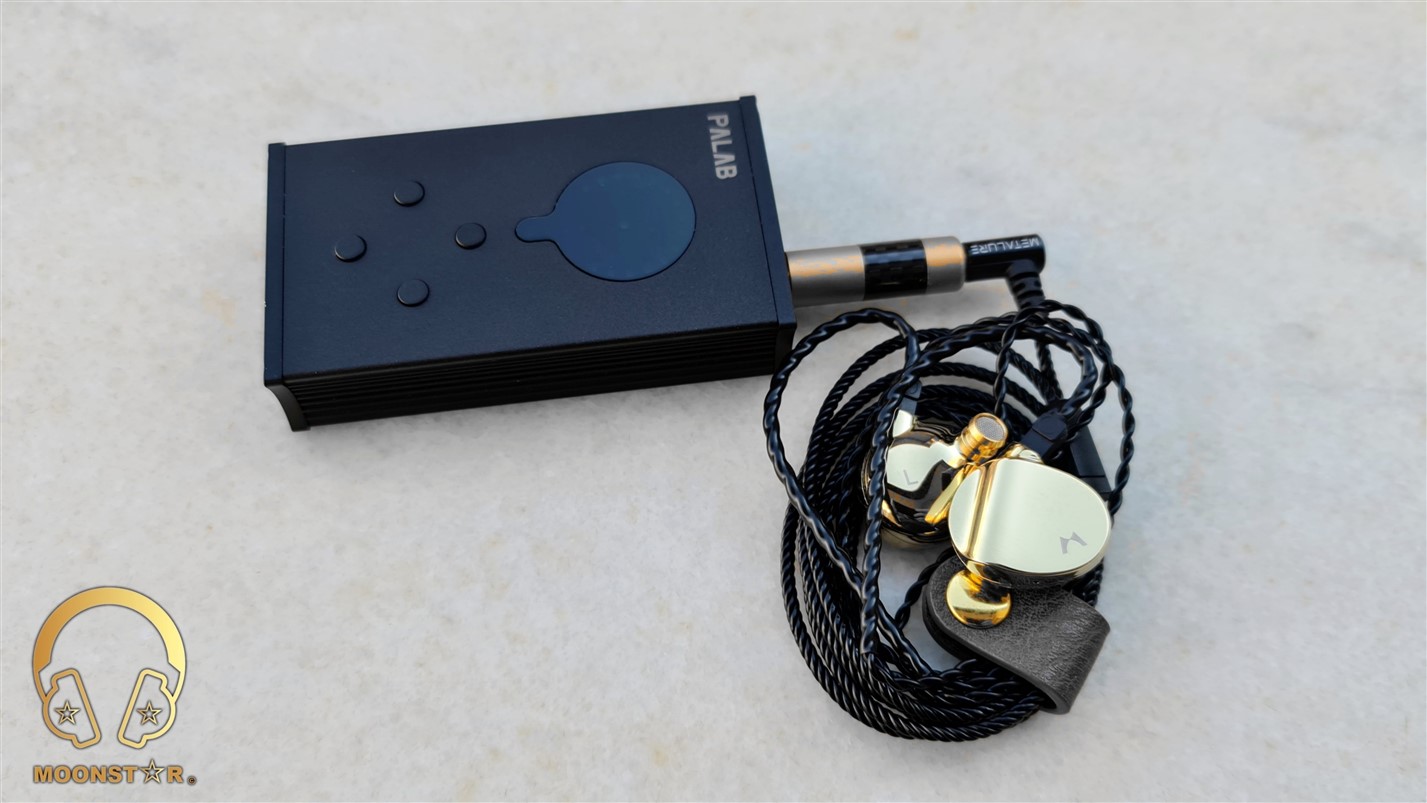 The WAVE is a highly musical sounding In-Ear Monitor with a relative warm tonality that shows a mildly V shaped sound signature. The bass is powerful and controlled, while the midrange is pretty lush and musical. The treble range on the other hand is concentrated in the lower treble region that shows more intensity and extension compared to the upper treble area. 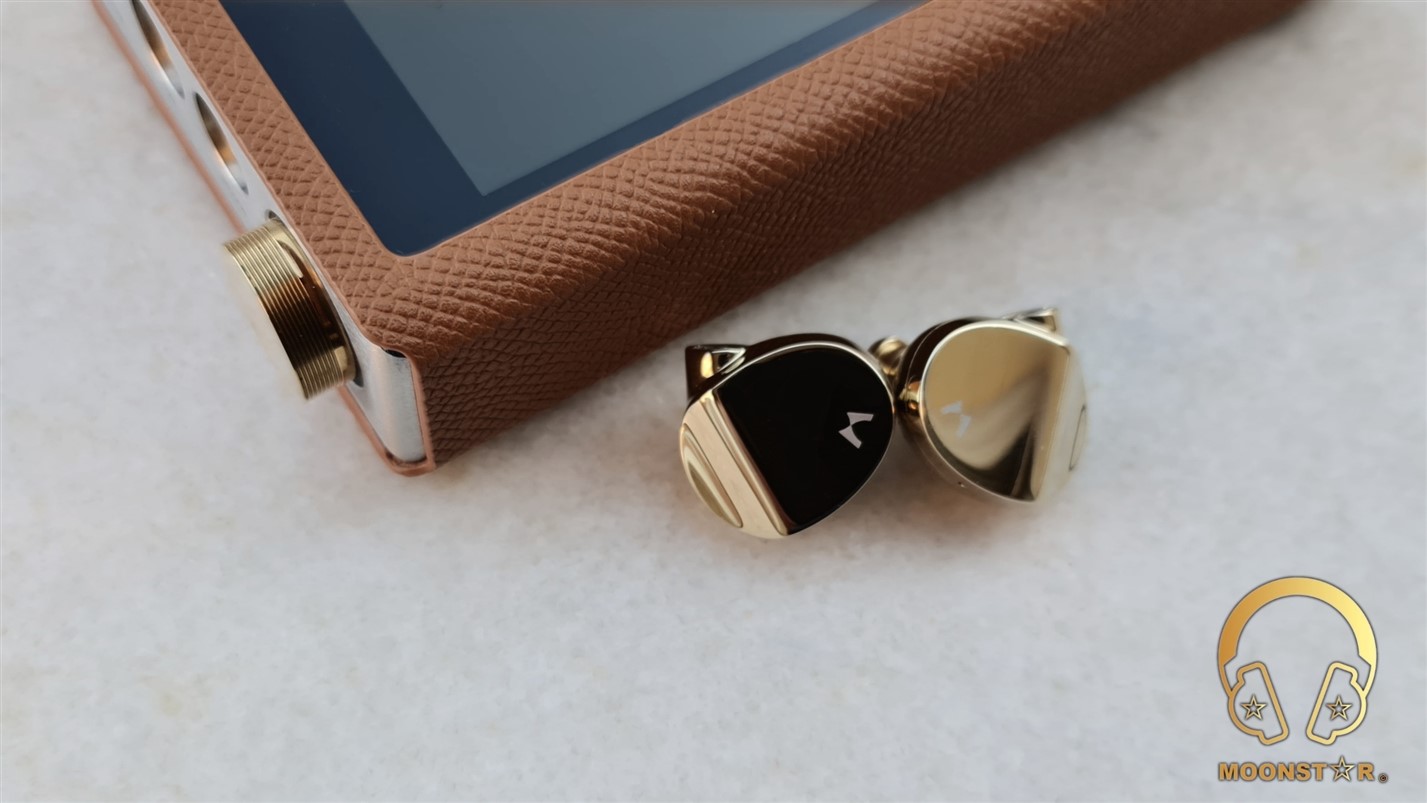 The METALURE WAVE offers a powerful lower frequency response from the subbass to the midbass region that adds a nice sense of dynamism and warmth to the overall presentation without to sound overdone.

The subbass region of the WAVE shows a great sense of depth, intensity and extension, which has in general a fairly warm and bold tonality. It doesn’t sound too boomy or muddy and shows a good sense of speed and control.

The midbass region of the METALURE WAVE shows a great sense of body and fullness, without to sound overdone. The speed, control and impact is suitable for almost any type of music genre, from pop and electronic music up to faster genres jazz or metal music.

The lower frequency region is one of the Highlights of the WAVE that shows in general an impressive performance in terms of technicality, resolution and musicality. 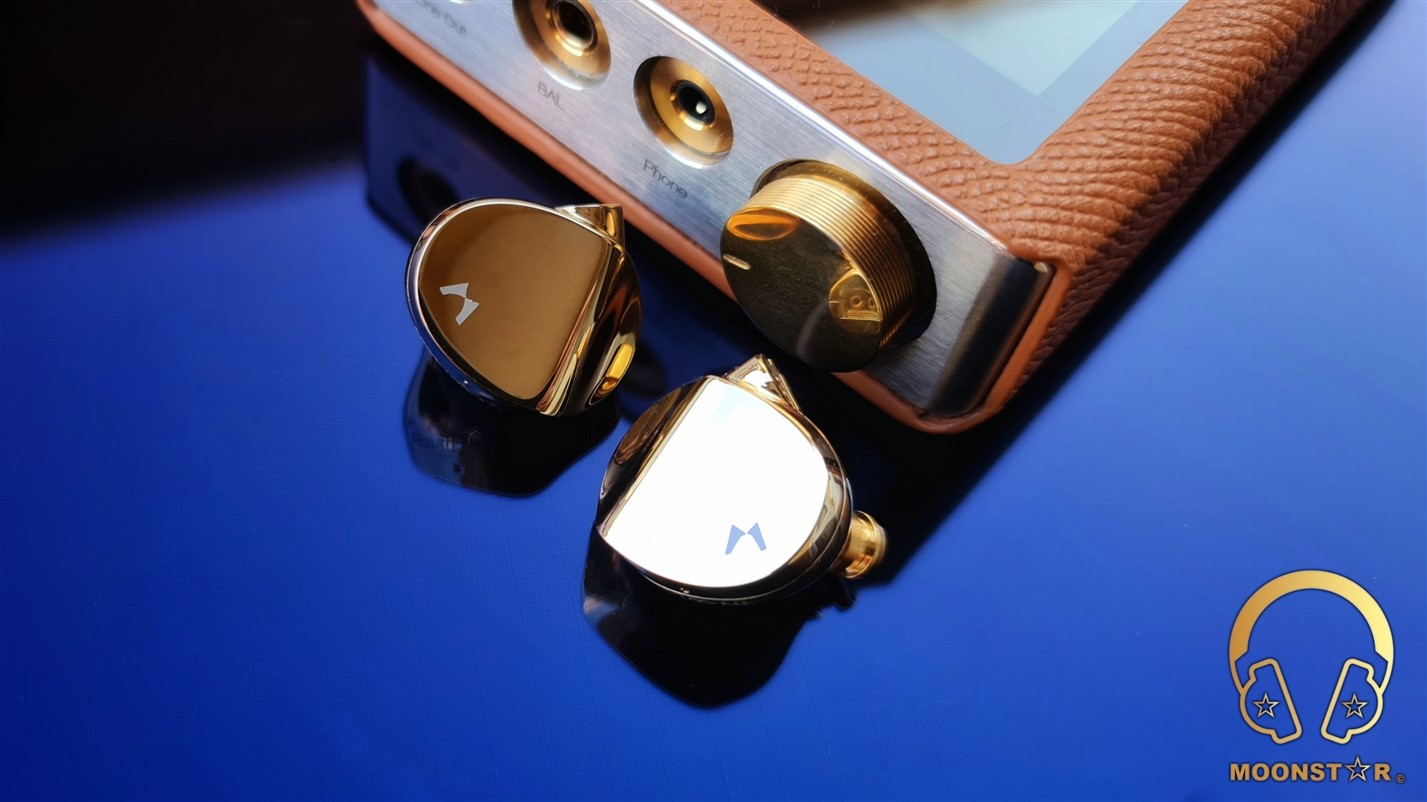 The METALURE WAVE shows a nicely warm midrange tonality and sound in general smooth and fairly transparent, while the level of airiness and clarity is above average.

The WAVE has a good lower midrange depth and intensity, with an average thickness and smoothness. This is an advantage for male vocals with a thick and deep tonality. The clarity and detail level is also pretty good, without to show negative situations like muddiness or mixings. The WAVE sounds quite successful and enjoyable with male vocals from Dave Gahan to Eric Clapton or Sting.

When it comes to female vocals, the WAVE shows a pretty efficient level of transparency and clarity thanks to nicely pronounced upper midrange character. The tonality of female vocals is in general fairly warm, silky smooth and emotional, without to shows some negative situations like sibilance or sharpness, when I do listen to voices like Edith Piaf, Sarah MacLauchlan or Diana Krall.

The WAVE shows in general a noticeably warmer than neutral and full bodied instrument tonality. The timbre of instruments is lush and sweet while the resolution is above average.

For example; pianos are mildly bright, soft and pronounced, while the guitar in Lunatic Soul’s “The Passage” sounds musical, full bodied and emotional. Violins on the other hand are slightly bright and fatigue-free while the trumpets are pretty lively and bright in Edith Piaf’s “Non Je Ne Regrette Rien”. 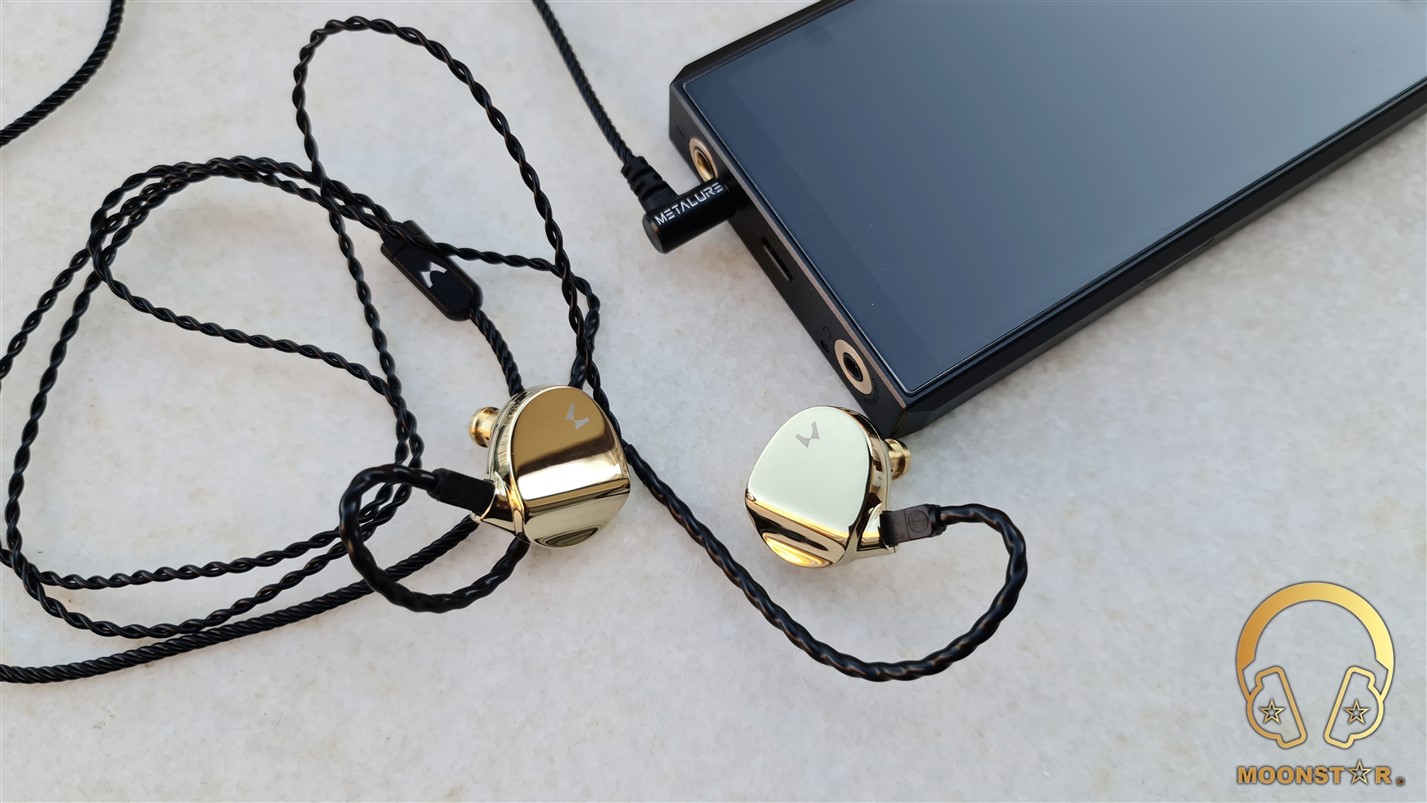 The upper midrange of the METALURE WAVE is quite pronounced thanks to a peak around the 3 kHz region. The WAVE offers a good sense of detailed and controlled in this area when I do listen to instruments like guitars or cymbals in songs like Lunatic Soul’s “The Passage”, Megadeth’s “Sweating Bullets” or Rush’s “Leave That Thing Alone”. Instruments like violins or side flutes are reproduced with a moderate level of emphasis and extension that do sound smooth and lush in tonality.

The METALURE WAVE offers a mildly bright, smooth and fatigue-free treble presentation.  The lower treble region of the WAVE is more highlighted a detailed compared to the upper treble area that shows a controlled yet noticeable roll-off.

The lower treble range shows a nice sense of clarity and definition, while the extension is on a pretty good level. The upper treble region on the other hand has a moderate performance in terms of extension and sharpness.

Instruments like cymbals in jazz or metal music are nicely pronounced, while the hits are countable. Crash cymbals do sound pretty fast and do shows a controlled extension. There are no remarkable interferences in moments when instrument like a piano accelerates.

The general treble presentation of the WAVE can be described as silky smooth and highly fatigue free, while the detailed retrieval and sense of airiness and sparkle is on a moderate level. 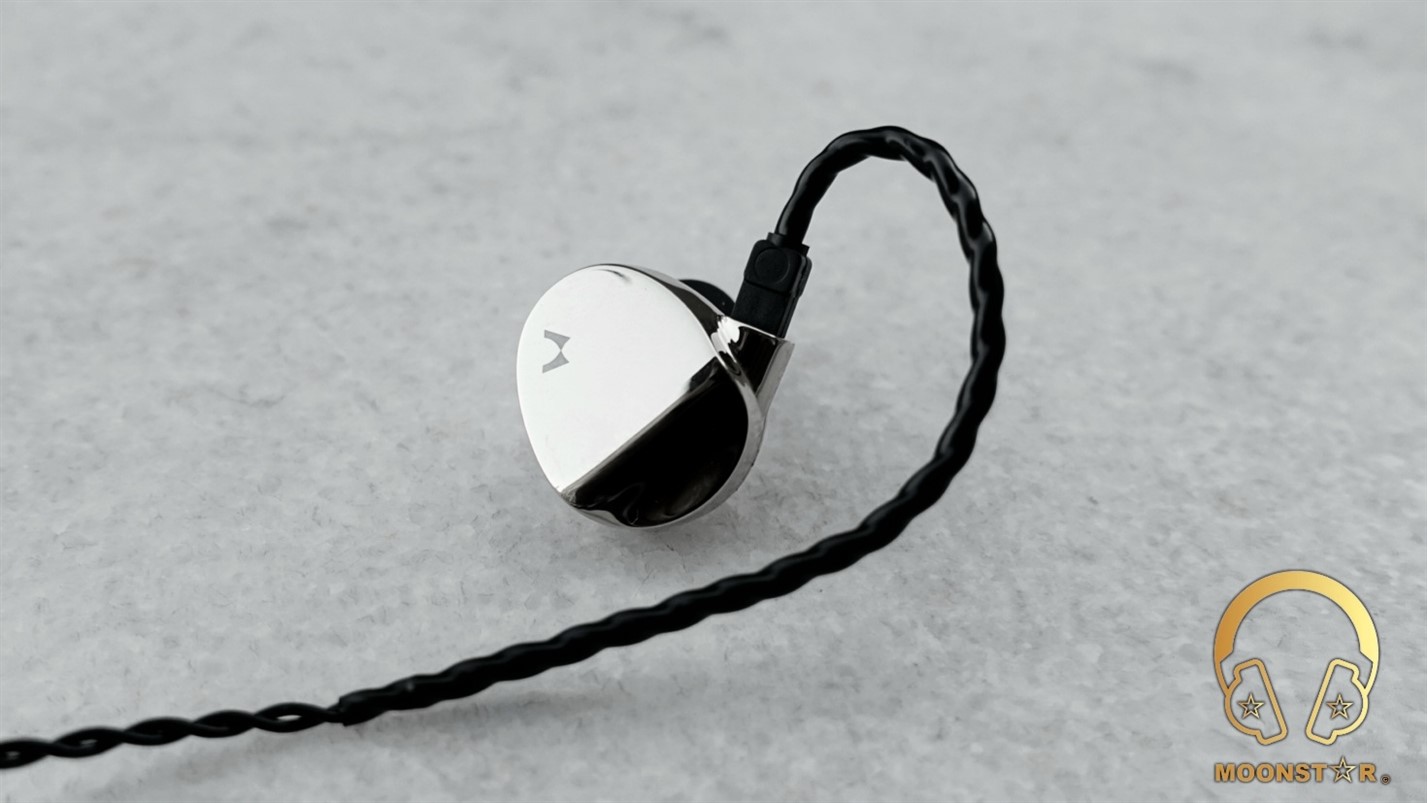 The METALURE WAVE shows a pretty good performance in terms of separation and placement of instrument and the vocals. The soundstage shows a nice sense of space with an above average wideness and moderate level of depth.

METALURE WAVE vs FINAL AUDIO B1:

Both the FINAL AUDIO B1 and METALURE WAVE do feature a shiny metal housing in gold (WAVE) or rose gold (B1) color and are available, while the sound is not that similar that I will analyze for you bellow. 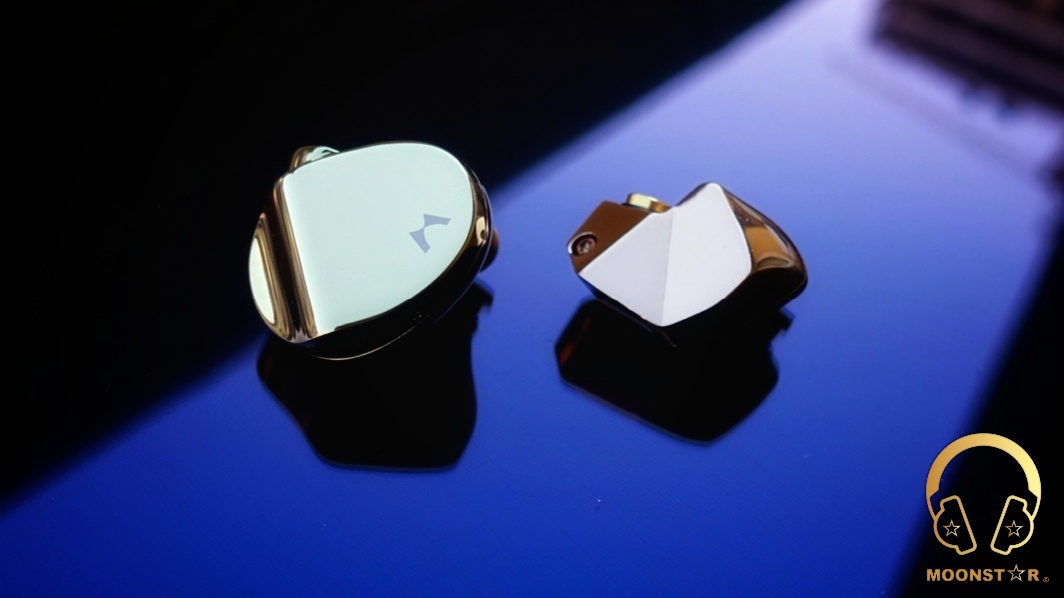 The midrange of FINAL AUDIO B1 shows a slightly more neutral and bright tonality, compared to the METALURE WAVE that has a warmer and more musical character. The lower midrange of both the B1 and the WAVE has good depth and body that’s makes them suitable for male vocals. The upper midrange of the WAVE sounds slightly fuller and smother than those of the B1 that has les body and but a higher sense of clarity and airlines in this area. Female voices do sound detailed with both In-Ear Monitors, while the WAVE offers a more emotional/intimate vocal presentation.

Both IEM’s are successful in terms of soundstage performance, while the FINAL AUDIO B1 has the slightly edge for both depth and wideness. 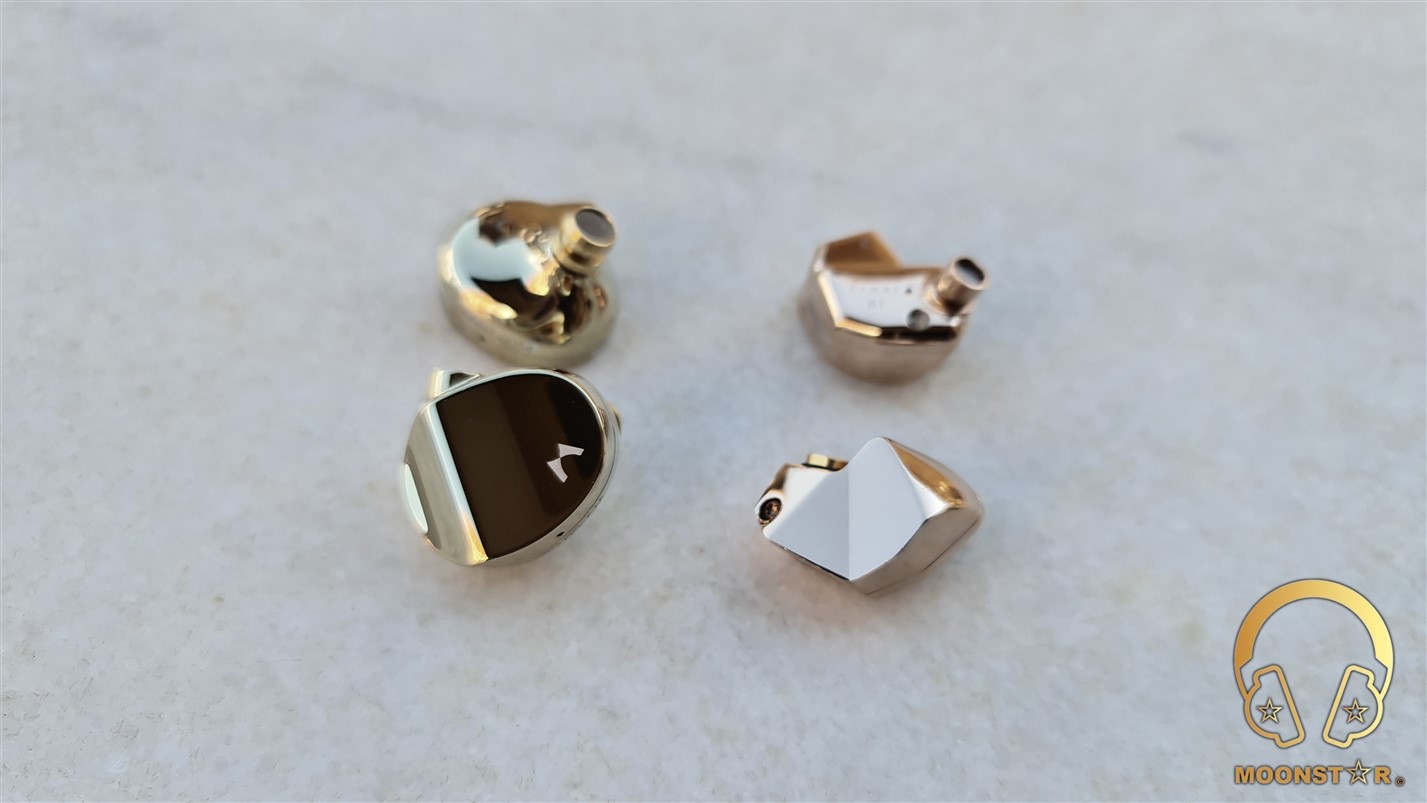 The METALURE WAVE is rock solid In-Ear Monitor with nicely tuned warmish tonality that offers a great sense of dynamism and musicality thanks to its powerful and controlled bass response, full bodied and lush midrange, and a treble tuning that is silky smooth yet detailed presentation.