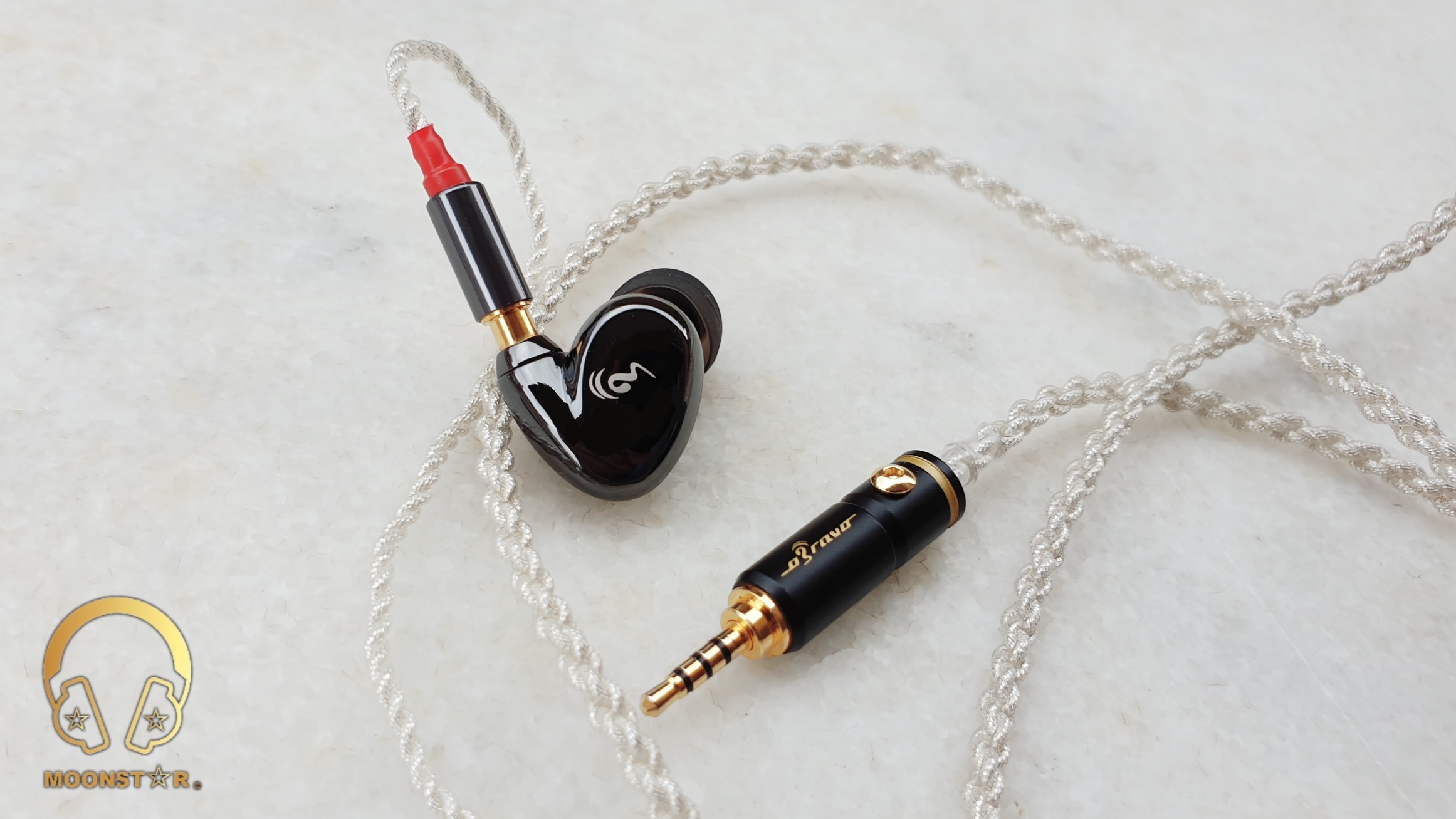 oBravo is a Taiwanese high-end earphone brand founded by David in 2006, dedicated to the research and development of audio systems. Professionally focusing on technological advances in audio speakers, computer speakers and Apple™ accessories.

“Listening to music is enjoying the journey, the audio system is merely a tool to do it with”.

The Cupid has been introduced as oBravo’s entry level offering for an economical price compared to other products of the company. The Cupid utilizing oBravo’s patented 8mm planar tweeter alongside a 6mm diameter neodymium dynamic driver. The Ultimate Edition of Cupid which I will now review for you contains the 3.5mm adapter alongside a 2.5mm to 4.4mm Pentaconn adapter.

I would like to thank oBravo for providing me the Cupid sample for review purposes. I am not affiliated with oBravo beyond this review and these words reflect my true and unaltered opinions about the product.

The price of the oBravo Cupid IEM depends on the content (adaptors, cable etc.) that is included to the packaging and varies between £169.00 and £299.00 while the Ultimate Edition that I will now review for you has the richest accessory pack.

You can find the list of oBravo Partners under the link below;

The oBarvo Cupid Ultimate Edition came in a square box with the illustration of the Cupid on the top and some technical details about the product at the rear part. 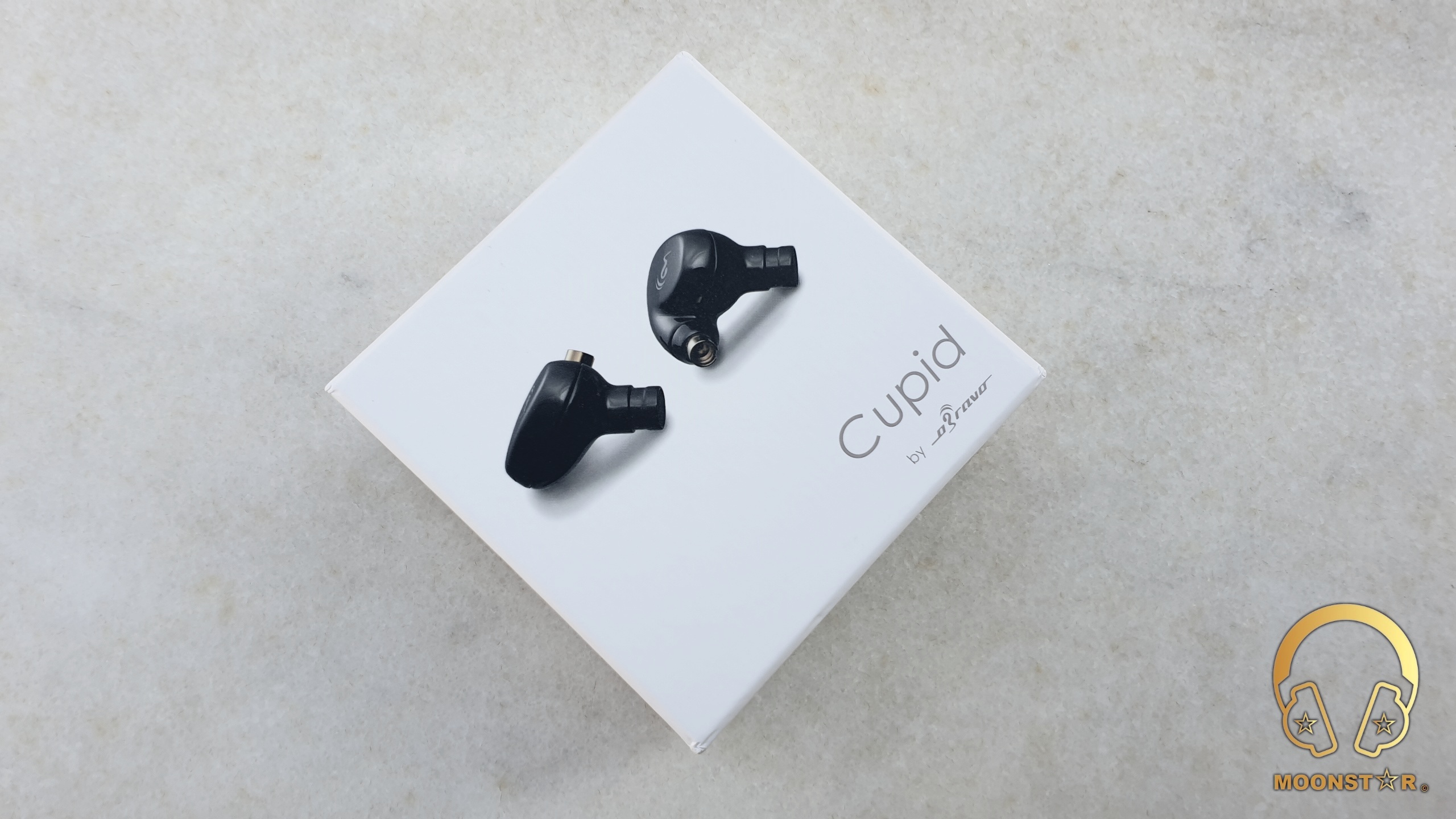 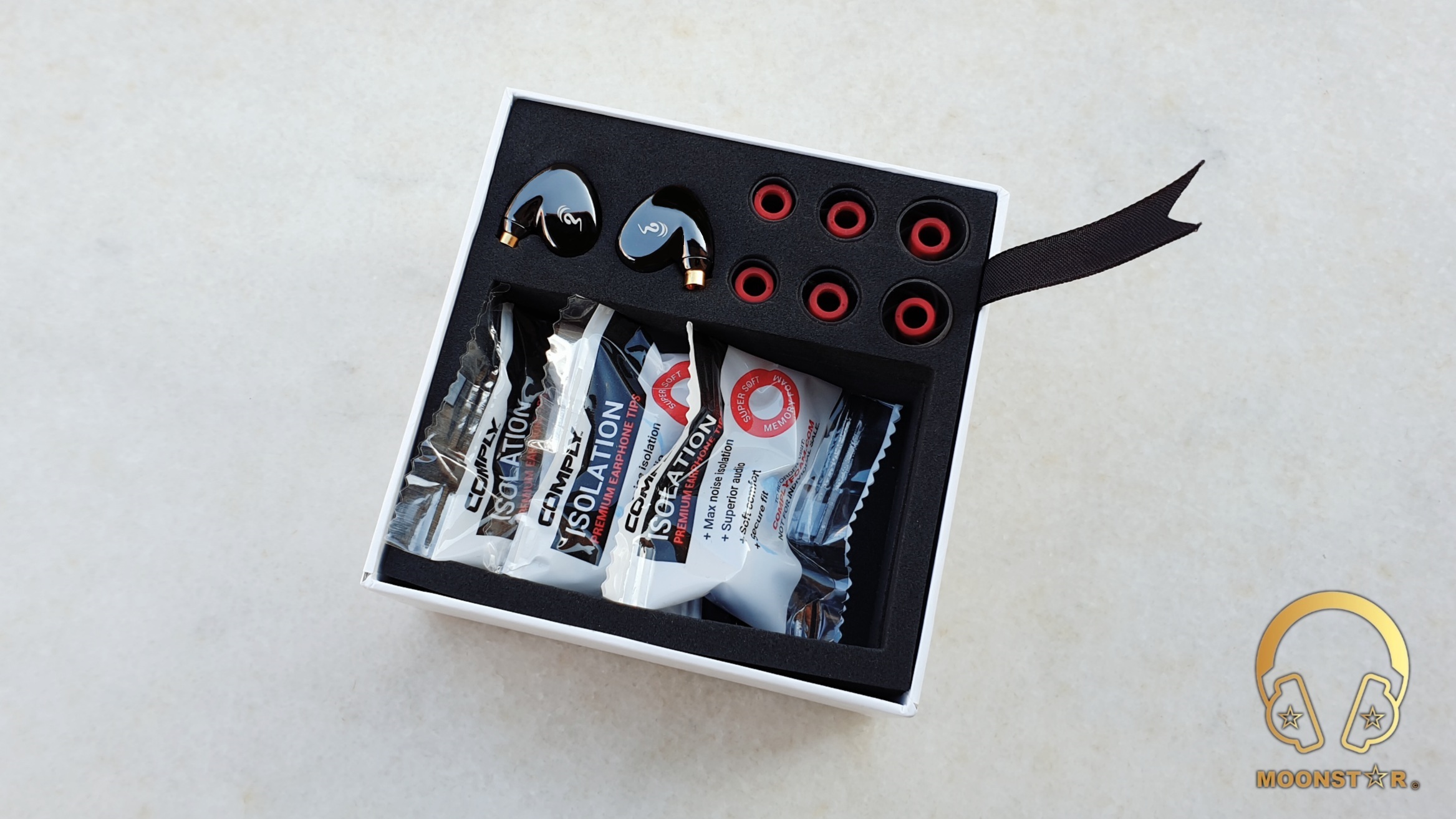 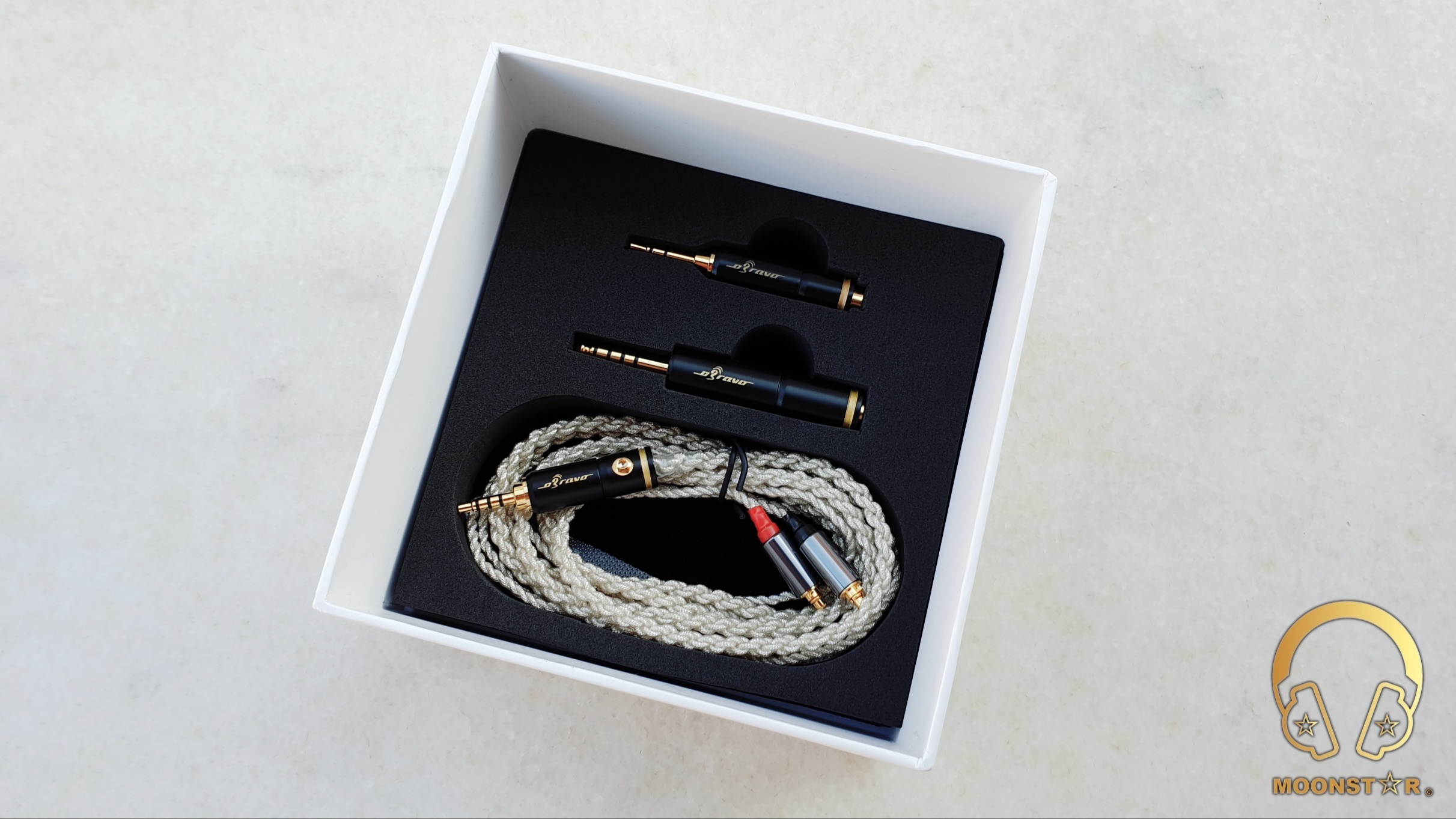 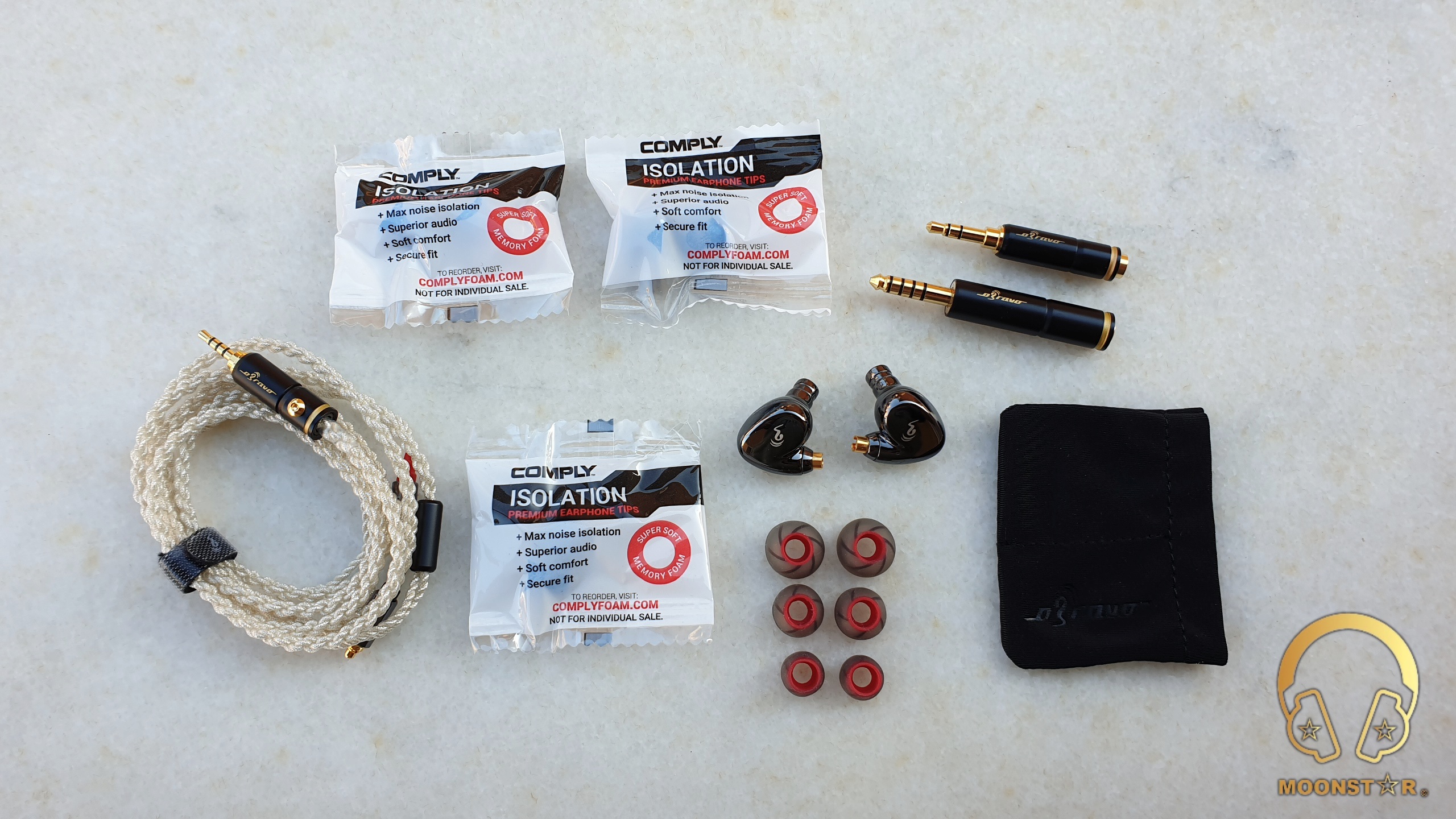 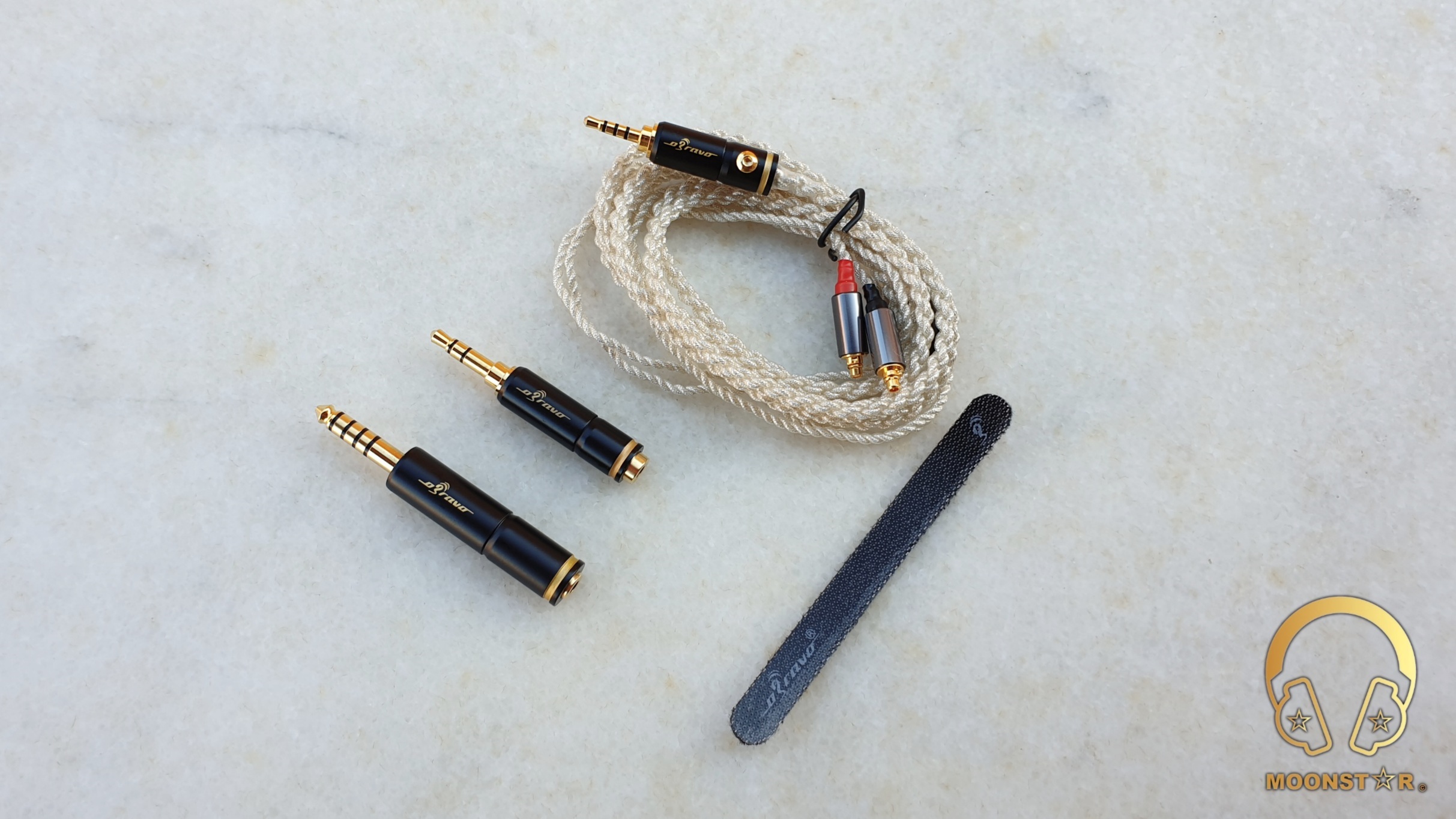 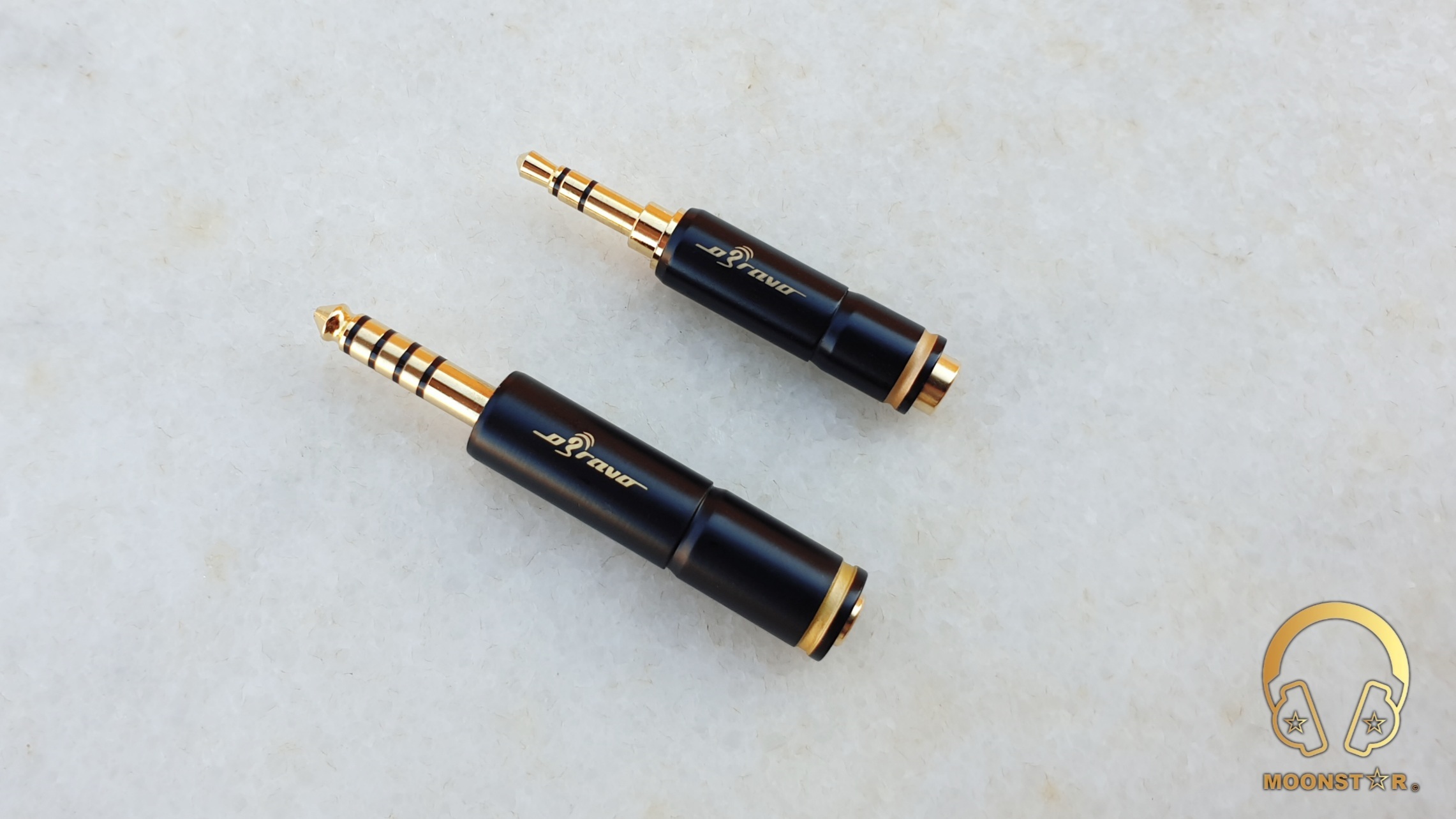 The oBravo Cupid has a monitor shell with a rounded shape which is made of brass material with an electroplated shiny gold black coating. The build quality of the monitor is rock solid and has a very ergonomic shape. 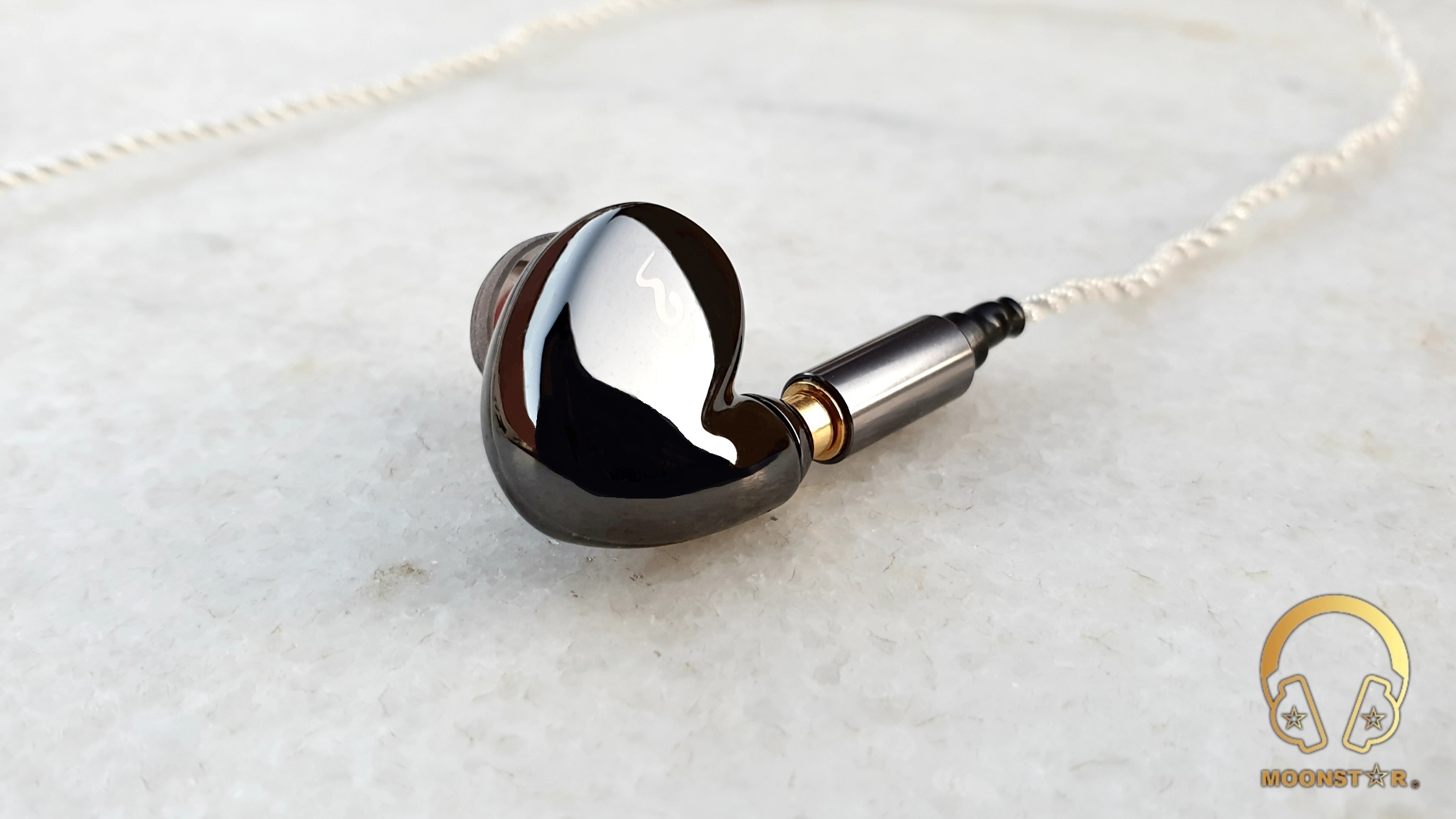 On the front of the monitor shell that we describe as faceplate is the oBravo brand logo which is in white color. 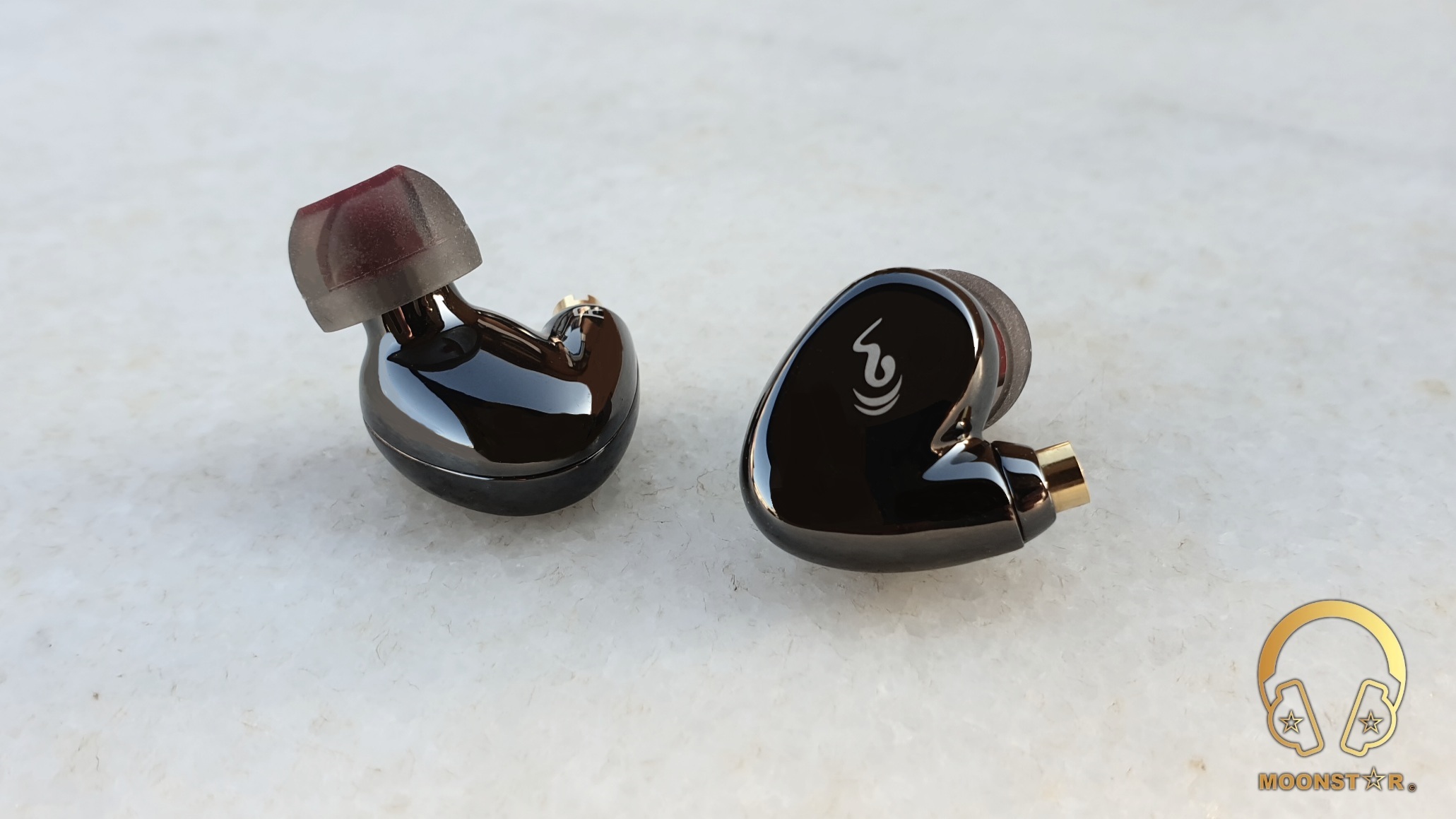 The rear side of the monitor shell sport the slightly angled sound nozzle with a metal mesh on the top that should prevent the insertion of unwanted particles like dust, ear wax etc. 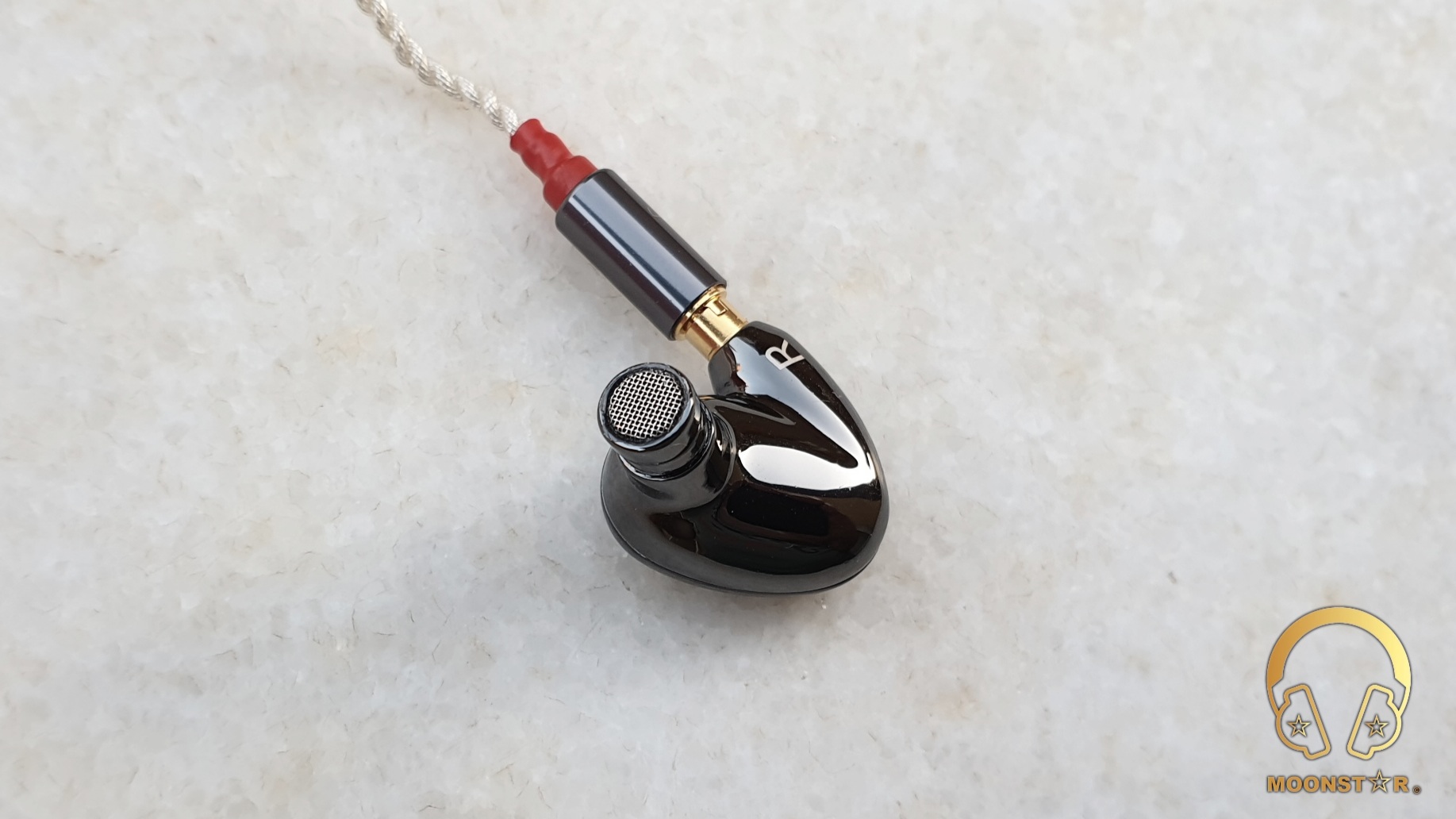 On the top of the monitor shell is the oB-MMCX female connector, which is a special type of connector solution that is that is more robust than regular MMCX connector thanks to a small fixation slot. 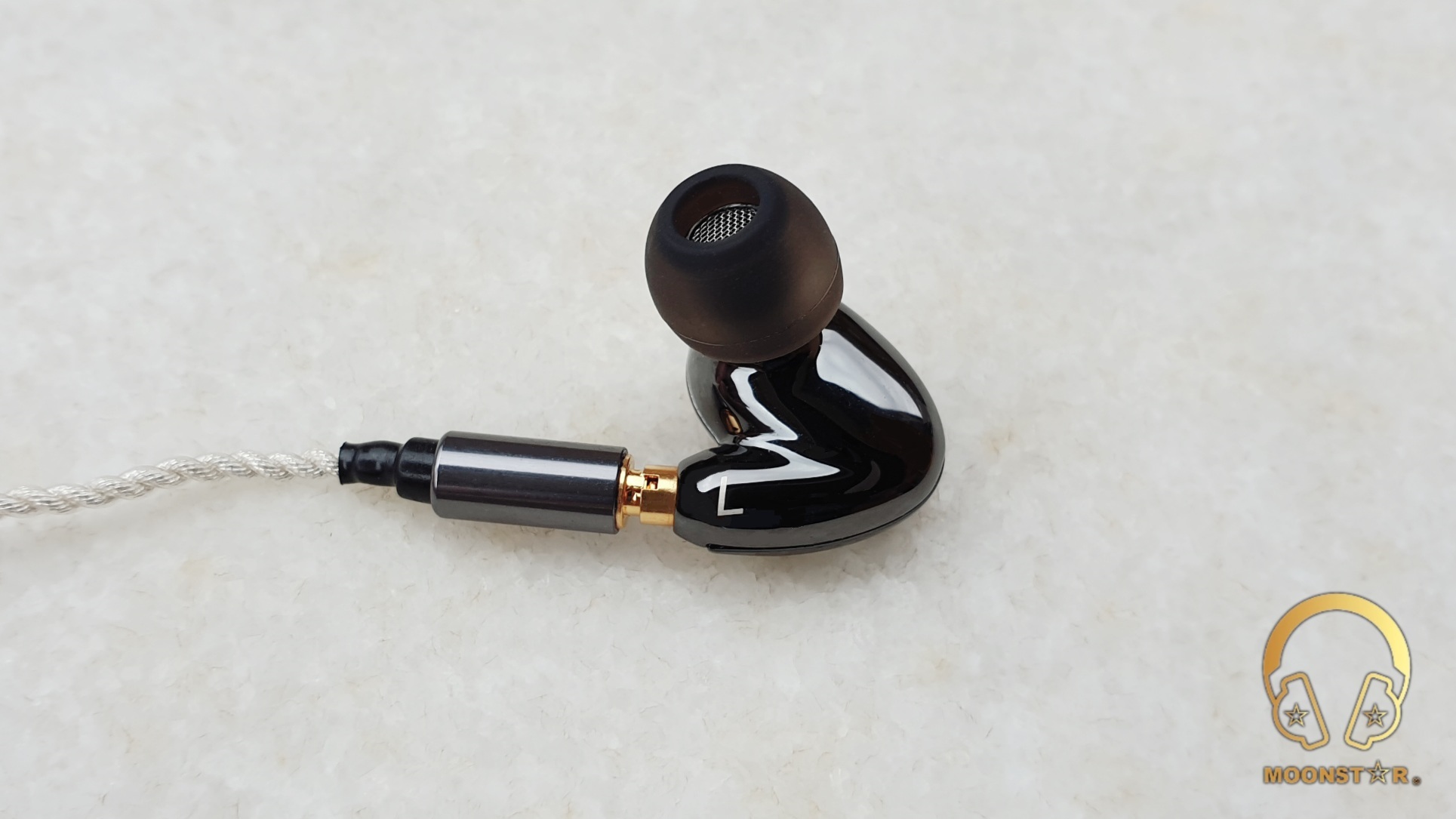 The disadvantages of this connector is the compatibility with regular MMCX connectors.  Near the elevated oB-MMCX connector which is in gold color are the left (L) and Right (R) markings. 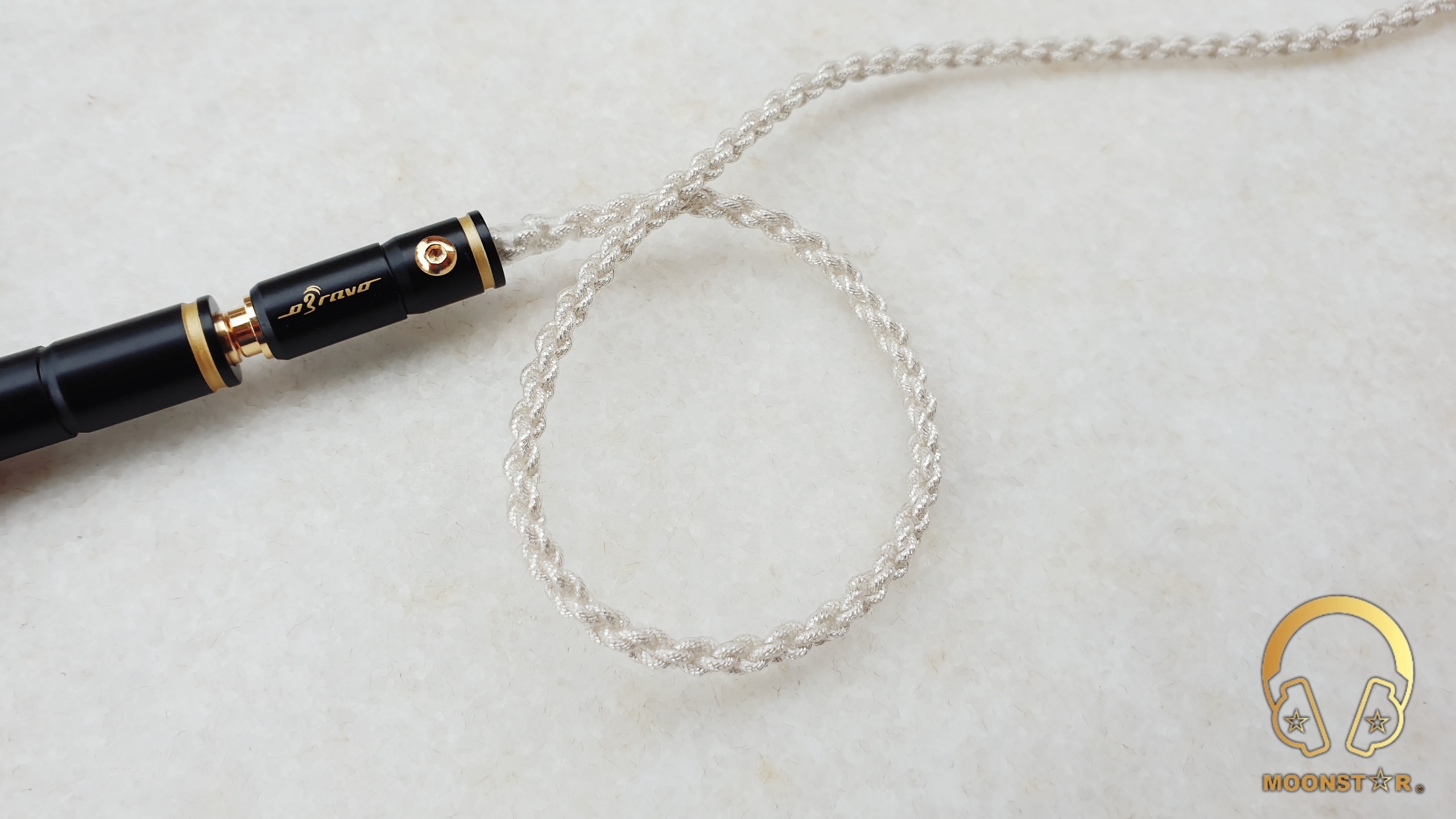 The housing of the headphone jack is made of metal in black color and features the oBravo Brand Logo and a fixation screw in gold color that gives the housing a nice premium look and feel. 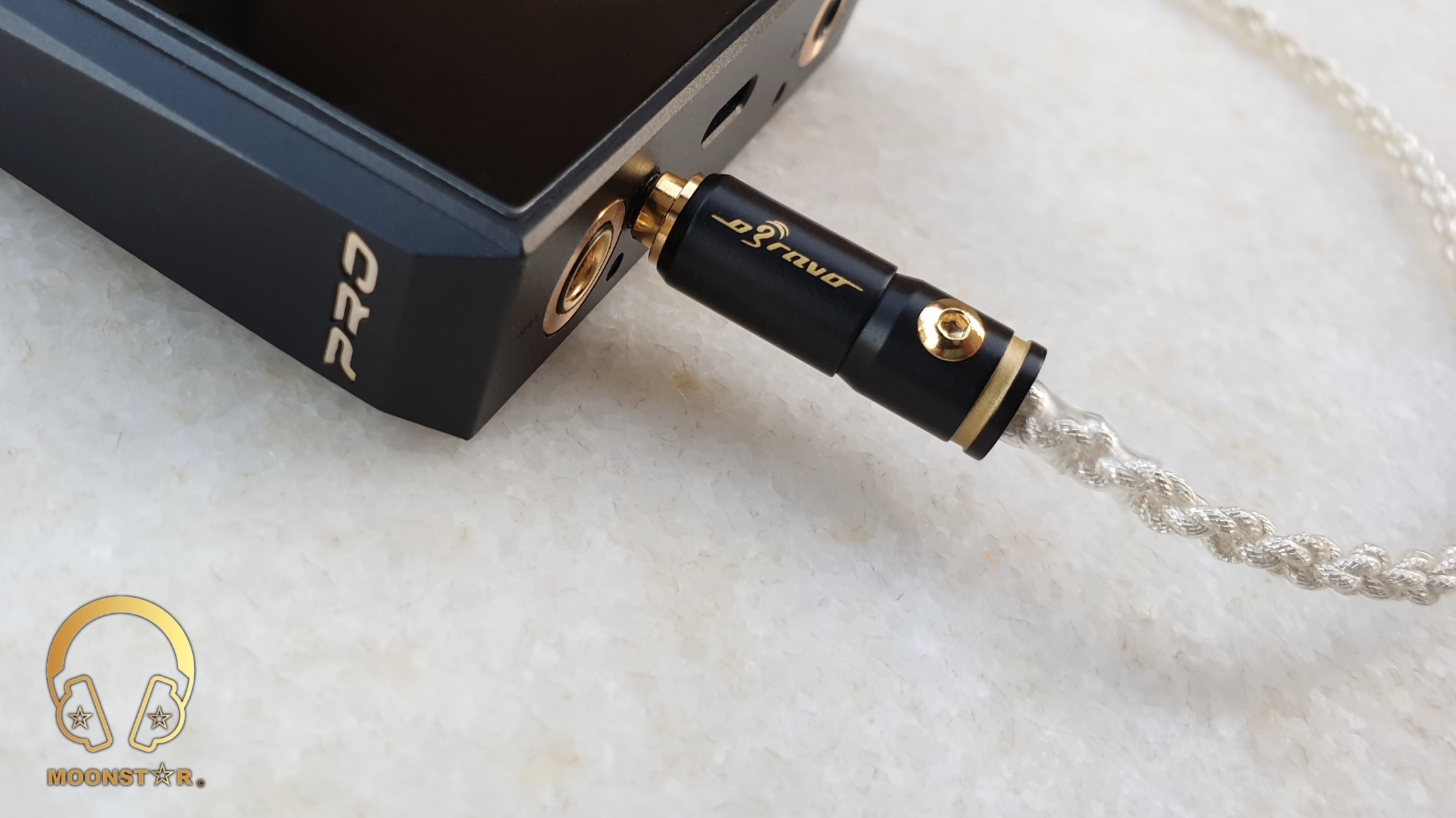 The cable sports a metal Y splitter with oBravo branding made metal material in black color. 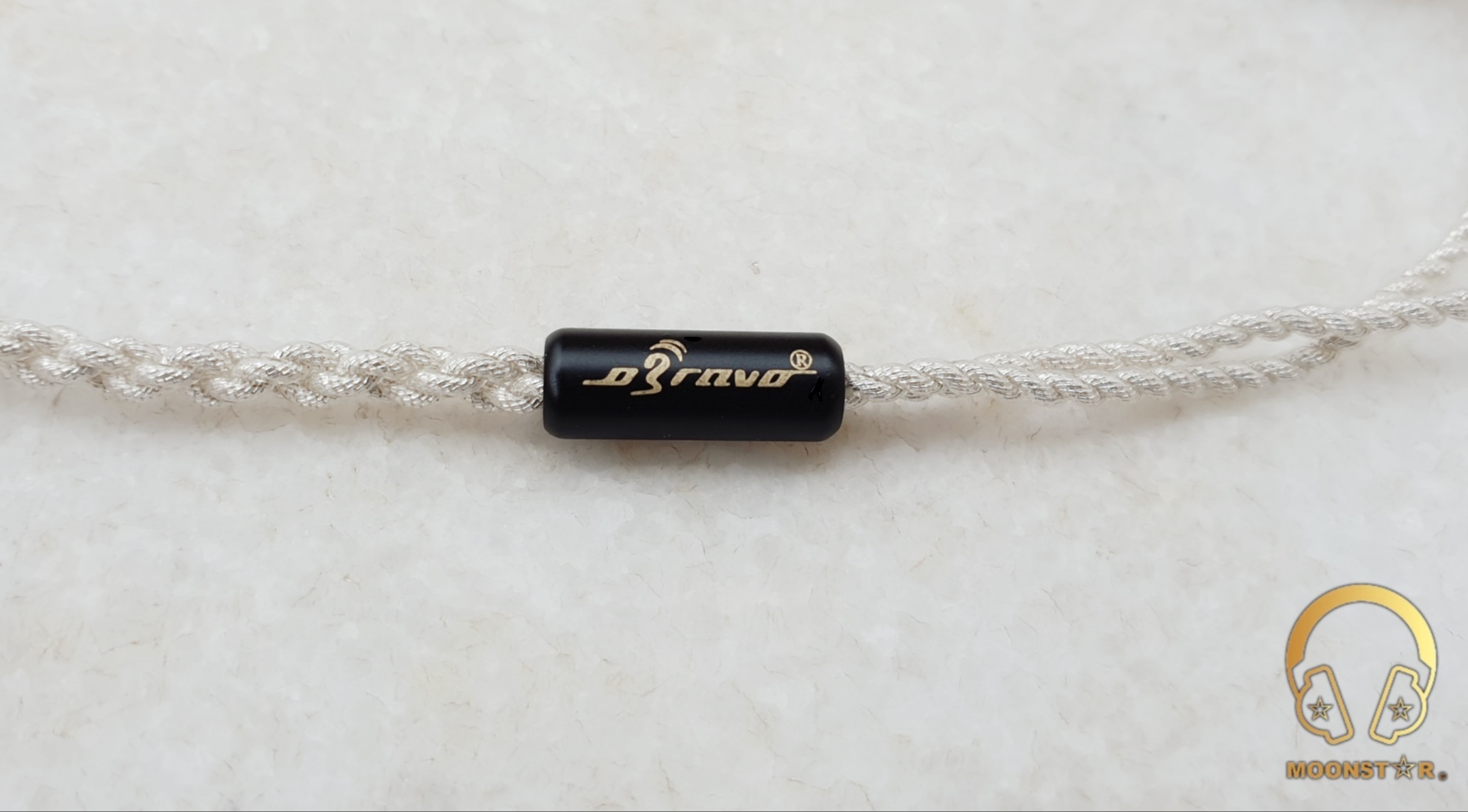 The overall build quality of both the cable and the monitor is on a very high level!

The monitor shell of the oBravo Cupid has a very ergonomic shape that fits perfect to my average sized ears and didn’t hurt my ear concha even after long listening periods. The isolation with the Medium sized stock silicone tips was better than I have expected that proofs that a long nozzle is also an important key for a good isolation.

The oBravo Cupid is a relative easy to drive IEM with a pretty low impedance of 16Ω and a sensitivity of 105dB. My Samsung Galaxy S9 Plus and iPad Air2 was able to drive it to pretty high volume levels, but I would advise to pair it with a more powerful source like a DAP, DAC or Portable Amplifier to hear the true potential. 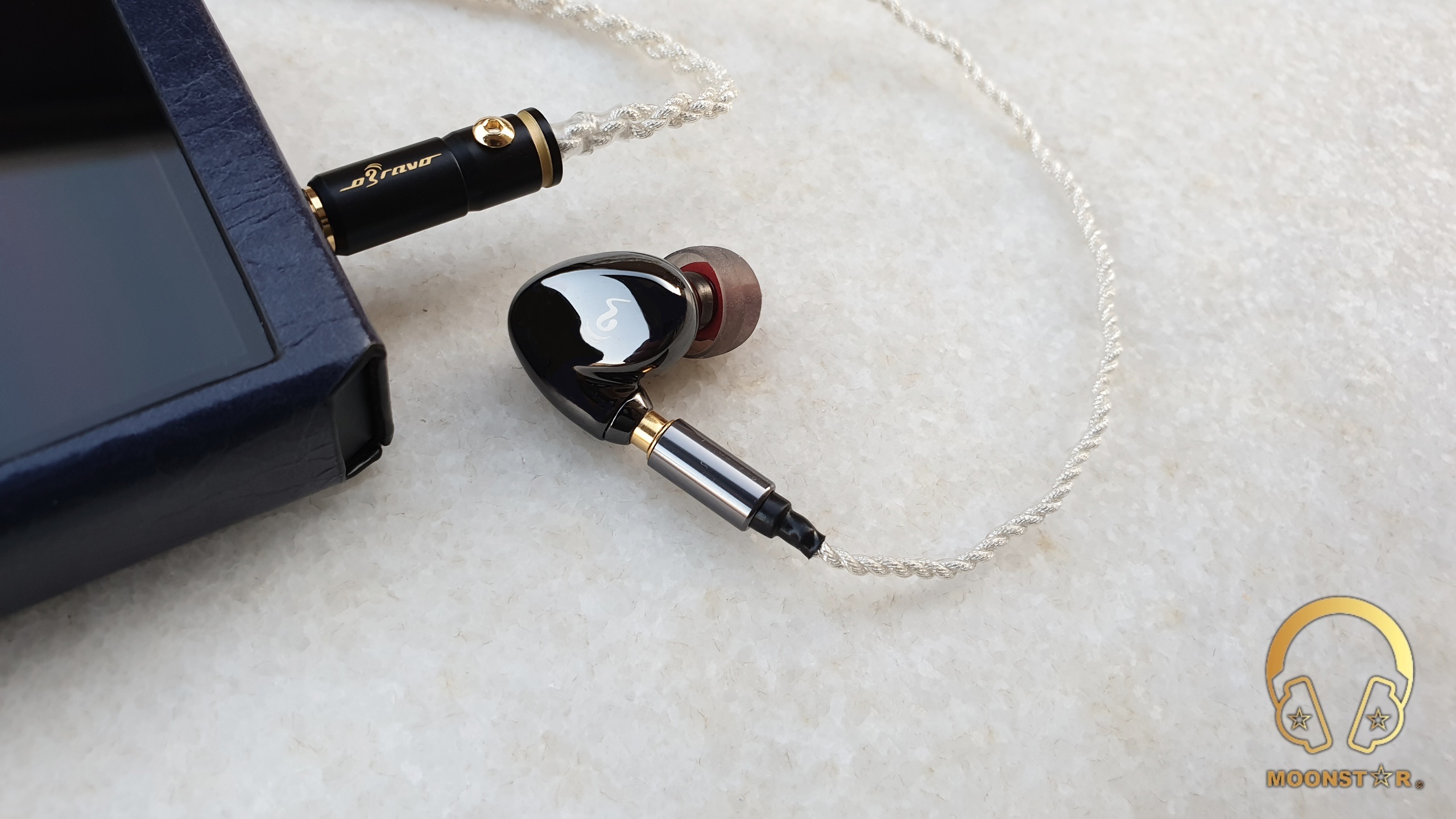 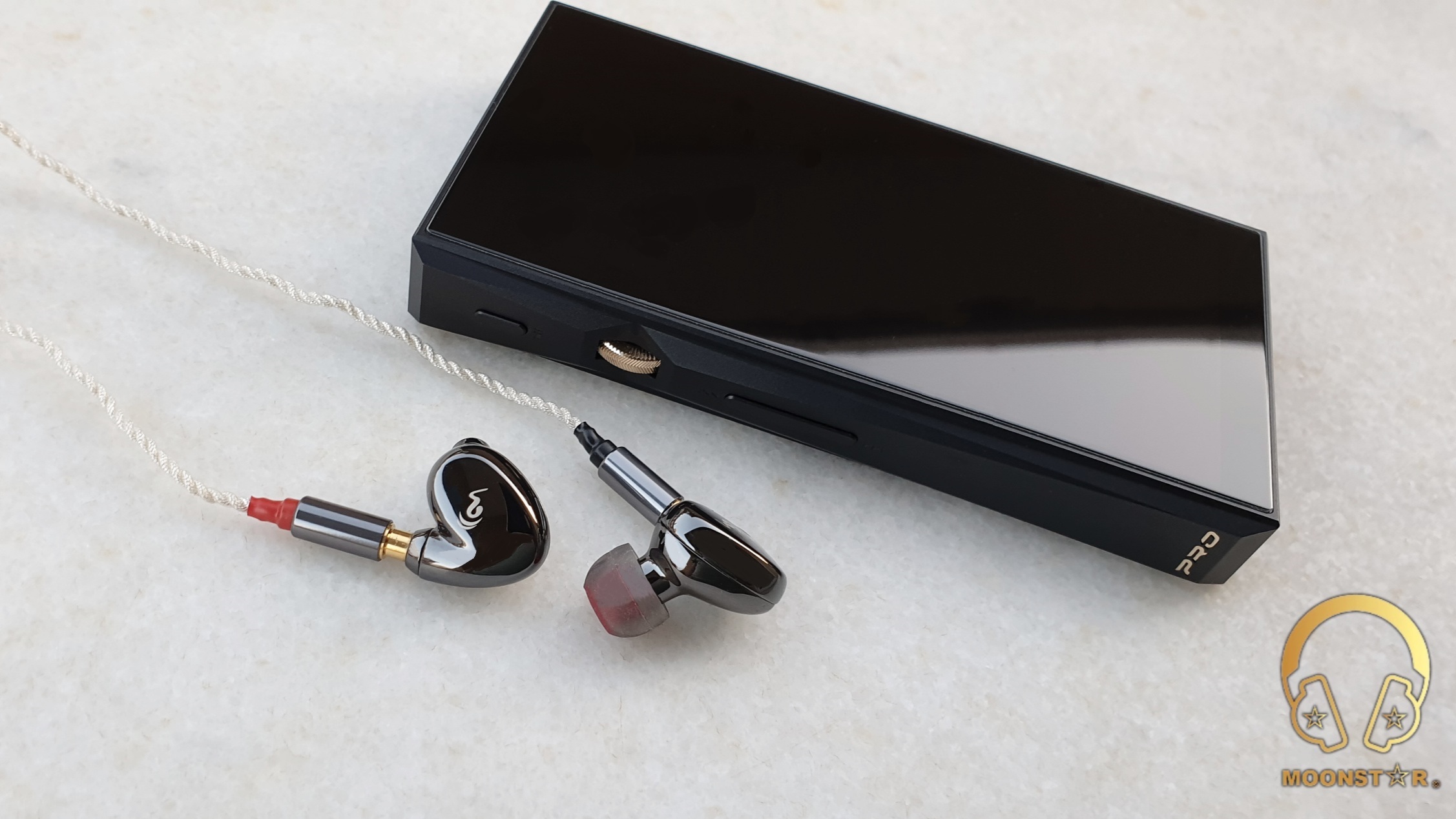 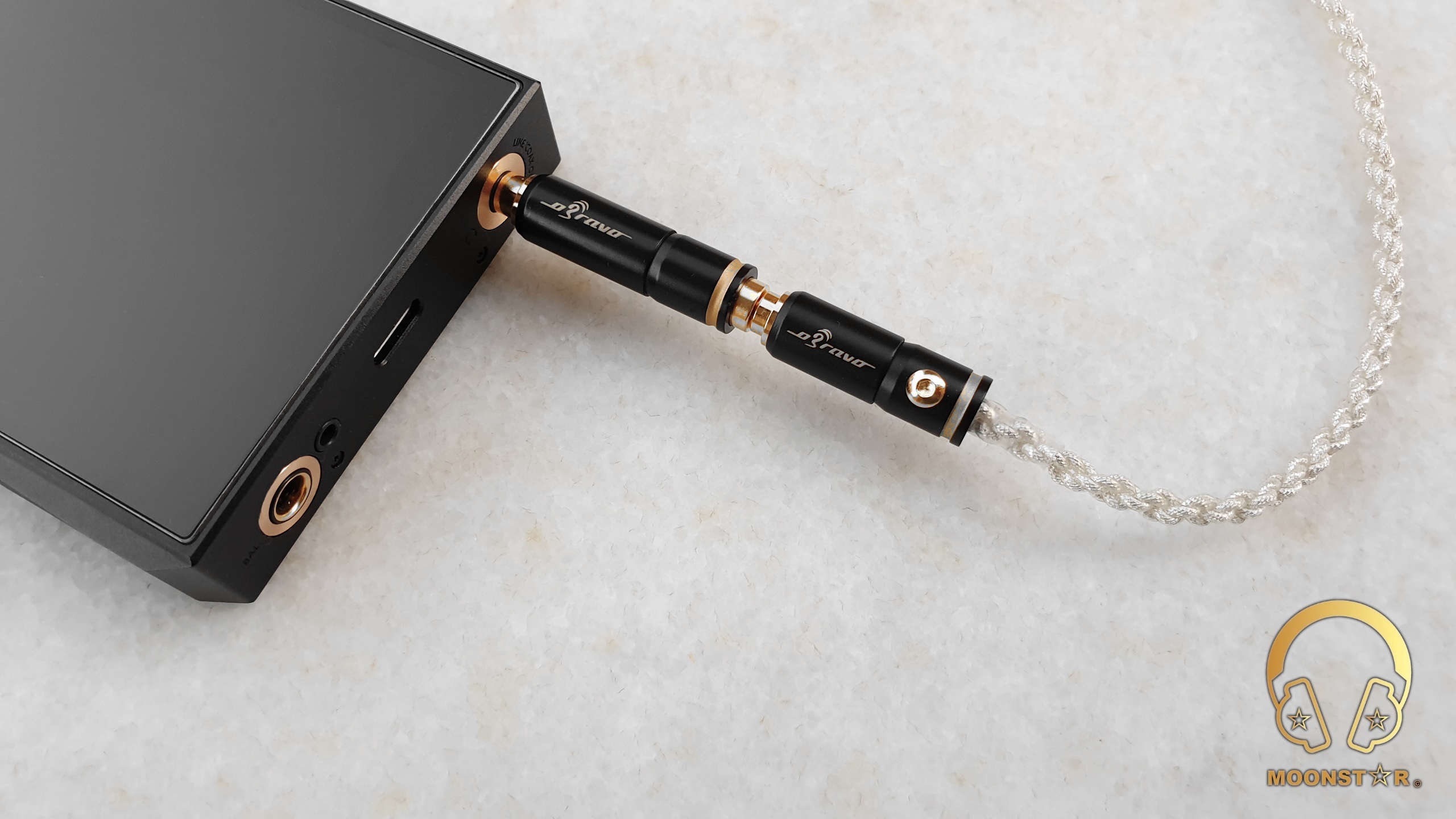 oBarvo offers with the Cupid IEM a with a vivid/lively tonality that has a nice touch of warmness. The bass is tight and impactful, while the midrange sounds transparent and musical and the treble range with great extension thanks to the use of a dynamic driver for the lows and lower midrange and a planar magnetic tweeter for the rest of the sound spectrum.

Please note that I have burn-in the oBravo Cupid for about 80 hours and that I have used the stock silicone ear tips which do affect the overall timber dramatically and do offer the best sound experience in my opinion. You should also note that the Cupid is maybe easy to drive and that it sound pretty loud with relative weak sources like a Smartphone or Tablet, but that it shows its true potential paired with portable devices such like a DAP’s, DAC/AMP’s or Amplifier.

The oBravo Cupid shows a good amount of subbass depth, quantity and extension, while the rumble and quantity is maybe not for hardcore bass-head’s but it should be quite enough for most listeners. The subbass region has a soft and fairly warm tonality, while the feel of rumble and the overall control is pretty exciting.

The subbass character was very pleasant with genres like EDM, Epic Music, Pop, etc. and shows a good performance with tracks like Audiomachine’s “Legends of Destiny”, Massive Attack’s “Angel” and Lorde’s “Royals”.

When it comes to the midbass region of the oBravo Cupid I can say that it has a tight, pretty fast character and above average intensity. Instruments such like trumpets or cross drums do sound fairly accented, soft and warmish in tonality. The bass performance in terms of decay was pretty good with instruments like bass guitars or violas that do fade in a quite natural way.

The general bass response of the oBravo Cupid is fast and controlled, while the resolution and overall depth/intensity is pretty good for such a small dynamic driver with a diameter of only 6mm. 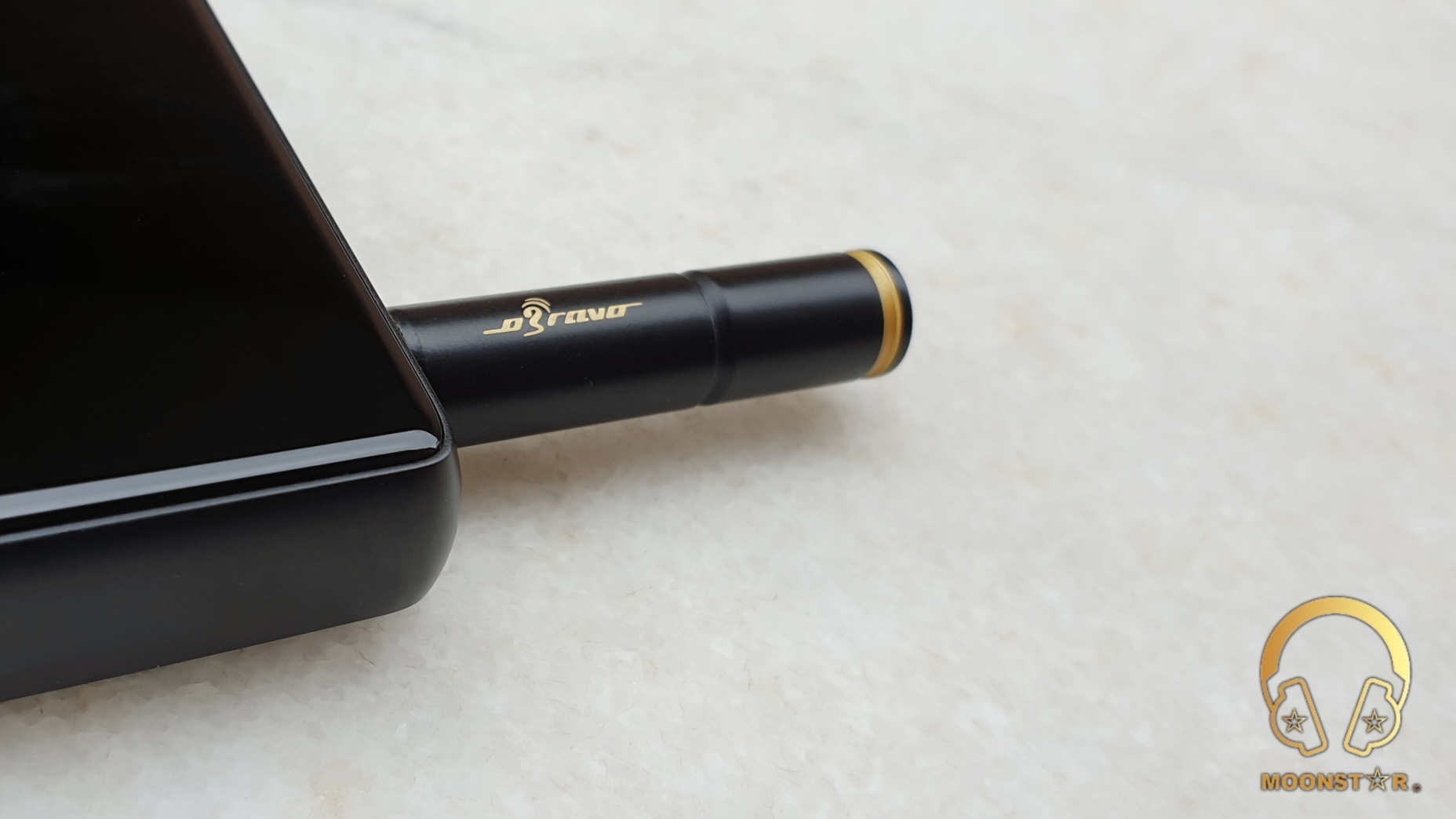 The midrange of the oBravo Cupid has a warmer tonality but still pretty transparent, spacious and lively in its presentation.  Male vocals have a good depth, while female vocals are clear and pronounced. Instruments on the other hand do sound in general pretty musical and do shows a good level of clarity and airiness.

The lower midrange of the oBravo Cupid is in harmony with the bass and shows a pretty neutral, warmish tonality. The lower midrange sounds slightly more recessed compared to the upper midrange while it shows a good level of depth and detailed that makes male vocals like Dave Gahan, Eric Clapton or Elton John pleasant to listen to. 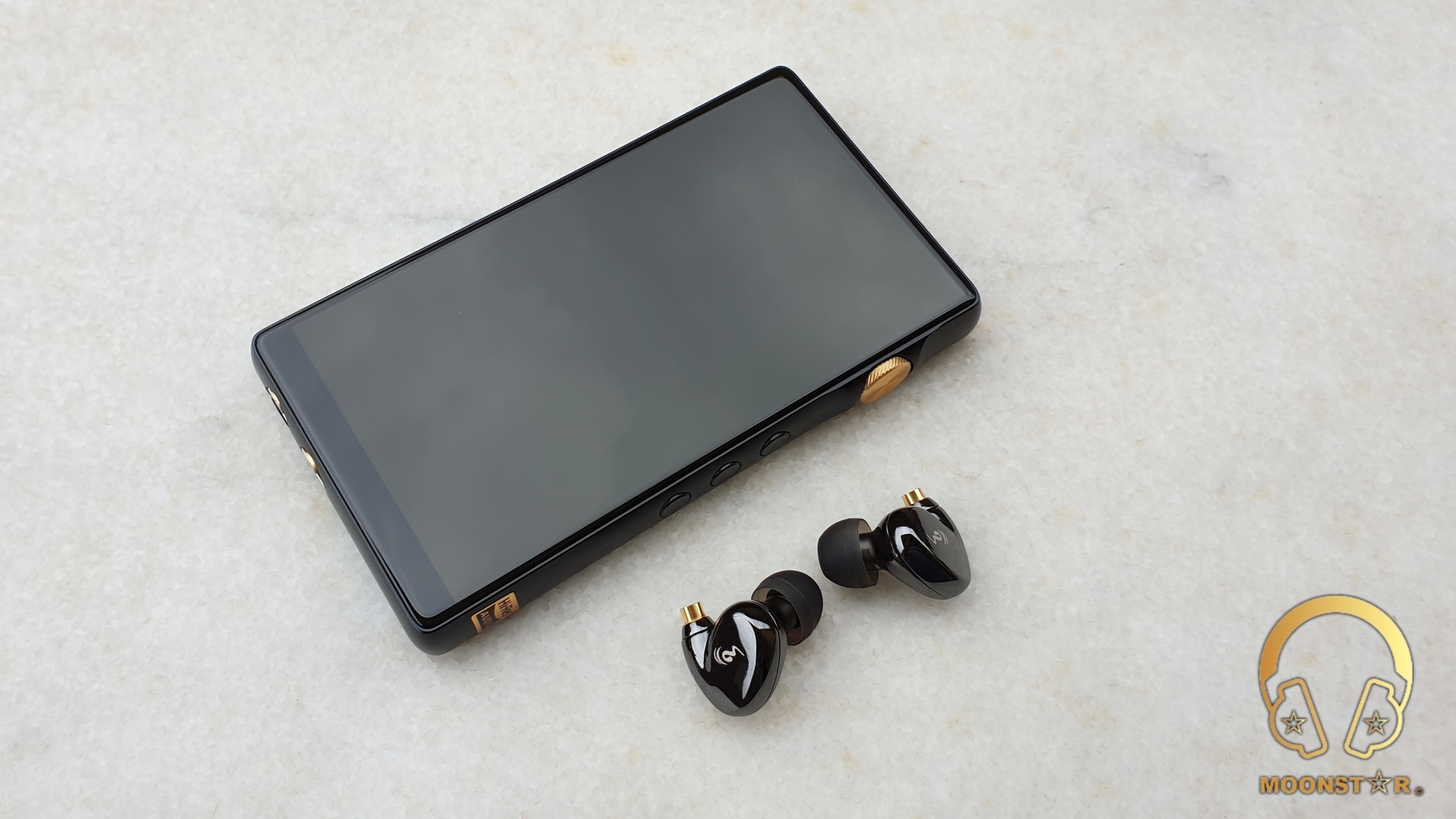 The instrument tonality of the oBravo Cupid is in general brighter than in normal and do sound detailed. Instruments like violins and piano notes have good extension, while they can sound a bit sharp in higher volumes. The general instrument presentation of the Cupid is fairly musical, lively, clean and transparent along with a good level of separation.

Other instruments like the contrabasses do have a good depth and the tractions of the bows do not sound too thick or dry. 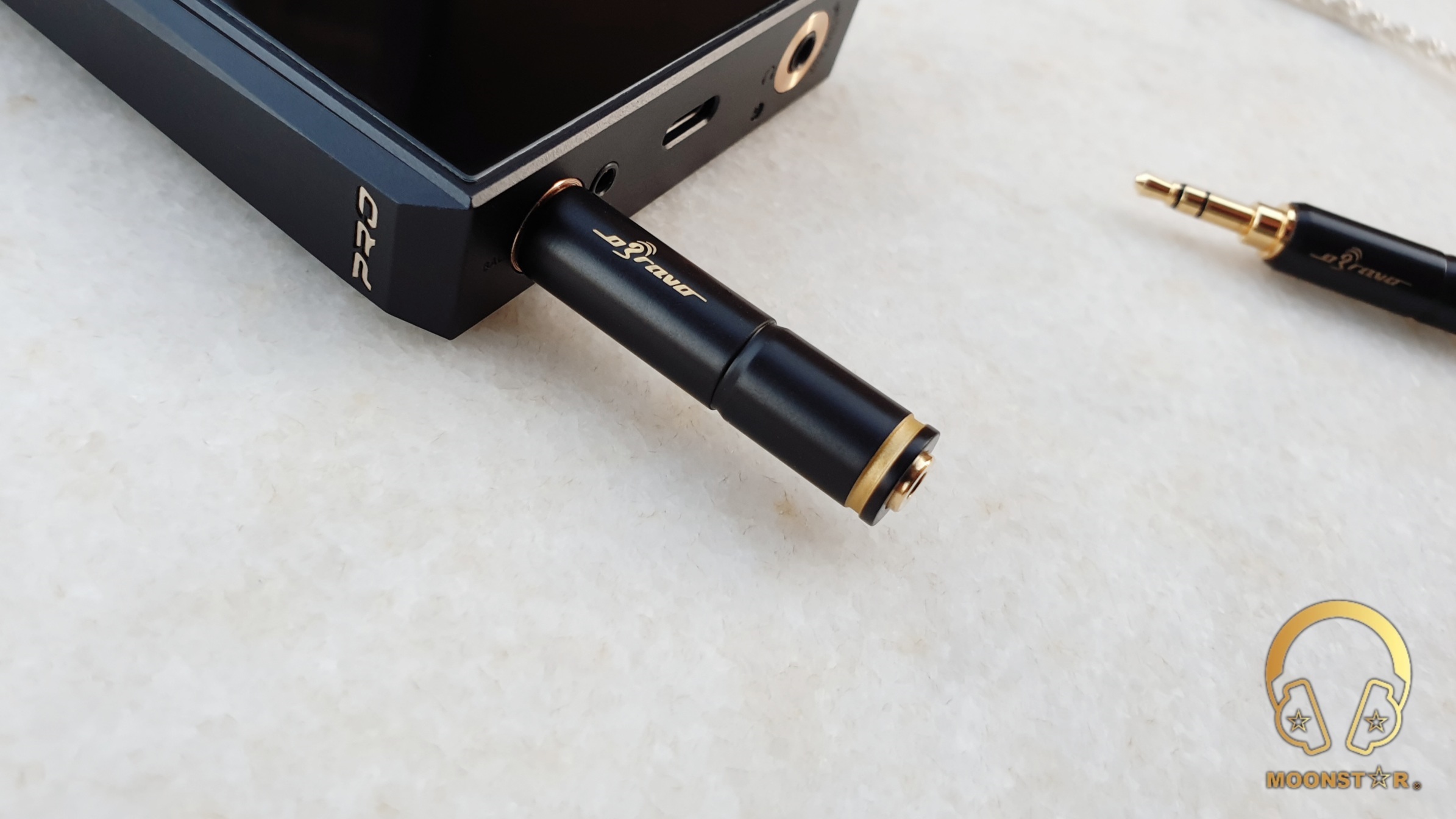 The upper midrange and lower treble range of the oBravo Cupid is highlighted with a peak around the 4 kHz which has a high effect of the overall sound timbre. The upper midrange of the Cupid is detailed, extends pretty well and sound fairly controlled after a good burn-in (approx. 80-100 hours) and with the use of the right ear tip which is the stock silicone one with a big opening.

The upper midrange and lower treble makes the overall presentation airy and lively, but can do sound a bit harsh while listen to violins pianos in higher notes.

The upper treble region is less detailed and the extension is in general short. Here is a noticeable roll-off that do avoid in most situation a possible treble harshness. The cutting in this range made the sound more distant and transparent. 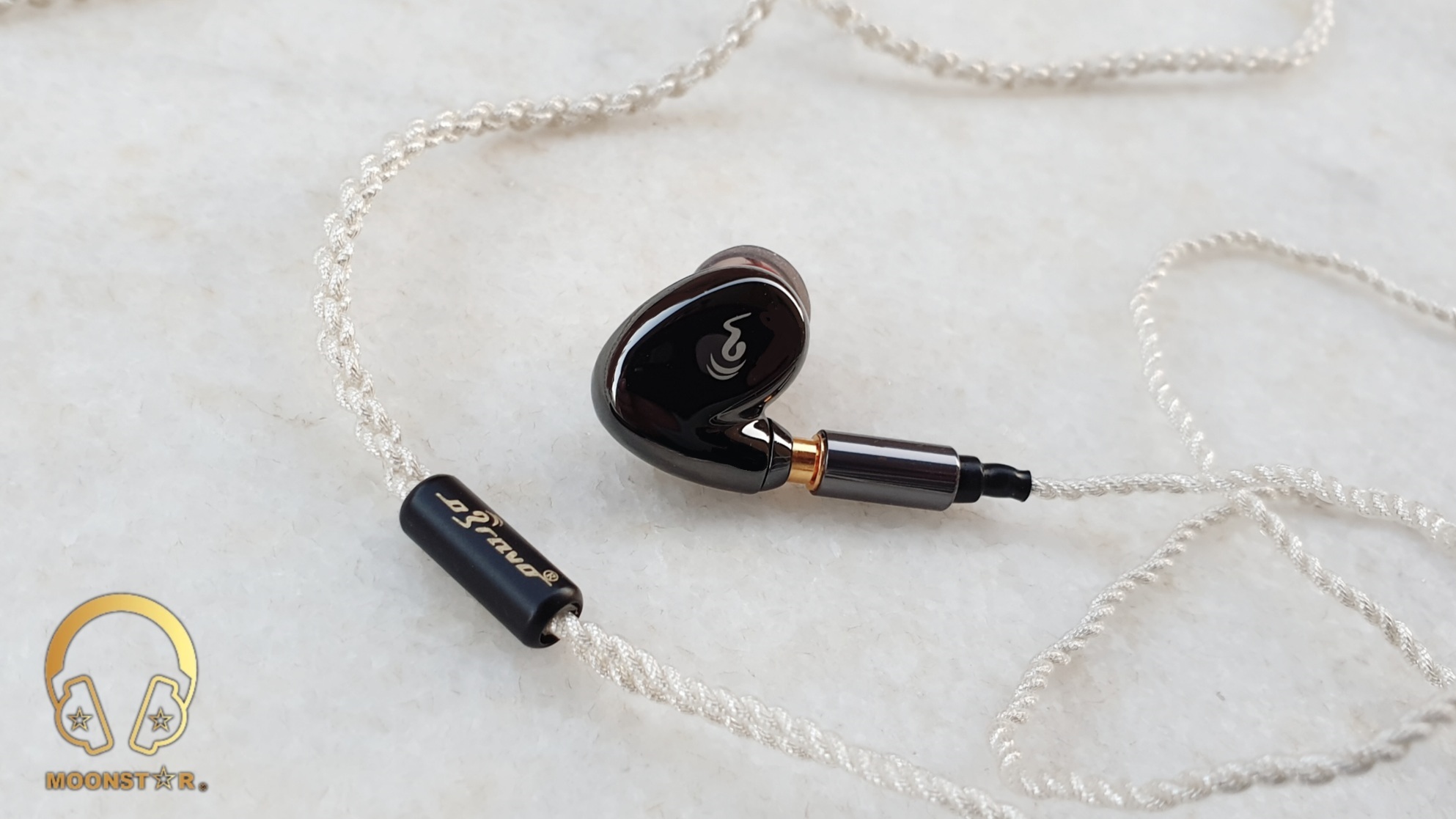 oBravo Cupid versus Final Audio B2:

Both IEM’s do have in general a warmer than neutral tonality while the Final Audio B2 shows a smoother and more mid forward presentation compared to the energetic and dynamic sound signature of the oBravo Cupid.

The Final Audio B2 has a more linear bass response with a hint of boost in the midbass region, while the oBravo Cupid shows more energy and dynamism which makes it more entertaining with a wide variety of genres.  The subbass of the Cupid has better depth and extension with compared to the fairly linear presentation of the B2. The oBravo Cupid is aslo superior when it comes to midbass impact and intensity and has also the upper hand in terms of resolution and layering.

The midrange of the Final Audio B2 is more highlighted and smooth and emotional compared to the oBravo Cupid which has a slightly recessed midrange that offers more clarity and higher level of airiness. Male vocals do have better depth and fullness with the Final B2 due to its lower midrange tuning, while the oBravo Cupid shows a slightly higher boost in the upper midrange area which is the reason why it has better detail retrieval with female vocals and instruments like flutes, violins and pianos.

The upper treble range of the oBravo Cupid is more pronounced than those of the Final Audio B2 and gives the overall presentation a better sense of e clarity and definition. The Final Audio on the other hand do offer slightly more intensity and extension in the center and upper treble region between 6 and 8 kHz that avoids a muddy presentation.

The soundstage of the oBravo Cupid is superior in terms of wideness and has also slightly better depth compared to the stage of the Final Audio B2. 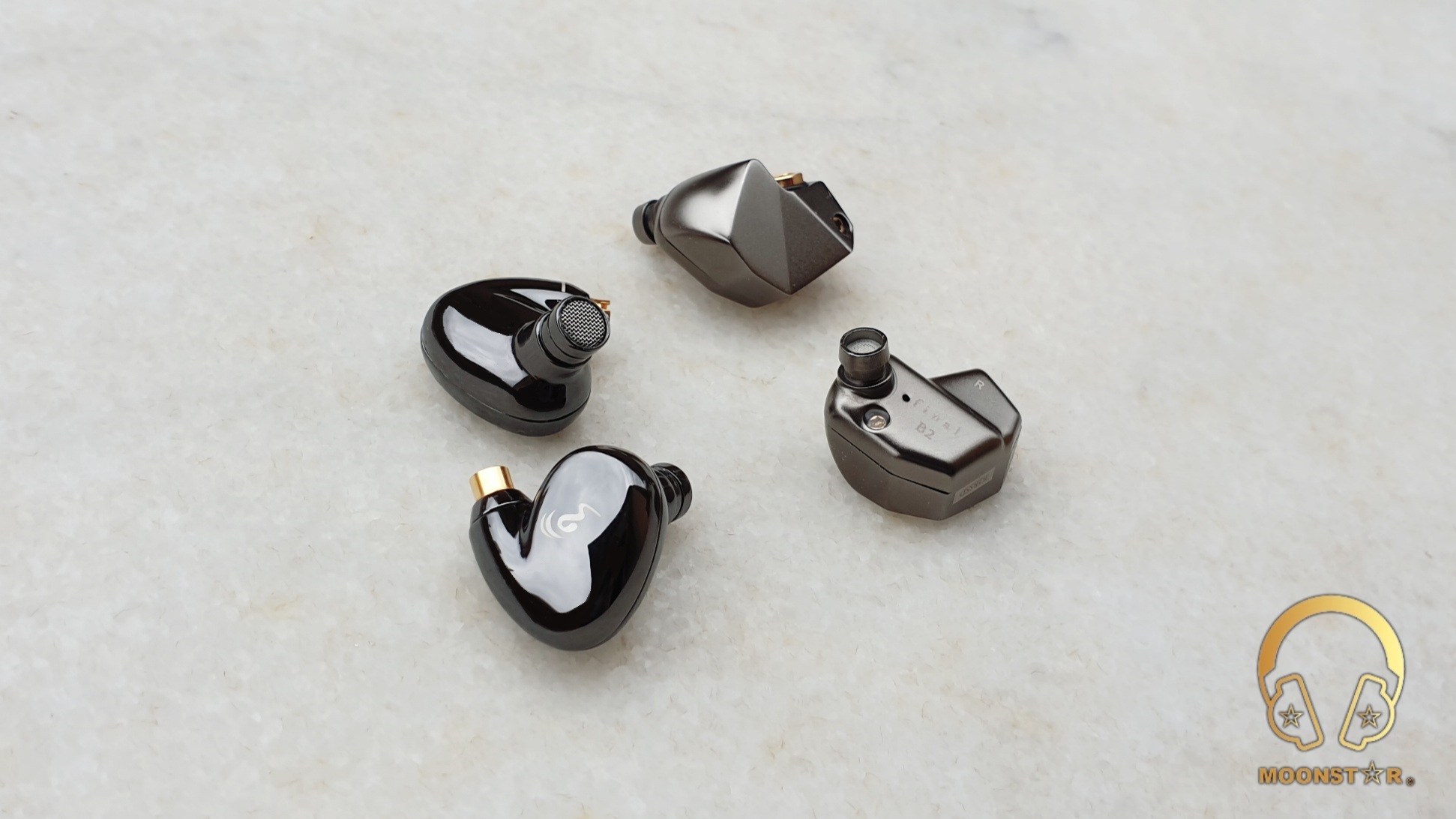 Both the oBravo Cupid and the Campfire Audio Comet do have a warm than neutral tonality. The Comet do sound more balanced and but shows some shortcomings due to the use of a single full range Balanced Armature driver which has its limits compared to the more sophisticated Driver configuration of the Cupid.

The subbass of the oBravo is superior in terms of depth and extension and offers also more rumble compared to the Campfire Audio Comet that has a linear bass response whit average depth and extension. The midbass of the Cupid shows also more impact, depth and resolution than those of the Comet which sounds slightly tighter and faster in this area thanks to the balanced armature driver.

The midrange of the Campfire Audio Comet is fairly forward in its presentation and shows an average level of clarity and airiness. The oBravo Cupid on the other hand, offers more airiness, clarity and detail retrieval thanks to the slightly higher boost in the upper midrange region.

The lower midrange of the Campfire Audio Comet shows better depth and extension, which makes it more suitable for Male vocals and more successful with instruments like acoustic guitars or trumpets, while the oBravo Cupid shows its strength when it comes to female vocal and instruments like violins, flutes and cymbals that do have better extension and sound more detail and transparent due to the upper midrange tuning.

The soundstage of both the Comet and the Cupid is successful in terms of wideness, while the oBravo Cupid has the upper hand in terms of soundstage depth. 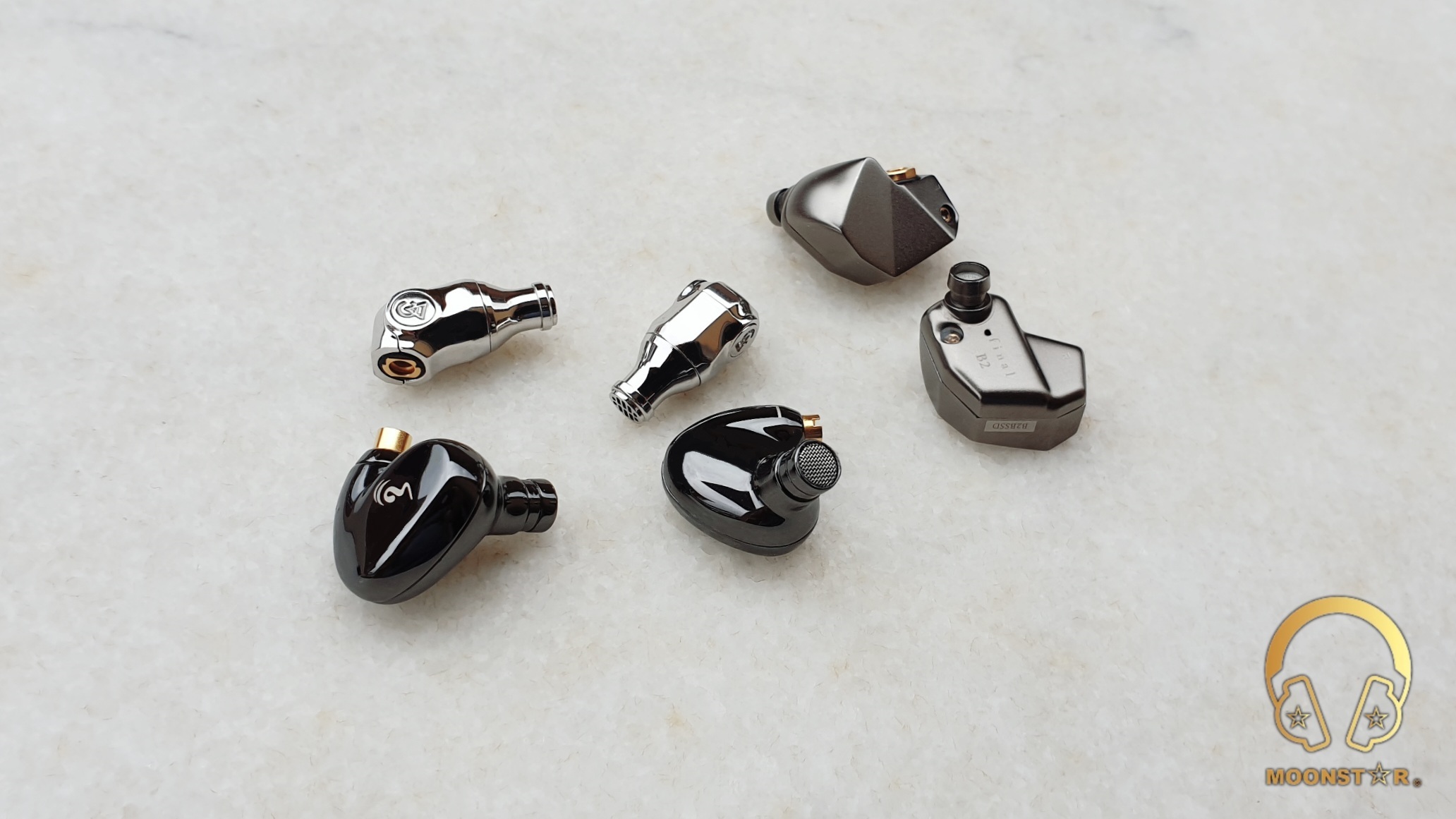 The oBravo Cupid is a very robust In-Ear Monitor with an impressive sound performance thanks to the hybrid driver configuration which is a combination of a dynamic and a planar magnetic driver. The relative small dynamic driver is responsible for the dynamic and impactful low end, while the planar magnetic driver offers an upper midrange and treble presentation that is pretty detailed, transparent and lively. The Ultimate Edition/Version comes also with a great cable and some nice adaptors that do worth the price difference.