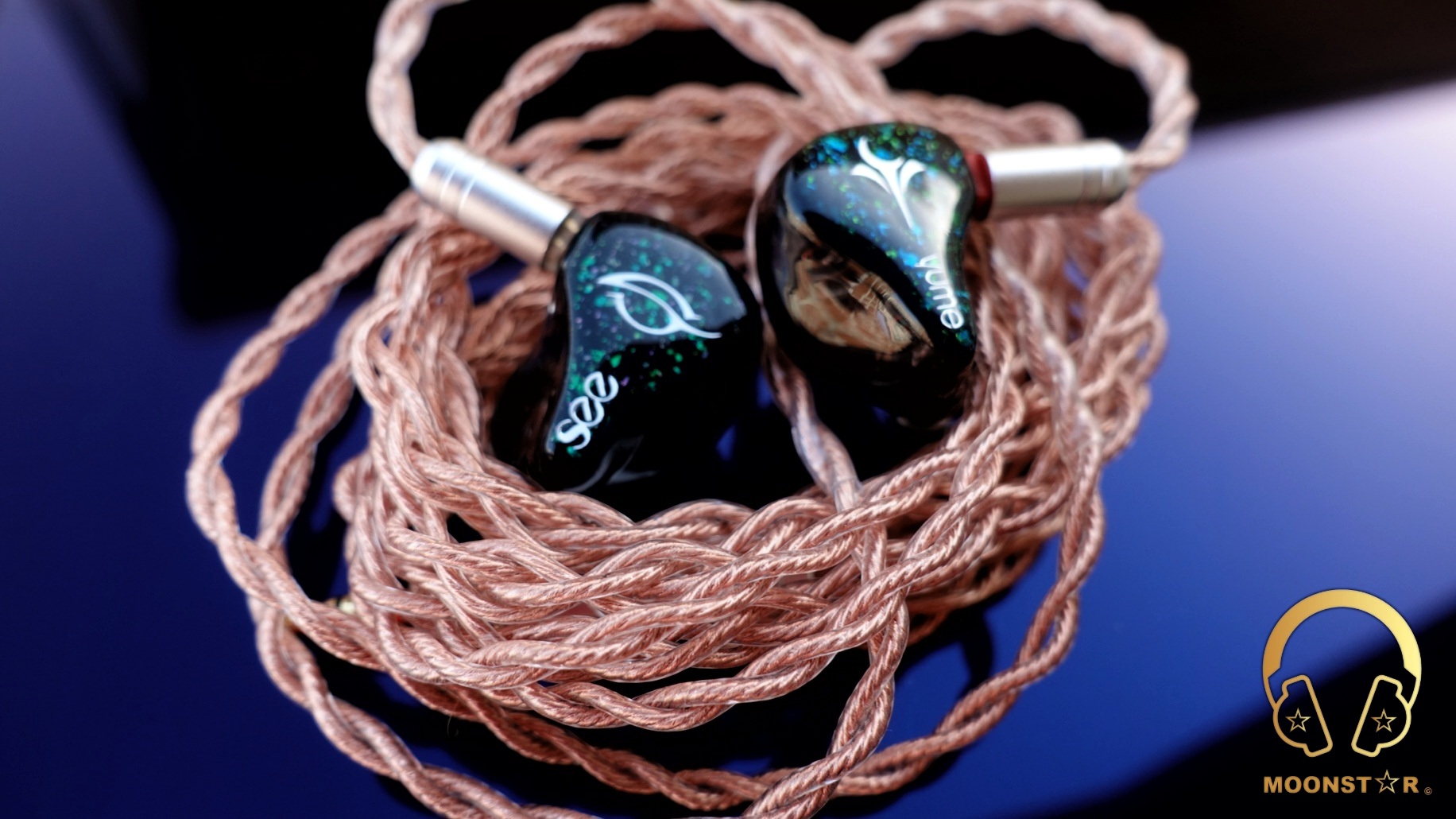 SeeAudio is a relative new Chinese brand that is specialized in both High End & Mid-Fi Custom and Universal Fit In-Ear Monitor and has also collaborations with other brands in terms of sound tuning proposes.

I would like to thank SeeAudio for providing me the YUME In-Ear Monitor via HiFiGO for review purposes. I am not affiliated with SeeAudio or HiFiGO beyond this review and these words reflect my true and unaltered opinions about the product.

The MSRP price of the SeeAudio YUME is actually around $169,00USD. More information’s can be found under the link below;

The SeeAudio YUME came inside a pretty large box that was wrapped with a cardboard in blue-pink colors that has the YUME branding and an Anime character on the top, while some product related specifications and details are printed at the bottom of those box. 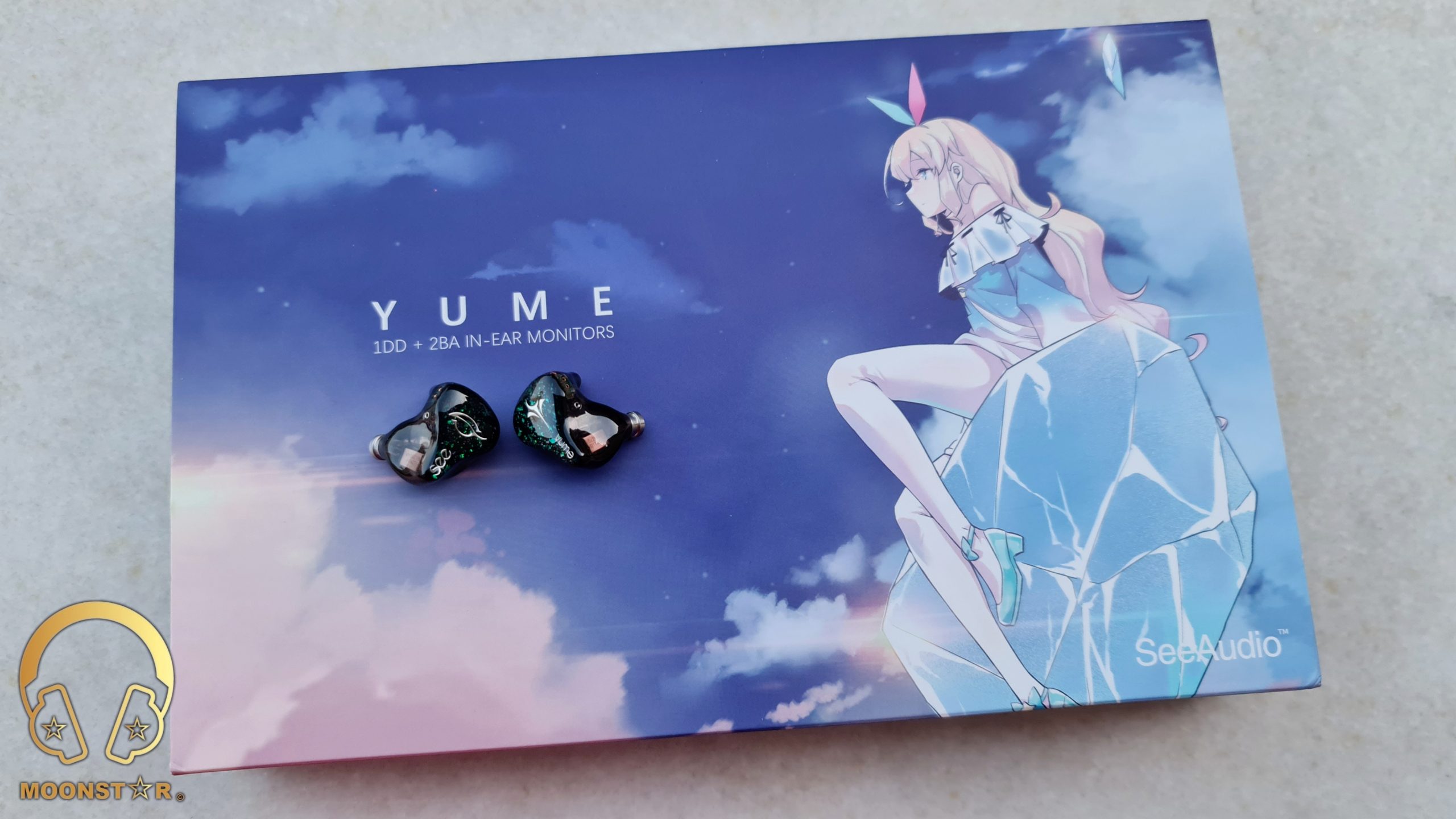 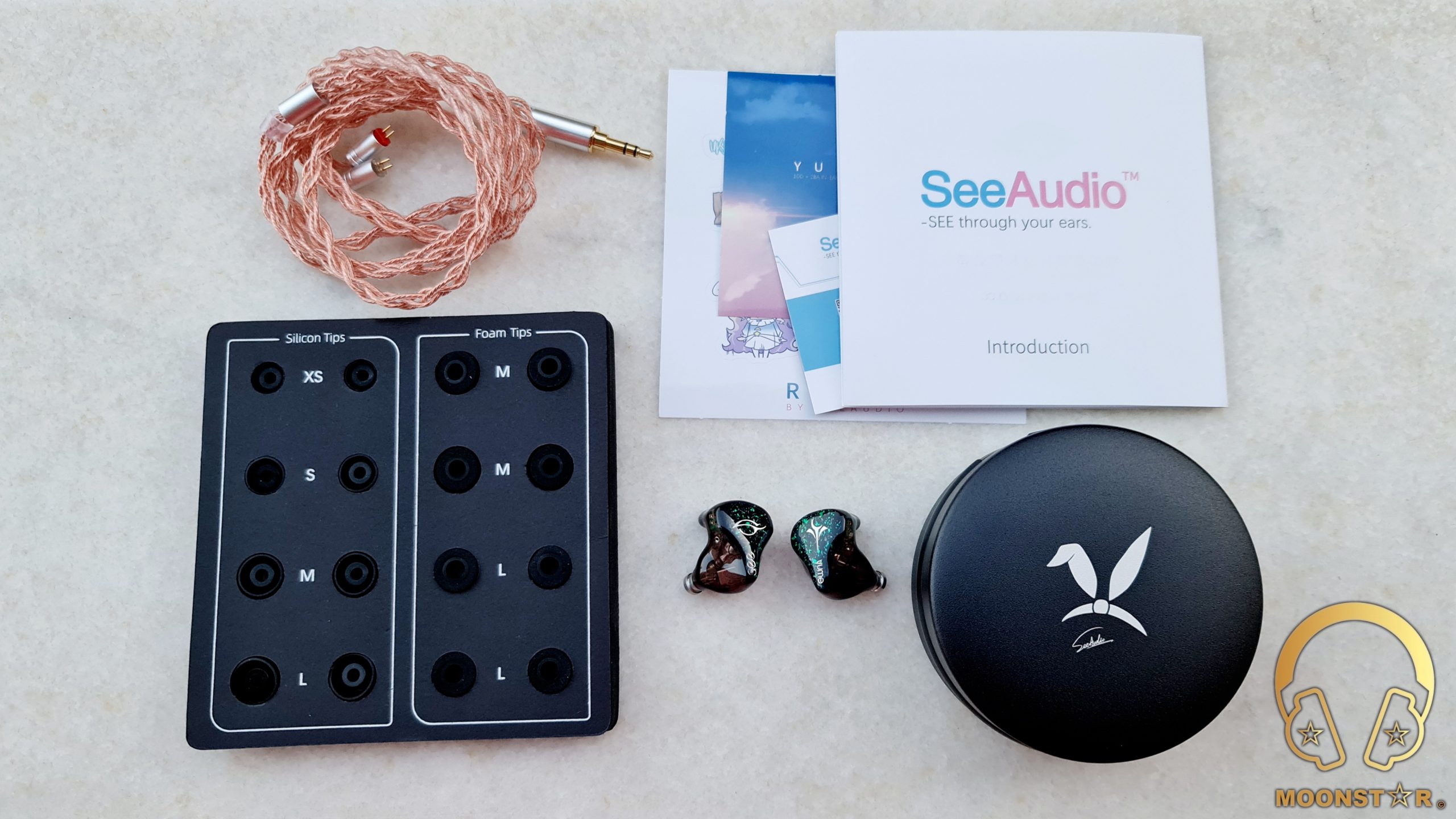 The YUME came with 4 pairs of silicone and 4 pairs of foam ear tips that are placed carefully in to a removable foam sheet. 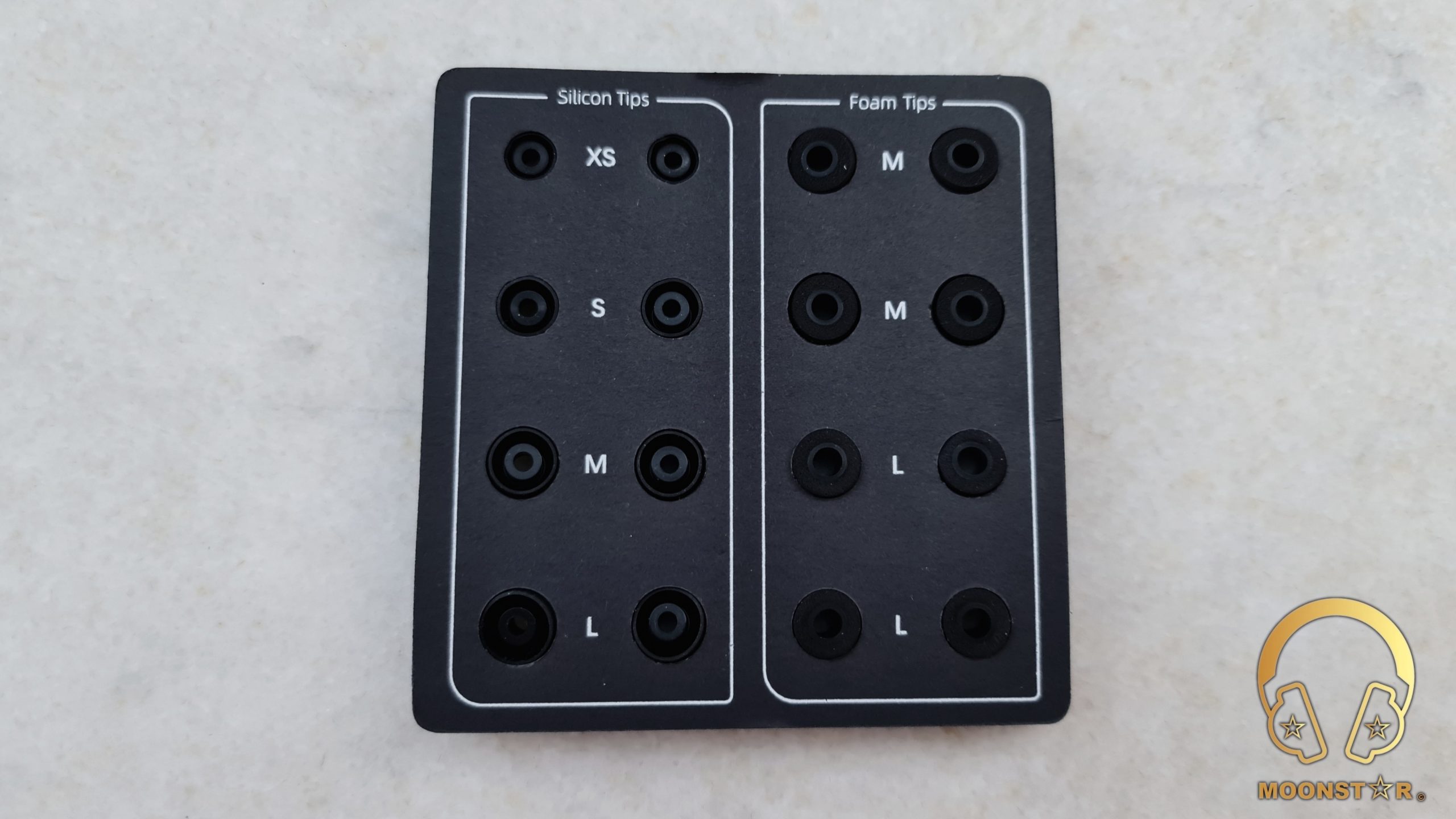 The box of the YUME includes a storage case and some fancy print materials like stickers and cards with Anime characters. 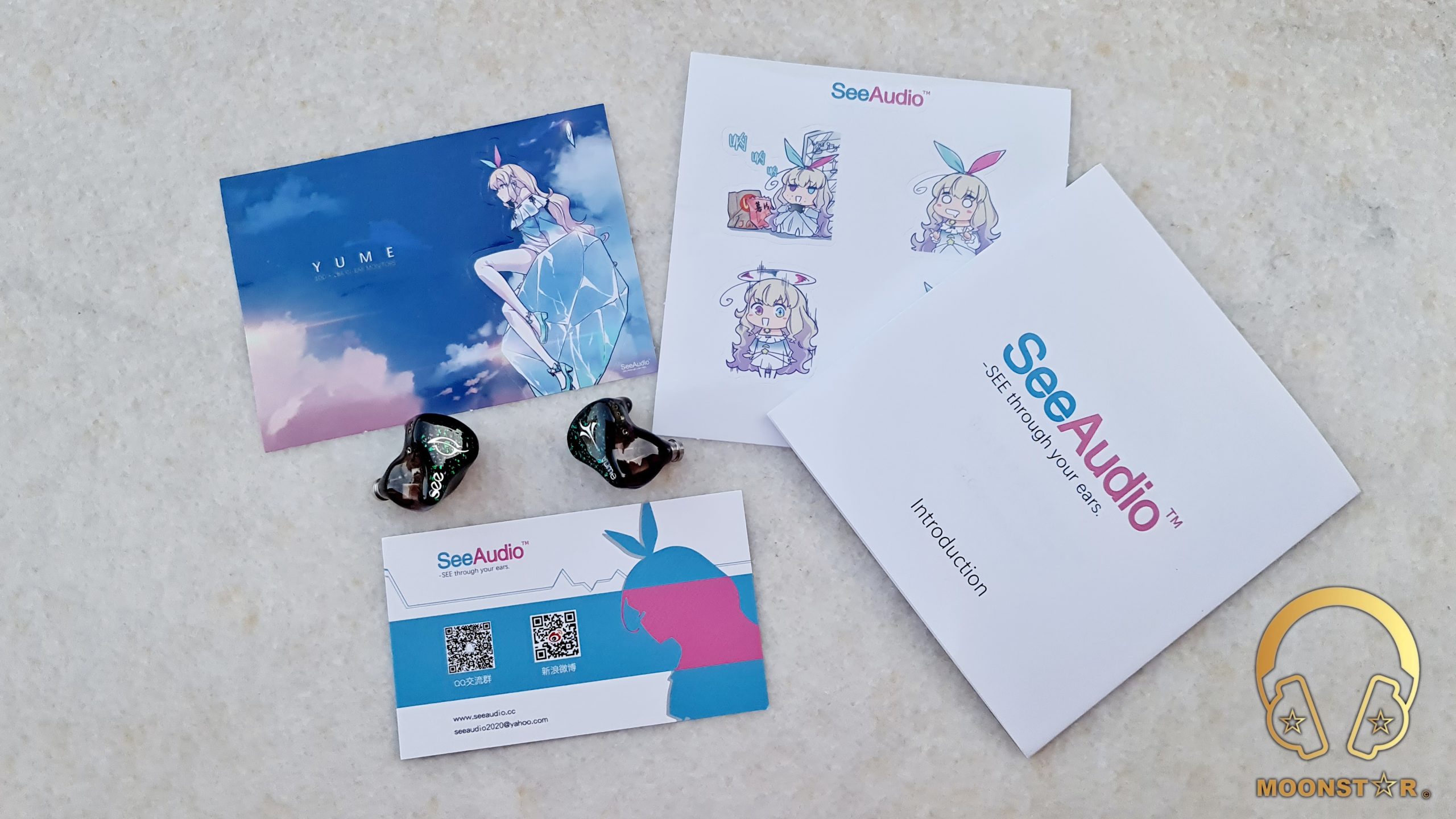 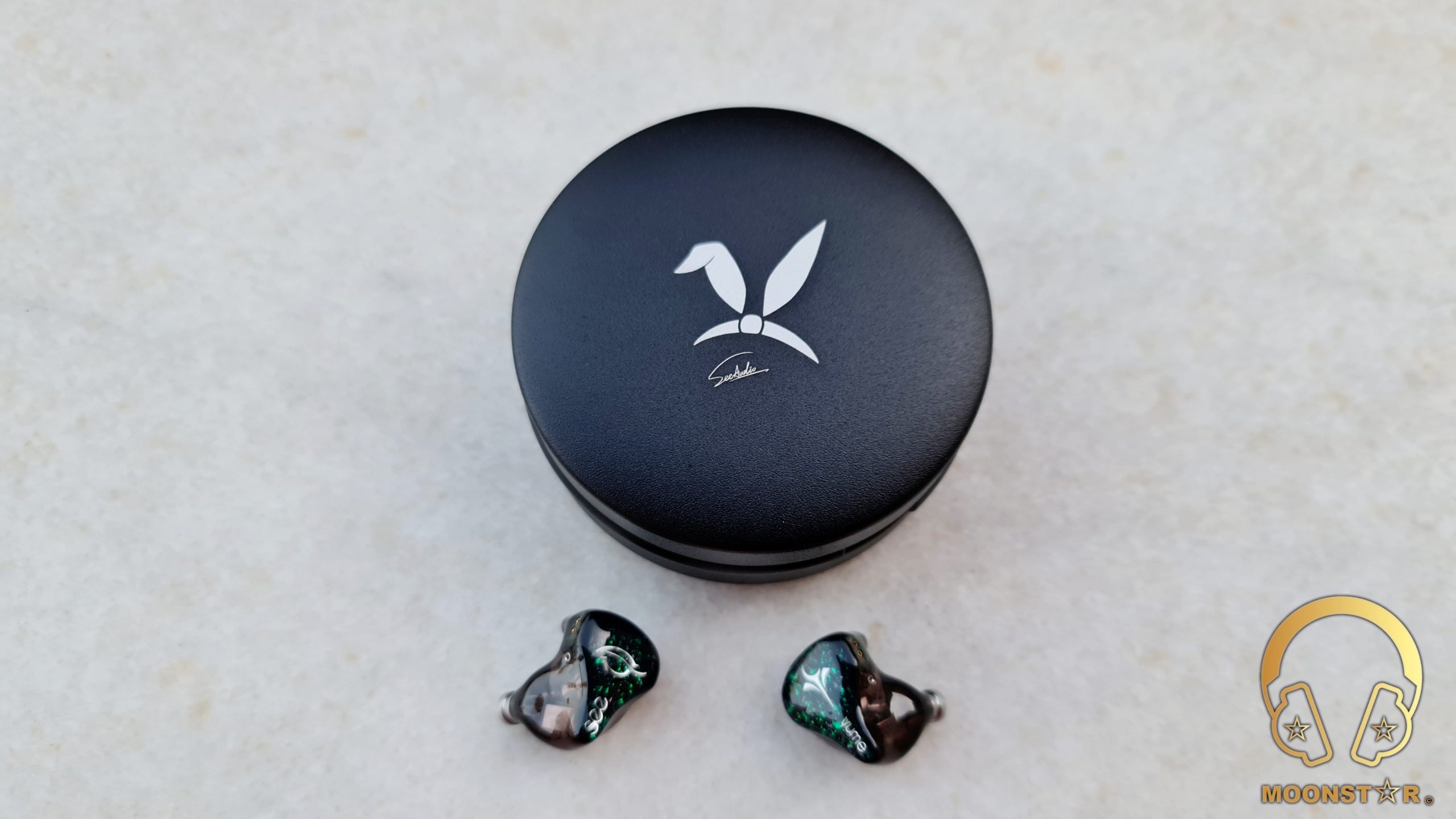 The SeeAudio YUME is a fantastic looking IEM with a semi-custom monitor shell that shows a high quality appearance. The inner parts are visible under the semitransparent main body, where you can actually see the neat and precise placement of driver units.

On the front of the monitor shells are the gorgeous looking faceplates with a green and purple glitters that do beautifully shine under sunlight. 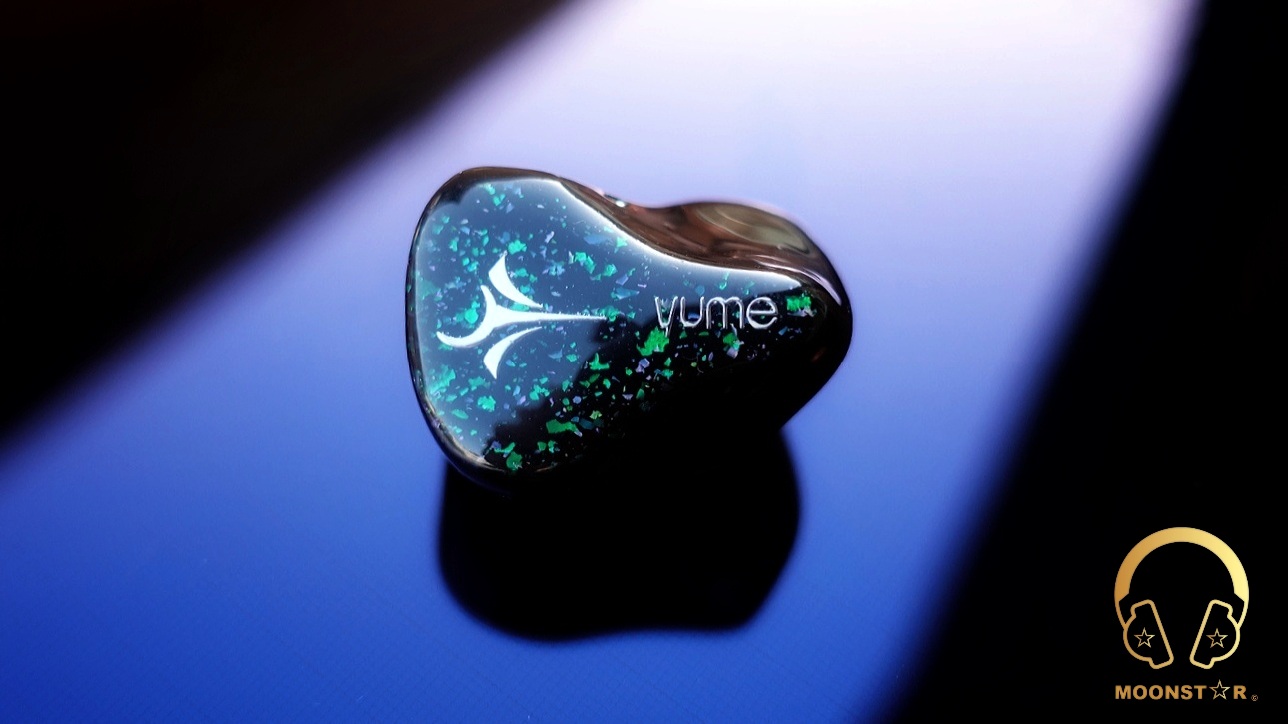 The Left earpiece has the Yume Logo the right earpiece SeeAudio brand logo in sliver/metallic color on the top that do look pretty stylish. 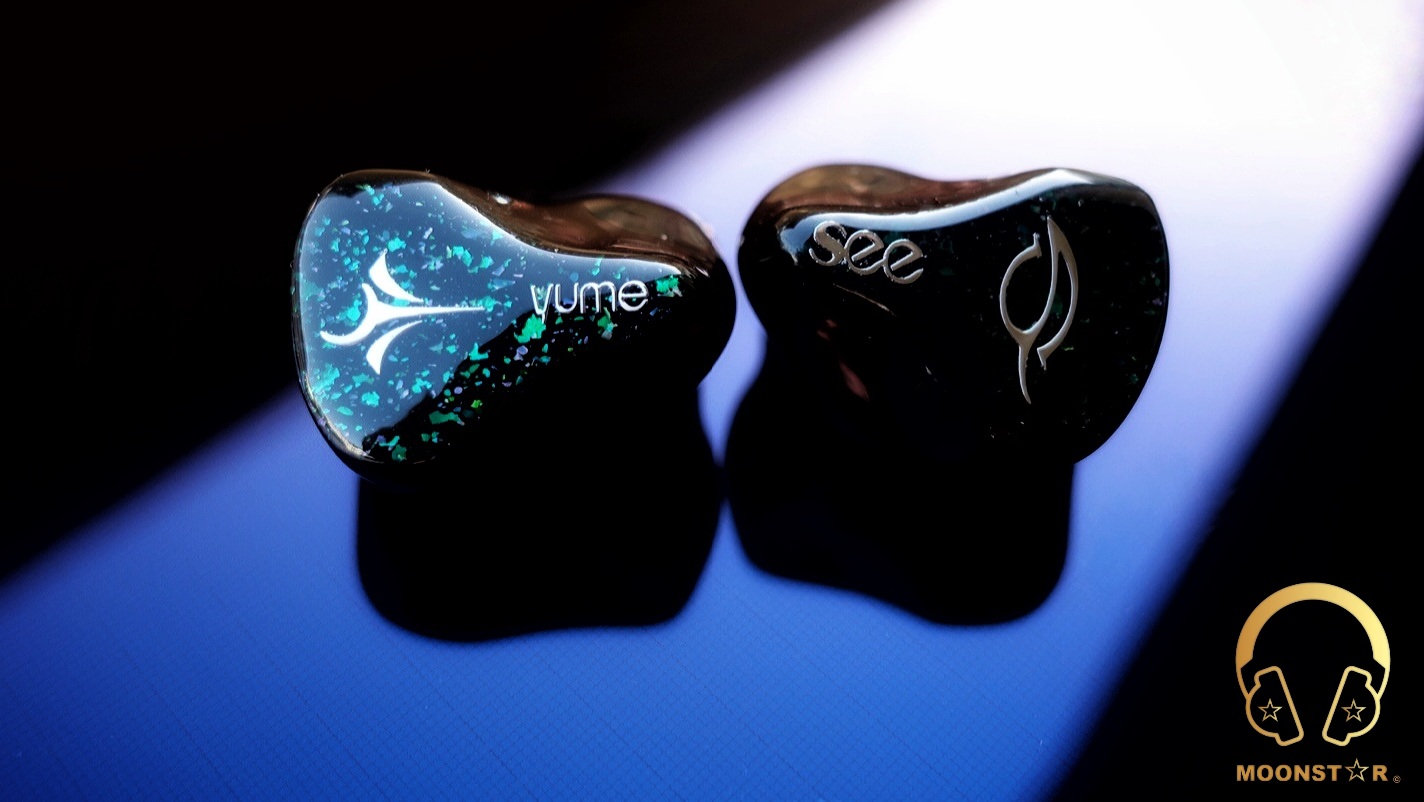 On the top of the monitor shells are the 0.78mm diameter 2-Pin female connectors that do show a quite tight and secure connection. Each monitor has a small vent with a metal ring for the dynamic driver that are located near the 2-Pin connectors. 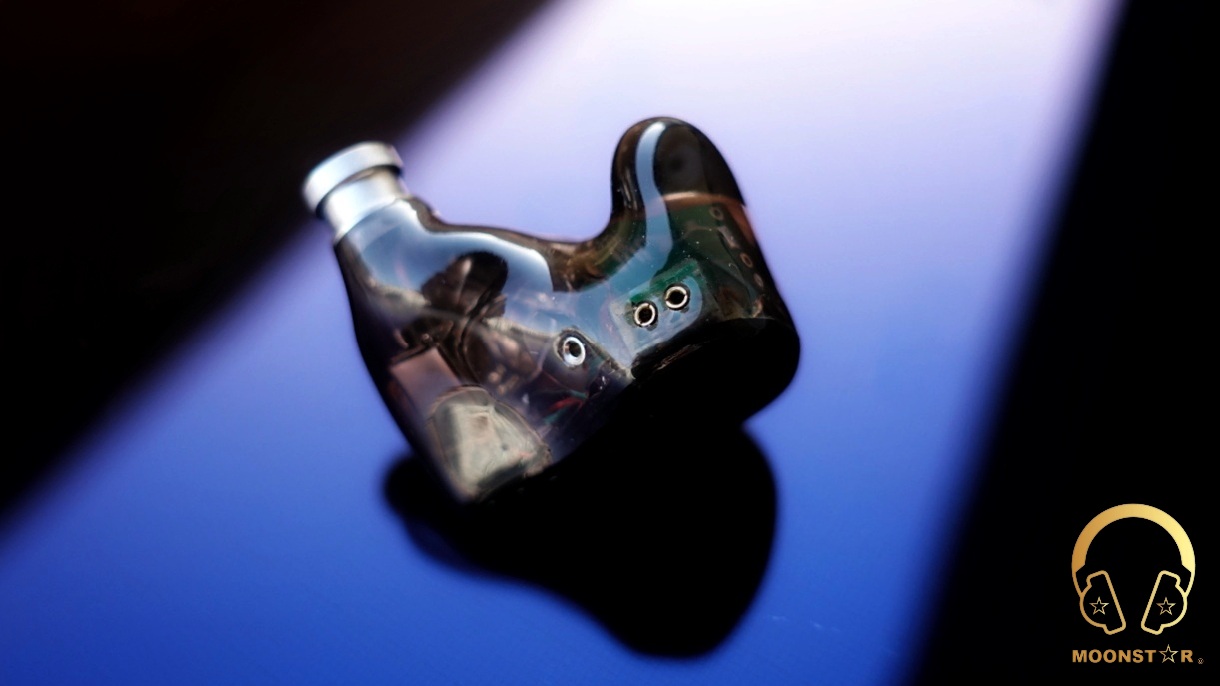 The inners surface has an ergonomic shape that fits prefect to my medium sized ears. The sound nozzle has a metal spout with a filter on the top that is also made of metal material. This filter prevents the insertion of unwanted particles like dust or earwax. 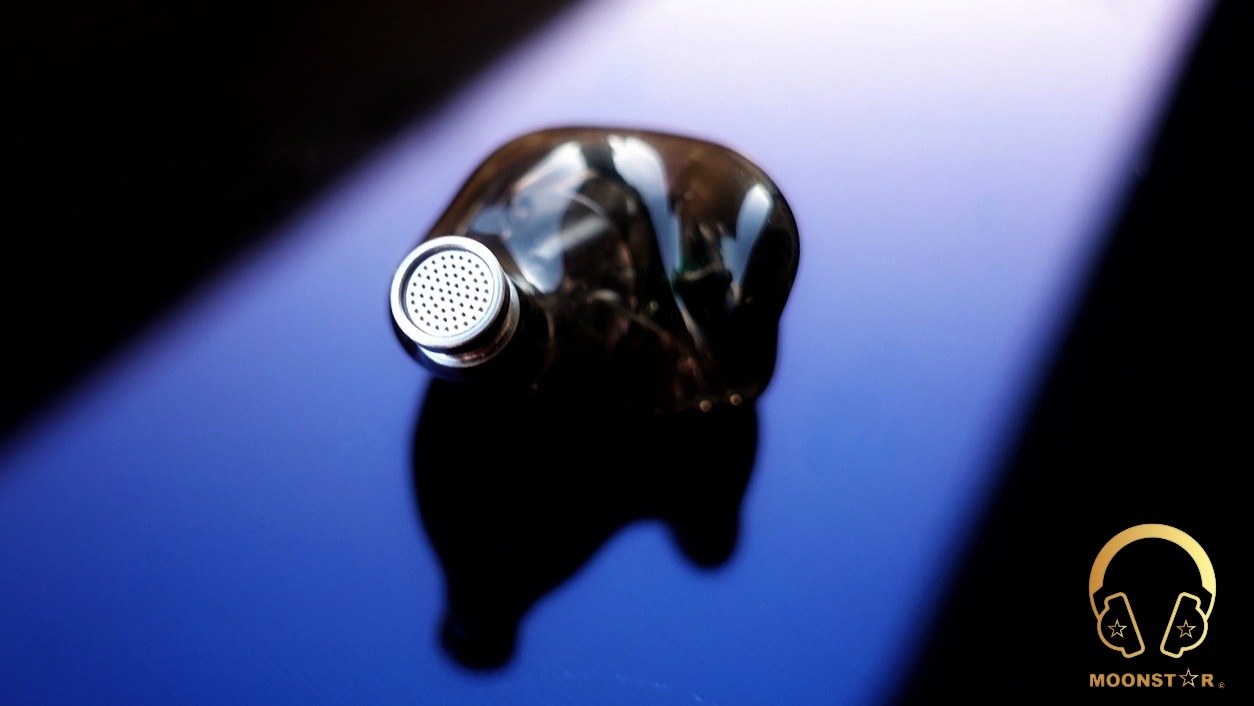 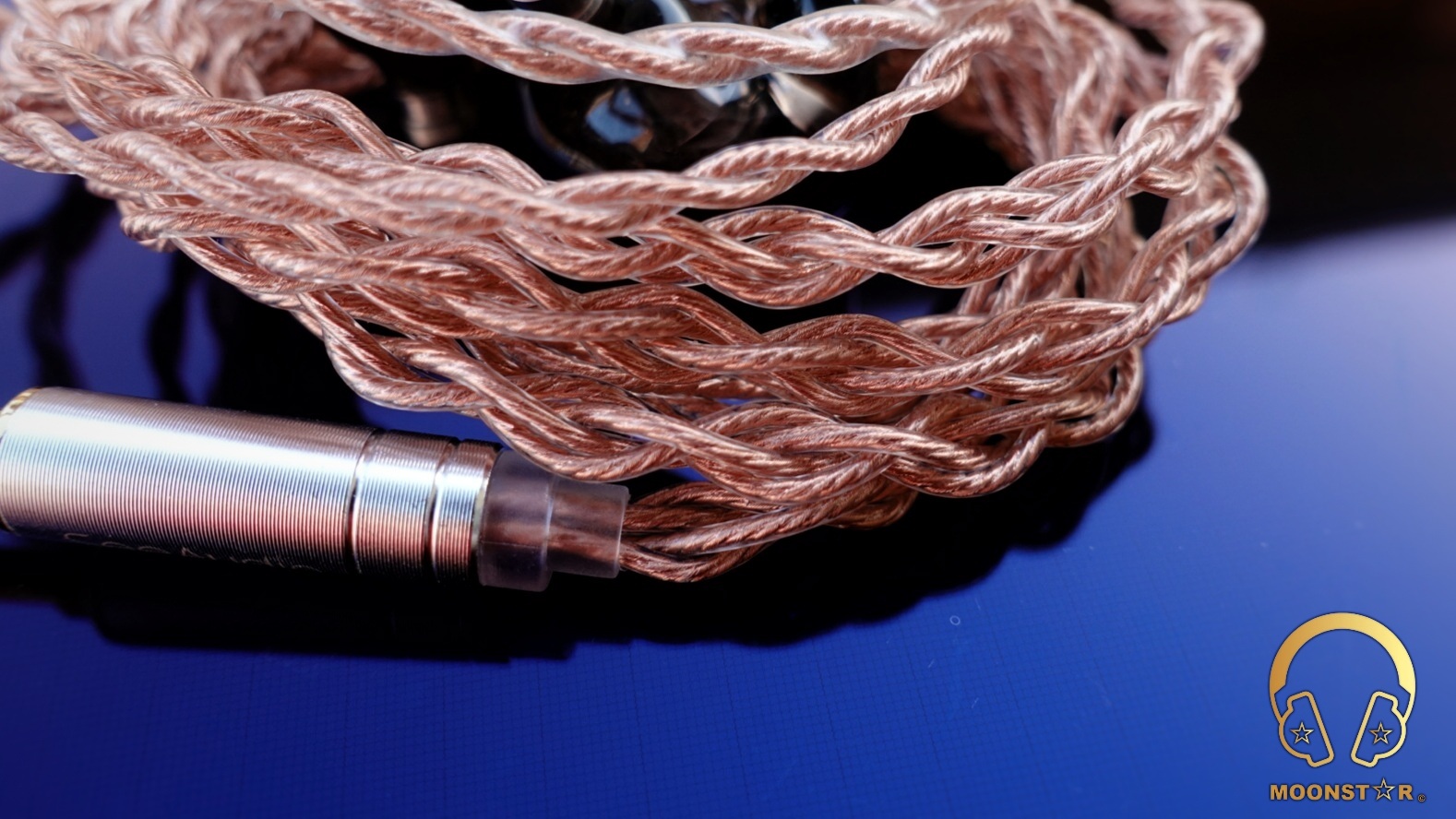 The detachable cable of then SeeAudio YUME features 0.78mm diameter 2-Pin female connectors that are protected with a metal housing in silver color. Each connector sports Left (transparent) & Right (red) indicators and blue dots for the right (+/-) insertion). 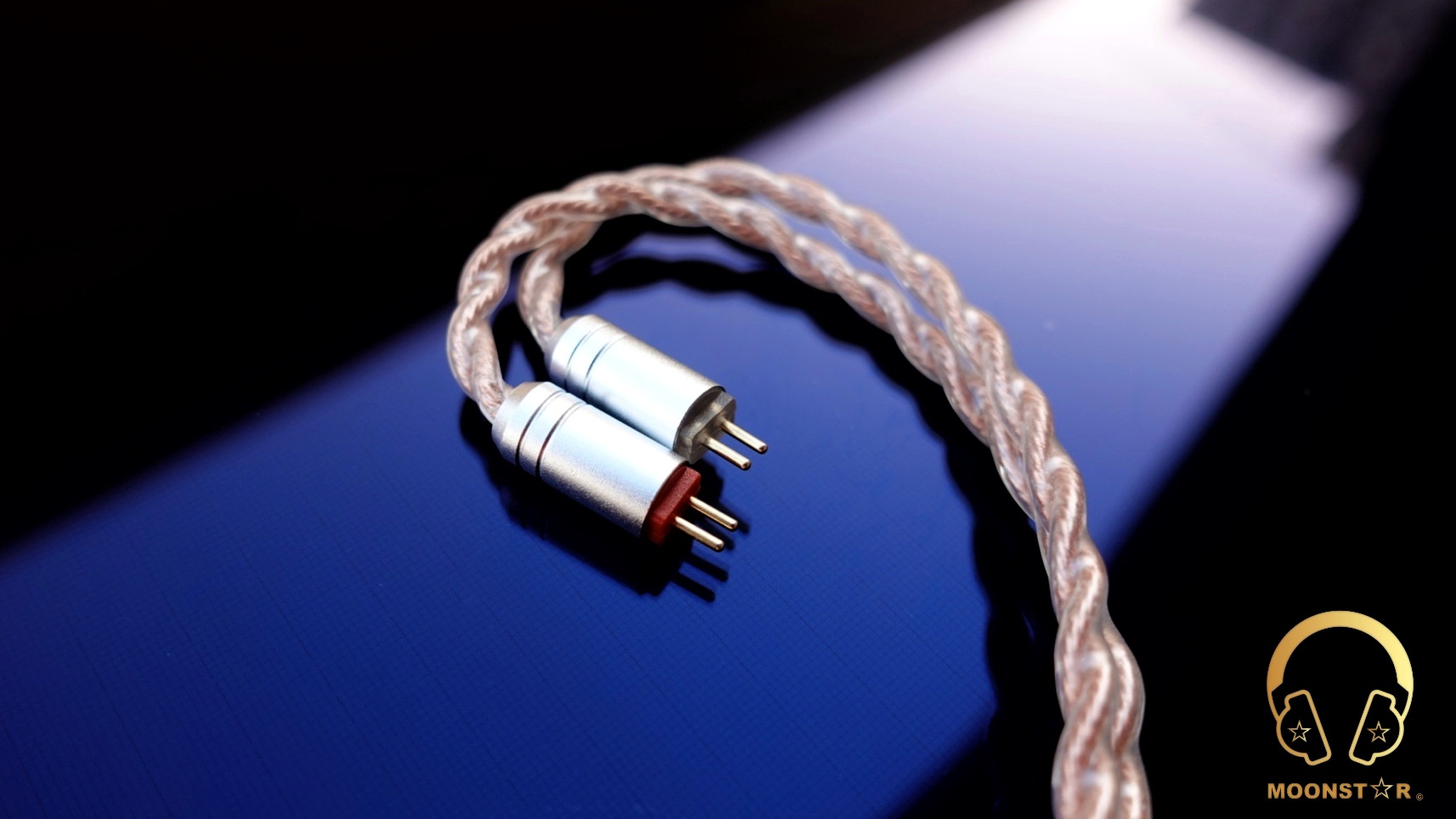 The cable of the YUME has a metal Y splitter and a transparent plastic chin slider. 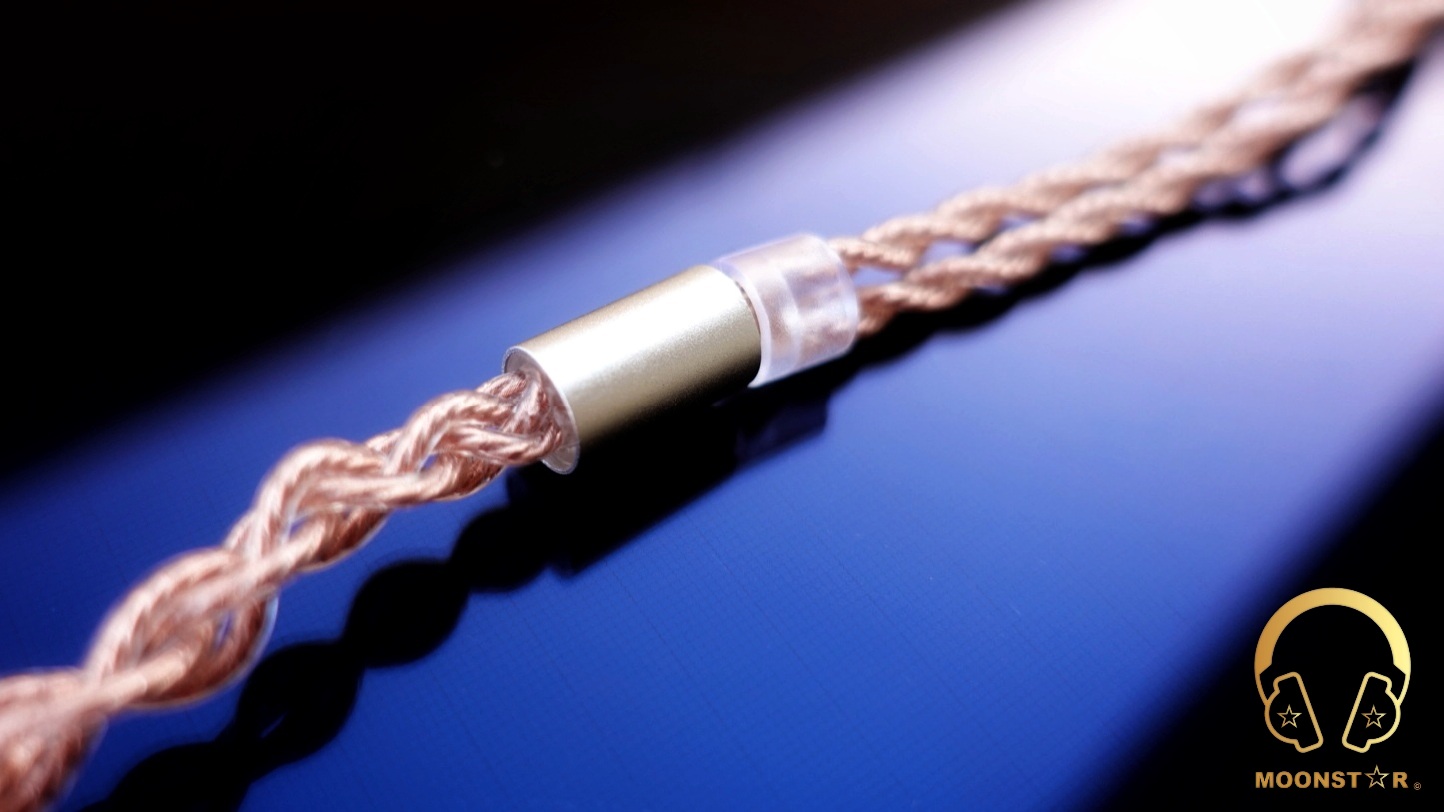 The cable comes with a 3.5mm headphone jack that has a straight profiled metal housing in silver color. The housing features a plastic strain relief for extra durability. 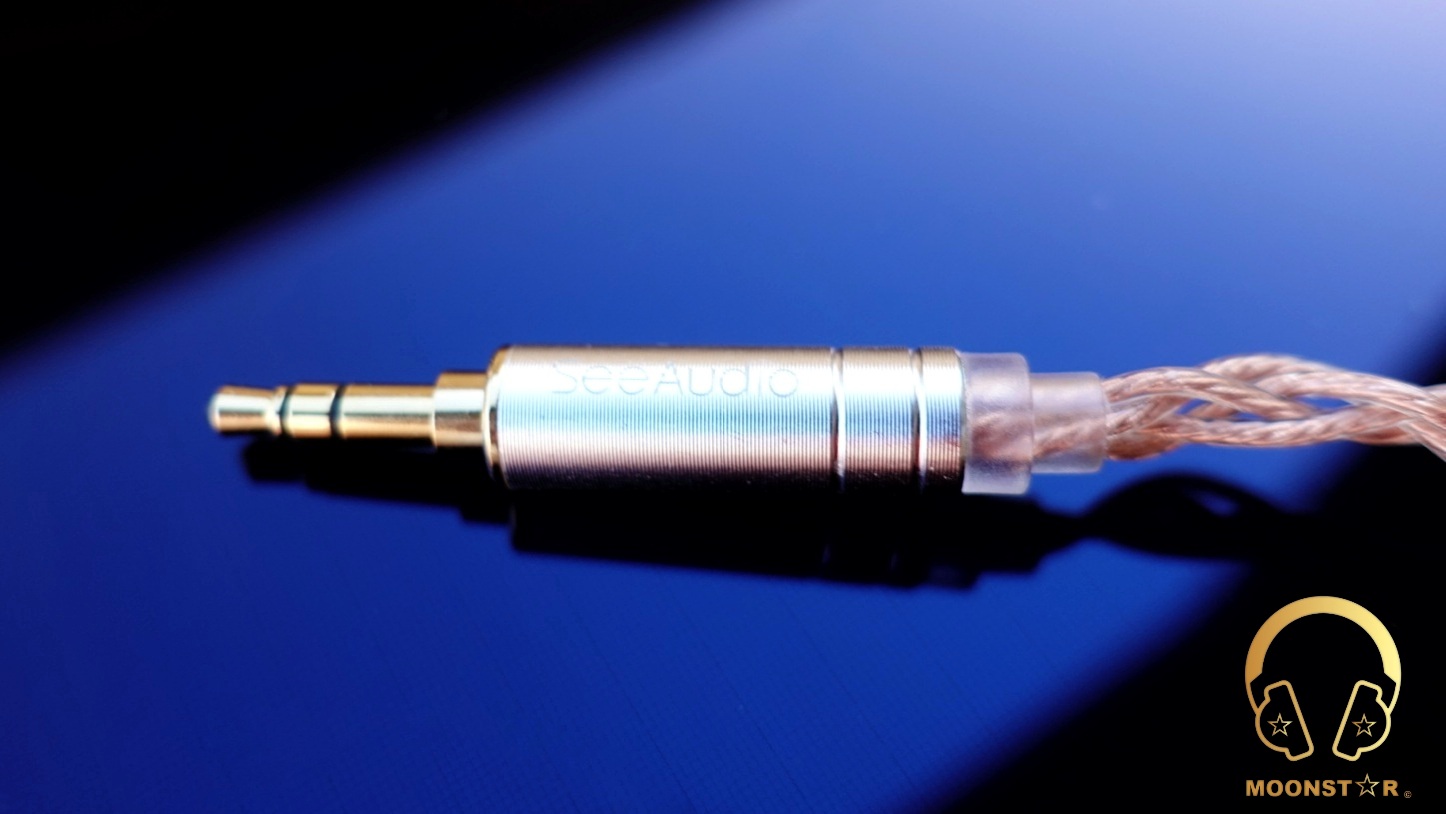 The build quality and design of both the cable and the monitor shells is on a high level!

The SeeAudio YUME is an In-Ear Monitor with good ergonomic fit thanks to its relative small size and semicustom like shape. The YUME didn’t hurt my ear with an average size of ear concha even after long listening periods.

The passive noise isolation of the YUME is about 26dB, which makes it to an IEM with a quite sufficient isolation for the use in public transport like metro, bus or train. 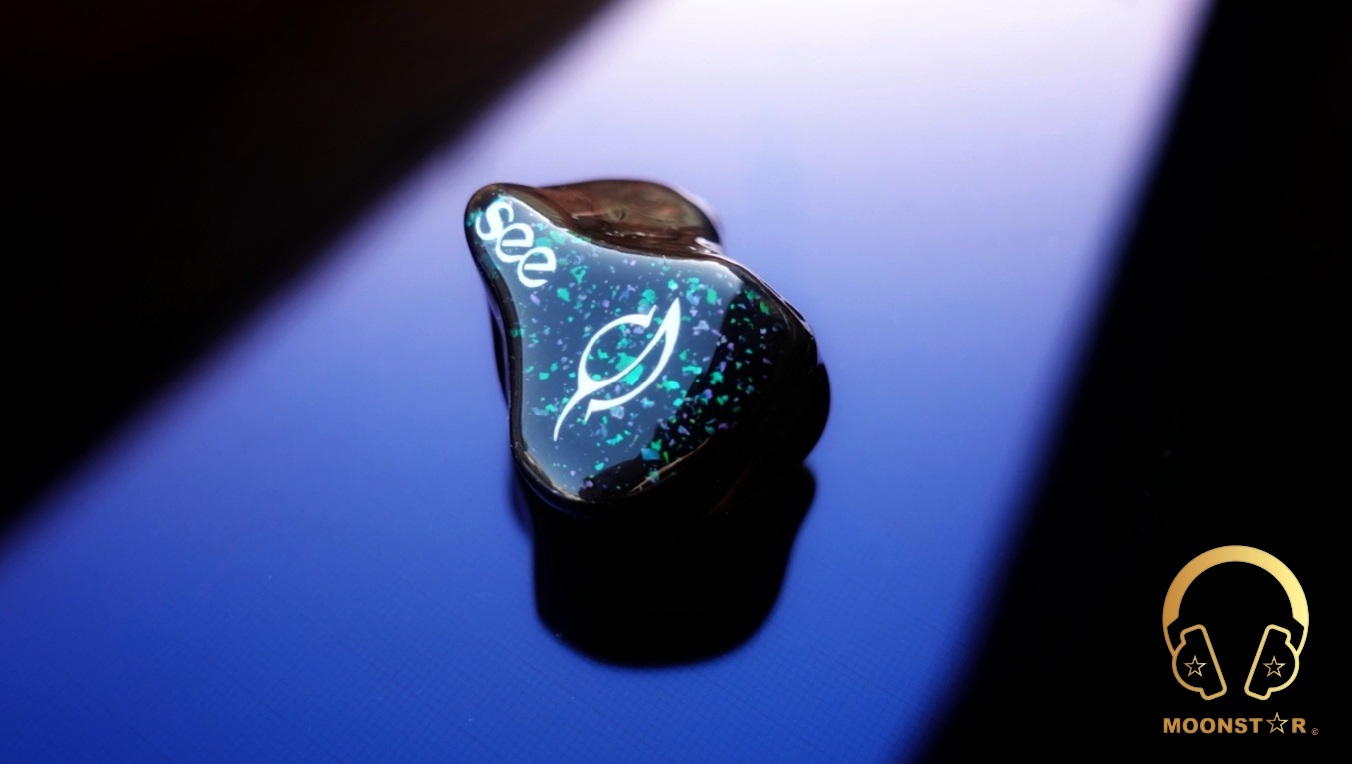 The SeeAudio YUME has an impedance of 32ohm and shows a sensitivity of about 106dB, which makes it to an ideal IEM for sources like Smartphone’s, Tablets and smaller sized DAP that do have a relative low amplifications. 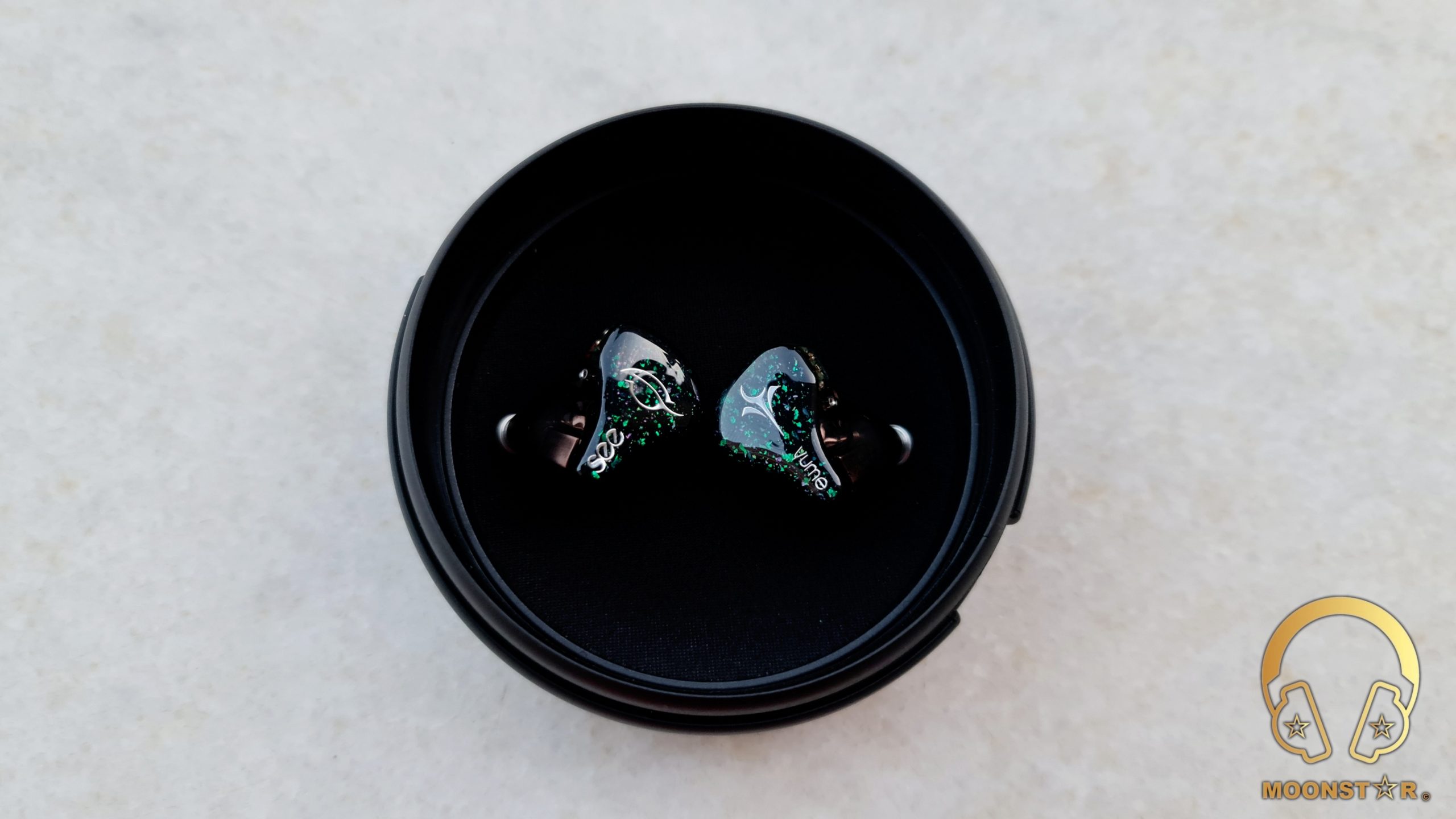 The Dynamic Driver of the YUME is equipped with a Liquid Silicone Diaphragm, which is a Liquid Silica that is extremely insensitive to temperature fluctuations resulting in consistent, distortion-free sound output.

To remove any multi-driver crossover distortion issue in the output, SeeAudio has designed the inner acoustic structure with the Low-Frequency Filter Conversion Technology. In this, they have added a precisely designed 33.91 cubic millimeter front cavity between the DD and the sound guide capillary. It improves the overall consistency of the output and ensures that there is no multi-driver distortion. 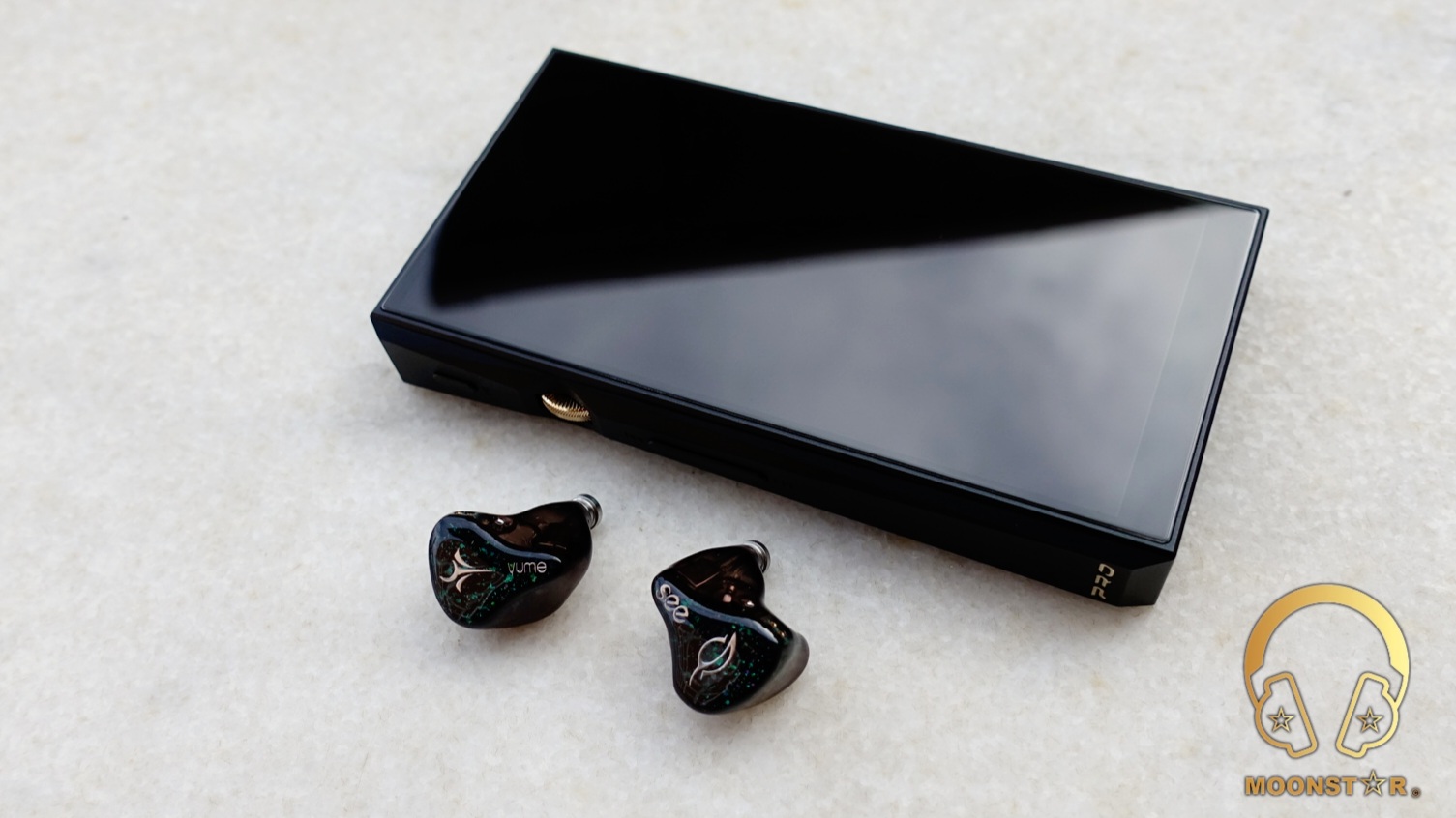 The SeeAudio YUME shows a pretty linear bass response with focus in the subbass region, while the midrange sounds transparent and fairly detailed. The treble region of the YUME is in general crisp and bright, which shows its main emphasis in the lower treble area.

This review is written after a burn-in period of 55 – 60 Hours and have used the stock silicone ear tips that are included to the package. 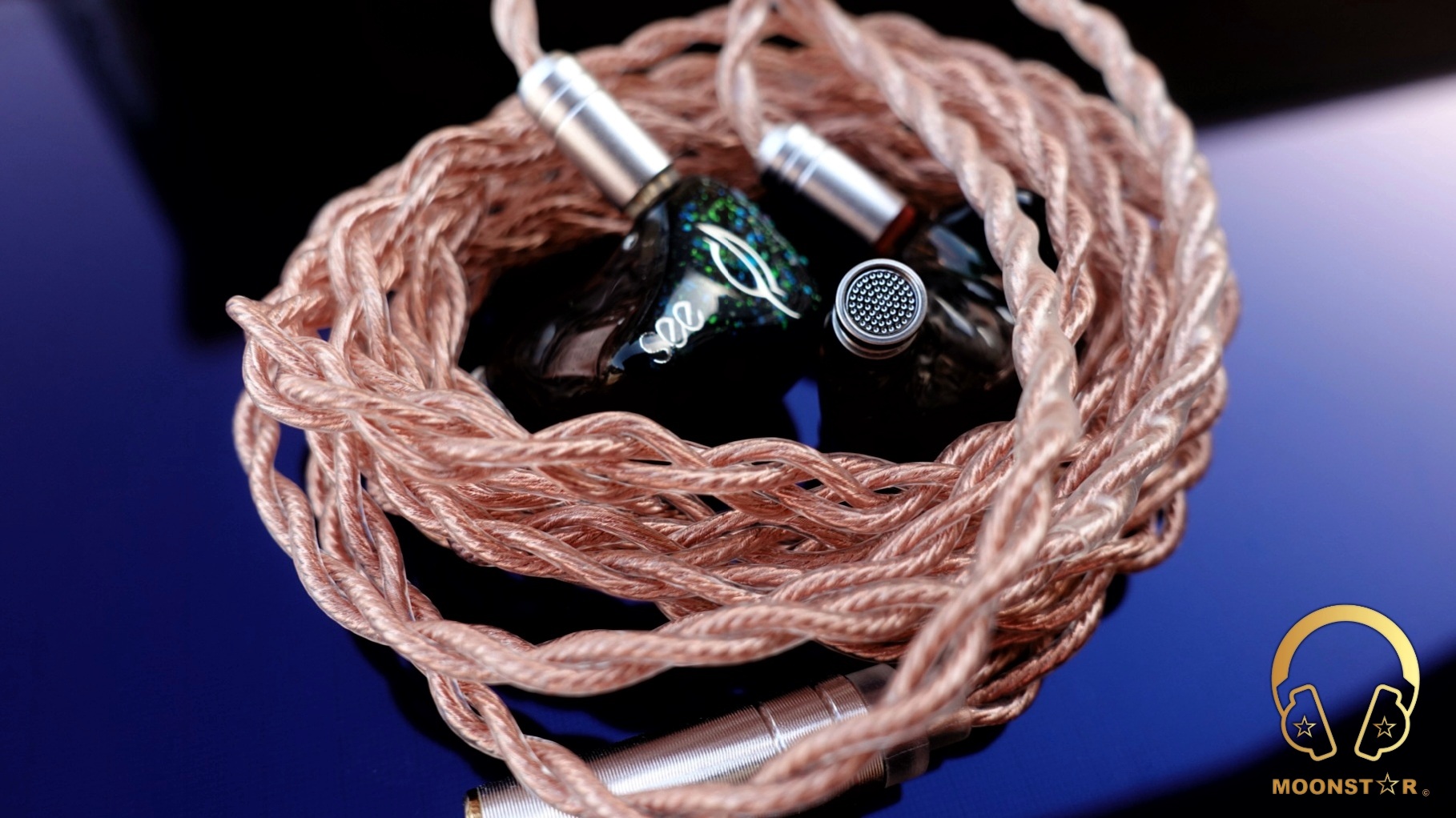 The SeeAudio YUME is an In-Ear Monitor with a quite linear bass response. The focal point in the lower frequency area is the subbass region which was also visible on the Frequency Graph that was available on the box.

The subbass region shows a natural sense of depth and rumble, while the extension in on an average level. What stands out about the subbass response of the YUME is the control and speed. However, the intensity and rumble won’t meet your expectations if you are a bass-head or if you mainly listen to genres like electronic, Hip-Hop or RnB music.

When it comes to the midbass response of the SeeAudio YUME, I can say that it sounds in general tight and controlled, while it is less highlighted compared to the subbass region. This region shows a sufficient amount of impact, while the intensity, depth and impact is on a moderate level, however I would wish slightly more body and impact.

The lower frequency region of the YUME is quite successful in terms of resolution, clarity and control, while the subbass depth/rumble and midbass intensity/impact won’t suite bass intensive genres. SeeAudio is about to release the MIU with a more engaging, bassier, fun and thicker sound. 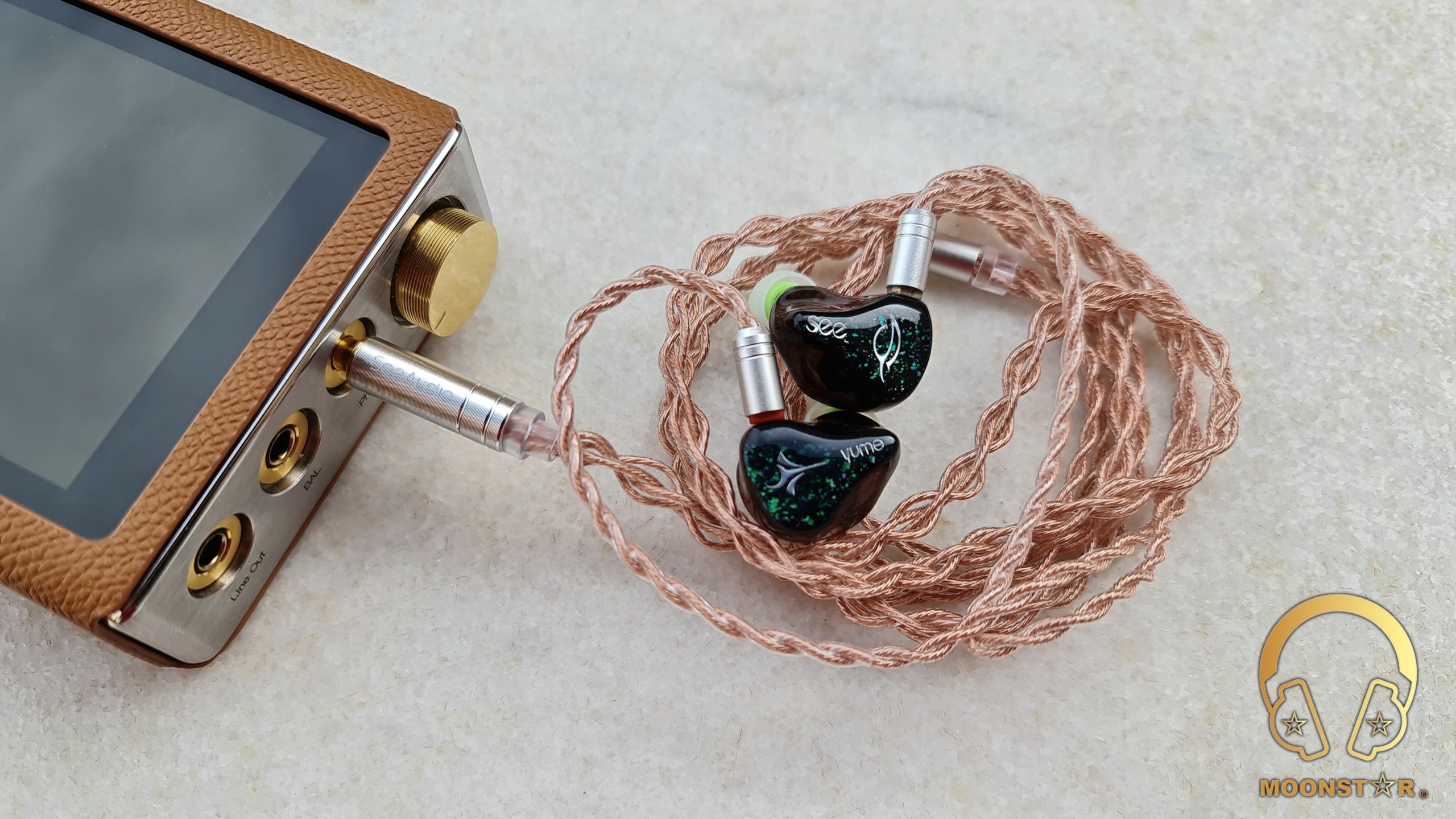 The SeeAudio YUME shows a fairly upfront midrange character and a neutral tonality with a tad of warmth that is generated in the lower midrange area. The midrange of the YUME offers a good sense of transparency and airiness thanks to the nicely pronounced upper midrange tuning.

The lower midrange shows a moderate amount of depth and body and is less pronounced compared to the upper midrange area. Male vocals like Barry White or Issac Hayes do sound pretty sweet and emotional, while instruments like acoustic guitars do shows slightly less body and intensity than normal.

The upper midrange of the SeeAudio YUME is nicely pronounced with a peak around the 3kHz region without to sound shouty. Female vocals like Edith Piaf or Sarah McLachlan do sound transparent, detailed and emotional, while percussive and rhythm instruments are reproduced with a good sense of attack and extension.

The YUME shows in general a pretty good midrange performance where it shows a good level of clarity and resolution, while I would wish a tad more body and warmth that could make the overall presentation almost perfect in this area, which is of course a matter of preference. 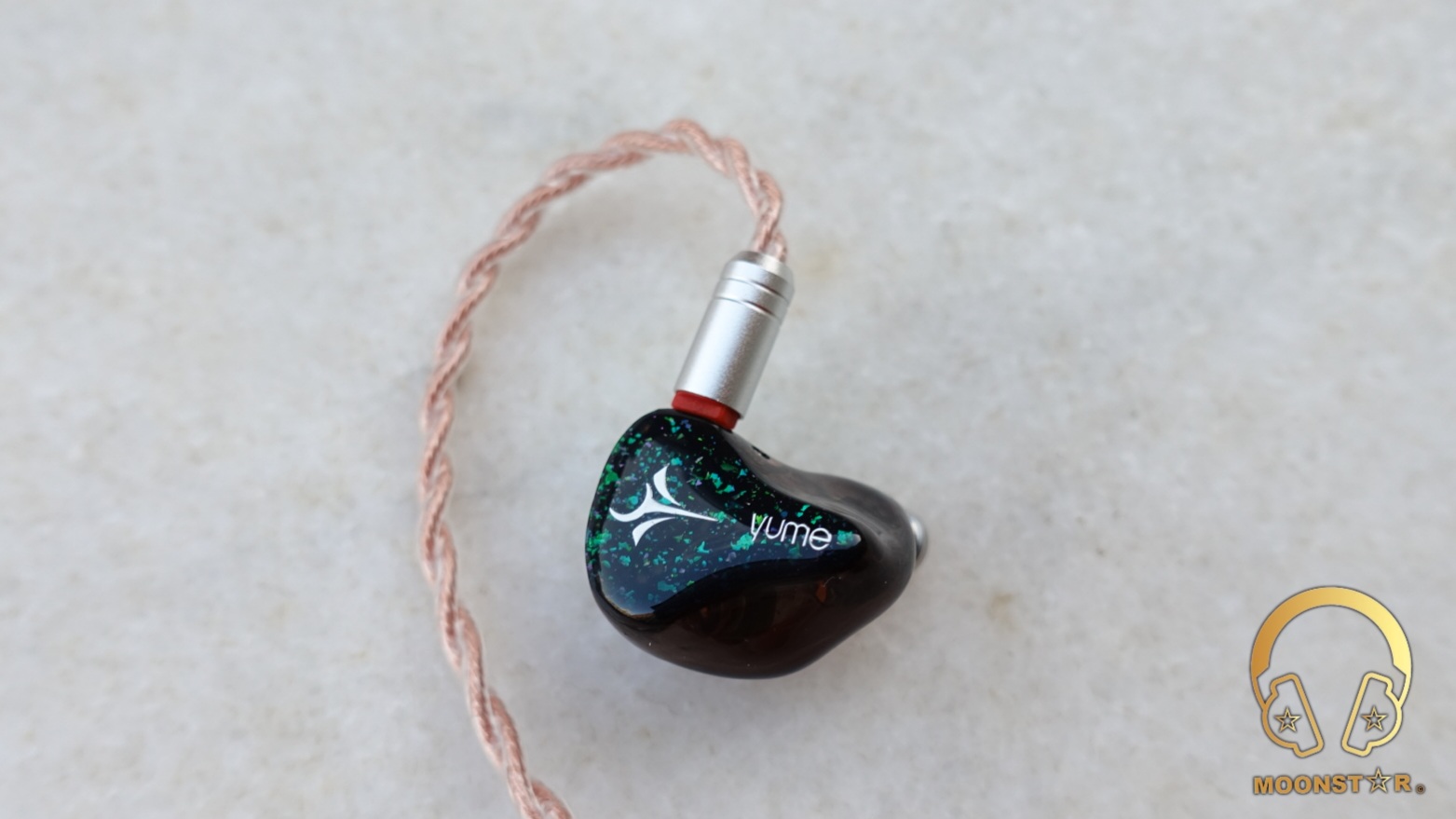 The SeeAudio YUME has a distinctive and fairly bright treble presentation, with moderate level of extension. The lower treble region of the YUME is more pronounced that is able to produce a good sense of clarity. The transitions from the upper midrange towards the lower treble area are in general fairly controlled, with exception of faster genres like metal music where the YUME can sound a bit harsh and loose.

Instruments like Hi-Hats are slightly in the background, while the hits of the crash cymbals are tight and showing good extension.

The upper treble region of the YUME is less pronounced and detailed compared to the lower treble area and shows a controlled roll-off after the 8kHz region. This region is able to produce a sufficient sense of airiness and sparkle while the extension is in general short while listen to instruments like flutes or violins. 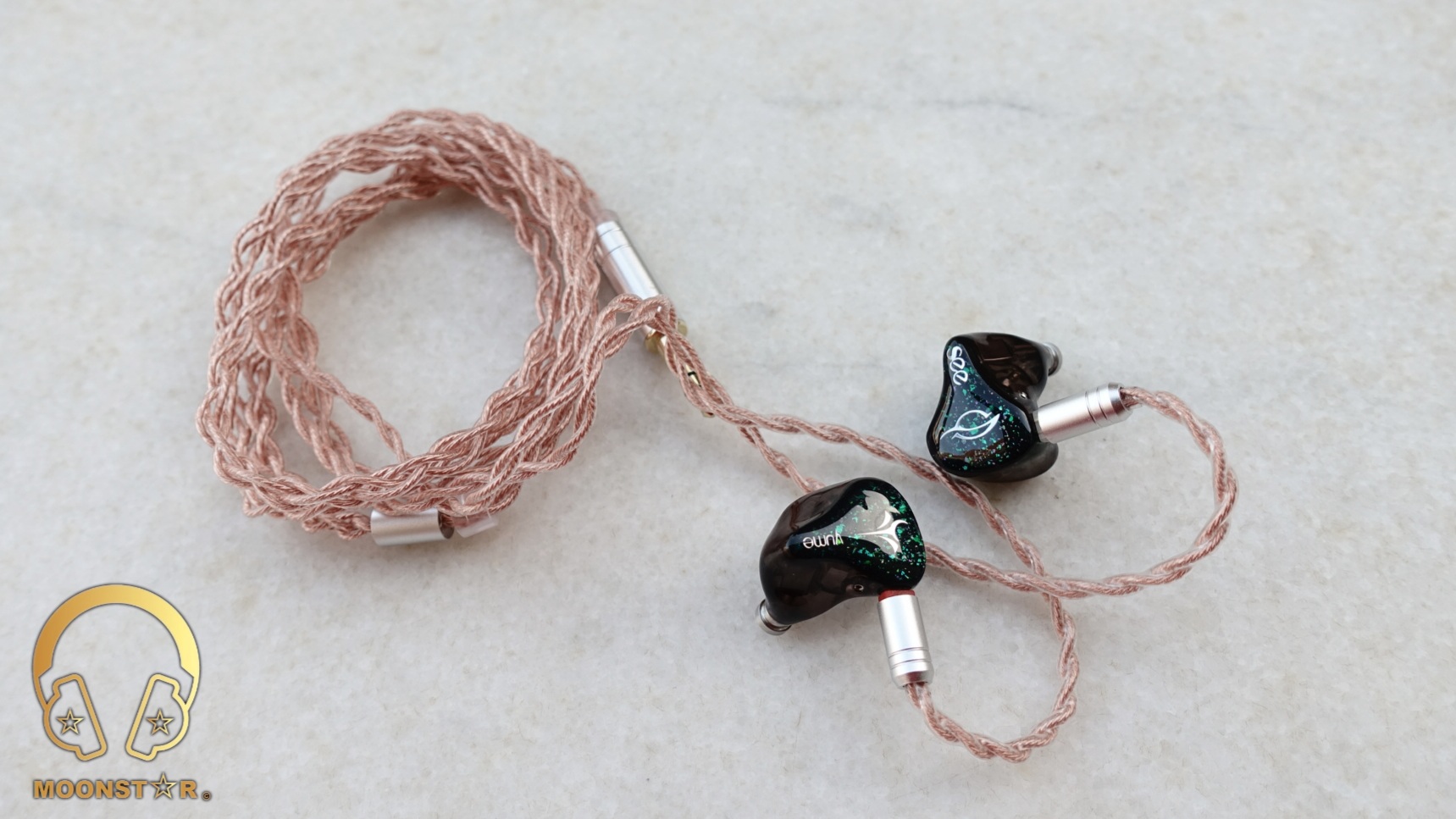 The SeeAudio YUME has a soundstage that is suitable for a fairly precise placement of instruments and vocals. The stage is not too narrow or wide, while the level of airiness and space between instruments is average. The soundstage of the YUME shows a slightly better performance in terms of wideness compared to its depth that is on a moderate level.

Both the SeeAudio YUME and the Thieaudio Legacy are gorgeous looking In-Ear Monitors with a Hybrid Driver configuration that do share many similarities in terms of sound character and performance.

The midbass region of both IEM’s sounds pretty linear, however the Thieaudio Legacy 4 offers additional depth, body and impact, while the SeeAudio YUME has the upper hand in terms of micro detail and speed in this area. 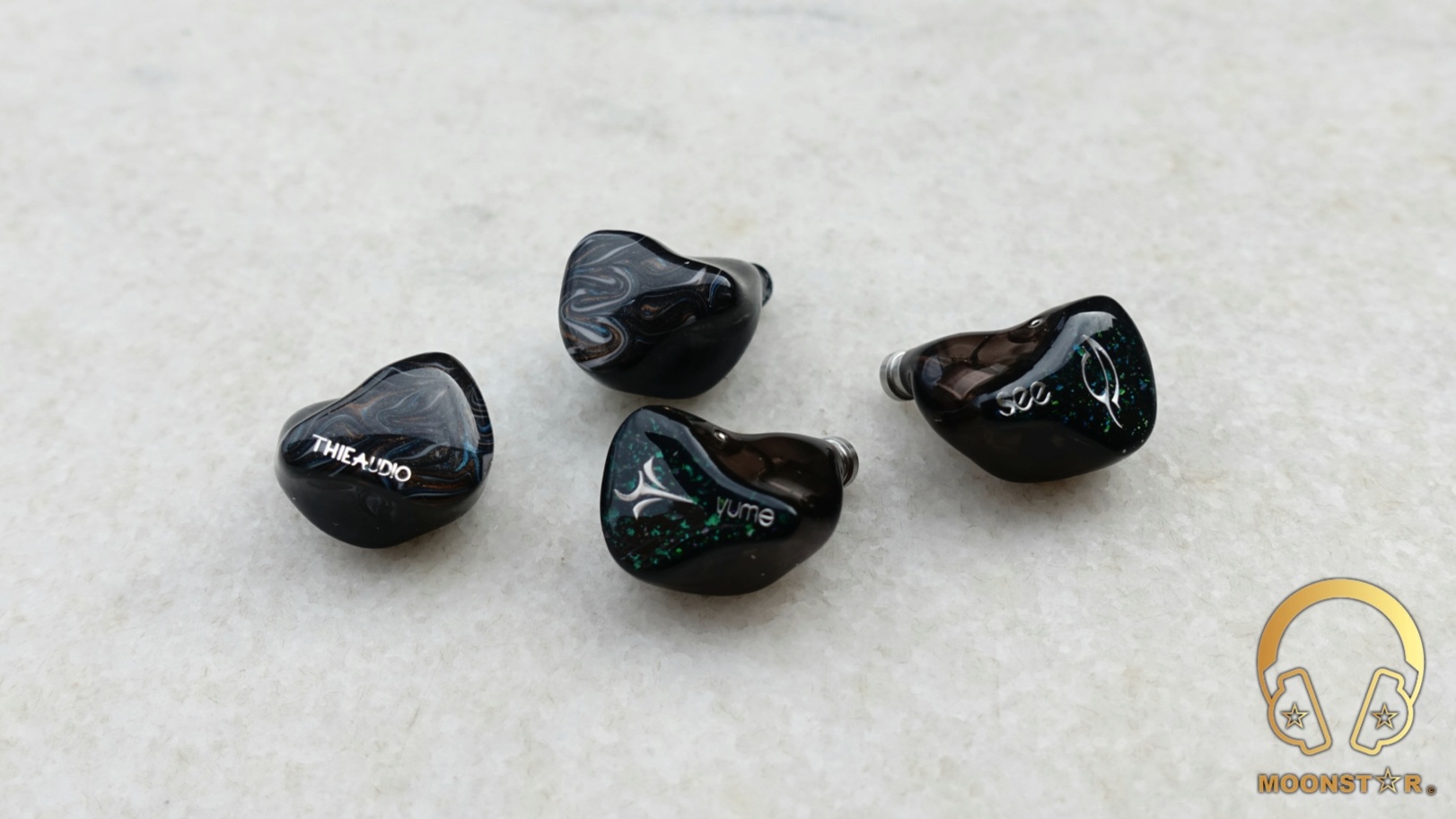 The treble range of both IEM’s shows many similarities such like a more pronounced lower treble region. The Legacy 4 has a slightly advantage in terms of clarity due the extra peak around the 5kHz region, while both do offer a good sense of airiness.

Both the SeeAudio YUME and the Thieaudio Legacy 4 are pretty equal in term of soundstage performance. The main difference is the depth where the Legacy 4 has the slightly edge.

Both the SeeAudio YUME and the MEE Audio MX4 Pro do have a Hybrid Driver configuration. The MX4 Pro has offers a 3BA+1DD setup, while the YUME has a 2BA+1DD setup. I know its subjective but the YUME looks definitely better and has also the upper hand in terms of build quality and isolation.

So how about the sound? The MEE Audio MX4 Pro has a warmer tonality and smoother overall timbre compared to SeeAudio YUME which sounds slightly more neutral, bright and energetic. 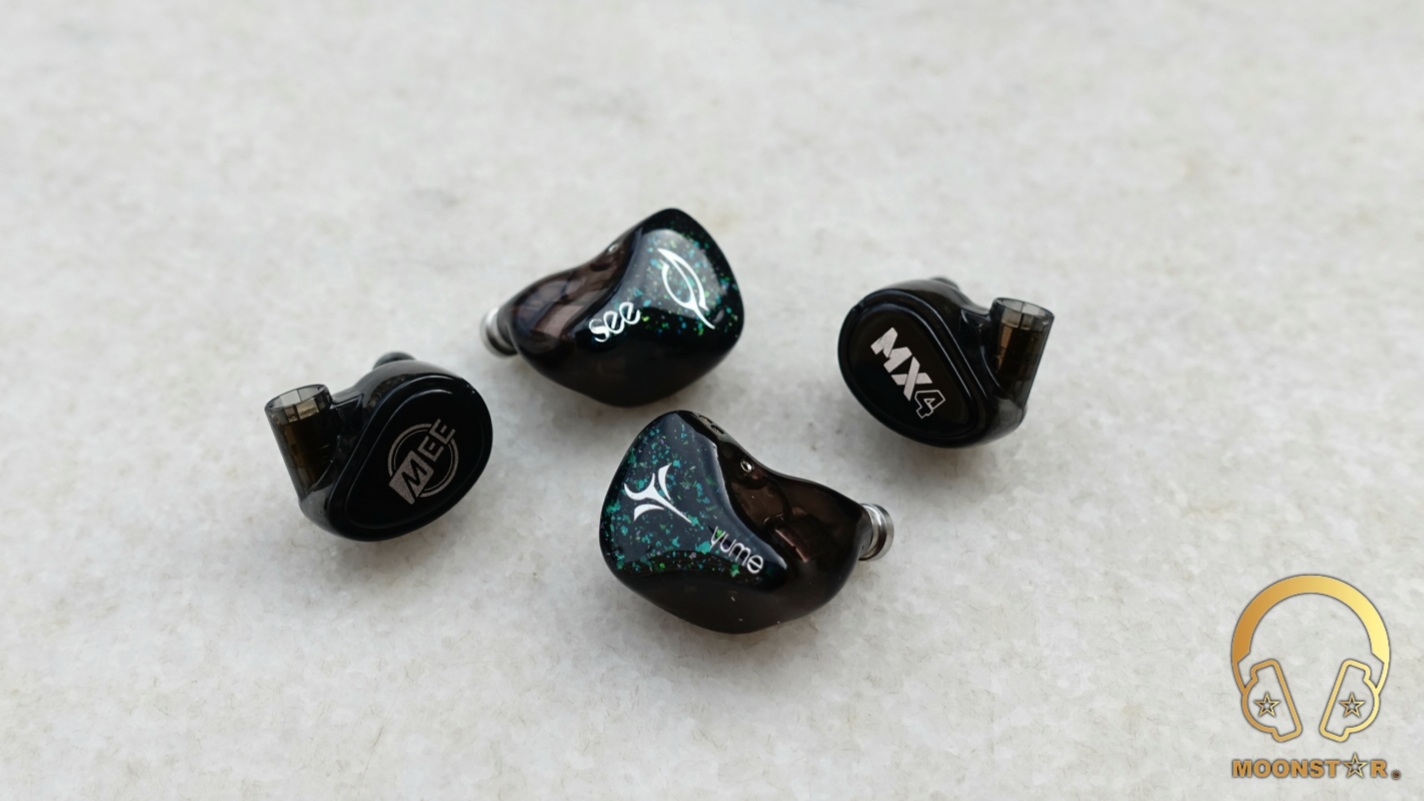 The midrange of the MEE audio MX4 Pro shows a warmer tonality with lower sense of clarity and detail retrieval. The SeeAudio Legacy 4 sounds brighter, livelier and detailed. Male vocals do sound more emotional and full bodied when I do listen to the MX4 Pro, while female vocals are more effortless with the YUME.

The treble range of the MEE Audio MX4 Pro is slightly more pronounced compared to those of the SeeAudio YUME that offers otherwise a better sense of controlled.

Both IEM’s do offers a sufficient performance when it comes to the separation and placement of instruments and vocals. The soundstage of the YUME is slightly wider, while the depth is pretty similar. 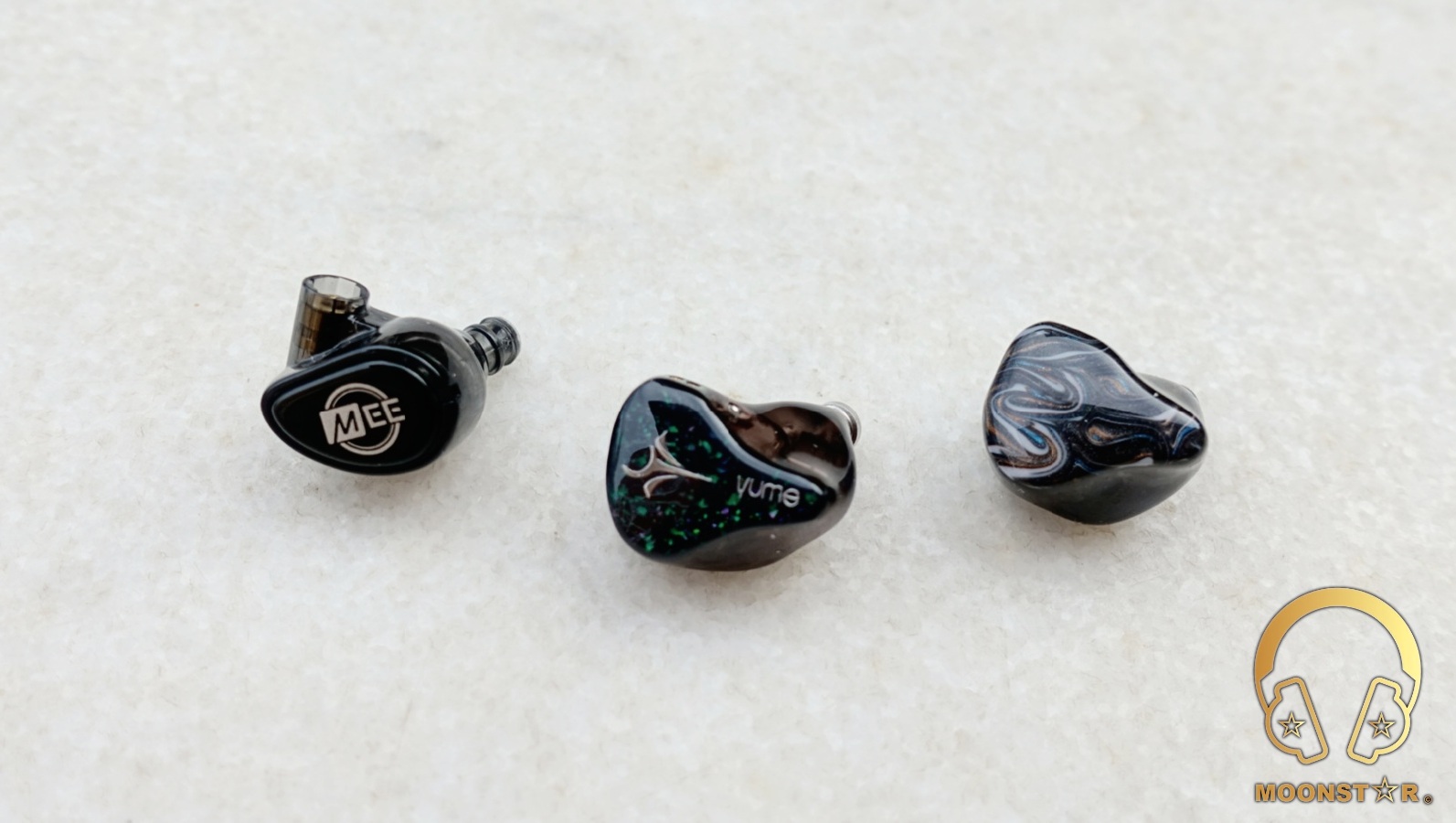 The YUME comes in an attractive fancy box and has a fantastic looking faceplate design that fits perfectly in to my average sized ears, moreover it fulfilled my expectations in terms of sound performance with its highly transparent, energetic and fairly detailed sound tuning. However, If you are looking for a V shaped sound signature you can wait for the MIU!