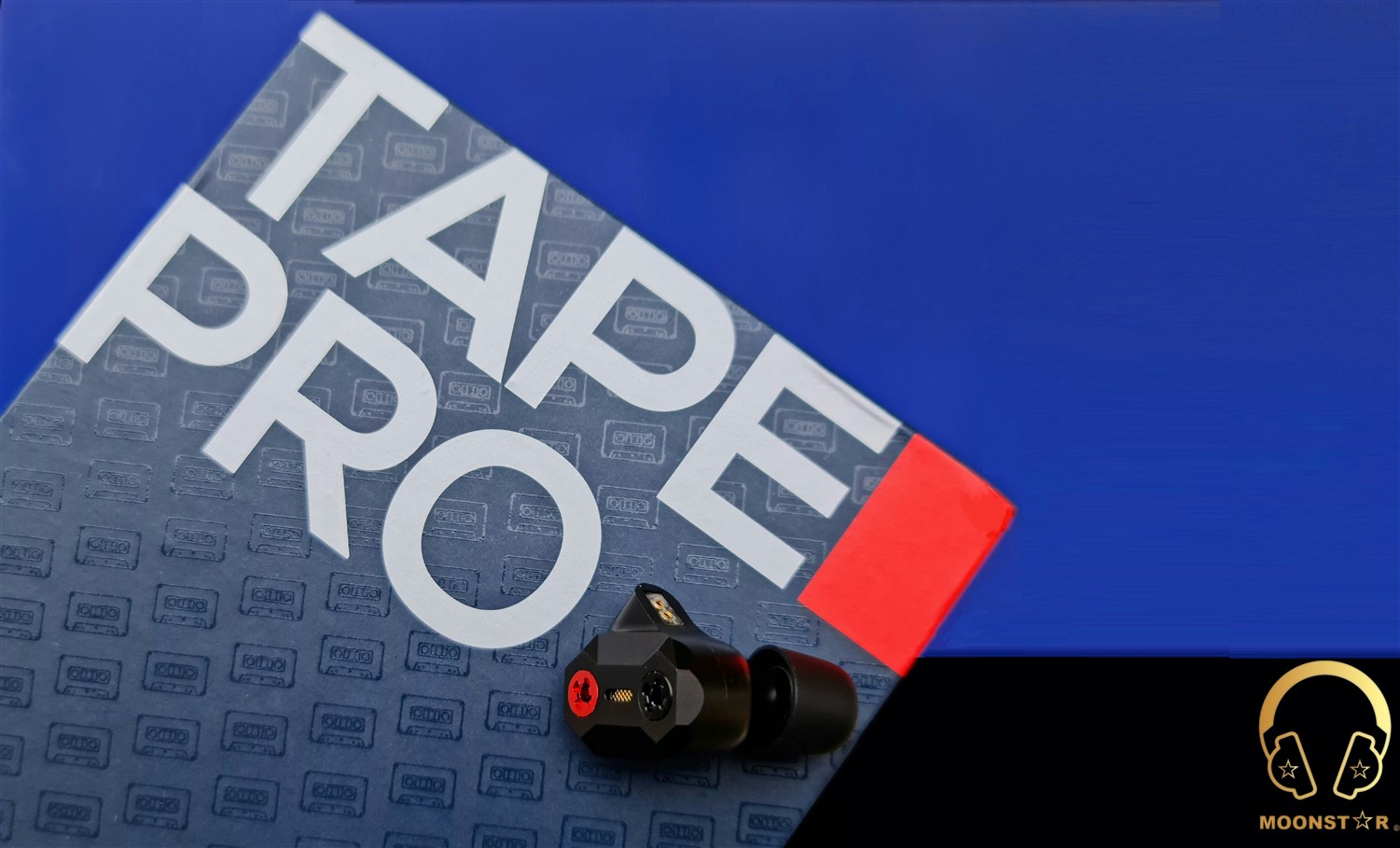 Shuoer was founded in Dongguan, Guangdong (China) in August 2016 by Mr. Du who is a headphone engineer with 20 years of experience in the audio industry.  Shuoer is specialized in the production, design and development of In-Ear Monitors.

The Shuoer Tape Pro is the successor of the original Tape that comes with some multiple updates. The Tape Pro features a so-called MagnetoStatic Hybrid (MSH) driver that is inside the CNC machined metal housing that comes with a detachable cable with 2-Pin connector. 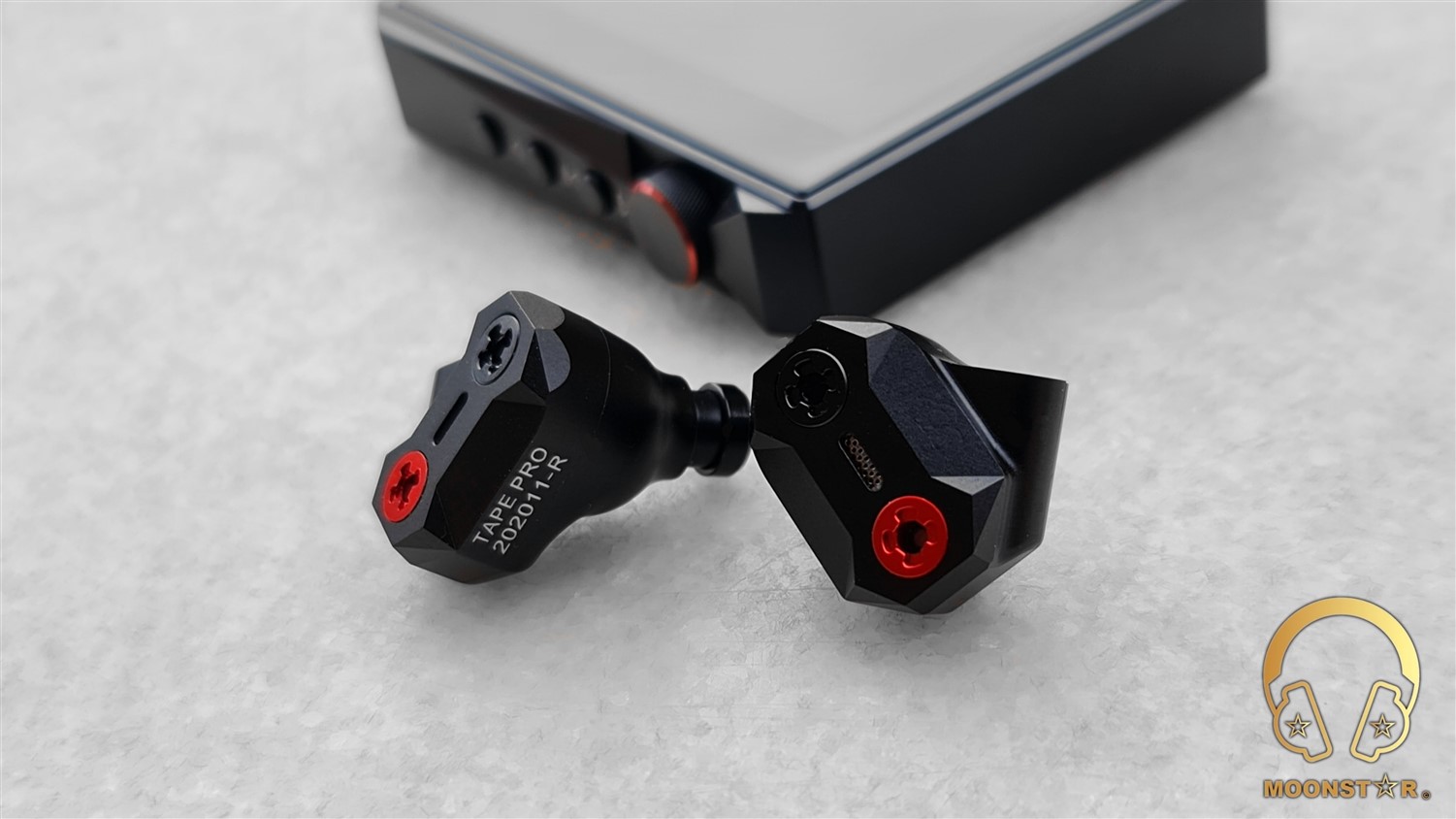 I would like to thank Linsoul for providing me the Shuoer Tape Pro as review sample. I am not affiliated with Linsoul or Shuoer beyond this review and all these words reflect my true, unaltered opinions about the product.

The MSRP price for the Shuoer Tape Pro is $ 129,00 USD and can be purchased under the link below;

The Shuoer Tape Pro comes in a nice box in blue color with that reminds me to the epic Sony TPS-L2 Walkman. If you look closer to the surface of the box, you will see patterns of small Cassettes. 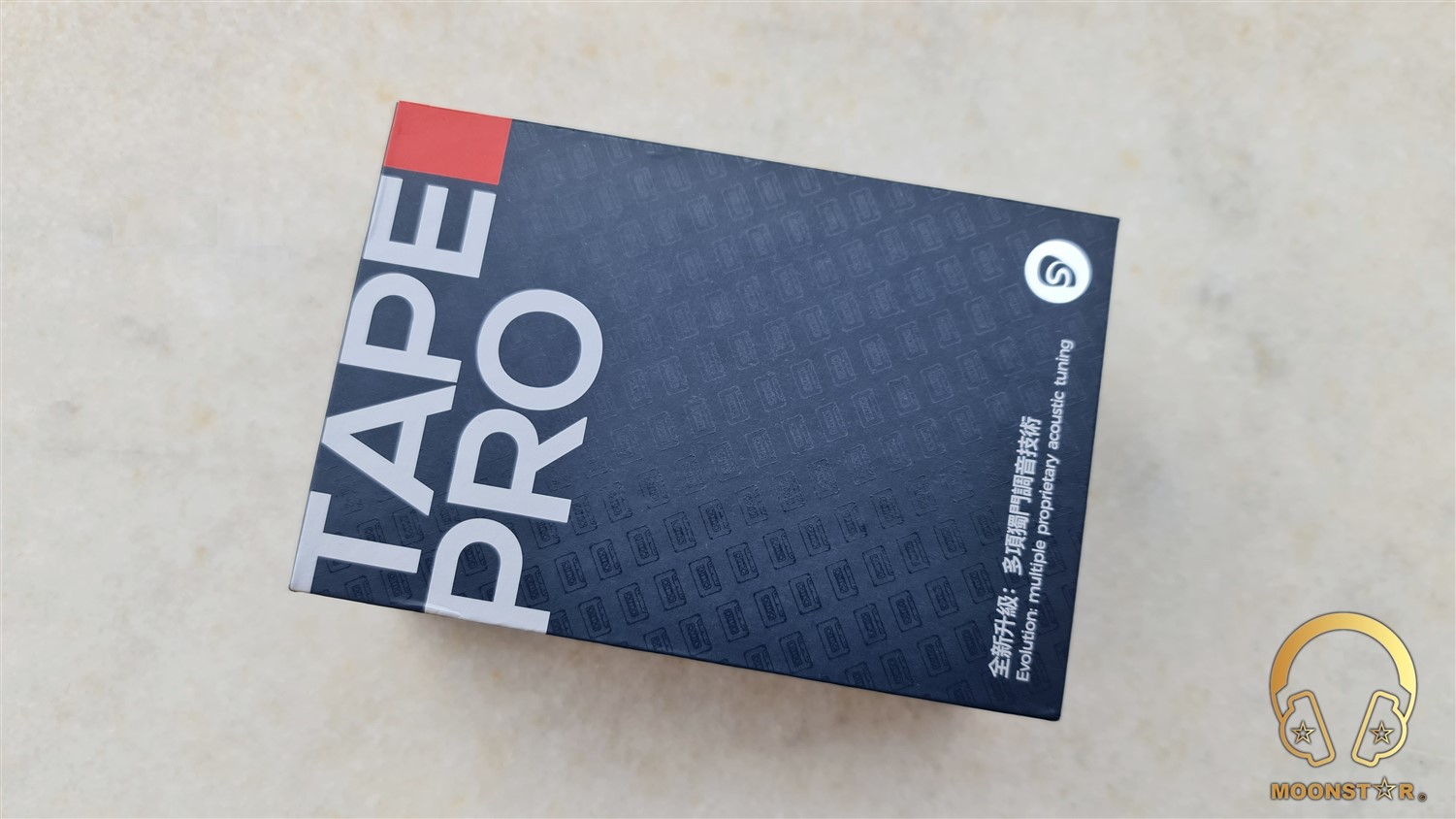 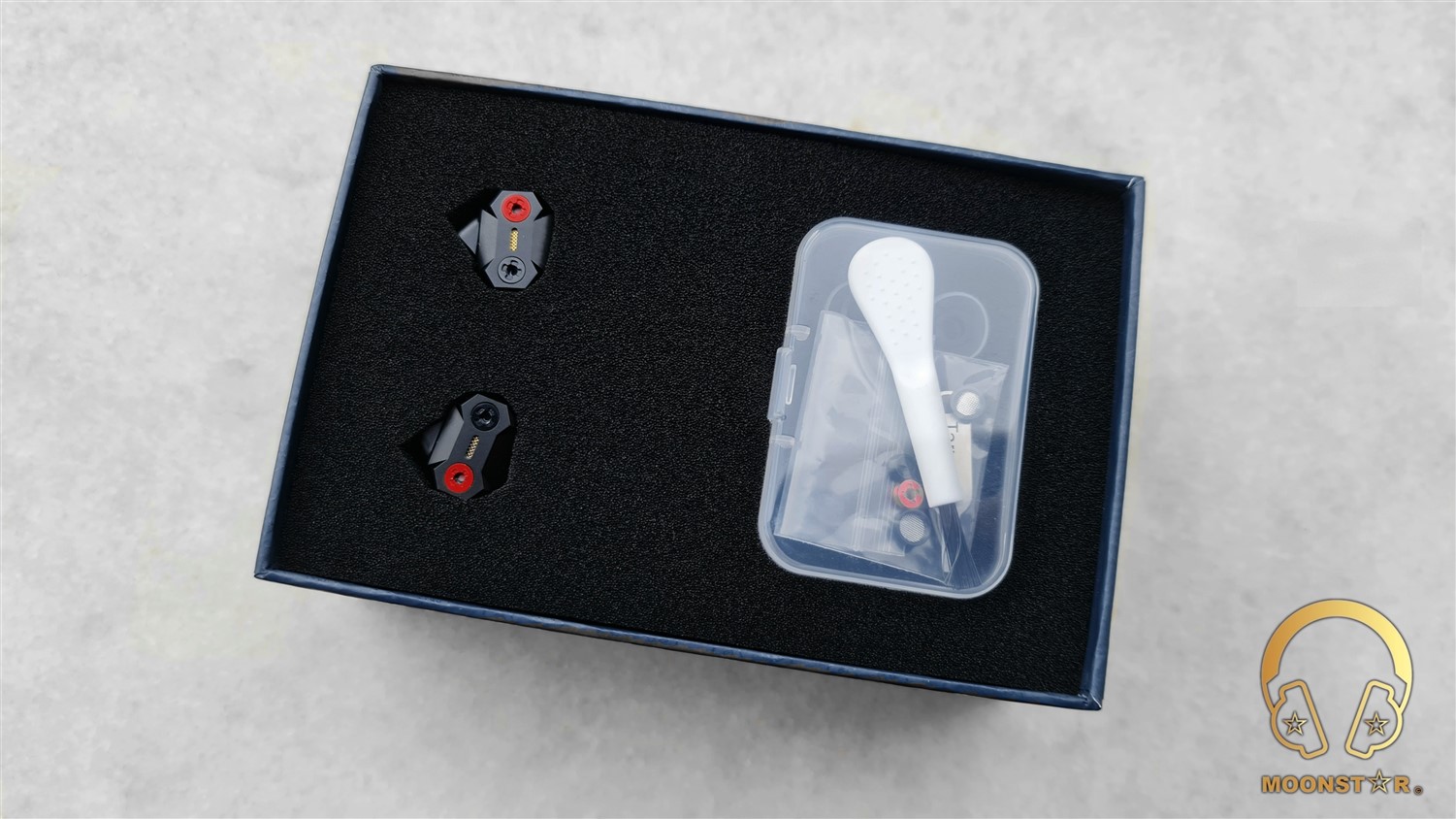 The box of the Tape Pro includes the following items/accessories; 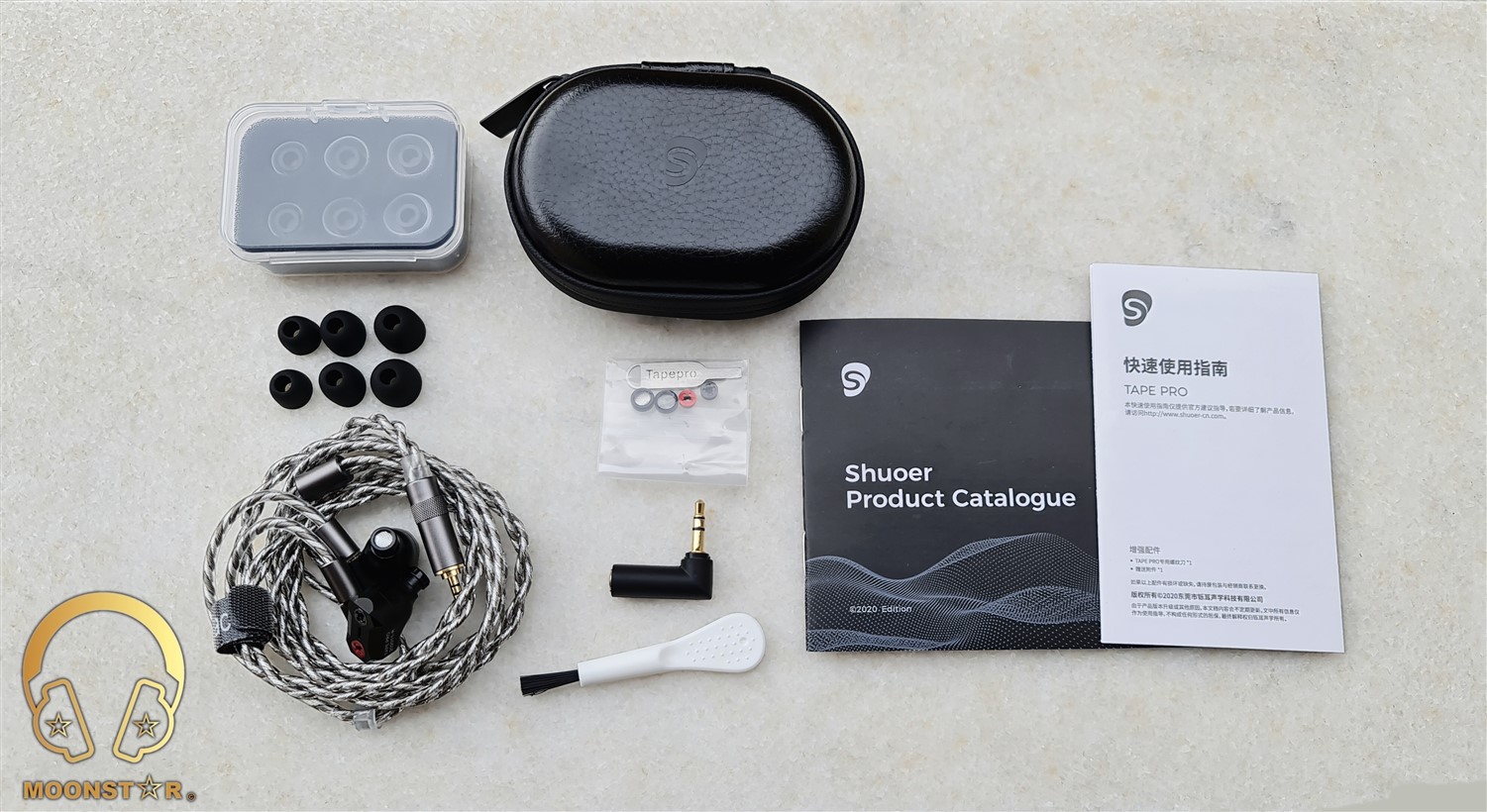 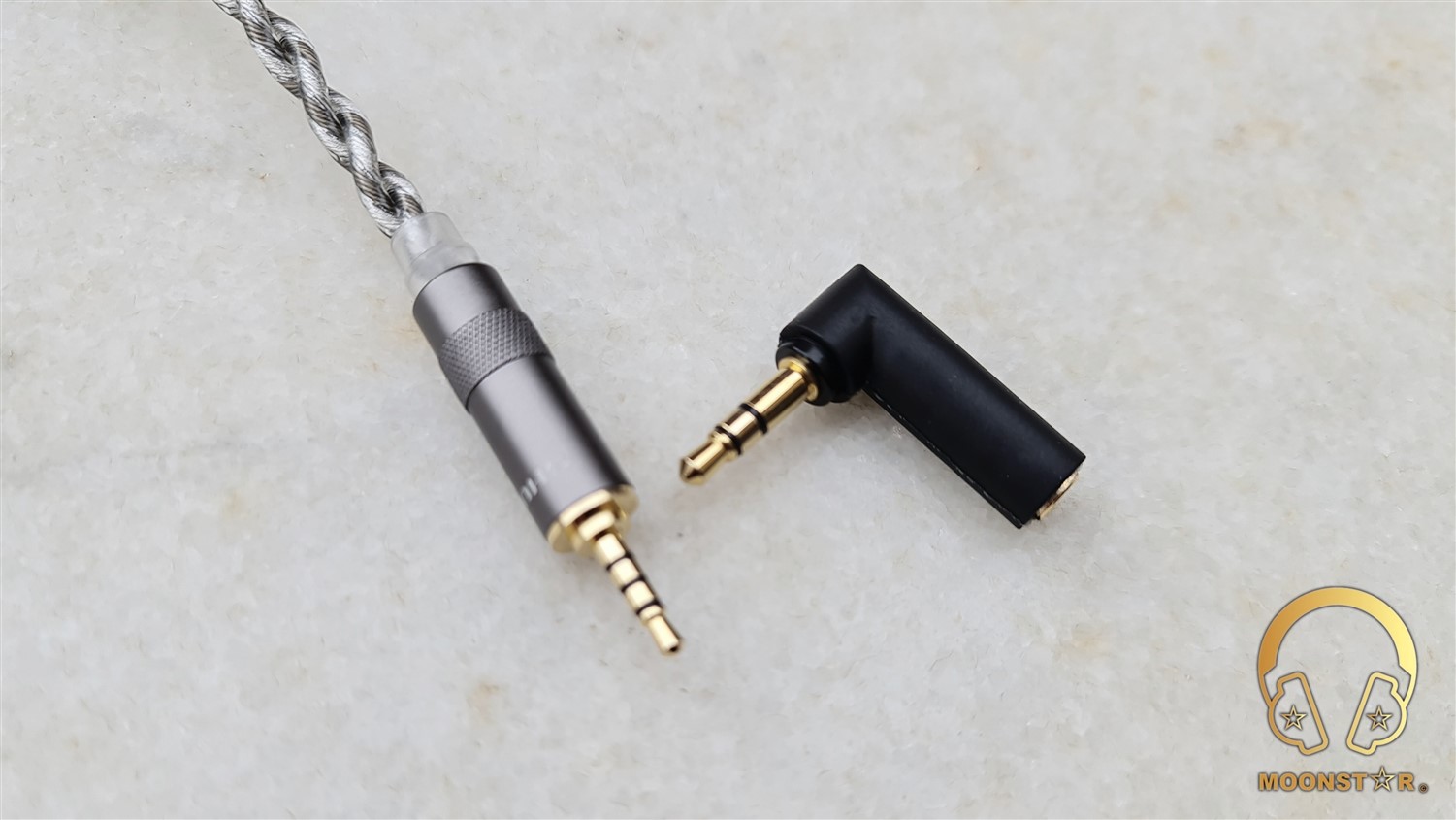 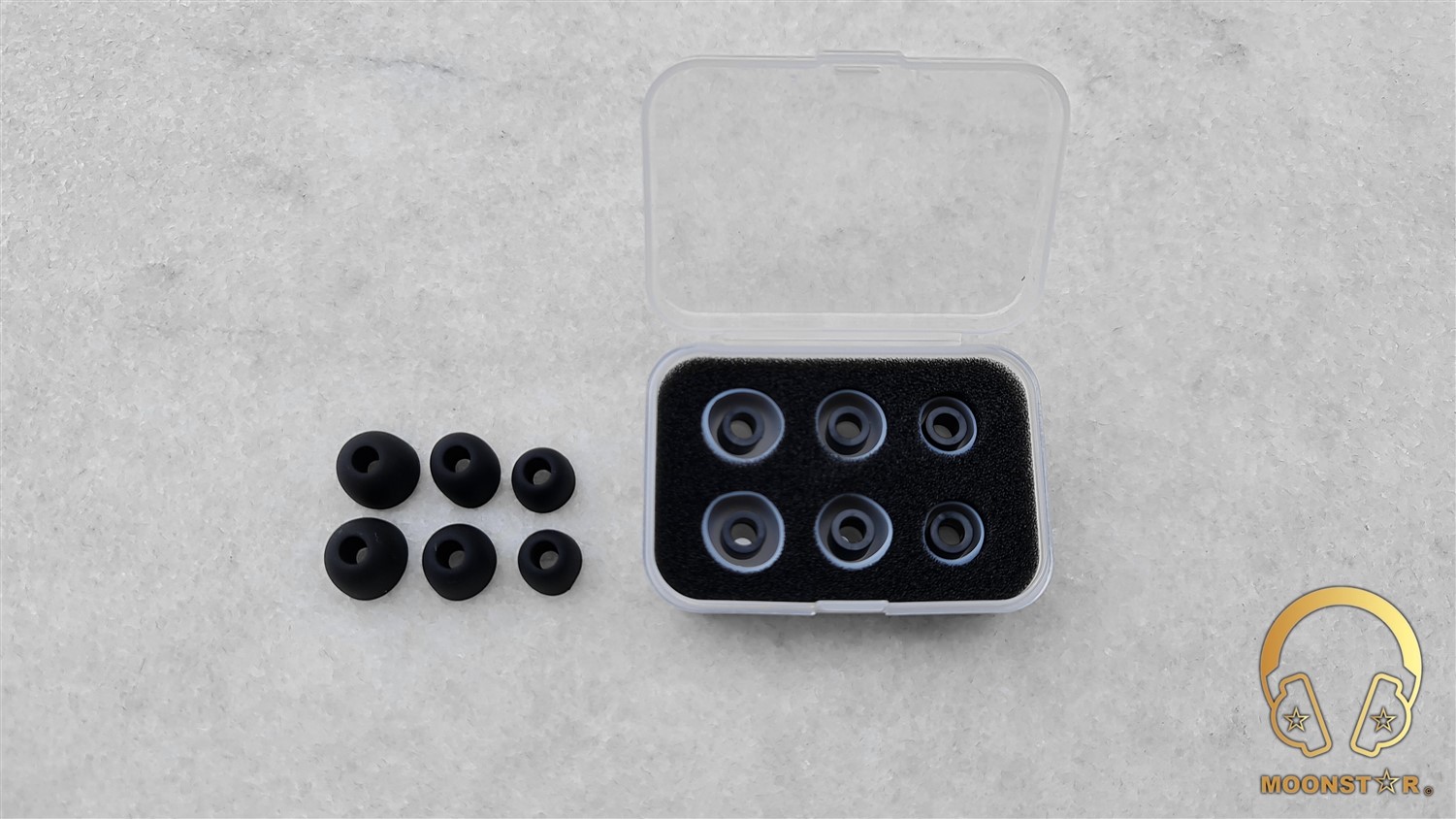 The monitor shell of the Shuoer Tape Pro has a unique shape in a form of a Cassette which is the reason for the model naming “Tape”. The shell of the monitor is made of CNC machined metal material and is available in black and silver color options. The Tape Pro is a very well-crafted In-Ear Monitor and doesn’t show any noticeable imperfections like burrs or gaps. 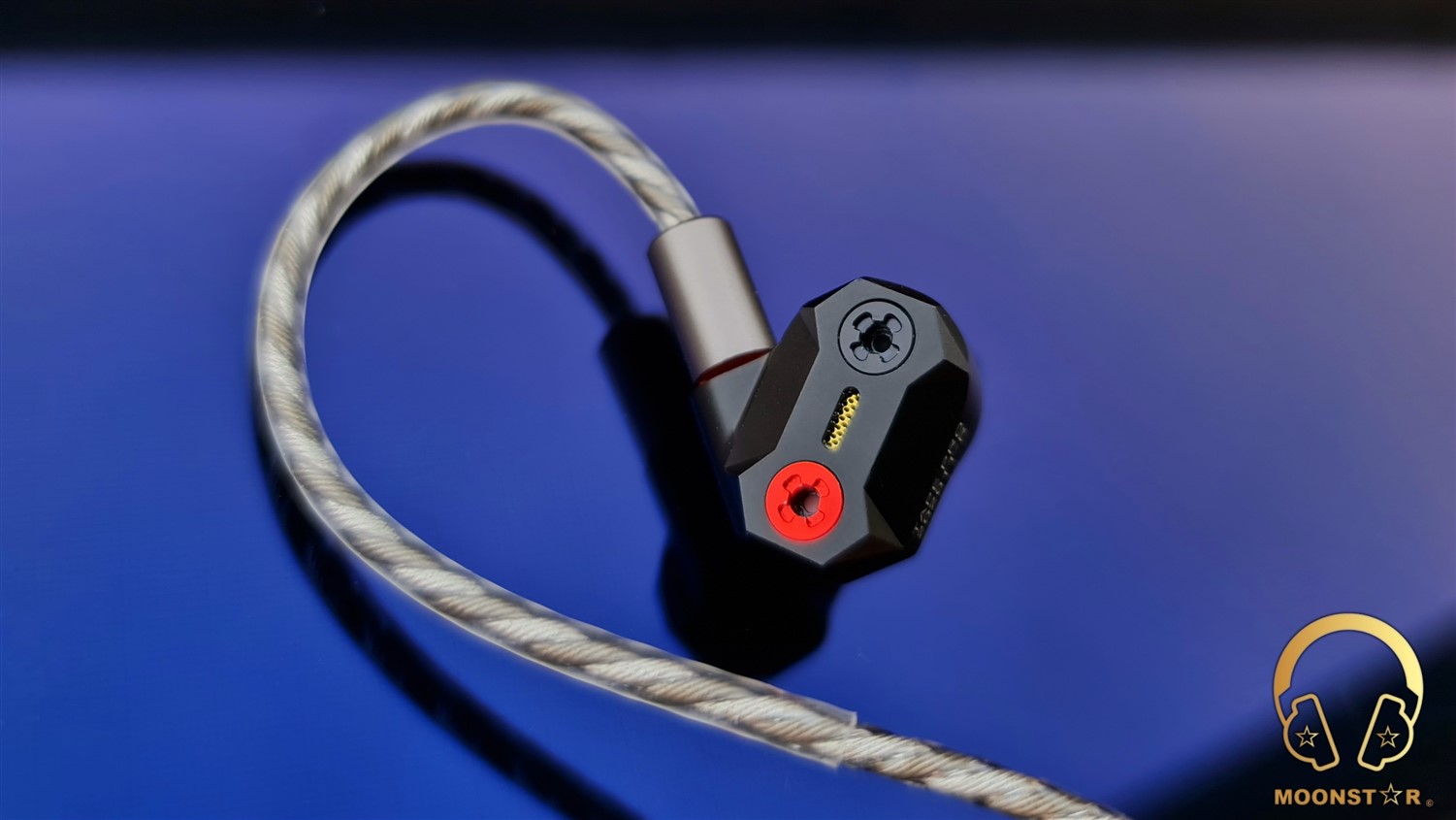 The front of the monitor shell is the face of the Tape Pro with the form of a Cassette that are in reality parts like the sound tuning filters and a vent with a metal mesh on the top. 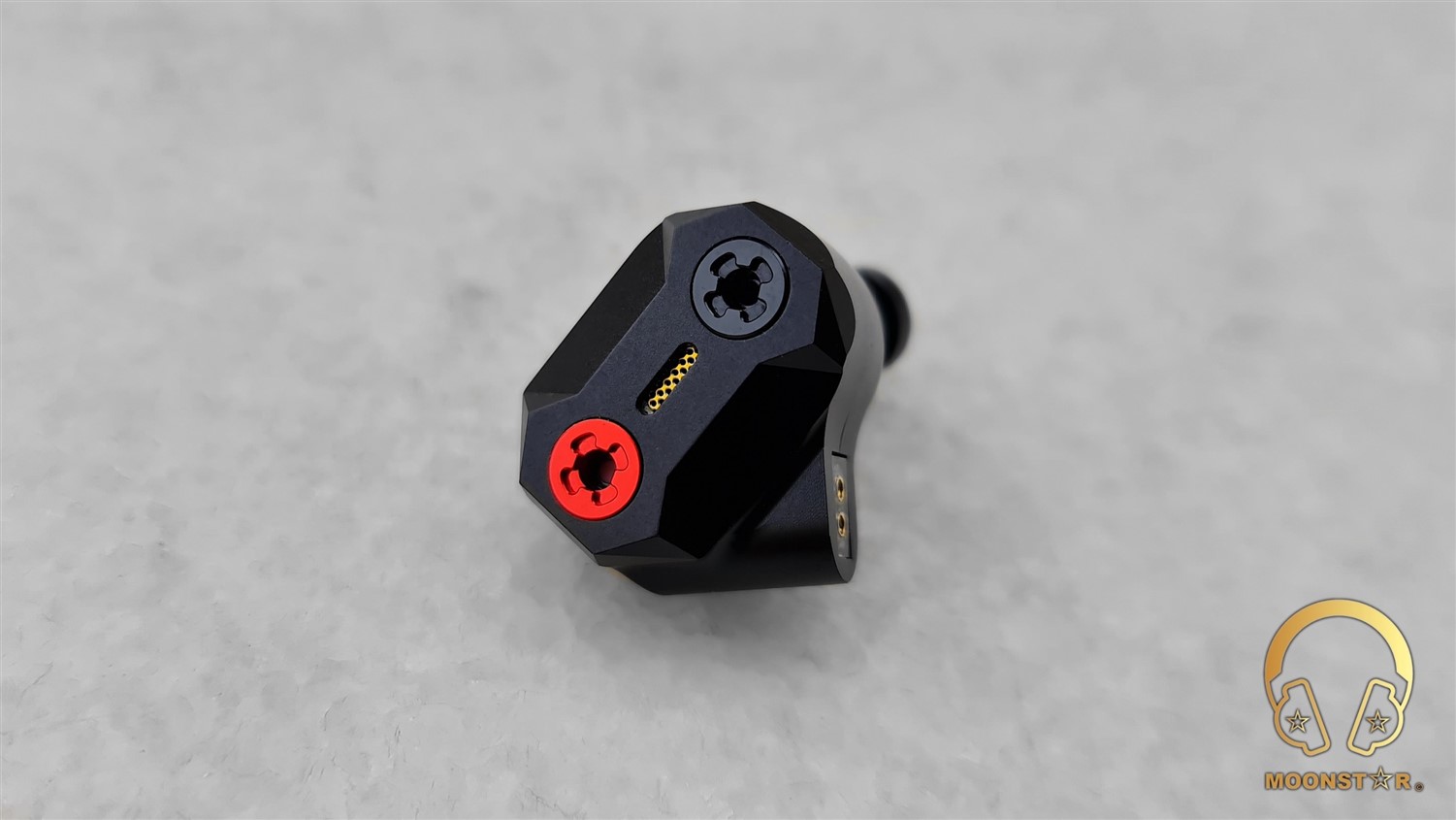 At the rear side of the monitor is an elevation with the sound nozzle on the top. 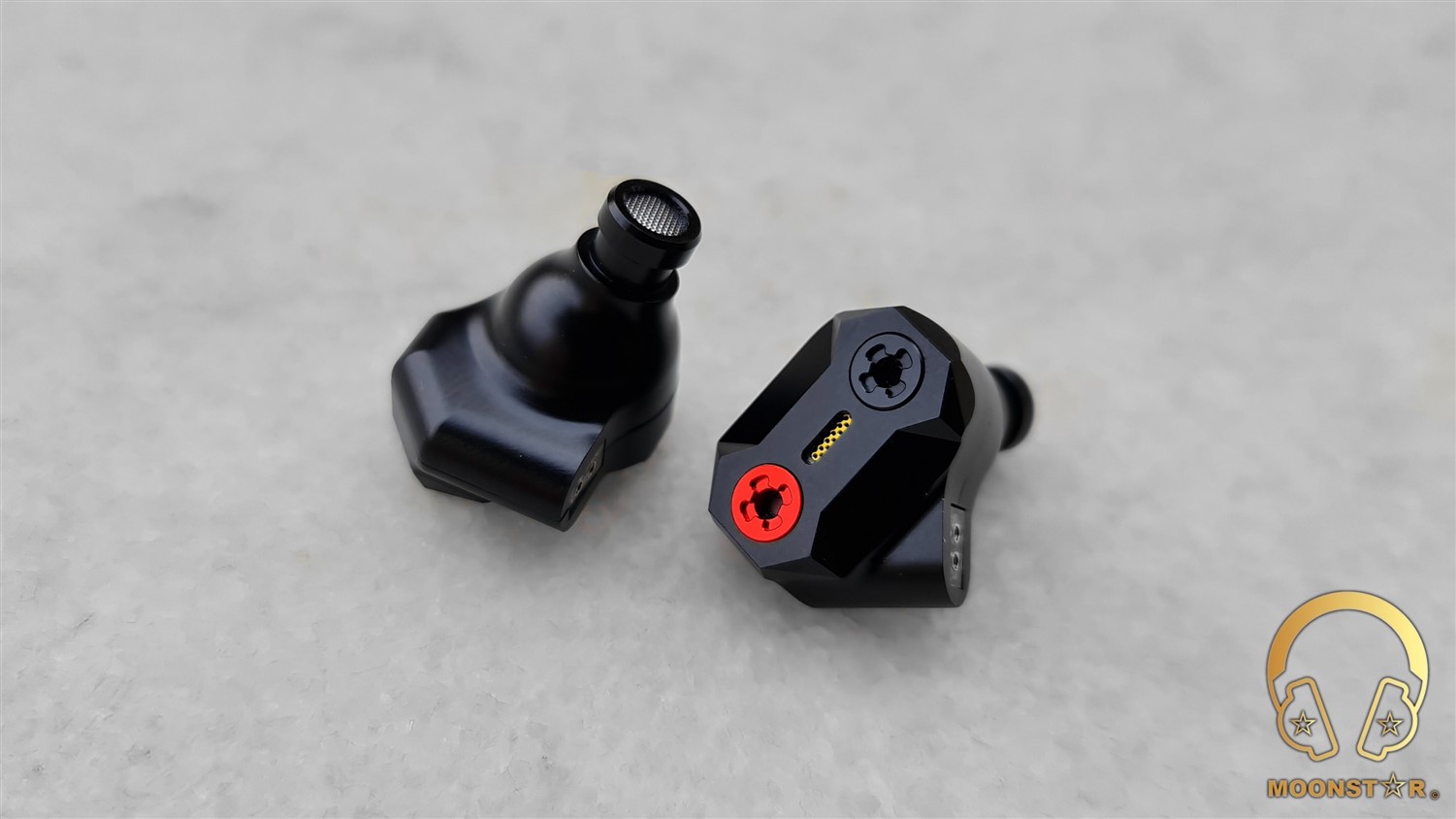 The sound nozzle has a filter with a fine metal mesh on the top that can be easily replaced (comes with 1 pair of backup). 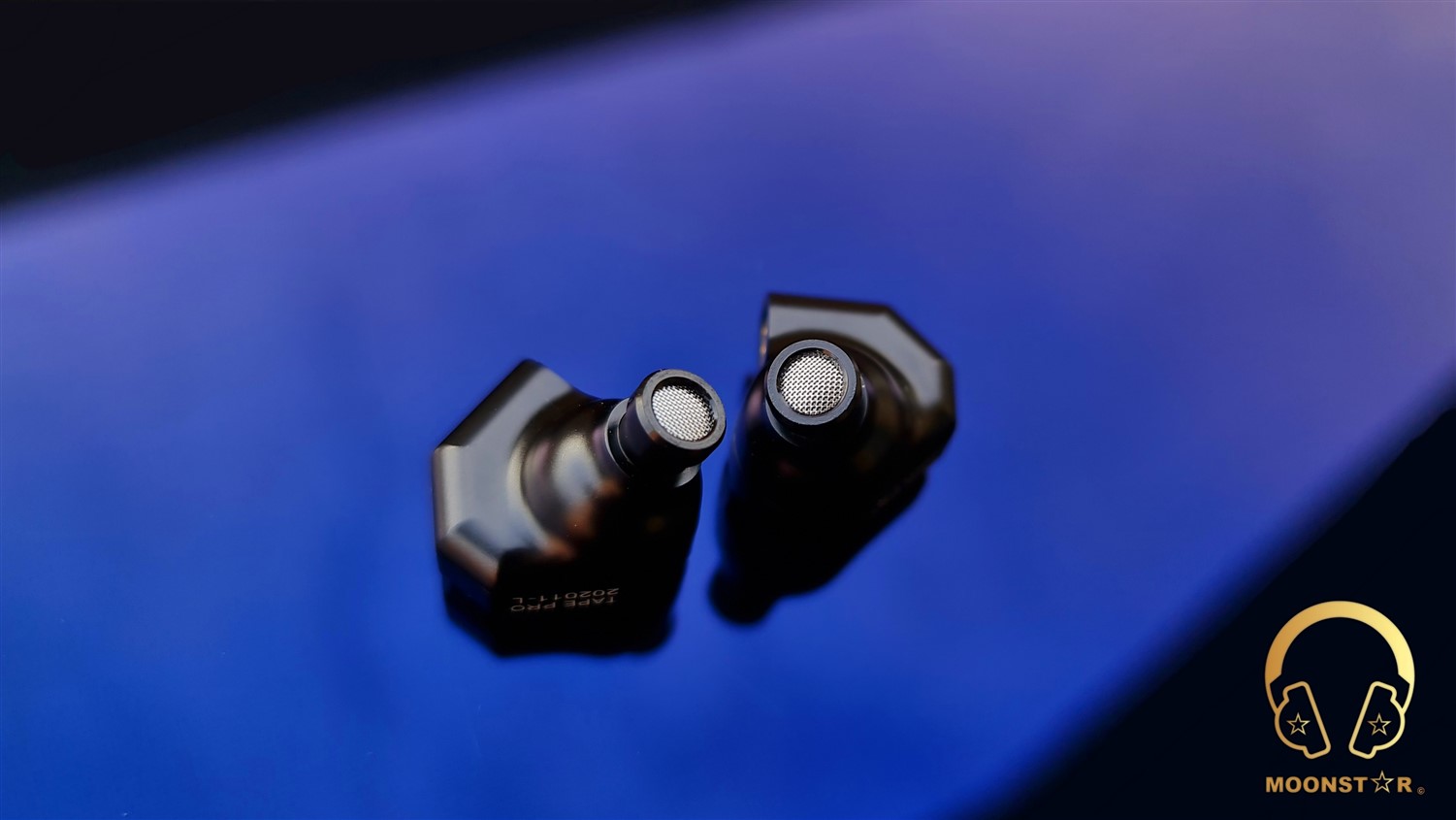 This nozzle filter is not for sound tuning purposes and does only help to prevent the insertion of small particles like ear wax and dust in to the monitor. 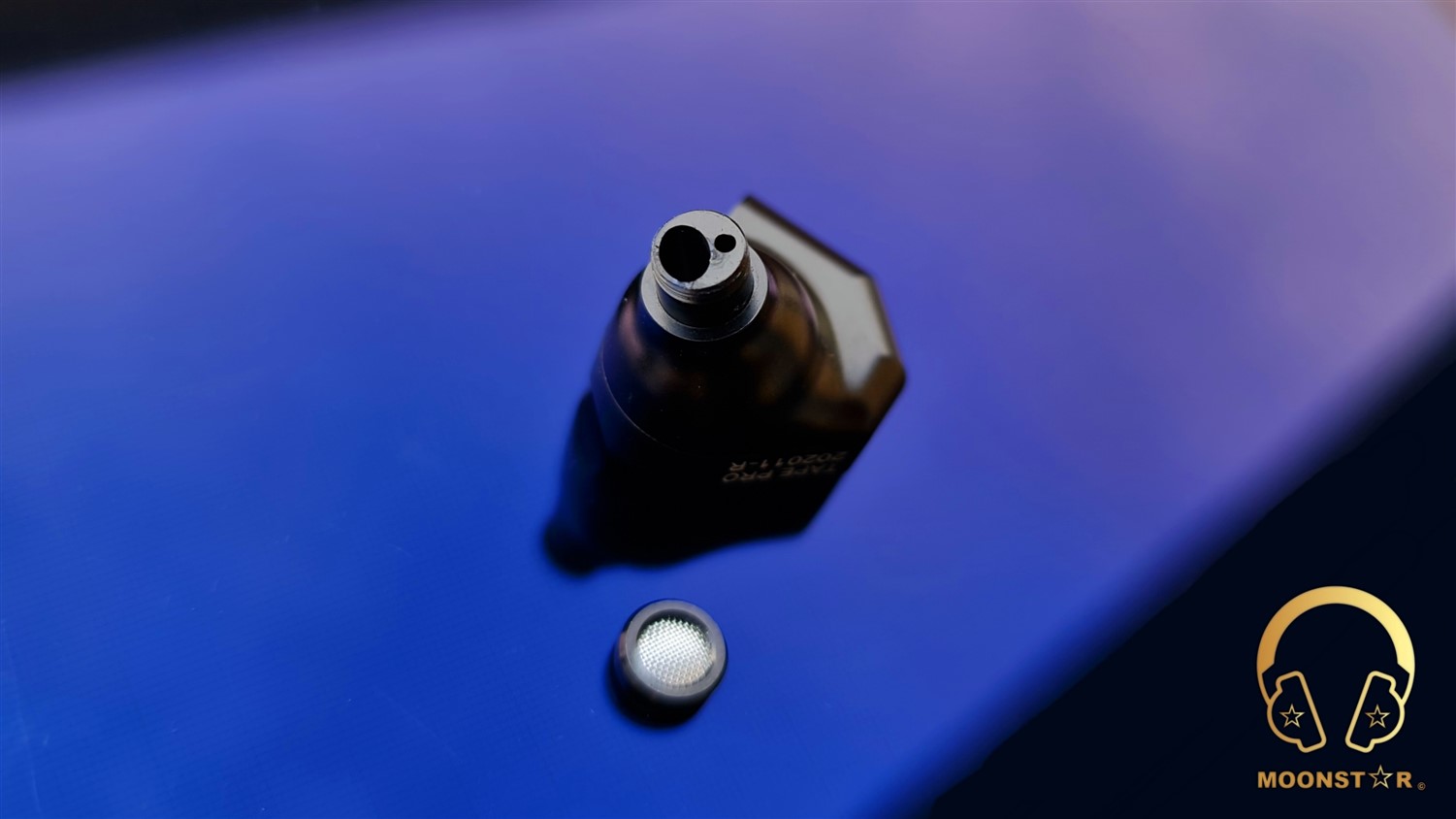 On the top of each monitor shell is the 0.78mm diameter 2-Pin that feels pretty sturdy. 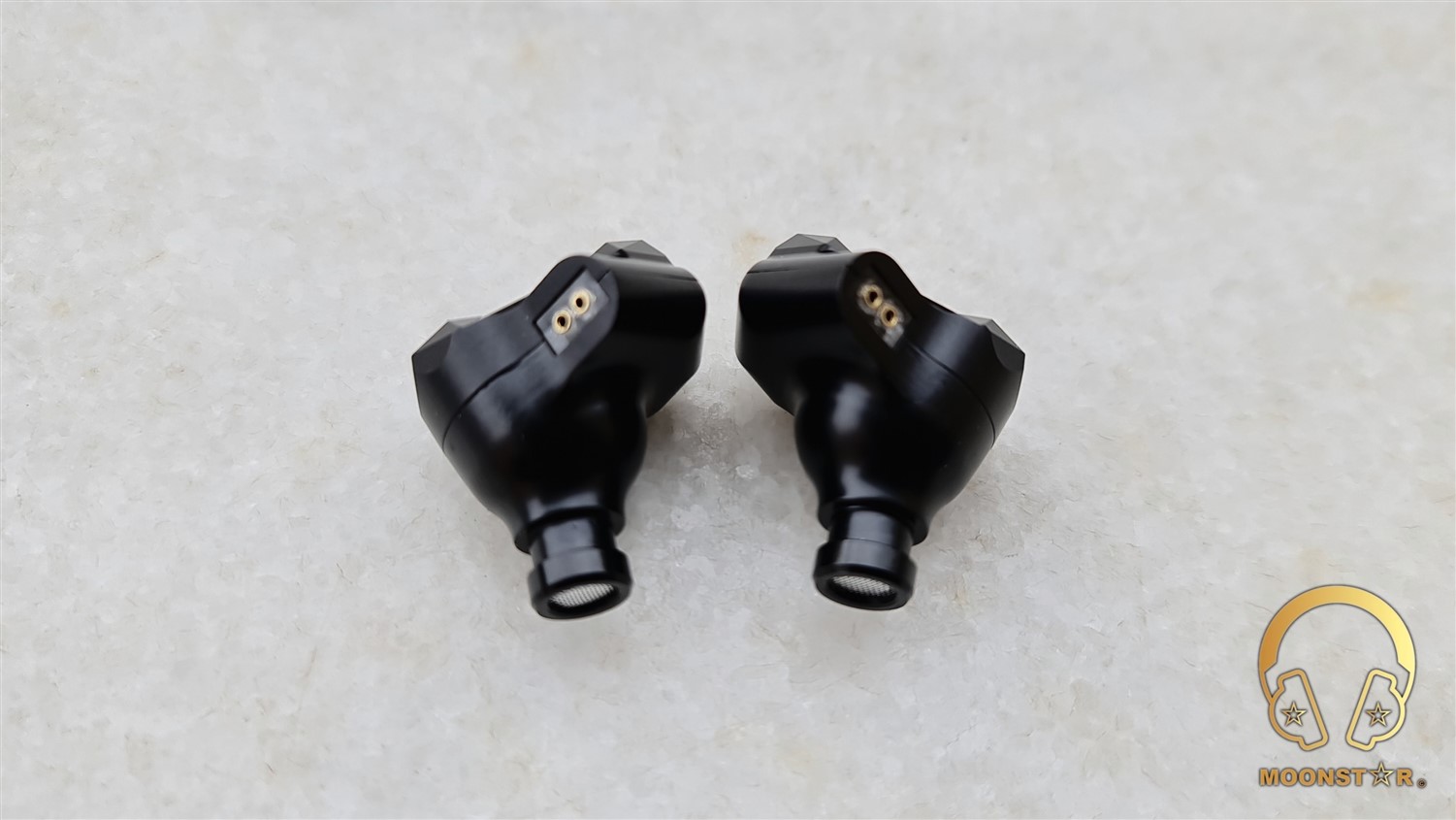 At the bottom of the shells are the L & R markings and some product related information’s (serial number, model, etc.)

The cable of the Shuoer Tape Pro is made of high purity 6N monocrystalline Copper Wire material with a pretty soft and flexible PVC insulation that shows only a very low amount of microphonic effects. 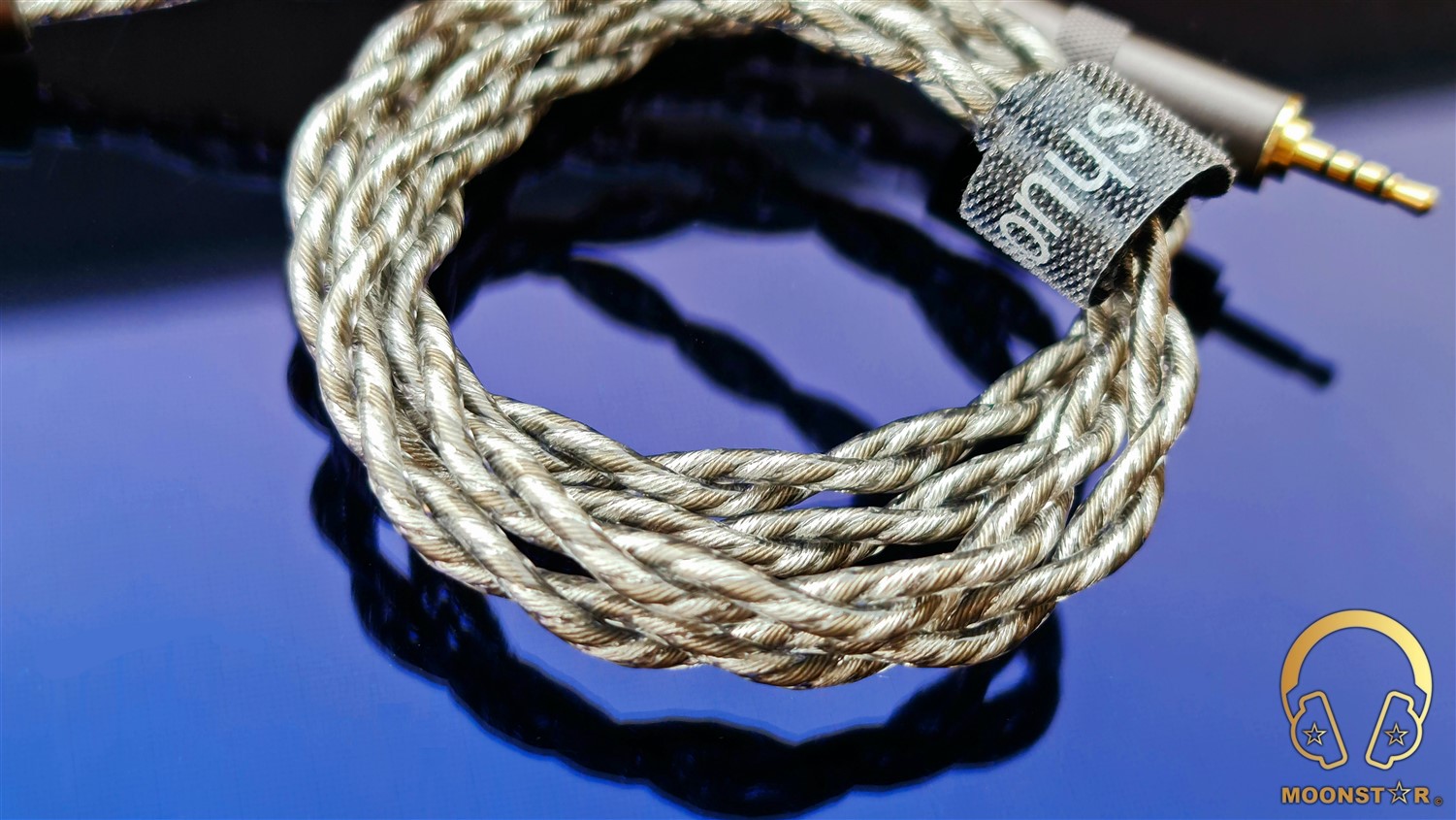 Near the left and right connectors are transparent heat shrink ear guides for extra comfort on the go.

There cable has a metal Y splitter and transparent plastic chin slider. 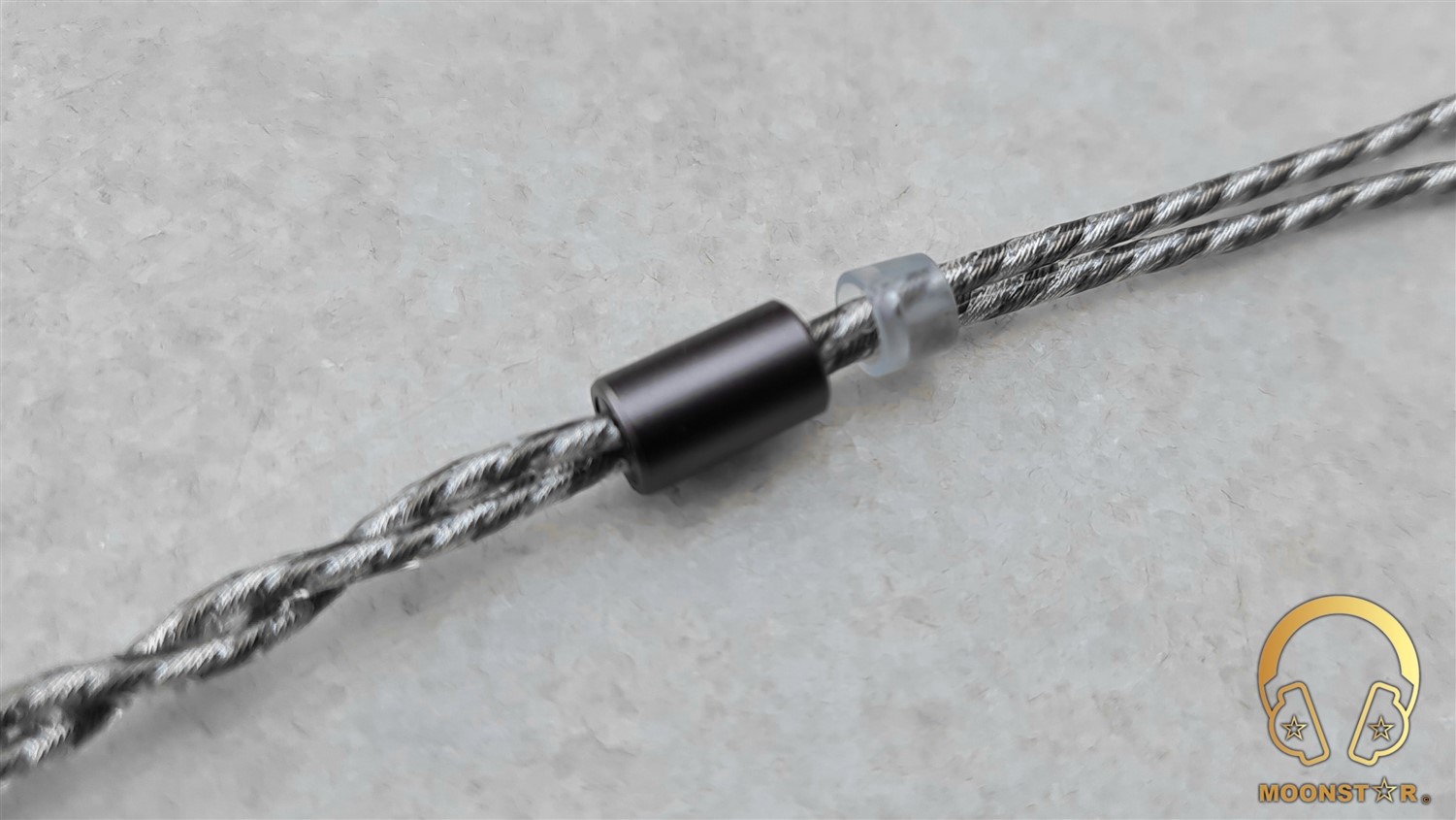 The cable comes with a 2.5mm single ended headphone jack has a metal housing in gun grey color with a straight profile. 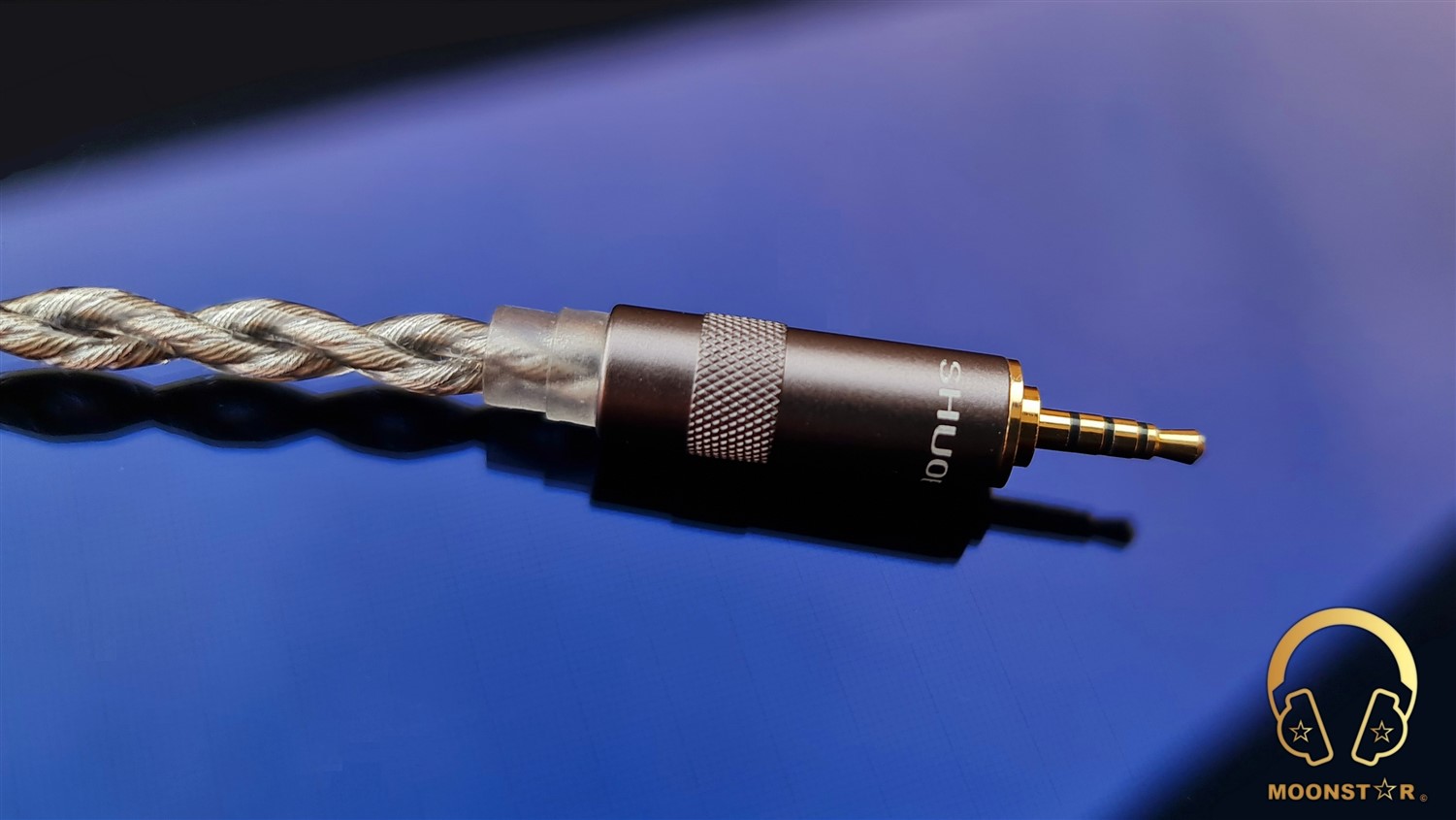 The 2.5mm Balanced to 3.5mm Single Ended Adaptor has an L-angled profile with a plastic housing which is a nice addition.

The overall build quality of the Shuoer Tape Pro is of high quality.

The all metal housing of the Shuoer Tape Pro sits pretty comfortable in my ears, while I believe that people with smaller sized ear concha could maybe feel not that comfortable due to the shape of the monitor edges.

The performance of the Tape Pro in terms of noise isolation is on an average level and is quite acceptable for the use in relative noisy environments like metro, bus or train.

The Shuoer Tape Pro is relative easy to drive with its sensitivity of 105dB and low impedance of 18Ω, but it shows its true potential if you use it with a more powerful source like a Portable DAC/AMP or DAP while it shows a good synergy with the iBasso DX220 MAX and Hidizs AP80 Pro, but sounds not that good with the FiiO M11 Pro and iBasso DX160. 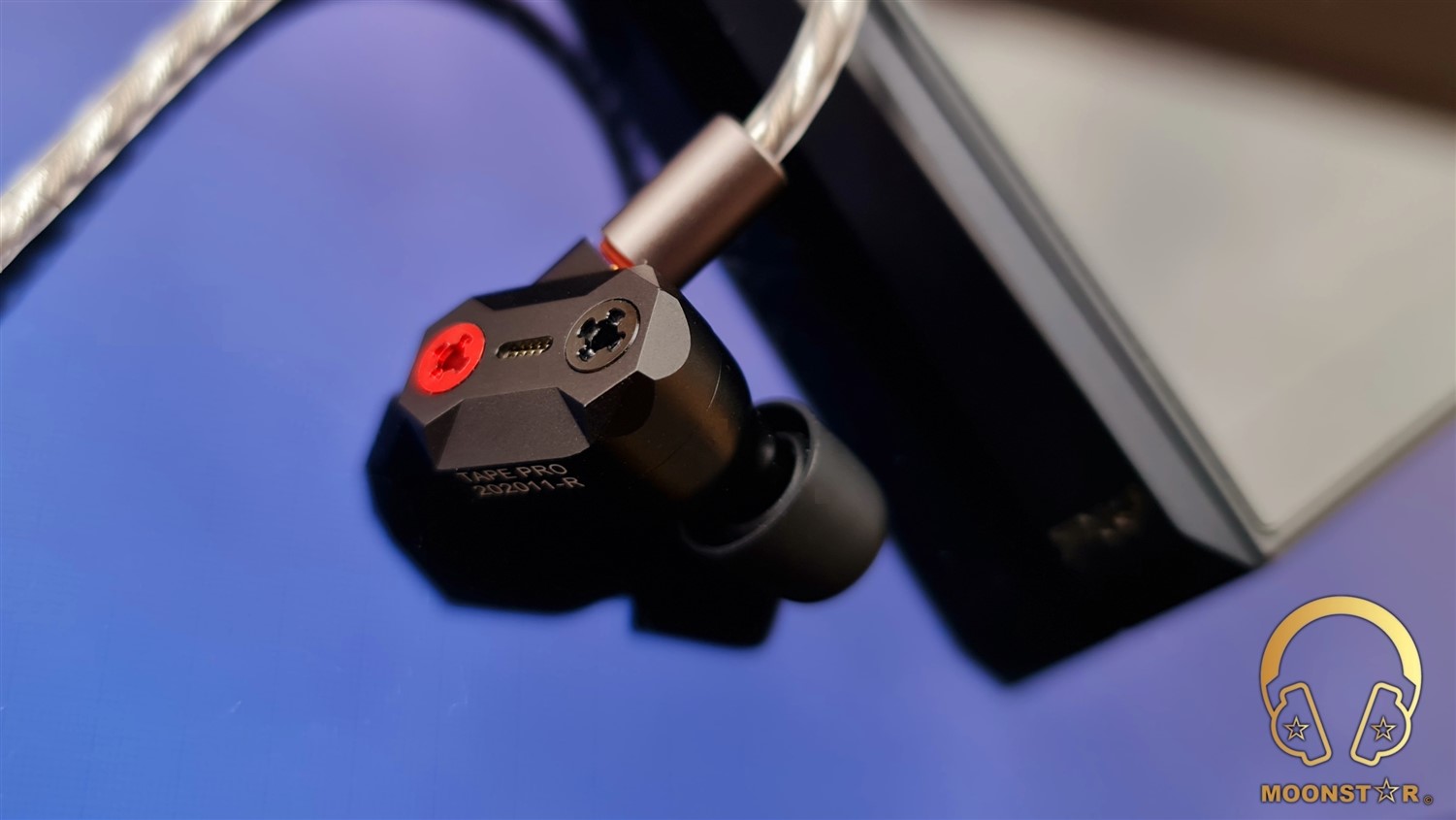 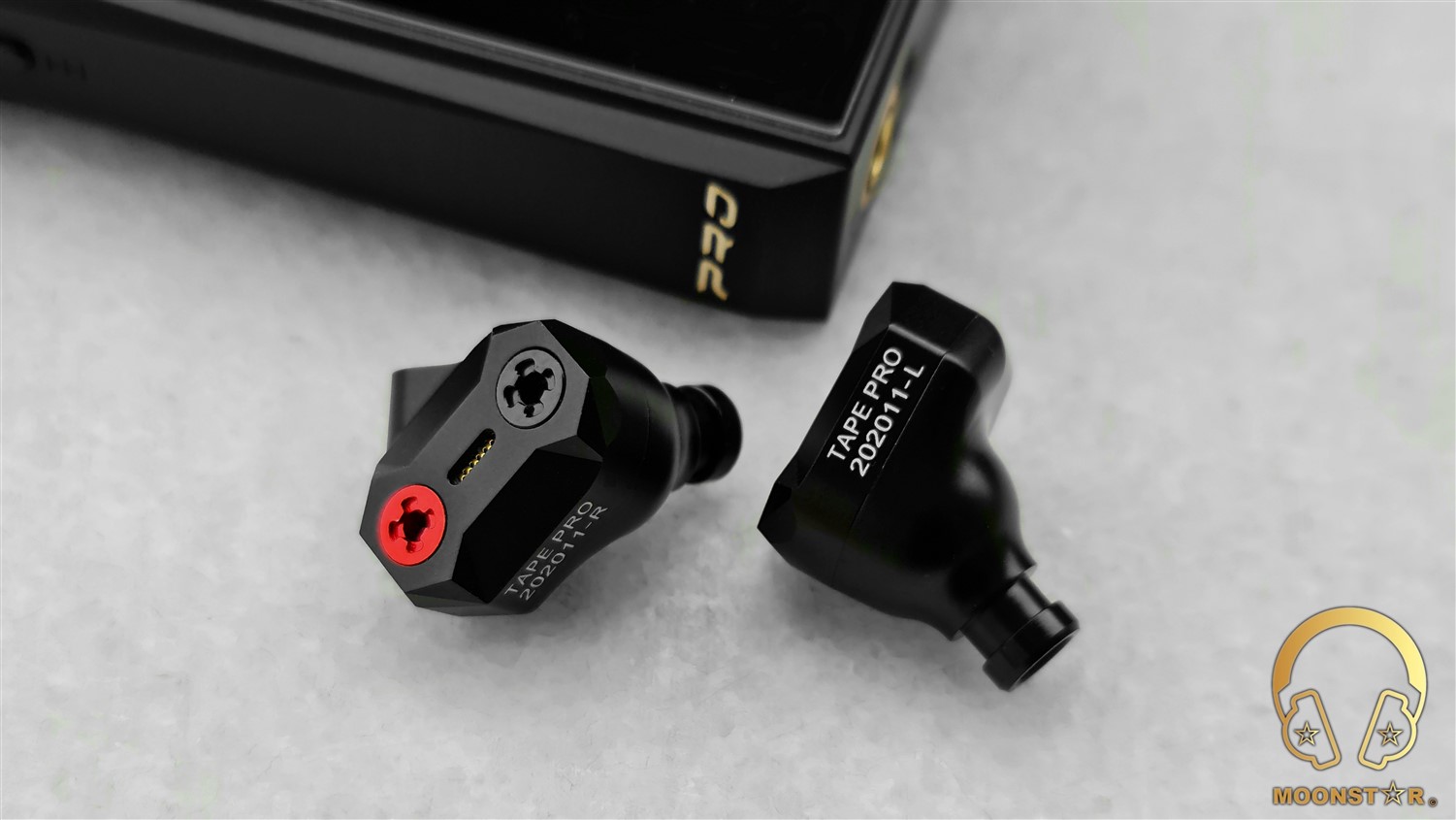 The Shuoer Tape Pro has a close to neutral tonality with a hint of warmness and slightly amount of coloration. The bass shows a pretty good level of depth, the midrange has a mildly warm tonality, while the upper midrange and treble regions are smooth and soft in its presentation.

Please note that Tape Pro is a quite sensitive IEM that is relative sensitive in terms of performance when it comes to the source (synergy) and to the quality of the tracks (poor recorded songs) you are listening with it.

The review below is written after a burn-in process of 50 hours and is based on my experiences with the stock cable, stock black silicone ear tips and the balanced sound tuning filter. 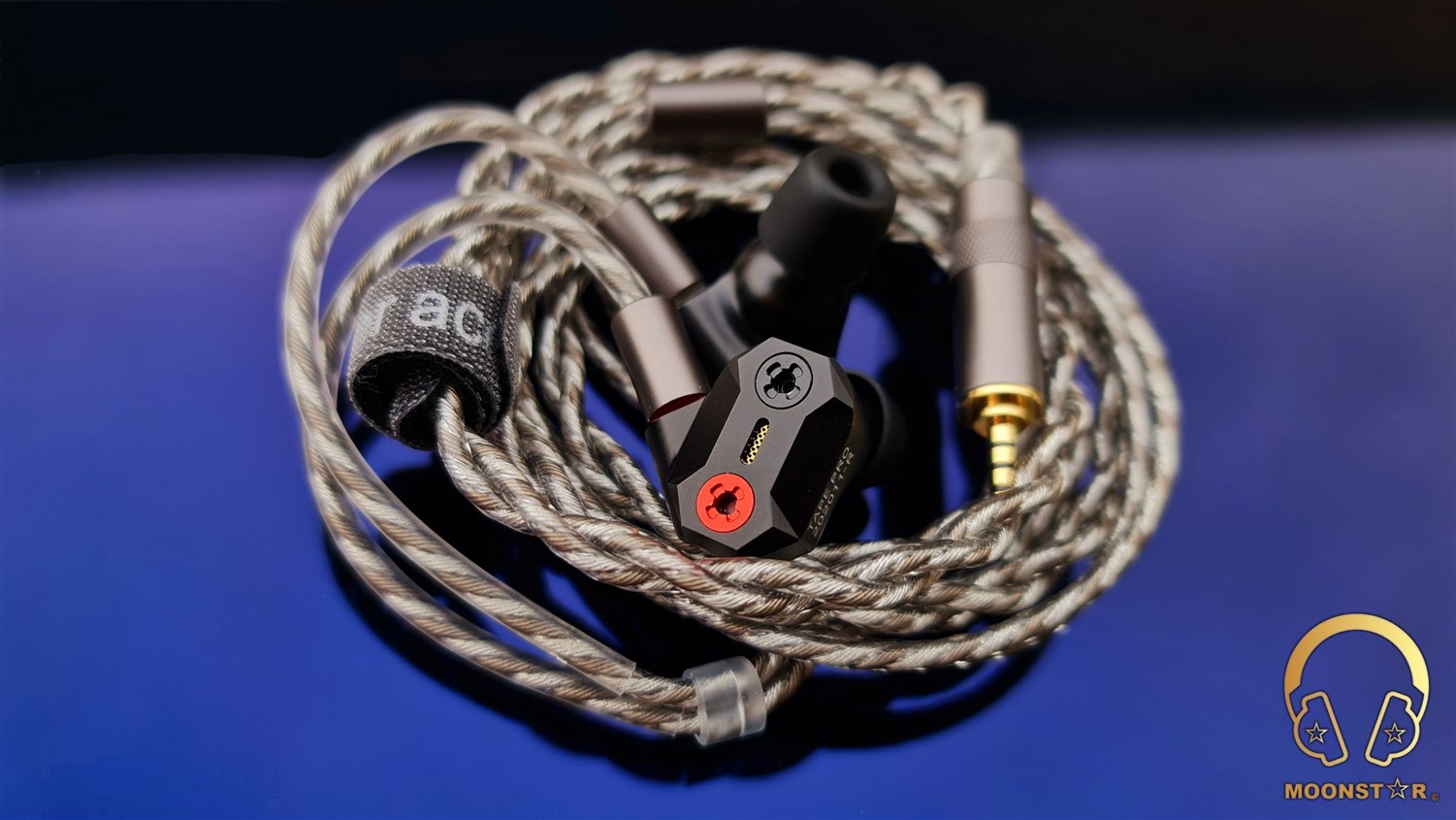 The bass performance is one of the remarkable highlights of the Shuoer Tape Pro. It didn’t listen to the original Tape variant, but to be honest, the Tape Pro sounds pretty good with genres like Hip-hop, Pop, EDM or Trance music. The bass has a warmer and softer tonality compared to the rest of the sound spectrum.

The subbass of the Shuoer Tape Pro has good depth and great amount of rumble that will satisfy most listeners. Songs like Lorde’s “Royals”, Gogo Penguin’s “Raven” and Photek’s “The Hidden Camera” are represented with a good level subbass depth, extension and intensity, which means also that the Tape Pro is able to overcome songs with complex passages.

The Tape Pro has a fairly controlled, warm, somewhat loose and accentuated midbass presentation, while this frequency region shows slightly more intensity compared to the subbass area. The midbass do cover a quite large area that leads sometimes to midbass humps. The midbass can slightly leak in to the midrange area, especially when you do listen to poor recorded tracks.

The bass of the Shuoer Tape Pro has a moderate level of speed, which may not ideal for fast genres like metal music, but quite enough rock or pop music. I highly recommend the Tape Pro for those who are searching for an In-Ear Monitor that do give a high value for the bass performance.

The bass filter of the Shuoer Tape Pro offers a slightly difference compared to the balanced filter. The main difference of the bass filter is the increase of the subbass depth and the midbass intensity.

The Shuoer Tape Pro has a relative neutral midrange presentation with a mild amount of coloration. The tonality is slightly warm while the level of transparency is on a moderate level. The general tonality of the midrange is a bit unnatural compared to other IEM’s at this pirce range that I have listen befor.

The Shuoer Tape Pro has a somewhat V shaped sound signature, but the vocals are in general more upfront positioned compared to instruments. Male vocals do have a good level of fullness/body and depth thanks to the lower midrange tuning, while female vocals do sound a bit thin due to the average lower treble and above average upper treble intensity, especially audible while listen to mezzo-soprano and soprano voices. Male vocals do sound pretty clear and detailed, without to show unwanted situations like muddiness or mixings. Female vocals do sound fresh, slightly warm and musical thanks to the moderately pronounced and soft upper midrange tuning, which do avoids also unwanted sibilance and harshness. 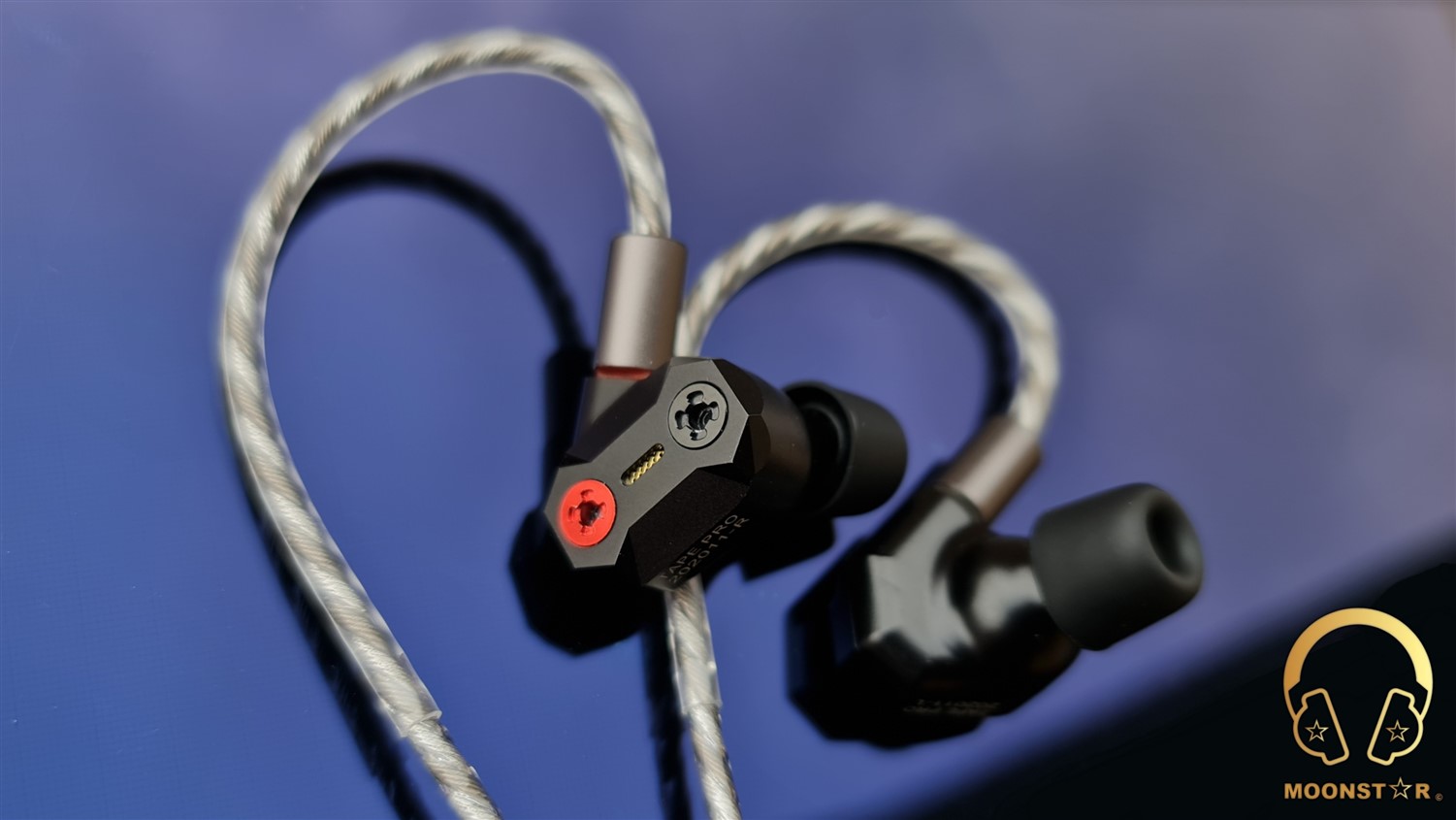 The Tape Pro has in general a slightly warm and fairly full bodied instrument tonality that doesn’t have a too dry or analytical timbre. The instrument presentation is airy and clean since it is able to produce a pretty neutral air between them.

The Tape Pro is a quite successful IEM for its price when it comes to the instrument clarity, detail retrieval and separation. Instruments like guitars do sound pretty musical and soft; do show a warm tonality and do have a slightly bassy presentation. The pianos on the other hand are soft, a bit shiny, without to sound overly sharp in Chopin’s Nocturn’s or Fazıl Say’s Oratorios.

The Shuoer Tape Pro shows in general a close to neutral, moderately accentuated and soft upper midrange presentation and the transitions in this area are fiarly controlled. For example, instruments like violins and woodwinds or female voices do sound pretty lively, while the timbre and tonality is a bit unnatural.

The general treble presentation is fatigue free, which makes it ideal for longer listening periods. 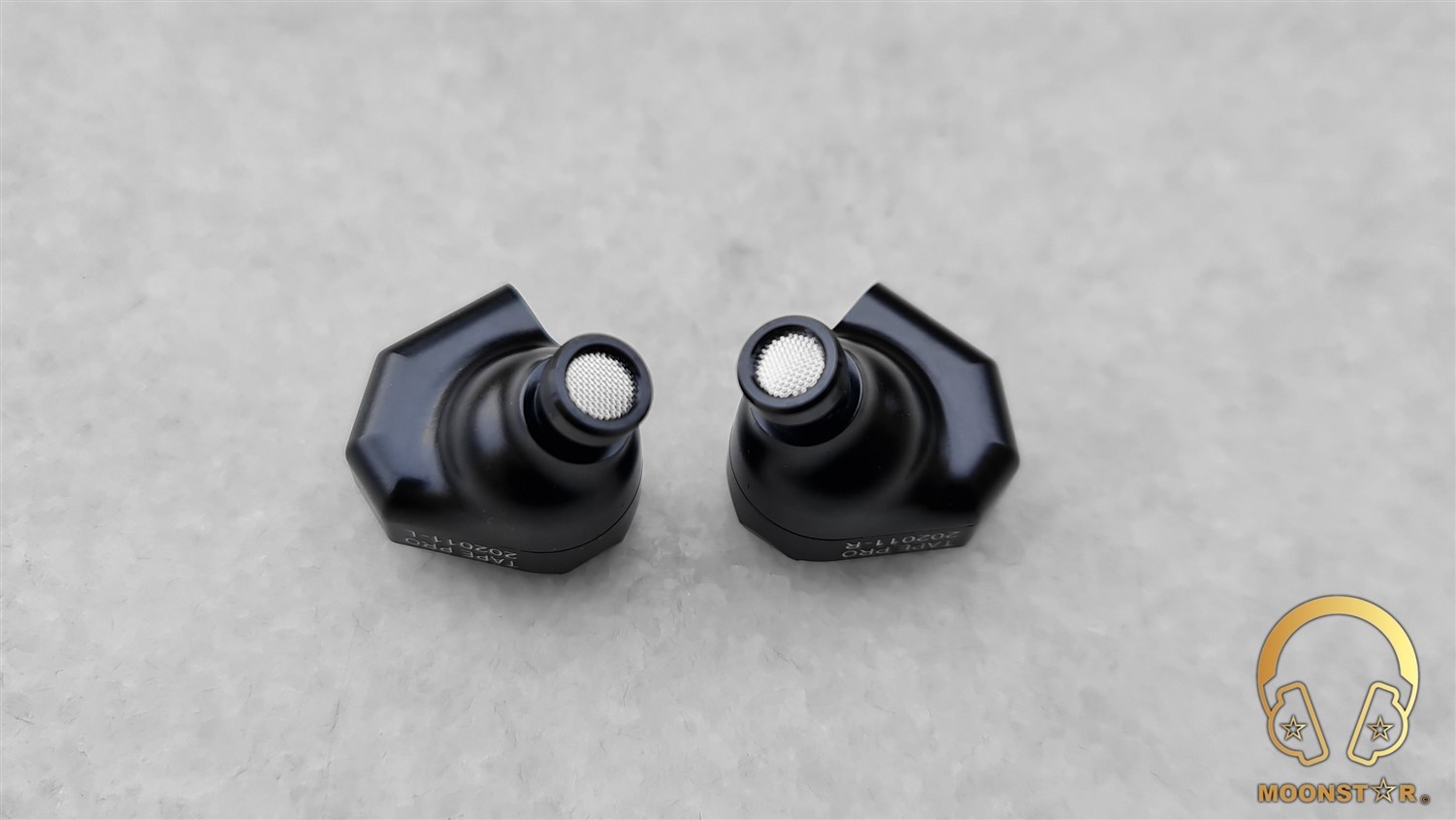 The soundstage of the Shuoer Tape Pro is suitable for a quite precise separation and placement of instruments and vocals. The stage is quite successful in terms of soundstage wideness, while the depth of the stage is on an average level.

The Ikko OH1 is an In-Ear Monitor with a fairly warm tonality, which shows a full bodied and entertaining presentation. The subass is deep and pronounced while the midbass is more balanced. The Midrange and treble presentation is smooth, forgiving and pretty musical.

The Ikko OH1 has the upper hand in terms of subbass depth, quantity and extension, while the Shuoer Tape Pro is more successful when it comes to the midbass detail retrieval and overall intensity. Both In-Ear Monitors do have a bass that is slightly loose and that shows a moderate level of speed and tightness. 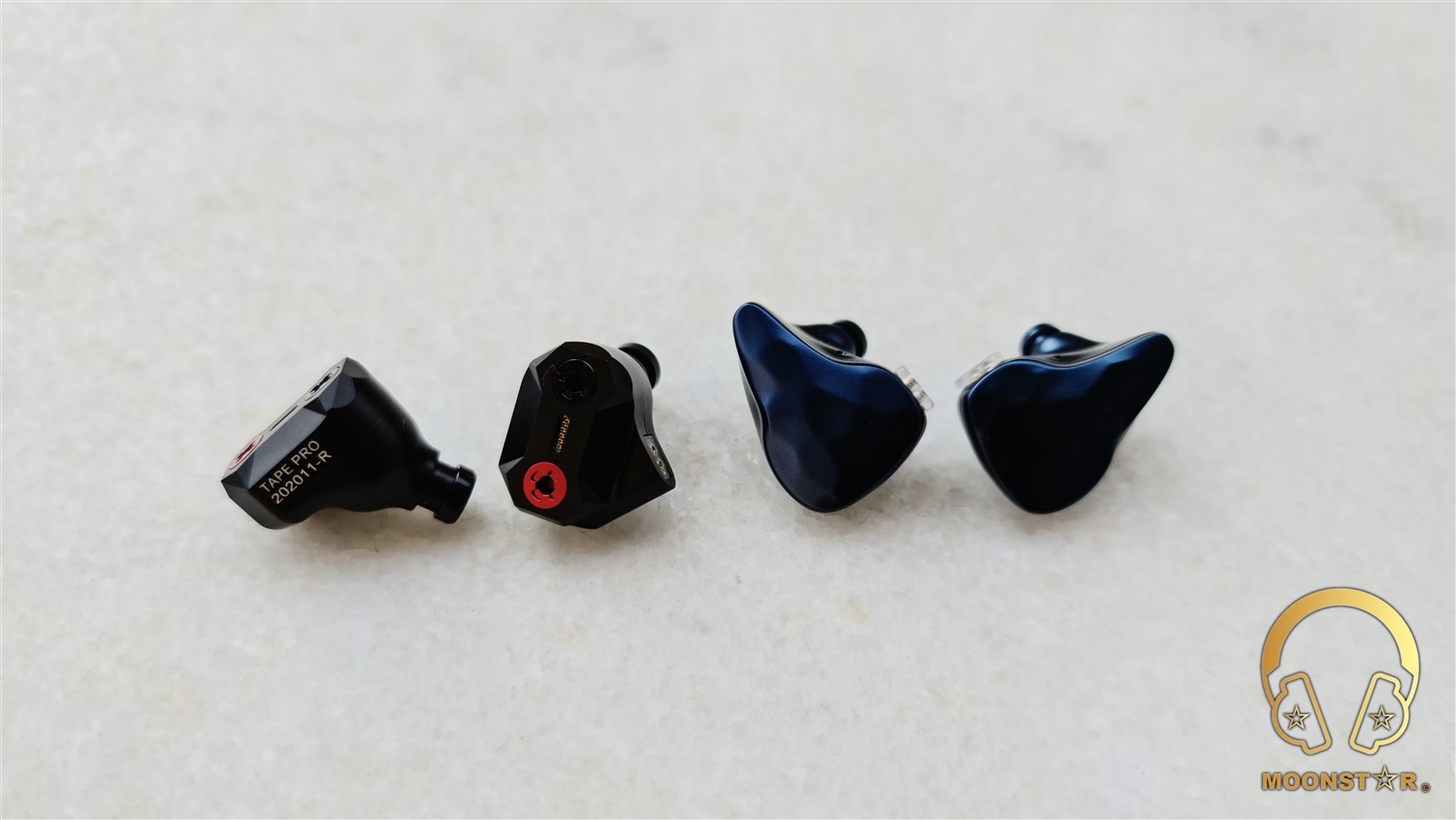 The soundstage of both IEM’s offers a sufficient performance in terms of separation & placement of instruments and vocals, the main difference is that the Shuoer Tape Pro has the upper hand for soundstage wideness. The Ikko OH1 on the other hand has a slightly advantage when it comes to the depth.

The FiiO FH3 is full bodied and entertaining sounding In-Ear Monitor with a deep and strong subbass character and fairly balanced midbass tuning. The midrange is slightly recessed but offers a good amount of clarity and upper midrange extension, while the treble range sounds silky smooth, forgiving and quite musical.

Both IEM’s do have a V shaped or close o V shaped sound signature and do offer an entertaining sound character. The FiiO FH3 has the slightly edge in terms of subbass depth, extension and overall intensity, while the Shuoer Tape Pro has the upper hand when it comes to the midbass performance that shows a better level of depth, quantity and impact in this area. 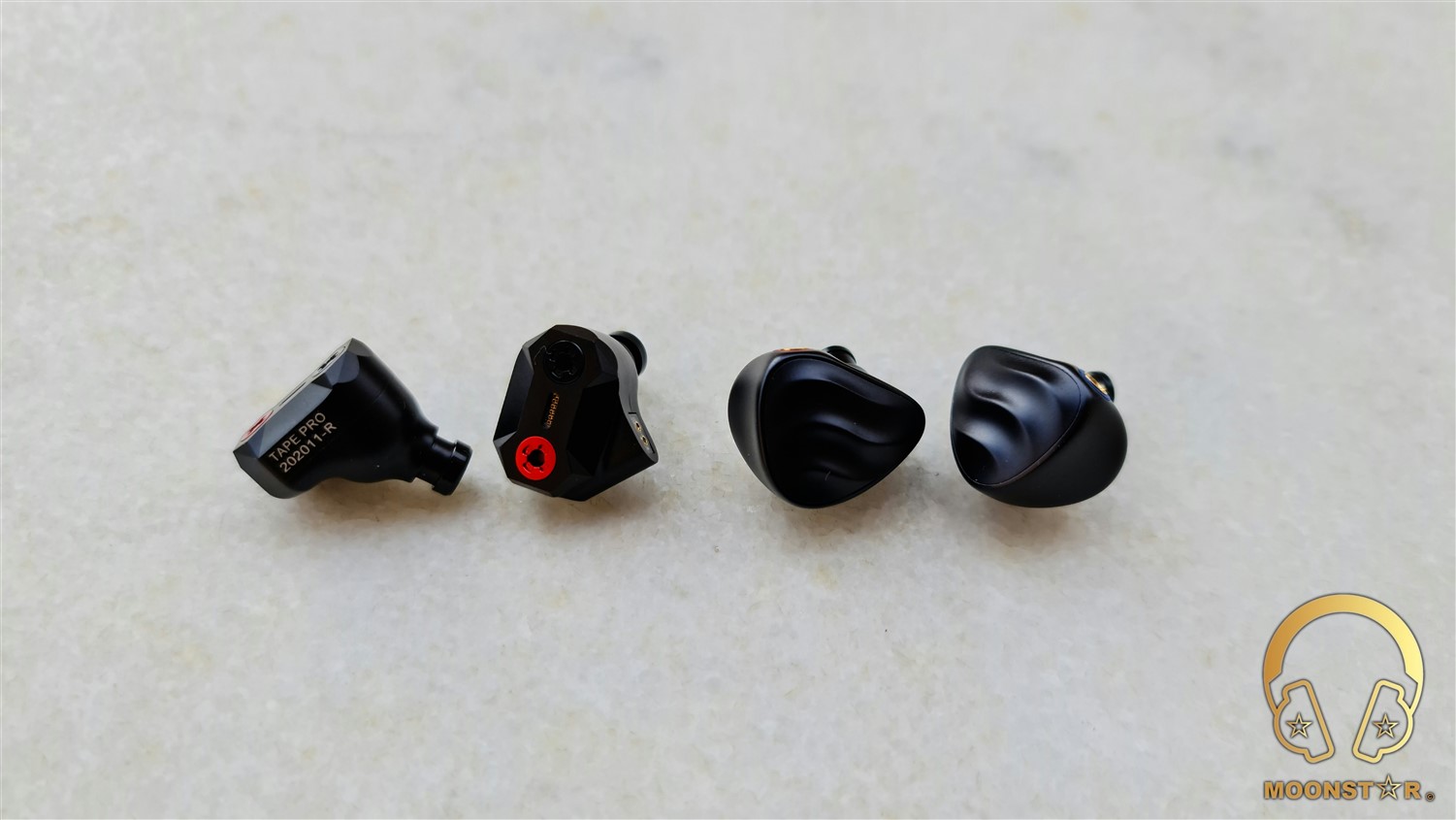 The midrange of both the Tape Pro and the FH3 sounds slightly recessed due to the V shape sound signature. The midrange of the FiiO FH3 has a warmer tonality and offers also more body. When it comes to the transparency and airiness of the midrange, I can say that both do offer an average performance. The Tape Pro sound better with male vocals compared to the FH3, while the FH3 is more successful with female vocals due to its upper midrange tuning.

The upper midrange and treble regions of both IEM’s sounds controlled and fatigue-free, but the FH3 has the upper hand in terms of overall intensity and level of airiness. 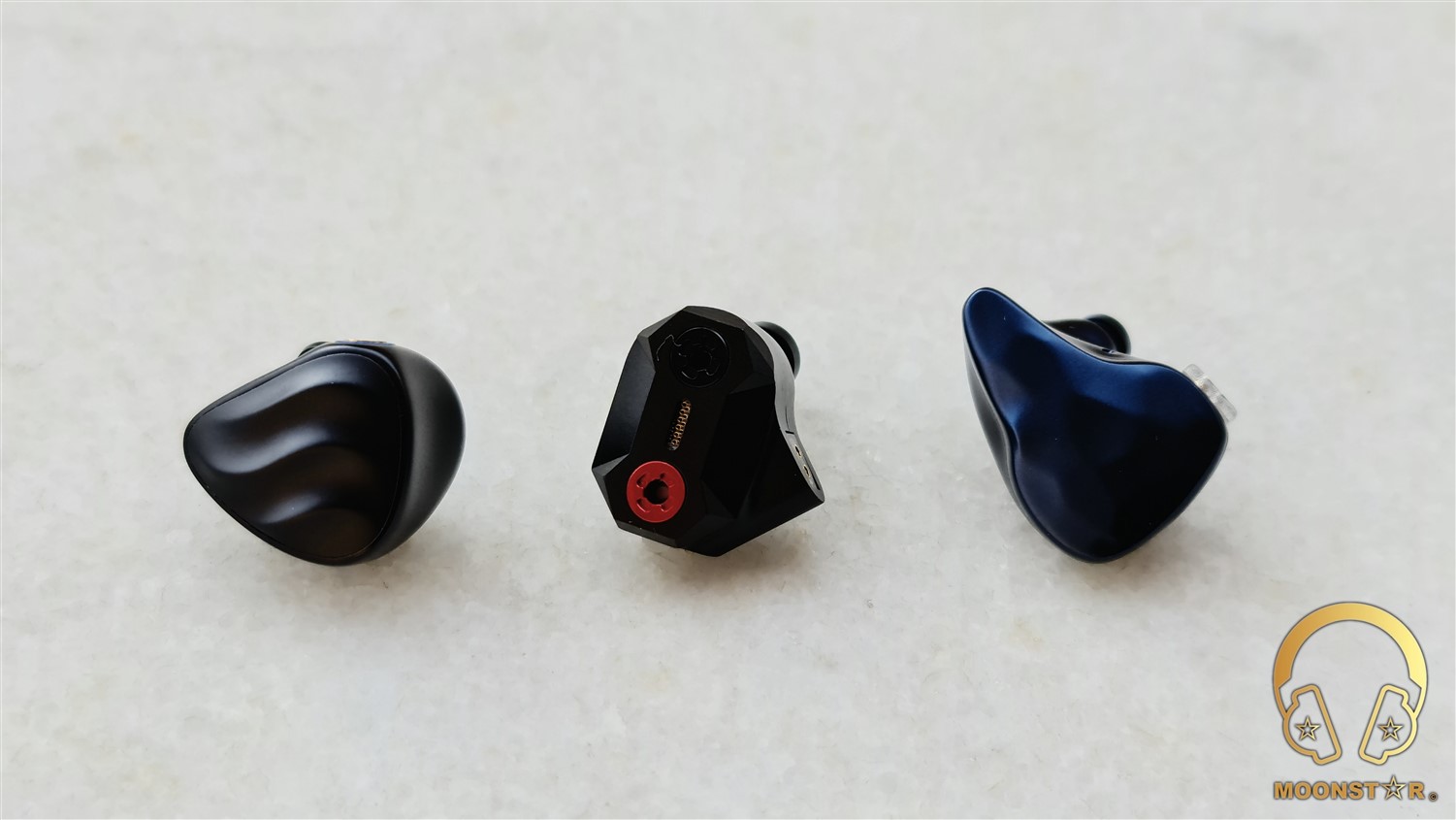 The Shuoer Tape Pro is an eye-catching In-Ear monitor with its unique cassette like design and very robust build quality. Under the hood is a MagnetoStatic Hybrid (MSH) Driver that is able to produce a pretty solid bass performance, while the midrange and treble regions are a bit too source sensitive and do need some improvements, especially in terms of tonality.