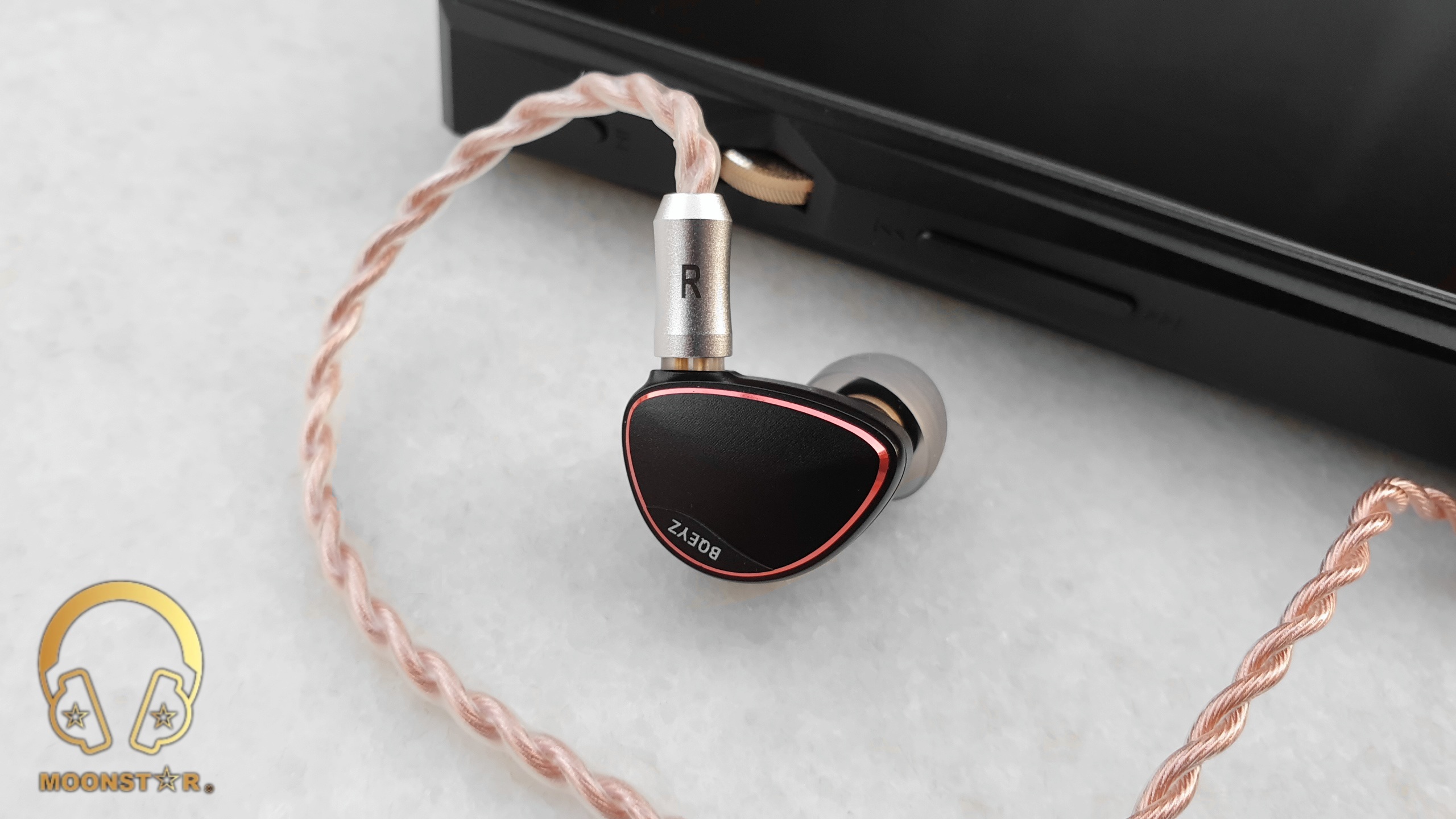 BQEYZ is a Chinese brand that is well known in the Chi-Fi scene with their affordable and pretty well tuned In-Ear Monitors.

The BQEYZ Spring 2 is the successor of the Spring1 and the new flagship IEM of the company that features also a “Triple Hybrid Driver” configuration with 1 BA + 1 Piezoelectric + 1 Dynamic Driver.

The dynamic driver has a diameter of 13mm and is responsible for the lows, while the 9-layer piezoelectric driver is producing the highs (upper and lower treble) and the balanced armature driver the midrange/upper midrange frequencies.

I would like to thank BQEYZ for providing me this sample for review purposes. I am not affiliated with BQEYZ beyond this review and these words reflect my true and unaltered opinions about the product.

The MSRP price for the BQEYZ Spring 2 is 169,00 USD and can be purchased from the links below;

The BQEYZ Spring 2 came in a small box in black color with a nice textured surface that features the BQEYZ brand logo in silver color. This box is wrapped with cardboard in blue color that has the Spring 2 branding with a big “2” on the top. 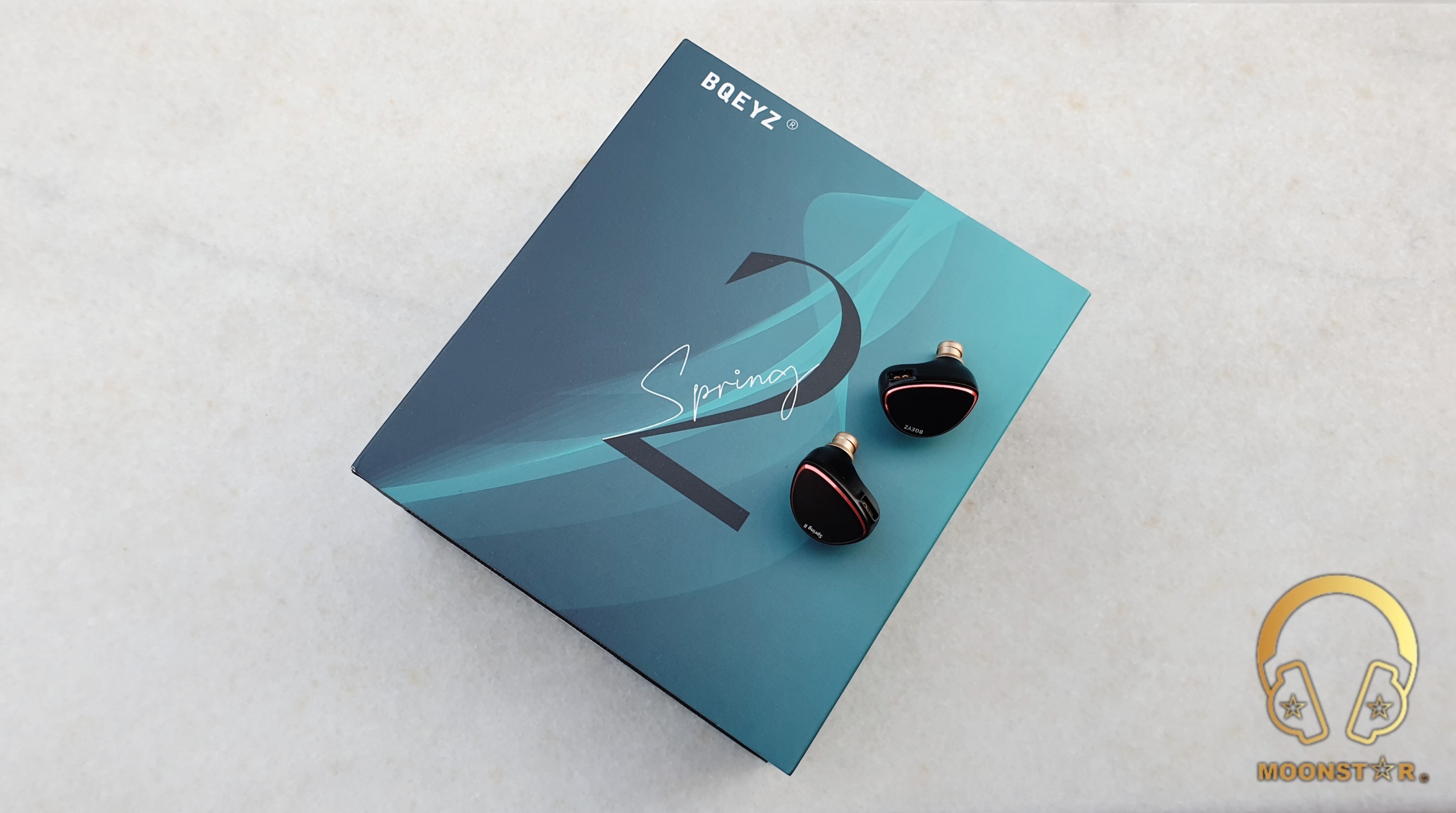 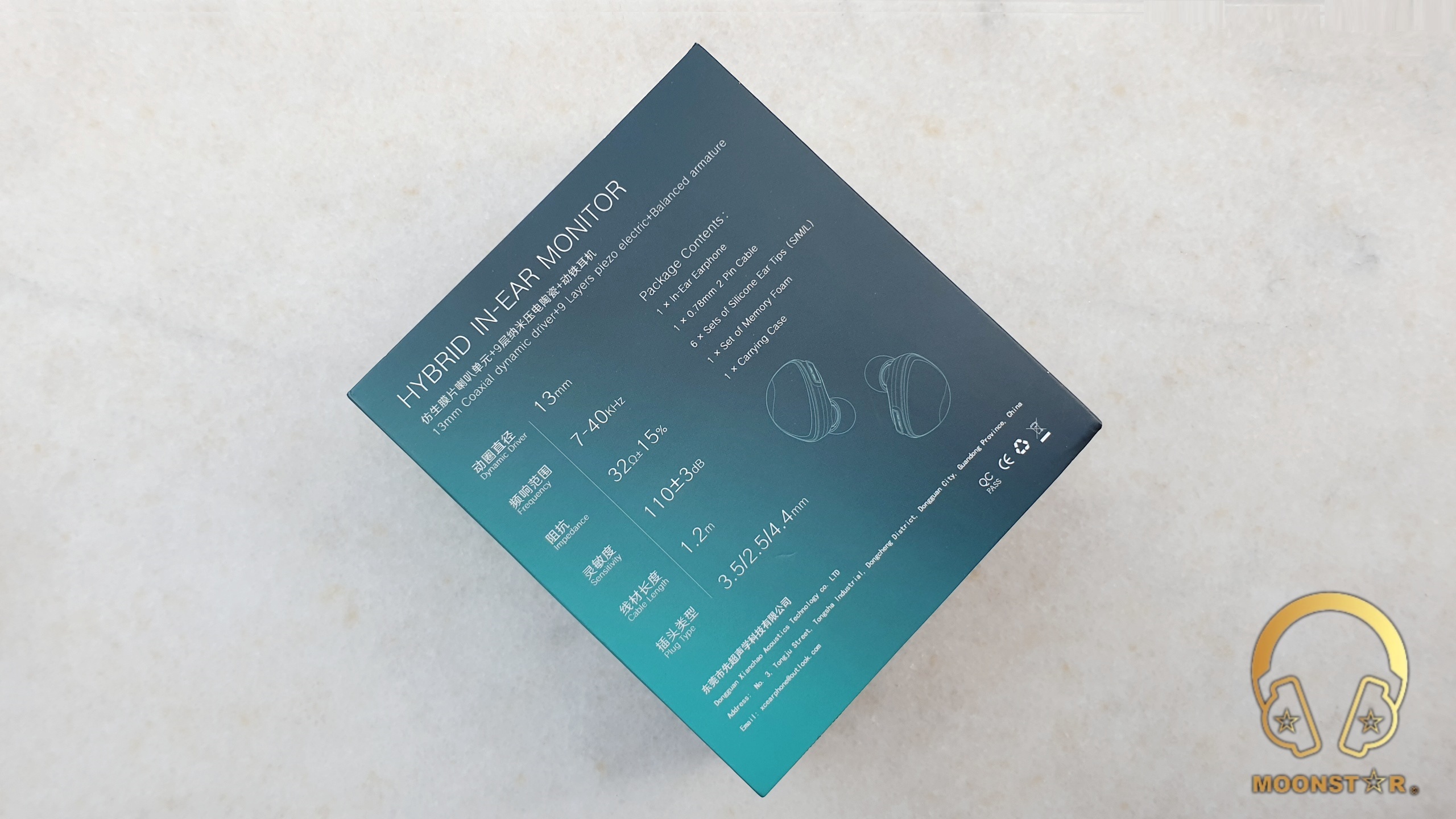 The BQEYZ Spring 2 came with 1 pair of foam tips and a metal ear tips organizer where the 6 pairs of silicone ear tips are stored. The metal organizer shows the size and description of each ear tips variant. 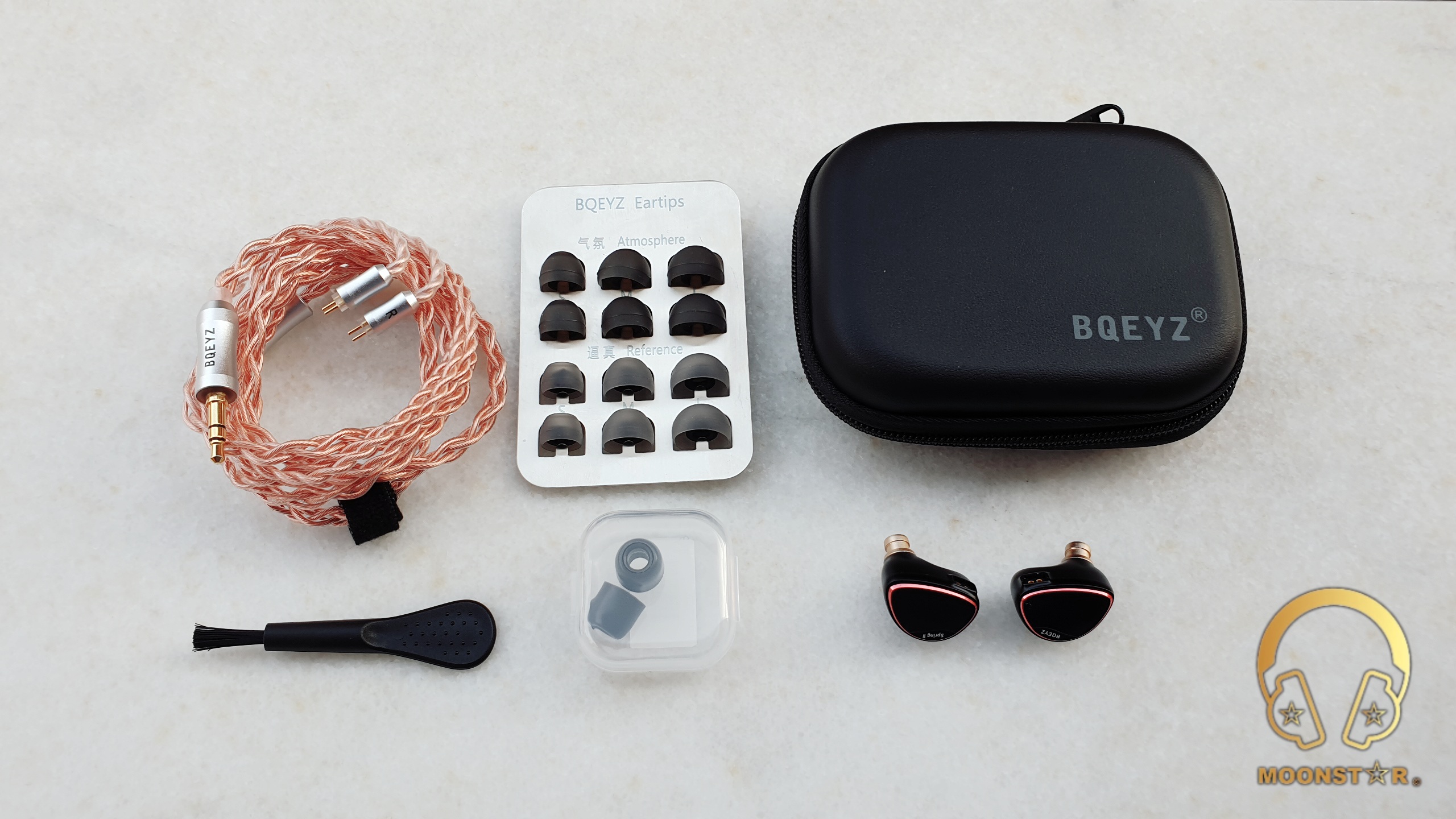 The cleaning BQEYZ Spring 2 comes also with a cleaning tool/brush which is a nice addition.

The zipper case is made of PU leather and is in black color with BQEYZ brand logo on the top. 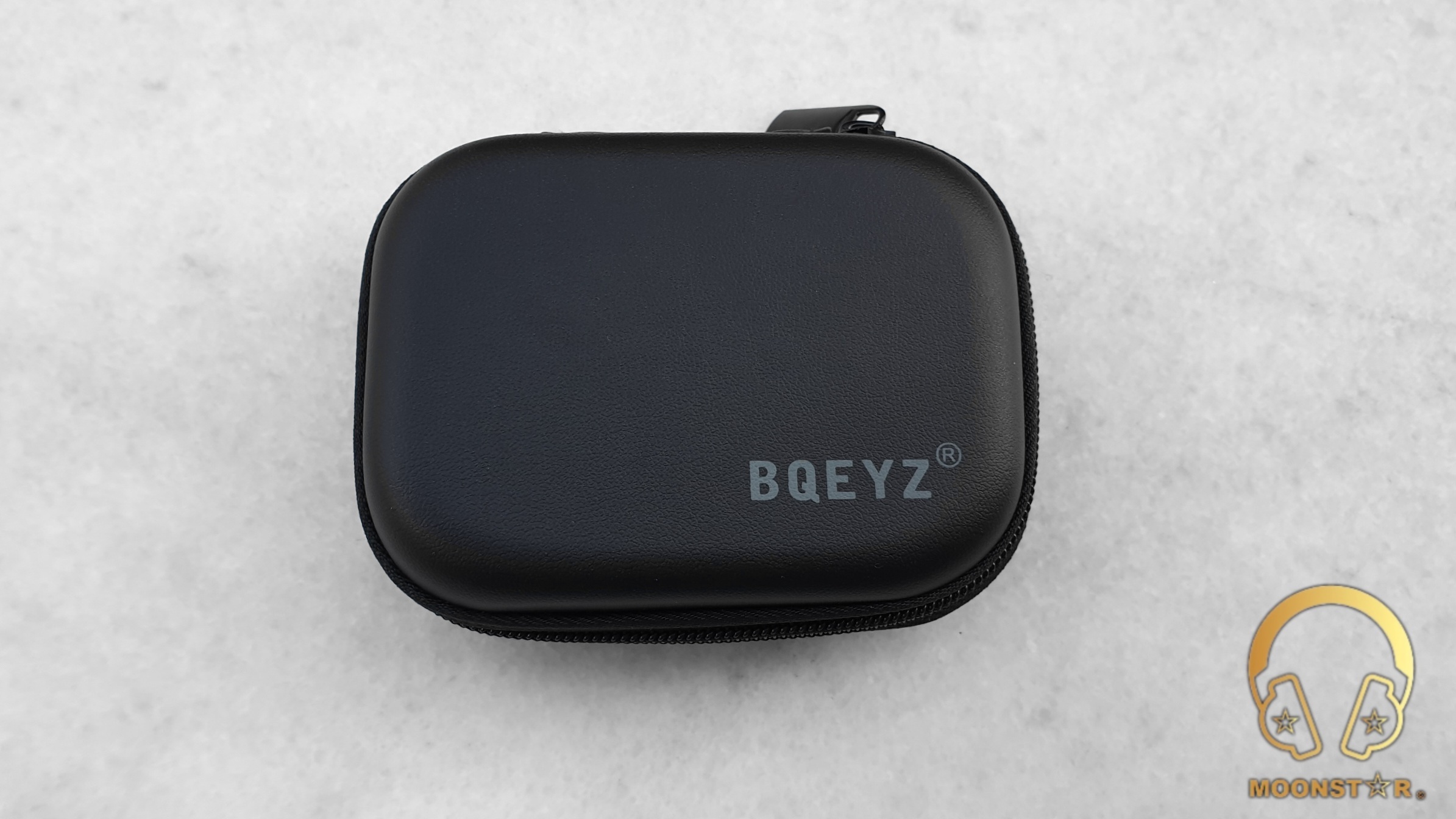 The monitor shell of the BQEYZ Spring 2 is nearly identical to its predecessor in terms of shape and design. The shell is made of Two-step anodized 5-Axis CNC engraved aluminum material that is available in Olive Green & Midnight Black colors like my review unit.

The overall build quality of the monitors is very solid without to show any imperfections like burrs or gaps. 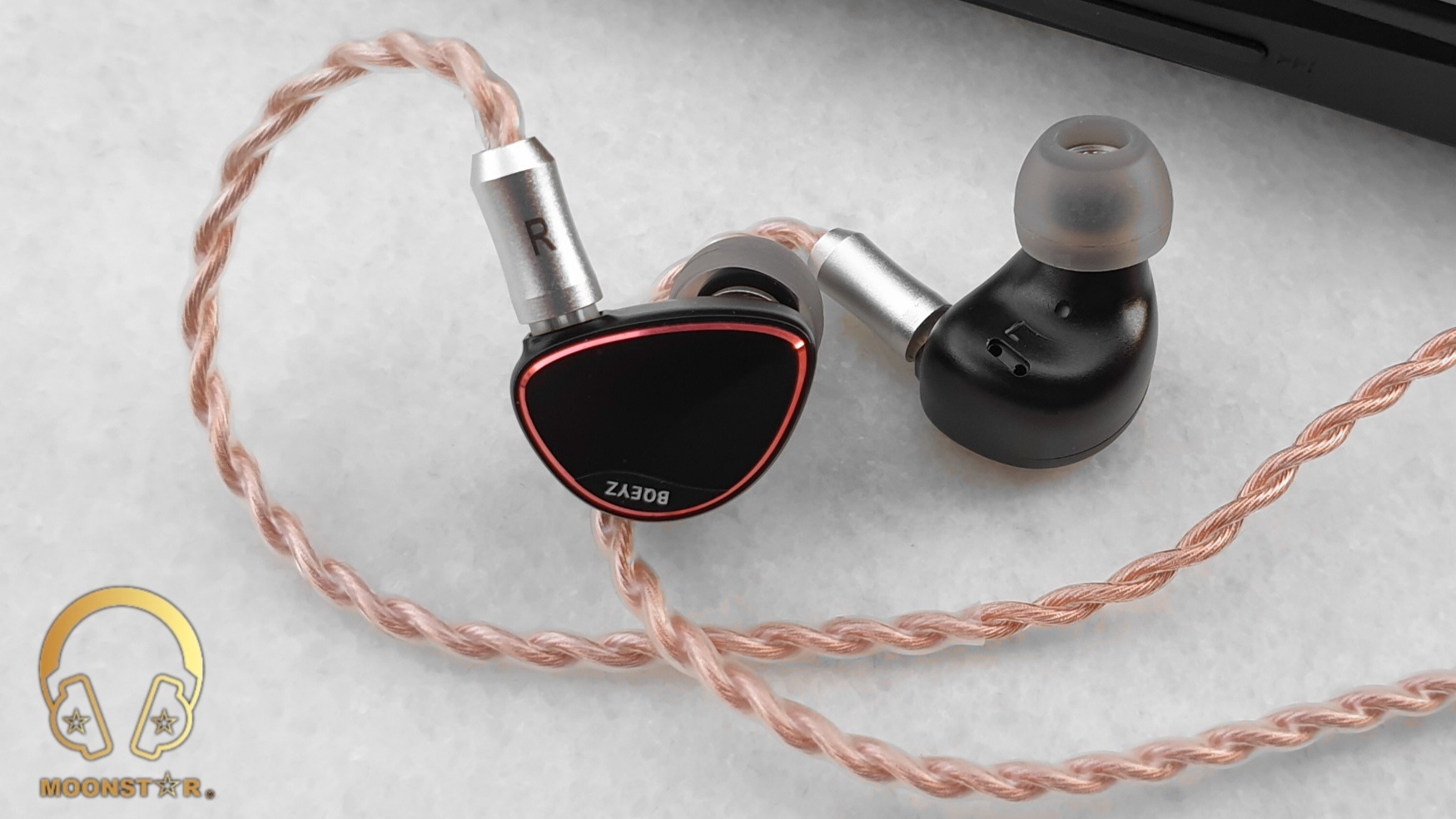 On the front of each monitor are product brandings, BQEYZ on the left earpiece and Spring 2 on the right earpiece. 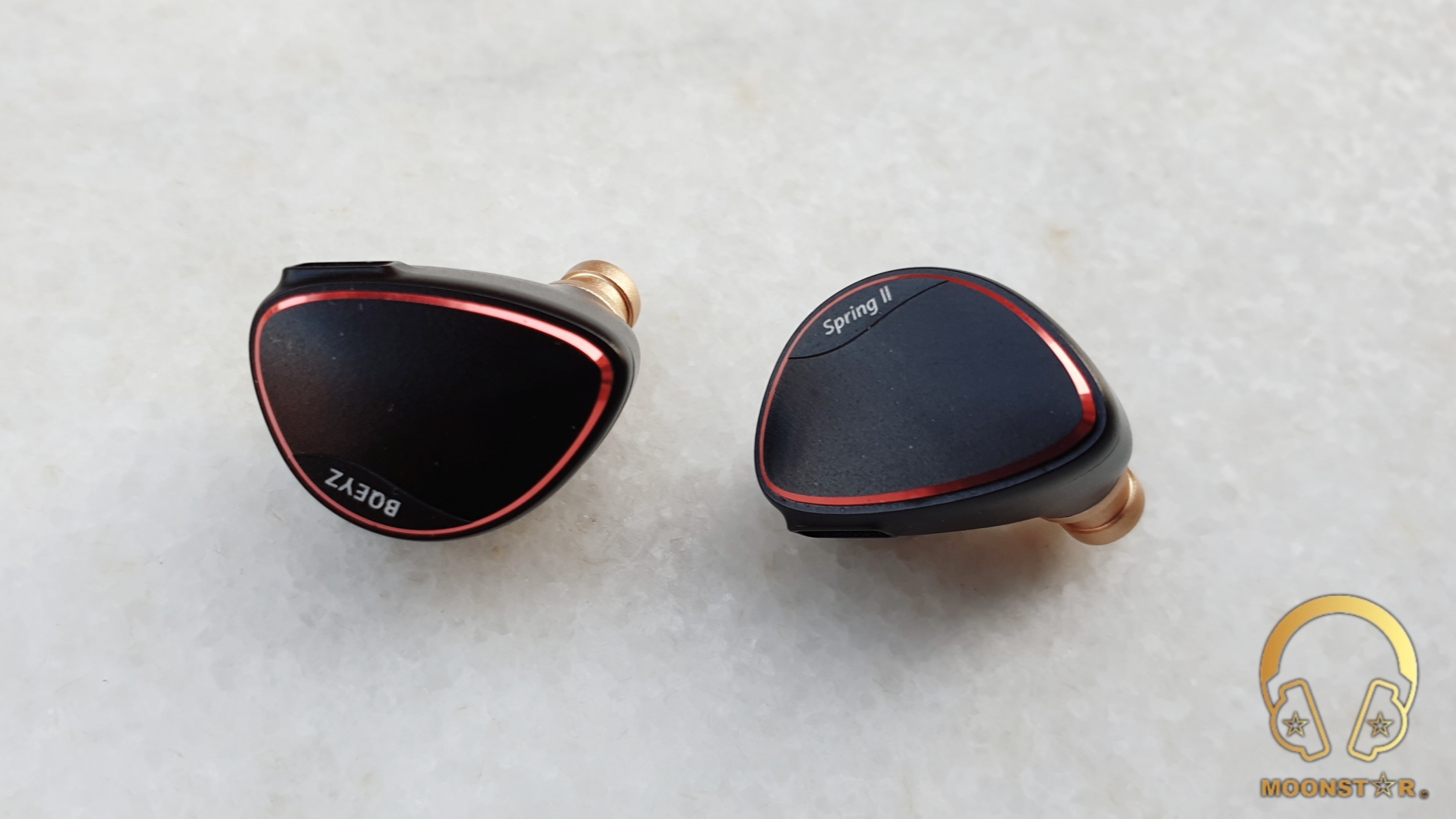 The edges of the faceplates have small cutouts with red anodized surfaces that do look very esthetical like the rest of the monitor shell. 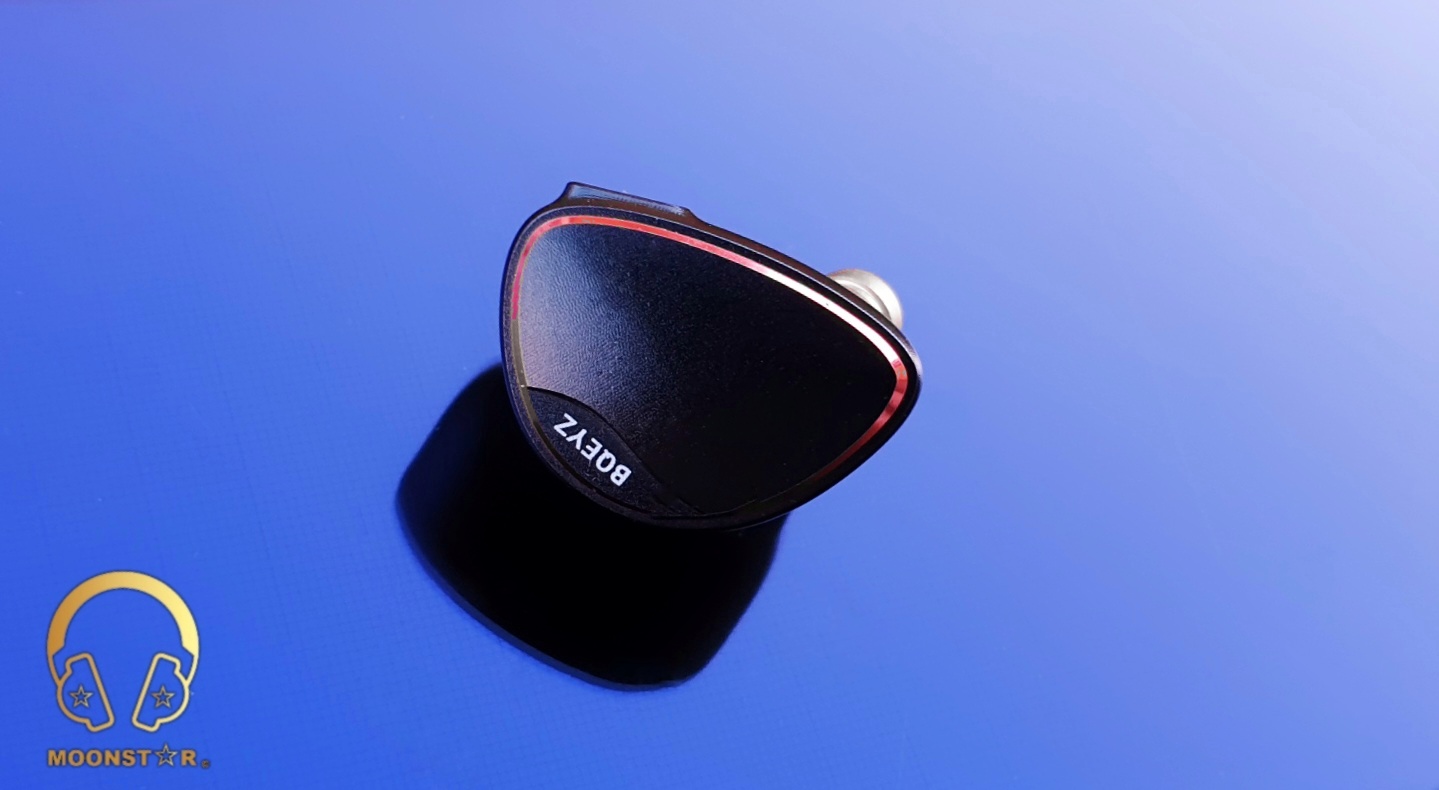 At the backside of the each monitor is a slightly angled metal sound nozzle in gold color, 3 bass vents (small holes) and the L (Left) & R (Right) markings.

The sound nozzle has a fine woven metal mesh on the top to prevent the insertion of ear-wax, dust, etc. 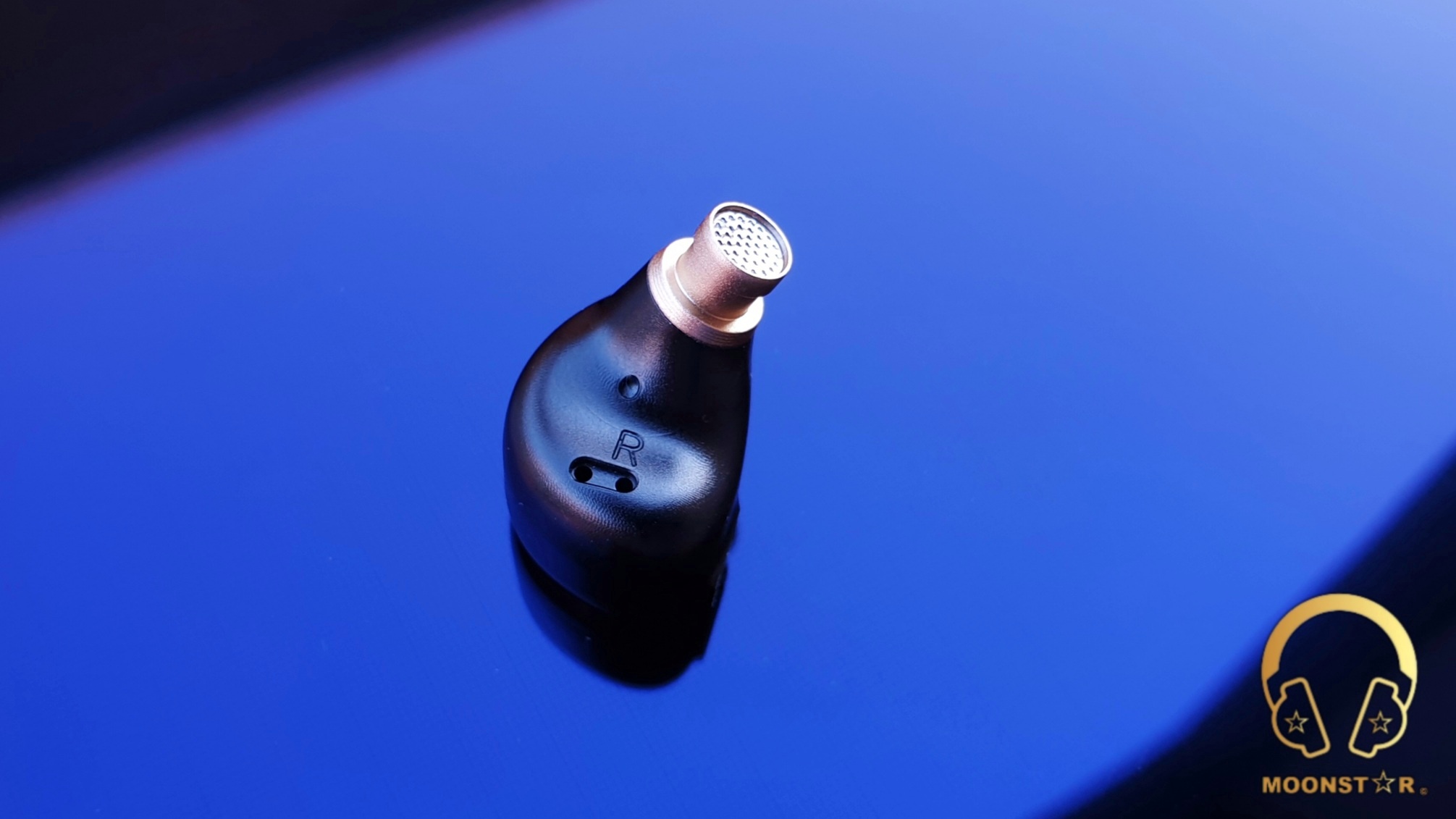 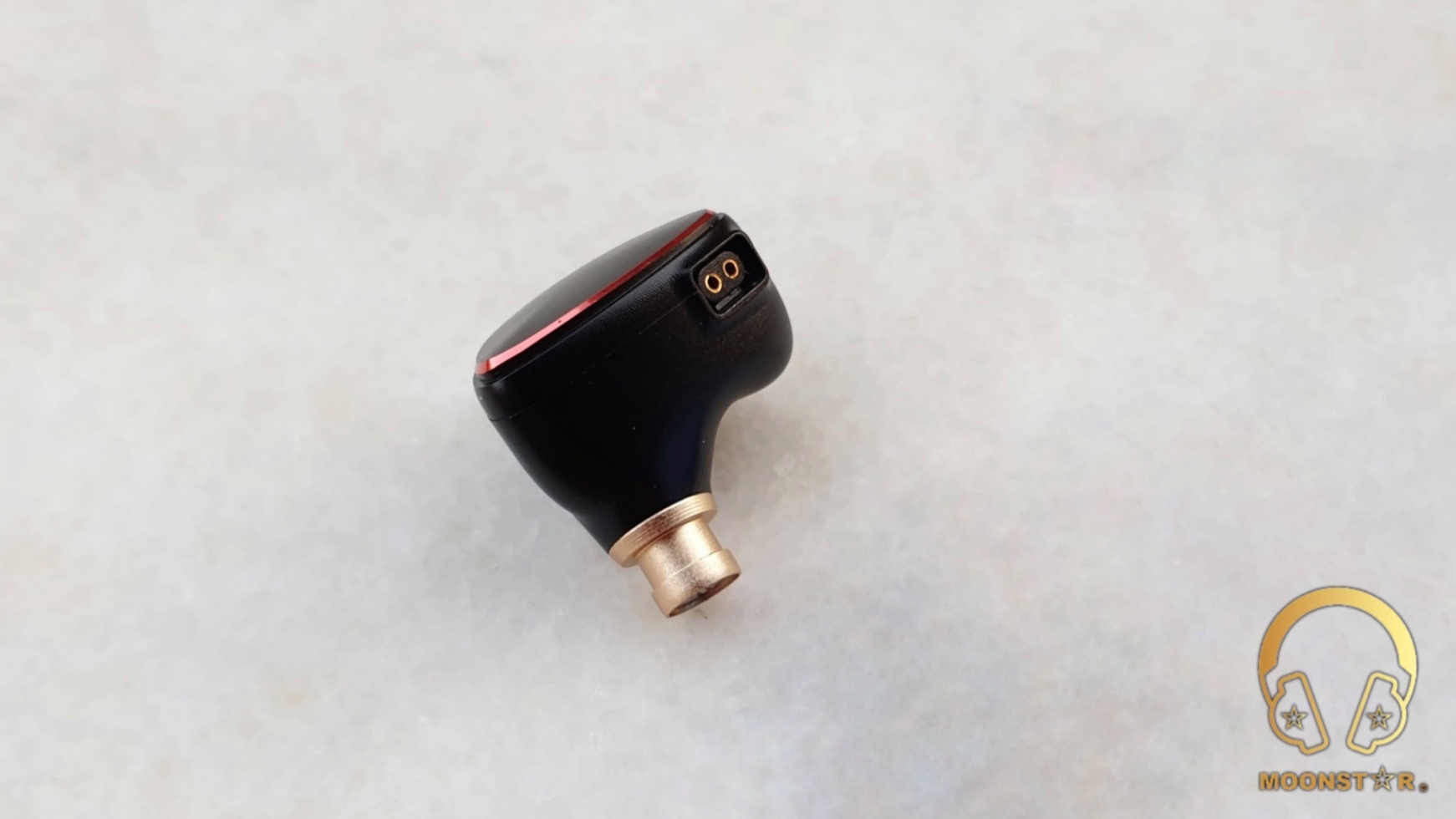 The shape and size of the Spring 2 monitors is pretty small and comfortable to wear, while the isolation is on an average level.

The BQEYZ Spring 2 comes with a detachable cable that is made of 4 cores of Singl Crystal Copper wire. The cable has a nice twisted design and features soft transparent TPU isolation with very low amount of microphonic effect. 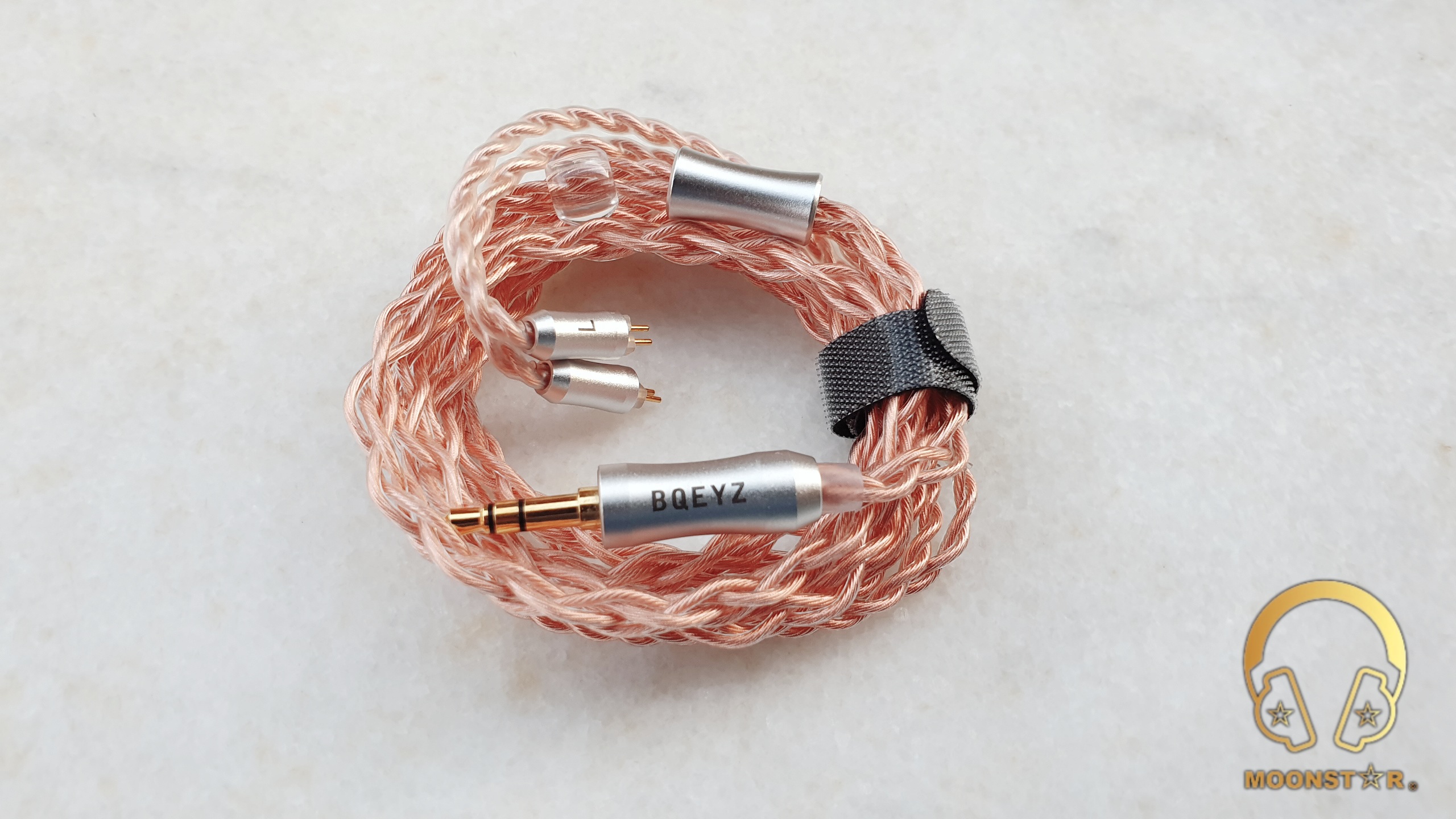 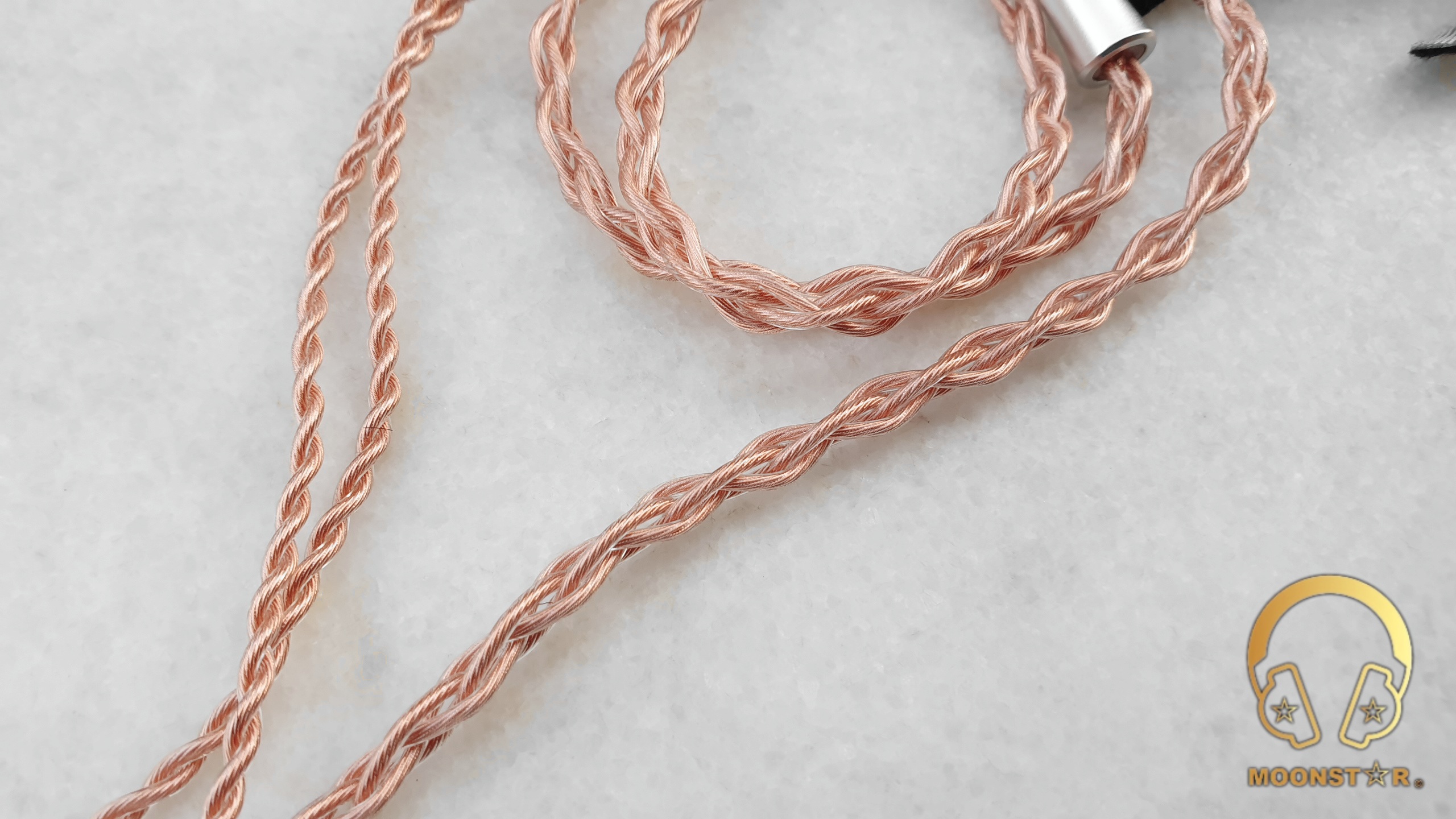 The cable has 0.78mmdiamter 2-Pin male connectors that do fit pretty tight to the female connectors located on the monitors. The connectors do have metal housings in sliver color and each connector has L (Left) & R (Right) markings. 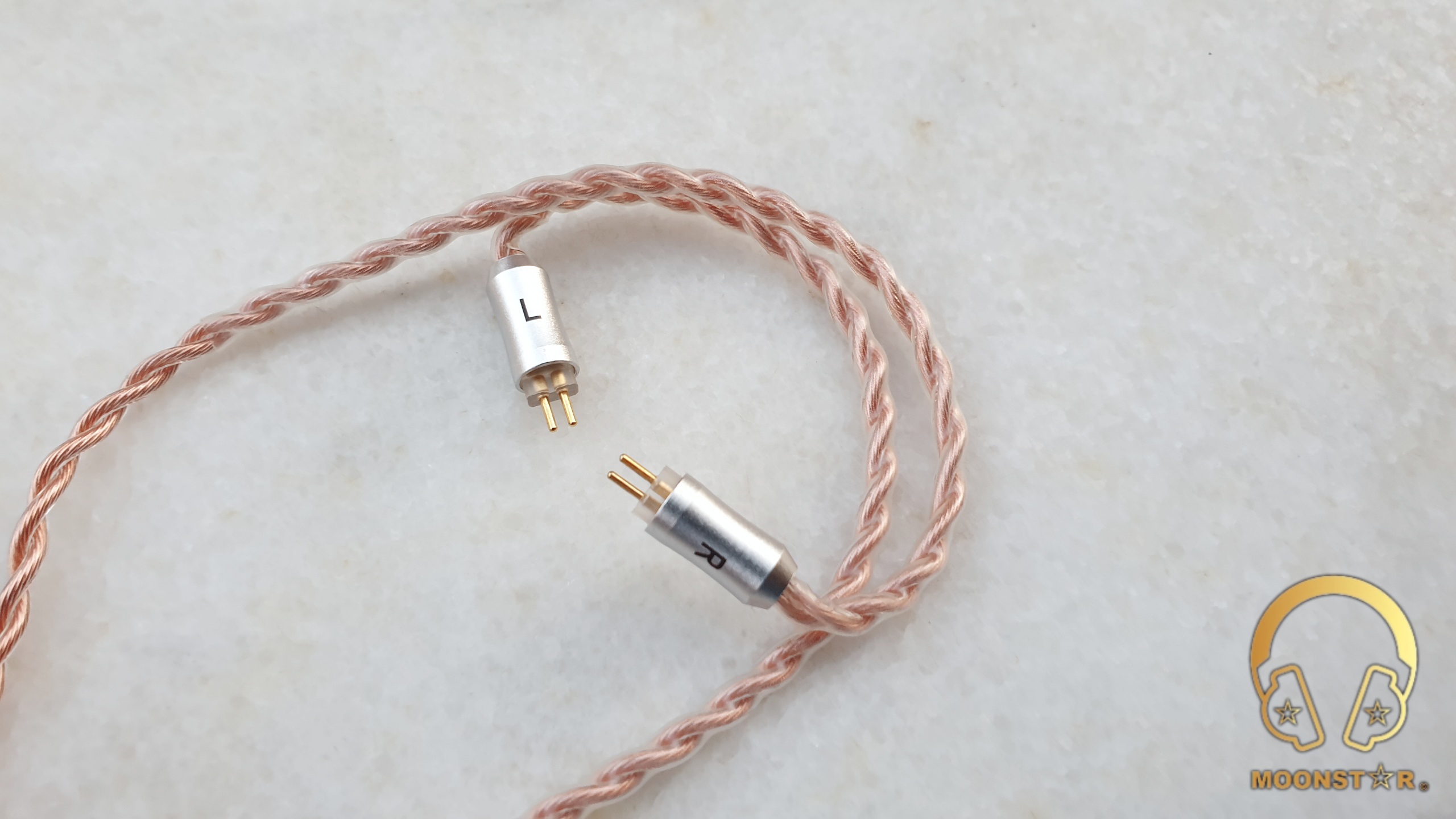 This cable features also a stylish metal y-splitter with BQEYZ branding and a chin slider in the silver color, same like the connector housings. 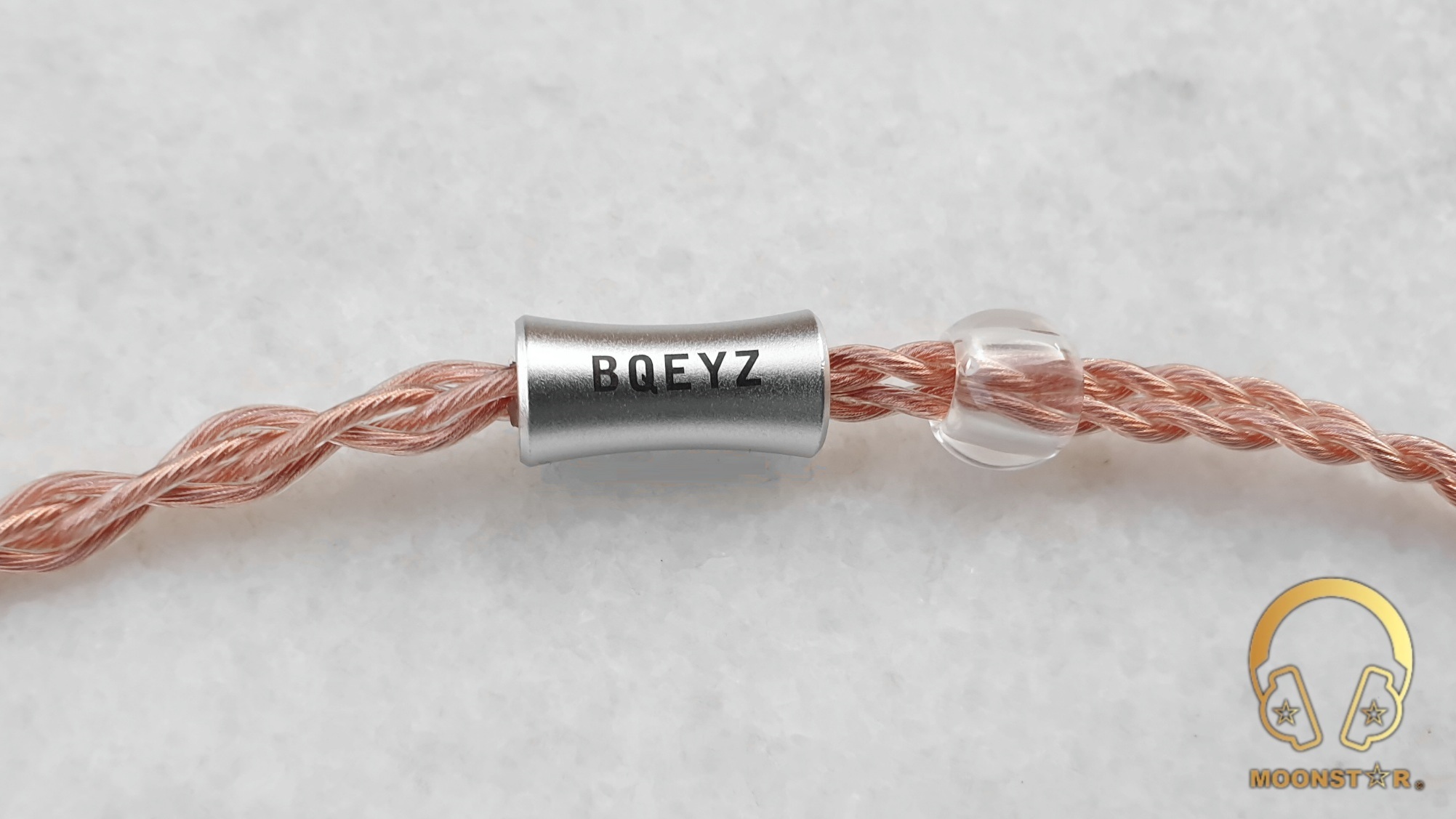 The cable of the BQEYZ Spring 2 can be ordered with 3 different headphone plugs which are 3.5mm (TRS), 2.5mm (TRRS) balanced and 4.4mm (TRRRS) balanced variants. My review unit came with the standard 3.5mm (TRS) pug and has a strait profiled headphone housing. The metal housing is also in silver color like the rest of the metal parts that we have seen on the cable and sports the BQEYZ brand logo. 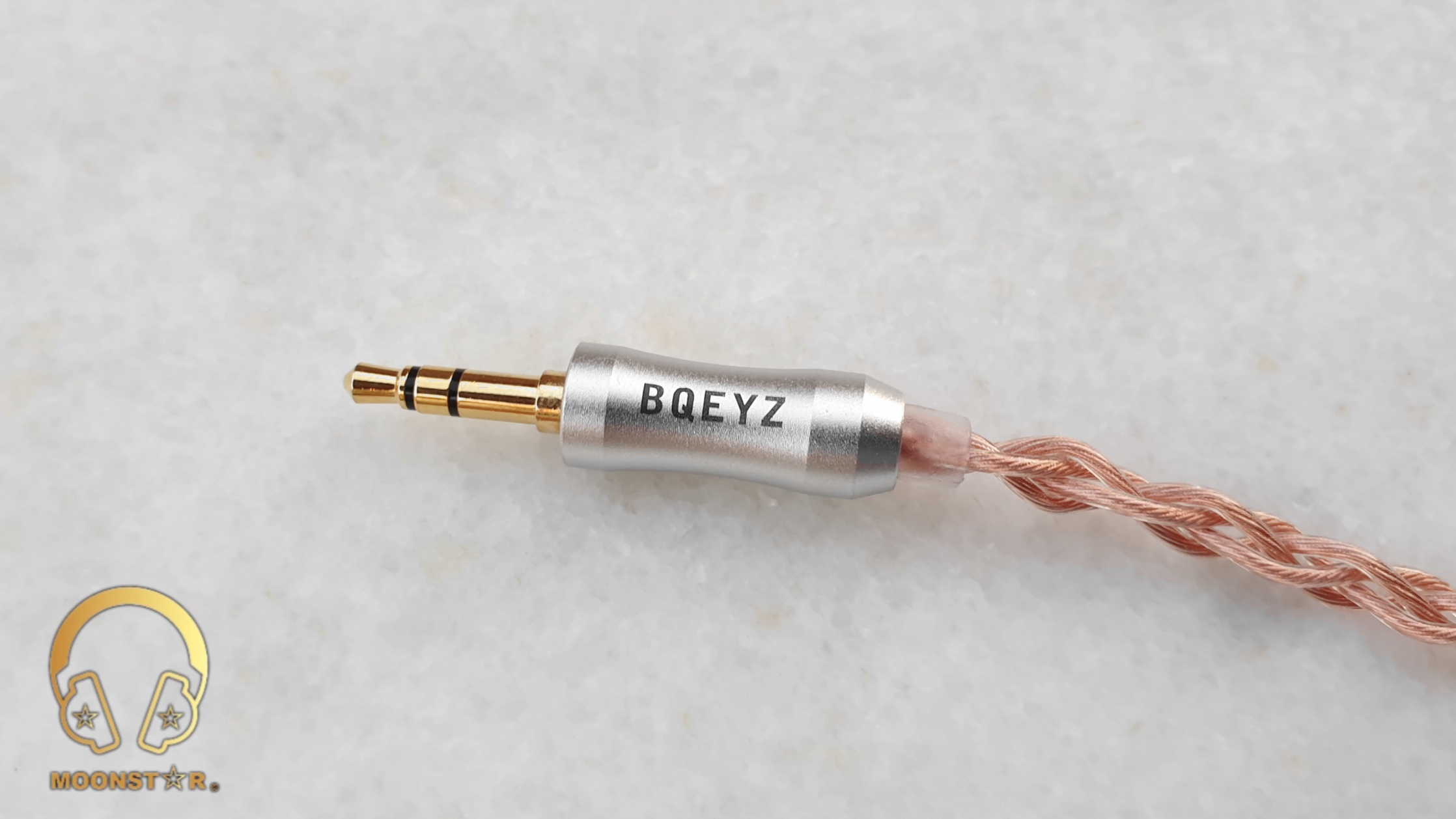 The BQEYZ Spring 2 has an impedance of 32ohm and sensitivity of approx. 110dB that makes it to an fairly easy to drive In-Ear Monitor for relative weak sources like smartphones, or tablets. But to hear the true potential, I would recommend you to use it with a small portable amplifier or Digital Audio Player (DAP) which will have a better amplification. 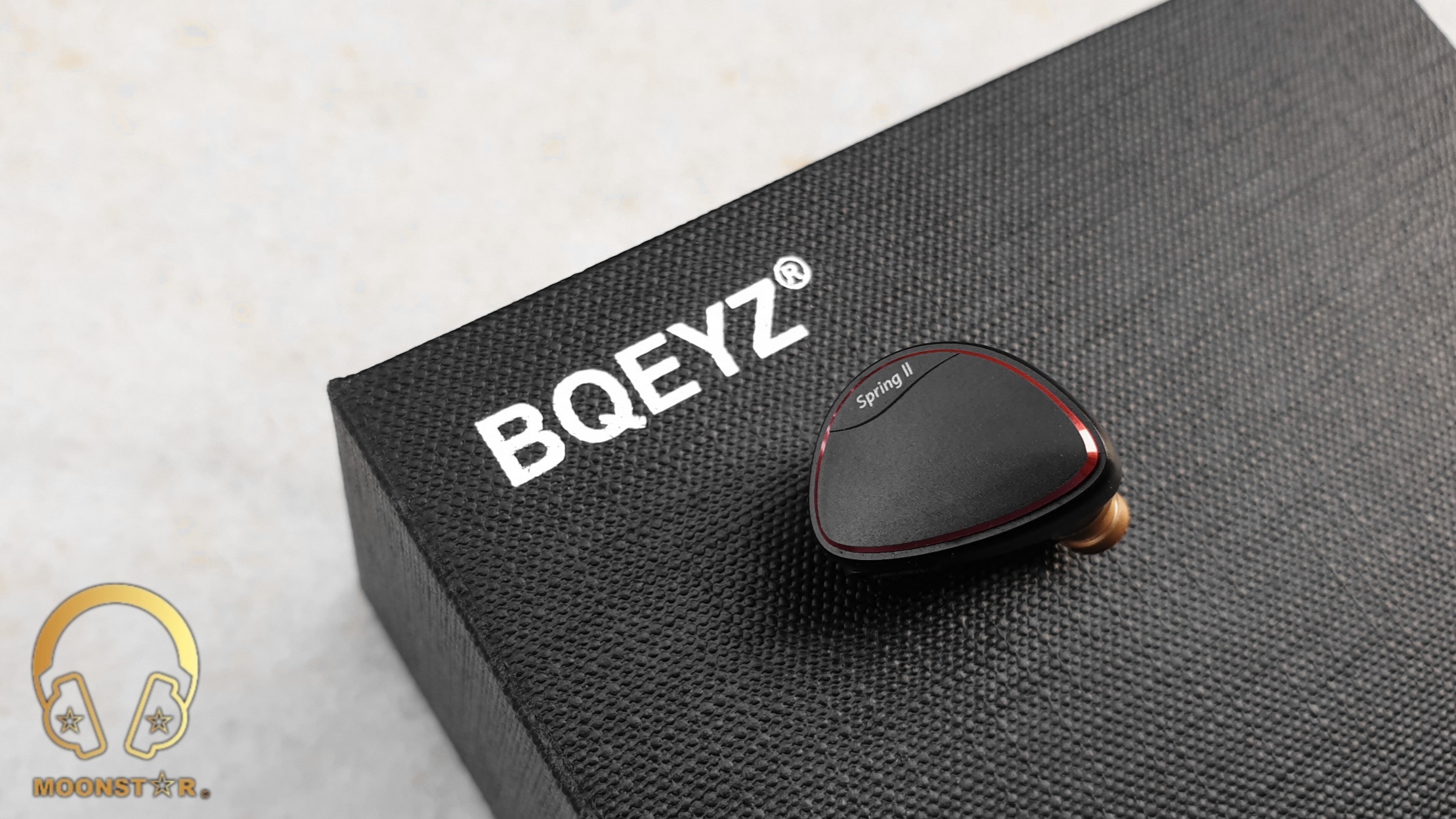 BQEYZ offers with the Sping 2 an In-Ear Monitor with a tad warmer than neutral tonality. The bass that is produced by the 13mm Dynamic Driver is deep and pretty fast, while the midrange is very transparent, soft and detailed. The treble range on the other hand is energetic, pretty detailed and also forgiving. 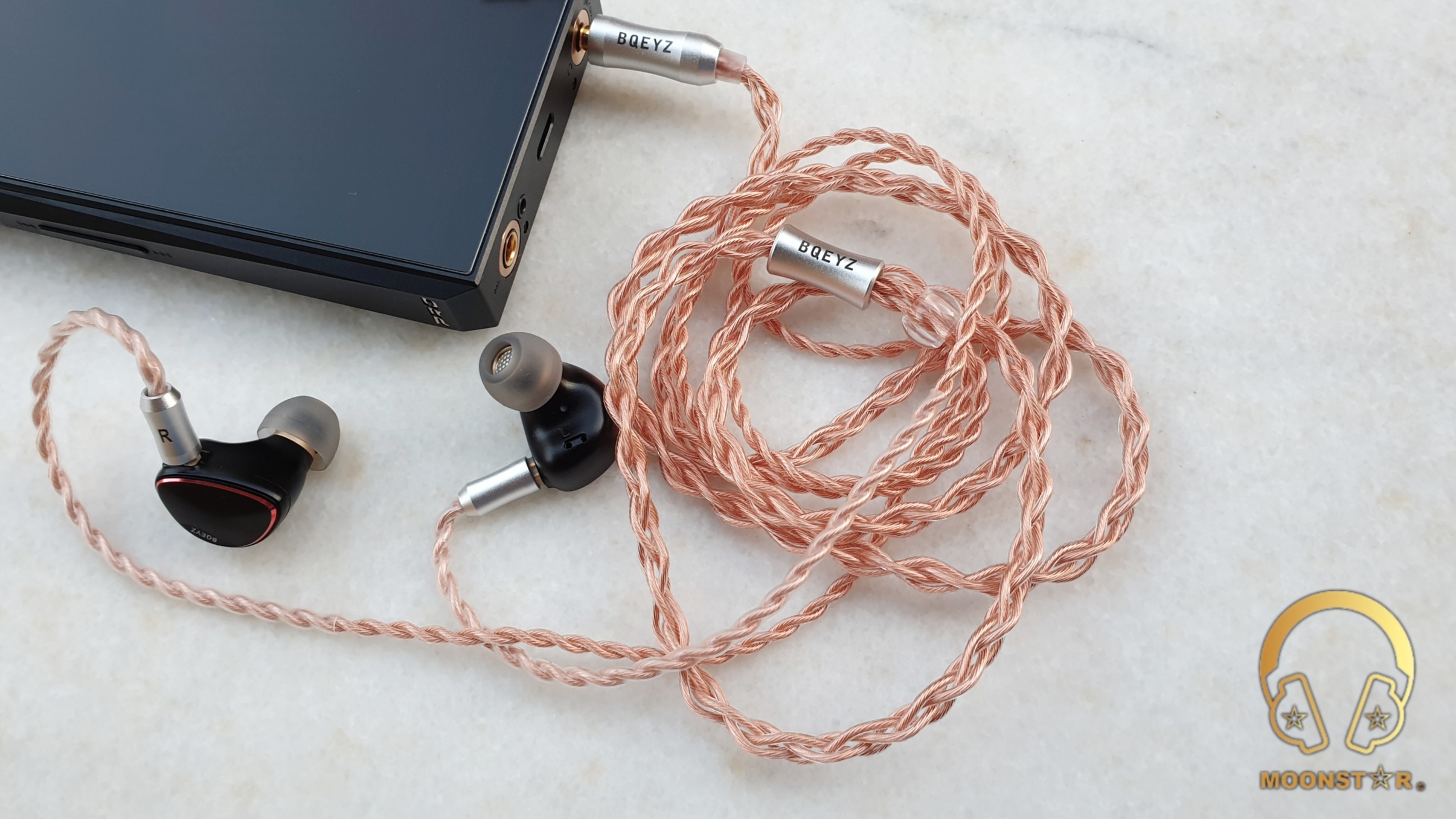 The subbass range of the BQEYZ Sping 2 has a warmish tonality and shows good depth and extension, while the intensity is on a moderate level. The subbass area shows less intensity and quantity compared to the midbass region, while the the speed, control and traceability of this area is pretty good for an IEM at this price level and can easily compete with IEM’s up to the 300 USD.

The midbass region of the Spring 2 shows a warm tonality and is more pronounced compared to the subbass region same like with the Sping 1. Instruments like acoustic guitars and drums do sound full bodied and are shown with a pretty fast bass response. The midbass shows a good amount of impact and offers also a good level of slam effect that will be satisfy most listeners with exception of true bassheads.

The fast response of the bass is a remarkable plus point of the Sping 2 especially for quite large 13mm dynamic driver. 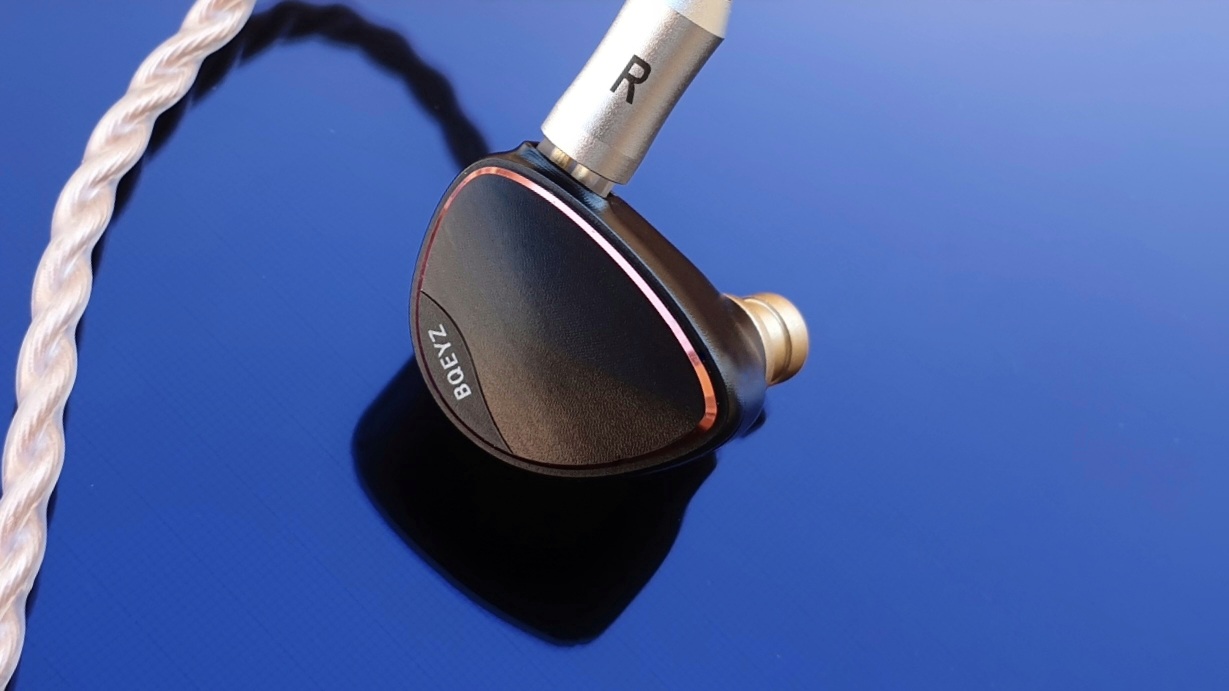 The BQEYZ Spring 2 has a warmish midrange tonality and shows in general a pretty transparent/clear and detailed presentation in this area. The midrange is also quite musical and has an above average level of fullness.

BQEYZ Sping 2 is an In-Ear Monitor that is successful with both male and female vocals.

Male vocals do sound full bodied and have a good level of depth thanks to the well-tuned lower midrange area. Male vocals like Barry White and Isaac Hayes do sound pretty musical, emotional and full bodied, while the level of transparency and clarity is very successful for an IEM at this price range without to shows any remarkable muddiness.

Female vocals on the other hand are quite detailed thanks to the well-tuned upper midrange character. Vocals like Aretha Franklin and Sertap Erener do sound intimate, emotional and detailed and do shown with a smooth and natural tonality. Male vocals are slightly more audible compared to female vocals that do sound slightly more recessed. I didn’t noticed any remarkable sibilance or harshness.

The BQEYZ Spring 2 has a slightly warmish, pretty musical and natural instrument tonality. The instruments are fairly full bodied. For example, acoustic guitars have a light bassy, sweet and warm tonality which makes them very enjoyable to listen to. Other instruments like pianos are slightly bright, while violins are soft and sweat in tonality without to show any remarkable harshness. I especially liked the BQEYZ Sping 2 while listen to acoustic recordings. 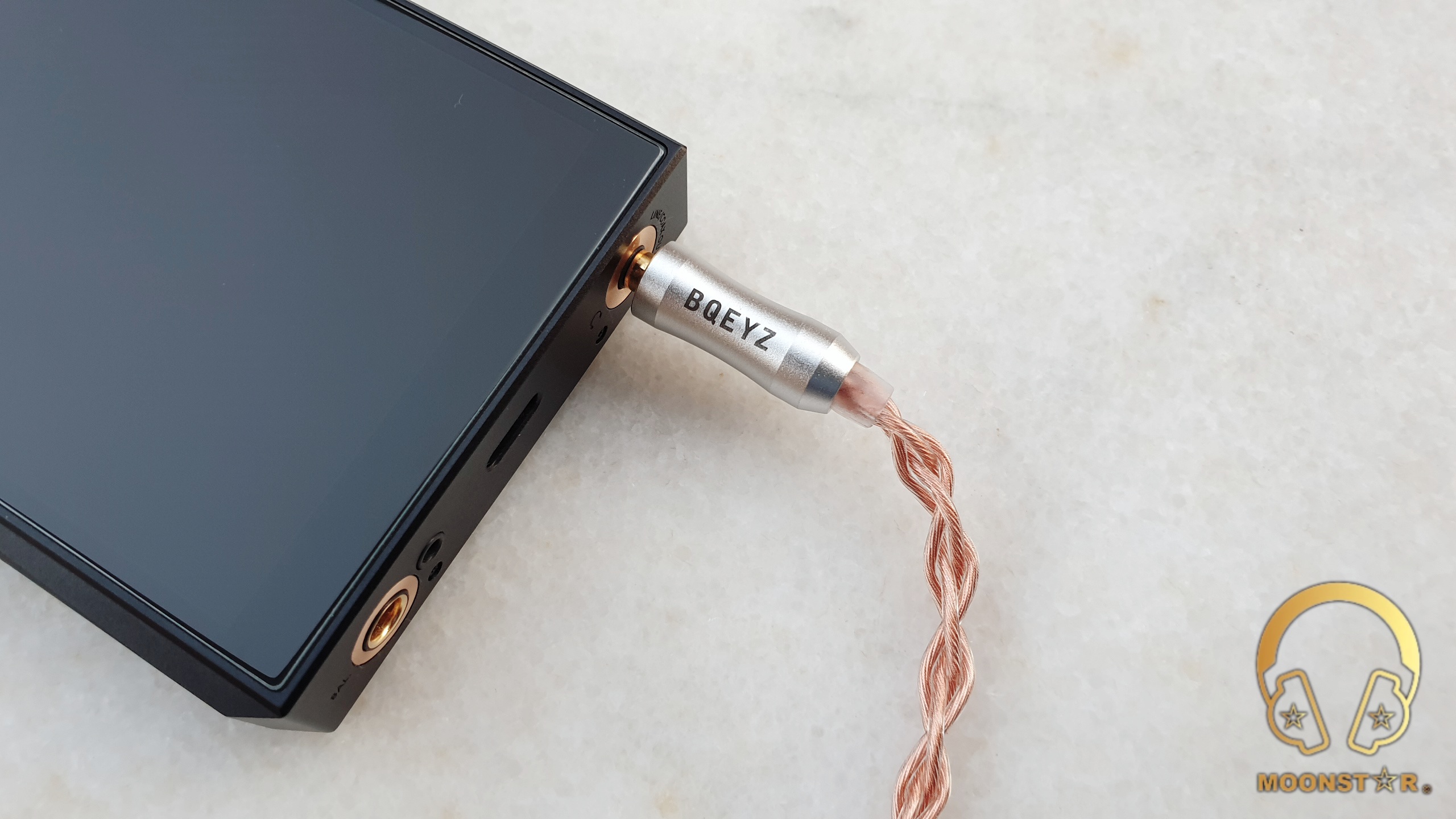 The BQEYZ Spring 2 has a moderate accent and pretty controlled upper midrange presentation with a warmish tonality. The upper midrange is fairly soft and fatigue free, which is the reason why the extension of female vocal and instruments such as violins and pianos is a bit short.

The BQEYZ Spring 2 has pretty pronounced treble presentation with a good level of intensity. The treble range has a bright tonality with a nice amount of sparkle. The lower treble range shows slightly less intensity compared to the upper treble region (brilliance), and therefore the Hi-hat’s in metal music do come slightly from the background. Other instruments like crash cymbal are more pronounced compared to hi-hats. The level of airiness in the treble range is pretty good.

Treble range sounds more neutral and transparent in tonality compared to the other frequencies and shows a very lively and energetic presentation. 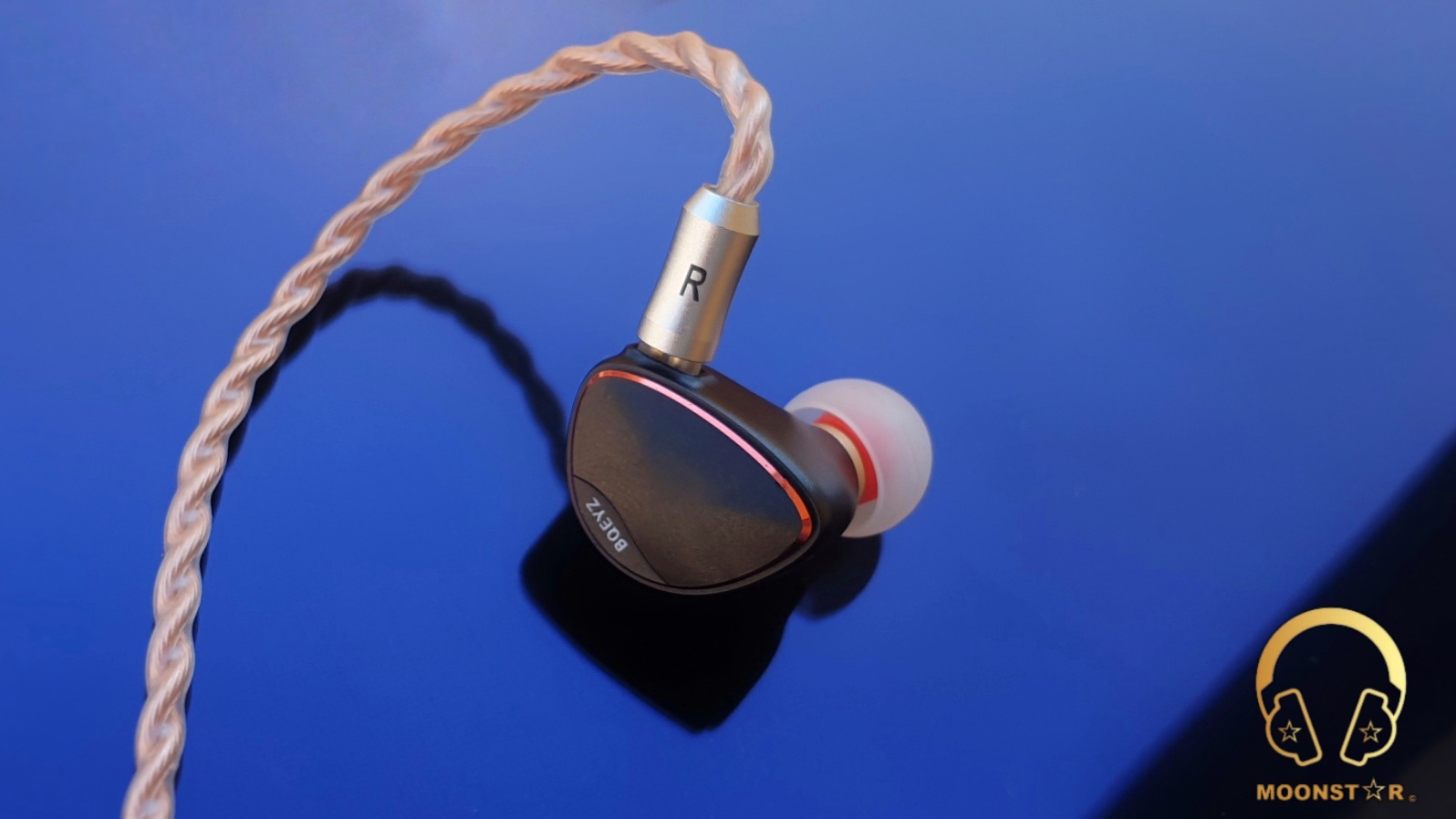 The Campfire Audio Comet has a warmer and softer tonality compared to the BQEYZ Spring 2, while both a successful in terms of musicality. Both the subbass and midbass regions of the Comet do have slightly more depth and intensity, while the Spring 2 has an advantage in terms of overall speed and control.

The midrange of the Campfire Audio Comet shows a warmer tonality, while the BQEYZ Spring 2 sounds more transparent and detailed in this area. Male vocals are more successful with the Comet, because of the higher lower midrange depth and fullness that comes from the lower midrange region. The BQEYZ Spring 2 on the other hand shows a better performance when it comes to he female vocal presentation that do sound more detailed and clear thanks to its upper midrange tuning. 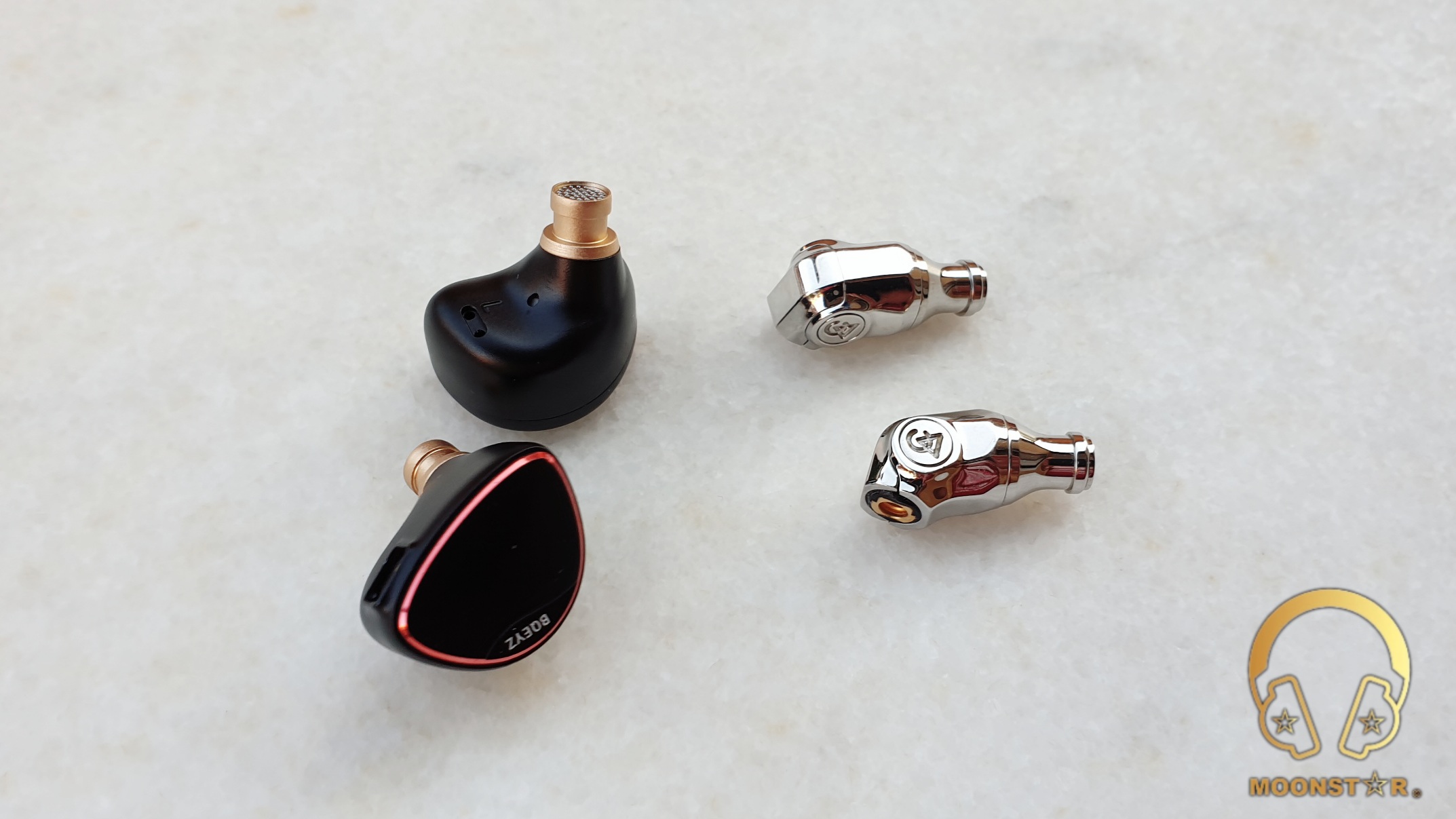 The upper midrange and treble region of the BQEYZ Spring 2 do have a brighter tonality with higher level of sparkle and airiness. The Spring 2 is also more successful in terms of extension and detail retrieval in this area. The Campfire Audio Comet sounds warmer and smoother in this area, which makes it more ideal for longer listening periods.

The soundstage of the BQEYZ Spring 2 sounds more expansive and airy compared to the Campfire Audio Comet. The Spring 2 offers a wider soundstage presentation, while the Comet shows slightly more depth.

The Ikko OH1 offers more subbass depth, intensity and rumble and has also the upper hand in terms of extension. The BQEYZ Spring 2 shows a moderate subbass quantity compared to the Spring 2 but is more successful when it comes to the tightness and speed. The midbass of the OH1 are more impactful and have also more intensity.

The midrange of the BQEYZ Spring 2 sounds slightly more neutral compared to the Ikko OH1 and shows more transparency and detailed. The OH1 offers a warmer and soft presentation that is a bit more musical. 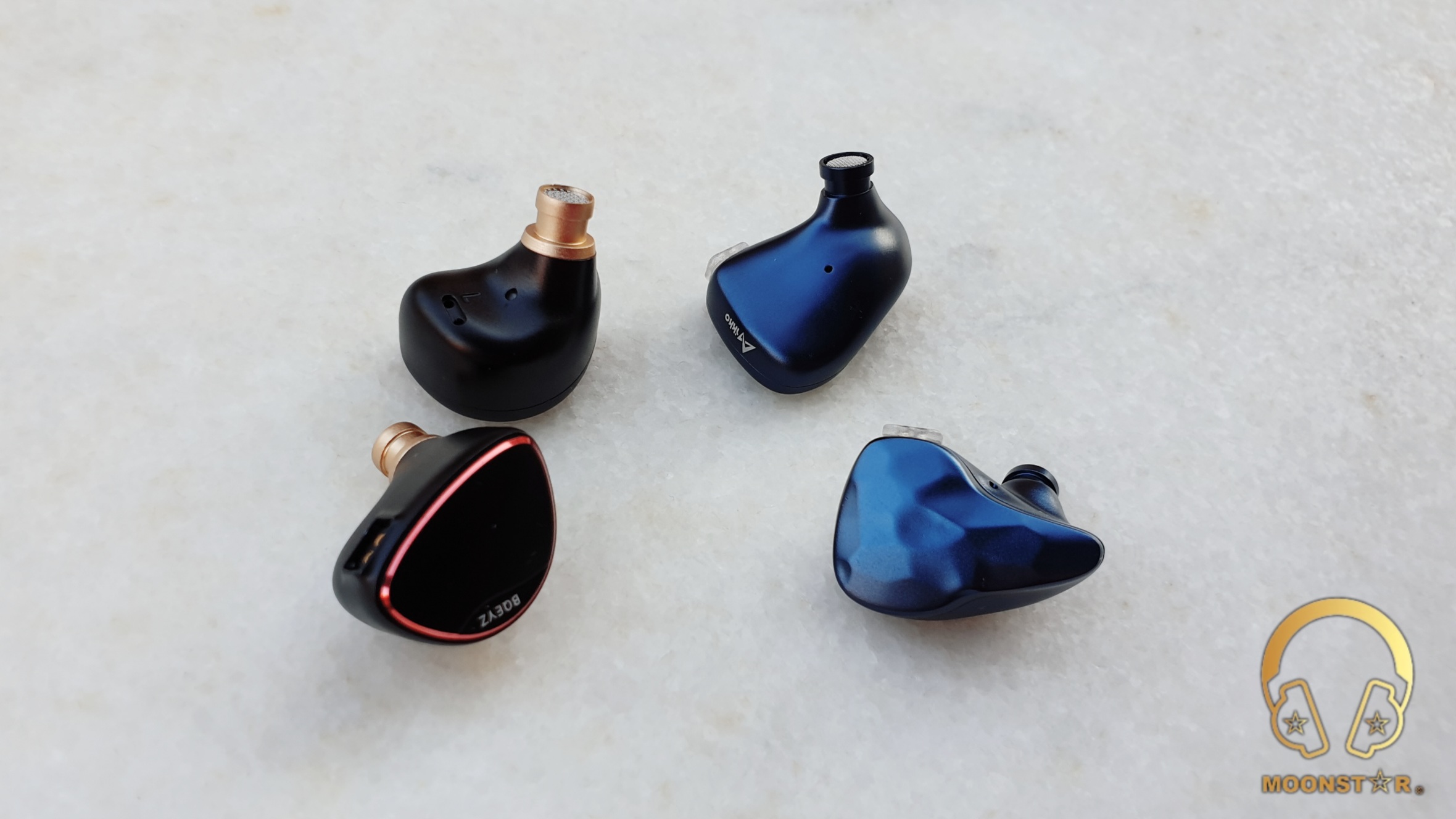 Both the Ikko OH1 and BQEYZ Spring 2 are successful in terms of vocal performance, while the OH1 is a bit more suitable for male vocals due to the lower midrange depth and body. The Spring 2 on the other hand sounds more detailed and realistic while listen to female voices.

The upper midrange and treble region of the BQEYZ Spring 2 is more highlighted/pronounced and shows also a better performance in terms of detail retrieval and overall extension. The upper midrange transitions of the OH1 are slightly more controlled compared to the Spring 2 that offers otherwise a good performance. The treble presentation of the OH1 is smoother and a tad warmer in tonality.

The soundstage of the BQEYZ Spring 2 is more spacious and airy with better level of wideness compared to the Ikko OH1 that has an advantage when it comes to the soundstage depth. 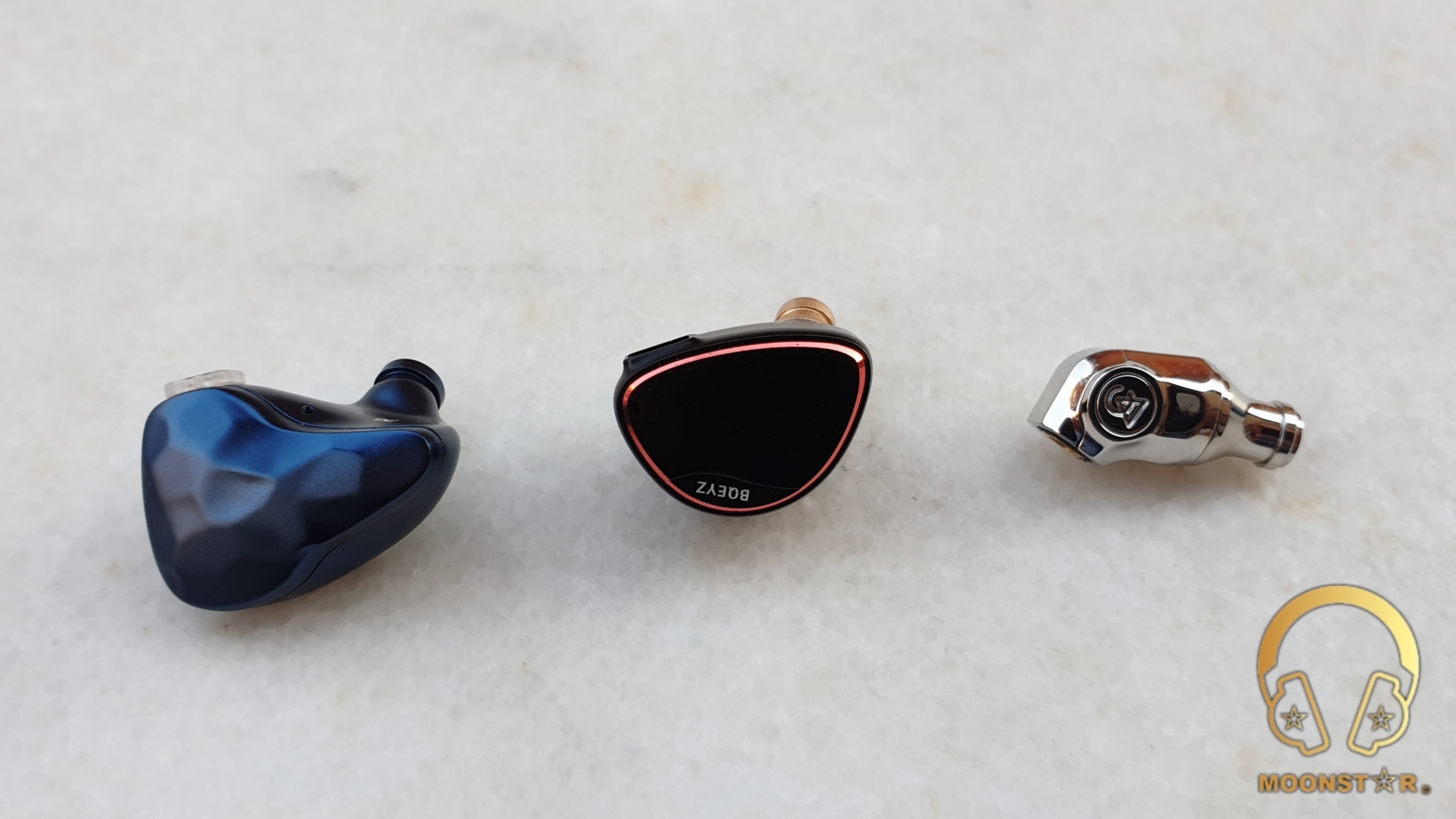 The Spring 1 was one of my favorite Hybrid IEM’s in a product range up to the 300 USD price category, thanks to the very well implemented “Triple Hybrid Driver” configuration. The Spring 2 offers an even more mature tuning with slightly better bass response and musicality, while it retrains the pretty clear and detailed presentation of the Spring 1. The beautiful monitor design and great stock cable are also some remarkable features of the new Spring 2 In-Ear Monitor.