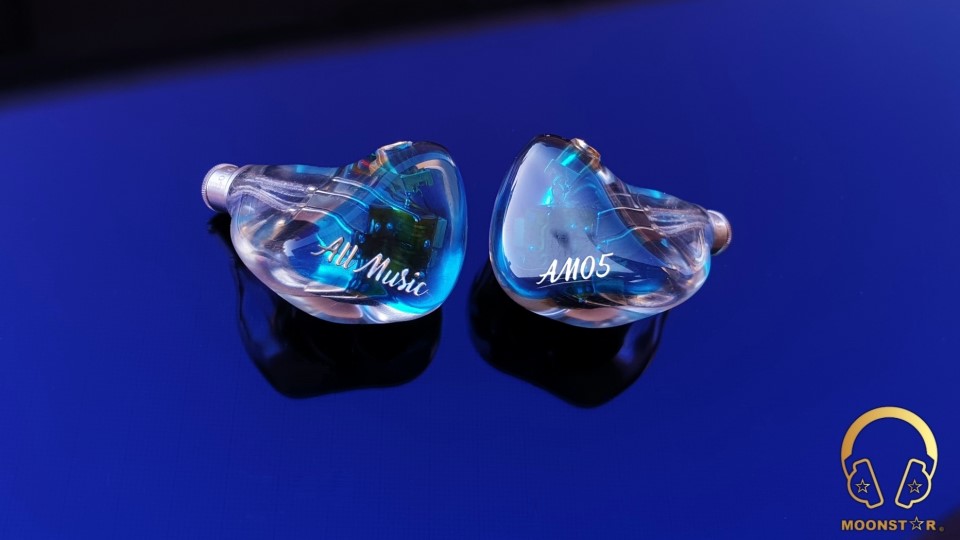 iBasso is a well known Chinese company that is specialized in Portable Audio products such like Digital Audio Players (DAP), Portable Amplifiers and In-Ear Monitors and DAC/AMP dongles. The AM05 that I will now review is the first member of the “AM Series” which is the combination of the words “All Music”.

I would like to thank iBasso for providing me the iBasso AM05 IEM sample for review purposes. I am not affiliated with iBasso beyond this review and these words reflect my true, unaltered opinions about the product.

The iBasso AM05 is available for 299.99 USD and can be purchased under the following link;

The iBasso AM05 came in a rectangular box with the same size and color like the one used for the IT01 and IT01s. This box is wrapped with a glossy card box sleeve in white color that shows the iBasso brand logo and product description on the top and technical detail at the bottom. 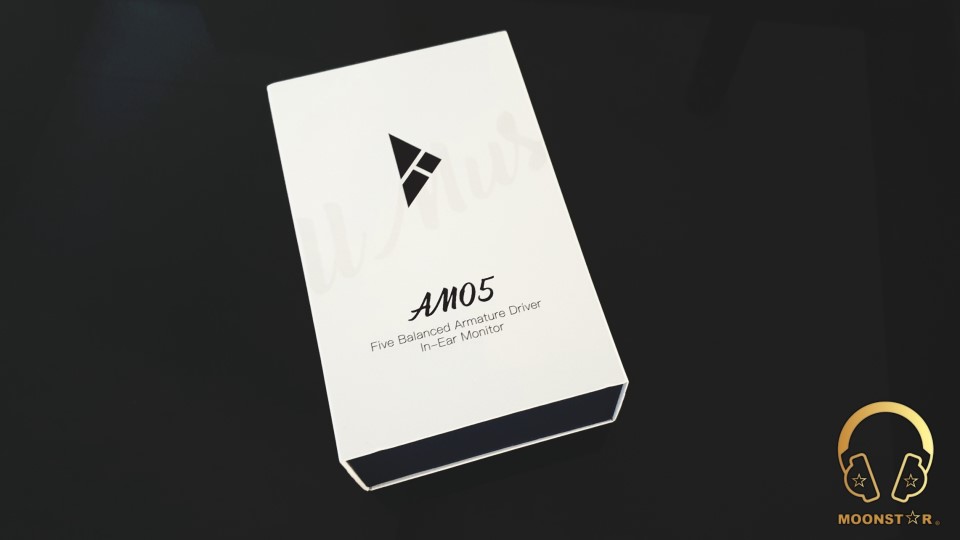 This box includes the following contents; 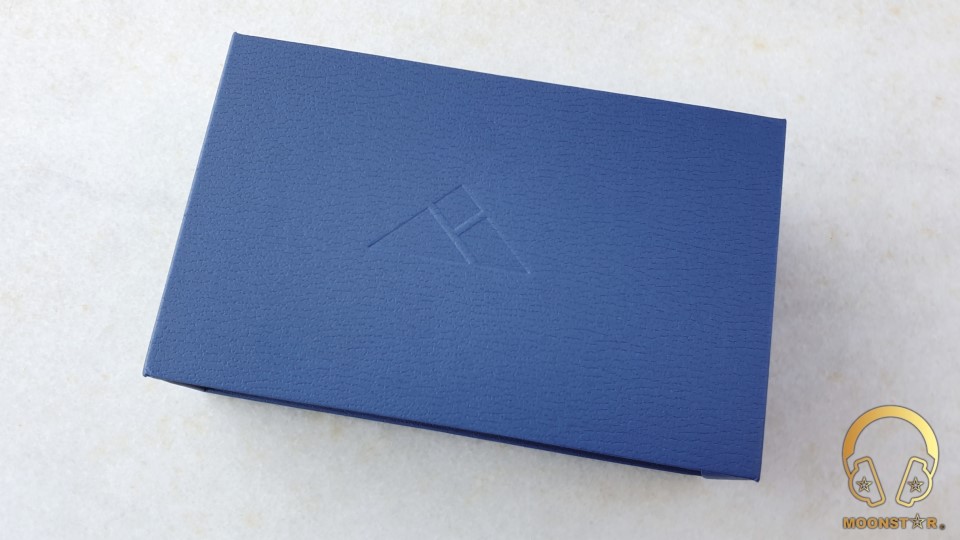 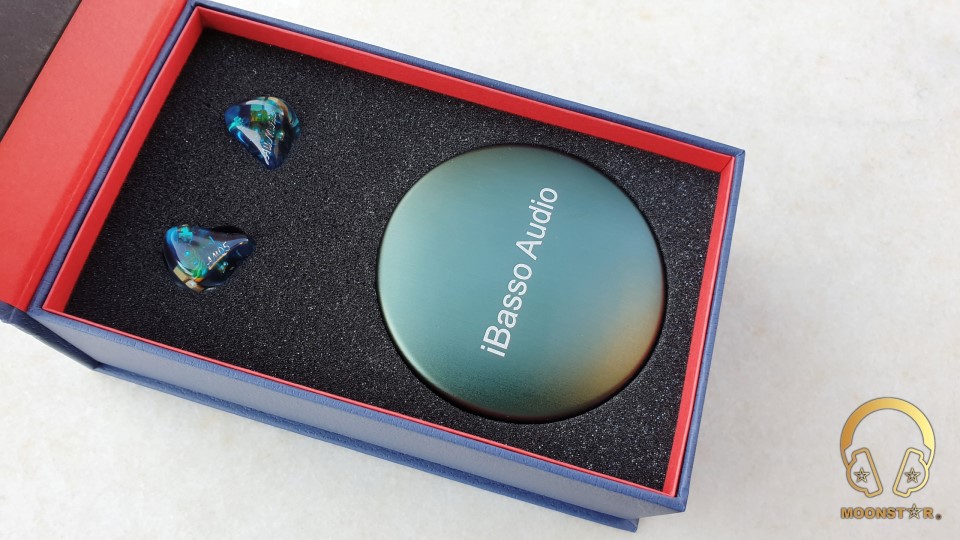 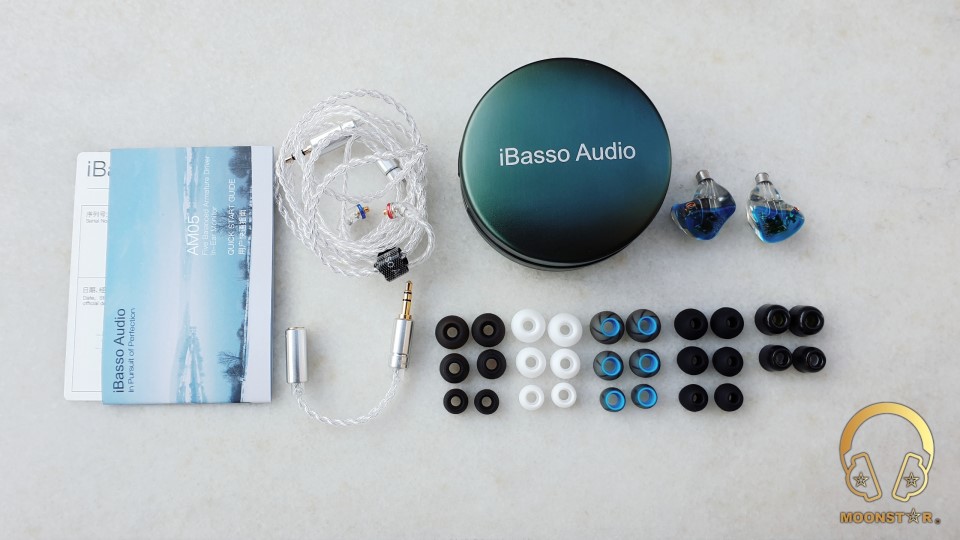 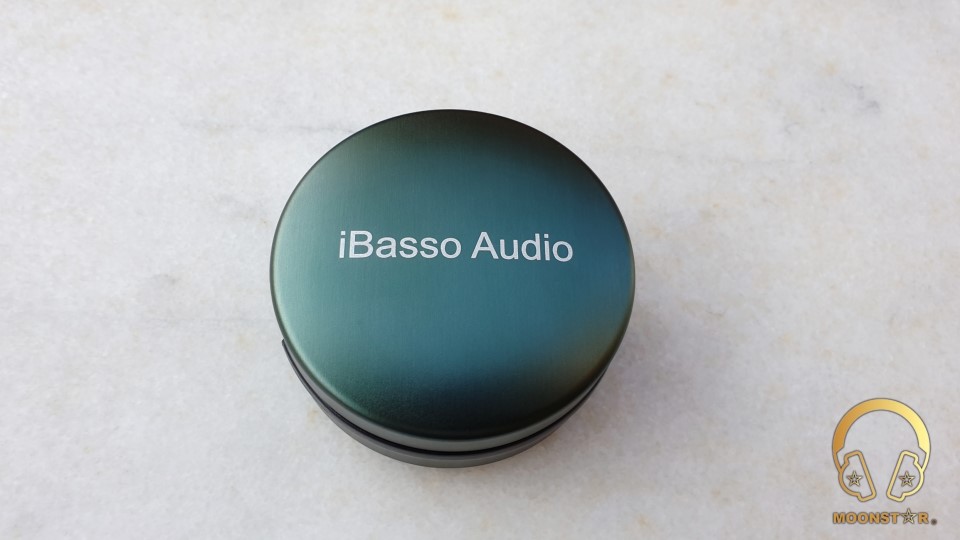 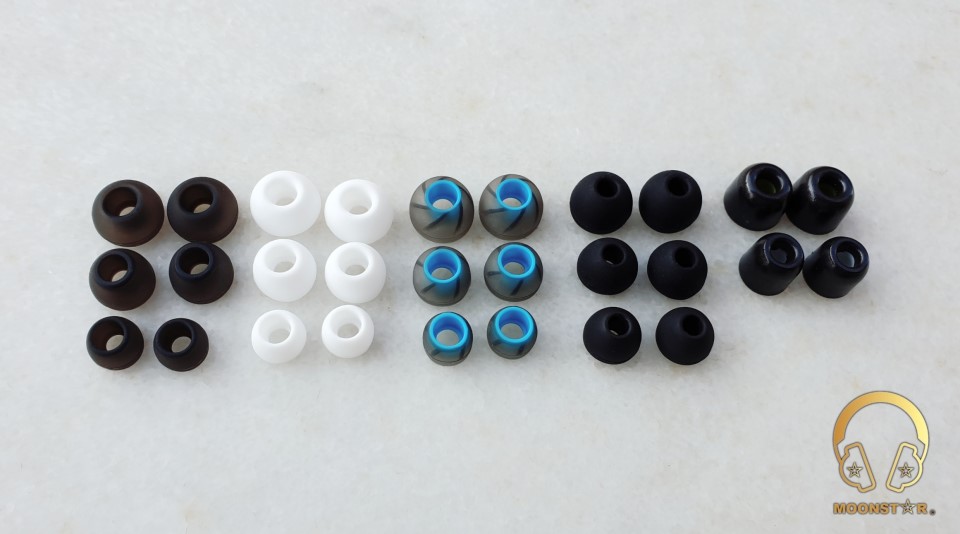 The iBasso AM05 is a nice looking IEM with a Semi-Custom like monitor shape that fits very comfortable to my medium sized ears. The transparent acrylic shell is very well made and you can see all the internal parts like the 5 BA divers, wires, capacitors and tubes, etc. The high transparency of the monitor shells was archived with a so called “Resin Inverted Mold Technology” process. 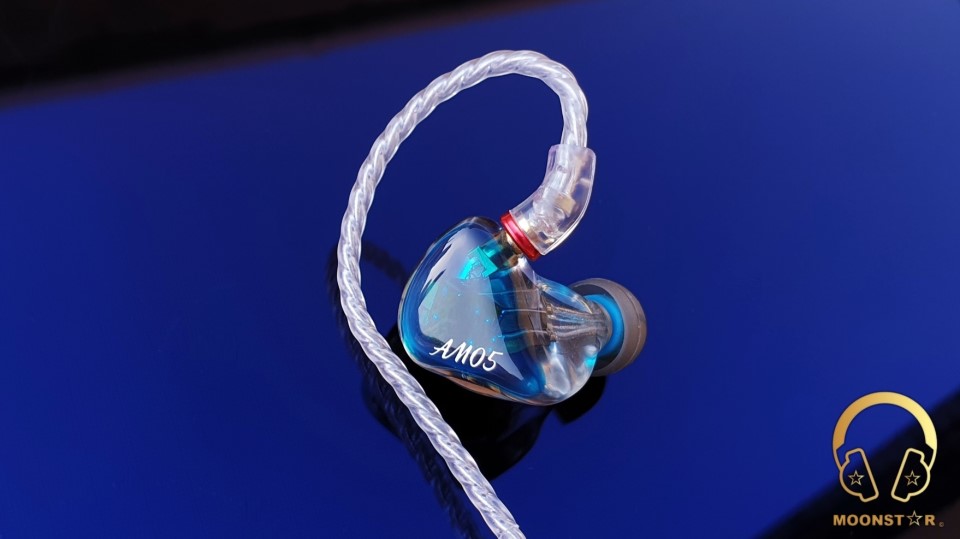 The AM05 is available in two (2) different faceplate color options, which are the variants in blue (turquoise) and green color. On the top of each faceplate are logos in silver color, which are the “All Music” (on the left) and “AM05” (on the right) one.

The transparent inner surface has a curved shape that fits great to the ear concha. 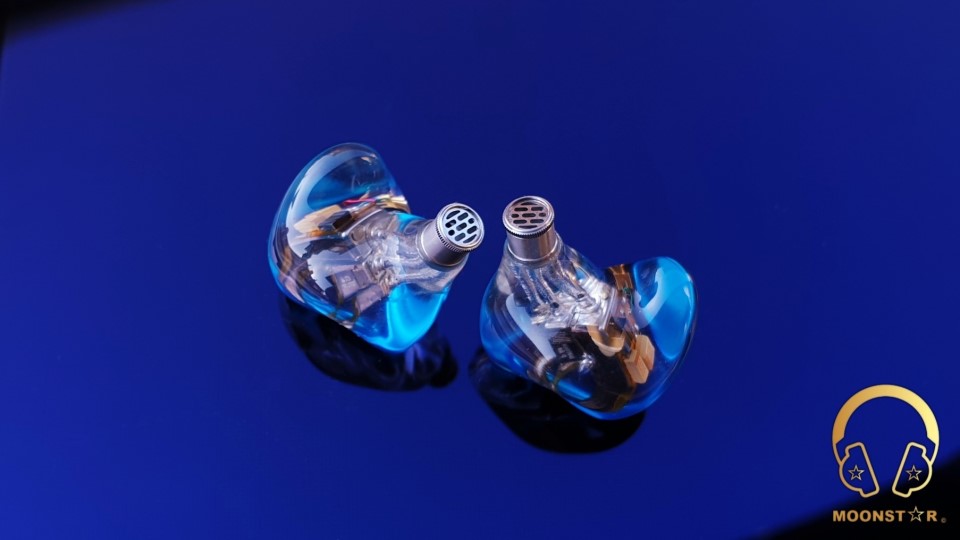 The monitors have slightly angled sound nozzles that are made of “Stainless Steel Material” and that do feature removable screens, which are making the cleaning of the monitor nozzles easier. 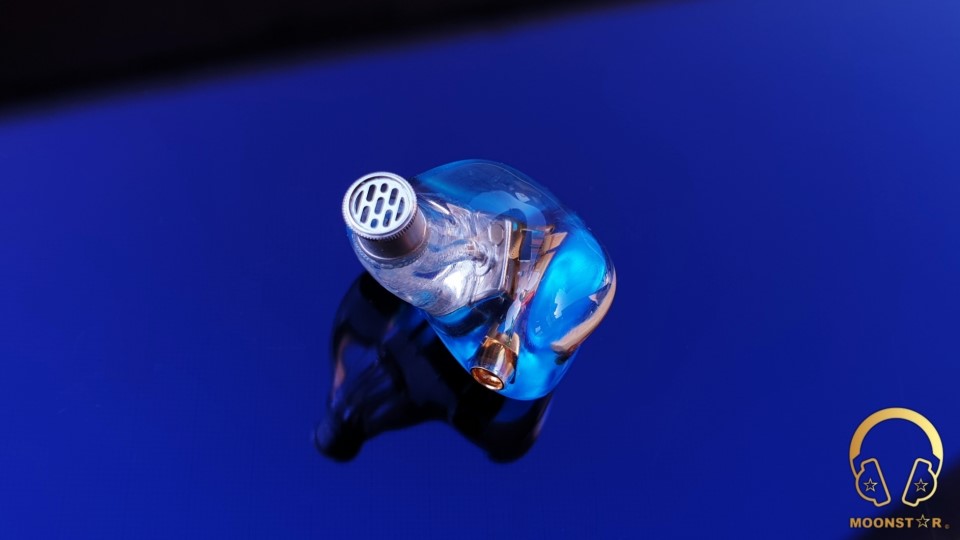 On the top of the monitors are the MMCX (Micro Miniature Coaxial) female connectors that do offer a save and tight fit. 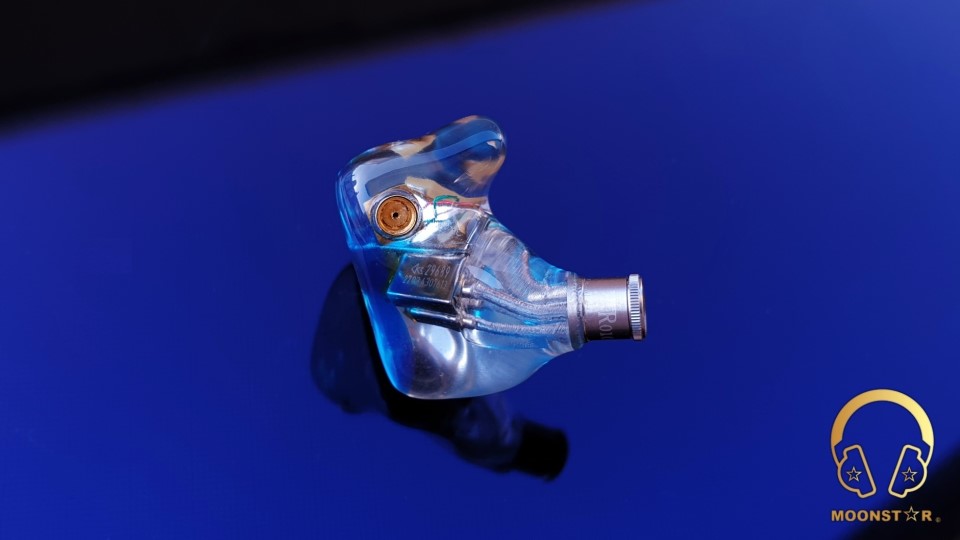 The iBsso AM05 comes with a Silver Plated Oxygen Free Copper that features a pretty soft transparent plastic isolation. 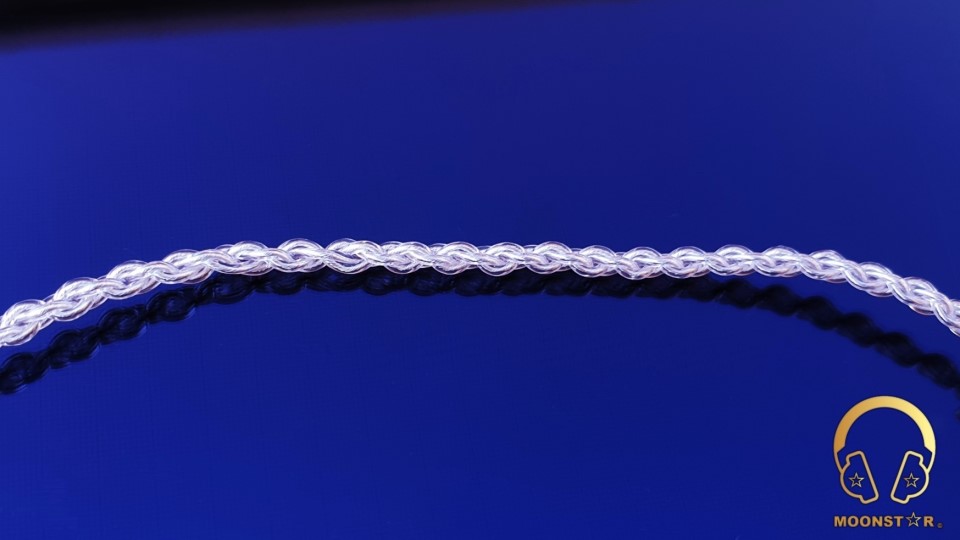 The detachable cable of then AM05 has MMCX male connectors which are protected with a transparent plastic housing that have Left (blue) & Right (red) ring indicators. 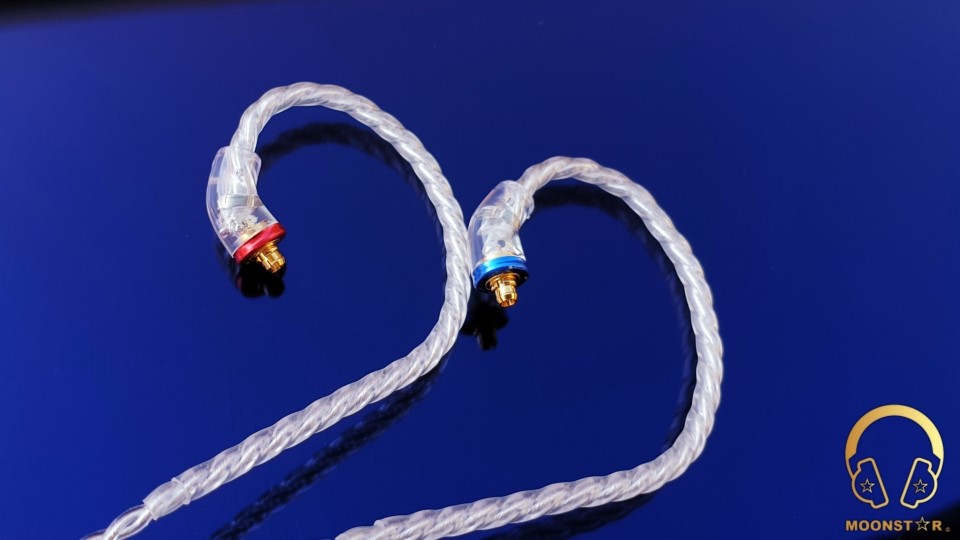 The cable sports a metal Y splitter with iBasso branding and a chin slider made of the same metal material. 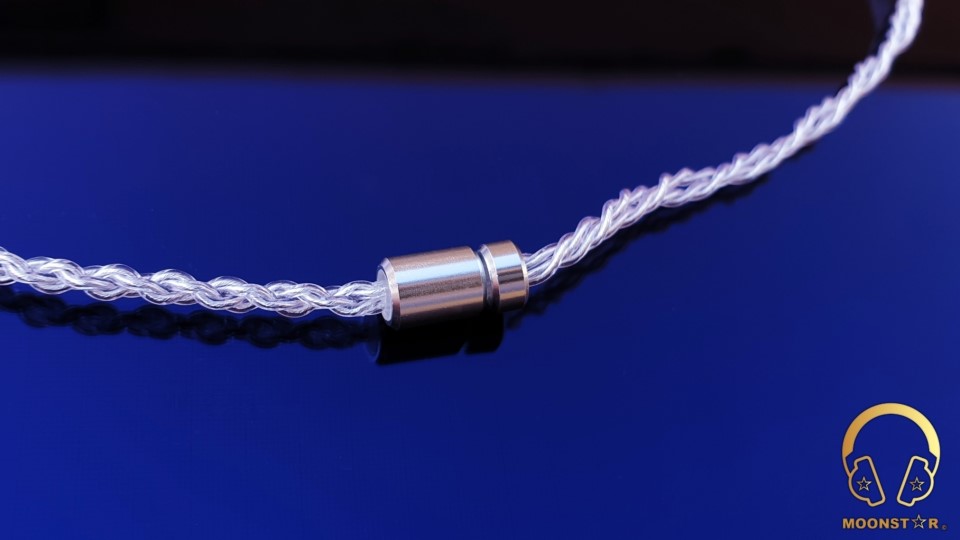 The cable has a straight profiled headphone jack housing with a 2.5mm TRRS (balanced) jack. 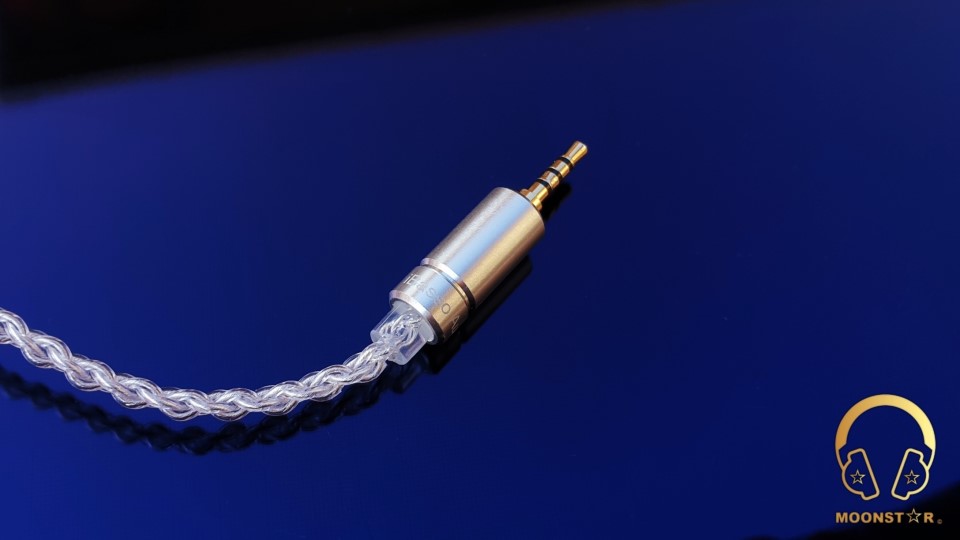 The package is also including a 2.5mm TRRS to 3.5mm TRS adaptor, which allows you to convert the single ended connector to a regular 3.5mm TRS (unbalanced) headphone jack. 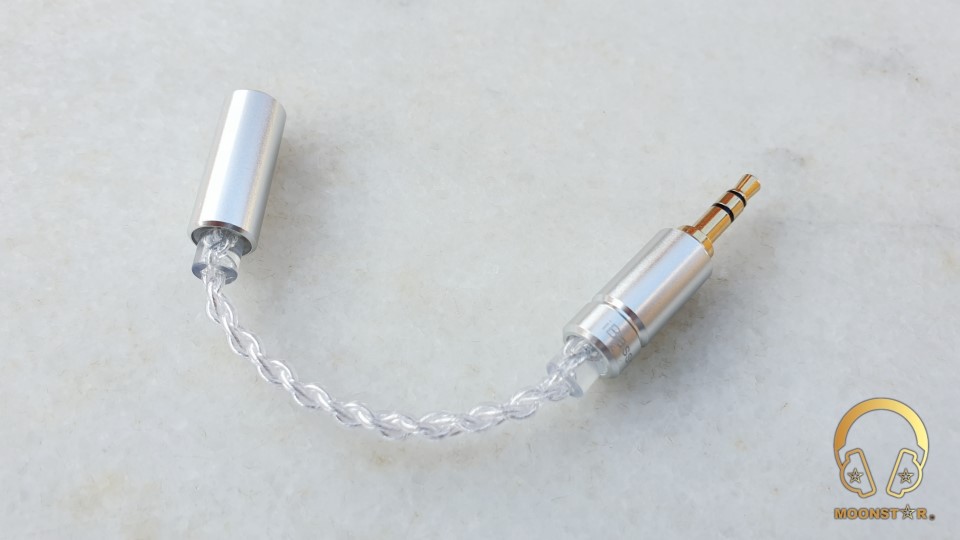 The comfortable design of the AM05 is according to iBasso a result that was archived thanks to a big data collection of different auricles. Each comfortable fit and the lightweight housing that weights only 6.6grams makes the AM05 ideal to wear for long listening periods. The isolation of the iBasso AM05 is also above average and good enough to isolate you in fairly noisy environments like bus, metro, train, etc. 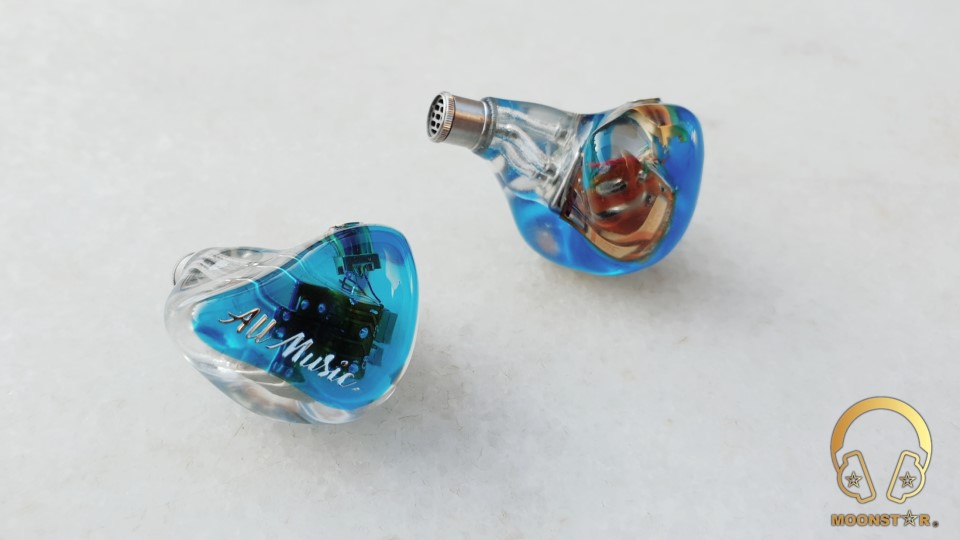 The iBasso AM05 is a pretty easy to drive In-Ear Monitor with an impedance of 32 ohms and a sensitivity of 115dB. My test with several devices shows that the AM05 can be used with relative weak sources like Smartphone’s, Tablets or smaller sized DAP’s, but that it shows its true potential over a more powerful source such like a DAP, ADMP or DAC/AMP with a powerful (2.5mm balanced) output. 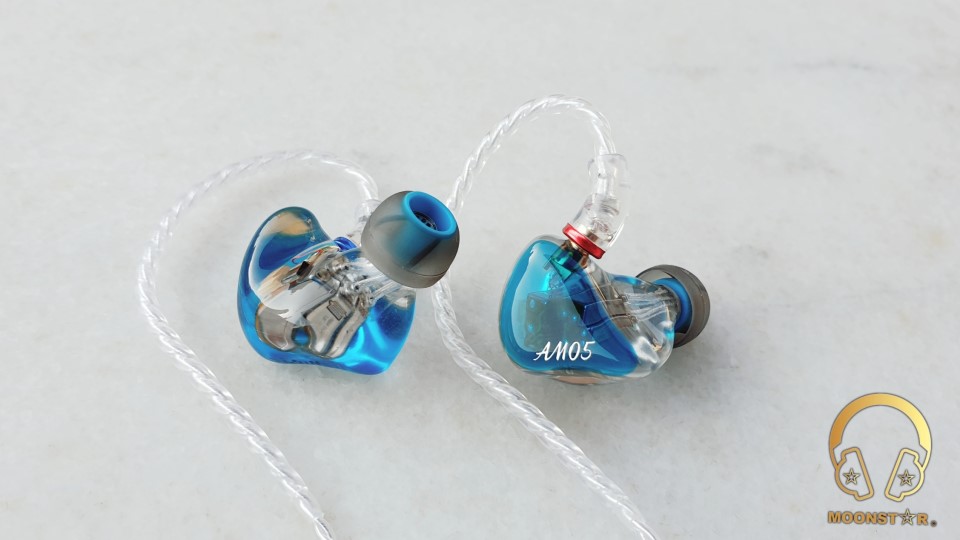 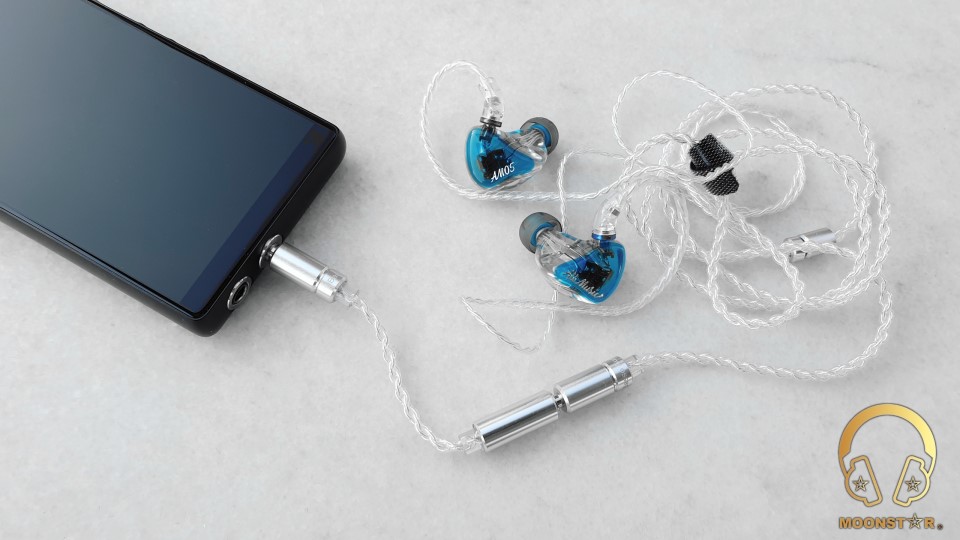 The subbass of the iBasso AM05 is quite successful and sufficient in genres like pop / edm / hiphop and was able to overcome some deep and complex bass passages in songs like Gogo Penguin’s “Raven”, Massive Attack’s “Angel” or Lorde’s “Royals”. 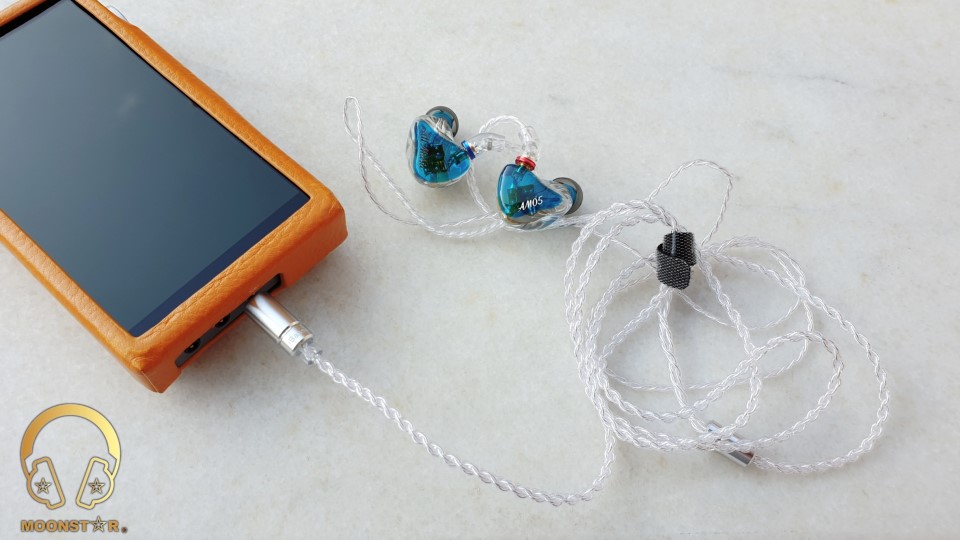 Instruments like drums or trumpets are pronounced soft and warm in tonality. The general tonality of this region is musical and entertaining that makes the AM05 pretty successful with genres like pop, edm, trance or hip-hop.  Percussion instruments such as cross drums or snare drums have a good level of emphasis and do show pretty soft hits. Other midbass intensive instruments such like the bass guitar and contrabass do show a nice temperature/warmth, depth and thickness.

The general bass quantity and intensity is slightly above a neutral. The bass speed and tightness of the AM05 is on a moderate level. 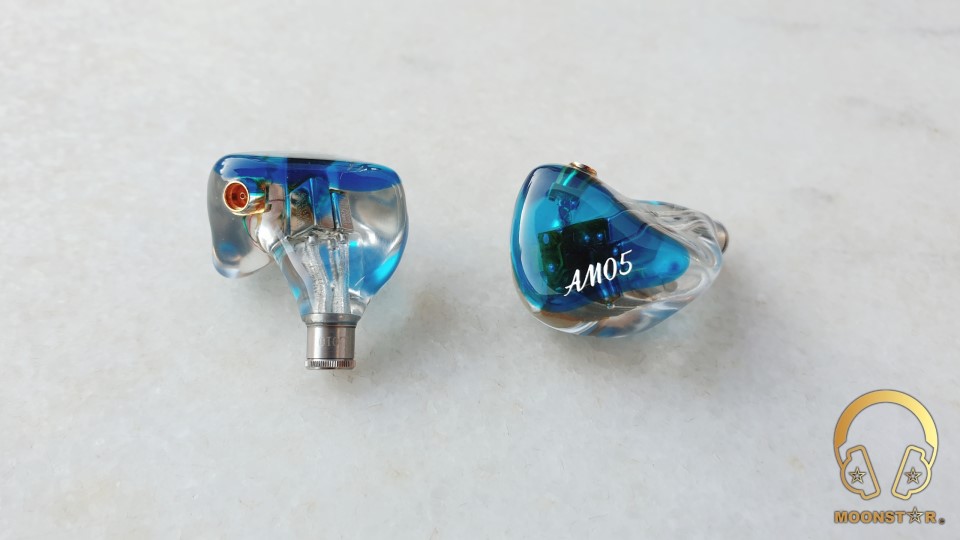 The iBasso AM05 offers a warmish, full bodied, soft and musical midrange presentation. The level of transparency and airiness in this frequency range is on a pretty good level and it doesn’t show any remarkable negative conditions such as sibilance or harshness.

The lower midrange of the AM05 is good in terms of dept, warmth and fullness, which is an advantage for the presentation of male vocals. Male vocals do shows a good level of depth and fullness and are pretty rich in terms of detail, which I have experienced with some of my favorite vocals like Elton John, Eric Clapton, David Bowie or Dave Gahan. 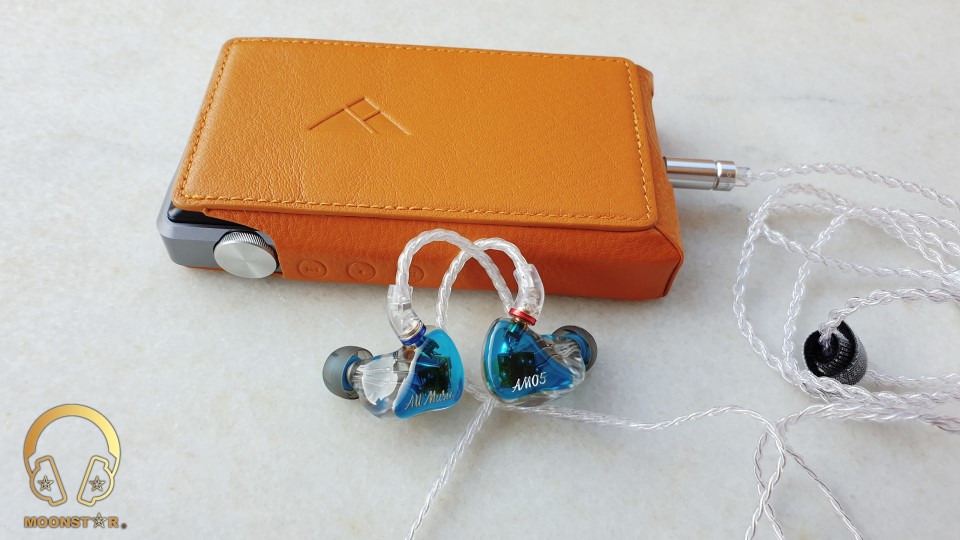 The upper midrange of the iBasso AM05 has a good amount of intensity and extension which makes the female vocals slightly more detailed than male vocals. Female vocals are presented in a slightly warmish, pretty transparent and lively way. Something that makes the vocal presentation of the AM05 very impressive is that every emotion and detail such as all sorrow, enthusiasm or softness is clearly to hear. All in all, female vocals have an above average performance thanks to the successful detail and extension of the upper midrange.

The iBasso AM05 has a warmer than neutral pretty lively, musical and smooth instrument tonality. Instruments like pianos are presented with a bright, accented and vivid tonality. Acoustic guitars on the other hand are warmish (mildly warm), slightly bassy and musical, while violins are a bright but fatigue-free tonality.

The upper midrange of the iBasso AM05 is soft, slightly war m and bright and shows a well tuned intensity. The upper midrange transitions are in general soft, without to show any remarkable sibilance or harshness, even in genres like metal music. This ability makes the AM05 for an ideal IEM for those who are sensitive to treble sharpness.

What makes the AM05 also impressive is that it is possible to hear the details from violin to flutes, from female vocals to pianos, as the upper midrange is emphasized but at the same time pretty controlled. This region shows also a good level of airiness and space.

The treble range of the iBasso AM05 comes slightly from the background and shows a smooth, slightly warmish and mildly bright/soft tonality.  The treble presentation of the AM05 has enough airiness and shimmer to prevent conditions such as congestion and muddiness.

The lower midrange is more pronounced than the upper treble region, which decreases in a controlled manner. This tuning makes the iBasso AM05 to an IEM that is successful and musical with nearly all kind of music genres.

Instruments like hi-hats do come in general a touch more from the background and do show a shorter extension. Other Instruments like crash cymbals have the same positioning while the extension is higher. The treble extension, intensity and quantity of the AM05 can be classified average.

The iBasso AM05 offers a soundstage with a good level of separation and positioning of both vocals and instruments. The soundstage of the AM05 has a moderate width and above average depth with sufficient amount of neutral air between the instruments which makes the overall soundstage presentation fairly airy.

iBasso AM05 versus Final Audio B2:

The Final Audio B2 shows a warmer, smoother and softer tonality than the iBasso AM05. Both IEM’s are successful in terms of subbass depth, but the AM05 is superior when it comes to the control and extension. The Final Audio B2 has the upper hand for midbass quantity and intensity, but doesn’t sound as controlled like the AM05 in complex bass passages.

The midrange of the Final Audio B2 is slightly more upfront than those of the iBasso AM05 and shows better lower midrange depth. The AM05 is superior to the B2 in terms of midrange clarity and upper midrange detail retrieval, which is the main reason why it sounds more lively and natural than the B2. 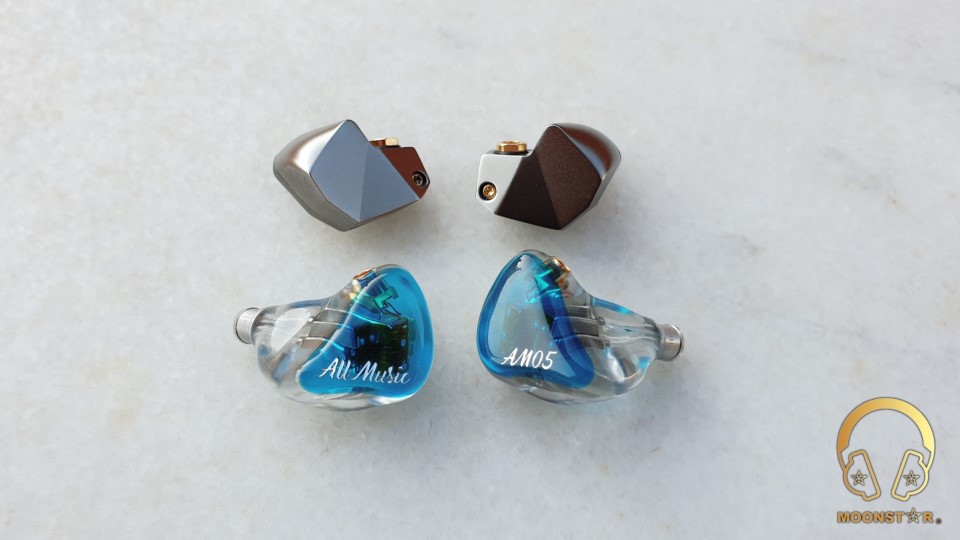 The iBasso AM05 is superior in terms of soundstage width and airiness, while Final B2 shows slightly better depth. The AM05 has also the upper hand in terms of separation and placement of vocals and instruments.

iBasso AM05 versus FiiO FA7:

The FiiO FA7 has a pretty U shaped sound signature where the midrange is behind the strong bass and sharp treble range. The general tonality is warmer than neutral, with a warm & entertaining bass and slightly warmish midrange and treble tonality.

Both the FA7 and the AM05 are pretty close in terms of subbass depth, while the AM05 has the slightly edge for quantity and extension. The FiiO FA7 has more midbass quantity, impact and extension compared to the AM05. 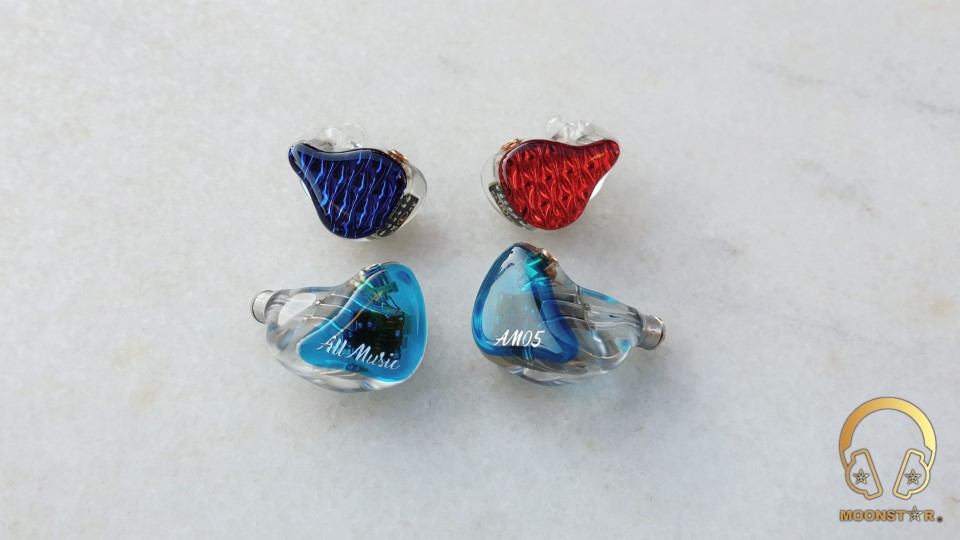 The midrange of the iBasso AM05 sounds more emotional and musical compared to the FA7 that is slightly more edgy and dry. The FiiO FA7 has the upper hand in terms of lower midrange, while the upper midrange of the AM05 is more detailed and lively than those of the FA7.  The treble range the FiiO FA7 is brighter and shows more extension, while the iBasso AM05 is superior in terms of treble control and musicality.

When it comes to the soundstage performance I can say that the iBasso AM05 has a wider stage, while the difference in terms of soundstage depth is very low. The AM05 shows more space and neutral air between the instruments compared to the FiiO FA7. 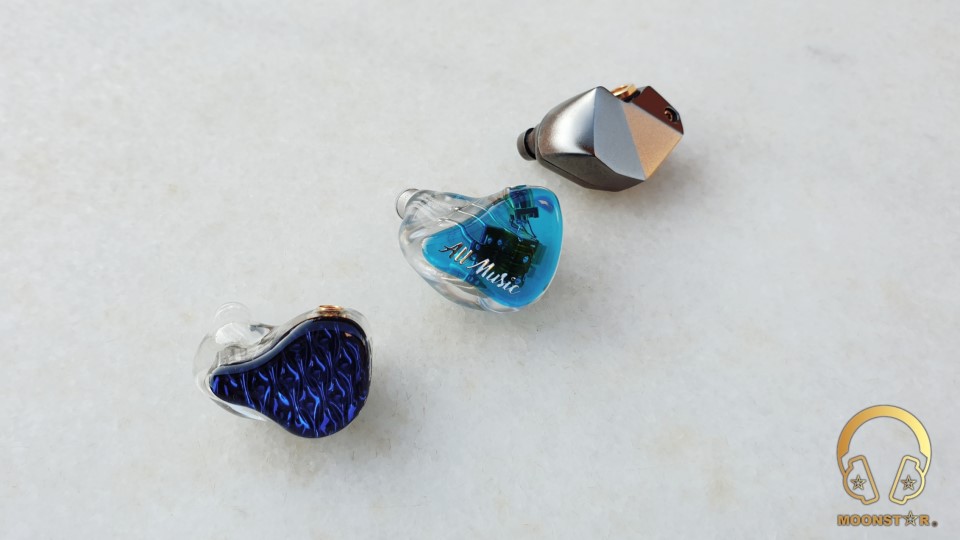 The iBasso AM05 is an impressive and talented IEM that will satisfy you with its well tuned V shaped sound signature and musical presentation that is suitable for a wide variety of genres. The AM05 offers beside the “All Music” sound signature beautiful monitors, which are supplied with a rich accessory package such as the 2.5 mm adapter to 3.5 mm adapter, a high quality cable and a large selection of ear tips that makes it for me a highly recommended IEM at this price range.