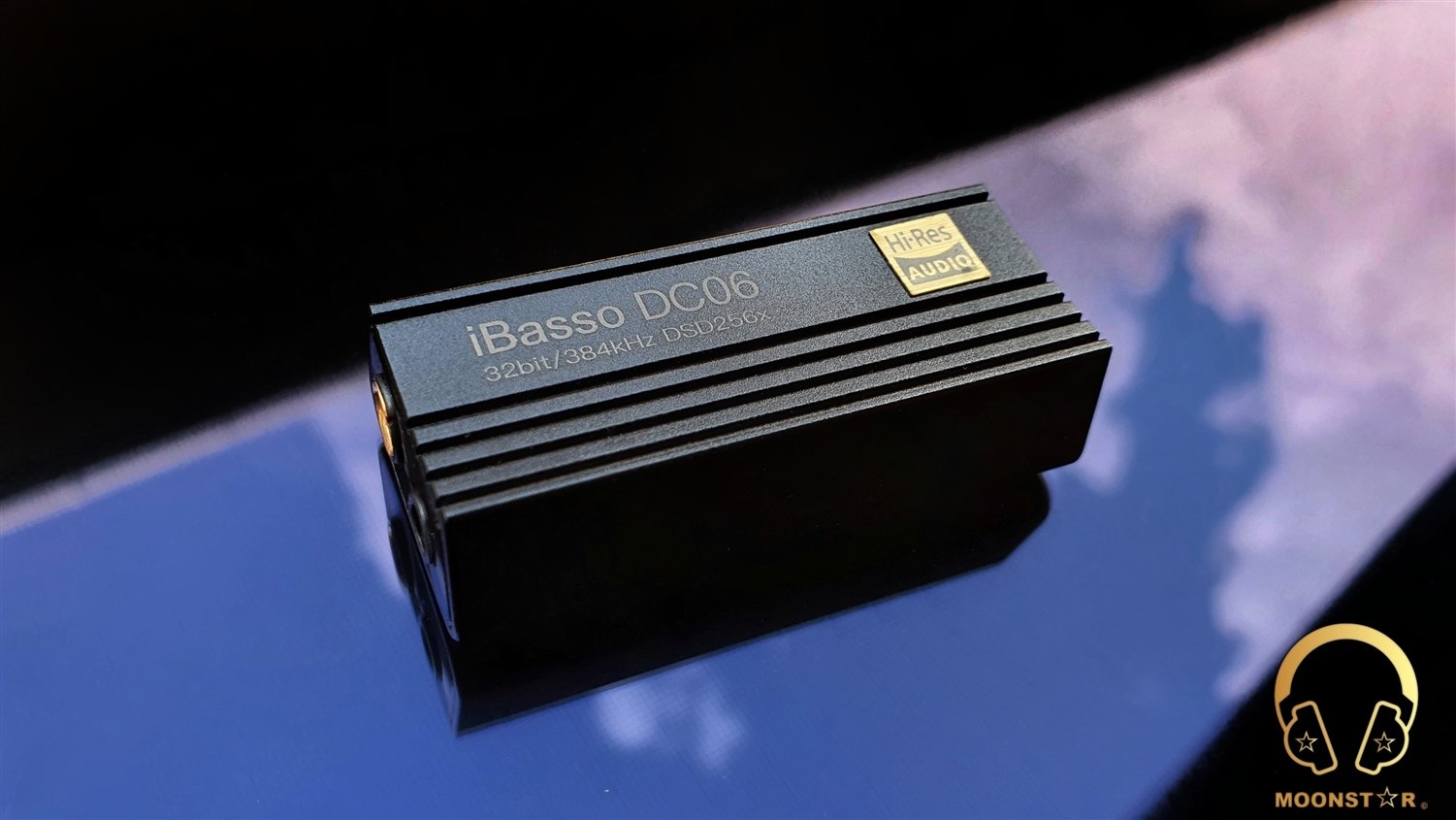 The DC06 is iBasso’s flagship USB DAC/Amplifier Dongle that comes with both 3.5mm Single Ended and 4.4mm balanced output. It is equipped with two ES9219C QUAD DAC (Digital to Analog Converter) Chips that supports MQA 16x unfold, 32-bit/384kHz PCM and native DSD decoding up to DSD256. The true balanced amplifier section offers a quite impressive output power of up to 320mW@32Ω.

I would like to thank iBasso for providing me the DC06 USB DAC/Amplifier Dongle as review sample. I am not affiliated with iBasso beyond this review and these words reflect my true and unaltered opinions about the product!

The actual price of the iBasso DC06 is 119.00 US$. More information’s can be found under the link below;

The iBasso DC06 came inside a small transparent plastic box that show some product related brandings o the top and information’s rear surface. 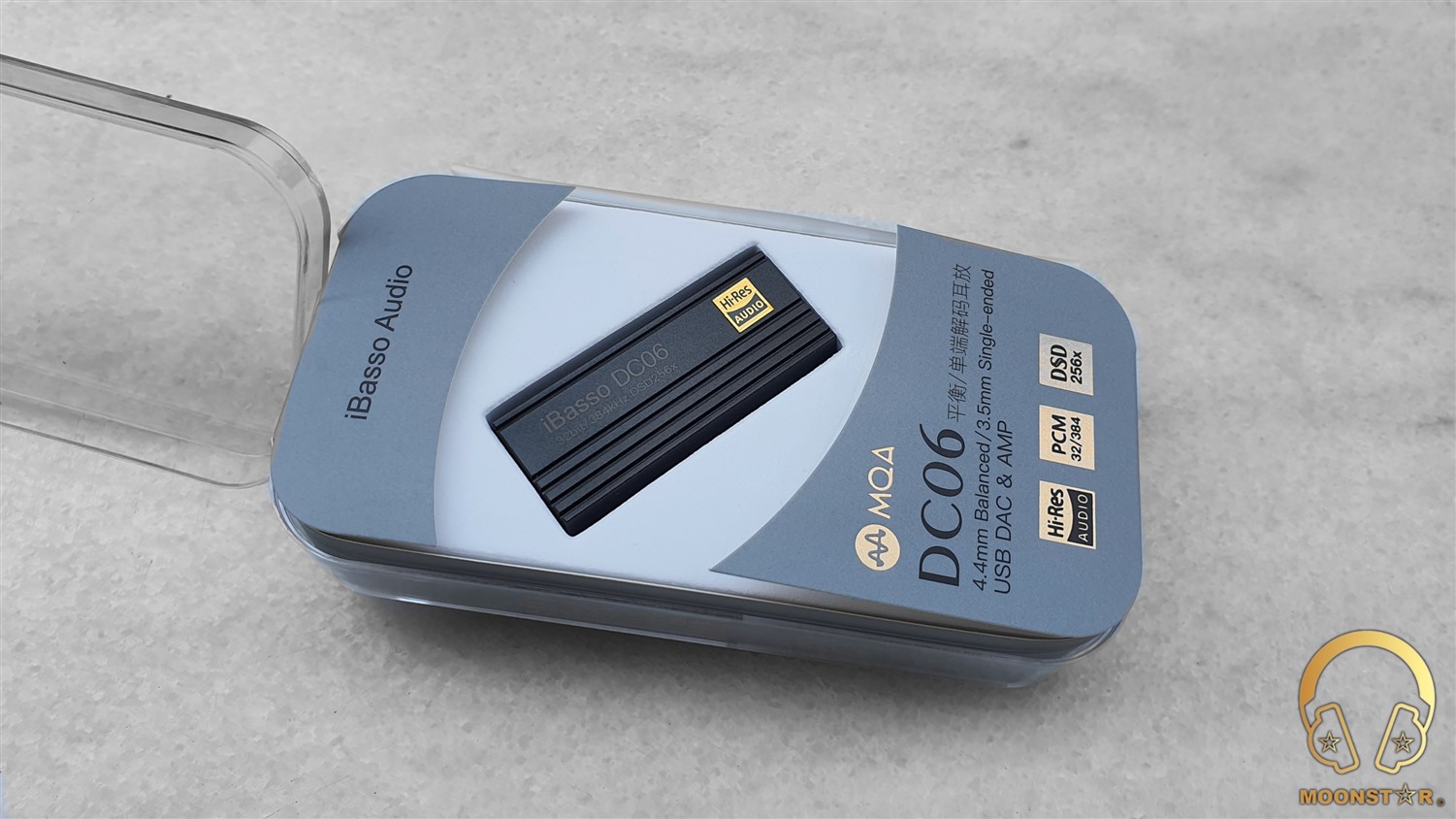 Inside the box are the following contents & accessories; 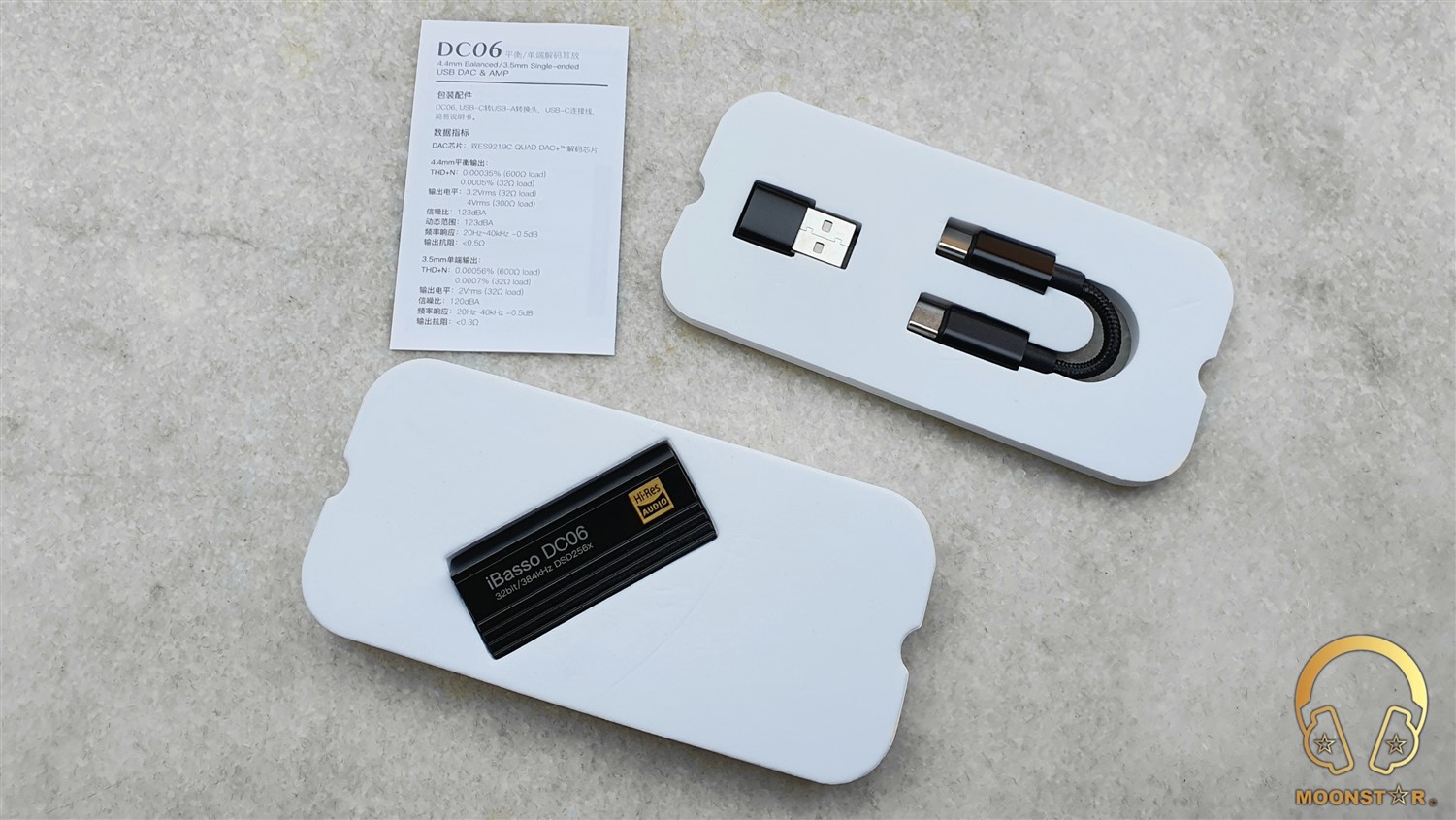 The DC06 has a different design compared to previous models such like the DC03 or DC04 of the company. It has now a retro look with its upper surface that shows channels that do remind me to the housing design of classic car amplifiers from the 80 and 90’s, while the rear surface has a curved shape with rounded edges.

It’s an all metal housing with dimensions of 23mm x 50mm made from CNC machined aluminum material with a nice surface finish in black color. The DC06 is an object that feels sturdy in your hand, which has weights about 23grams. 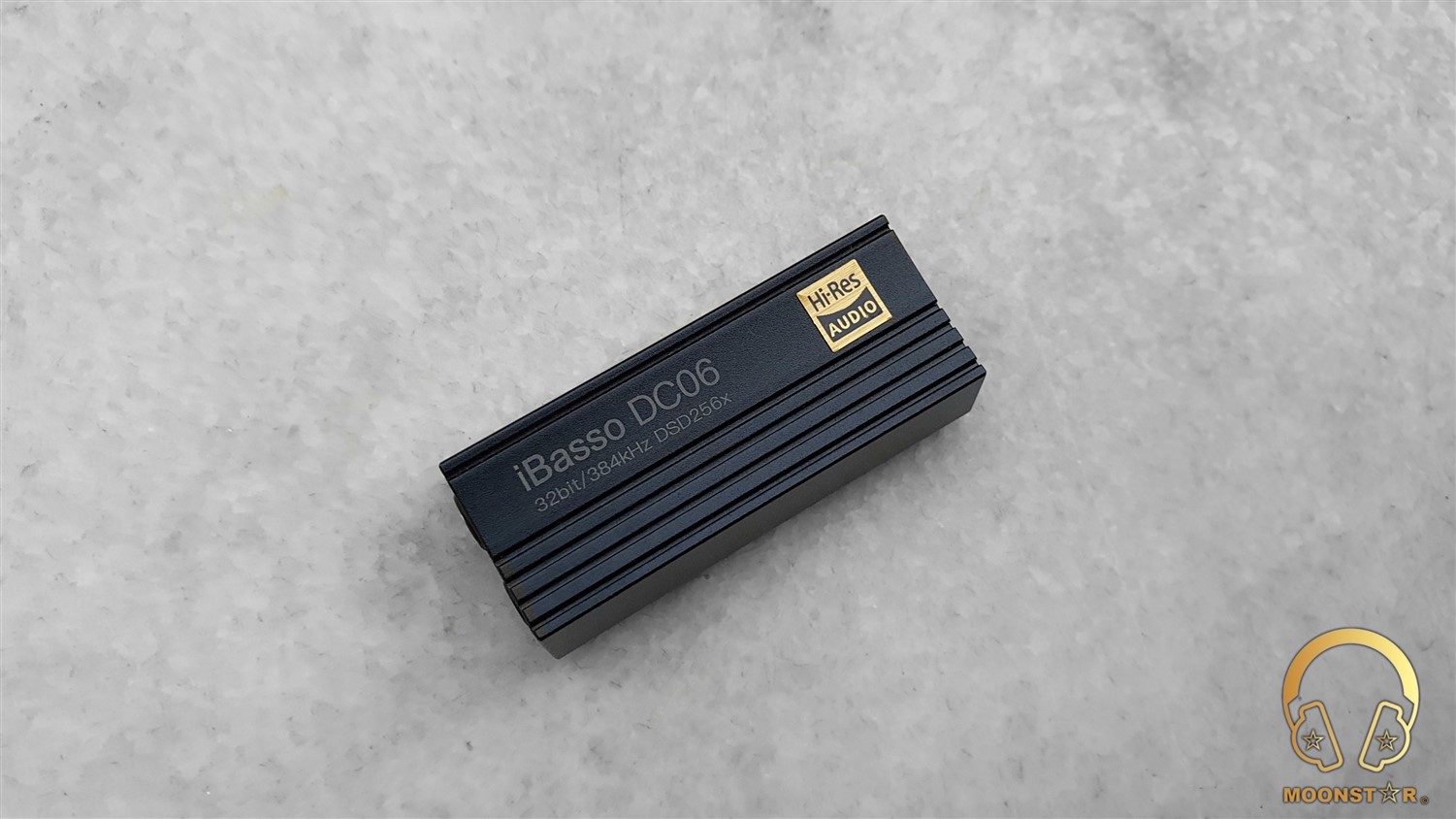 On the top of the device is the iBasso DC06 and 32bit/384kHz DSD256 branding in white color and a Hi-Res Audio sticker. 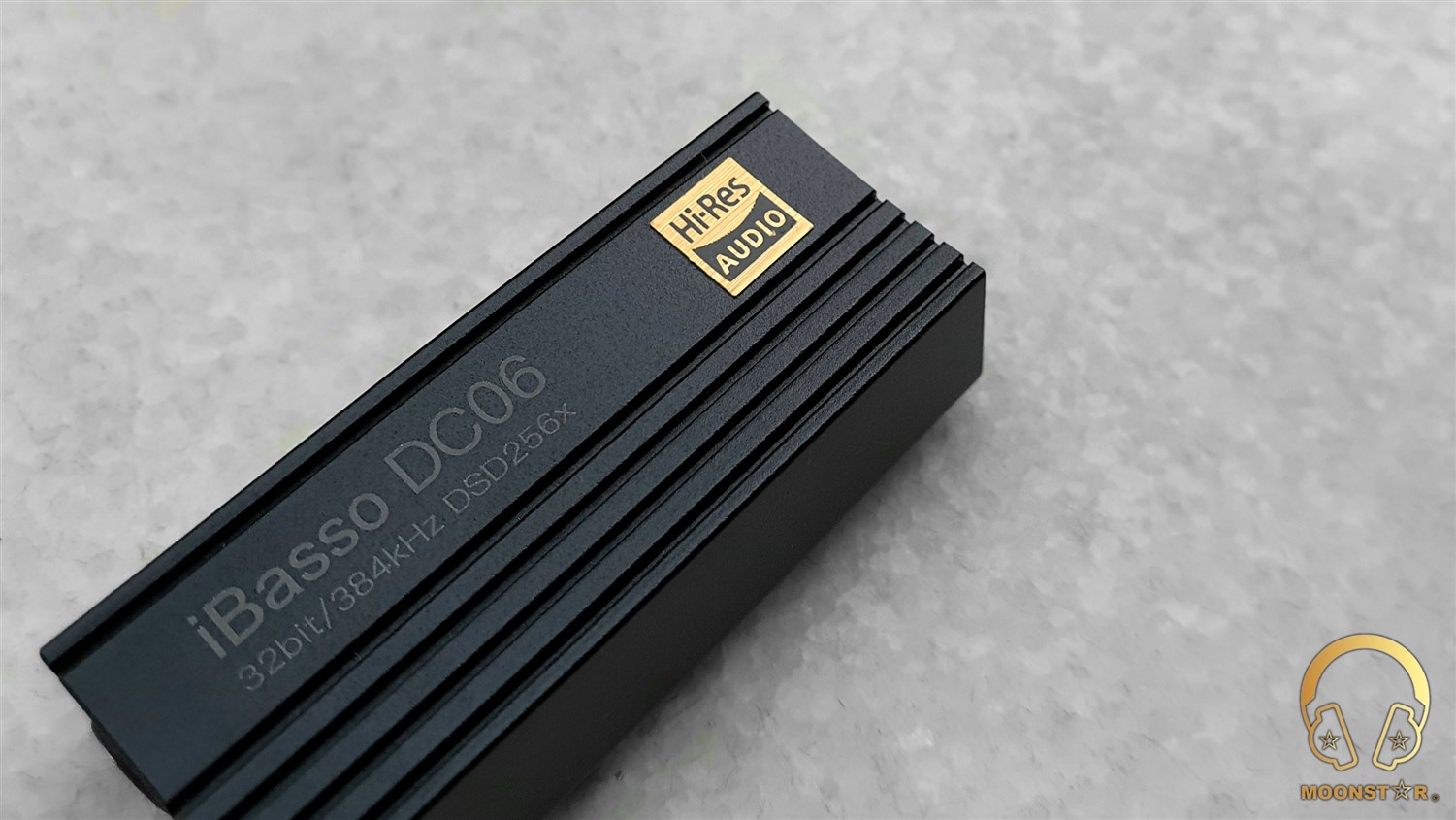 On the front of the DC06 are the 3.5mm Single Ended and 4.4mm Balanced outputs with a small LED light indicator that is located in the middle of this outputs. 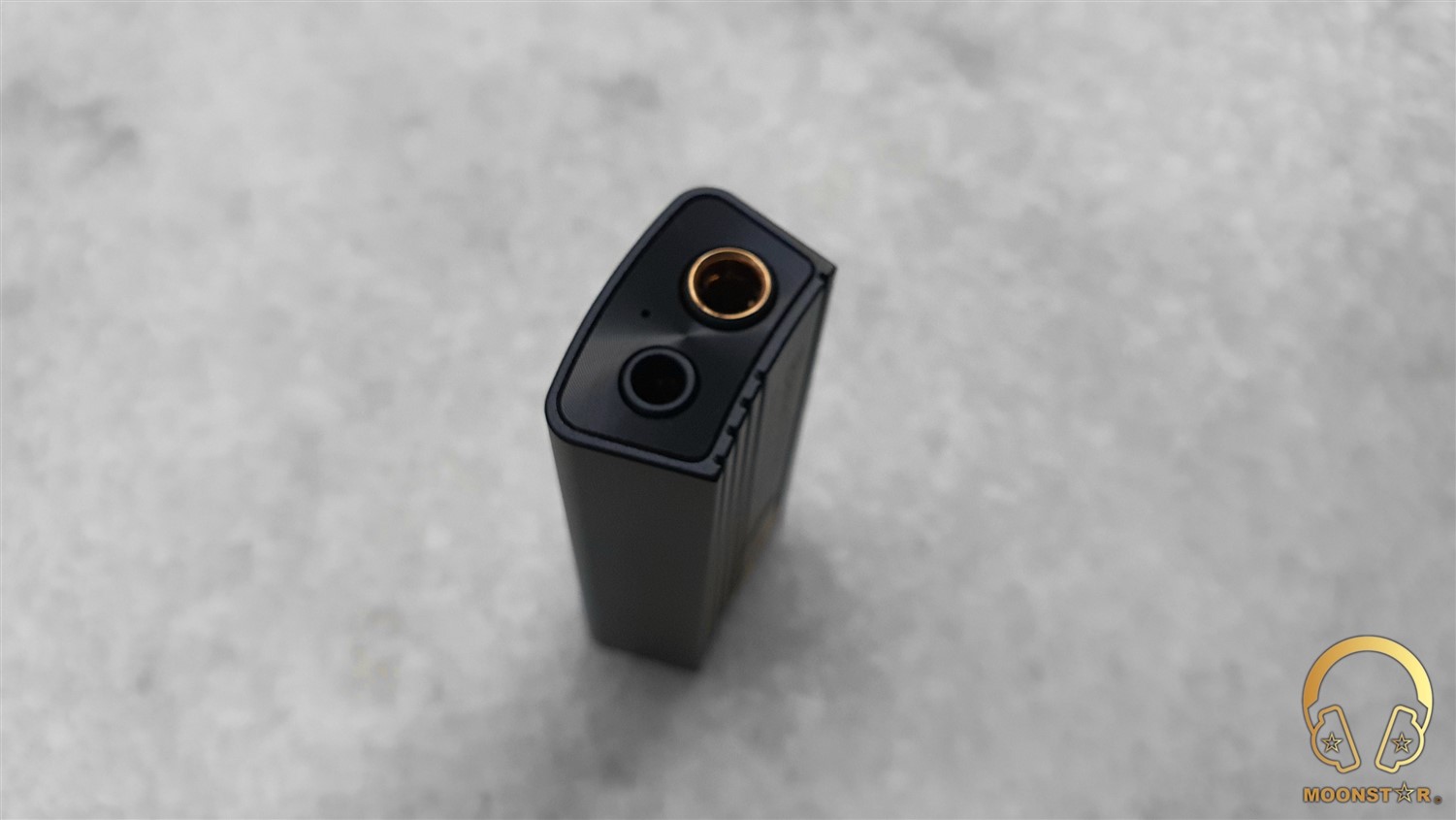 The LED indicator glows in different colors depending on the status and bitrates, which are Red on standby, Blue on DSD, Green on PCM and Magenta when the device is in MQA rendering mode. 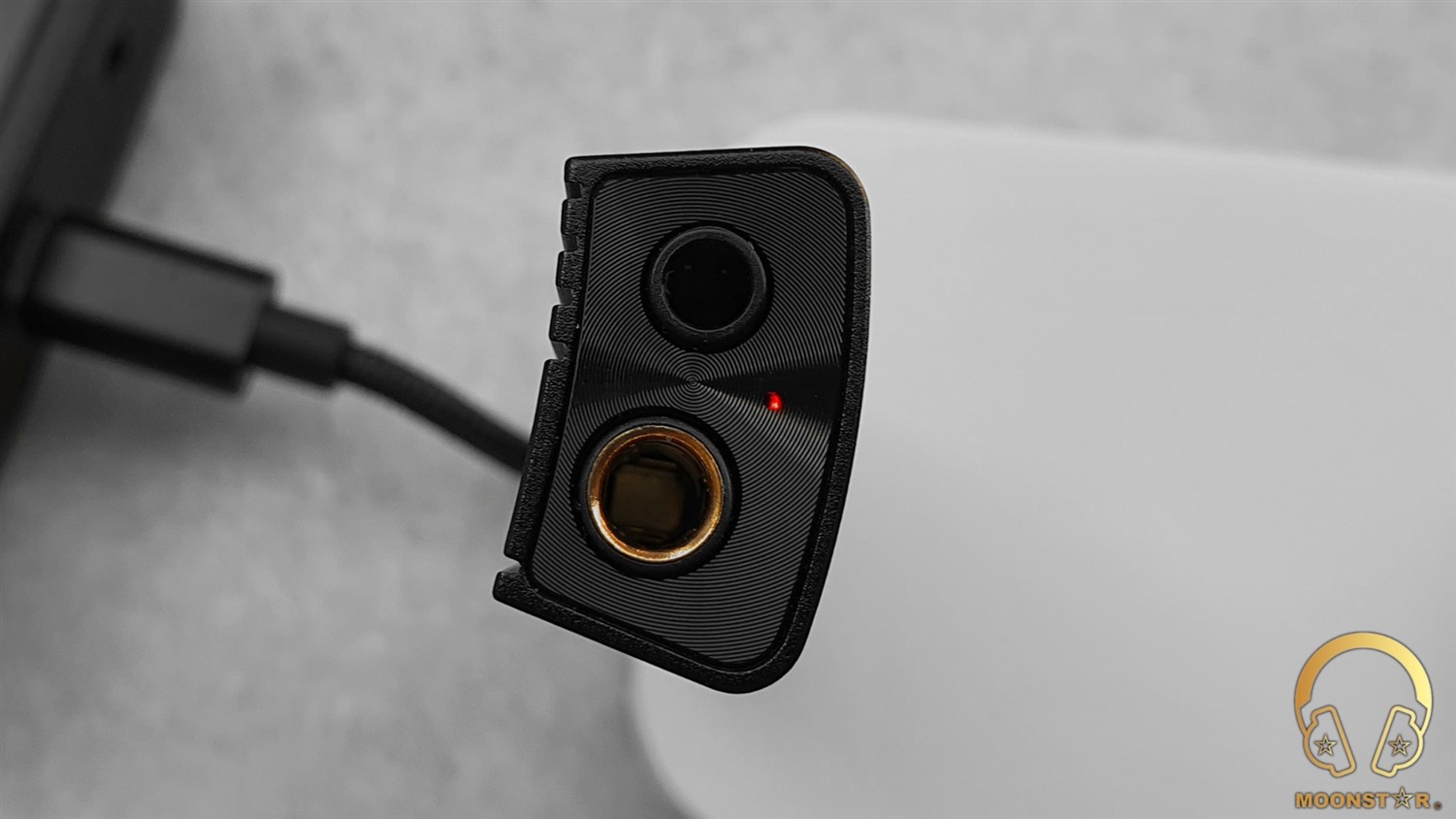 The backside rear side of the housing are some product related brandings and some industrial certifications. 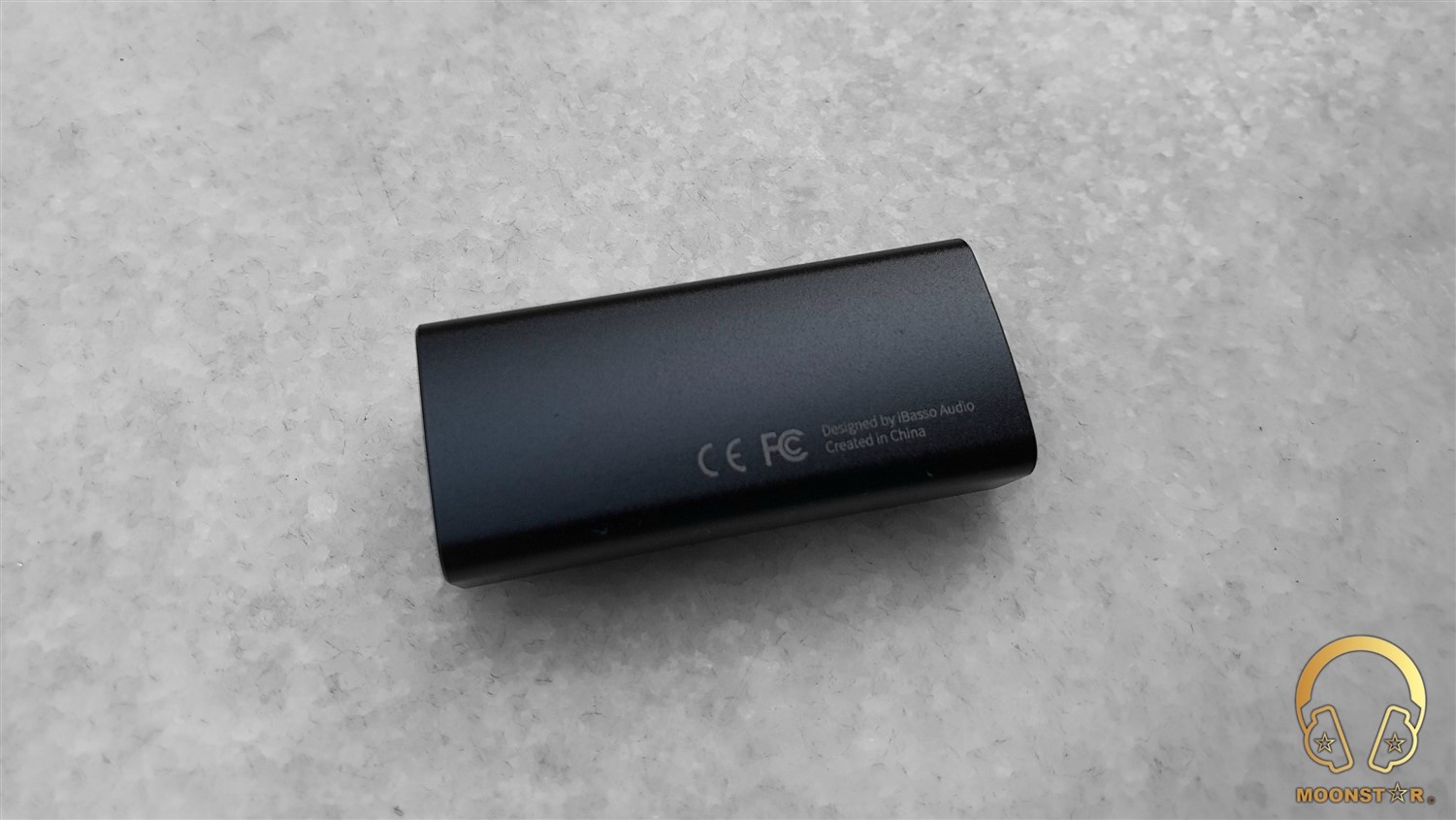 At the back side of the DC06 is the USB Type-C port in order to concet the device with a cable to the source. 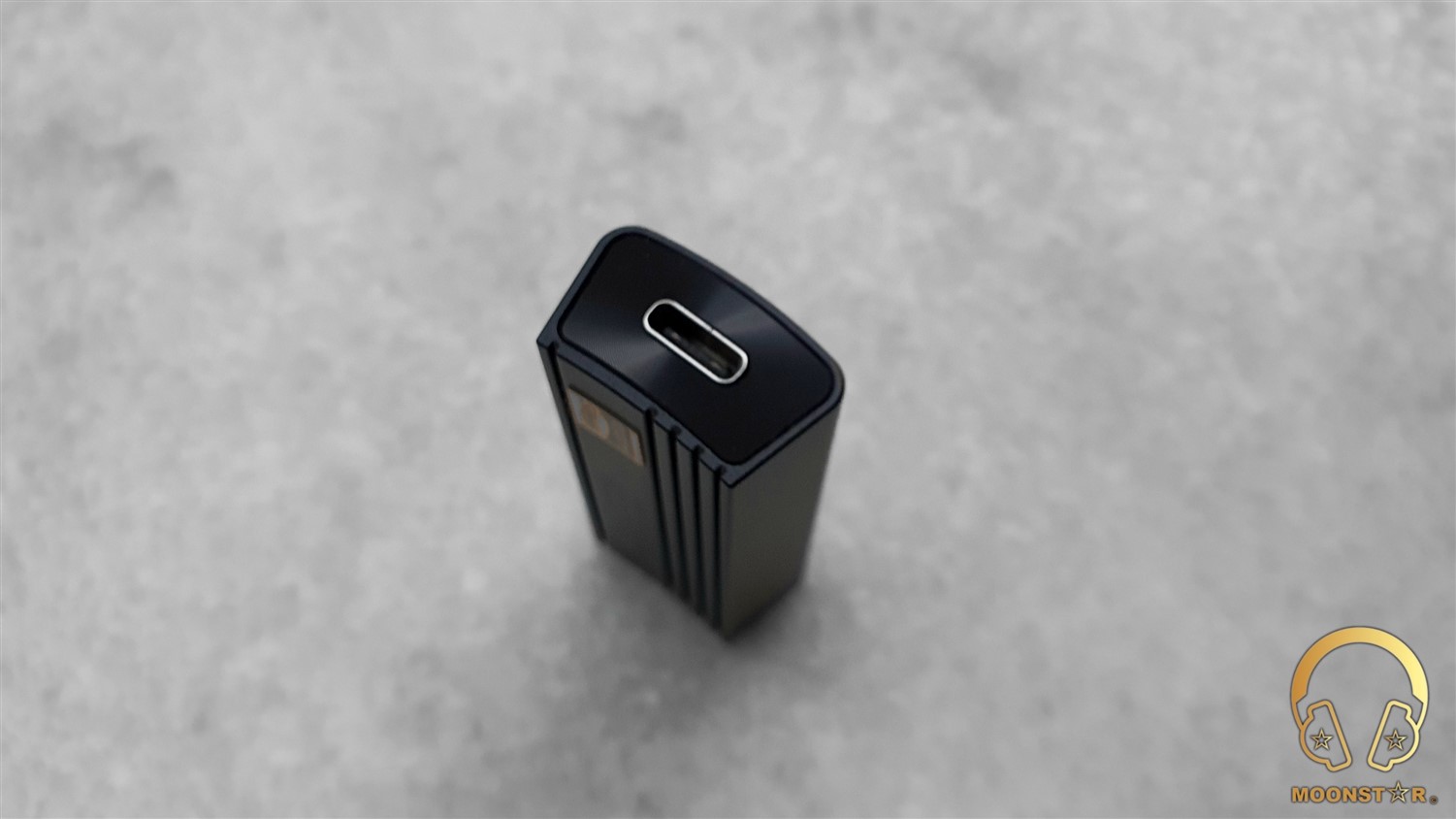 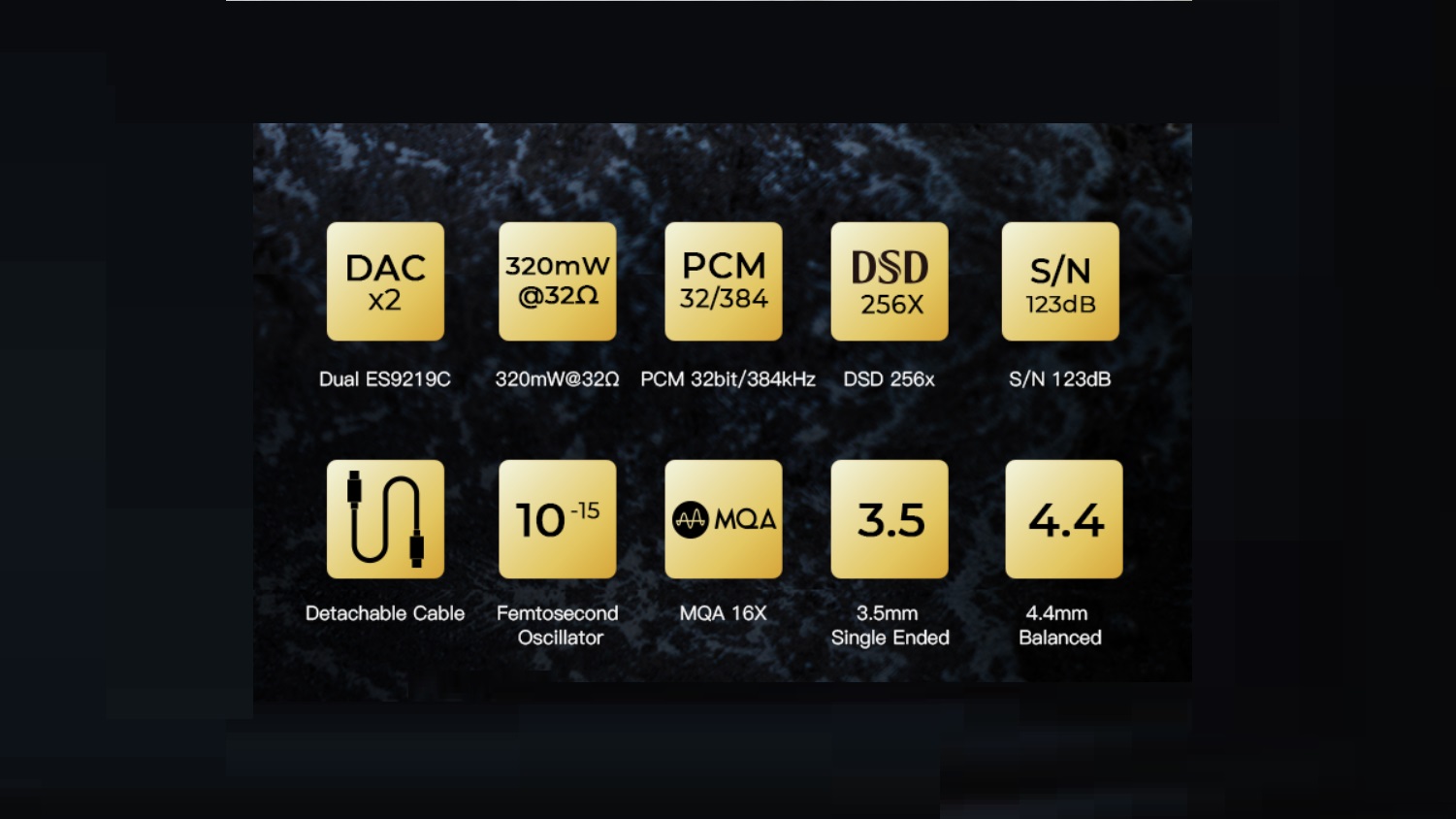 The iBsso DC06 is a powerful device especially for an small Portable USB DAC/Amplifier dongle that is able to produce up to 320mW @ 32ohm over the 4.4mm Balanced output. What also impressed me about the DC06 was its very dark background and silent noise floor.

The DC06 is equipped with an NDK femtosecond Oscillator in order to more effectively reduce phase noise and to provide a more accurate clock reference for the DAC. 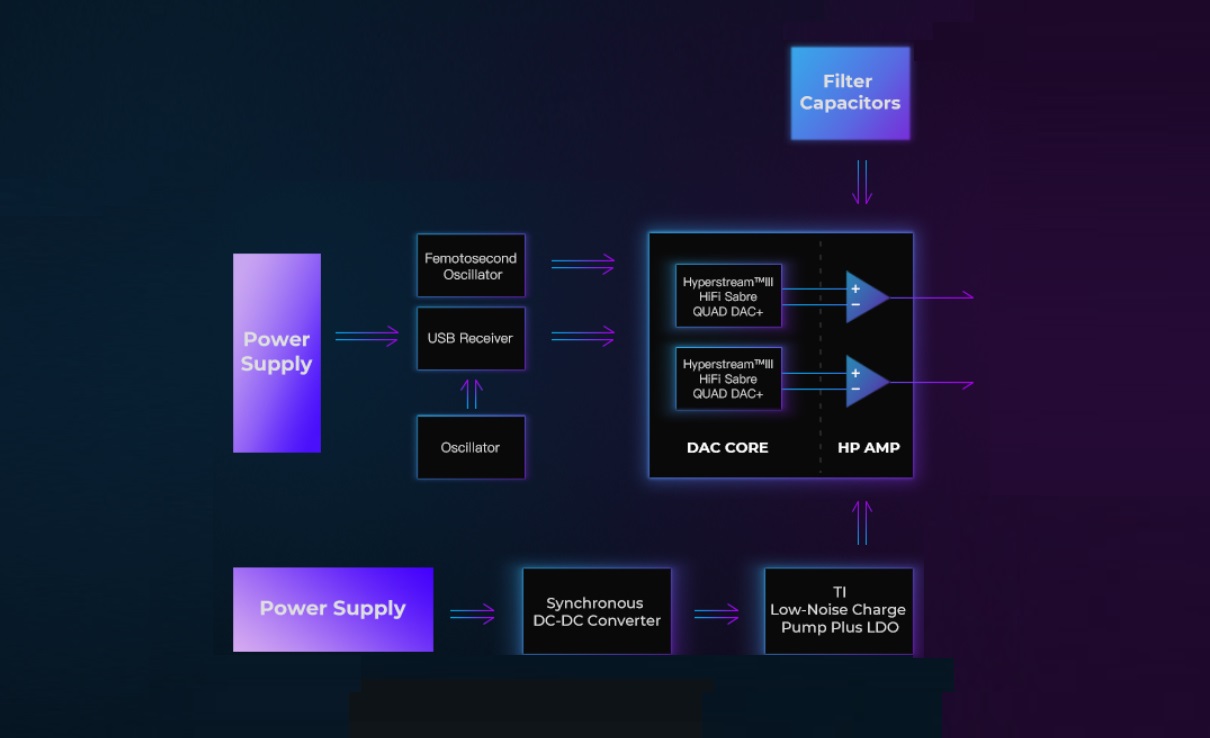 The iBasso DC06 uses a USB-C connector and utilizes the standard UAC2.0 USB receiver. It is compatible with most Android Smartphone’s (5.1 AND ABOVE) and tablets on the market and can also be connected to MAC and Windows PC’s via the supplied USB Type-C to USB-A converter, which allows it to work as a USB Soundcard. The DC06 supports also Apple iOS devices such like iPhone’s and iPad’s. However, in order to use it with Apple iOS devices you do need a USB-Type-C to Lightning cable that you have to chose while ordering the device.

The iBasso DC06 uses a standard UAC 2.0 sound card chipset for plug-and-play on Mac and Win10 computers. For WinXP, Win7, and Win8 systems please download the driver from the link below; 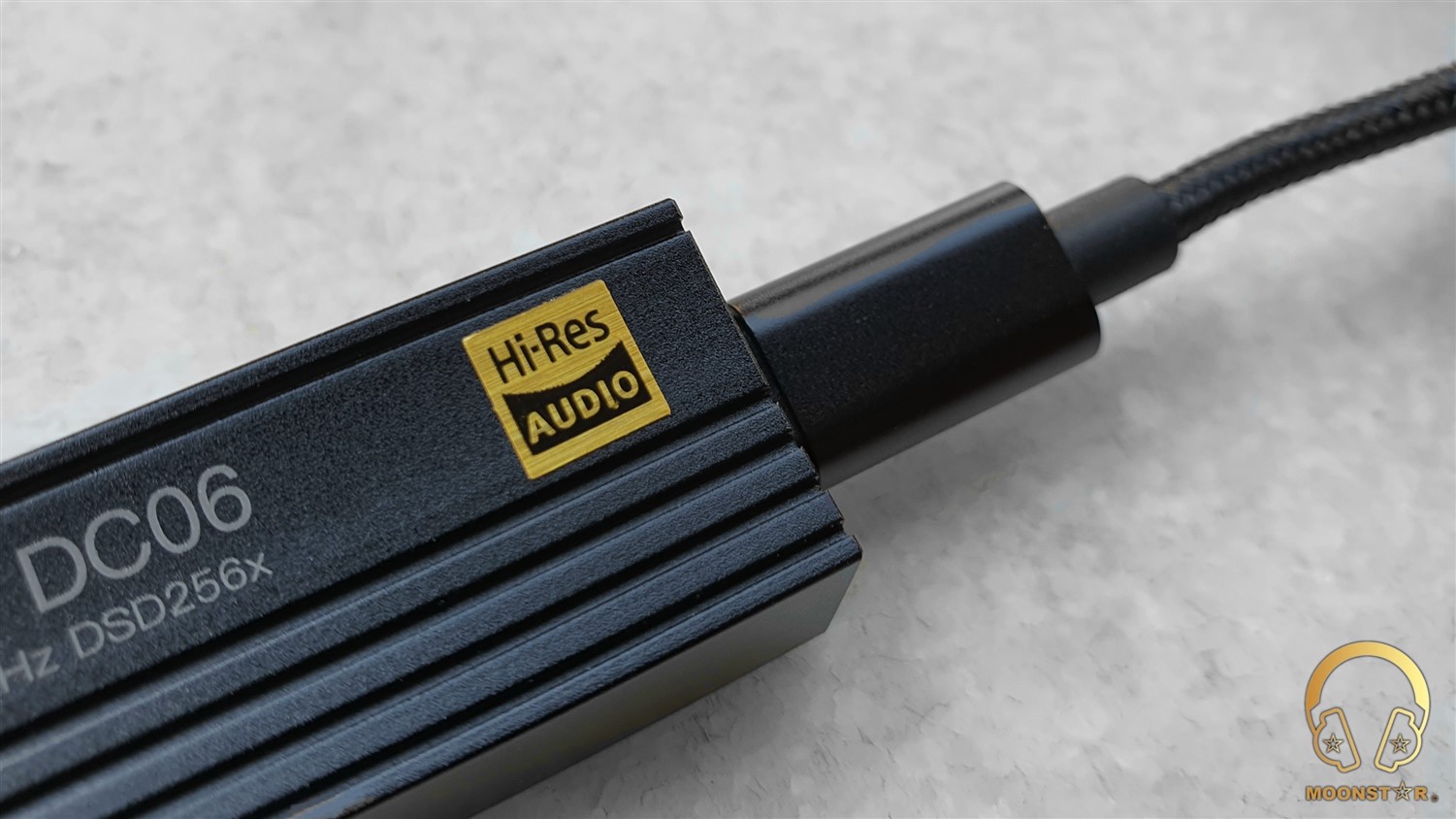 iBasso developed a UAC2.0 volume controller APP to achieve 64 – step hardware volume control, in order to effectively reducing the noise floor. Windows 10 & Android 5.0 and above supports the UAC2.0 protocol by default. However, due to compatibility reasons, Android Smartphone manufacturers still use SRC on audio output. When DC06 is connected, the maximum volume is achieved by default, while the software algorithm of the device is used to reduce the volume. The software algorithm can reduce the volume but cannot reduce the noise floor. 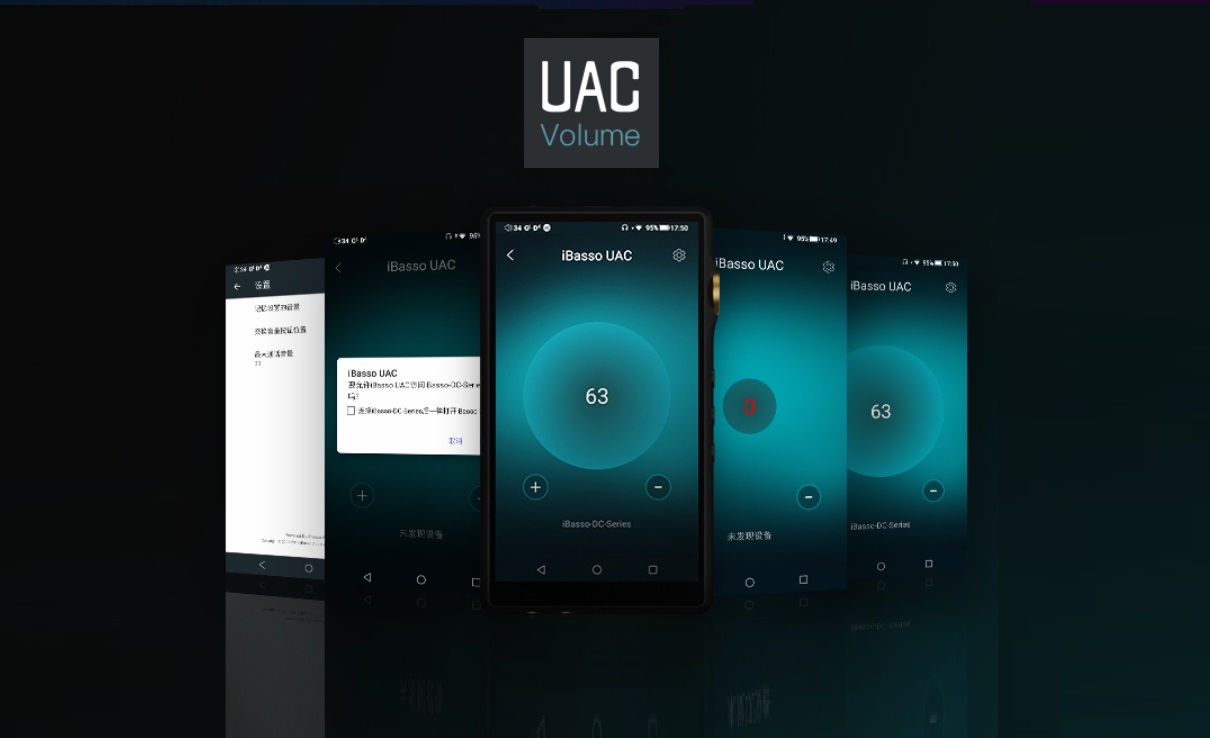 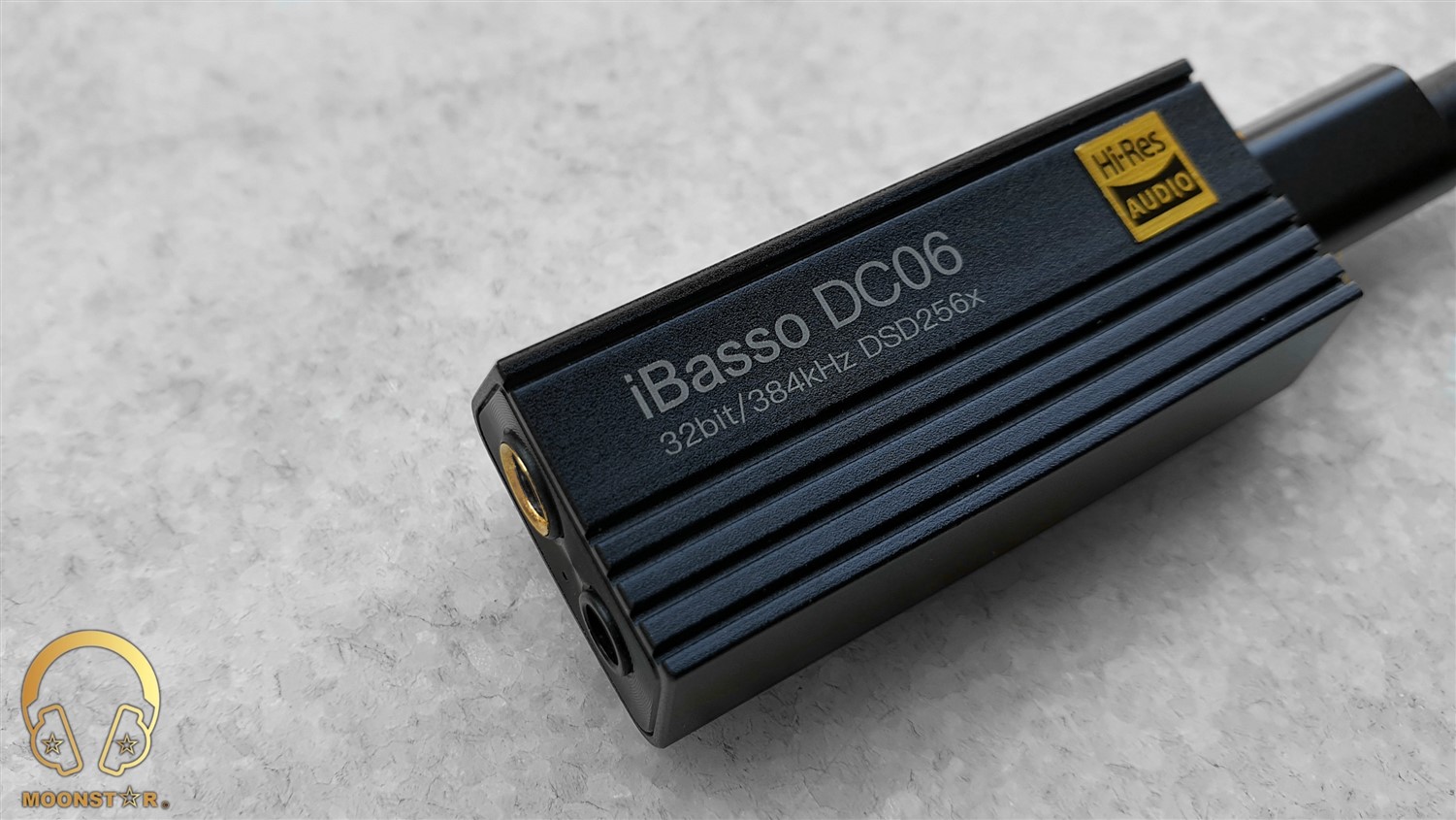 The iBasso DC06 is a USB DAC/Amplifier source that offers a pretty uncolored and linear sound profile, while a slightly amount of warmness adds the overall presentation an efficient sense of musicality. The general sound character of the DC06 can be described as clean, fairly musical and balanced.

The iBasso DC06 review was been written after a burn-in period of about 80 hours. I have paired the device with sources like the Samsung Galaxy Note10 Plus (with UAC 2.0 Application) & the Asus TUF FX505DU PC. My sound impressions below are mainly based on my experiences with IEM’s like the iBasso IT07, Meze Audio ADVAR and 7HZ Eternal. 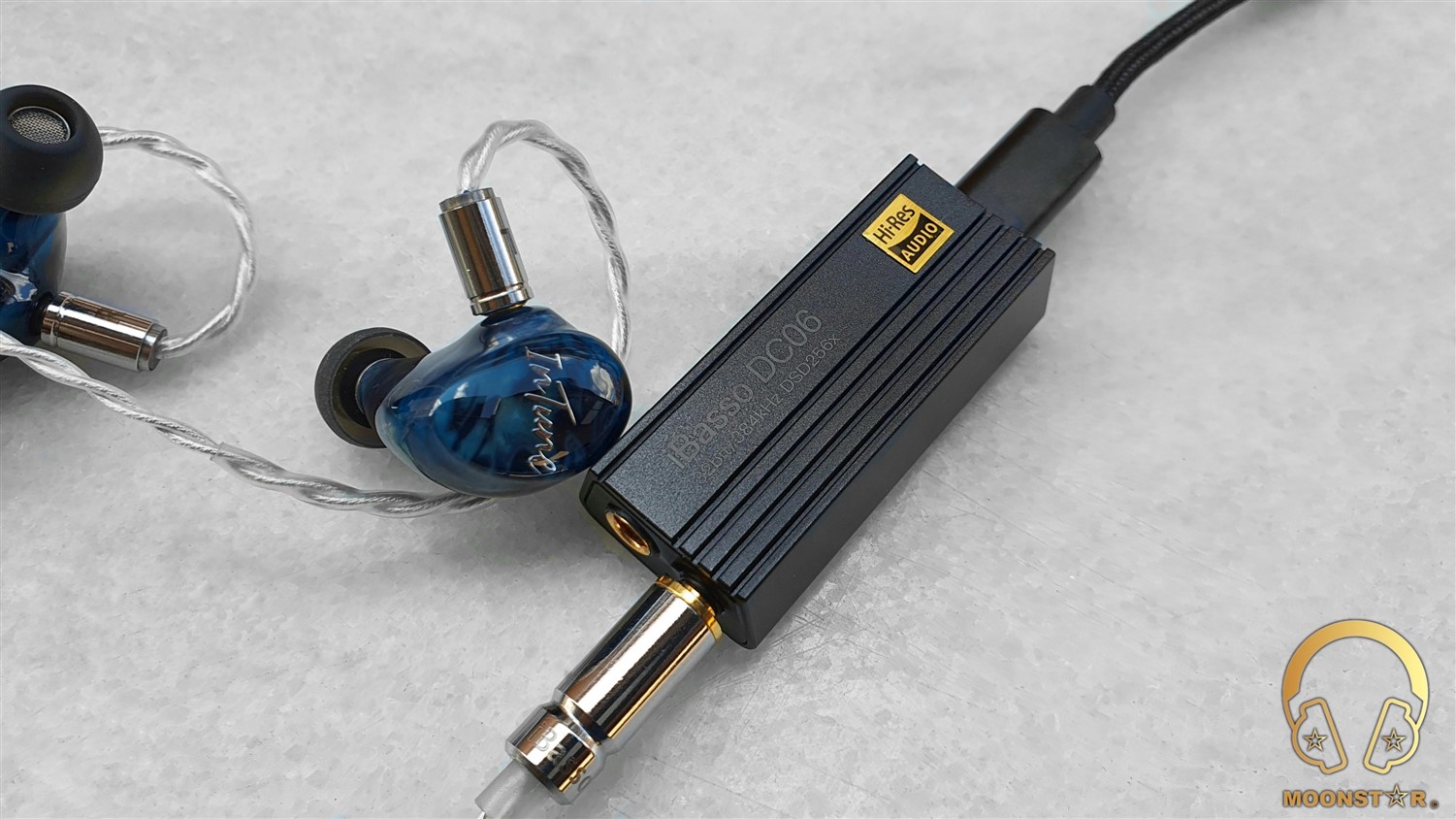 The iBasso DC06 is a big step forward in terms of sounds performance when compared with older models such like the DC01 and DC02 that didn’t sound that natural, mature and detailed.

The iBasso DC06 has a pretty neutral and relative smooth subbass character that that shows a decent sense of depth and emphasis, when I do listen songs like such like “Massive Attack’s “Angel” and “Portishead’s “It Could Be Sweet” especially when paired with IEM’s like the Meze Audio ADVAR and 7HZ Eternal.

The midbass region on the other hand is shown with a good grade of authority and transparency. Instruments from cross drums to trumpets, from electro guitars to cellos are presented with good level of body, control and resolution, especially when paired with the IT07 and ADVAR. The separation and detail retrieval of drums and or a contrabass is decent while the sense of layering is on an efficient grade for a portable USB DAC/AMP at this price category. 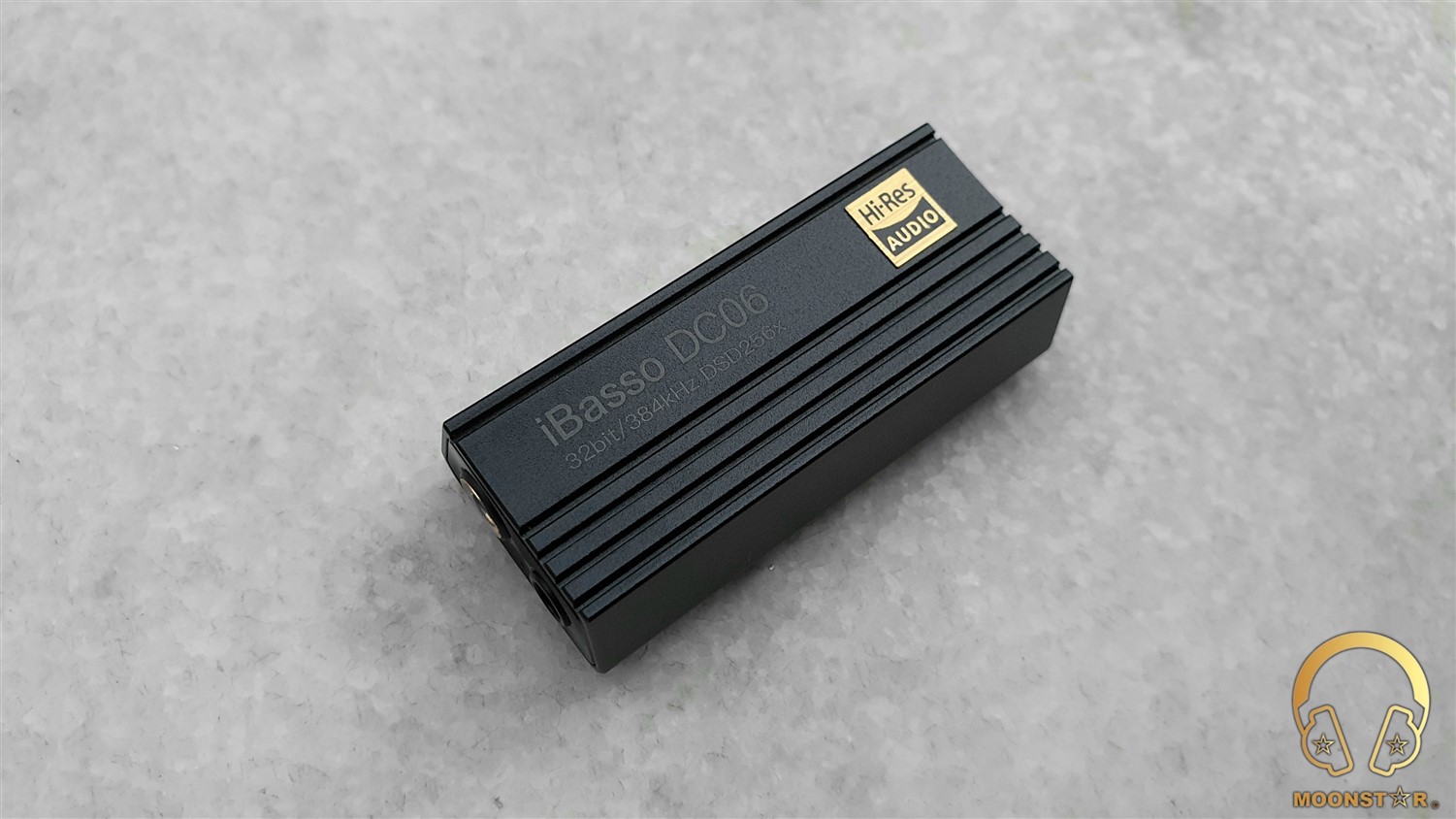 The midrange of the iBasso DC06 has a pretty transparency and airy atmosphere that creates good conditions while listen songs with lots of instruments for example in genres like classical, jazz, etc. The general tonality of this area is a bit warmer than neutral that avoids a dry or to sterile presentation in this area. The lower midrange shows a moderate sense of body and depth, while listen to strings and pianos or to male vocals such like Barry White or Isaac Hayes.

The upper midrange has a matured character that sound quite energetic yet controlled, especially compared to older models such like the DC01 and DC02 that did sound a bit unnatural and bright in this area. Female voices such like Adel, Edith Piaf and Aretha Franklin are reproduced in a quite lively, emotional and detailed manner when paired with IEM’s like the iBasso IT07 and Meze Audio ADVAR. Instruments on the other do sound fairly natural and realistic, which is a remarkable highlight of this region. 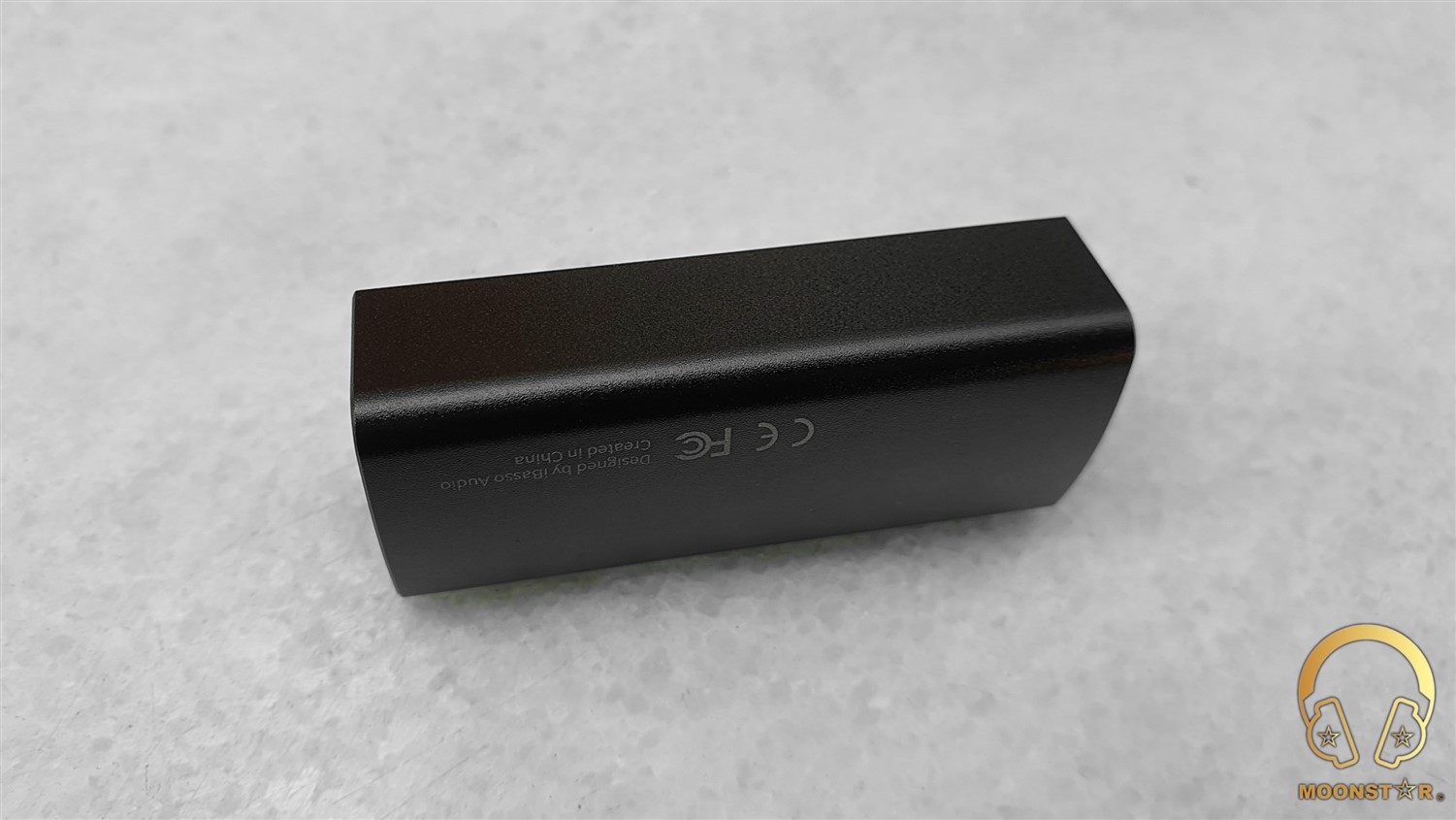 The treble range of the iBasso DC06 is mildly bright and pretty detailed, while the grade of control is decent in moments when soprano voices such like Sertap Erener and instuments are played with high level of distortion. The lower treble region is able to produce a good level of clarity and offers also an efficient sense of definition when I do listen to instruments such like pianos, organs or acoustic guitars.

The upper treble region on the other hand shows a decent grade of airiness and sparkle, especially when paired with the iBasso IT07 and Meze Audio ADVAR. The treble range of the DC06 offers in general a pretty good level of brightness and resolution, which is free of unwanted sharpness and over saturation. Instruments such as hi-hats are slightly in the background but are shown with relative distinctive hits, while crash cymbals are reproduced with a successful grade of authority and extension. 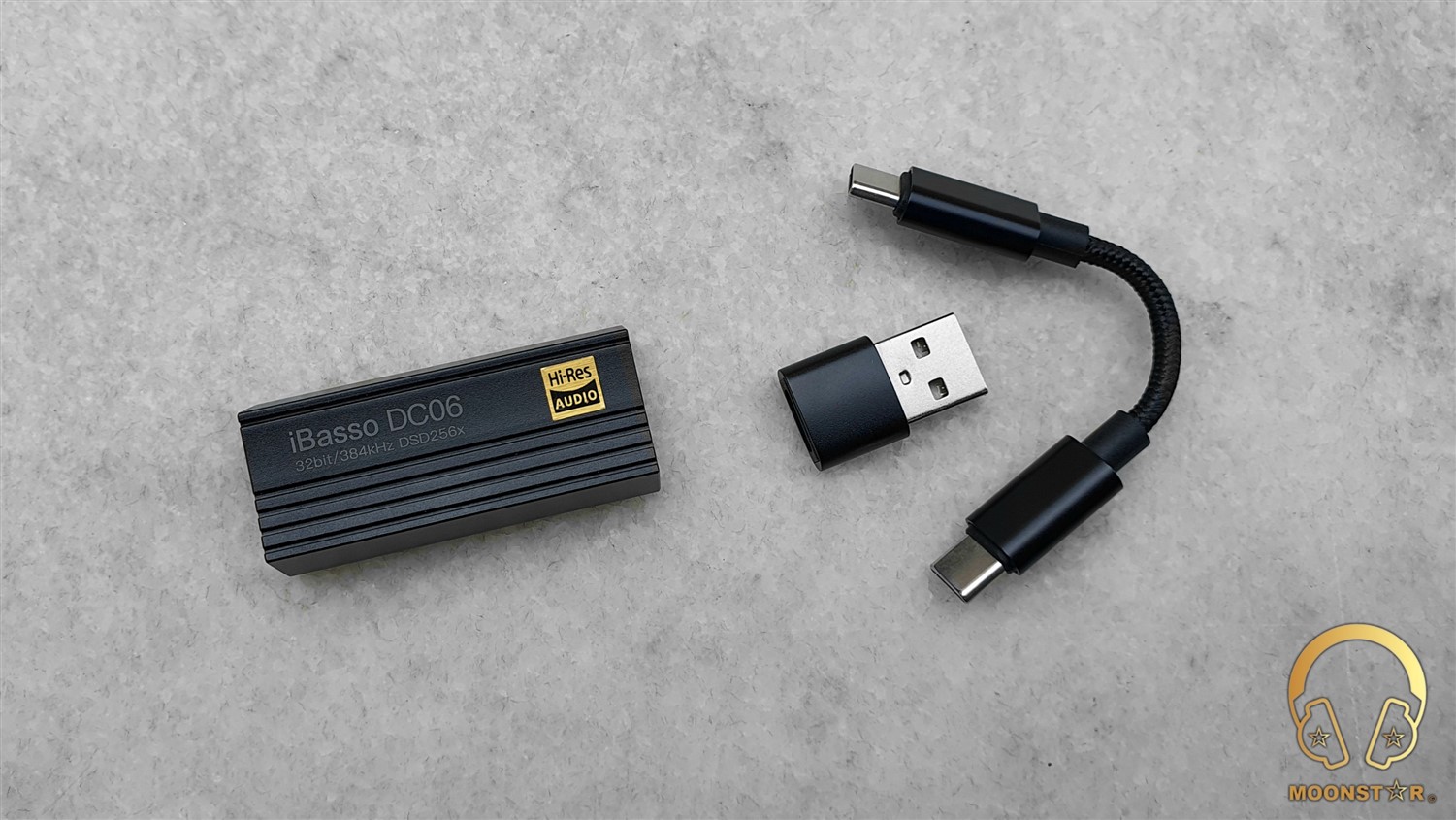 When it comes to the soundstage of the DC06, I can say that it offers a quite spacious and airy atmosphere with good sense of wideness and depth, while the height is on a moderate level. The separation and placement of instruments and vocals is decent when paired with IEM’s like the Meze Audio ADVAR or iBasso IT07.

The HiBy FC4 has a warmer tonality and fuller overall presentation compared to the iBasso DC06, which shows a closer to natural tonality and overall frequency response. Both devices are successful in terms of subbass depth and extension, however the DC06 sounds more linear and has less colouration in this area when paired with IEM’s like then 7HZ Eternal and Meze Audio ADVAR. When it comes to the midbass response, I can say that the HiBy FC4 has the slightly edge in terms of body and impact, while the DC06 is superior regarding the transparency and resolution produced in this area. 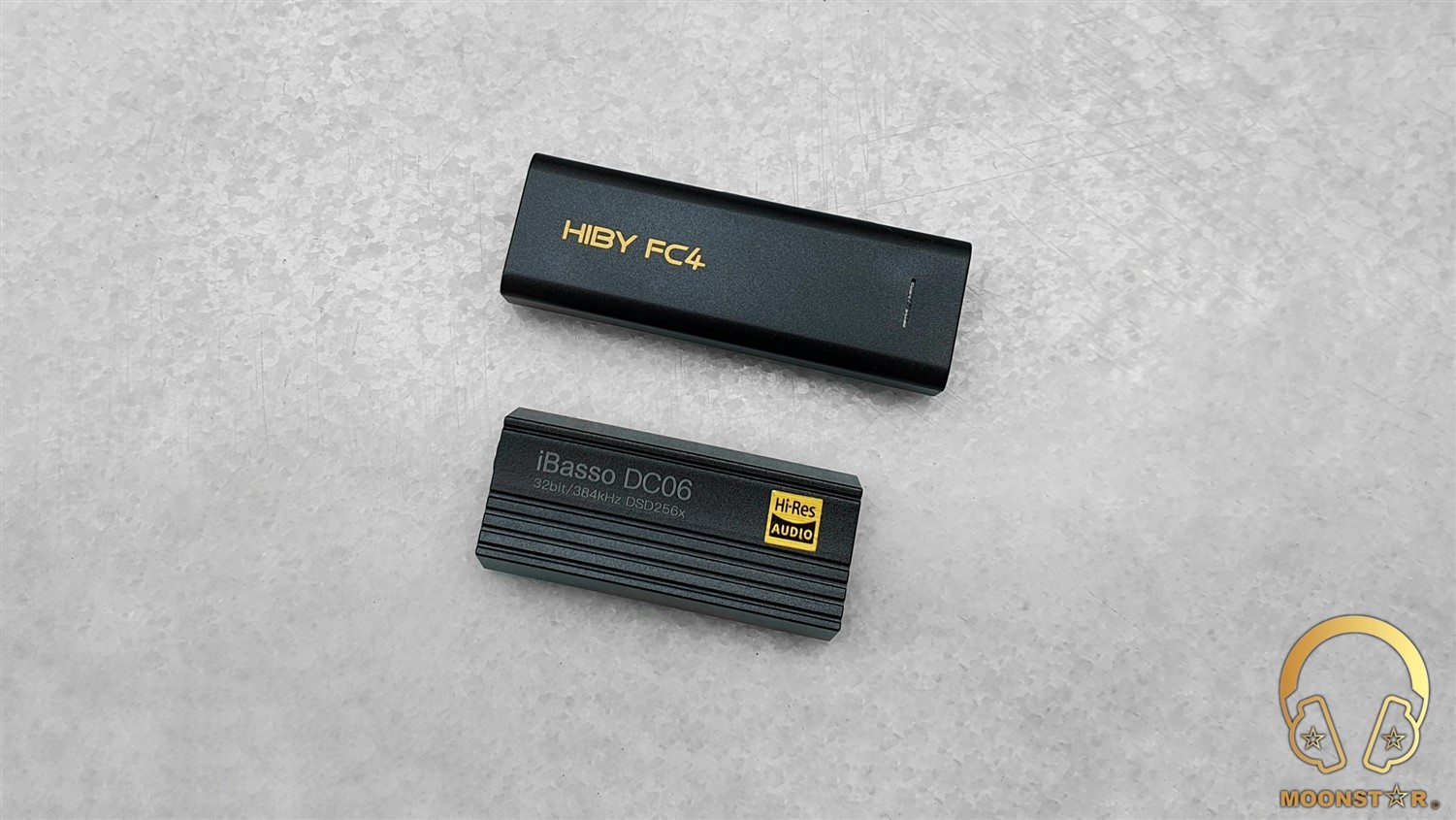 The HiBy FC4 is the source with the warmer midrange tonality that shows also in general a fuller and more saturated character in this area. The iBasso DC06 on the other side shows a closer to neutral tonality with higher sense of transparency and spaciousness. The lower midrange of the FC4 has more intensity when I do listen to male vocals and instruments such like an acoustic guitar or trumpet, while the DC04 offers s slightly better sense of clarity and resolution in this area. The upper midrange of both the DC06 and FC4 shows a good level of intensity and sounds also pretty controlled without to show any remarkable sibilance or harshness. The main difference is that the DC06 has edge when it comes to the grade of clarity and micro detail retrieval. 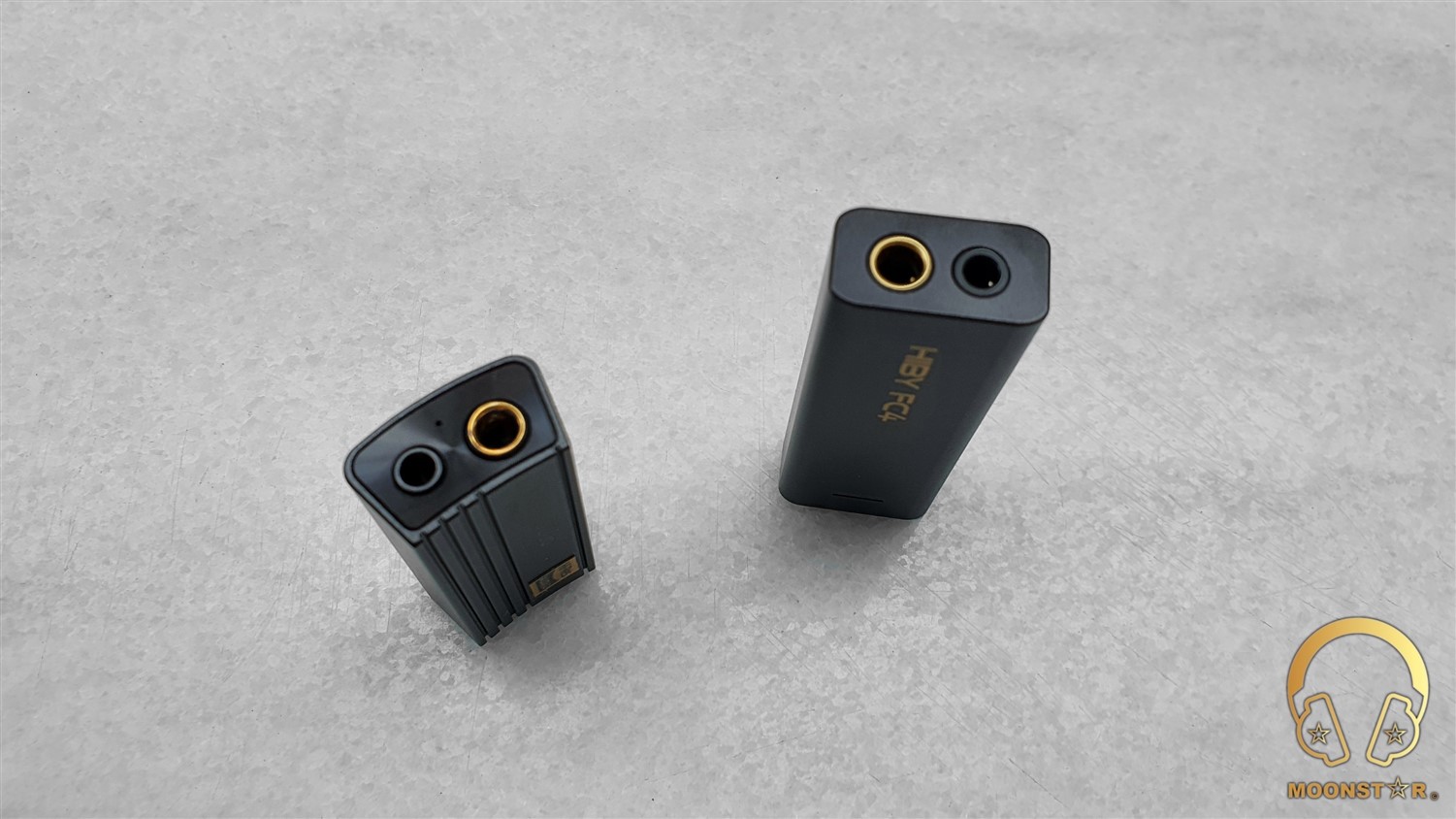 The treble range of the iBasso DC06 has a slightly brighter character and offers also a higher level of dynamism and extension that was quite audible when paired with IEM’s such like the iBasso IT07 and Meze Audio ADVAR. The lower treble region of the HiBy FC4 sounds a bit smoother and controlled, while the iBasso DC06 has the upper hand in terms of clarity and definition. The upper treble region of the DC06 creates slightly more air and sparkle for tenor and soprano voices while both devices are pretty close when it comes to the separation and resolution when I do listen to woodwinds and percussions. 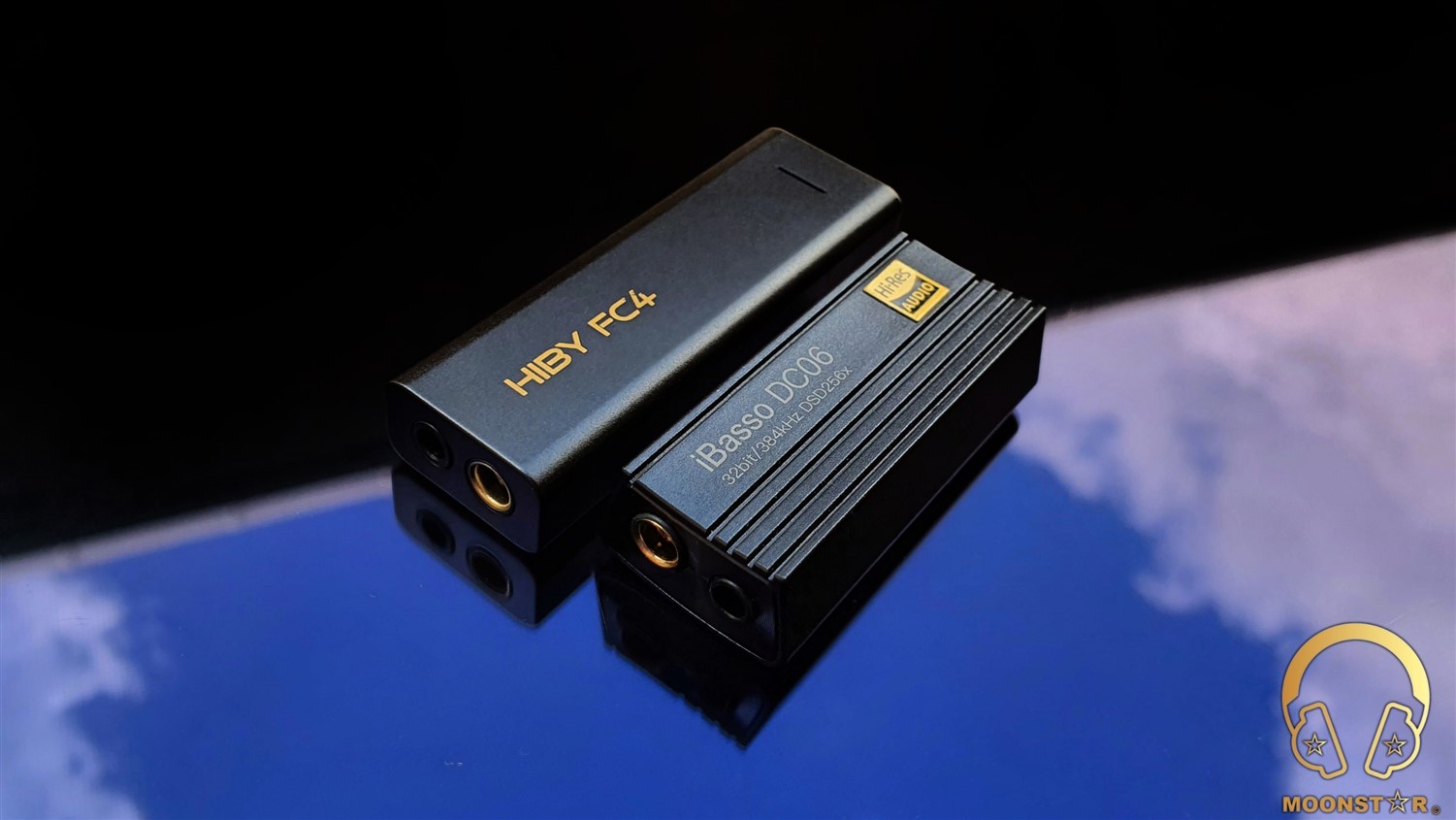 The soundstage of both devices sounds quite airy and spacious and offers fairly precise positioning and separation of instruments and vocals. The main difference is that the iBasso DC06 shows a slightly better level of wideness, while the sense of depth and height of the stage is relative similar.

The DC06 is a big step forward compared to the first generation of USB DAC/Amplifier dongles that the company released in the last three years, which was a must have in a market flooded with tons of devices, especially in 2022. In summary; the iBasso DC06 is powerful DAC/Amplifier with a solid appearance, which offers a clean, natural and fairly musical overall sound presentation, over both the 3.5mm SE and its 4.4mm Balanced outputs that supports Native DSD up to DSD256 and 16x MQA rendering, which is offered for a pretty reasonable price.