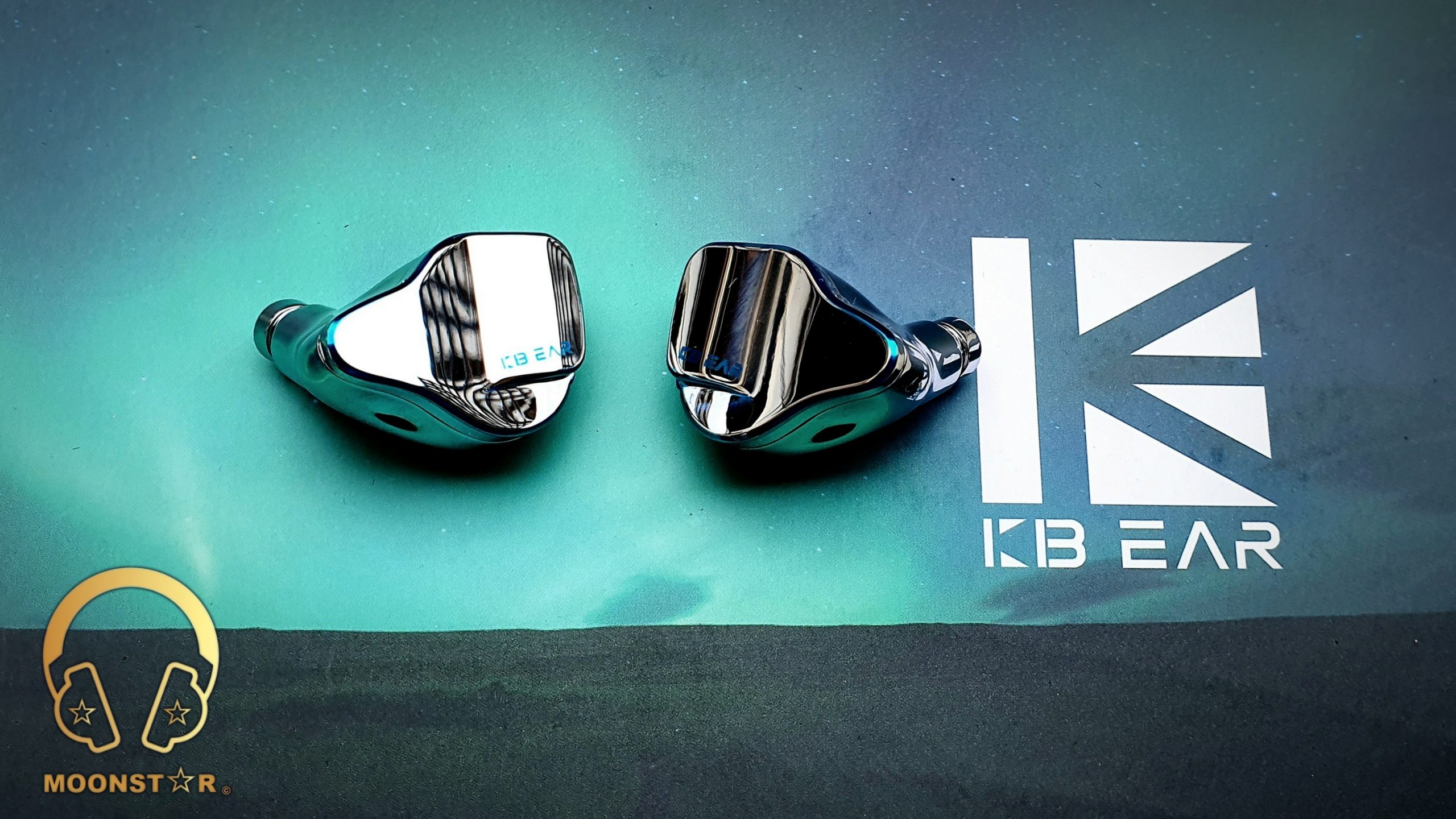 KBEAR is an earphone brand of the Chinese company Shenzhen Lingyin Technology Co., Ltd that was founded in 2014 by a young team of audiophiles.

The KBEAR Aurora is the latest Single Dynamic Driver IEM with a 10mm diameter Titanium Dome Diaphragm. This Dynamic Driver is located inside a Monitor shell made of Aluminum Alloy with a special vacuum plating process, which is equipped with a 0.78mm diameter 2-Pin connector.

I would like to thank KBEAR for providing me the Aurora sample for review purposes. I am not affiliated with KBEAR beyond this review and these words reflect my true and unaltered opinions about the product.

The actual MSRP price for the KBEAR Aurora is $169,00 USD. KBEAR offers also three different cable bundle options. More details can be found under the link below;

The KBEAR Aurora came in a rectangular white box with the KBEAR and product related details on the surface, mainly in blue color. 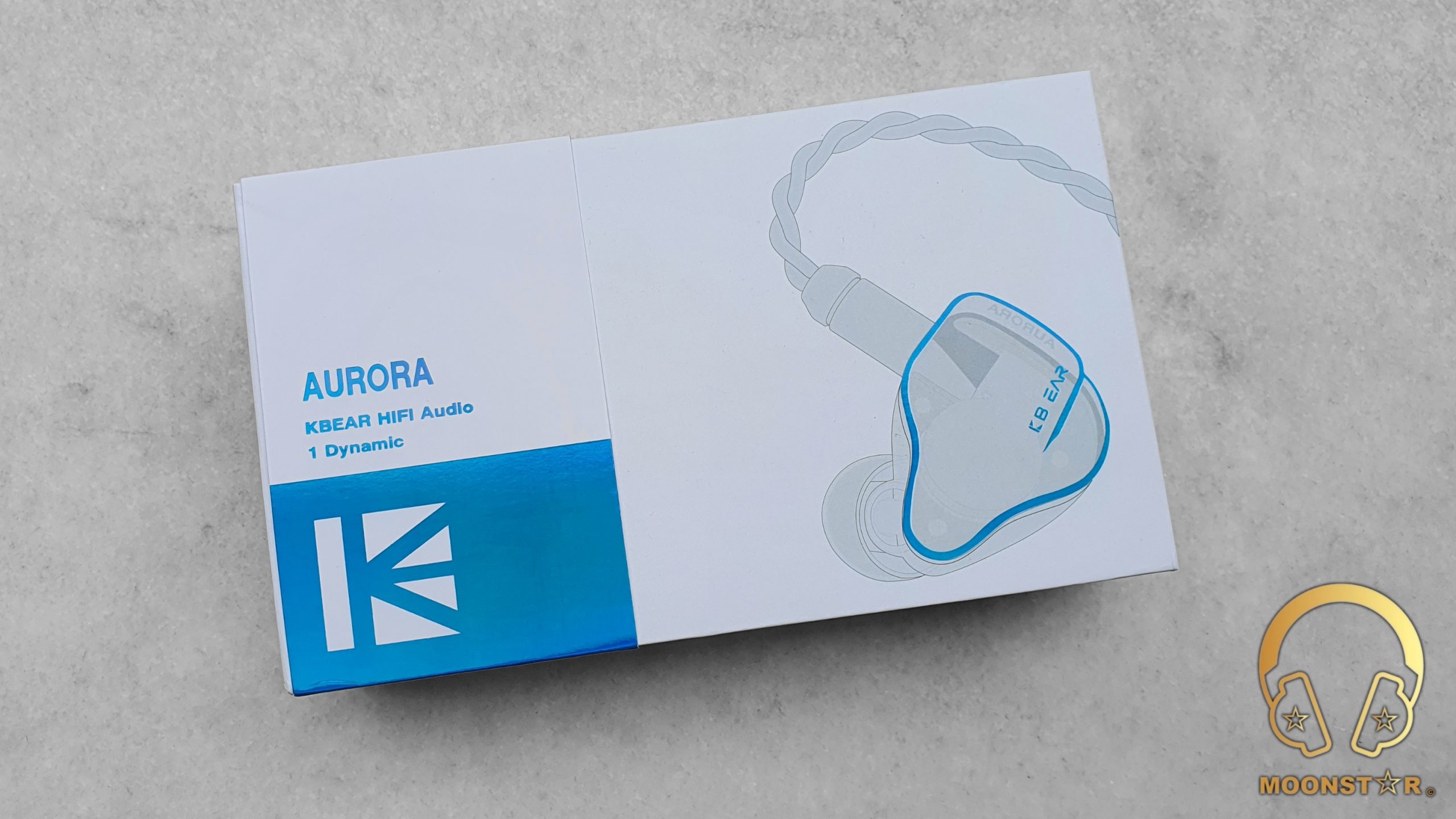 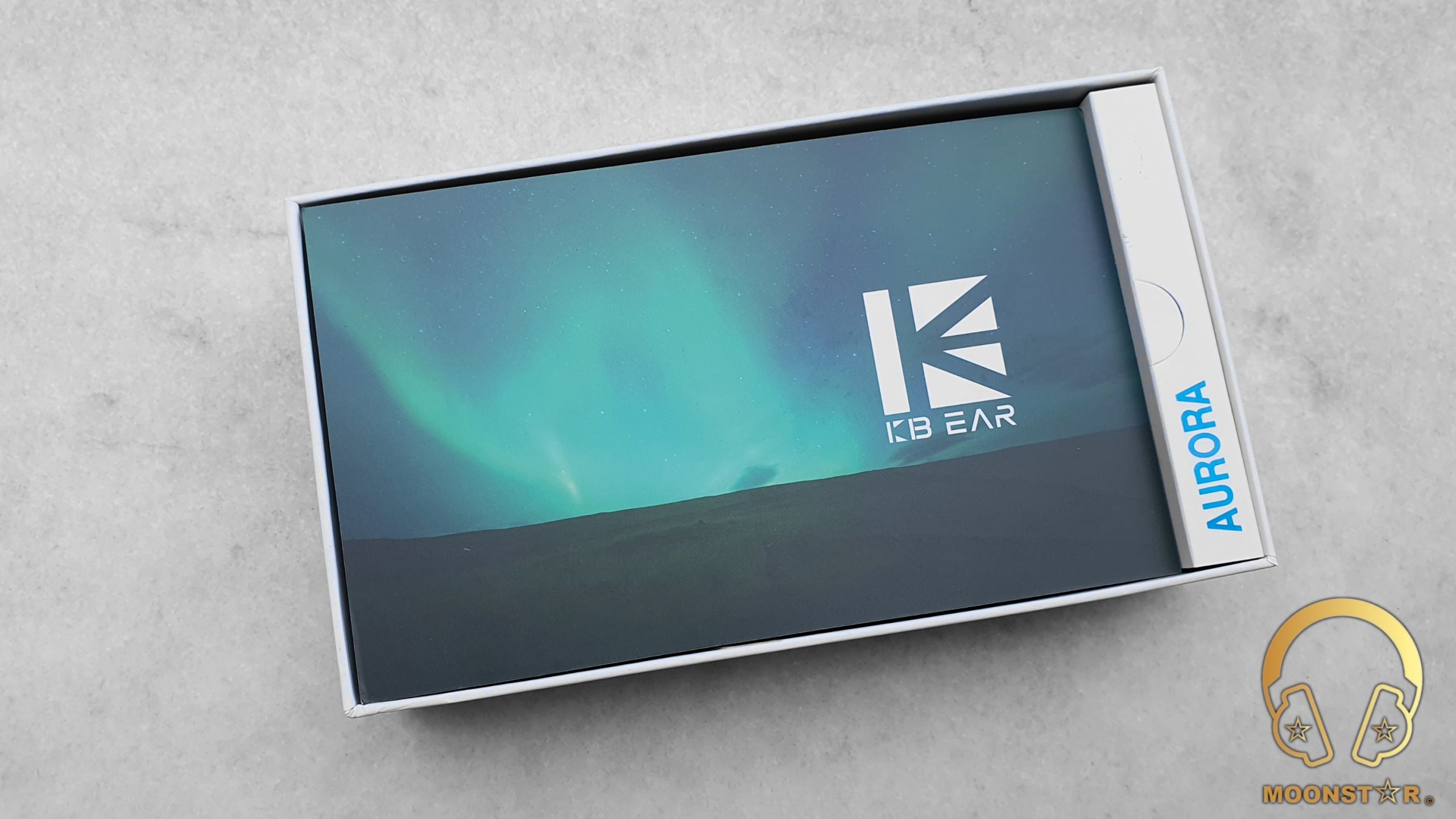 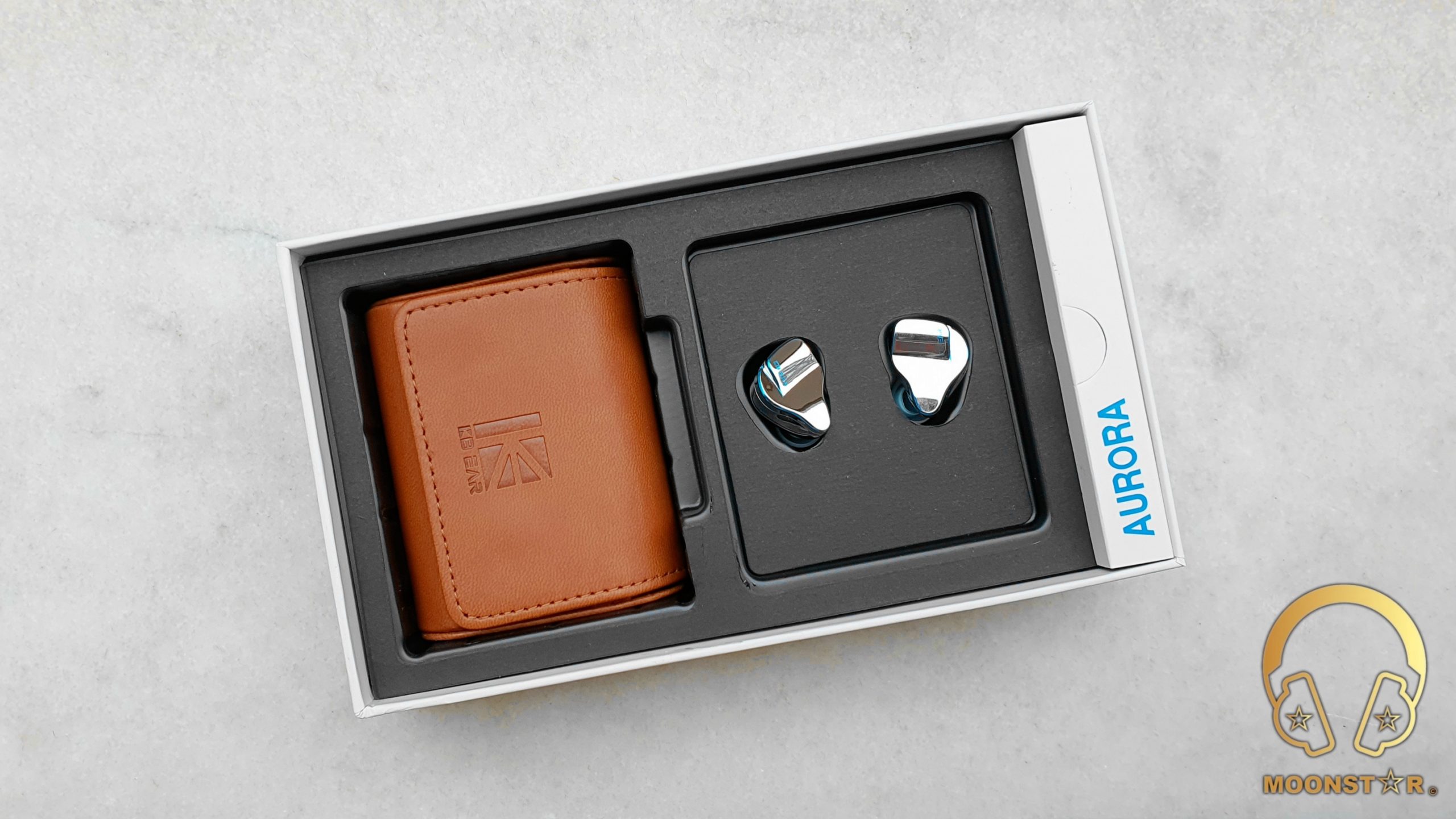 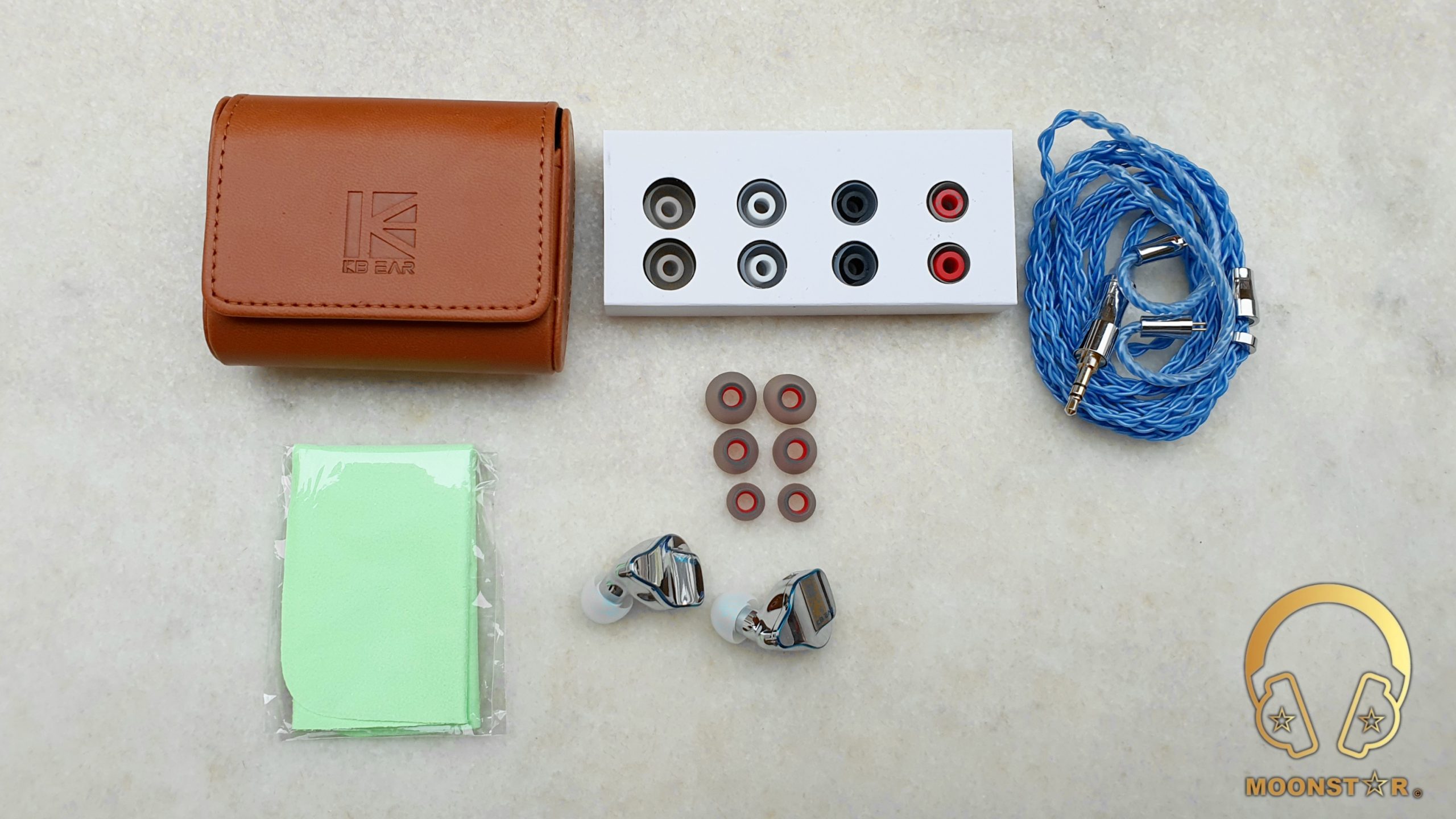 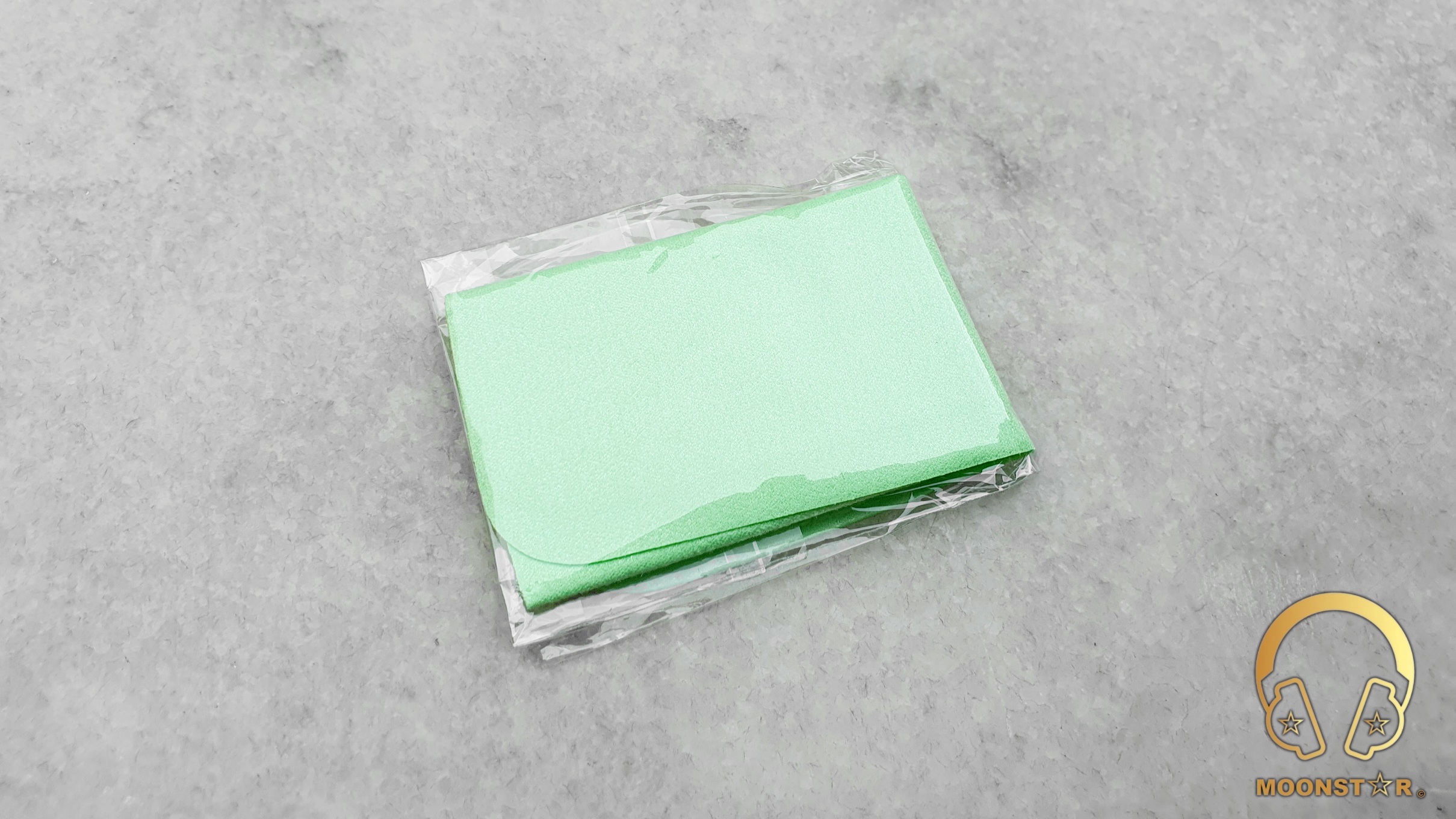 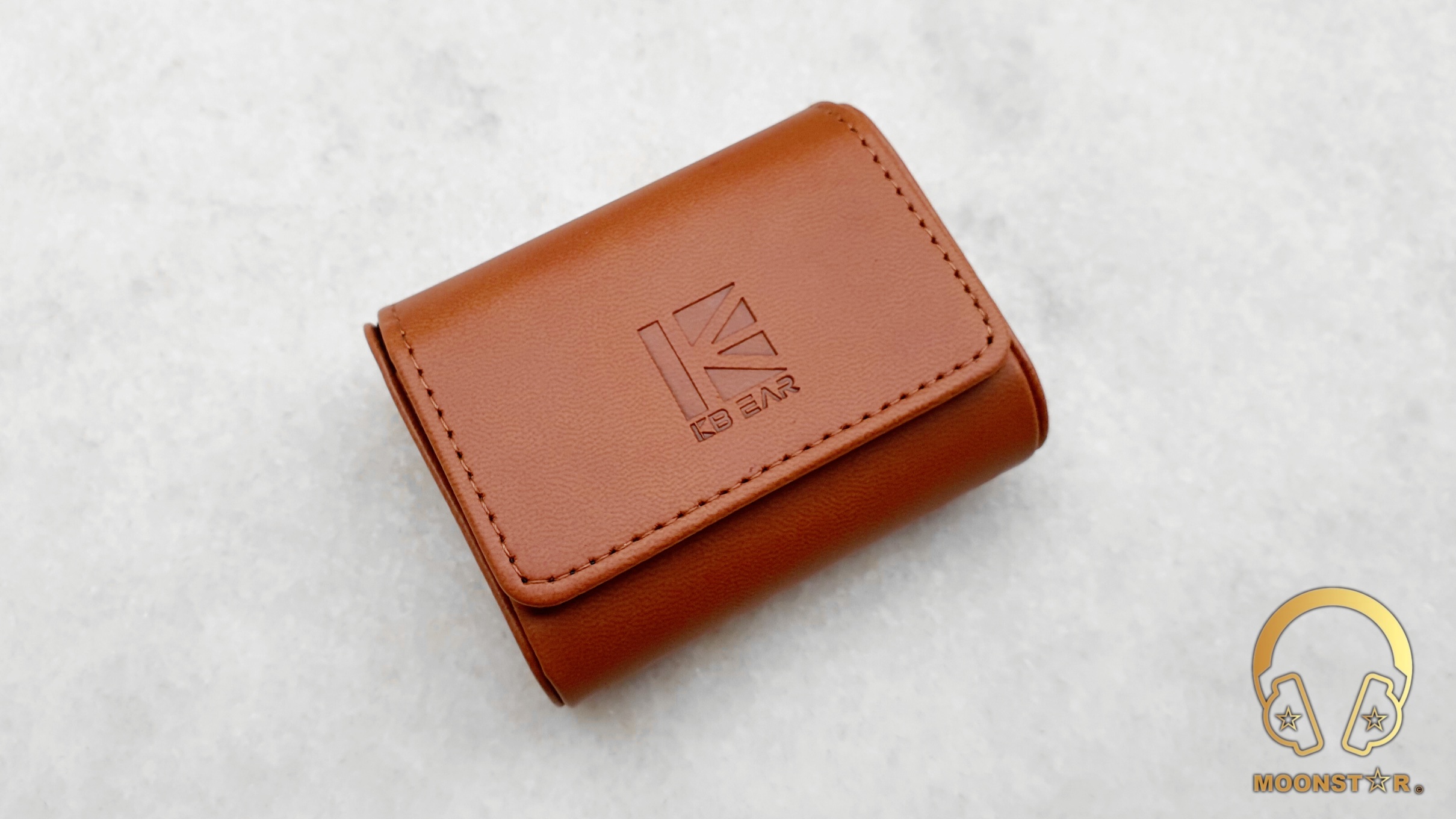 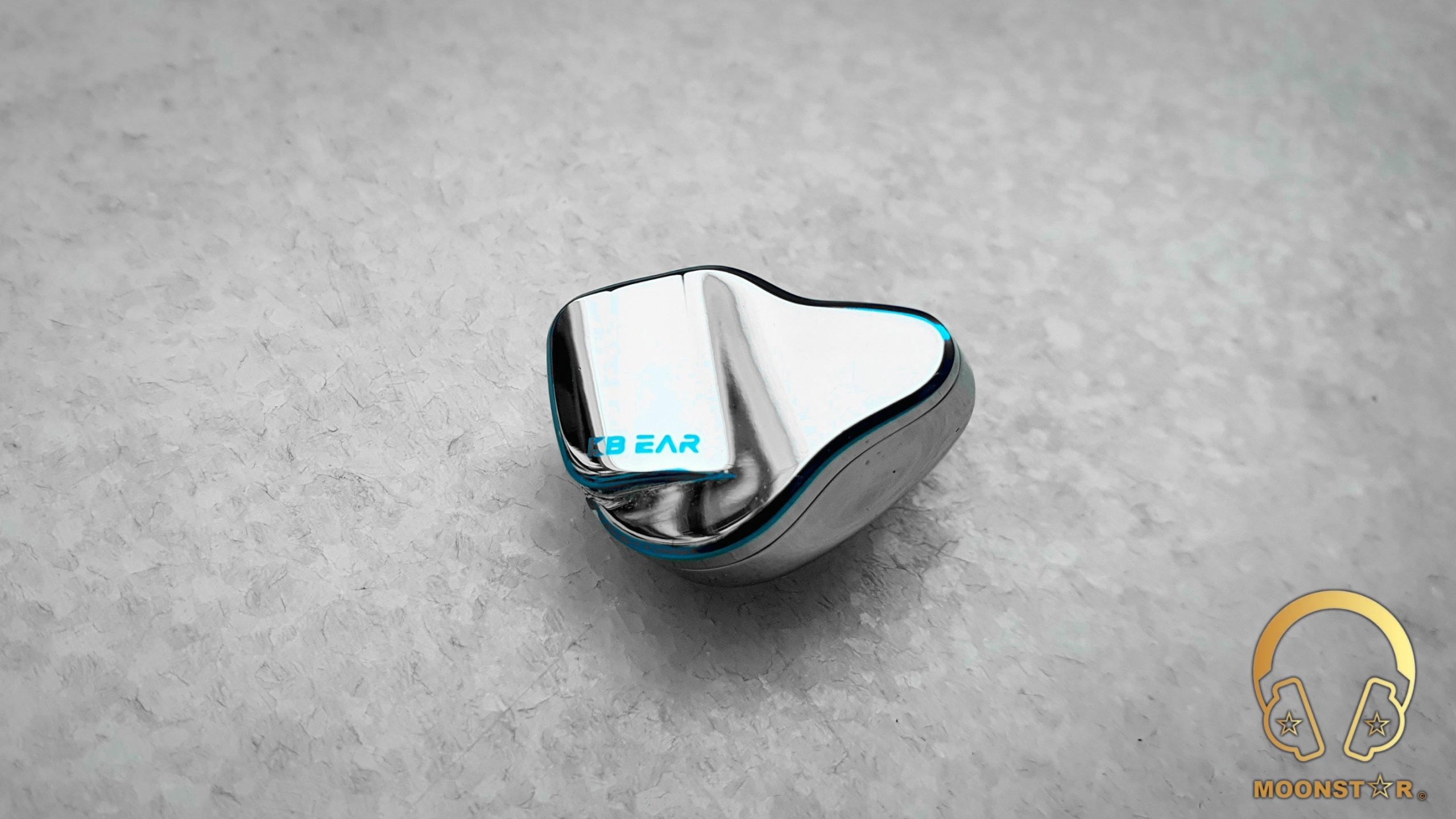 On the top of the main body are 0.78mm diameter 2-Pin connector and a small pressure vent. 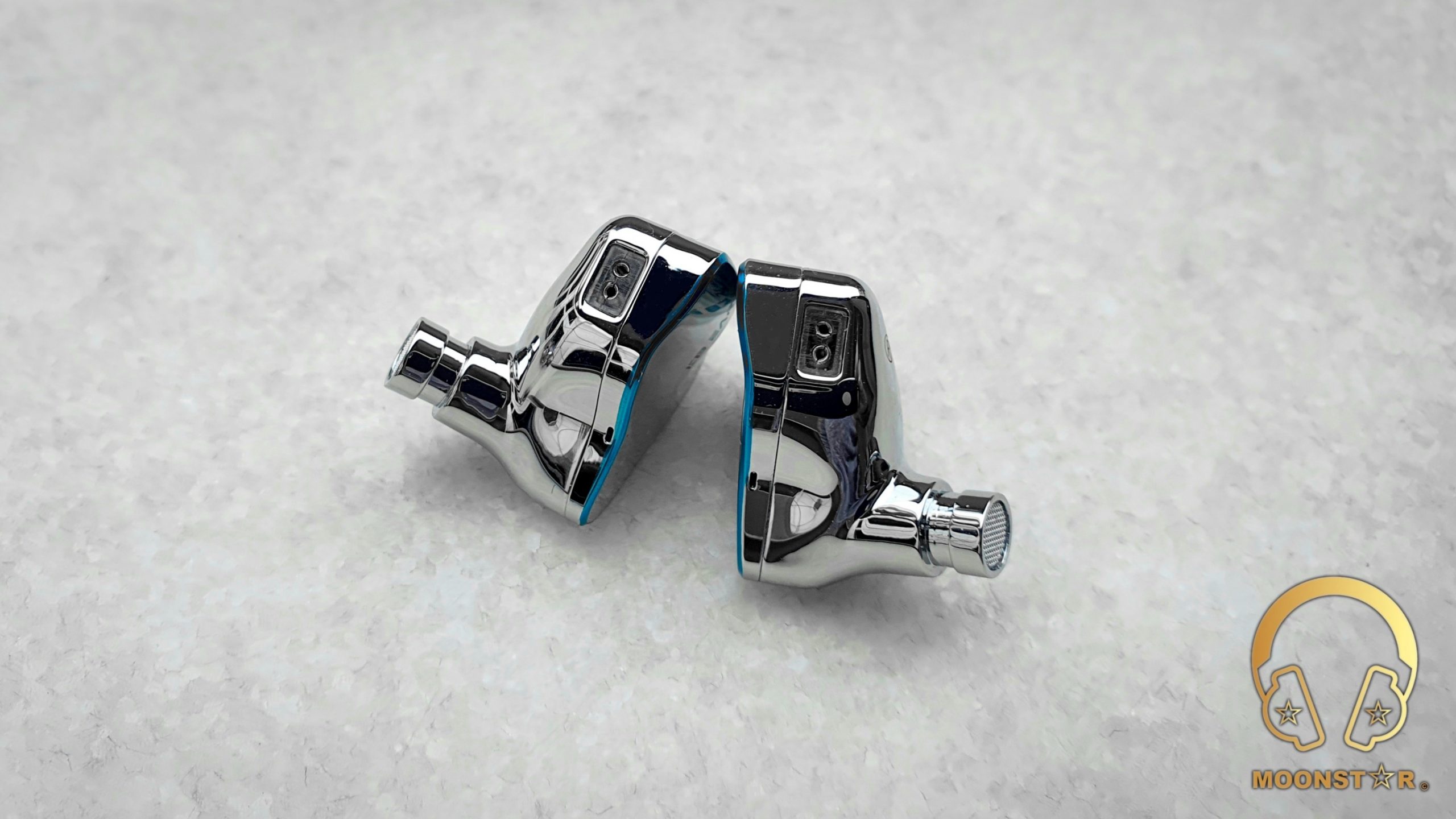 At the inner surface are the nozzle, Left or Right markings and a second opening for the 10mm diameter Dynamic Driver unit. The sound nozzle has mesh on the top to prevent the insertion of small particles such like dirt or ear wax. 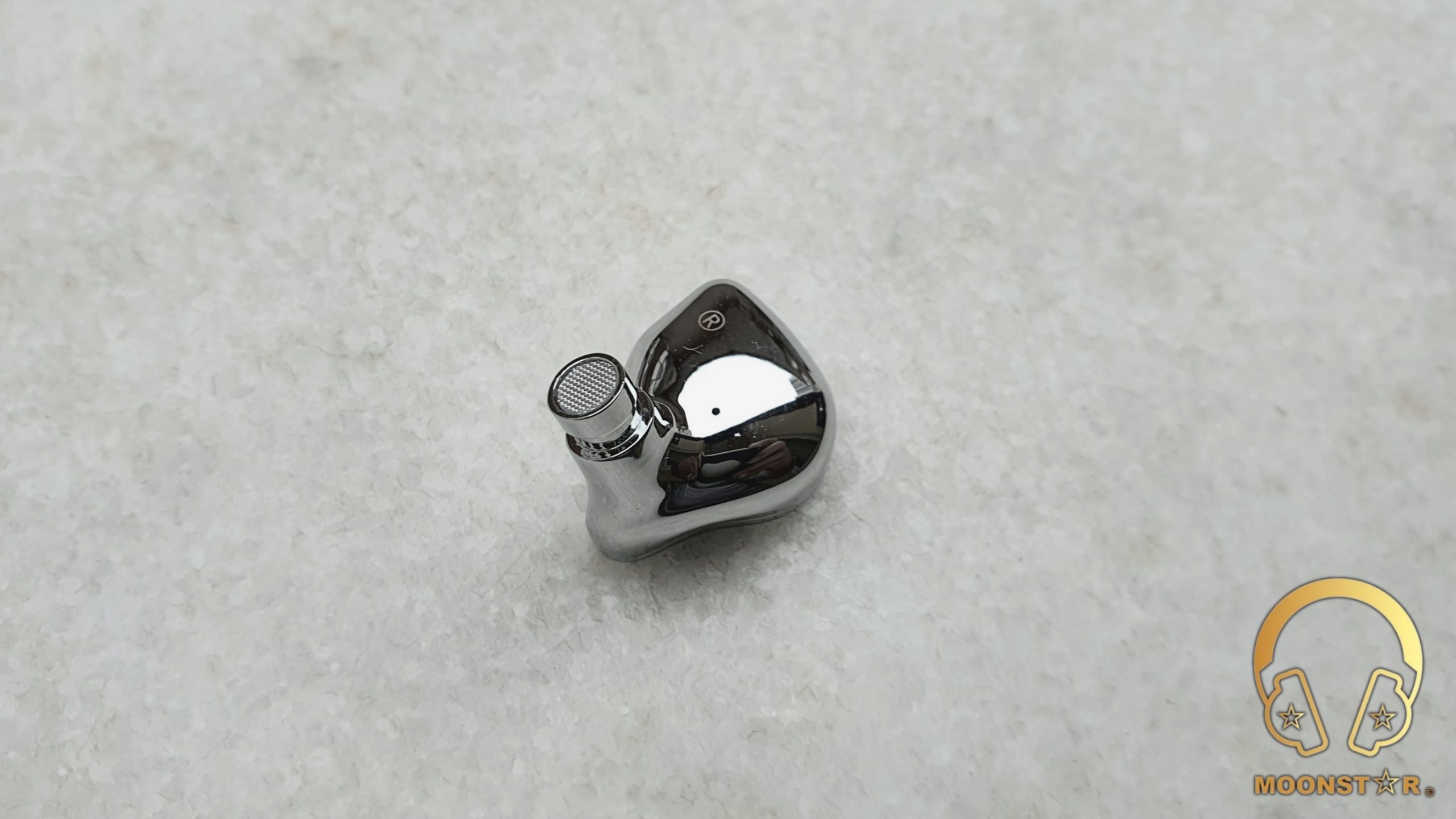 On the rear surface is the Aurora branding in the same blue color. 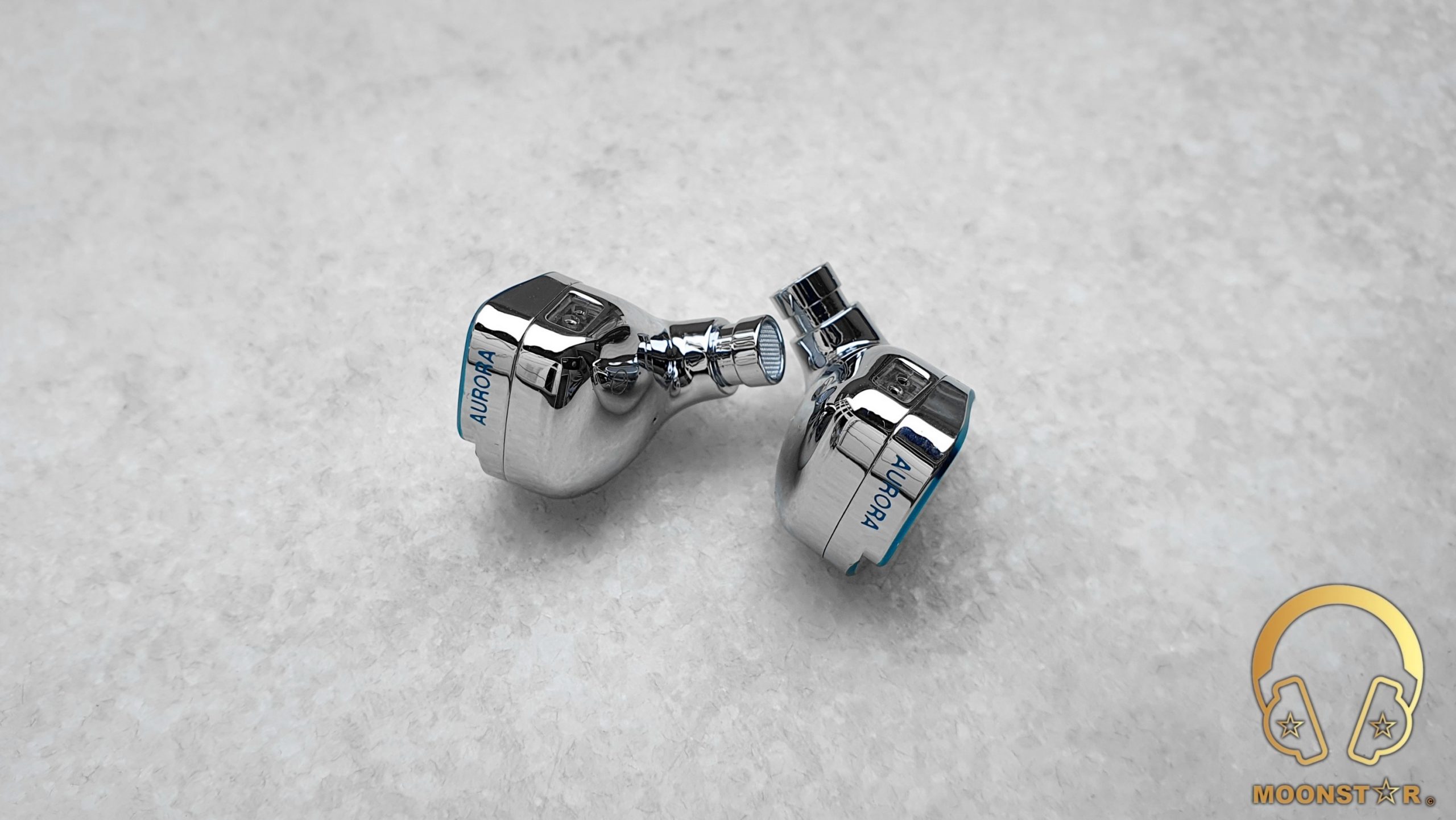 The detachable cable of the KBEAR Aurora has a braided design that features a soft PVC isolation in light blue color. The cable is made of High Purity Silver Plated Copper wire material. 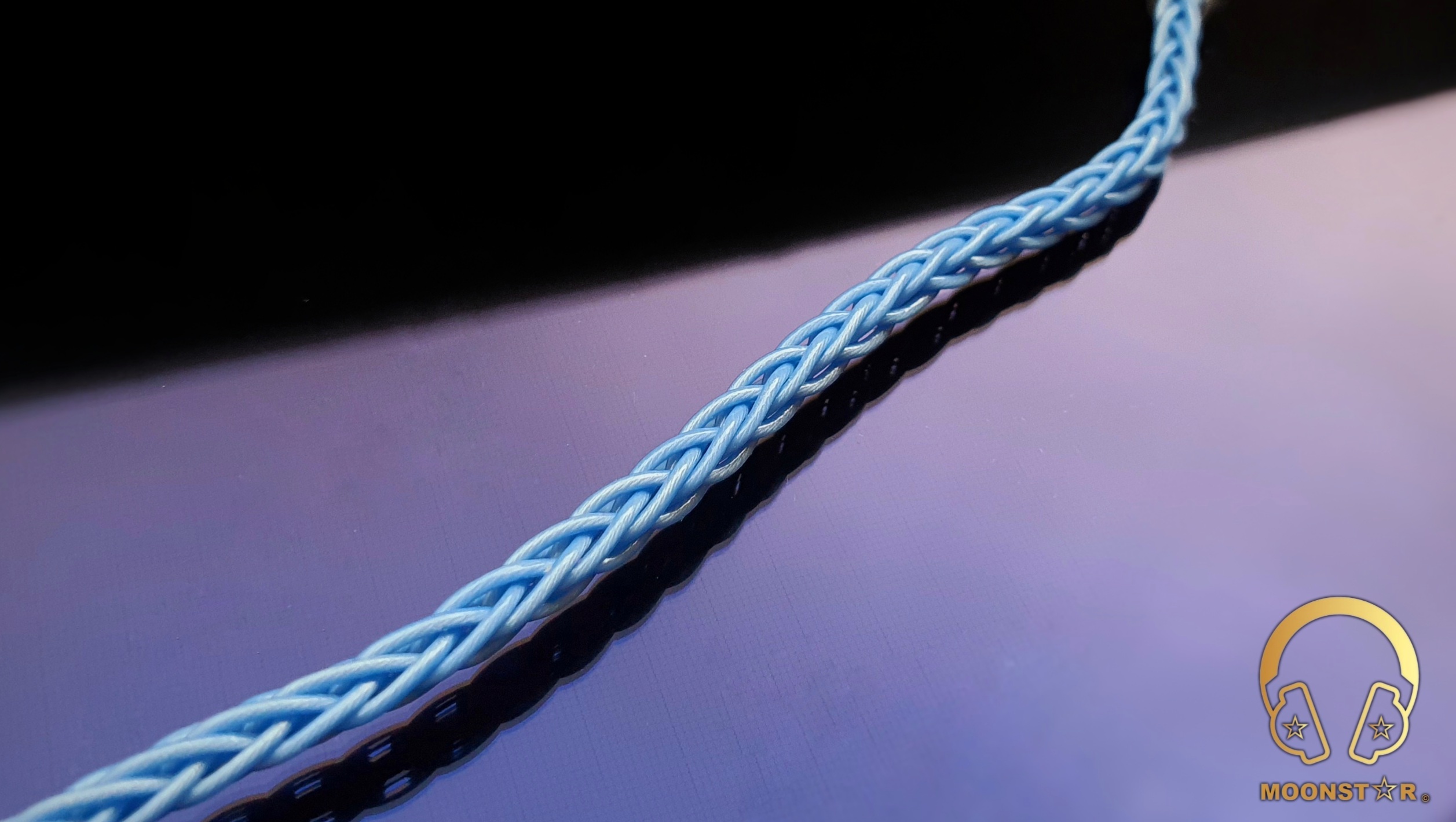 The 2-Pin male connectors are gold plated and do have a metal housing in silver color. 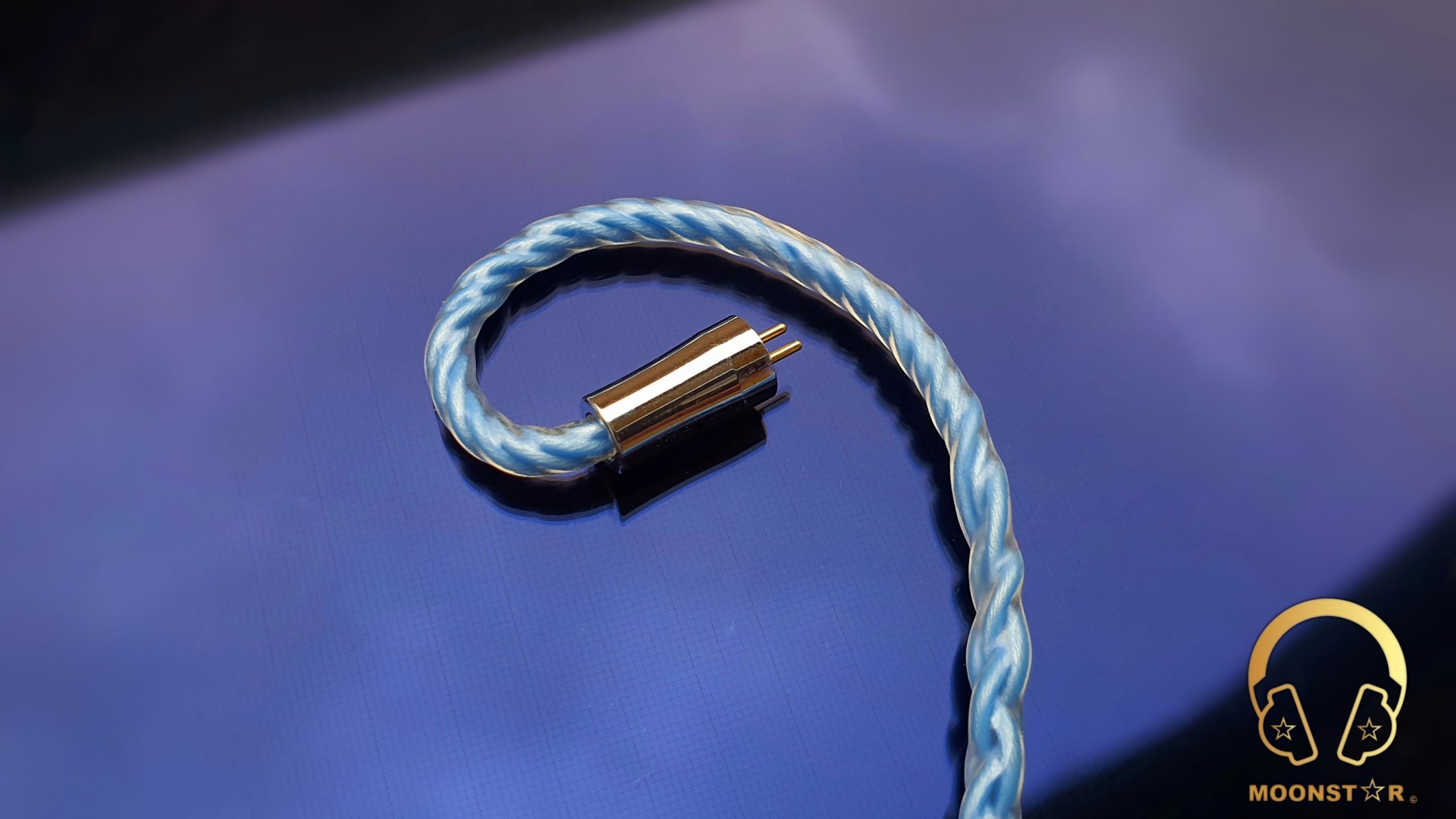 Each connector sports a color indicator which is red for the right and blue for the connector and transparent for the left earpiece. Near the connectors are also flexible heat-shrink ear guides for a more comfortable wearing experience. 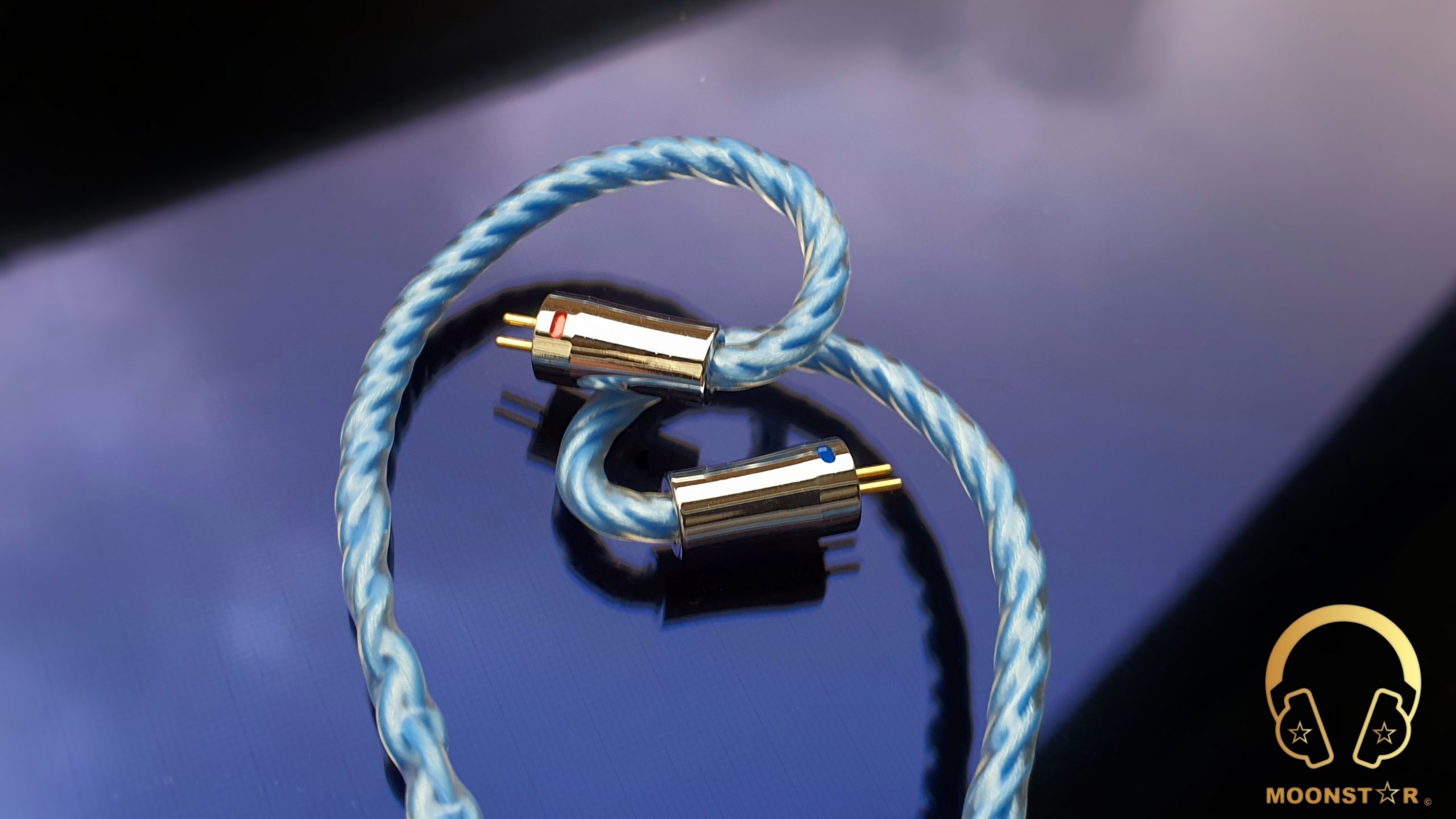 The cable has a metal Y-Splitter and Chin Slider in the same silver color like the rest of the metal surfaces. 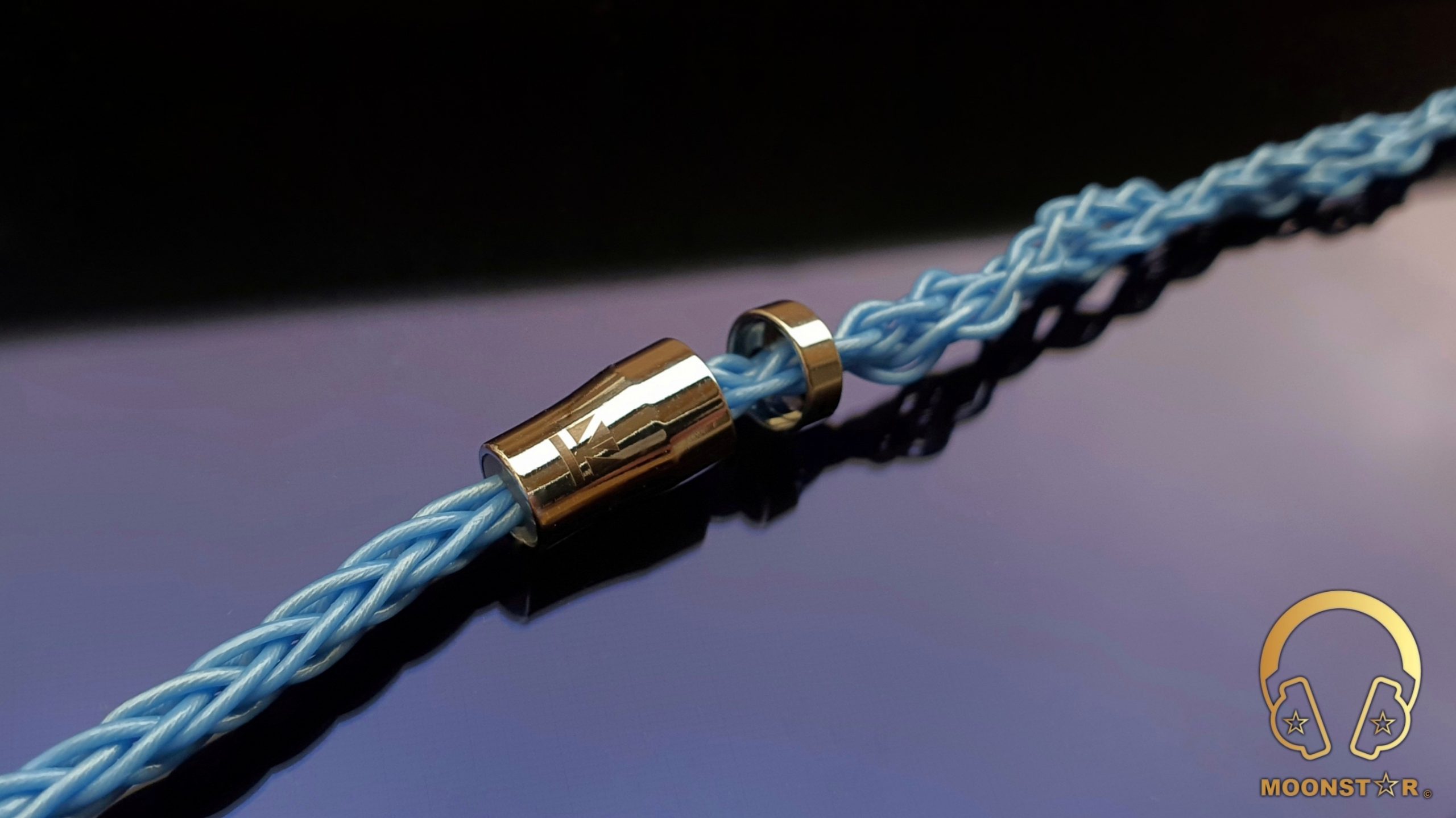 The 3.5mm Single Ended headphone jack has a straight profiled metal housing in silver with the KBEAR logo on the top. This housing sports also a semi transparent strain relief for extra durability. 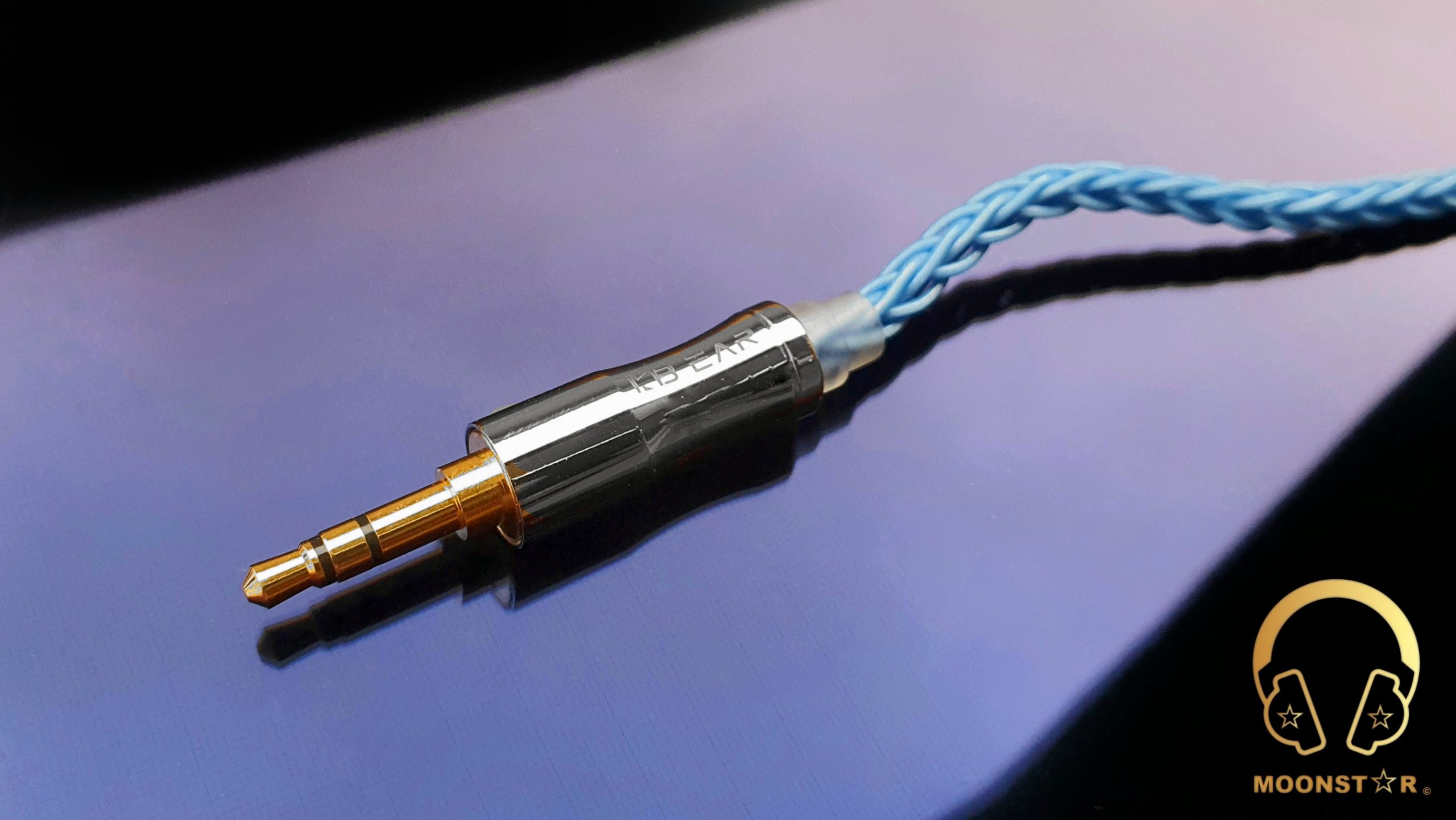 The size of the monitors is slightly larger than in regular, while the inner shape fits perfectly in to my ear concha’s with an average size.

The passive noise isolation of the Aurora is on an average level, which is sufficient enough for the use in relative noisy environments such like a bus, metro or train. 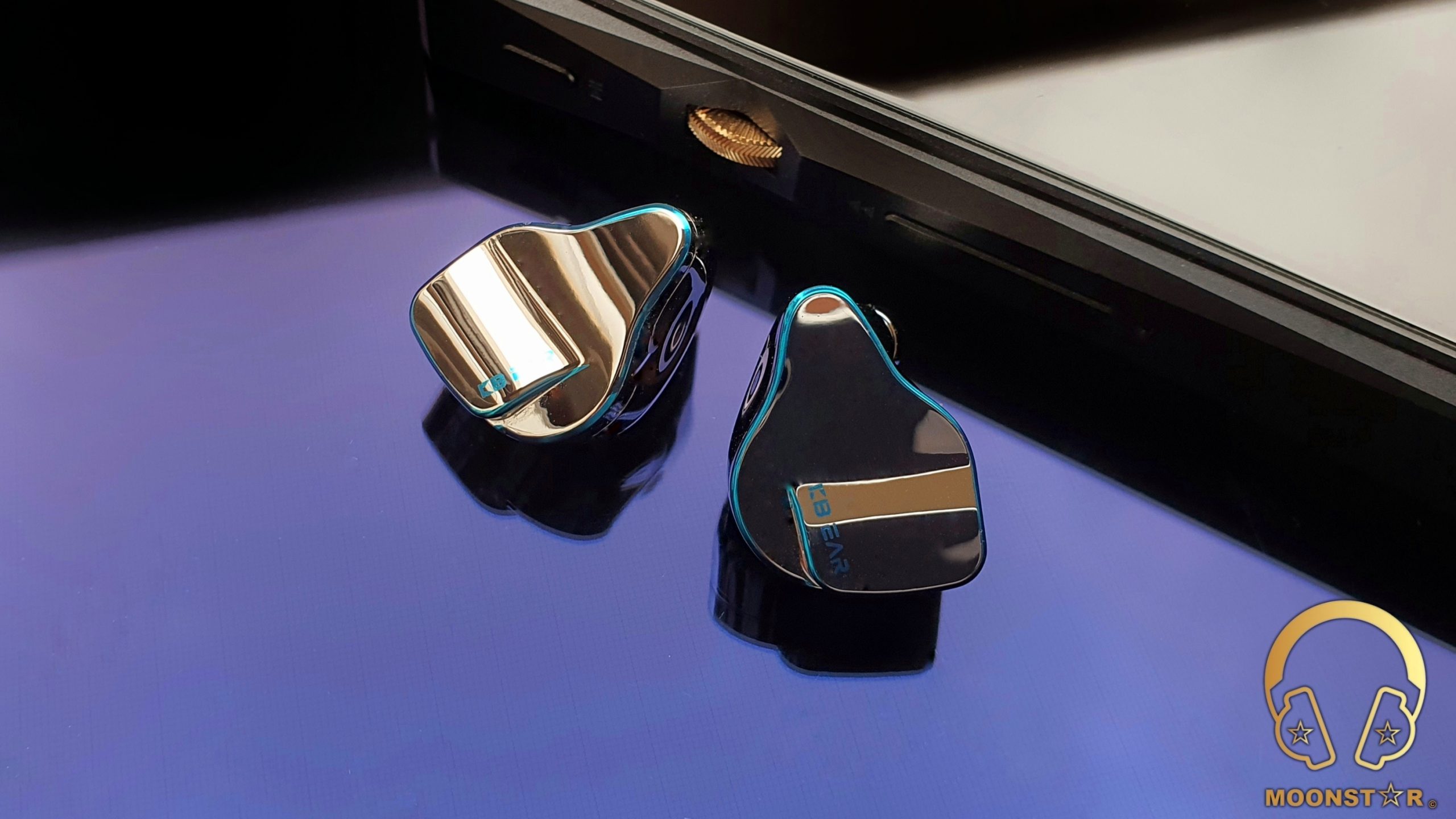 The KBEAR Aurora is a relative efficient In-Ear Monitor with its impedance of 18 Ohms and a sensitivity of 105dB, which makes it suitable for the use with sources like Tablet’s, Smartphone’s of USB Dongles. However, it shows its true potential when you pair it with more powerful devices such like DAP’s or Portable Amplifiers. 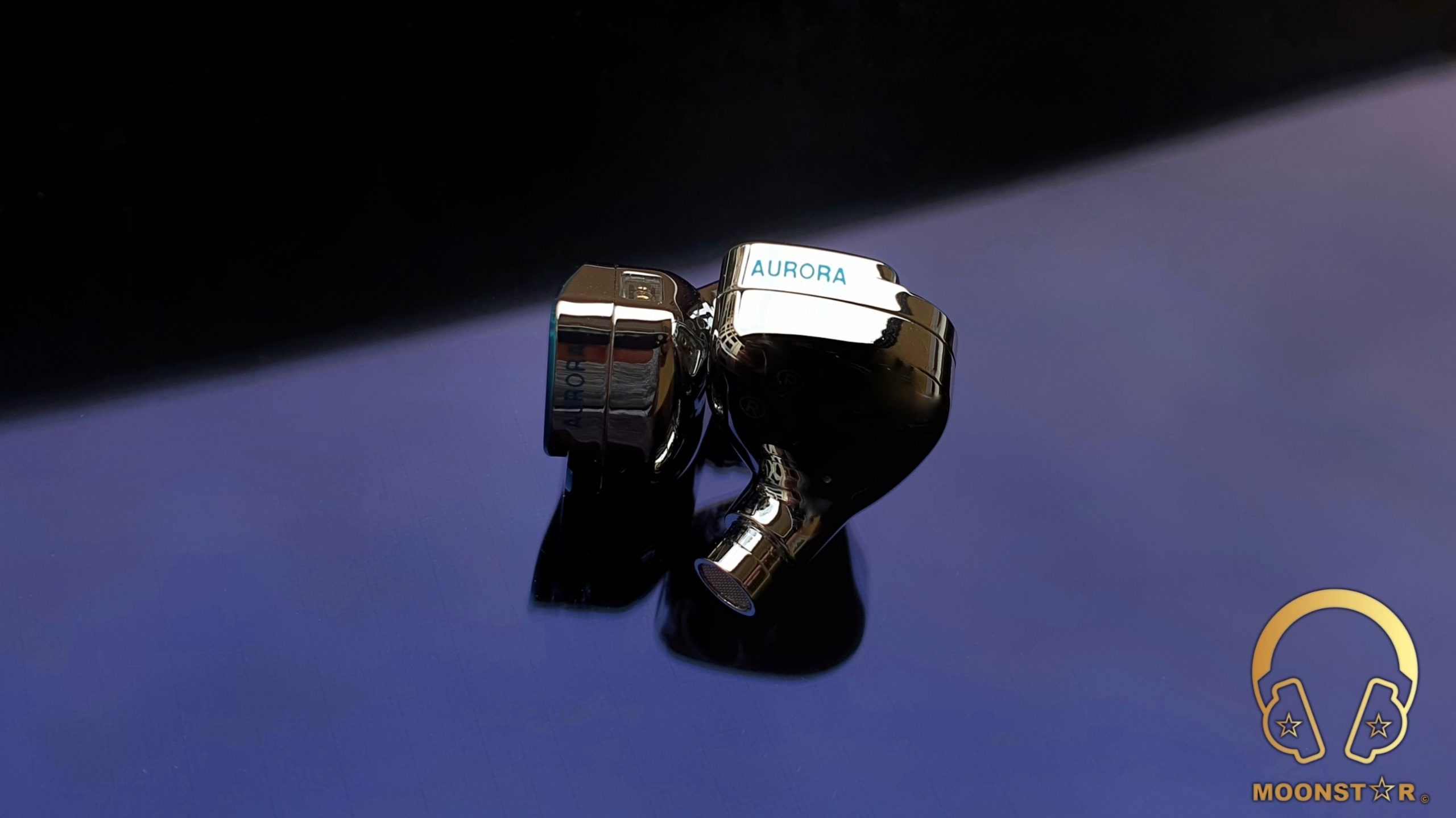 The KBEAR Aurora shows a very musical and entertaining presentation with a slightly warmer than neutral tonality. The bass is nicely dynamic, deep and impactful; the midrange sounds transparent and lively, while the treble range offers a good level of airiness and sparkle.

This review is written after a burn-in period of 60 Hours. I have used the stock cable and the white silicone ear tips that are included to the package. 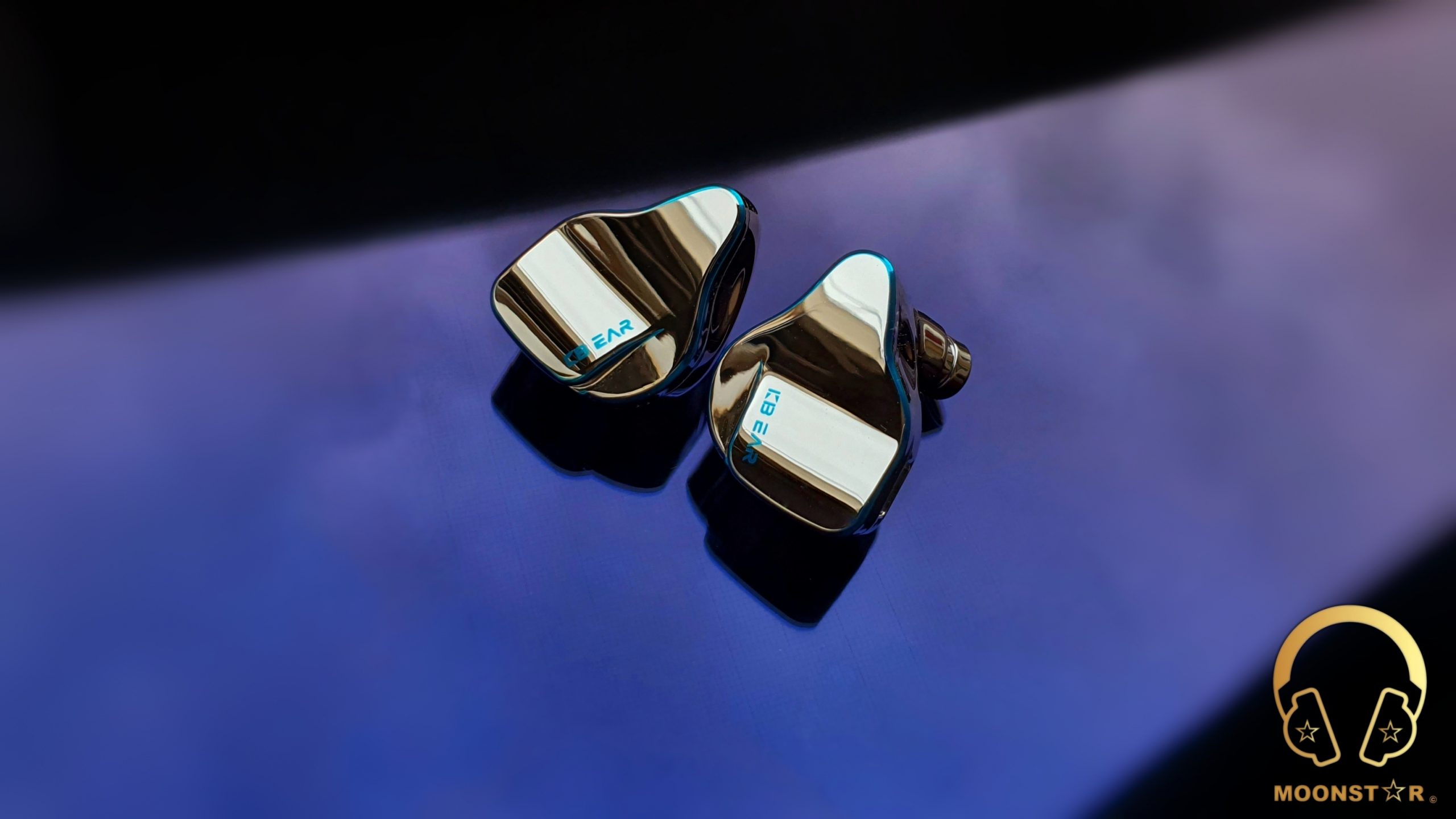 The lower frequency region is of the KBEAR Aurora is one of its highlights, which shows a very dynamic and entertaining sound signature when I do listen to genres from Rock to Pop, from Electronic Music to Hip-Hop. The subbass region has a mildly warm tonality and shows a good sense of depth and rumble, which I highly enjoyed while listen to songs like Really Slow Motion’s “Deadwood”, Lorde’s “Royals”, Jo Blankenburg’s “Meraki ” and Massive Attack’s “Angel”.

The midbass region of the KBEAR Aurora is more highlighted compared to the subbass area that shows in general a pretty fast and controlled presentation, while it has a mildly warm tonality. One of the highlights of this region is the clean and tight response, that doesn’t shows any muddiness or midbass hump.

The 10mm Dynamic Driver of the Aurora offers a good amount of bass intensity, speed and emphasis, which was pretty audible in relative complex passages like in Charly Antolini’s “Duwadjuwandadu” and Gogo Penguin’s “Raven”. The fact that the bass is highlighted, but pretty clean and fast makes the Aurora to a successful IEM at this price range. 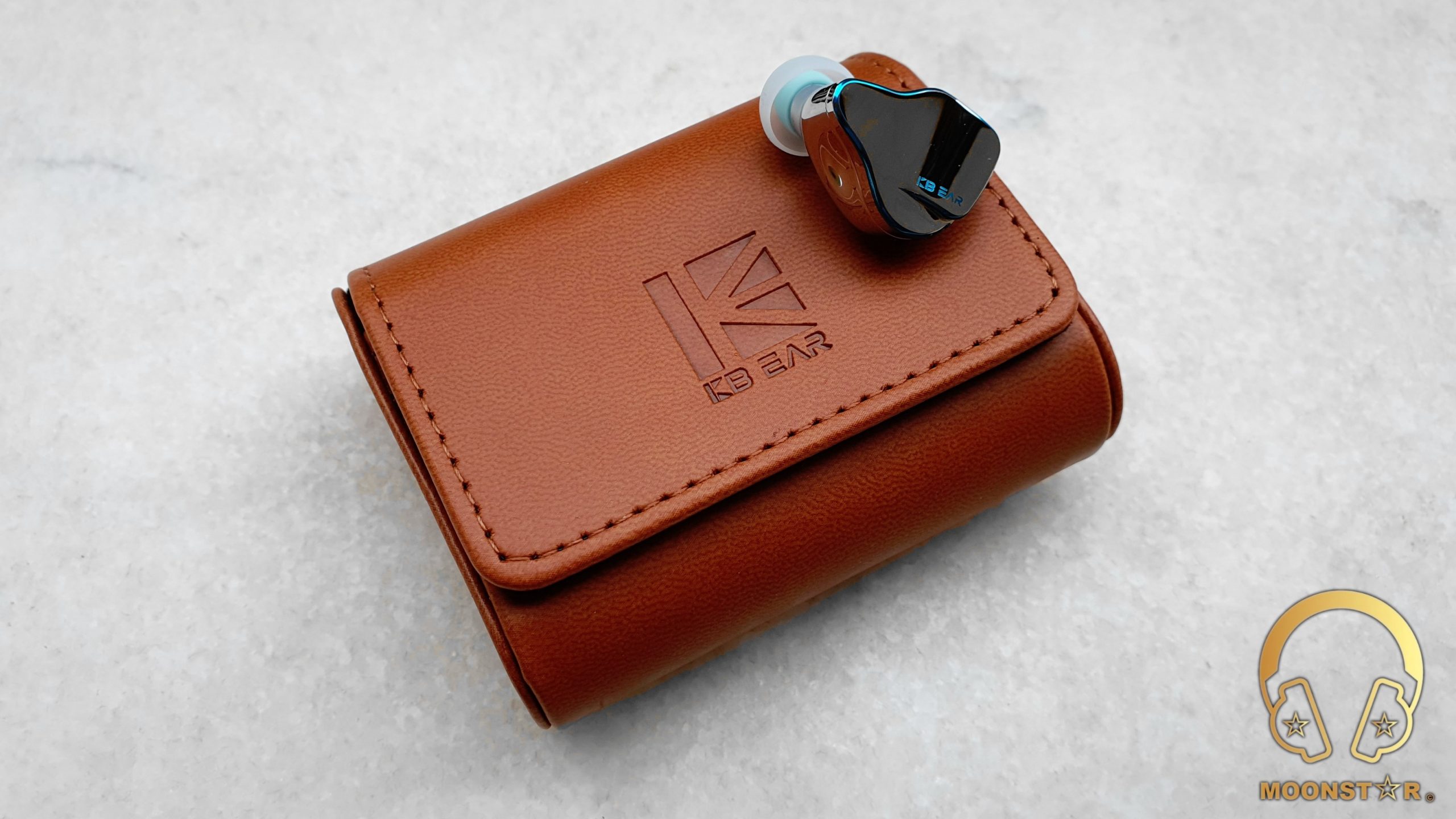 The KBEAR Aurora has pretty lively and transparent midrange character, with a tad warm than neutral tonality. The general presentation is smooth and musical, moreover it’s not that recessed like typical IEM’s with a V-shaped sound signature, which makes it suitable for a wide variety of genres.

The DK-2001 shows a good level of lower midrange depth and body, with an adequate sense of fullness, which is an advantage while listen to male vocals and instruments like cellos or violas. This region sounds pretty clean and detailed, without to have any remarkable negative conditions such like muddiness and mixings.

The upper midrange of the KBEAR Aurora has a close to neutral, moderately pronounced and smooth character. The upper midrange sounds in general lively, soft and balanced while listen to female vocals to instruments such like violins and woodwinds. Female vocals like Edith Piaf, Sertap Erener or Dionne Warwick are reproduced in a fresh, slightly warm and musical manner, without to show any negative situations like sibilance or harshness.

Instruments like guitars are slightly warmish, a bit bassy and bright towards the lower treble region, while pianos are pretty soft and moderately bright in tonality. 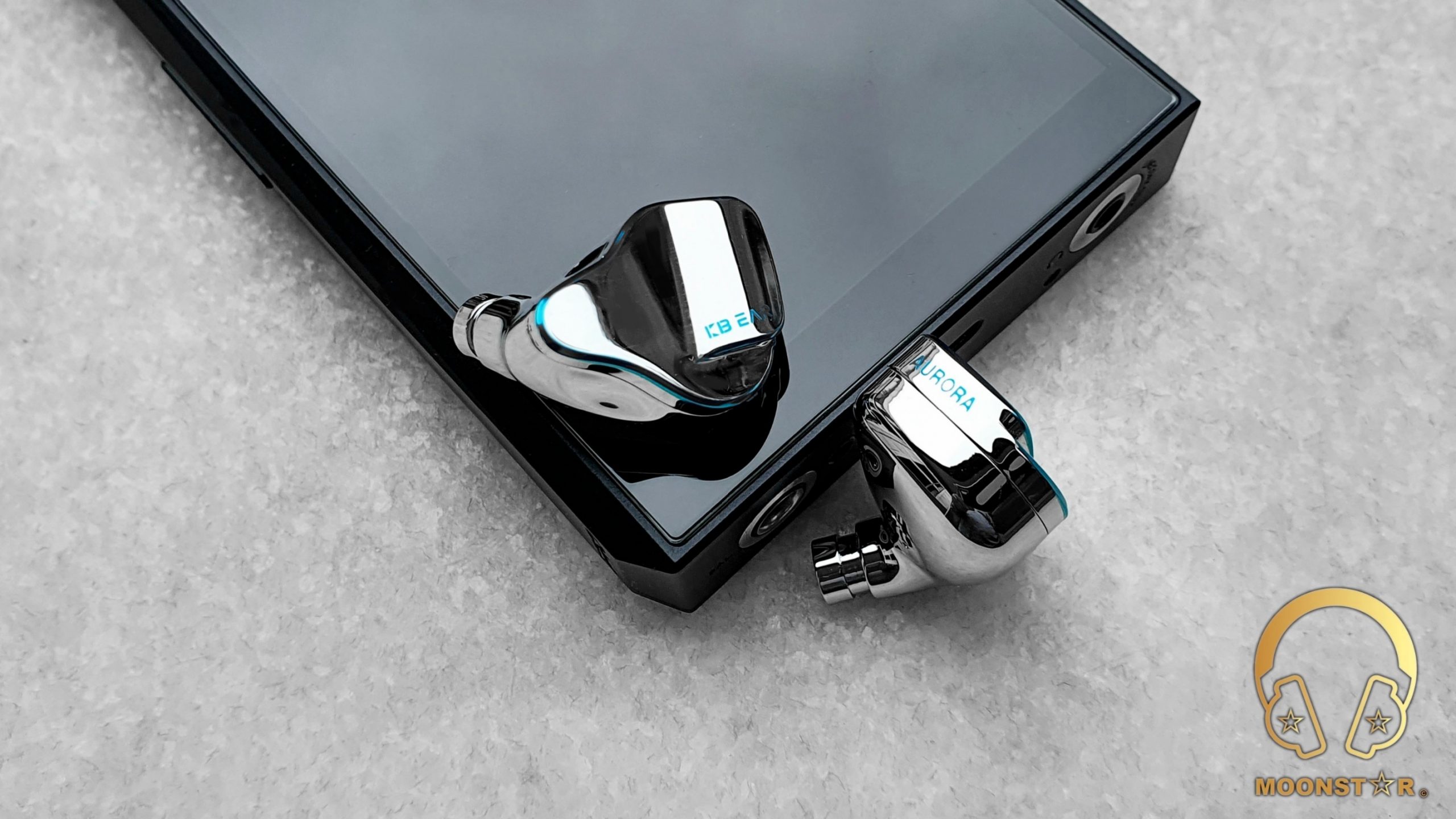 The treble range of the KBEAR Aurora has a moderately bright and pretty controlled treble presentation, which efficient sense of airiness and detail retrieval, which easily fulfills the expectation from a Single Dynamic Driver In-Ear Monitor at this price range.

The lower treble region shows a sufficient level of authority and detail retrieval, while the extension is slightly short. It is controlled and is able to produce an adequate sense of clarity and definition without to sound too bright, sharp or muted, when I do listen to instruments like pianos or strings.

The upper treble region of the KBEAR Aurora shows a slightly peak around the 8 kHz region that was also visible in some graphs. The sense of airiness and sparkle is on a sufficient level when I do listen to instruments such like Hi-hat or cymbals. Other instruments such like crash and ride cymbals don’t show any negative conditions like mixings or over sharpness.

The general treble intensity and quantity is not too much or to low and will satisfy with a wide variety of genres. What I really like of the treble tuning is the good sense of balanced and controlled that doesn’t sounds to bright, overly sharp or muted. 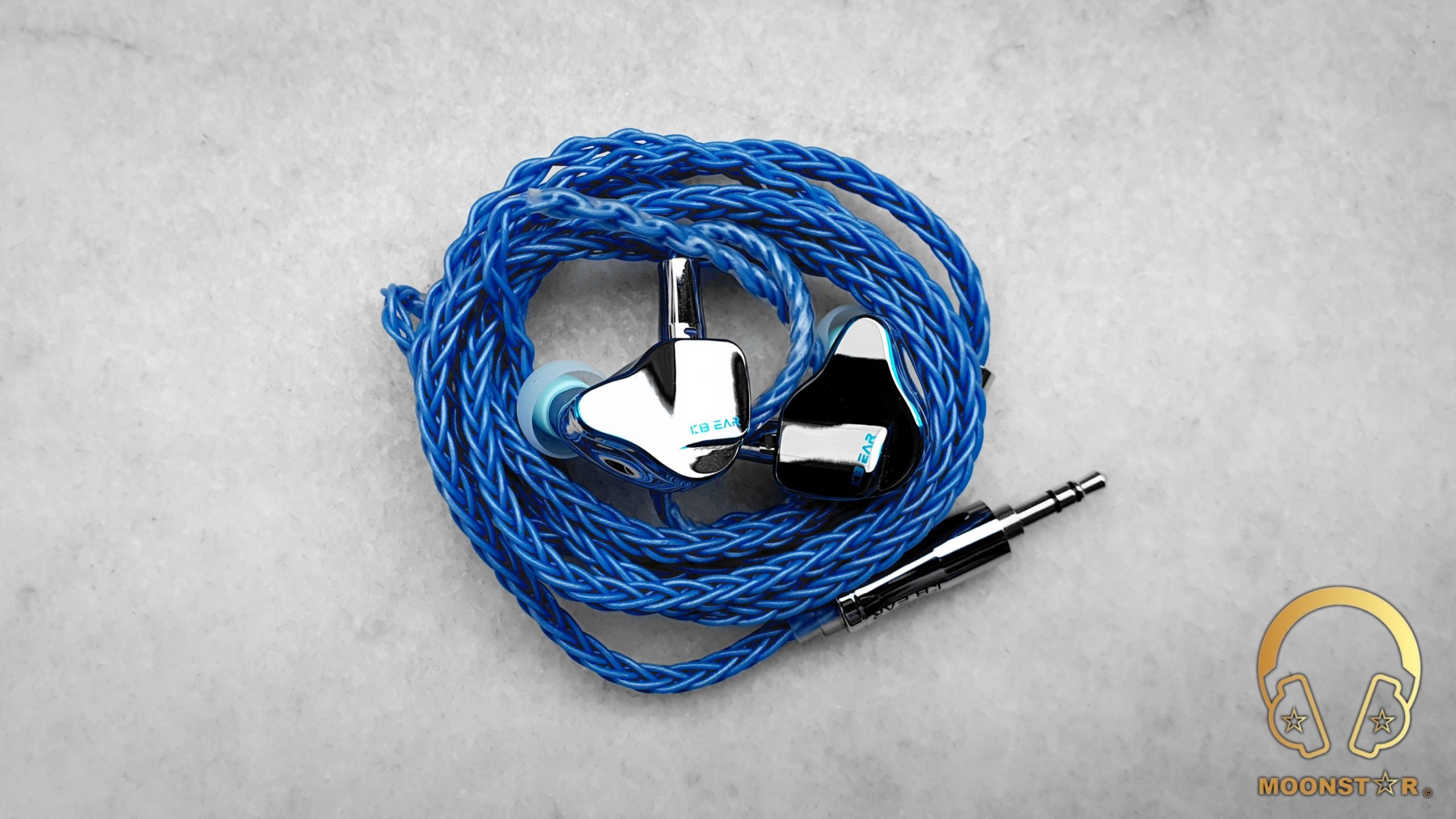 The KBEAR Aurora shows a fairly precise separation and placement of both instruments and vocals. The soundstage offers a good sense of airiness, while the depth, height and wideness of the stage are on a moderate level, which is quite sufficient for a product at this price range.

KBEAR Aurora versus Final Audio B2:

Both In-Ear Monitors do come with a solid metal housing and do fit perfectly to my average sized ear concha’s. The actual Price of the Final Audio B2 is 299.00 USD, while the KBEAR Aurora is quite cheaper with 169.00 USD.

The Final Audio B2 shows a slightly warmer tonality and has a less dynamic presentation compared to the KBEAR Aurora, which has a more energetic and entertaining sound character.

The midrange of the Final Audio B2 has a slightly warmer tonality and a slightly more forward oriented presentation compared to the KBEAR Aurora that offers on the other hand more transparency and slightly better sense of micro detail retrieval.

The treble range of both IEM’s shows a similar level of control and extension, while the focal points area a bit different. The lower treble region of the Final Audio B2 sounds slightly more highlighted and detailed, while the KBEAR Aurora has the upper hand in the upper treble region that is able to produce a better sense of airiness, sparkle and resolution.

The soundstage of the both the KBEAR Aurora and Final Audio B2 shows a pretty similar performance in terms of wideness, while the Aurora has the slightly edge in terms of soundstage depth and airiness. 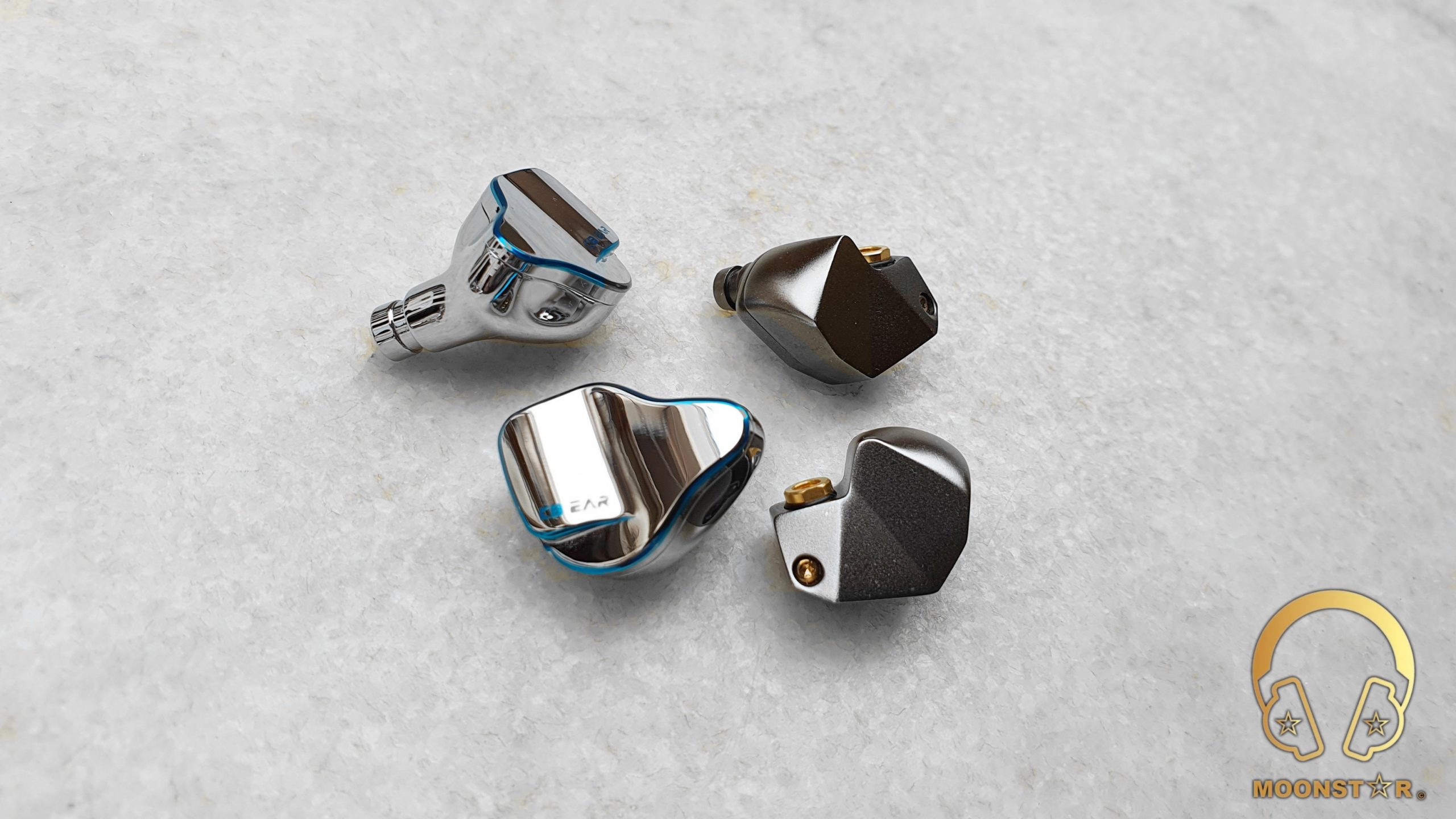 The KBEAR Aurora and the TFZ MyLove are similar priced IEM’s (169.00 USD) that do come with a Single Dynamic Driver Configuration. The MyLove III has a resin shell, while the Aurora has an Aluminum Alloy monitor housing. Both In-Ear Monitors do offer an average passive sound isolation.

The subbass region of the Aurora is slightly less highlighted compared to the MyLove III, but offers a better sense of authority and clarity in this area. The midbass region of the MyLove III has more body and intensity, but shows also a noticeable midbass hump that affects the clarity of the midrange. The Aurora also the upper hand of speed, control and resolution in this area.

The midrange of the TFZ MyLove III shows a warmer tonality and fuller presentation, but sounds also less transparent, detailed and airy than those of the KEBAR Aurora. The lower midrange of the MyLove III has more body and depth, which makes it more successful with male vocals, but is less detailed in this area.

The KBEAR Aurora is superior when it comes to the detail retrieval, control and extension of both the upper midrange and treble regions.

The soundstage of the KBEAR Aurorais more successful in terms of wideness and depth. It offers also a better sense of airiness and separation of interments and vocals. 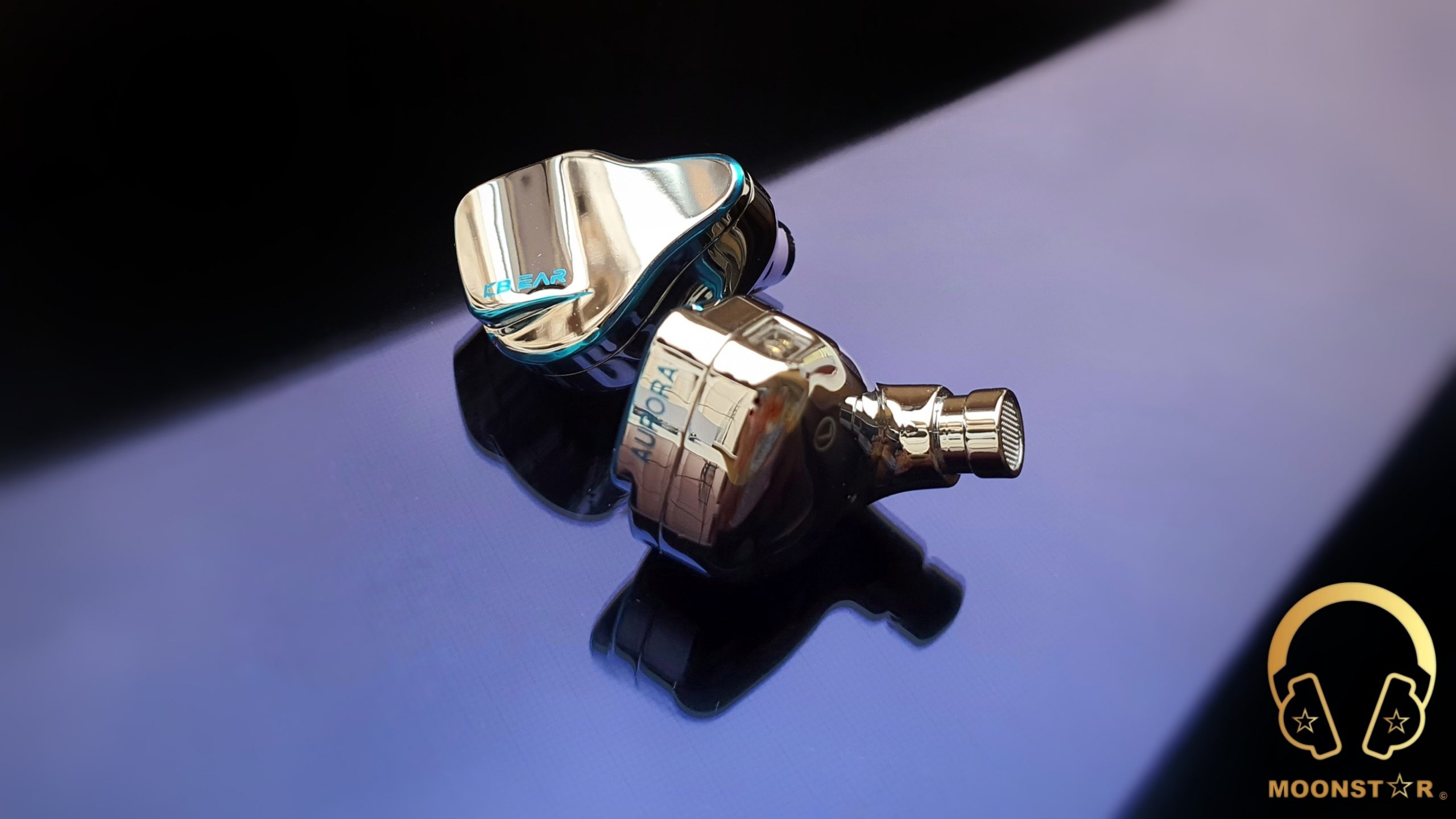 The KBEAR Aurora is another IEM with a great value for your money, which offers both a solid build quality and overall sound performance. It has a very robust Aluminum Alloy shell with a polished look that fits pretty well in to my ears. The sounds is very dynamic, highly entertaining and shows an above average performance from the lows up to the highs, which makes it’s to a good all-rounder below the $200 USD price range.