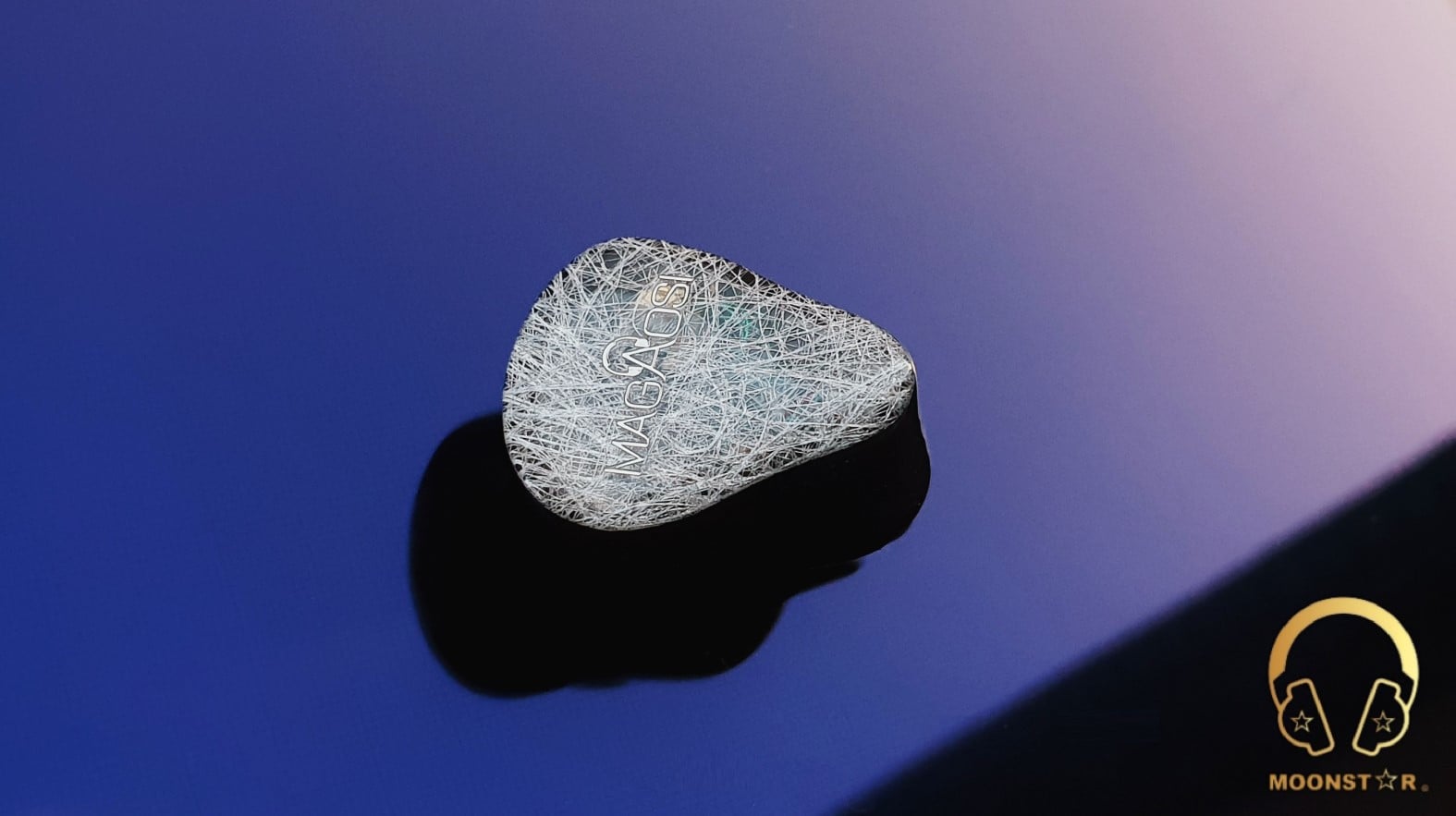 Magaosi is a brand of HiLisening Co. that is located in Guangdong – China and is specialized in the production, design and development of IEM’s (In-Ear Monitors).

The Magaosi DQ4 features a 2 BA + 2DD hybrid driver configuration with a 4-way crossover. One of the Balanced Armature driver is responsible for the treble range, while the other is producing the midrange. The two Dynamic drivers are (one with 6mm diameter and one with 8mm diameter) are producing the lows. The DQ4 has also two (2) sound tuning switches for 4 different sound signatures.

Magaosi DQ4 was provided to me by Magaosi via Penon Audio for free of charge as a review sample. I am not affiliated with Magaosi or Penon Audio beyond this review and these words reflect my true, unaltered, opinions about the product.

The actual price for the Magaosi DQ4 is 179,00 USD and can be purchased from Penon Audio under the following link:

The Magaosi DQ4 came in a rectangular box which is wrapped with a black cardboard that features the product branding and a small window on the top.

The main box is in grey color with Magaosi Logos and has a plastic opening/window on the top where you can see the DQ4 monitors. 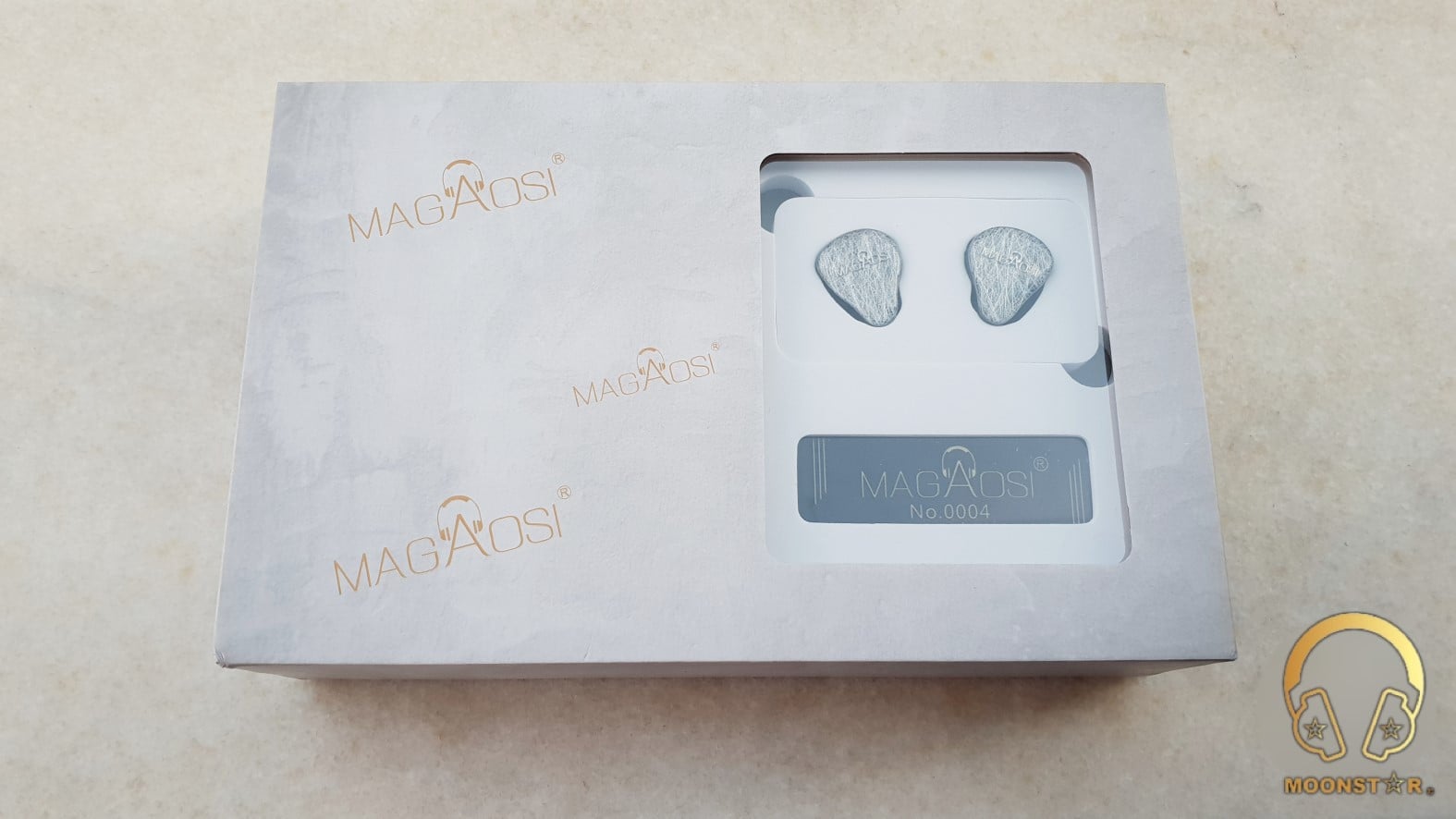 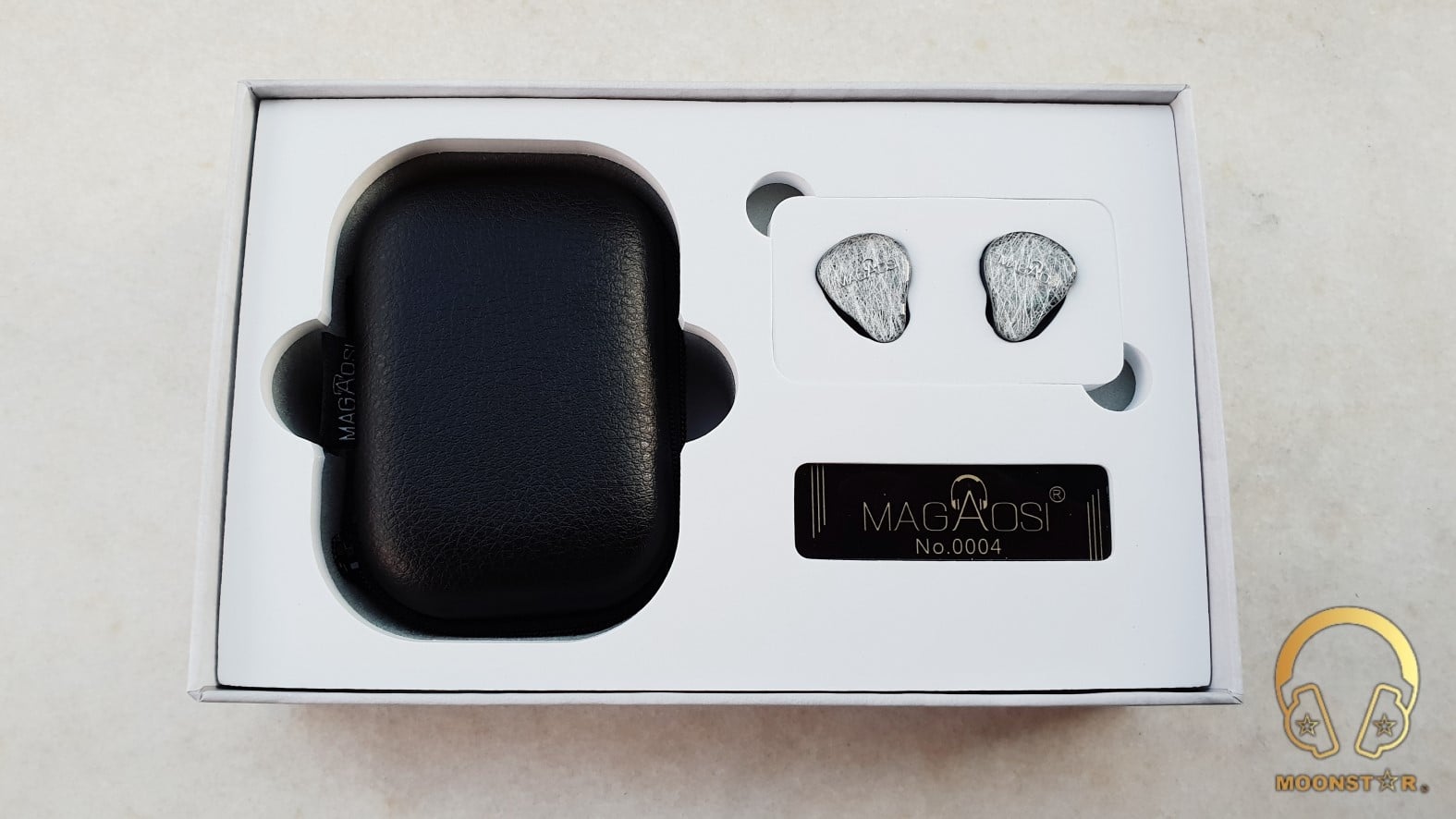 This box is including the following contents: 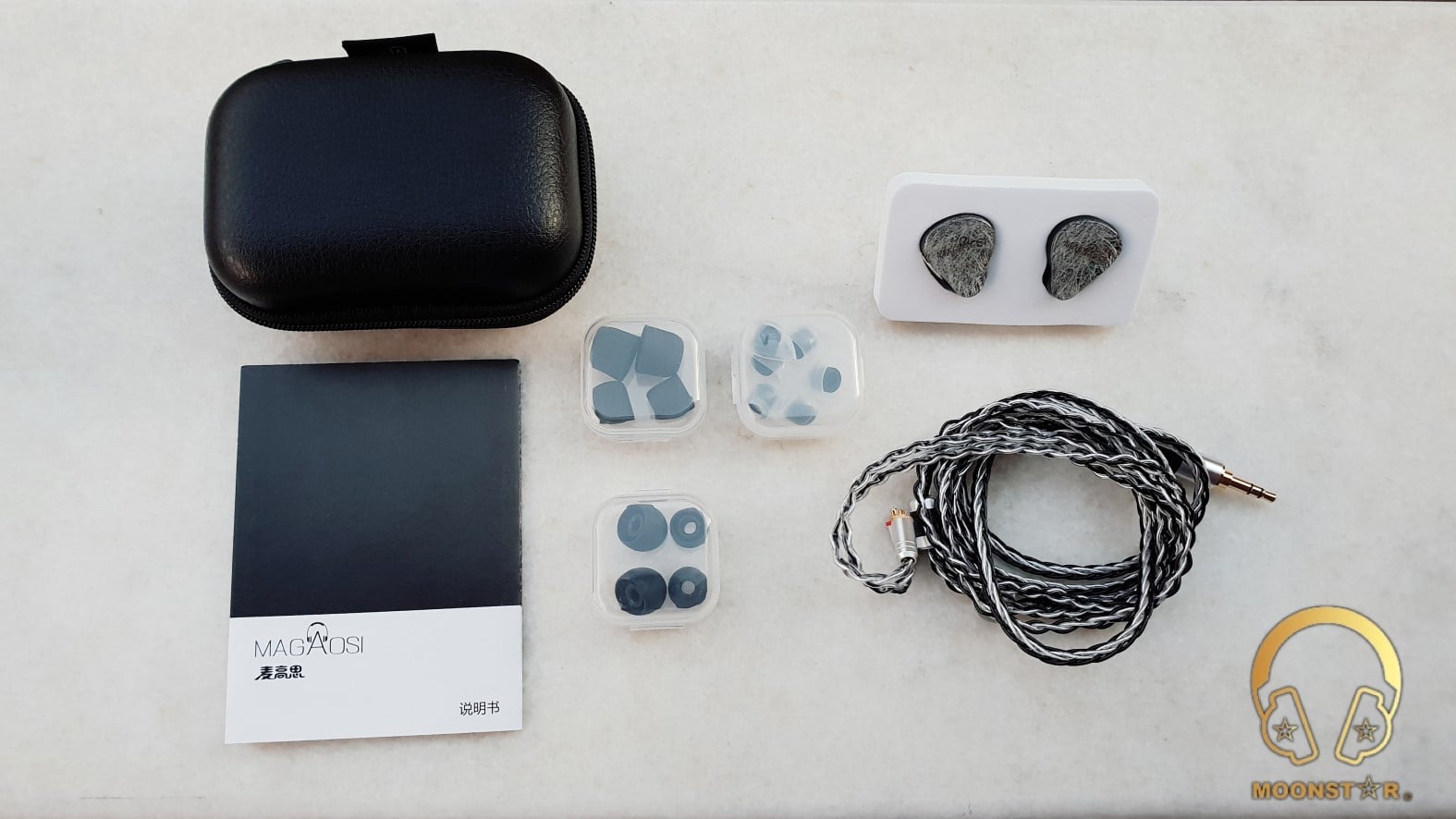 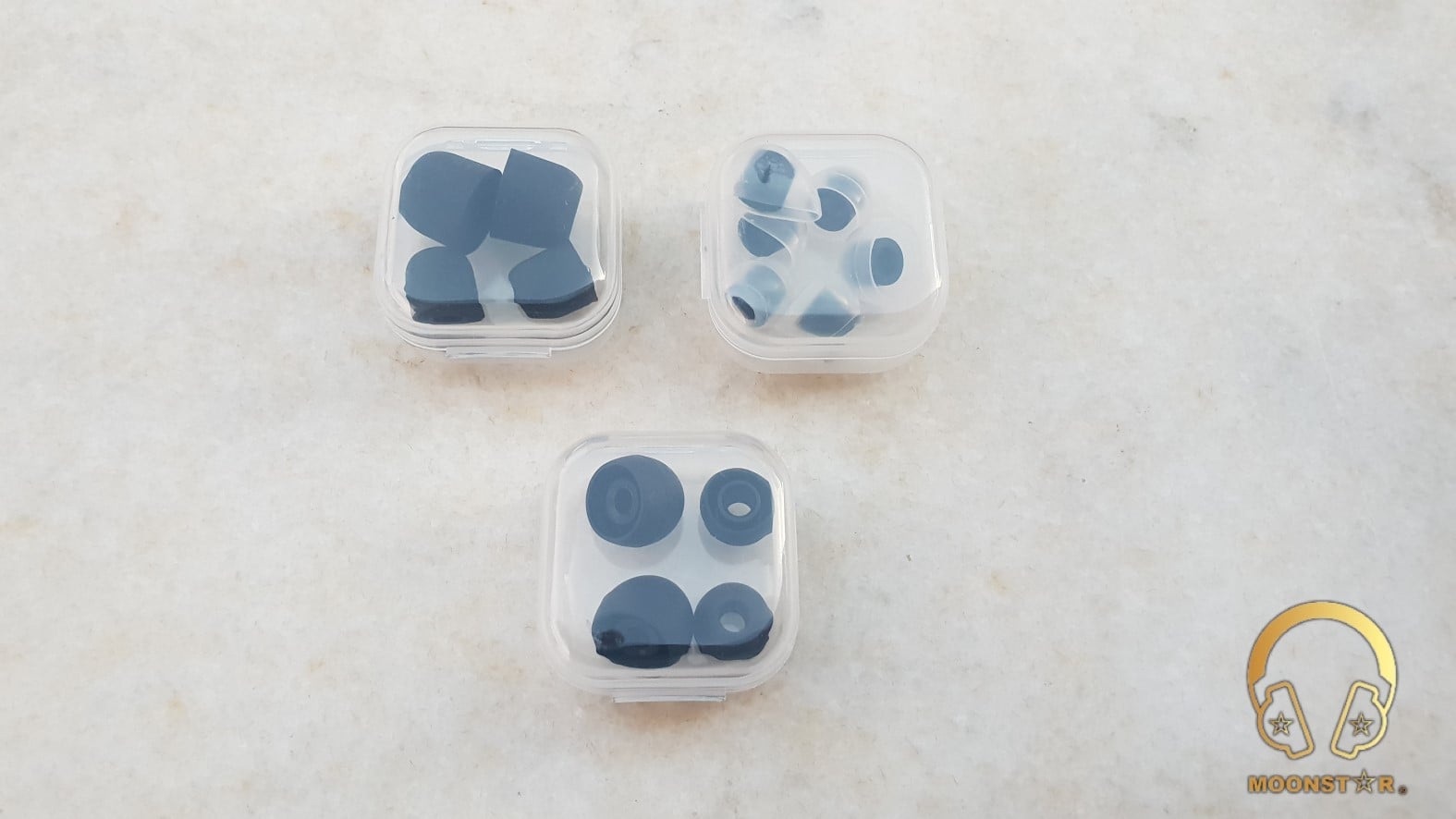 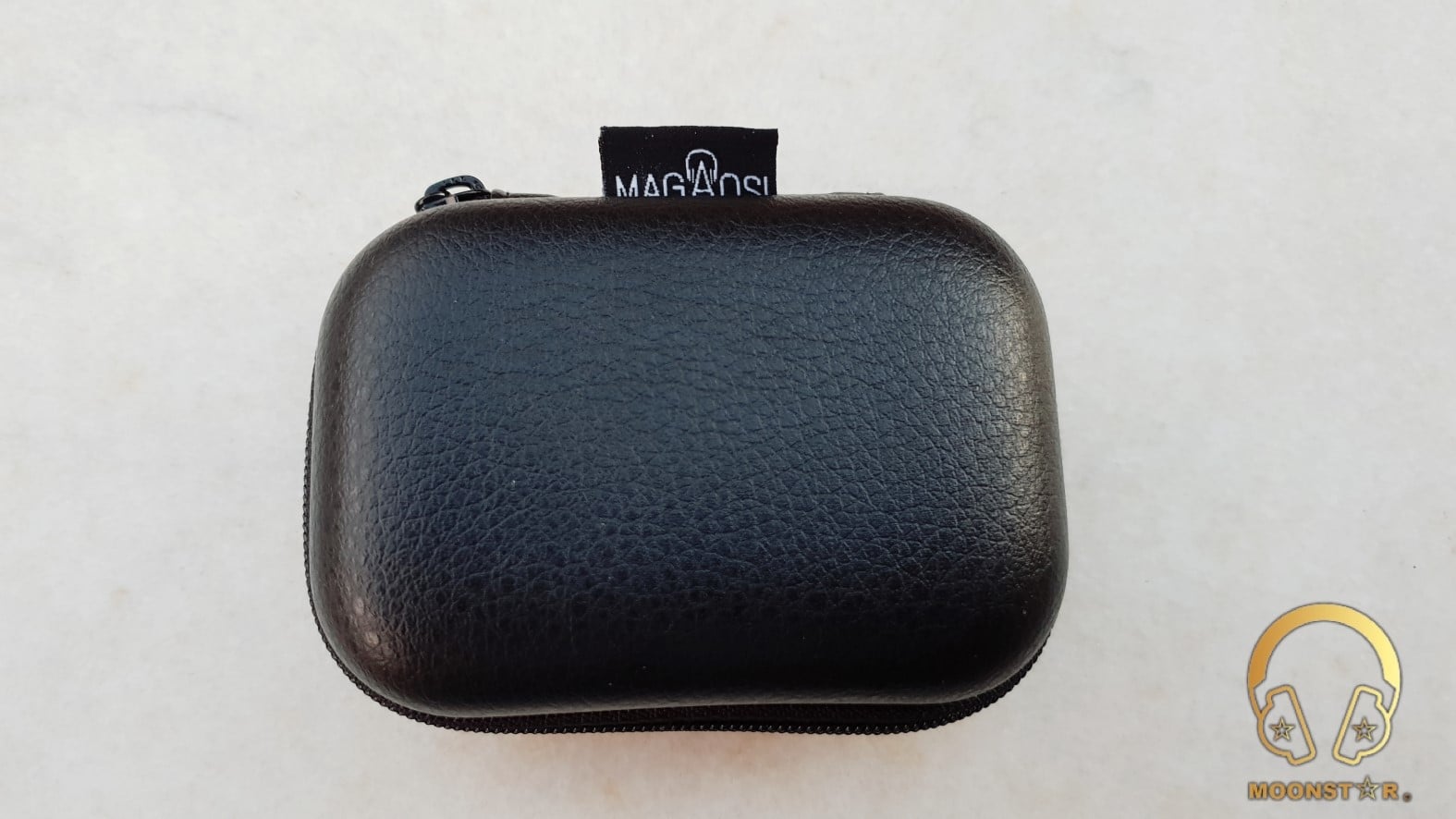 The Magaosi DQ4 is a nice looking IEM with a black plastic housing (with exception of the faceplate). The overall build quality of the Magaosi DQ4 is very good especially for an IEM at this price category. 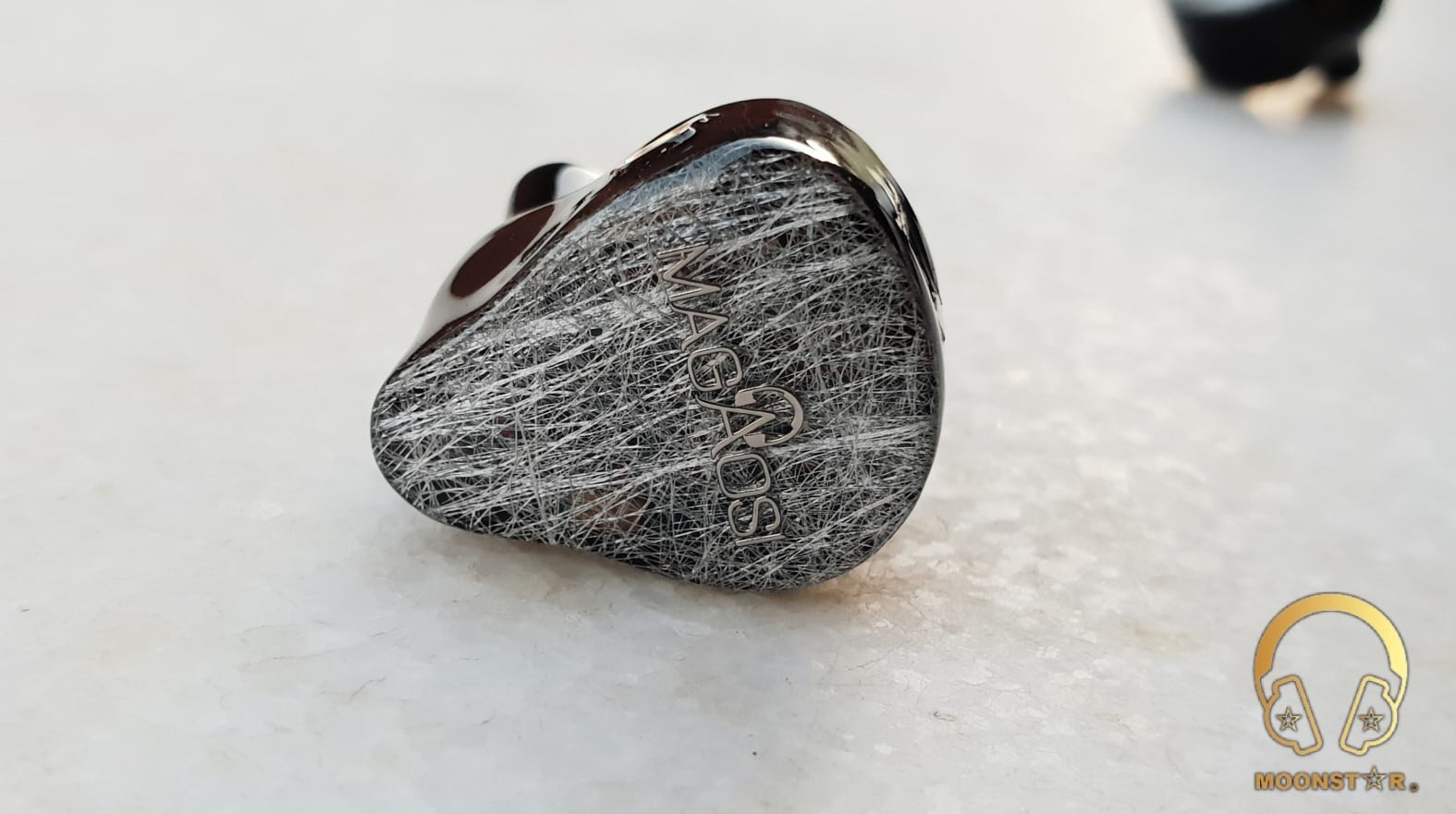 On the front of the monitor shell is the part that we describe as faceplate which has a beautiful silver tinsel design with Magaosi logo. 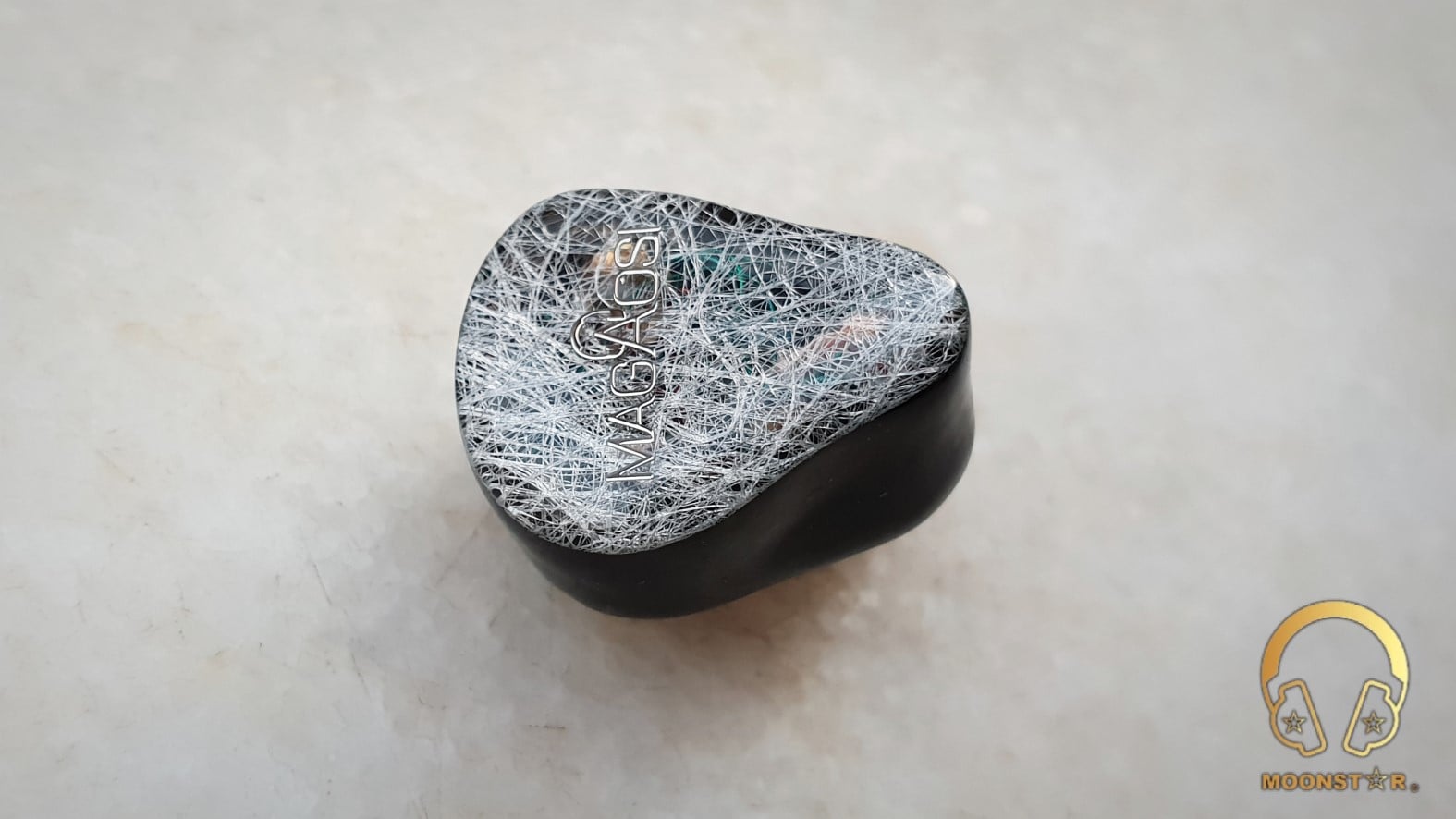 At the rear side of the monitor shell are the two (2) small sound tuning switches that you can use to customize the sound signature, which is a nice feature. 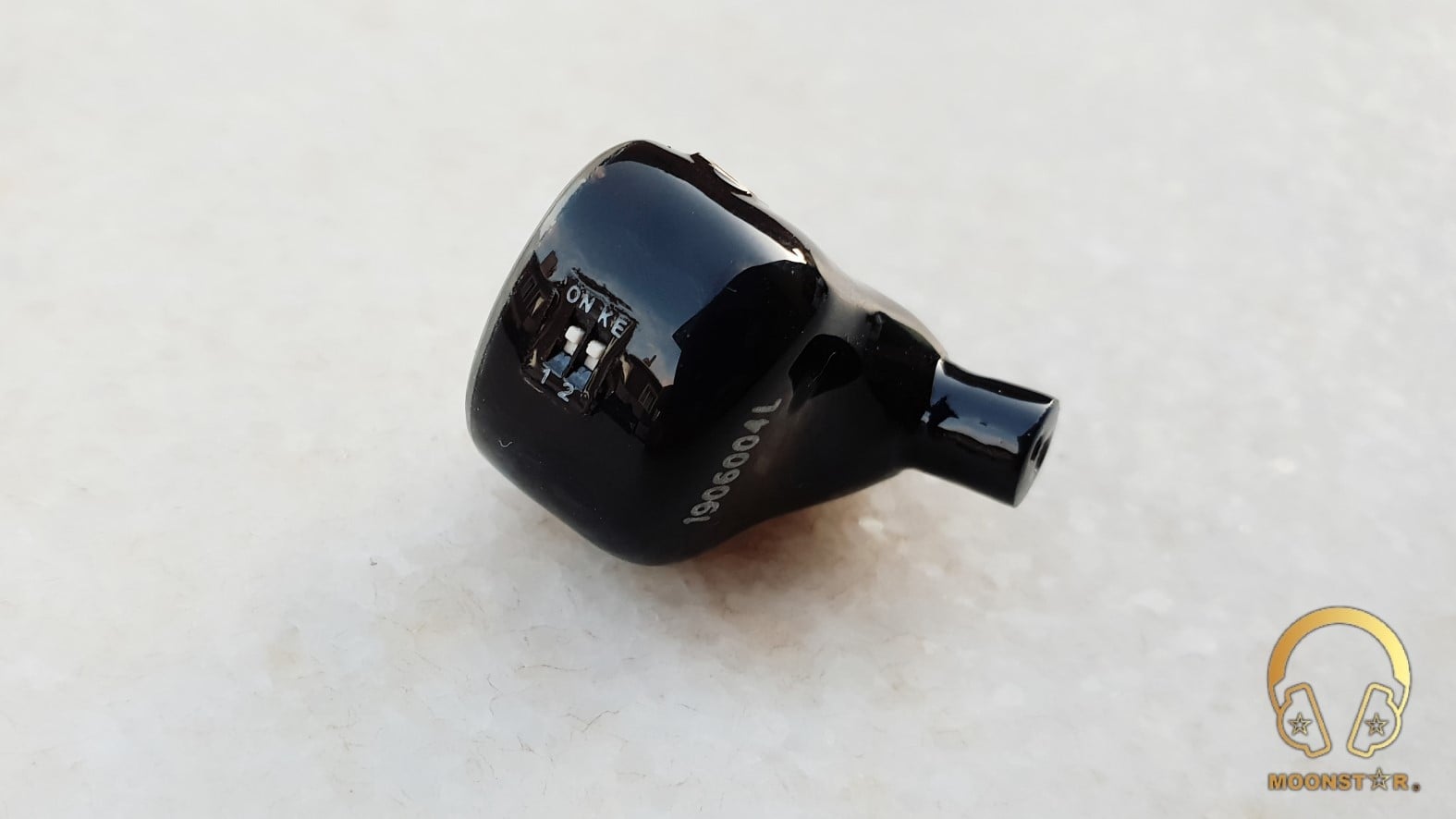 On the top of the monitors are the MMCX (Micro Miniature Coaxial) female connectors and the small opening which is the bass vent. 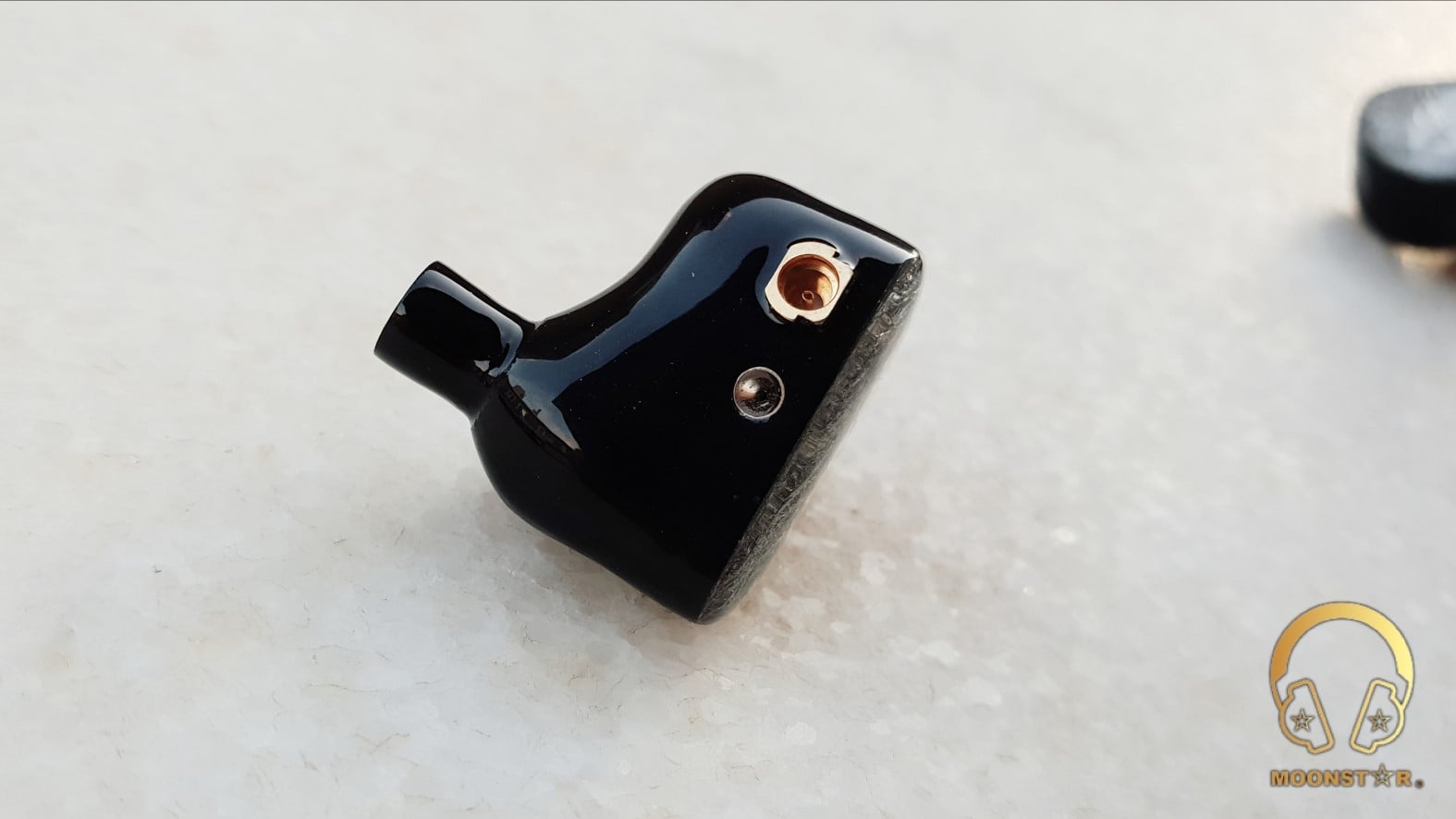 On the inner surface of the monitor shell is the serial number of the product that is printed in white color. Here is also the sound nozzle that has two sound bores (one big and one with smaller diameter) on the top. 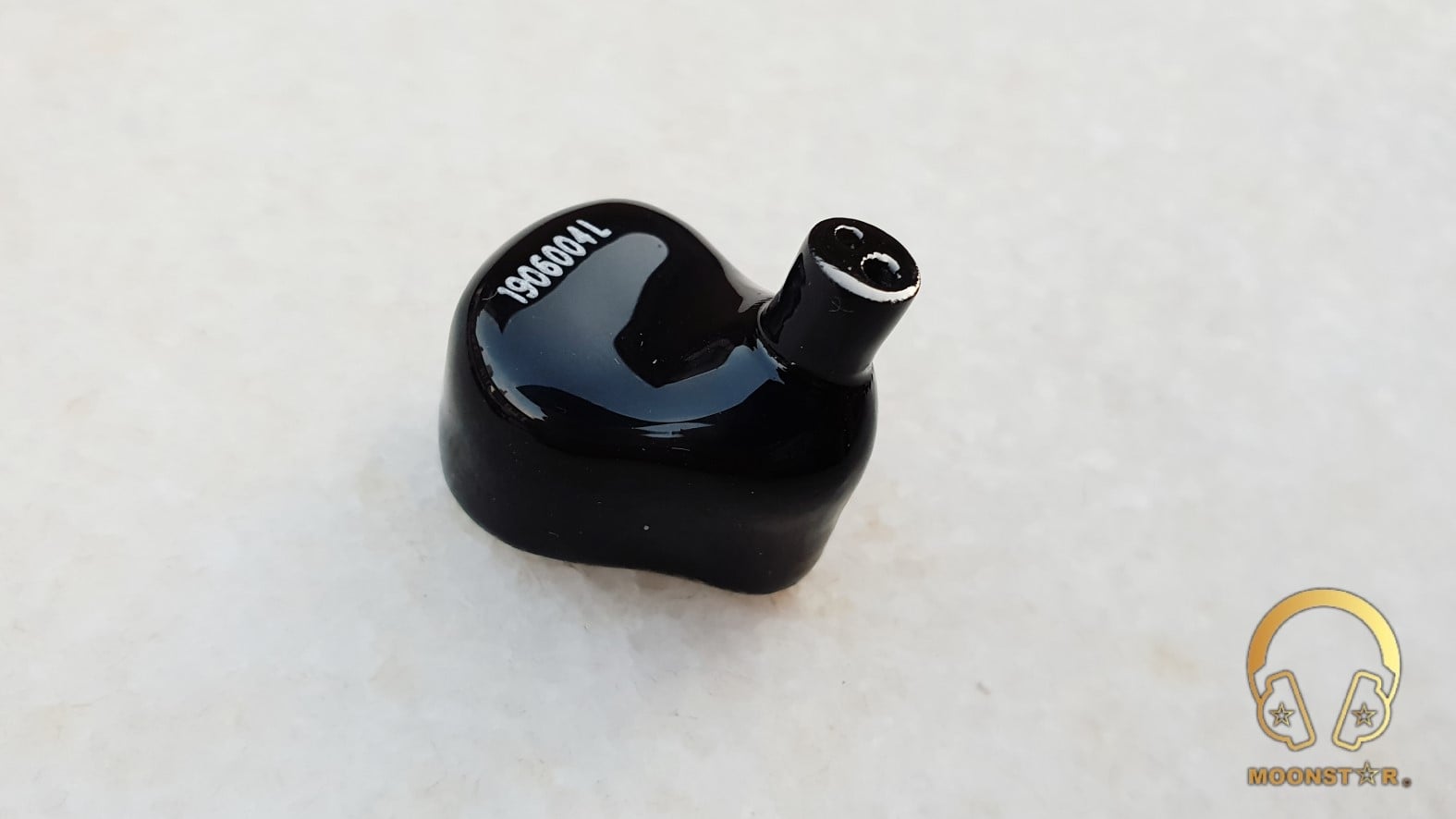 This bores have no filters which could prevent the insertion of dust or earwax, so you need to clean the bores with the cleaning tool that comes as standard accessory.

The Magaosi DQ4 comes with a detachable 8 core single crystal copper & OFC silver- plated mixed cable with a purity of 6N. This cable has a nice braided design and features MMCX connectors. The single crystal copper cores have a black PVC isolation while the Silver plated OFC cores have a transparent coating. The cable is very soft and flexible and doesn’t show any of does annoying mixing issues. 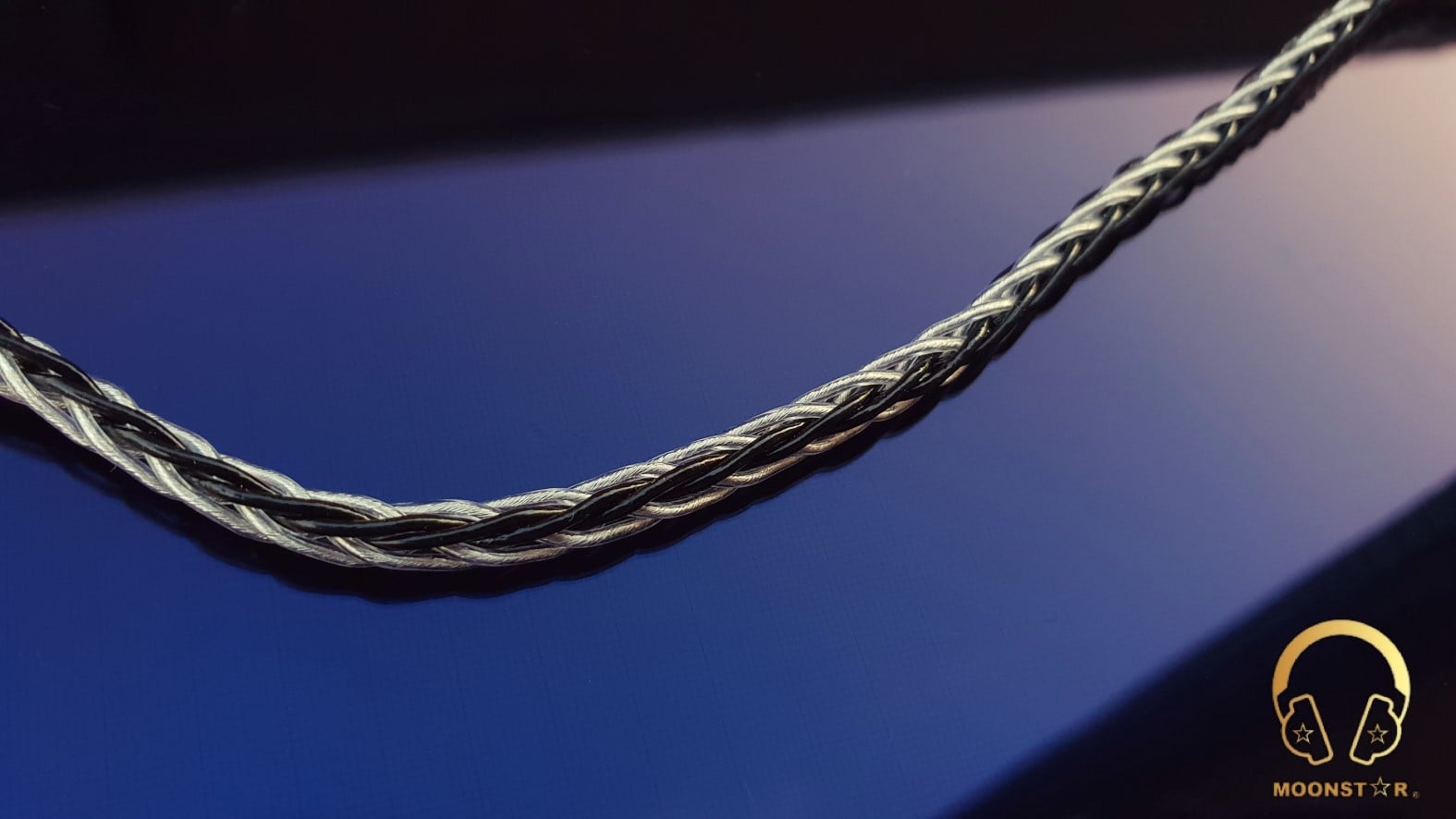 The MMCX connectors have metal housings in silver color housings with left and right indicators. 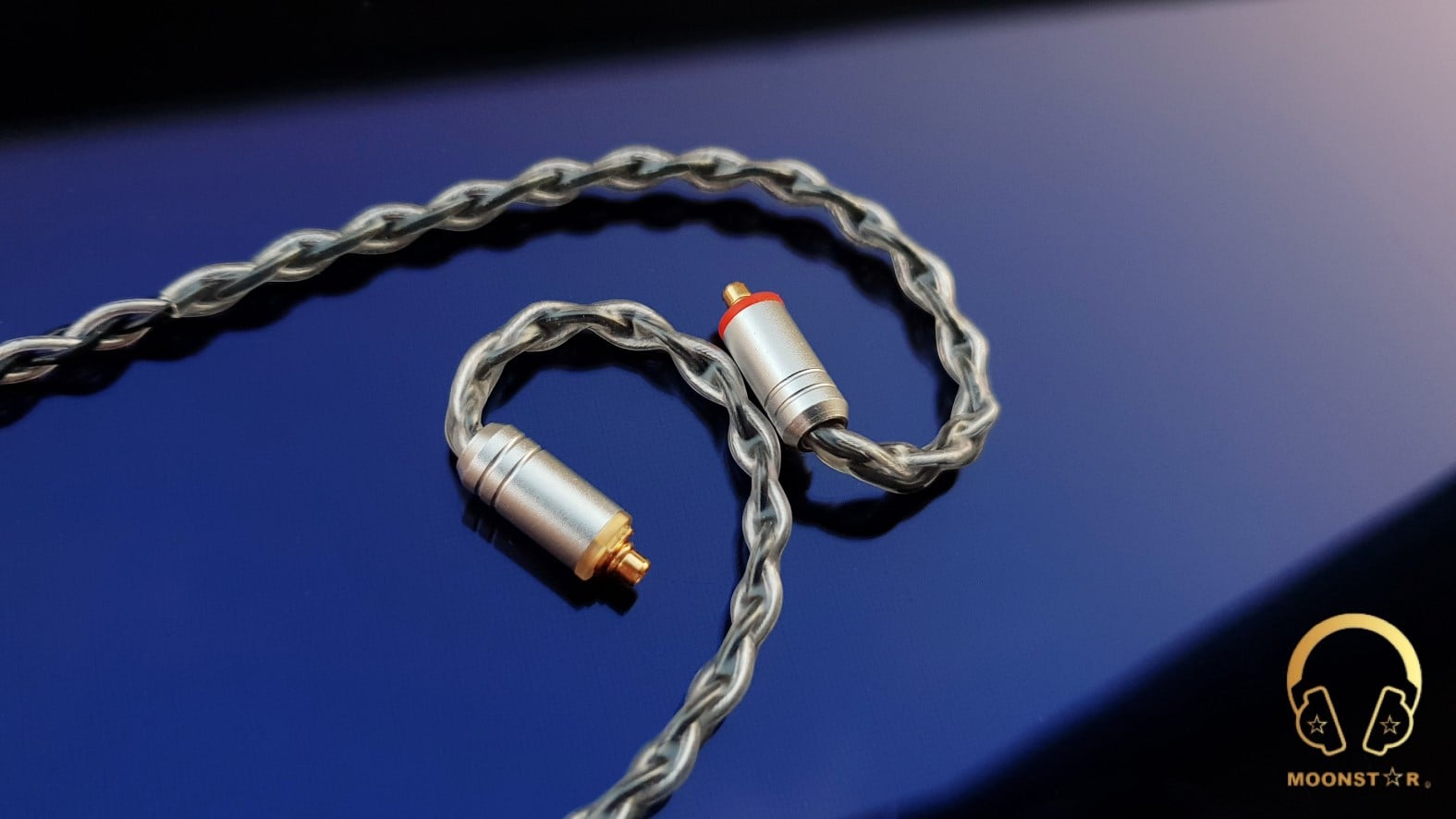 The cable sports on both sides heat-shrink ear guides, which are offering an extra comfort.

This cable features also a metal Y-Splitter with a black carbon fiber pattern and a transparent plastic chin slider. 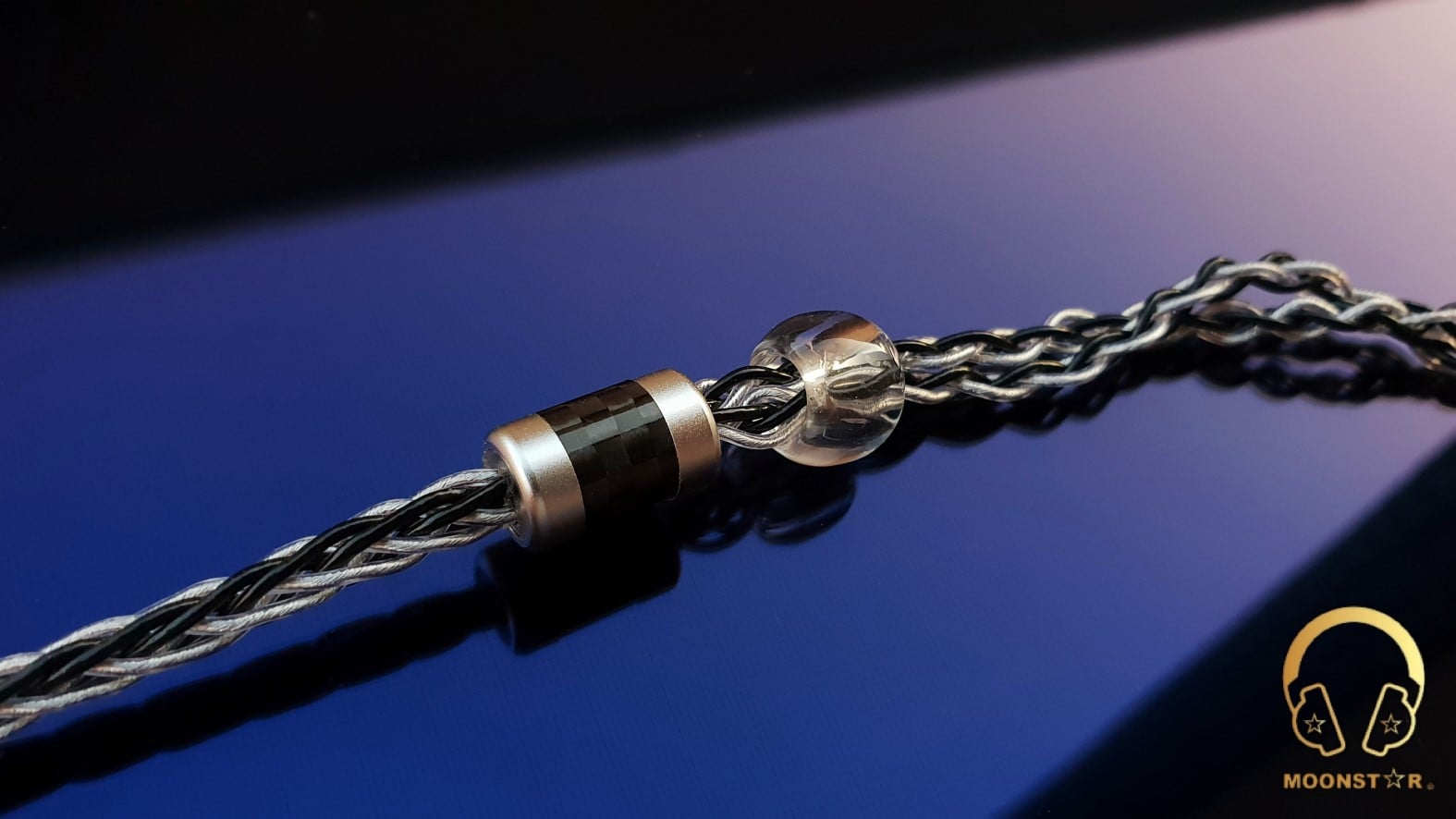 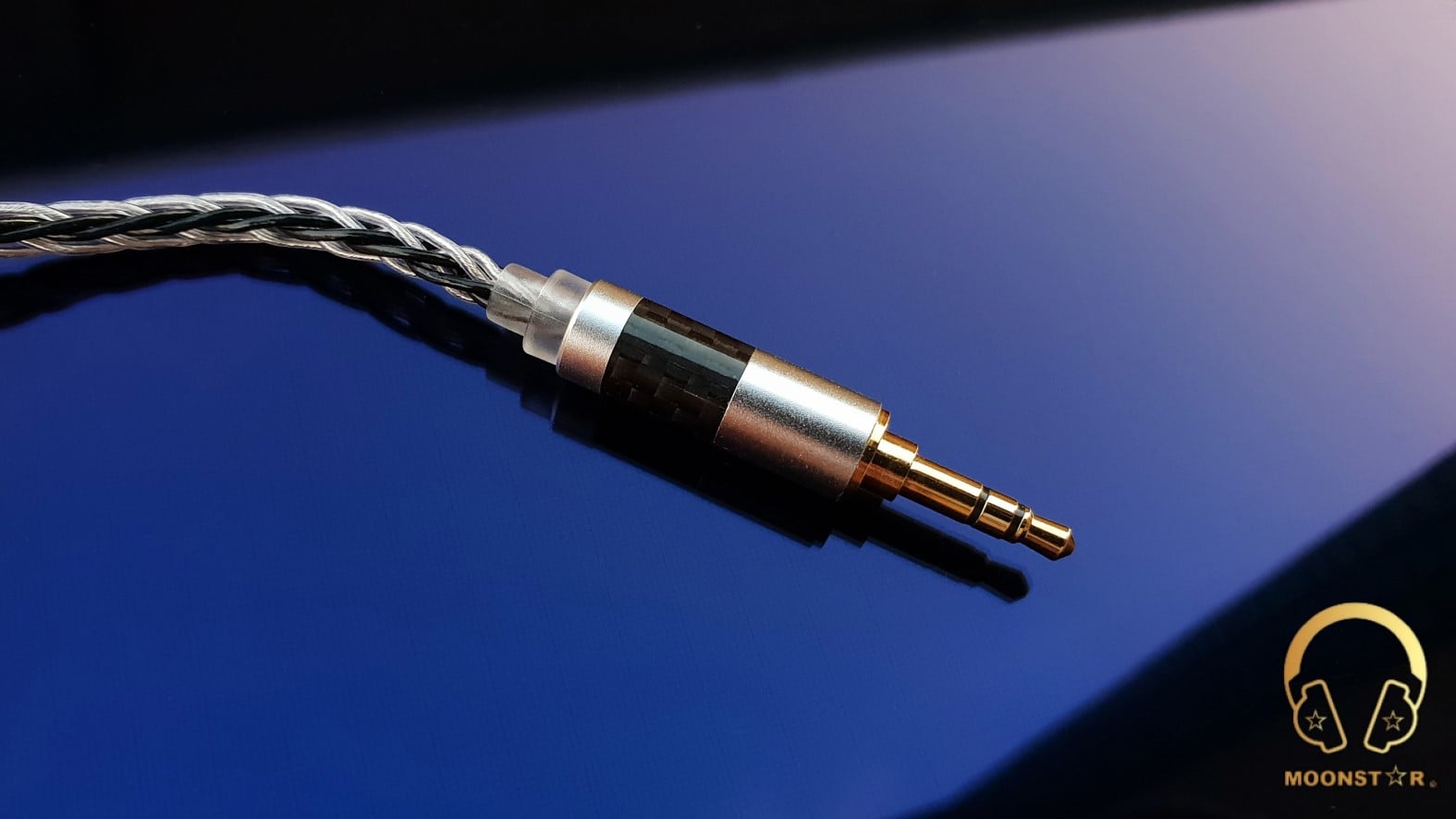 The monitor shell has a larger than average size, but fits quite well in my ears with an average size. The sound isolation, on the other hand, is at an acceptable level, which is quite reasonable for use in public such as bus, subway, train etc.

The Magaosi DQ4 is an IEM with an impedance of that varies between 48 and 54 ohm’s depending of the switch configuration and has a sensitivity of 112dB/mW. It can be driven with relative weak sources like Smartphone’s, Tablets and smaller sized DAP’s, but shows its true potential if you pair it with more powerful sources like a Portable Amplifier or more powerful DAP’s like the QA361 or iBasso DX220/DX150. 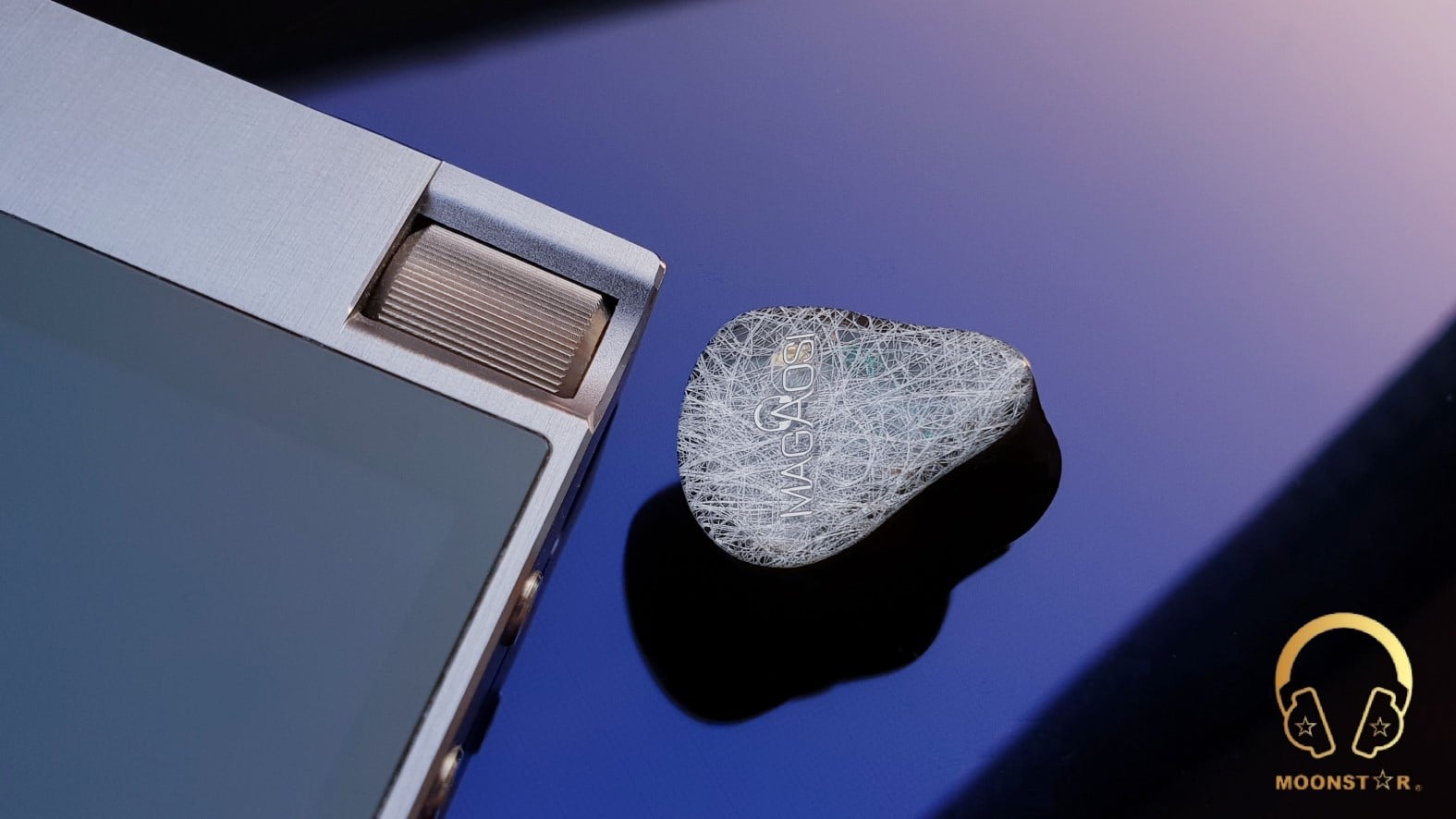 The Magaosi DQ4 is an In-Ear Monitor with 4 different signatures that can be adjusted by using the sound tuning switches.

Those are the following signatures;

In high resolution mode, the sound is neutral and bright, while the mid-range and treble are especially in the foreground. The Low Frequency Enhancement mode is enhancing the bass, while the Voice Enhancement mode is pushing the vocals in the foreground. In the atmosphere mode gives the song a nice 3D effect. This mode is intended to surround the listener while listening to the song.

In this mode the overall sound signature is neutral, clear, bright and highly transparent, while the bass are very fast and controlled.

The subbass has a good depth and average extension. The subbas extension is shorter than in the bass enhancement mode. The midbass hits hard, is tight and fast, which is ideal for fast genres, especially for rock and metal music. Instruments like cross- and snare drums are fast and showing a good intensity, while bass guitars have good detail and speed, except a little lack of thickness.

The midrange of the Magaosi DQ4 sounds neutral, smooth and highly transparent. Male vocals are represented in a clear and detailed way, while they are missing a little bit of warmth and fullness.

This mode is especially successful with instruments which have a bright/neutral tonality such as pianos, violins and flutes. The detail level with instruments like bass guitar or violas is high, while it is missing some fullness and warmth.

The treble quantity, extension and detail are high, while listening to instrument like hi-hats and crash cymbals. The treble area sounds quite airy in this mode. The soundstage of the Magaosi DQ4 is airy and expansive in this mode, while the depth of the stage is on an average level compared to the width. 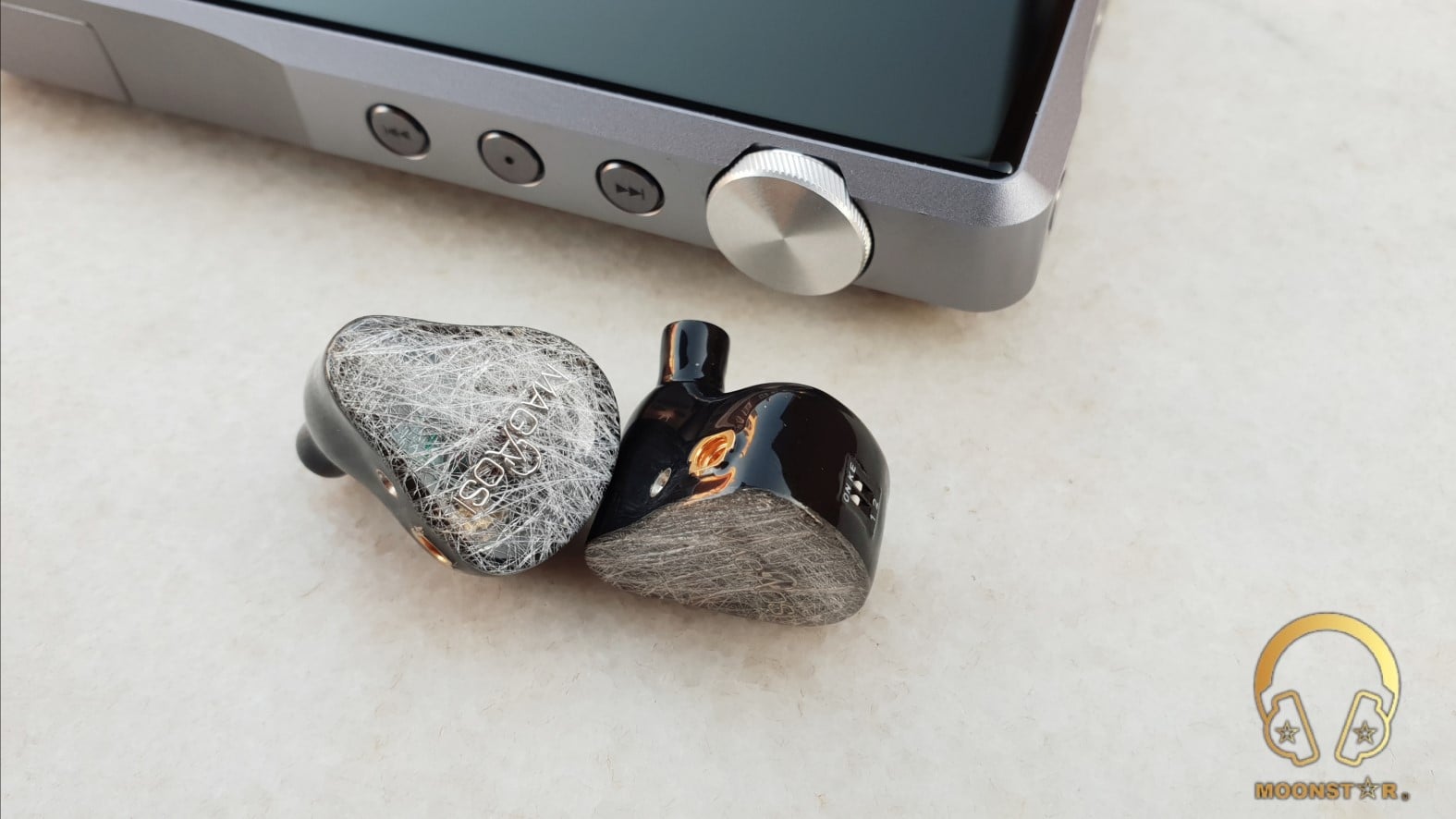 This mode is especially good for those who like more distinctive and deep bass presentation. There’s more emphasis on the bass, than the midrange and treble region. The bass extension, depth and control in the LFE Mode is quite impressive, especially for this price range, while it shows slightly less speed compared to the High Resolution Mode.

The treble has a good level of airiness and extension, while the tonality is in general bright and slightly sharp. This mode is the perfect choice for those who like dominant treble and bass emphasis, which is also ideal for genres like EDM, Trance, POP, etc. 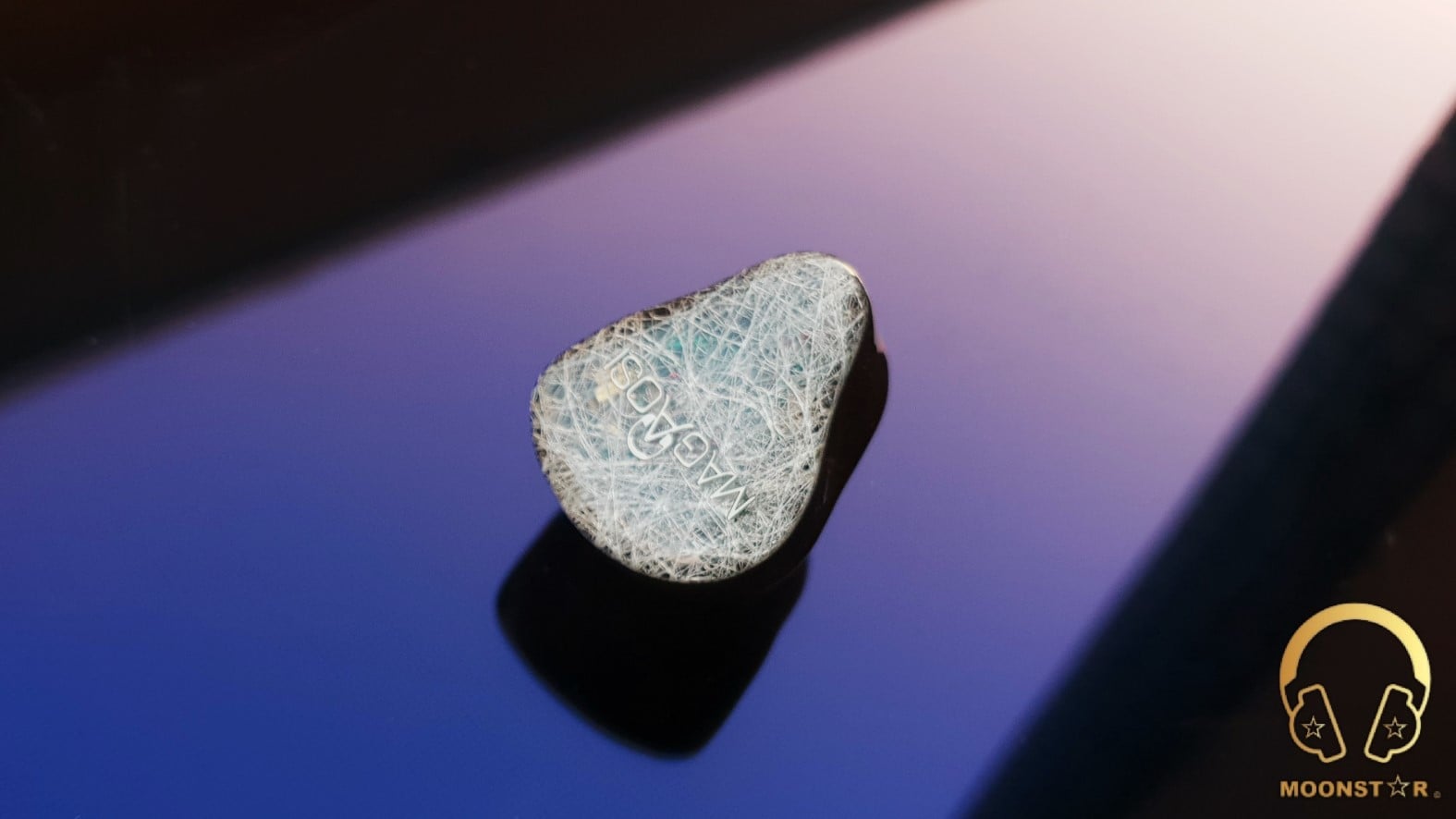 The bass of the Voice Enhancement mode is deeper than compared to the High Resolution mode. The general quantity and depth of the bass is on a good level.

The position of the midrange is distinctive and warmer compared to the other modes. Both male and female vocals have good depth and transparency and are very pleasant to listen to. The instruments do sound as neutral as the high resolution mode and have a slightly warm and musical tonality.

The upper midrange is slightly more recessed compared to the midrange and is pretty transparent and controlled in its presentation.

The treble region is showing a good level of airiness and extension, while the resolution and extension is slightly behind in performance compared to the High Resolution mode.

The Atmosphere Enhancement mode is particularly advantageous for those who love 3D soundstage presentation. The bass of the Atmosphere Enhancement is more full-bodied and voluminous than the other modes. The depth and quantity of the lower frequency regions are quite good and the midrange sounds full and slightly warm, similar to the vocal boost mode. The midrange is in general a bit recessed. The treble and upper midrange have good detail and extension.

The following comparisons are made in the “Voice Enhancement” mode which is the most balanced tuning of all combinations.

The Oriolus Finschi is slightly superior in terms of subbass quantity and depth.

The midbass of both of IEM’s have a similar moderate emphasis and are soft in its character. The Magaosi DQ4 has the upper hand in terms of bass speed and tightness.

The midranges of both In-Ear Monitors are slightly recessed airy and fairly neutral. The lower midrange tonality of both IEM’s are pretty similar and are more successful in terms of clarity and detail, then the performance of its depth and fullness. 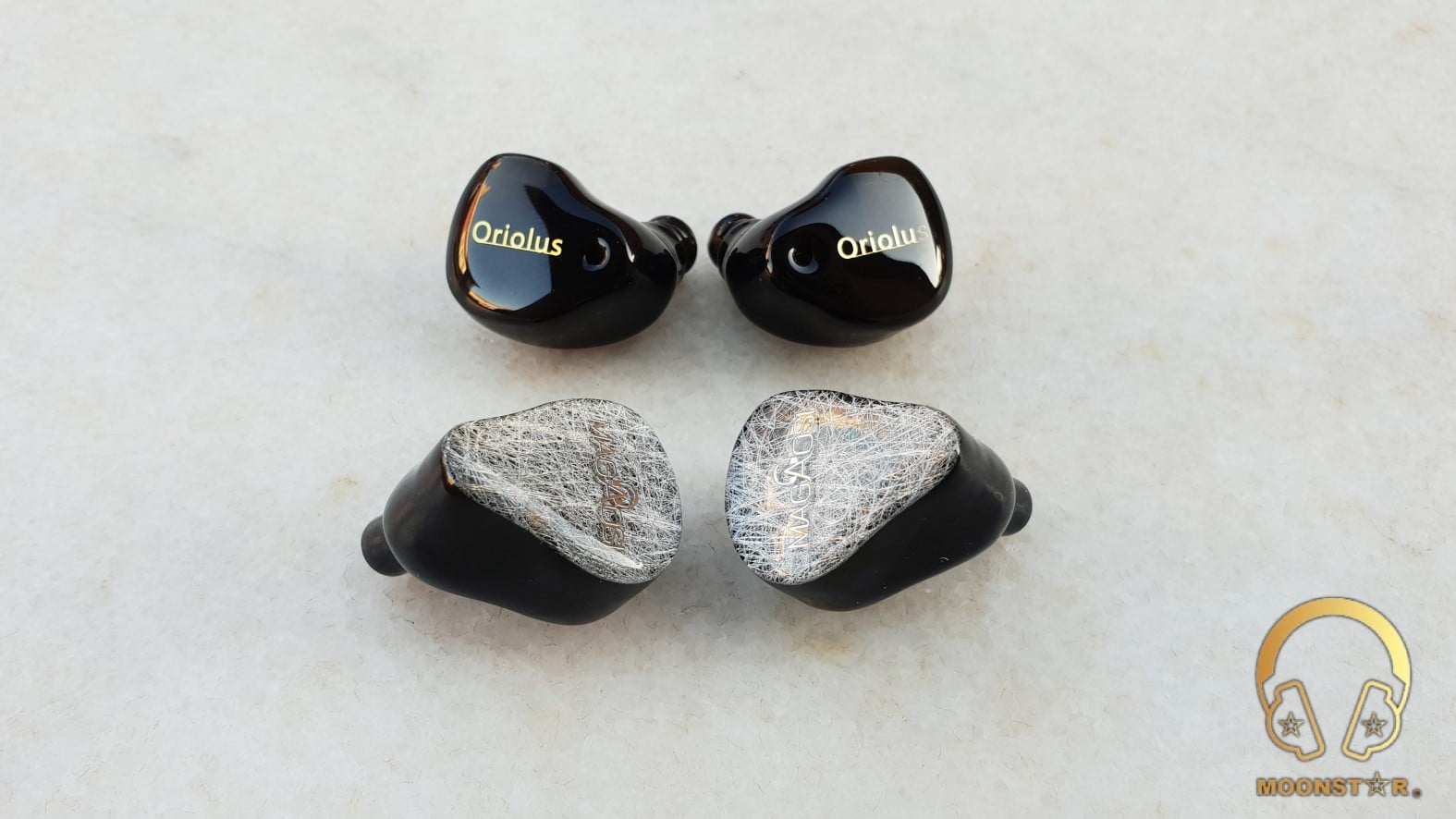 Oriolus Finshi’s treble performance is slightly behind the Magaosi DQ4 in terms of extension, quantity and sparkle. The treble region of the Oriolus Finschi sounds more controlled in cost of detail and extension.

The soundstage of the Magaosi DQ4 is more successful in terms of depth and width.

The Shozy Neo CP is a slightly warmer than neutral sounding In-Ear Monitor with an upfront midrange presentation, which is musical and detailed. The bass of this IEM is fast and fairly solid, the upper midrange is lightly pronounced, while the treble is slightly recessed and forgiving. 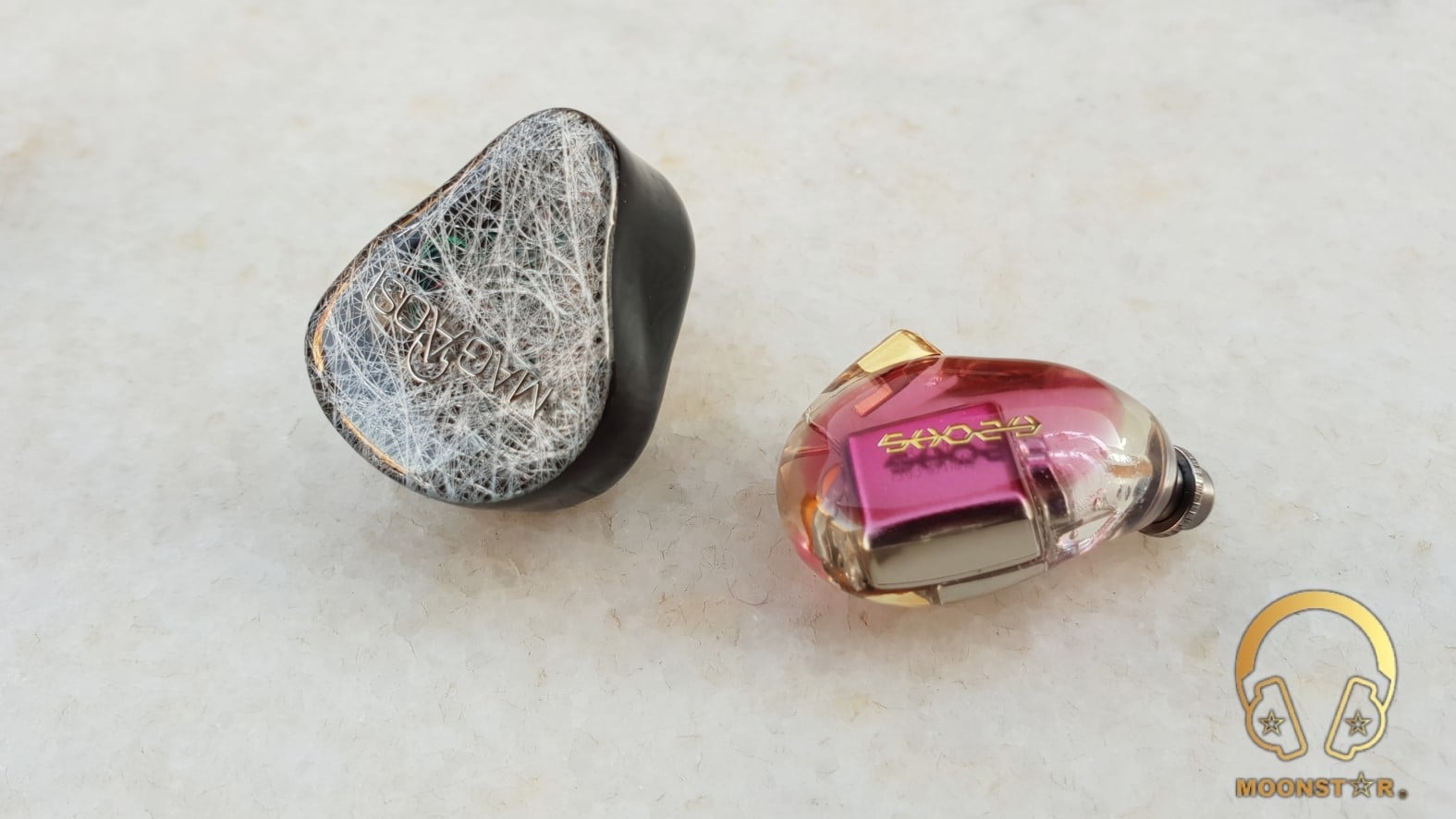 The upper midrange of the Shzoy & Neo CP sounds more controlled, while the Magaosi DQ4 has the upper hand in terms of detail and extension.

The treble range of the Shozy & Neo CP is not as fast and pronounced than those of the Magaosi DQ4. The DQ4 IEM is superior in terms of treble detail and extension.

The soundstage of the Magaosi DQ4 is shows more depth and width compared to those of the Shozy & Neo CP. 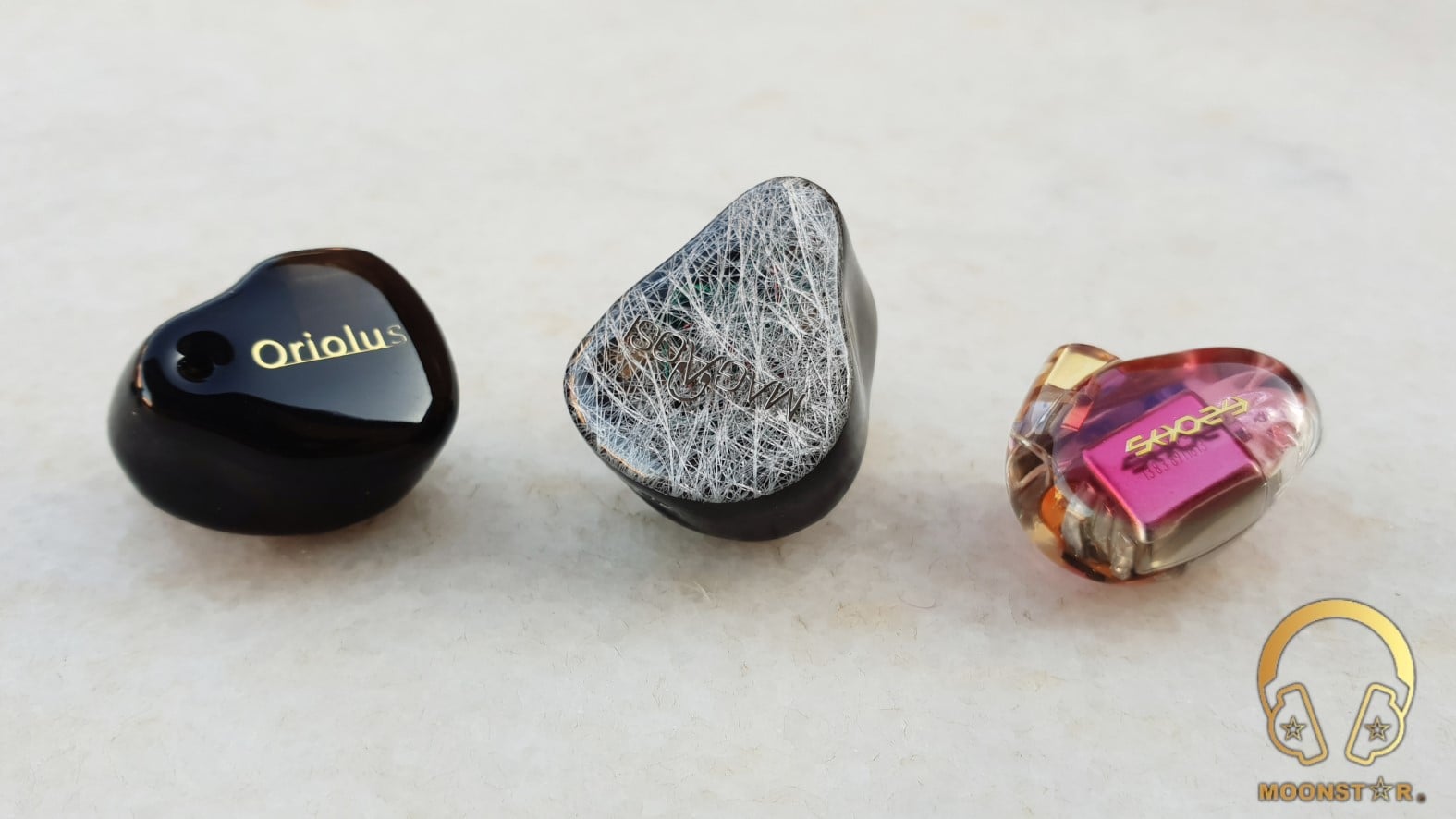 The Magaosi DQ4 is a true chameleon in terms of sound tuning abilities. The 4 different sound tuning modes are able to give a sound signature that is suitable for each type of music, while the beautiful faceplate design and the stock cable are a nice bonus.