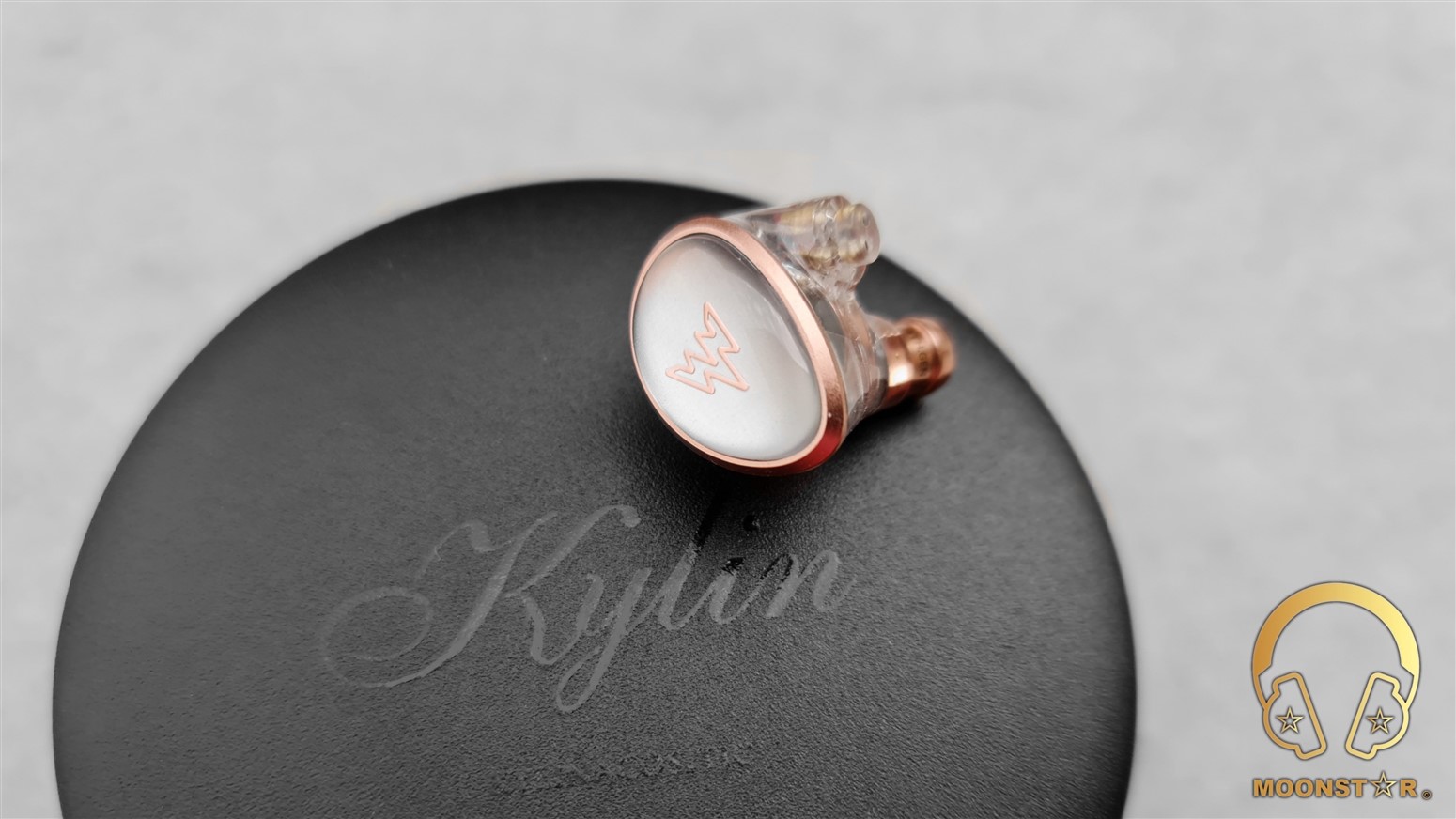 Whizzer is a Chinese brand that was founded in 2016 with the focus to design and create attractive portable audio products like In-Ear Monitors (Haydn A15 Pro, HE03), True Wireless Bluetooth Earphones (Whizzer TP1 & B7) Professional Cable Accessories.

The Whizzer Kylin HE01 is an In-Ear Monitor that features the companies 4th Gen Bright Series Dynamic Driver with a Diameter of 10.2mm and comes with a Hand Braided 4 core detachable cable. The Kylin HE01 features also the so called HDSS Acoustic Filtering System that is a patented acoustic technology that is based on a combination of an alloy duct + multi layers of special filter screen to improve the sense of density and transparency of the sound. 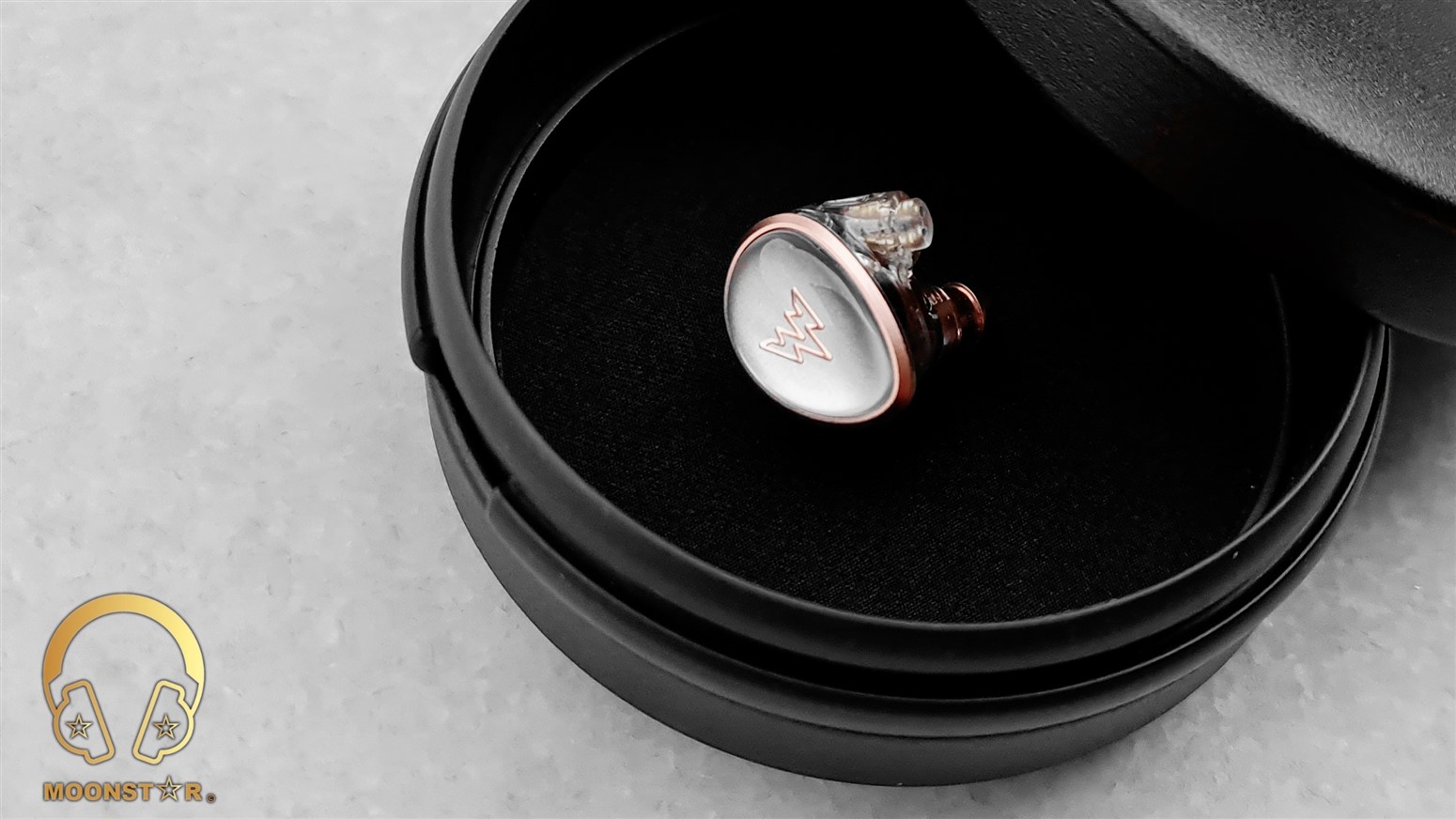 I would like to thank Whizzer for providing me the Kylin HE01 IEM sample for review purposes. I am not affiliated with Whizzer beyond this review and these words reflect my true and unaltered opinions about the product.

The actual price for the Kylin HE01 is about 70,34 USD and can be purchased from the link below;

The Whizzer Kylin HE01 came in stylish box in black color that was wrapped with a black cardboard sleeve that sports some product related brandings & logos. 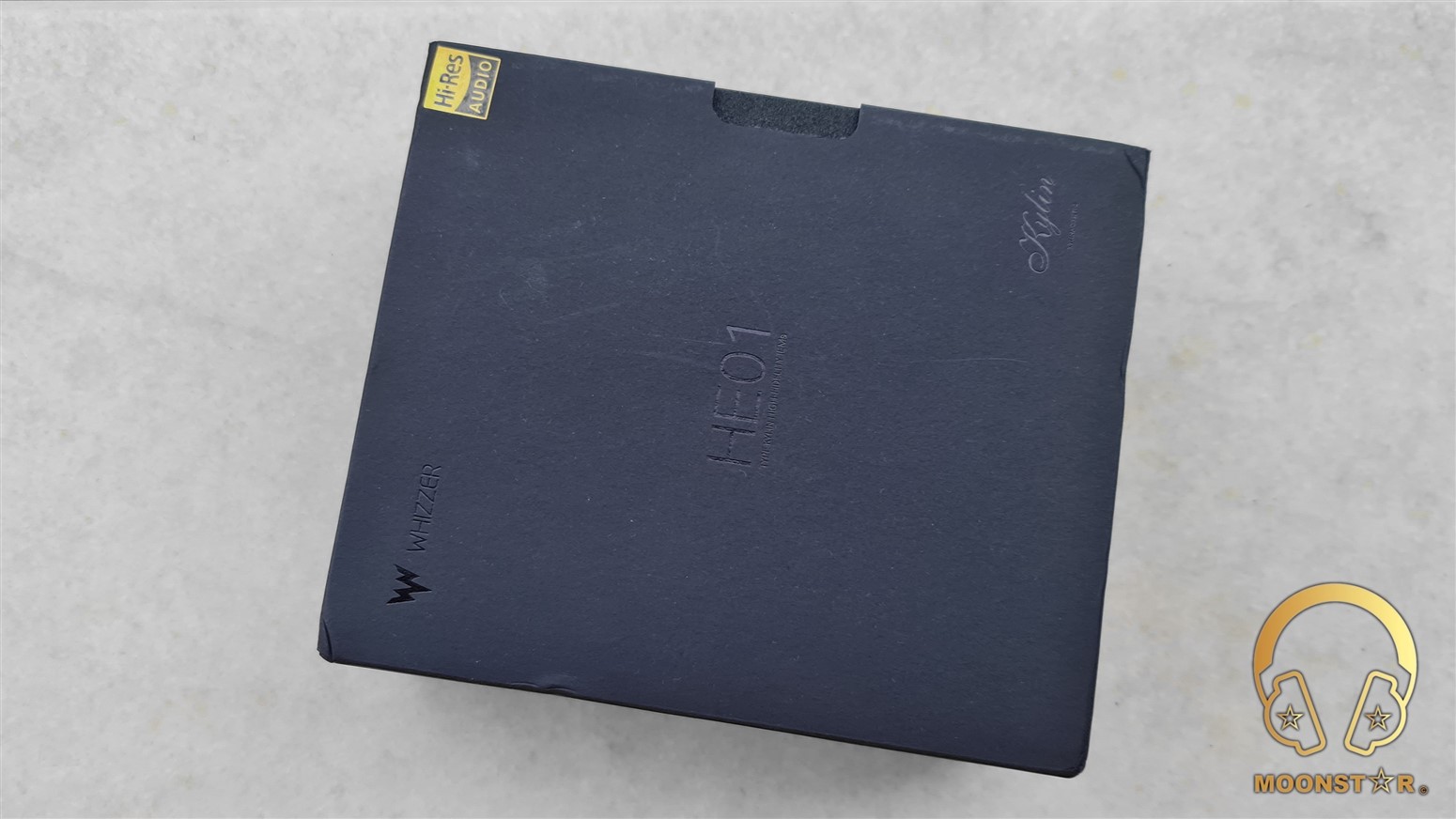 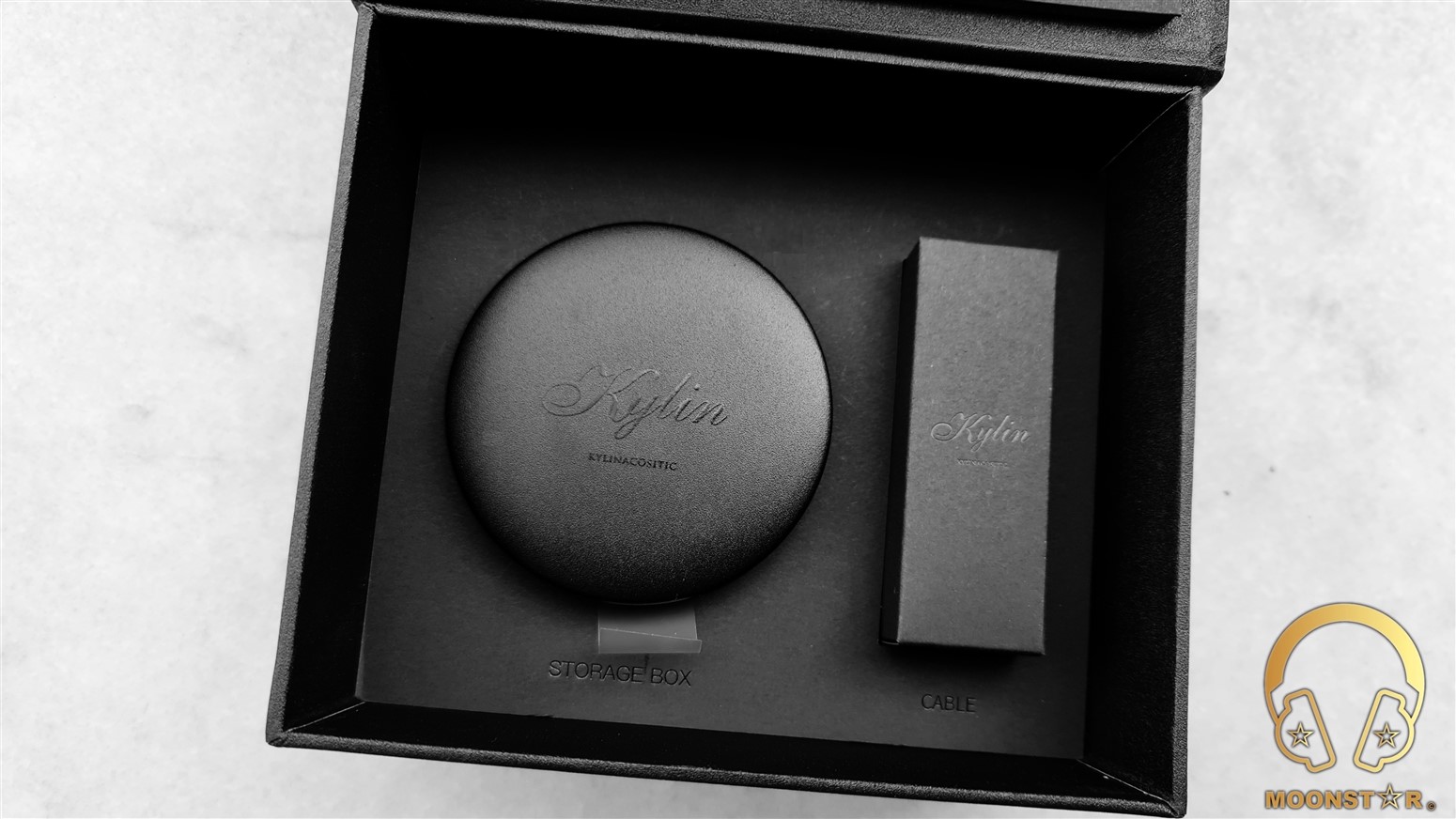 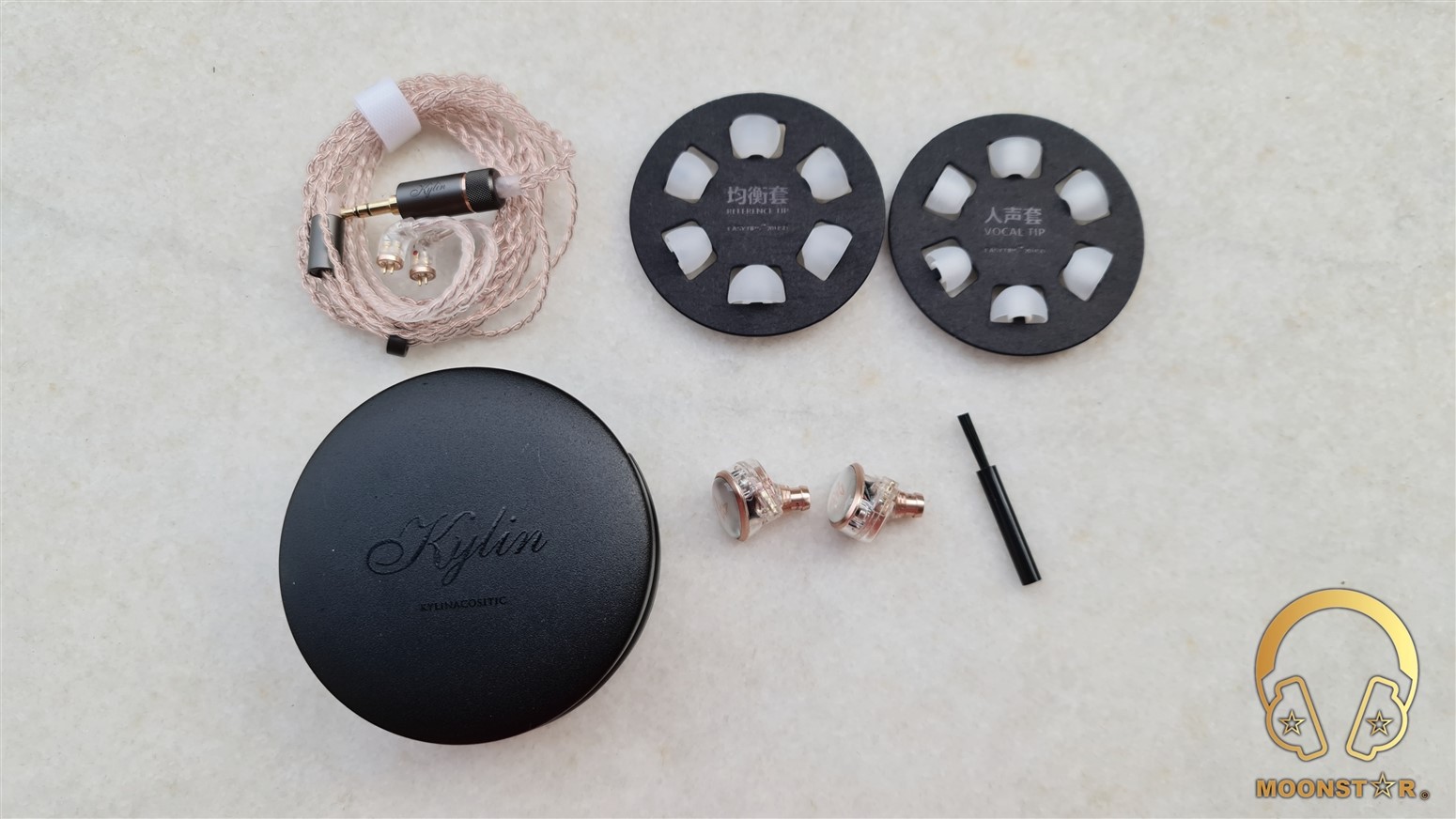 The Whizzer Kylin HE01 has a beautiful looking monitor shell made of a transparent actinic resin material that features some nice metal frame elements in copper color. The monitors are small & lightweight which makes them ideal to for the use with ear that do have a small ear chonca.

On the front of the monitor shell that we call faceplate is the Whizzer brand logo in copper color. Outside of the faceplate is a metal frame in the same color that looks very stylish and attractive. 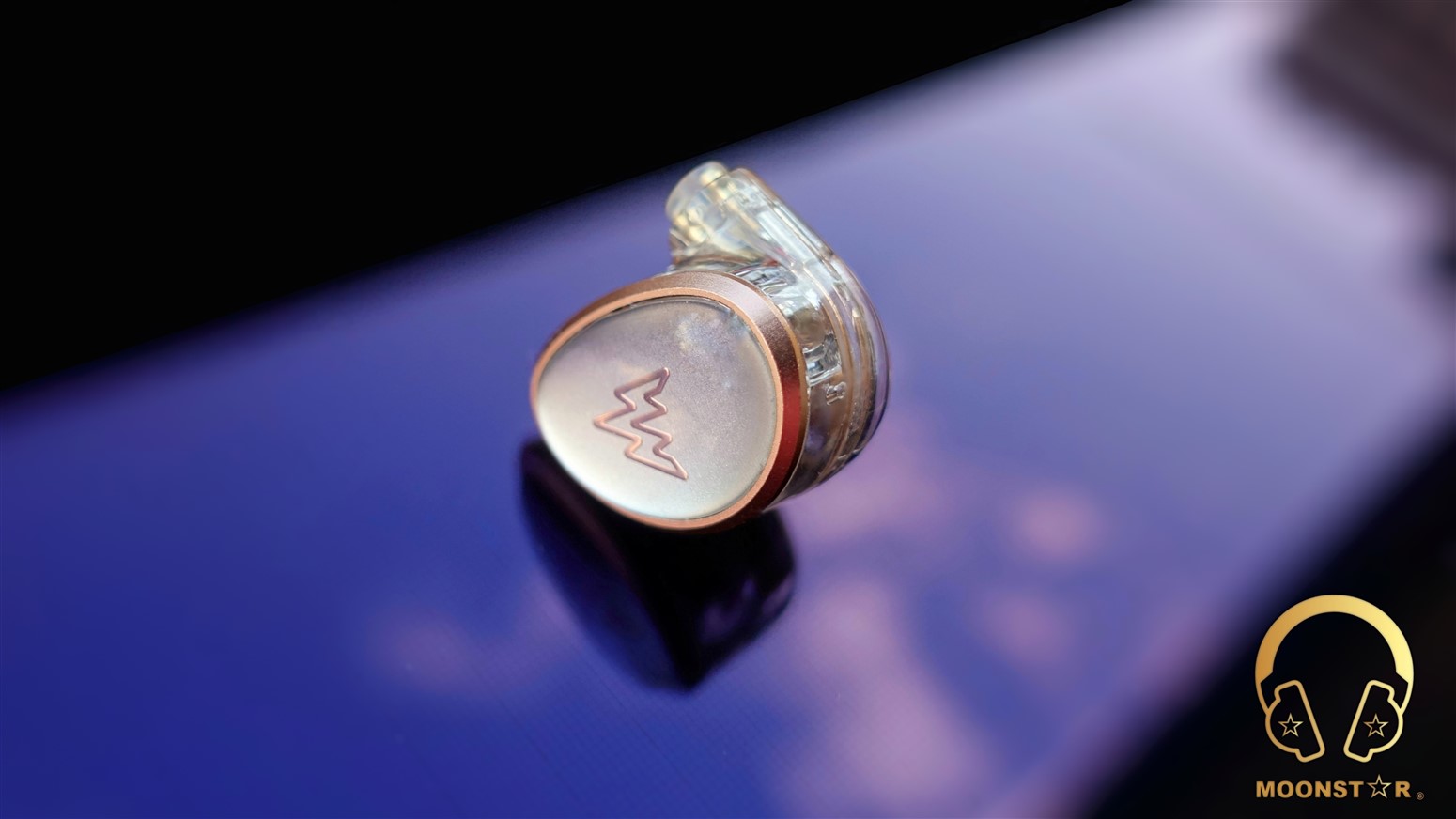 At the rear side of the monitor shell is an opening for the 10.2mm dynamic driver that is visible under the transparent housing that shares also some elements in the same copper color, which adds the Kylin HE01 a gorgeous look. 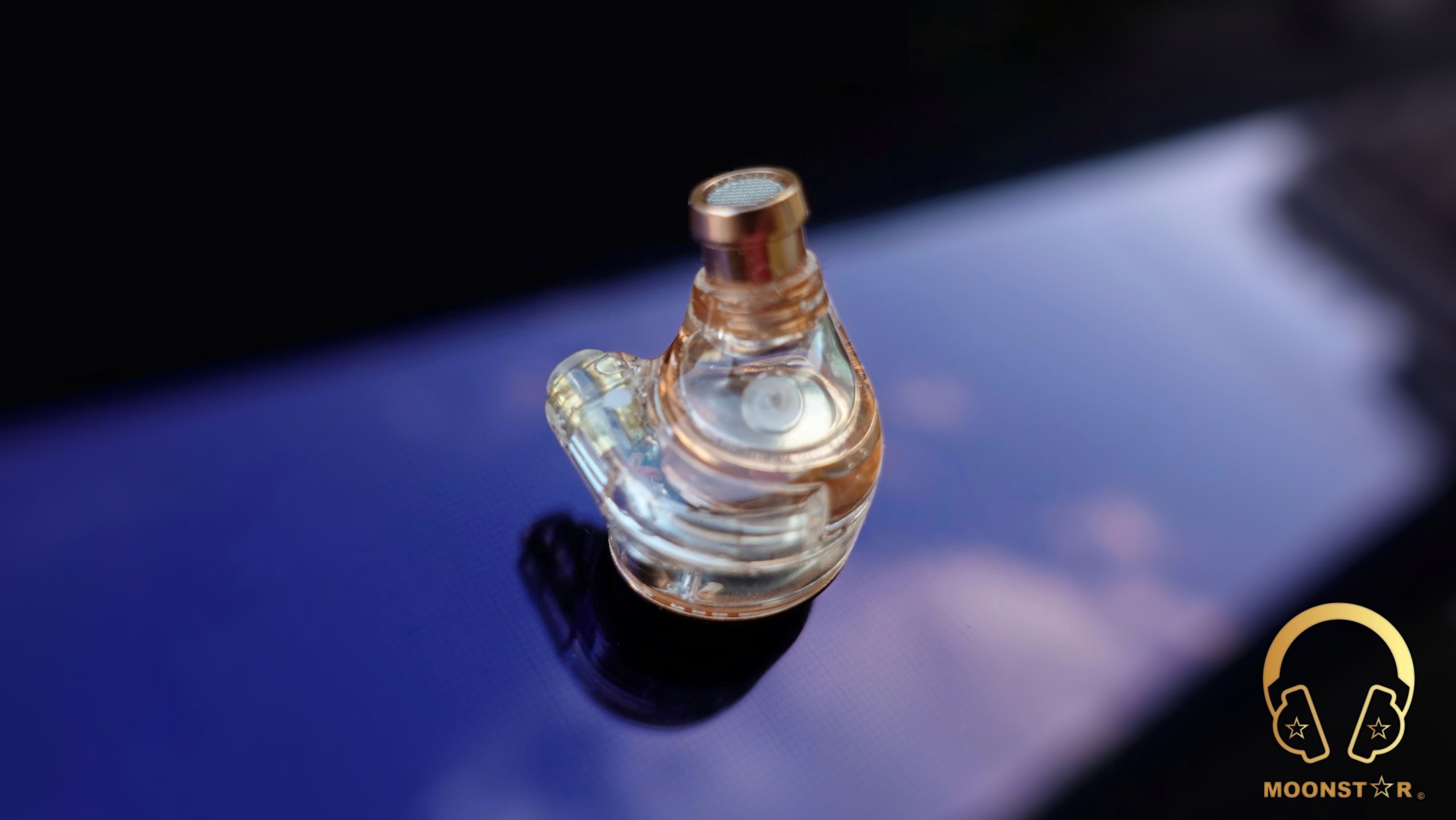 At the backside of the each monitor is a slightly angled metal sound nozzle in gold color, a bass vent (small hole). The right monitor has an R (Right) marking and a red color indicator near the female connector, while the left monitor has only a grey color indictor. 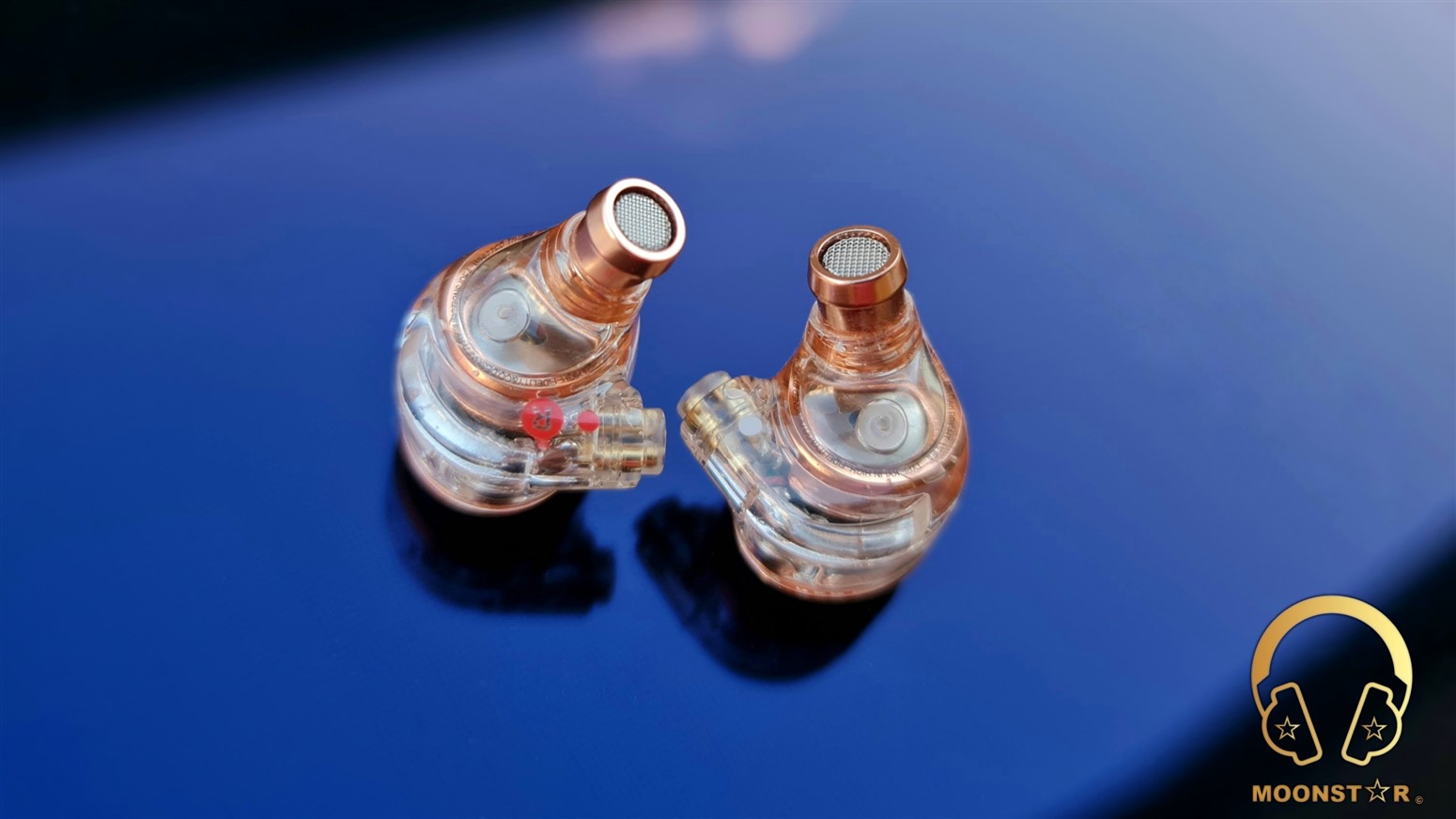 The sound nozzle has a slightly angled profile that ism made of metal that shares the same finish in copper color. 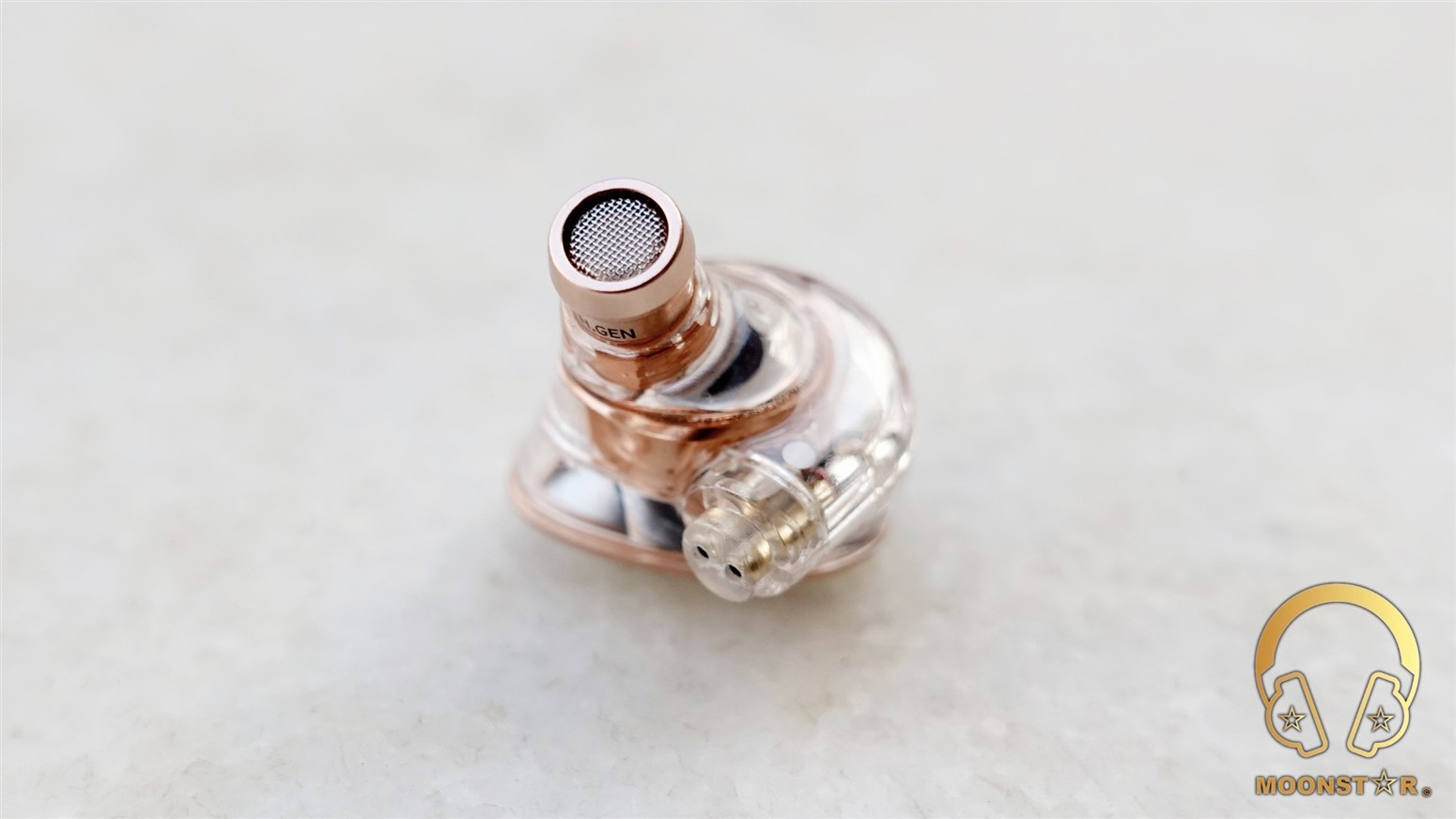 On the top of the nozzle is a fine woven metal mesh to prevent the insertion of strange particles such like dust or ear-wax. 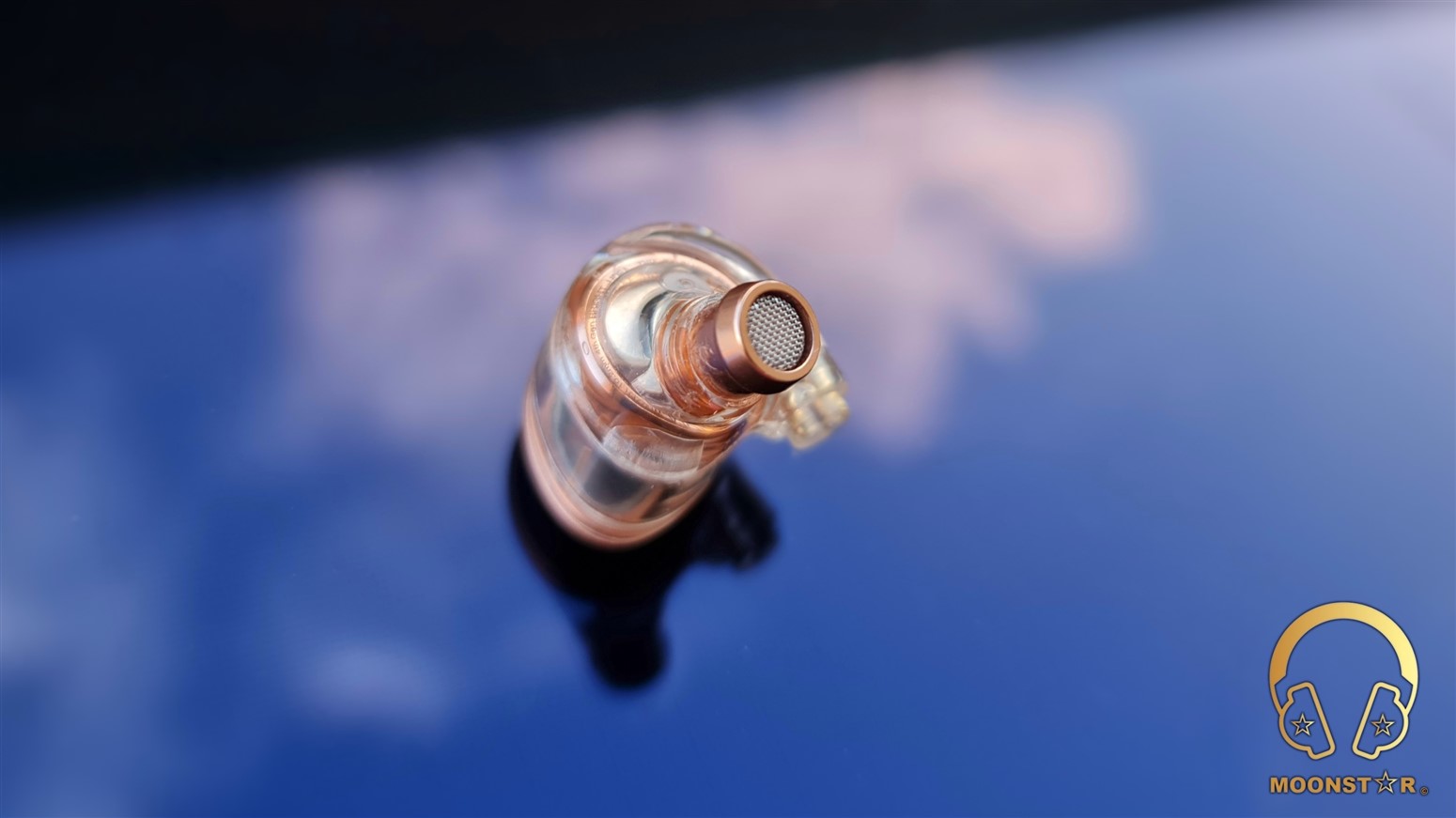 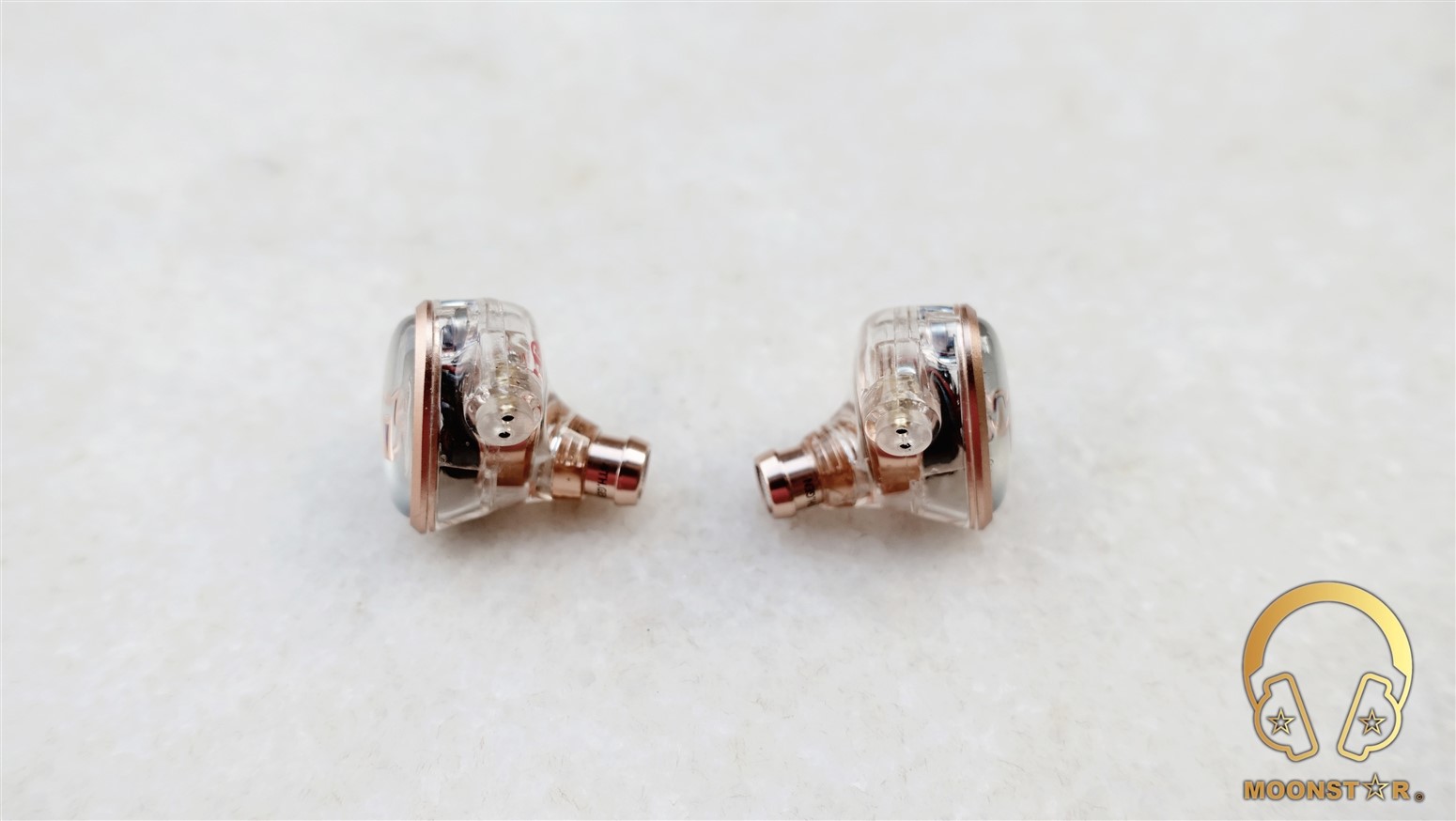 The Whizzer Kylin HE01 comes with a detachable cable that has 0.78mm diameter 2-Pin male connectors. The cable of the Kylin HE01 is a 4 core cable made of 5N purity OFC wire material. It has a braided design and features soft transparent plastic insulation. 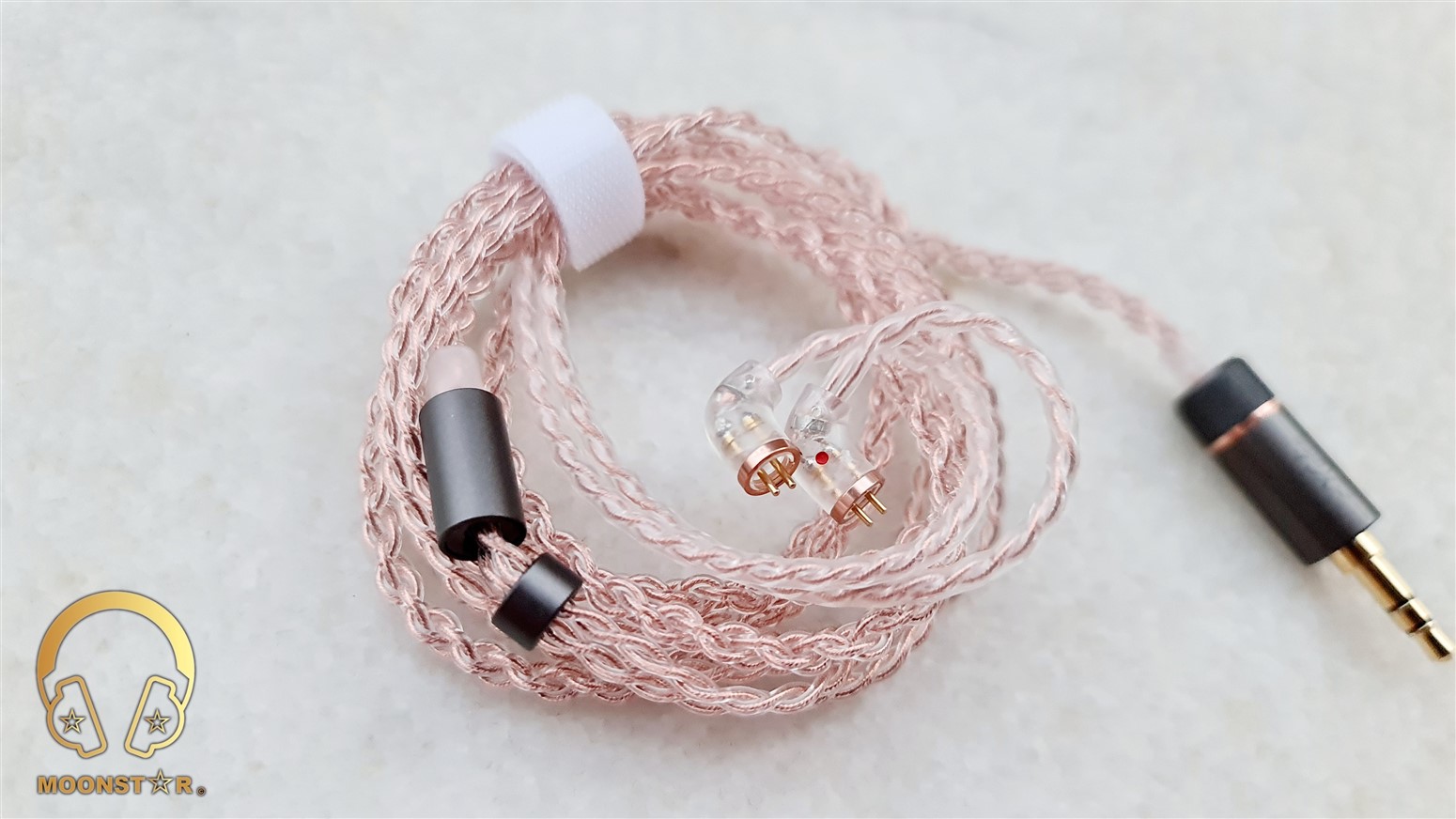 The connectors of the cable do have a transparent plastic housing. The right male connector has a red color indicator. 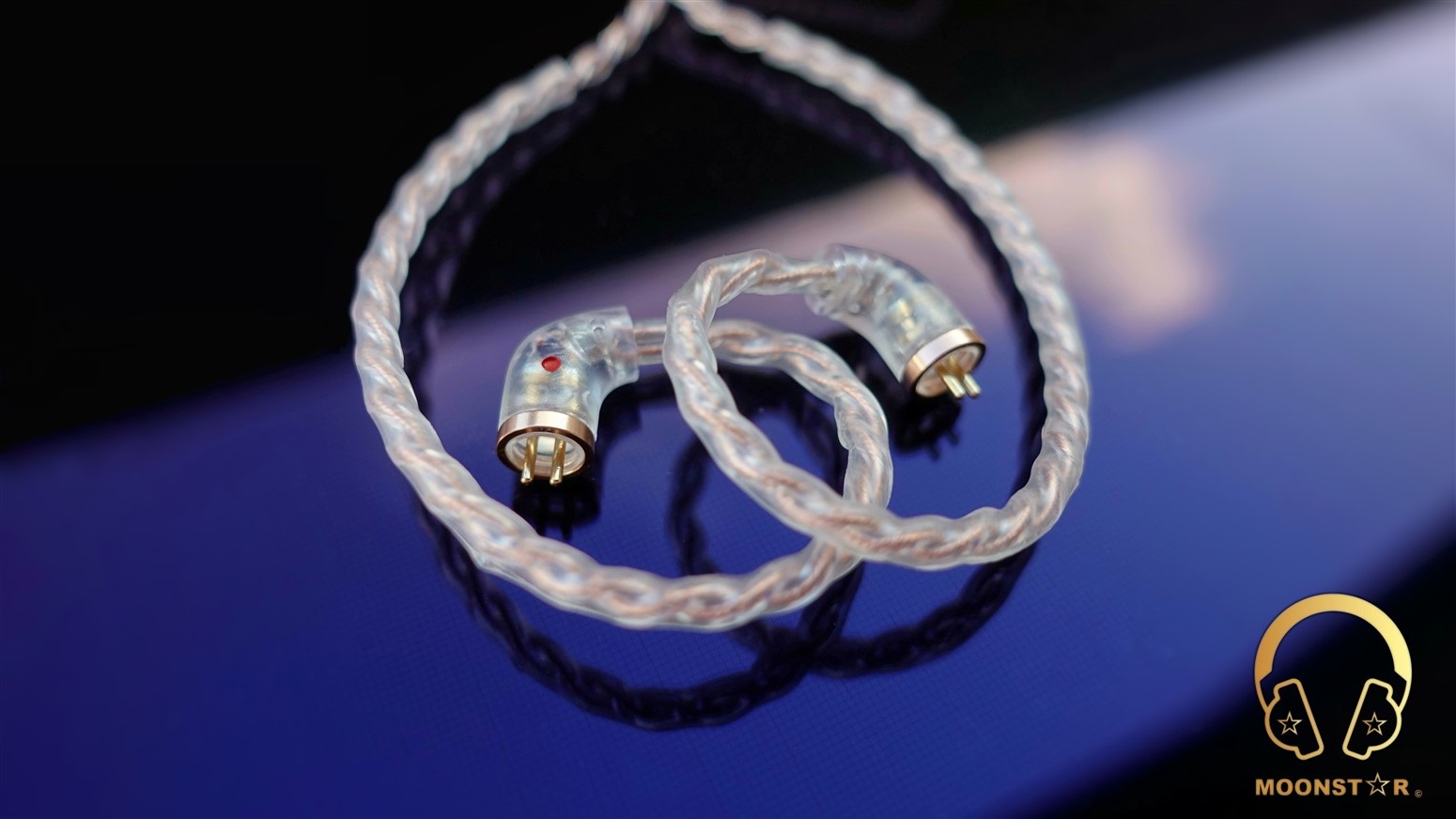 This cable features also a stylish y-splitter and chin slider made of metal in dark grey color. The y-splitter sports the HE01 branding that is printed in black color. 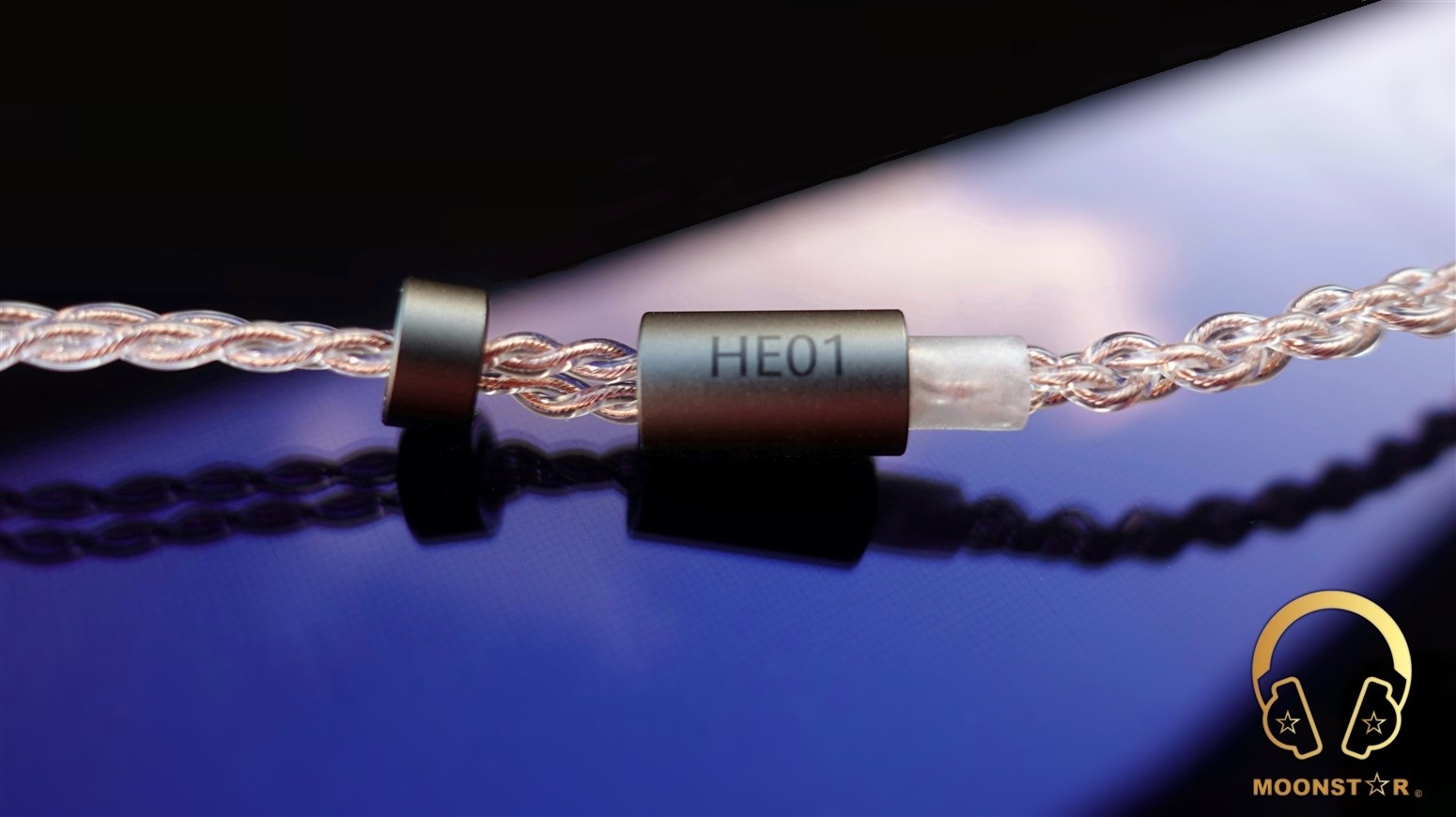 The cable comes with a 3.5mm Single Ended headphone plug which has a strait profiled stylish metal housing with a nice grip that has the Kylin branding on the top. 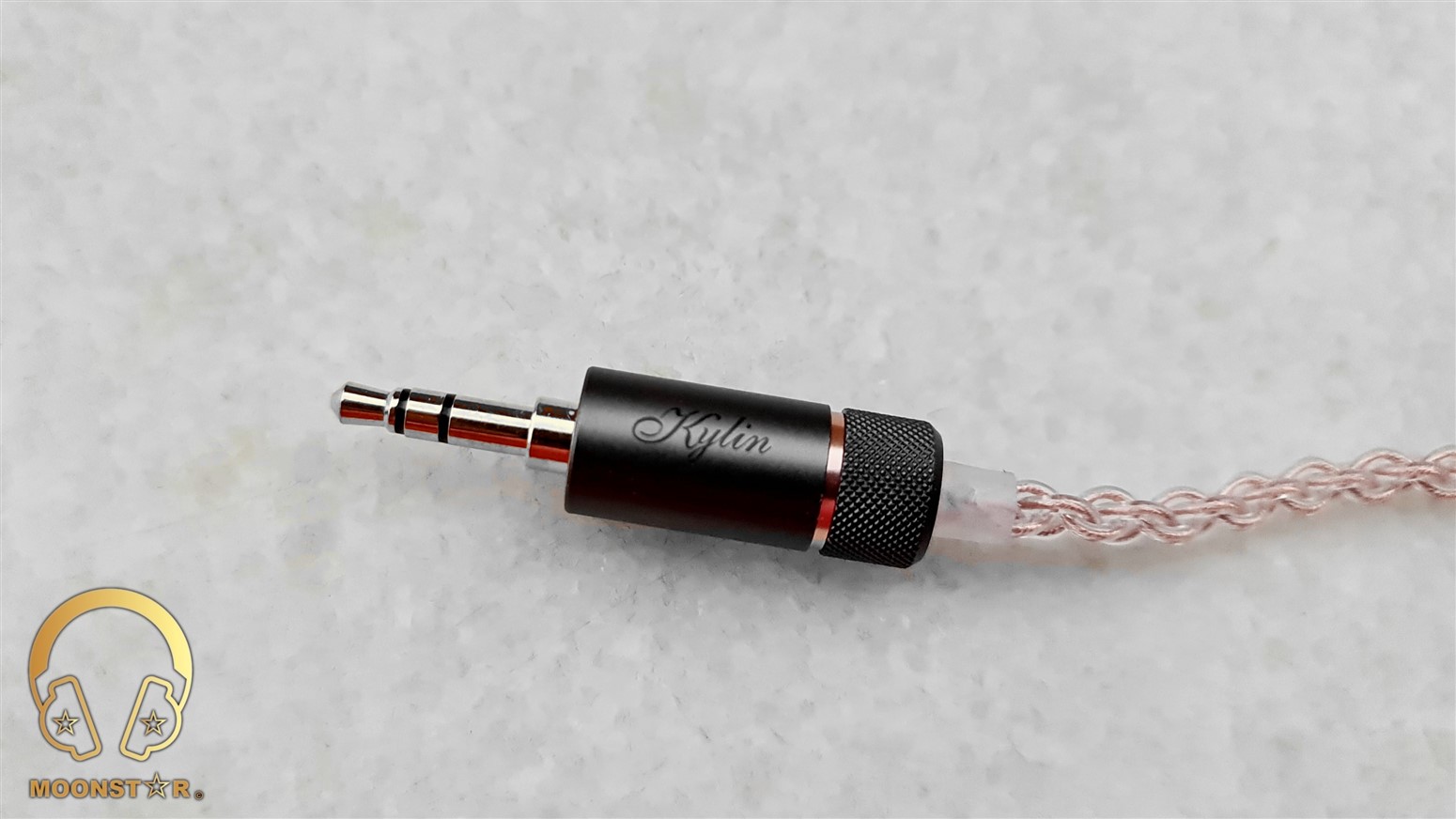 Both the cable and the monitors of the Kylin HE01 do look and feel very robust especially for a product with such a pricing.

The monitor shell of the Whizzer Kylin HE01 has a nice ergonomic shape that makes it very comfortable to wear, even after long listening periods without to hurt my ear concha with an average size.

The noise isolation of this Kylin HE01 is on an average level that is enough to use it in fairly noise environments such as metro, bus or train. 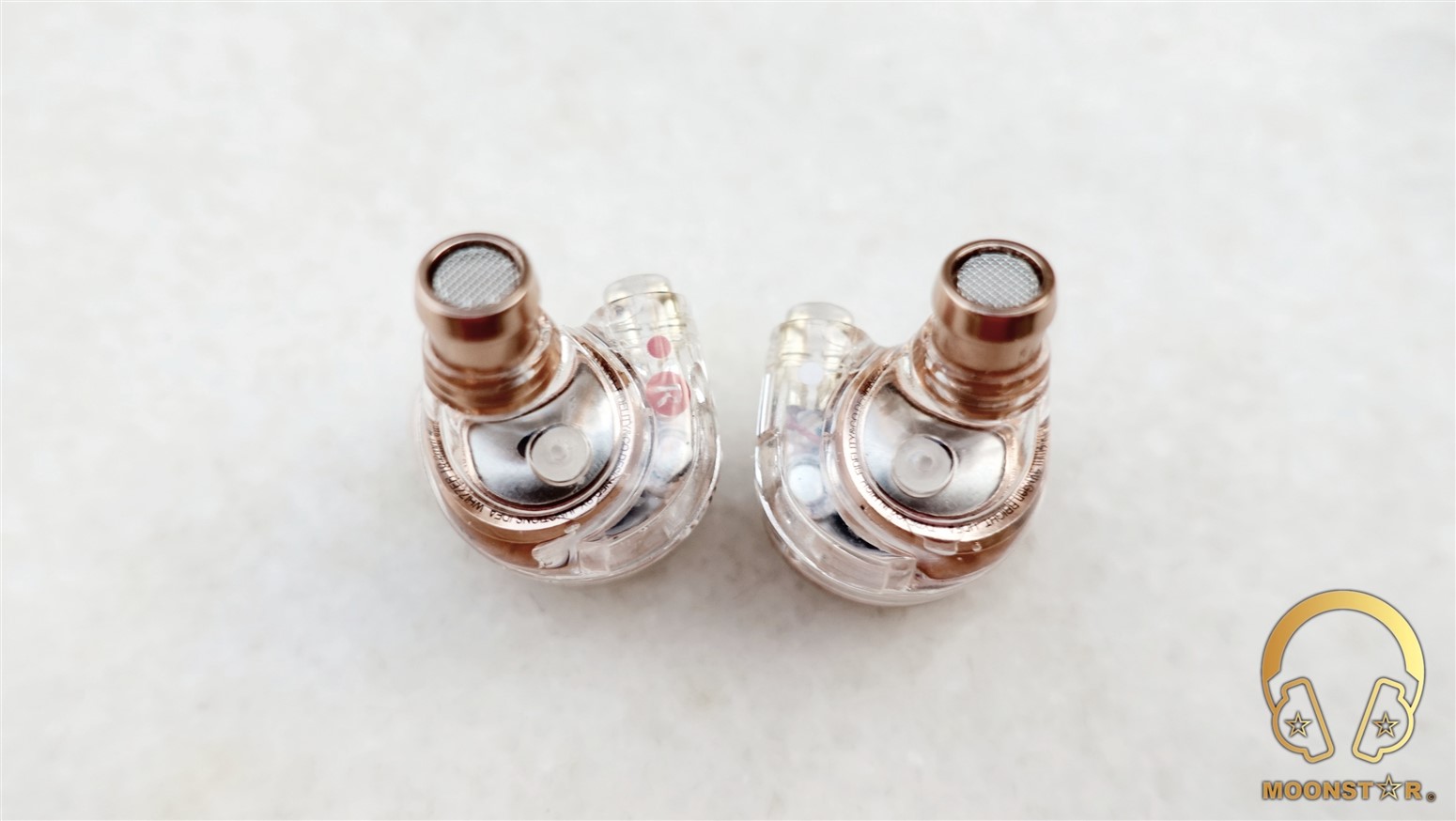 The Whizzer Kylin HE01 has an impedance of 32ohm and a sensitivity of approx 112db that makes it to a relative easy to drive In-Ear Monitor for Smartphone’s, tables or Digital Audio Player (DAP) with a weak amplification. 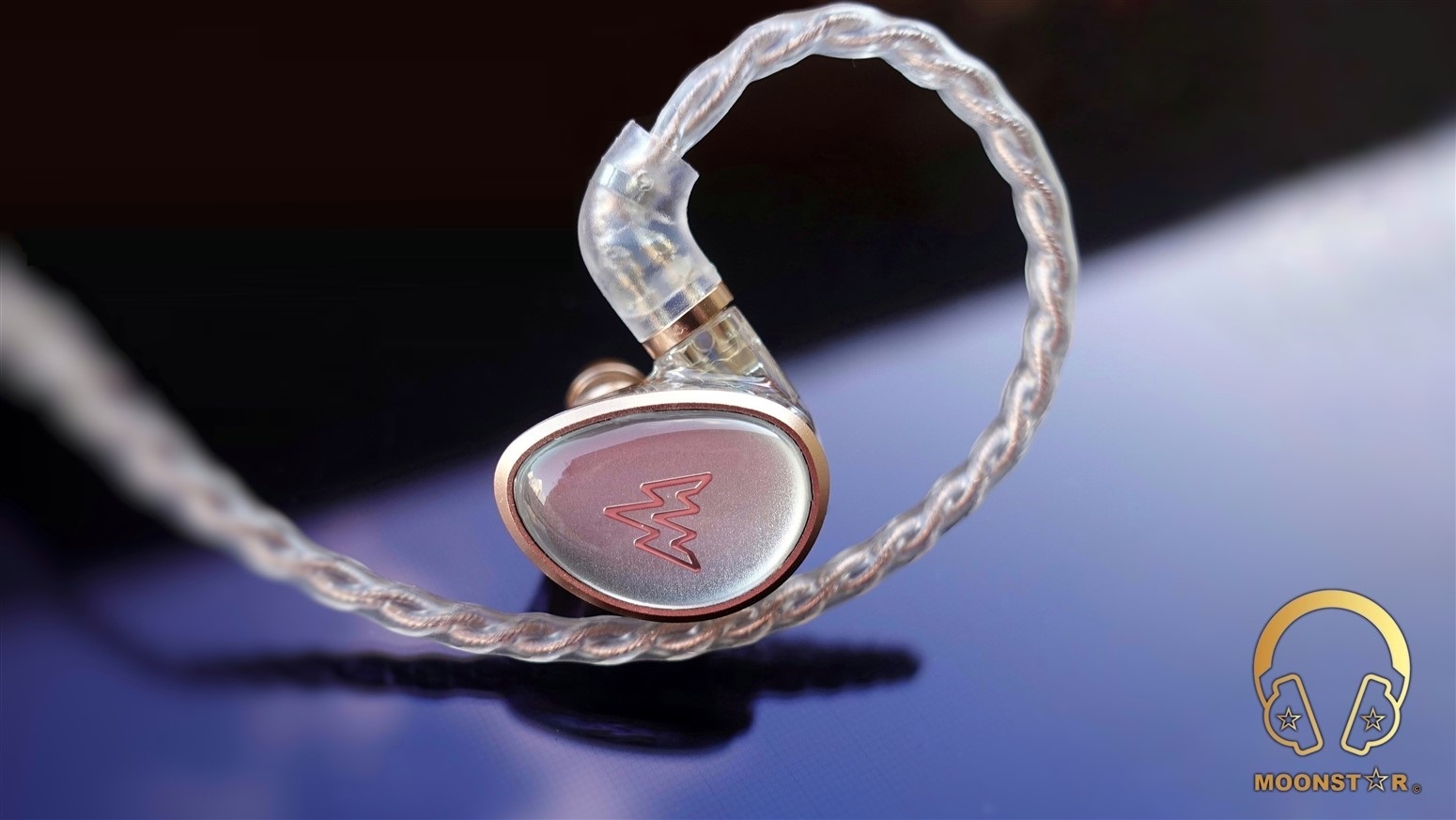 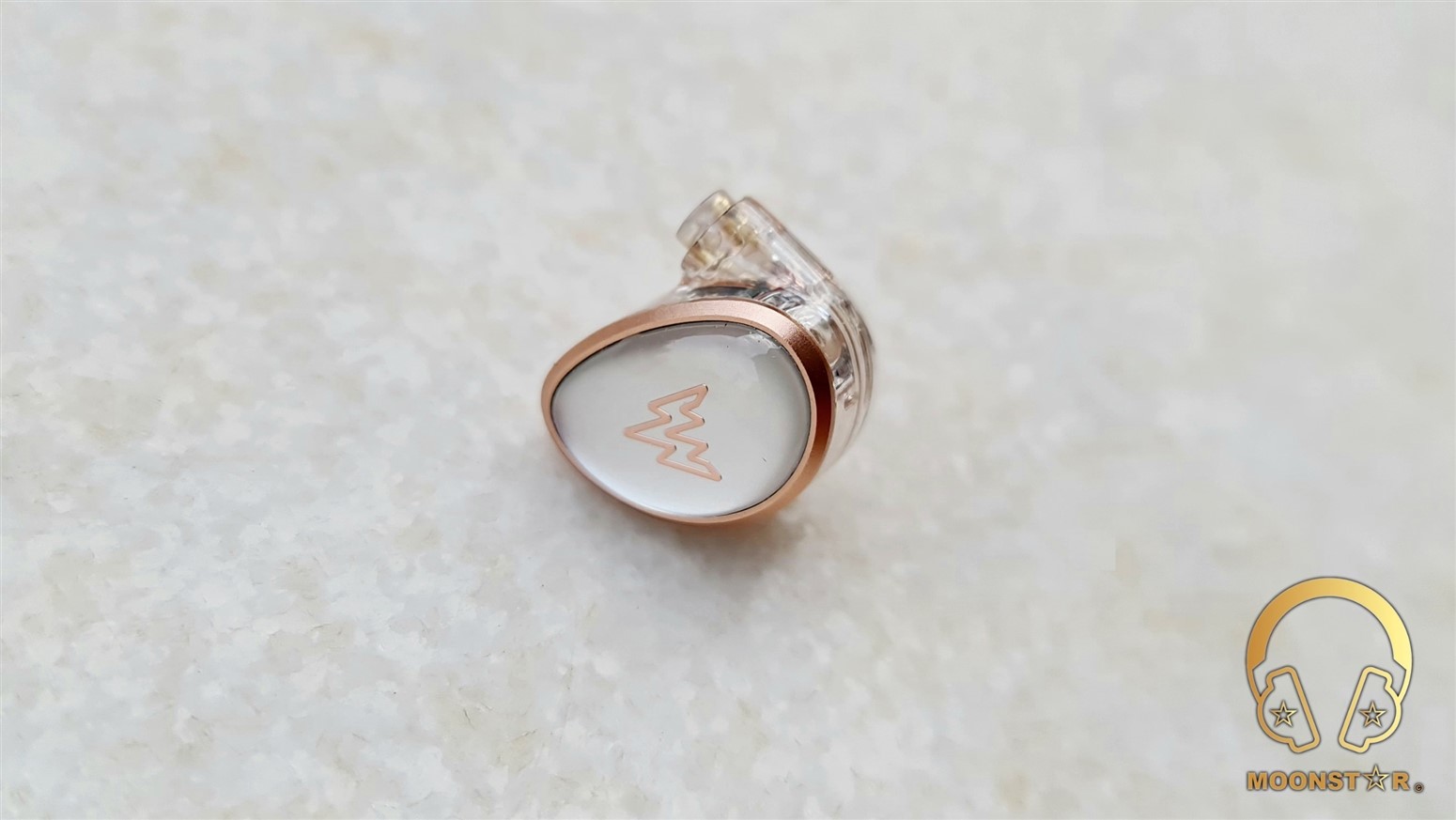 The Whizzer Kylin HE01 is an In-Ear Monitor that has a slightly V shaped sound signature with a tad warmer than neutral tonality. The bass is fairly deep and moderately fast, the midrange is soft and slightly laid back, while the treble range is smooth and controlled.

This review was written after a burn-in period of about 50 Hours. I have used the reference silicone tips, which are included to the package. The main source is the FiiO M11 Pro.

The Whizzer Kylin HE01 shows a fairly deep subbass response, while the extension and rumble is on a moderate level. The Kylin HE01 was able to produce a satisfying sense of subbass rumble while listen to songs Massive Attack’s “Angel” or Lorde’s “Royals”. The subbass intensity will satisfy most users with exception of bass-heads.

The midbass region on the other hand shows a good amount of intensity and fullness. It is impactful and has an average level of speed that is sufficient for most genres, with exception of metal music. The overall quantity and slam effect was pretty good while listen to songs like Joe Blankenburg’s “The Magellan Matrix”, while bass-heads may want slightly more impact and intensity.

String instruments such like bass and acoustic guitars or percussion instruments like kick and snare drums do sound do have a good sense of intensity and depth. 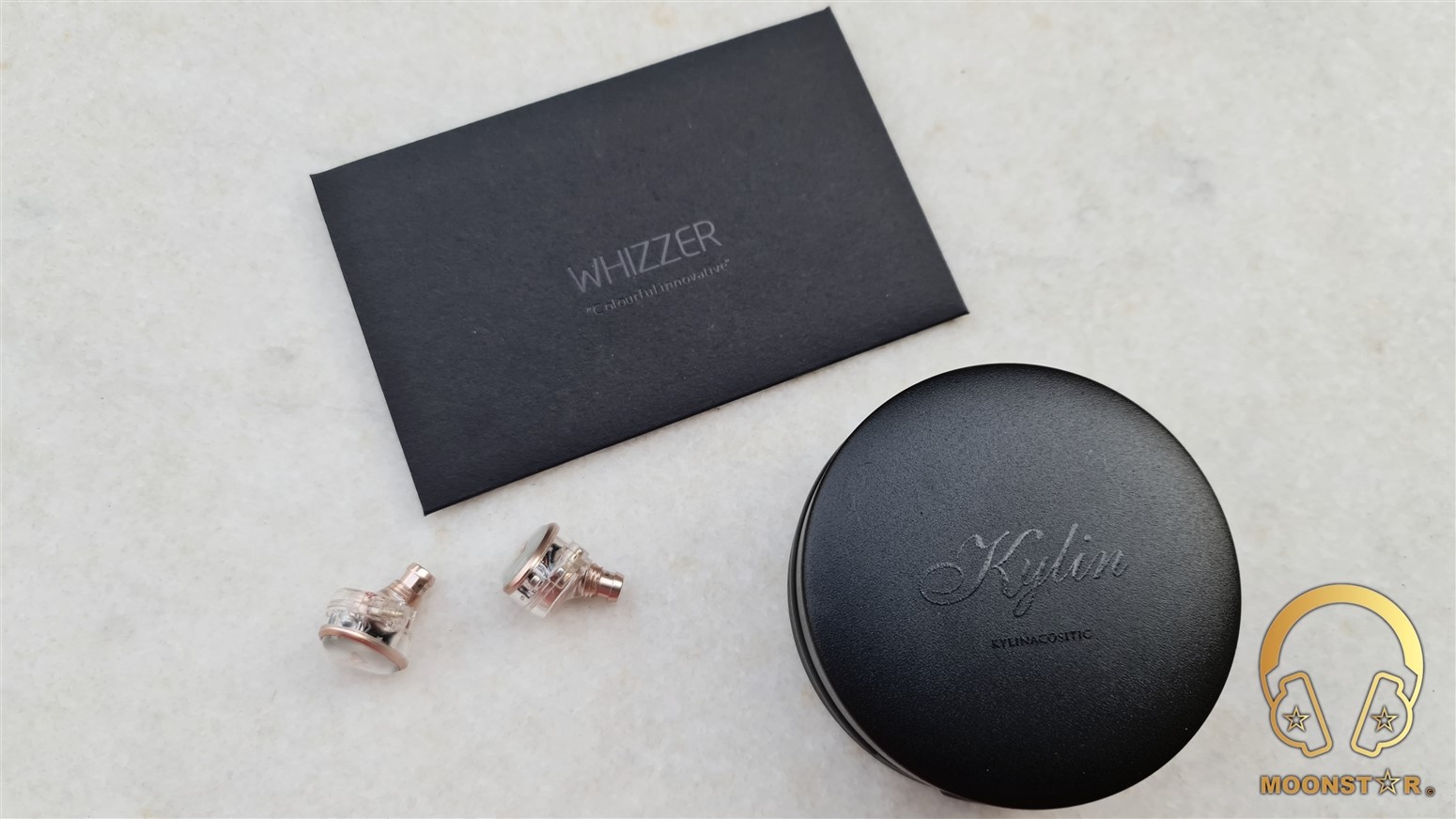 The midrange of the Whizzer Kylin HE01 sounds slightly laid back due to the V-shape sound signature, while the tonality in this area is pretty sweet and warmish. The level of clarity and detail retrieval is on a quite good for a dynamic driver IEM in this price range.

The lower midrange is mildly pronounced and offers an average level of depth and intensity while listen to male vocals that do sound also fairly detailed and emotional. I did not noticed any negative situations muddiness and mixings. The general presentation of the male vocals is soft, full-bodied and lively.

The upper midrange of the Whizzer Kylin HE01 is nicely pronounced and offers a good sense of detail and transparency while listen to female vocals, without to sound shouty or sibilant. The level of transparency and extension of the female voice is on a good level for a product at this price range.

The Kylin HE01 has a slightly warm, fairly smooth and close to natural instrument presentation, with good level of detail and airiness. Moreover, the Kylin HE01 is also pretty successful in the midrange when it comes to the definition and separation of instruments. 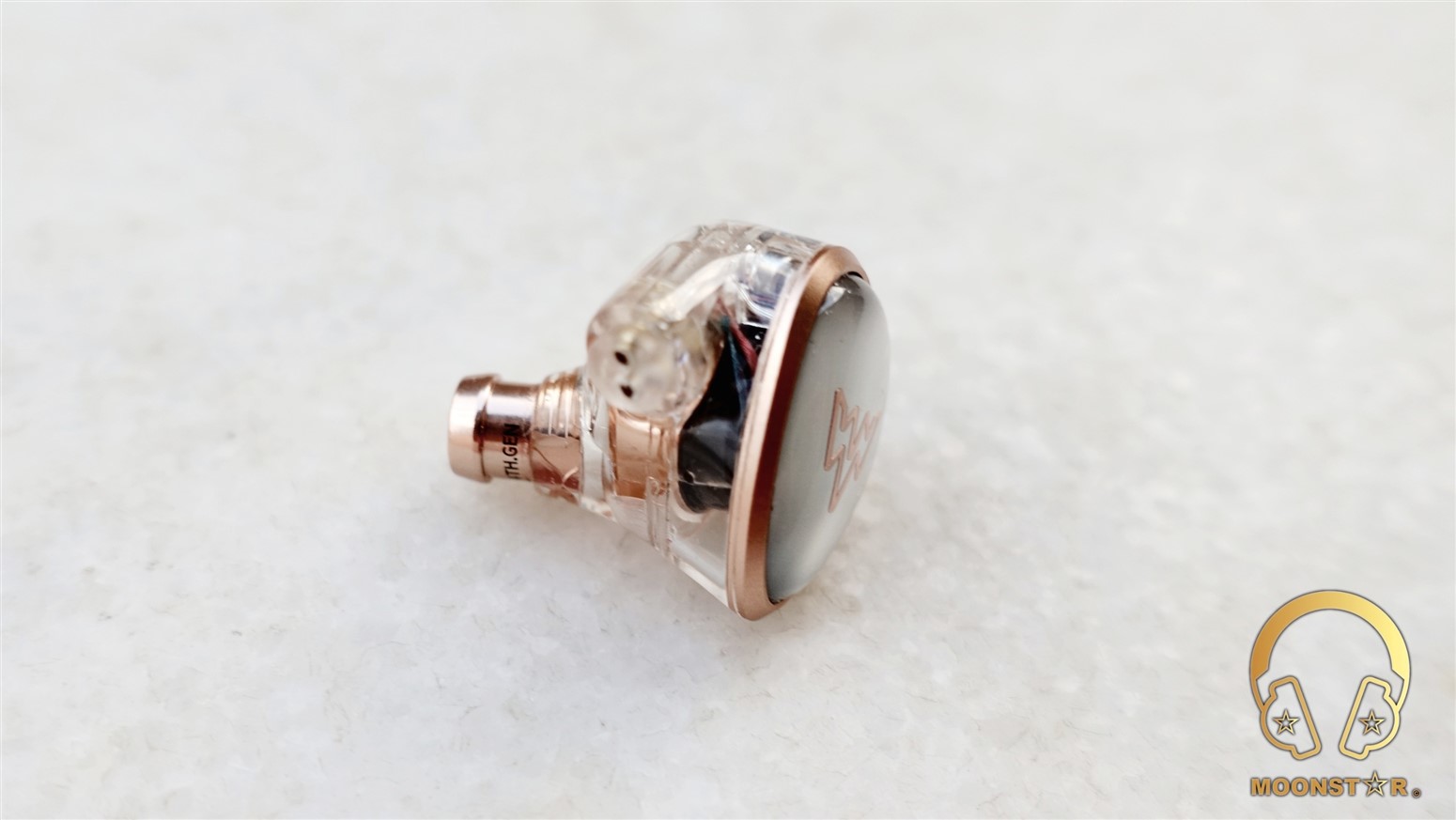 The Whizzer Kylin HE01 has a mildly pronounced and nicely smooth treble character with focal point in the lower treble region. The treble extension is on a moderate level, while the sense of clarity and airiness is on an efficient level. The transitions from the upper midrange towards the lower treble region are in general controlled.

The Kylin HE01 is a quite capable In-Ear Monitor for it price tag in terms of speed and control in the lower and upper treble area, but is missing a slightly bit of resolution, which is quite acceptable for a product at this price range.

What I really like about the Kylin HE01 is that it doesn’t sound aggressive or harsh, while it retrains a good sense of clarity and definition. Instruments like cymbals and bells do sound pretty controlled and pleasant to listen to in Charly Antolini’s song “Duwadjuwandadu”, even in higher volume levels.

The quantity of the treble region is quite enough for jazz music, while the overall presen tation in genres such as EDM or Trance music is controlled and offers enough brightness, without to have any remarkable harshness. 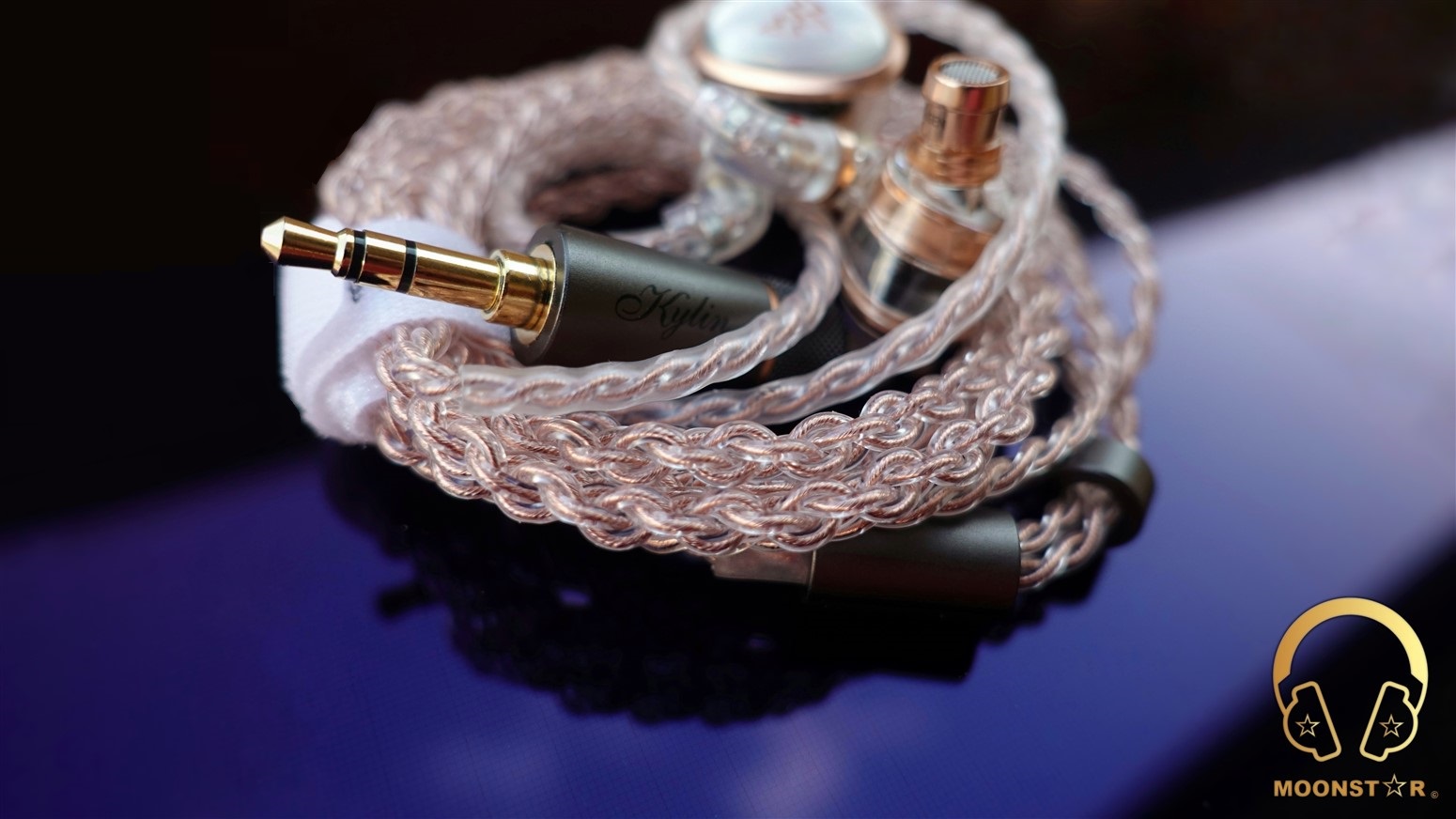 The Soundstage of the Whizzer Kylin HE01 shows an average level of expansion, which is pretty ok for multiple genres such as Rock, Pop, EDM, etc. The stage of the HE01 offers a slightly better sense of wideness than its depth that is on an average level.

Whizzer Kylin HE01 versus FiiO FD1:

The FiiO FD1 is an In-Ear Monitor with a V-shaped sound signature that shows a musical and full-bodied midrange presentation, along with a fast, controlled and deep bass response, and a treble range that is soft and lush in its tonality.

The subbass of the FiiO FD1 shows slightly more depth and extension compare to the Whizzer Kylin HE01, while both are successful in terms of clarity and control in this area. The Kylin HE01 shows a more linear bass response with a bit less of intensity and body in the midbass region, while it is superior when it comes to the general clarity and resolution of the lower frequency area. 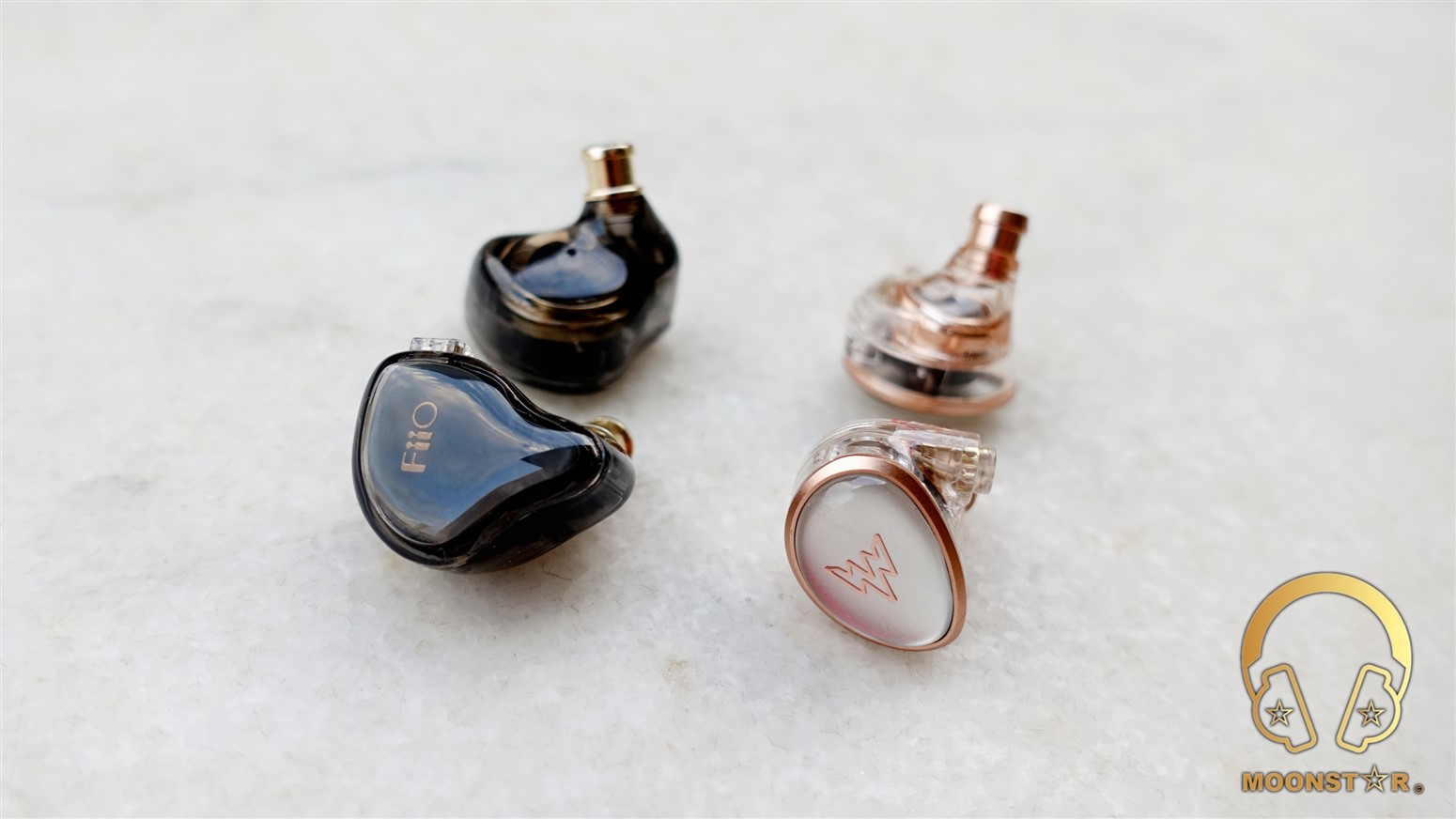 The midrange of the FiiO FD1 shows a slightly warmer tonality compared to the Whizzer Kylin HE01 that has the upper hand in terms of transparency and airiness in this area.

The lower midrange of the FD1 shows a bit more intensity, depth and body, which makes it slightly more successful when I do listen to instruments like acoustic guitars or male voices.

The Kylin HE01 on the other hand shows a more pronounced & energetic upper midrange character, which makes it superior in terms of female vocal, since it offers a better sense of clarity/transparency and detail retrieval in this area.

The treble range of both In-Ear Monitors shows a performance that is above its price range. The Whizzer Kyin HE01 sounds a bit brighter and offers a better level of extension in this area. Both IEM’s are smooth and fatigue free, while the FiiO FD1 has the slightly edge in terms of control and smoothness, while the Kylin HE01 is more successful when it comes to the airiness and definition in this frequency region,

The soundstage of the Whizzer Kylin HE01 is more successful in terms of wideness, while the FiiO FD1 has a slightly advantage in terms of depth.

The MS1 Rainbow shows more subbass rumble and depth, while it is not as controlled and fast like those of the Kylin HE01, which has also the upper hand in terms of midbass control and resolution.

The midrange of the Hidizs MS1 Rainbow shows a warmer tonality compared to the Whizzer Kylin HE01 that has a more natural and transparent presentation. The Kylin HE01 is superior in terms of clarity and resolution. 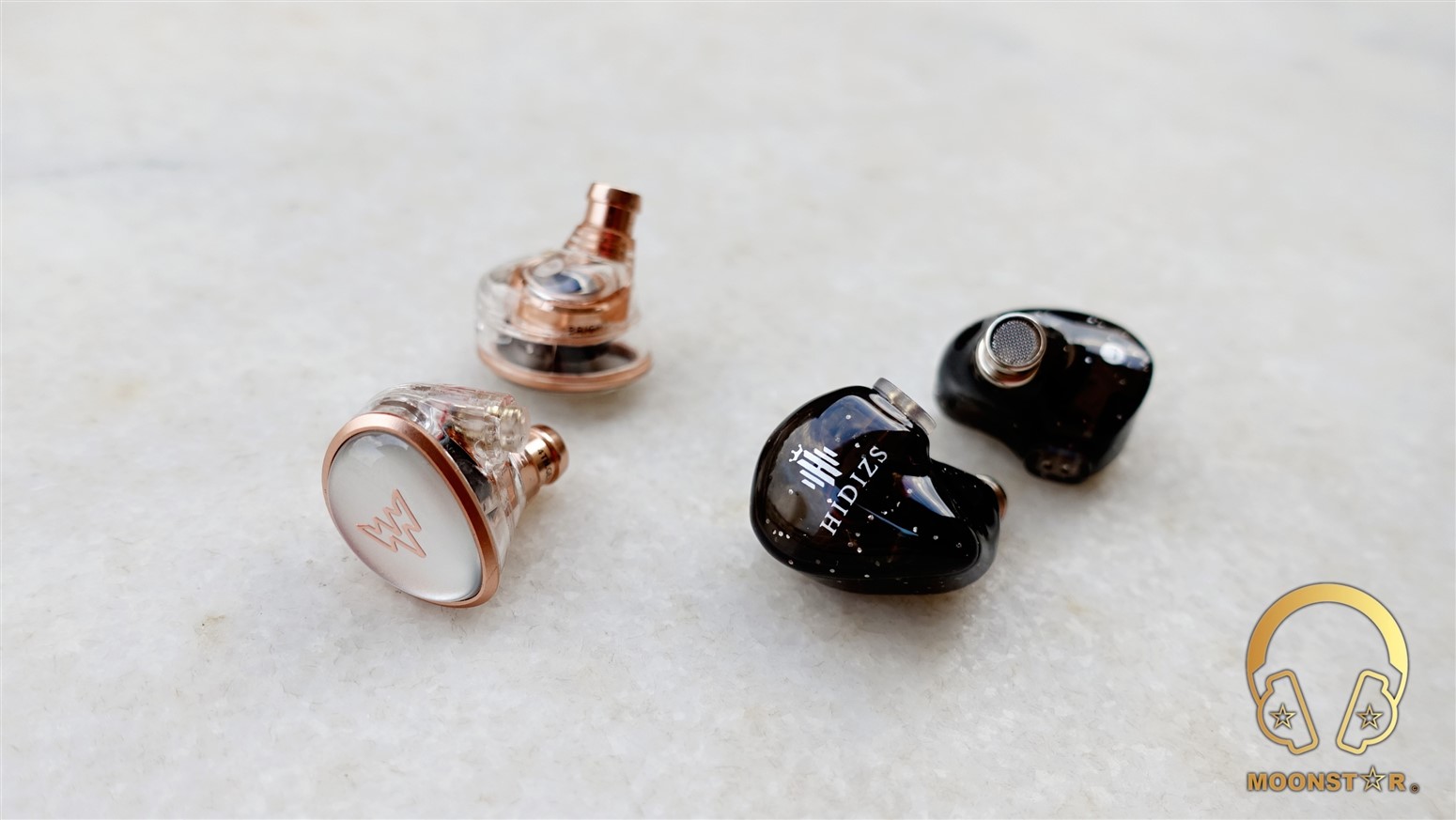 The lower midrange of the MS1 Rainbow shows more intensity, body and depth, which makes it more ideal for Male vocals. The upper midrange of the Kylin HE01 sounds more highlighted and detailed compared to the MS1 Rainbow that makes it more successful with female vocals. The Kylin HE01 has also the upper hand for the separation of instruments and detail retrieval in the midrange region.

The treble range of the Whizzer Kylin HE01 offers a slightly better sense of lower treble definition and clarity, while both are successful in terms of upper treble performance. The Kylin HE01 has the slightly edge in terms of airiness and sparkle that is produced in this area. 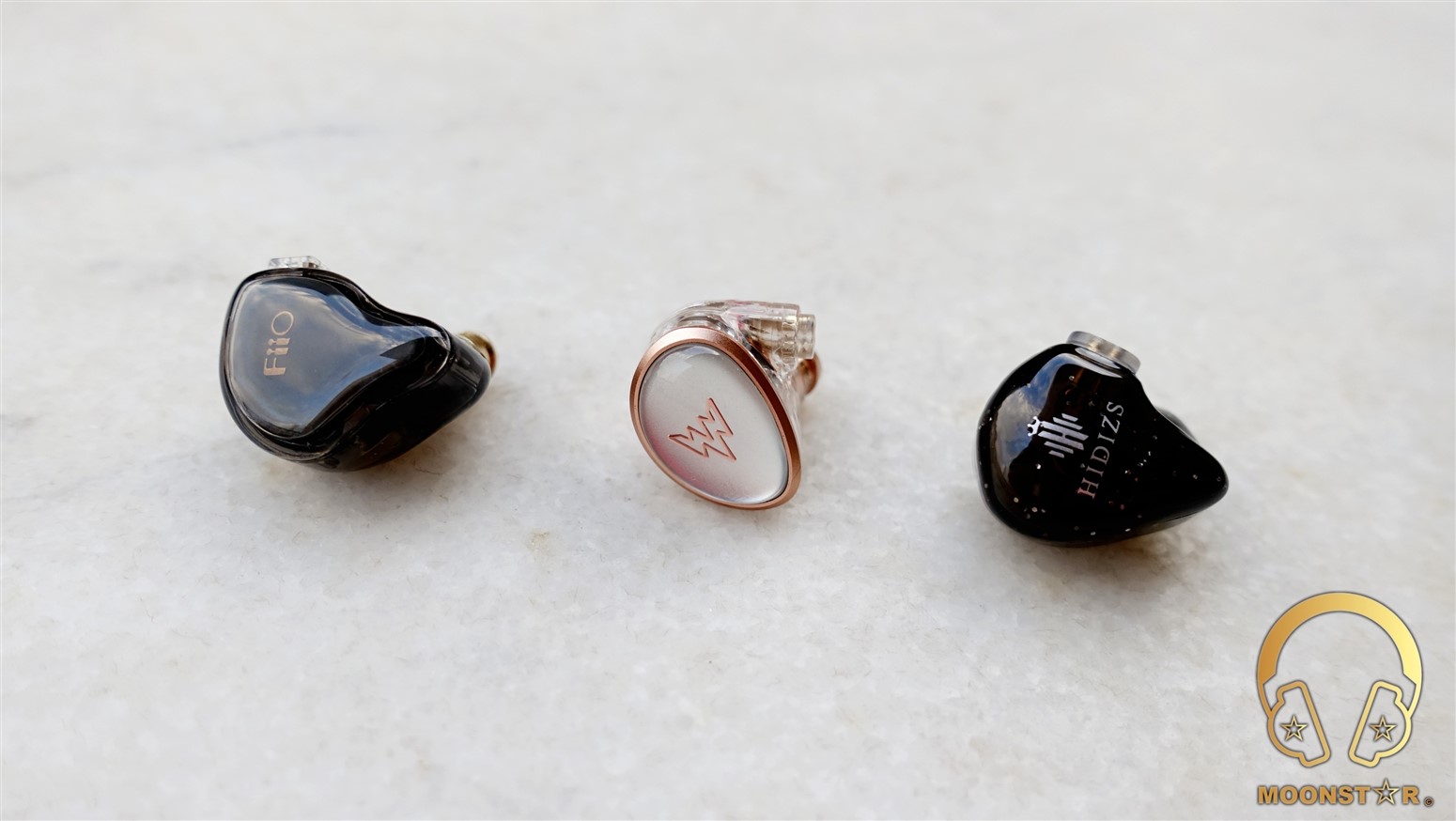 The Whizzer Kylin HE01 is a wonderful looking In-Ear Monitor that offers also a pretty good sound performance, with its quite mature sound tuning that is balanced smooth and fairly detailed for its price range.

Thank You for the Read!